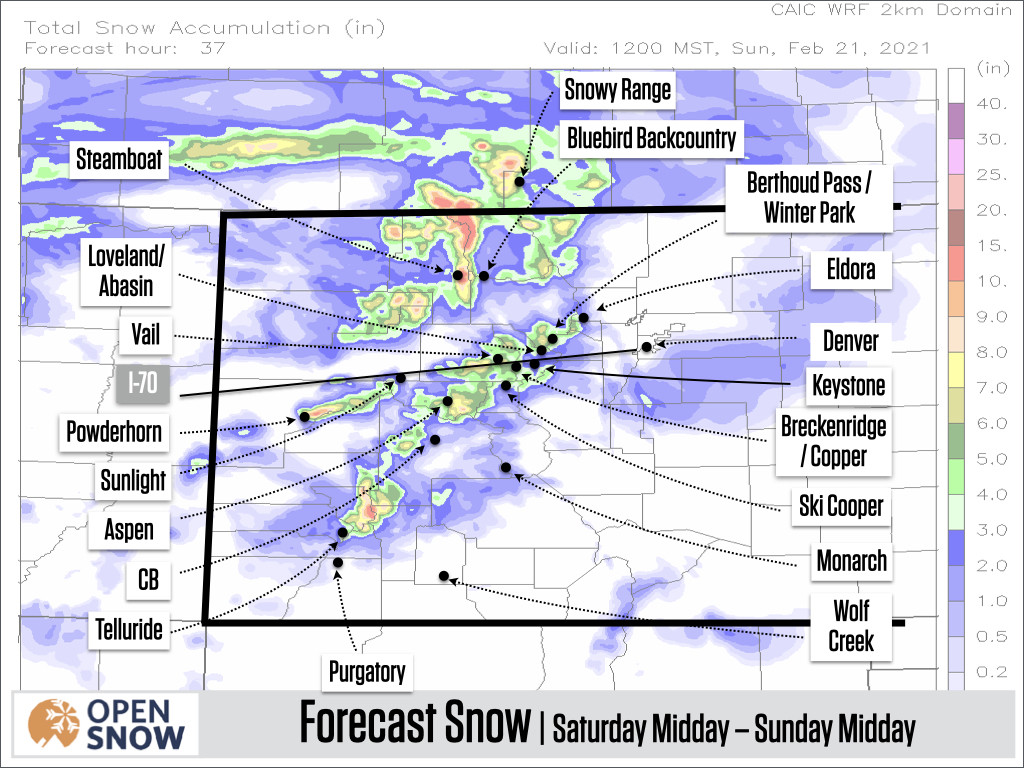 On Friday, the northern mountains saw snow showers with a coating to 2 inches of accumulation. On Saturday, we'll start the day with drier weather, then a cold front will bring a burst of snow during the afternoon and evening with 4-8 inches by Sunday morning. For next week, Monday and Tuesday will be dry, then the next storm will bring snow on Wednesday into Thursday.

Friday's weak storm over the northern mountains materialized about as we expected. Areas near and north of I-70 saw the most flakes with accumulations ranging from just a dusting up to 2 inches for the higher elevations near the divide. Most of these accumulations fell late in the day on Friday and into early Friday night, so there might be a few fresh turns to find now on Saturday morning.

Saturday will start with mostly dry weather, then the next storm will deliver a cold front and a period of intense snow from Saturday afternoon through Saturday evening.

The forecast radar animation below stretches from Saturday morning to Sunday morning. The main feature is the band of intense snow that moves across the state as it stretches from the lower-left to the upper-right (southwest to northeast). This band hits the far northern mountains during the afternoon, areas near I-70 and the central mountains around sunset, and then it pushes into the northern Jan Juan mountains into the evening. After this band moves through, northwest flow will set up and snow showers will continue throughout Saturday night and into Sunday morning.

The latest CAIC WRF 2km high-resolution forecast has dropped snowfall amounts a touch and based on this and other model data from this morning, I think 4-8 inches (rather than 5-10 inches) is the most likely outcome for most northern and central mountains and the north side of the San Juan mountains.

There are two tricky parts to the forecast. The first part is how much snow will fall when the band of intense snow and cold front move through on Saturday evening. With bands like this, snowfall rates can be 1-2 inches per hour, so if the band misses or lingers over certain mountains, there can be a large difference in snow totals. The second part is figuring out how productive the northwest flow is behind the cold front. Northwest flow is finicky and tough to forecast. In this case, with temperatures rapidly cooling to the single digits at higher elevations, that signals to me that we might lack enough moisture to create a lot of snow out of the northwest flow.

To wrap up, expect the most intense snow from Saturday afternoon through Saturday evening with snow showers lasting into Sunday morning. Accumulations should be 4-8 inches for most mountains, and the best chance of enjoying powder will be on Sunday morning.

Monday and Tuesday will be mostly dry days with warmer weather. The only wrinkle in the forecast is that we may see snow showers linger over the far northern mountains on Monday.

Wednesday and Thursday are when we'll see our next chance for snow. I still think this storm will favor mountains near and east of the divide and maybe the southern mountains as well. If all factors align, perhaps there will be moderate snow totals later Wednesday and/or Thursday morning.

Then we'll have another chance for snow on Friday, Saturday, and/or Sunday (February 26-28). Models are split as to whether these days will bring a lot of snow or a little snow and it depends on whether the active weather pattern sets up near or just west of Colorado, or if stays farther to the north and quickly moves to the east rather than lingering over us. It'll take a few more days for us to figure out the details.