Fall colors are out! Then the weather will change Sep 28-30. 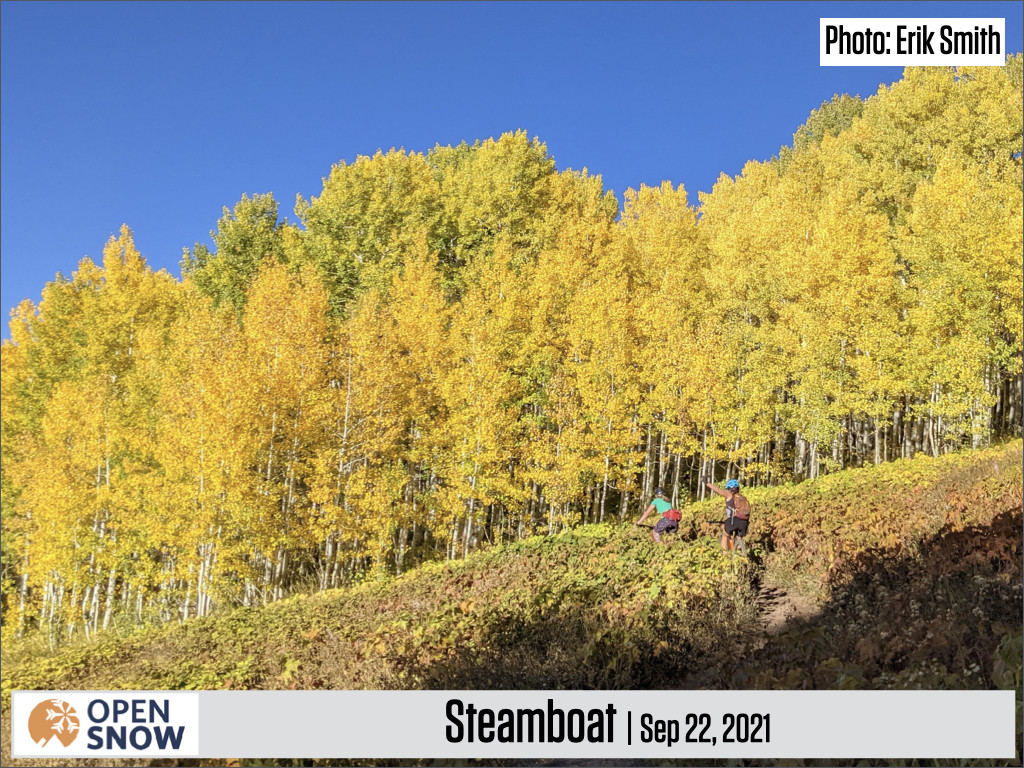 Thursday through Monday will be mostly dry and warm with gorgeous fall colors across a lot of the state. Changes will arrive next week when we'll see an increase in showers with the highest likelihood of rain (and some snow) centered around Wednesday, September 29th. 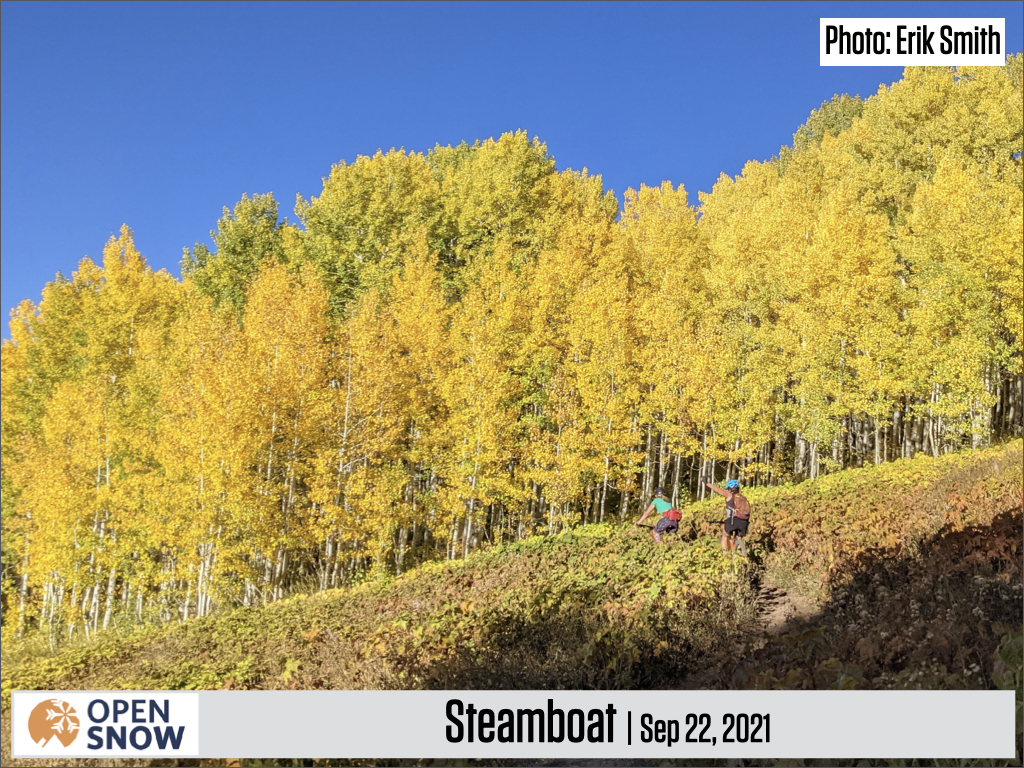 The peak of fall color is usually around this upcoming weekend (September 25-26) in the northern and central mountains and roughly a week later in the southern mountains. There will be a lot of people out enjoying the leaves during the next 7-10 days and for good reason – it's an amazing time to be hiking and mountain biking through the forests of Colorado!

There will be two weather items to keep in mind through the end of the week.

The first weather item is that now, on Thursday, there is a bit of smoke in the atmosphere creating a haziness in the sky. You can see this by looking outside:-) and also via our OpenSummit Smoke (Sky) map for Thursday morning. The Smoke (Sky) map is available on OpenSummit.com and our OpenSummit iOS and Android apps. We have also ported these map layers over to OpenSnow.com and the OpenSnow iOS and Androids apps. 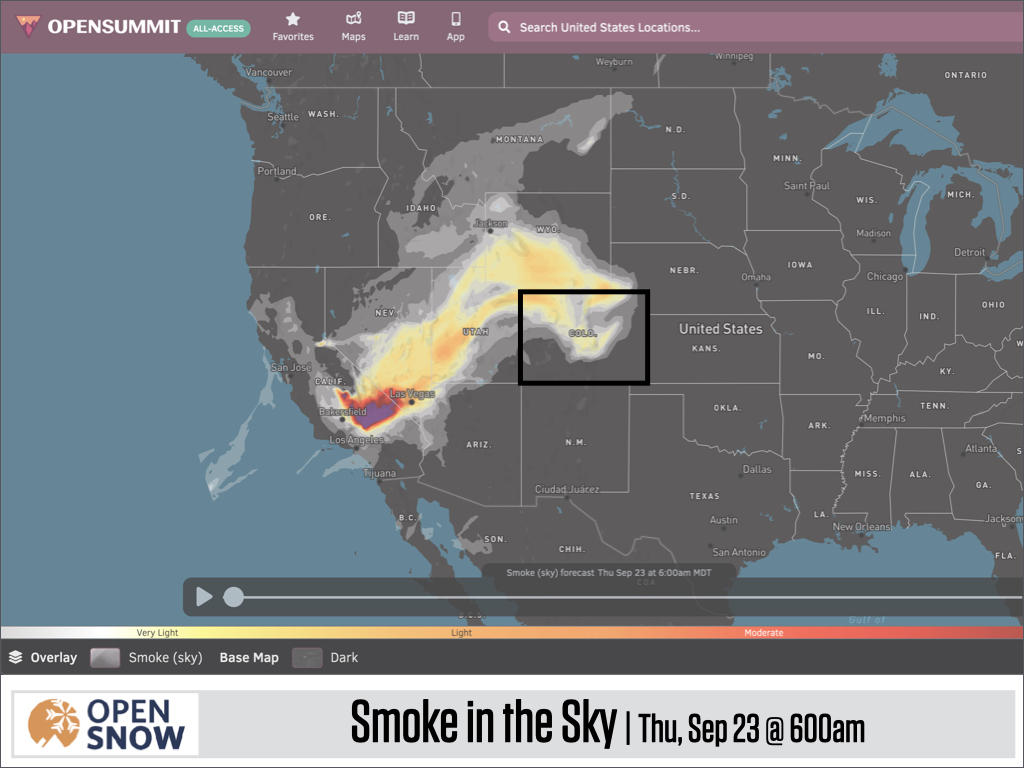 By Friday afternoon, this smoke in the sky is forecast to move away and we'll see a return to mostly clear skies. 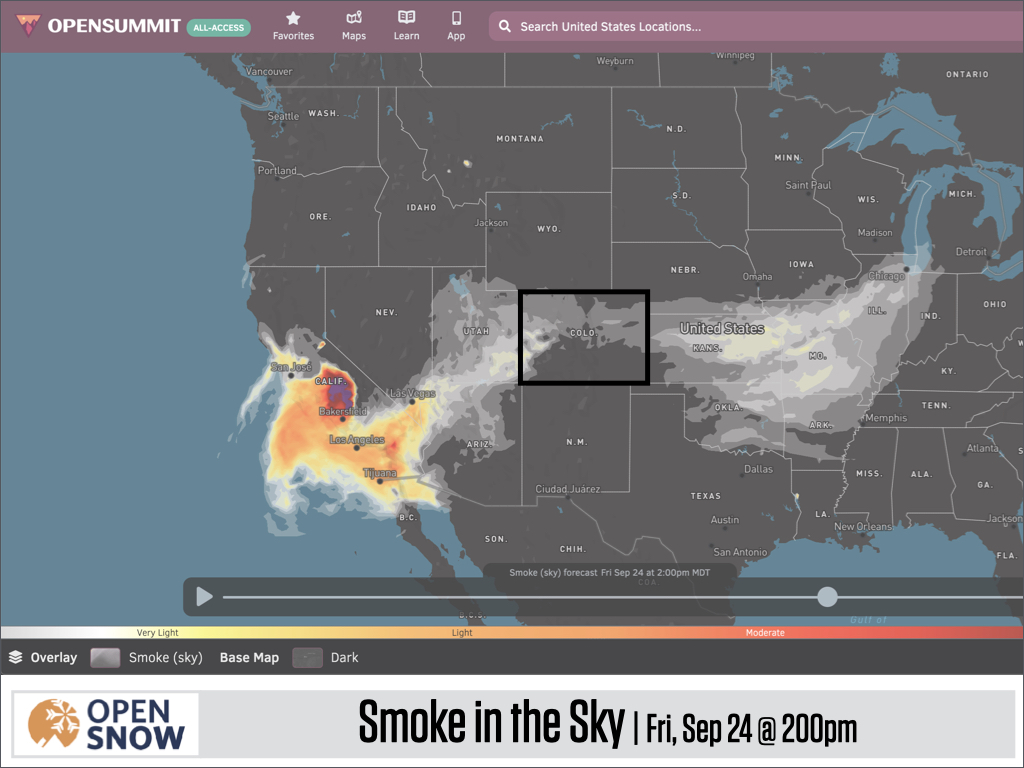 The second weather item to keep in mind is that there will be a few showers over the higher peaks on Thursday afternoon and Thursday night. This is NOT a big deal and most areas will stay dry, though I can't rule out a few raindrops and high-elevation snowflakes.

The weather forecast for next week will bring some changes.

From Monday, September 27 into Tuesday, September 28, we'll see a slightly higher chance for showers, which will mostly be in the form of rain due to warmer temperatures.

Then from about Tuesday, September 28 through Thursday, September 30, we will see a high chance for rain and high-elevation snow showers. All models show that an incoming storm from the west will pull moisture into Colorado from the south. A few models forecast lighter amounts of rain and snow, a few models forecast the chance for significant amounts of precipitation, and of course, some models are in the middle.

The takeaway is that next Tuesday through Thursday will likely be wet (and a little snowy) which is different than the mostly dry weather that we will have experienced for most of the end of September. 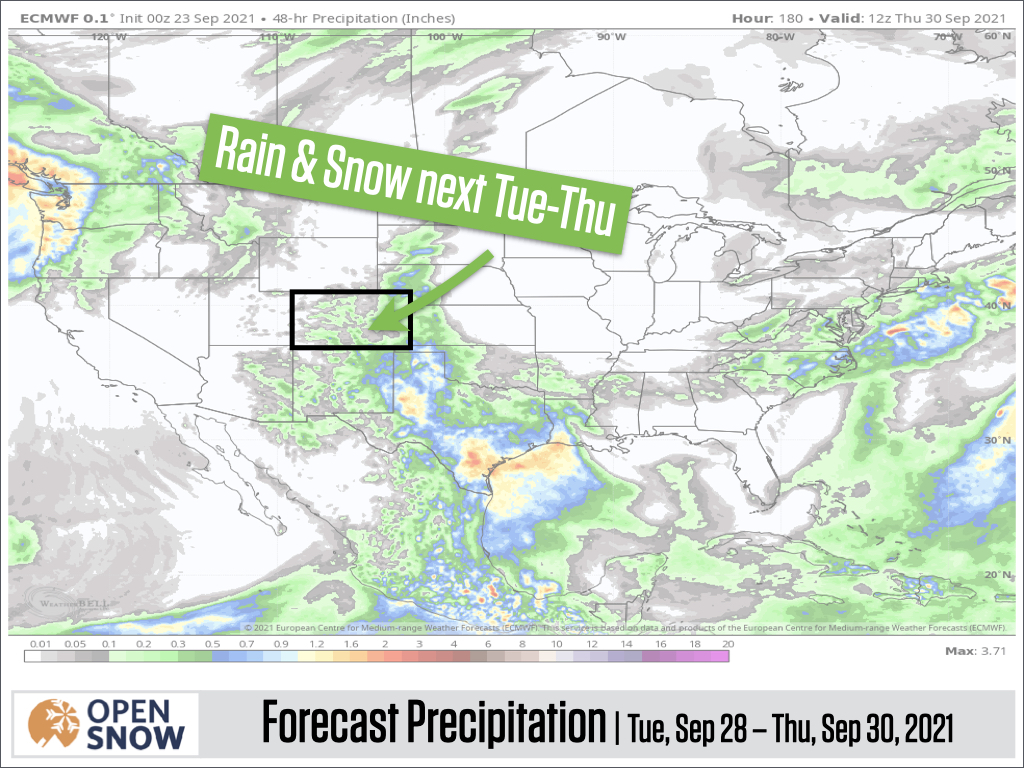 Will next week's storm bring much snow?

Probably not. Temperatures will generally be warm with any snow likely confined to the highest elevations, above 10,000-12,000 feet. 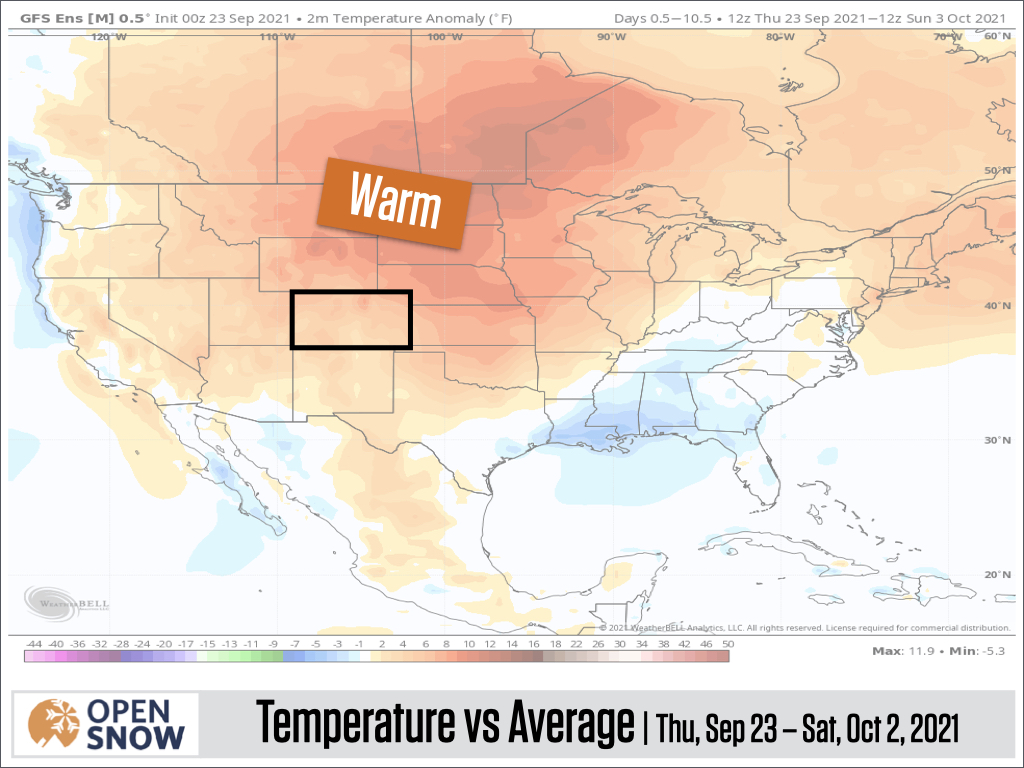 If the storm happens to be strong and/or make a more direct track over Colorado, the snow level during the middle of next week could come down, but that's not the most likely scenario right now.

We are in the time of year where any precipitation can fall as snow at the highest elevations, so I would not be surprised to see white-colored peaks at some point during the middle of next week, but again, the likelihood right now is that next week's precipitation will be warm and mostly rain with just some snow on the higher peaks.

When will we see more cold and snowy weather?

Probably not through at least early October. We can roughly trust forecast trends out to 10-15 days, and at this lead time out through early October, I do NOT see any strong chances for a cold and snowy storm.

In the meantime, enjoy the gorgeous fall weather during the next few days, and I'll write another post on Monday, September 27 with an update on the rain and snow chances for the middle of next week.