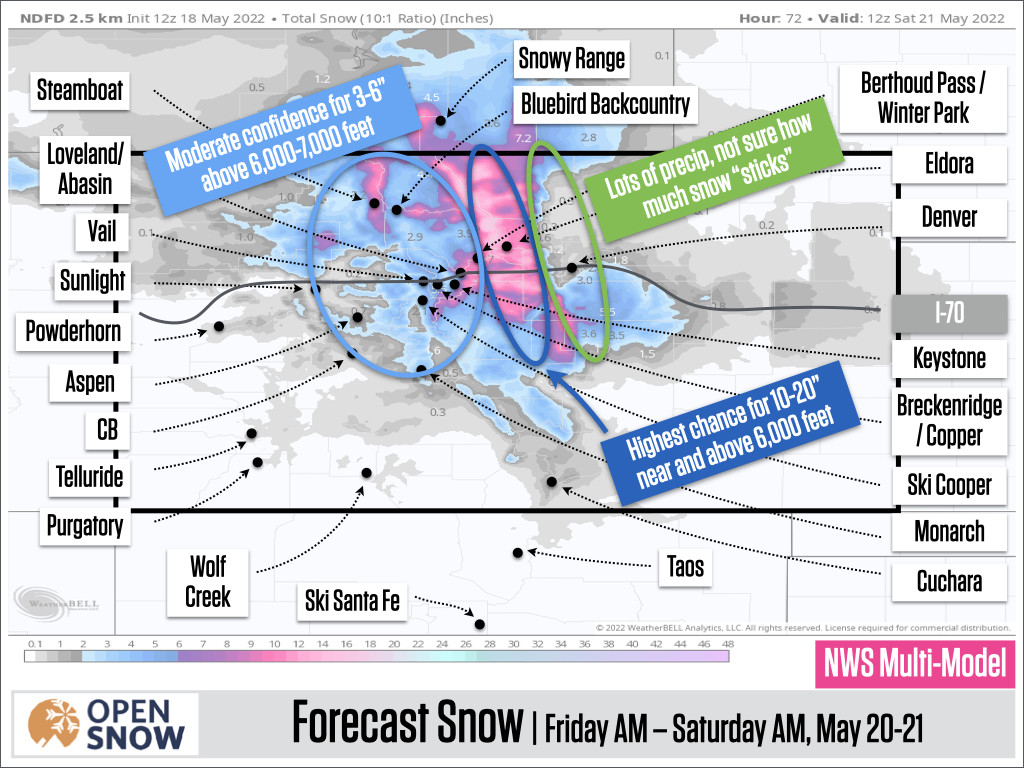 A legitimate winter-like storm will bring cold temperatures and snow from Friday, May 20 to Saturday, May 21, and snow totals could be greater than 10 inches along the northern divide.

But, a significant storm is en route and the snow potential is high enough that I dusted off the weather models and wanted to post an update.

All models agree that we'll see cold air arrive on Thursday night with snow possible from sometime on Friday through sometime on Saturday.

Here's the multi-model snow forecast from Friday through Saturday morning. 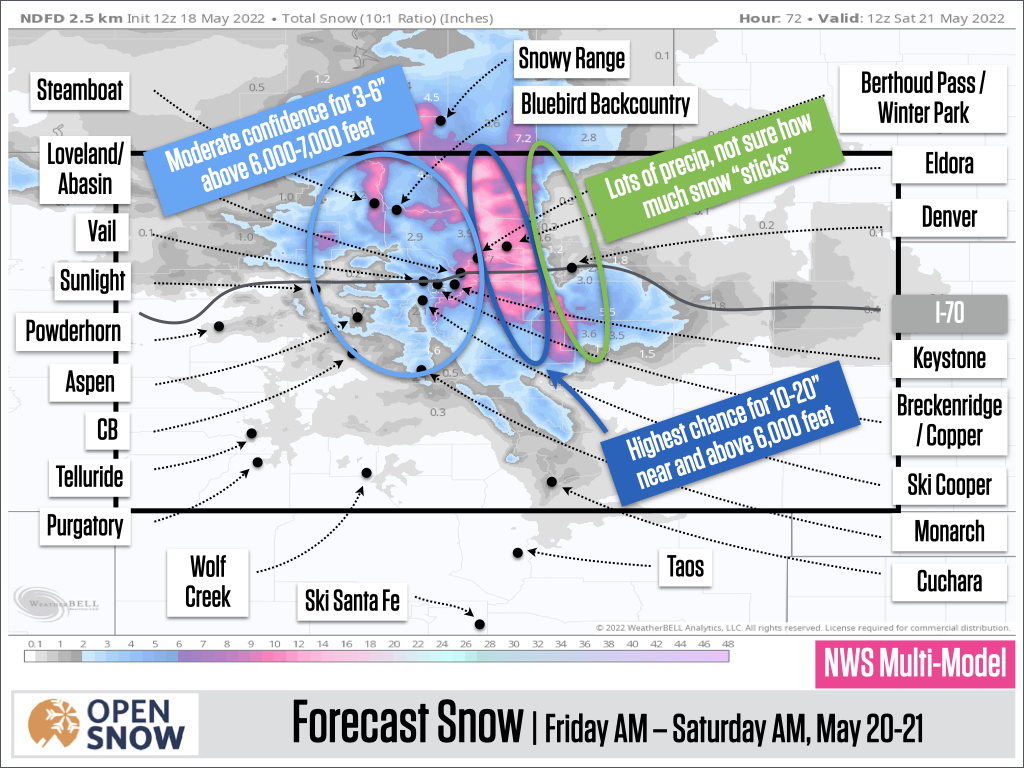 The mountains west of the divide could see 3-6" (or more) of snow above 6,000-7,000 feet, and I have only moderate confidence in this and we'll likely not know the area that could get the most snow until later on Thursday.

The foothills near and just east of the divide could see 10-20" (or more) of snow above 6,000 feet, and I have pretty high confidence of this though the exact bullseye of the most snow could be anywhere from Cameron Pass in the north to the Pikes Peak region to the south. This high amount of snow will be a product of the energy of the jet stream at 30,000 feet helping to lift the air in combination with a wind from the east near the ground that will also help to lift the air. This is a pretty classic "upslope" scenario, though the exact placement of the jet stream will determine which area will see the highest snow totals, and again, we likely won't have higher confidence in this until later on Thursday, just before the storm arrives.

The plains and cities in the greater Denver area will see a lot of precipitation with likely some snow, especially over the higher elevations closer to the foothills and along the Palmer Divide south of Denver and north of Colorado Springs. It's tough to know how much snow will stick to the ground in these areas as temperatures will be close to freezing, so the big story here will be cold temperatures and healthy precipitation with some snow accumulation possible, especially on the grass and trees.

From a skiing and riding perspective, Mary Jane (a part of Winter Park) will be open through Saturday, May 21st, and Arapahoe Basin continues to be open daily, so there could be powder to enjoy at both places on Saturday, May 21st. That said, I think the best chance for the highest snow amounts will be east of these locations, east of the divide, and west of the plains, centered on the foothills between 6,000-10,000 feet.

From a driving perspective, roads in the plains (greater Denver area) should be just wet due to the warm ground and high sun angle. Roads in the foothills between 6,000-10,000 feet, including I-70 from Morrison through Georgetown or even the Eisenhower Tunnel, could be full-on snow-packed with real winter driving conditions.

After this storm on Friday into Saturday, there's a chance for another shot of chilly air and some snow on Sunday into Monday, but the Sunday/Monday system is less certain and also will likely be warmer and not as strong as the Friday/Saturday storm, so it'll be something to watch for but not a repeat of the significant event that's coming on Friday/Saturday.

If the forecast for the Friday/Saturday storm changes significantly, I will post again with an update. Otherwise, be sure to check out our continually updated, multi-model point forecasts as the storm gets closer (like for Rocky Mountain National Park), and you can also see my season summary post from April 26.

Enjoy the snow and precipitation as we will always welcome every drop and flake!

And thanks for reading!