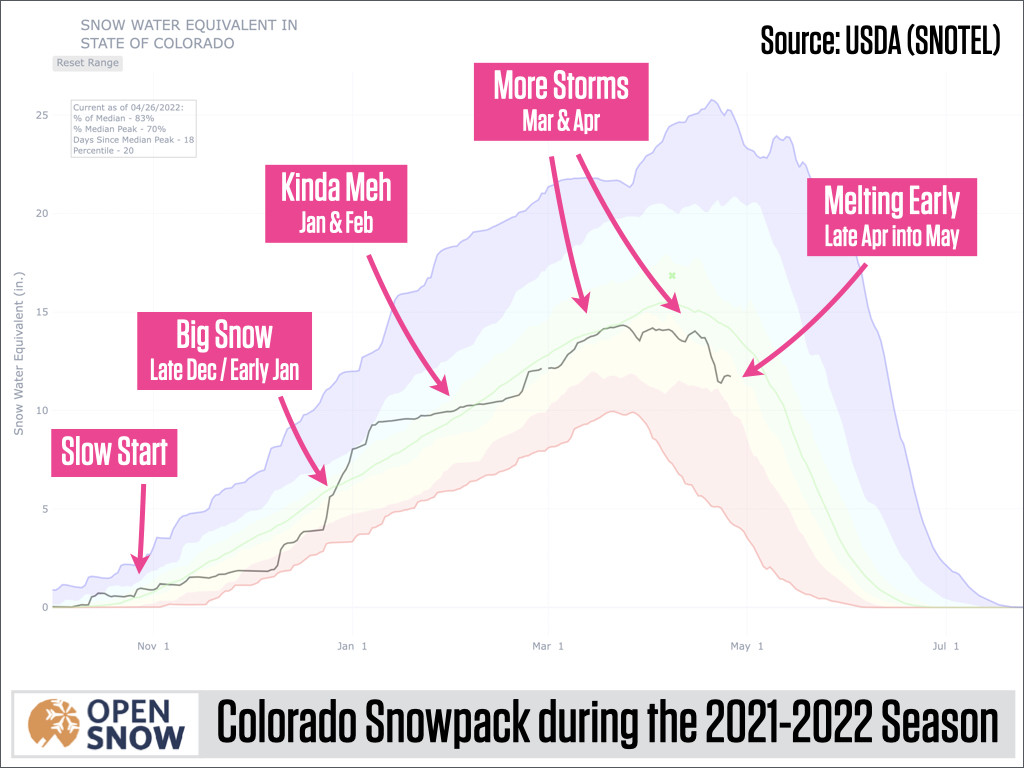 It was a season of ups and downs with a slow start, a remarkable comeback just before the new year, a pretty slow January and February, then a ramp-up to end the season. There were dry and frustrating periods, there were deep powder days, and most importantly, we all got out to ride. Thanks for reading, and best wishes for a wonderful spring, summer, and fall!

Our forecasts will continue to be updated hourly so that you can continue to plan your powder/corn/tailgates appropriately. This is Colorado after all, and it will snow into May and perhaps later.

Also, check out our other summer-focused service, OpenSummit, to plan your hiking/biking/climbing adventures throughout the warmer months.

And if we have to deal with wildfire smoke this summer, remember that both the OpenSnow and OpenSummit apps and websites have a real-time air quality map as well as smoke forecast maps going out up to 48 hours in the future.

The graphic below shows the snowpack across Colorado thanks to a network of about 115 government-run snow sensors called SNOTEL. These sensors are located between about 8,000-11,000 feet in elevation and report hourly snow measurements.

The snowpack starts at zero in the bottom-left corner on October 1, increases throughout the season, and usually peaks in early April before melting out to zero in June on the bottom-right corner. 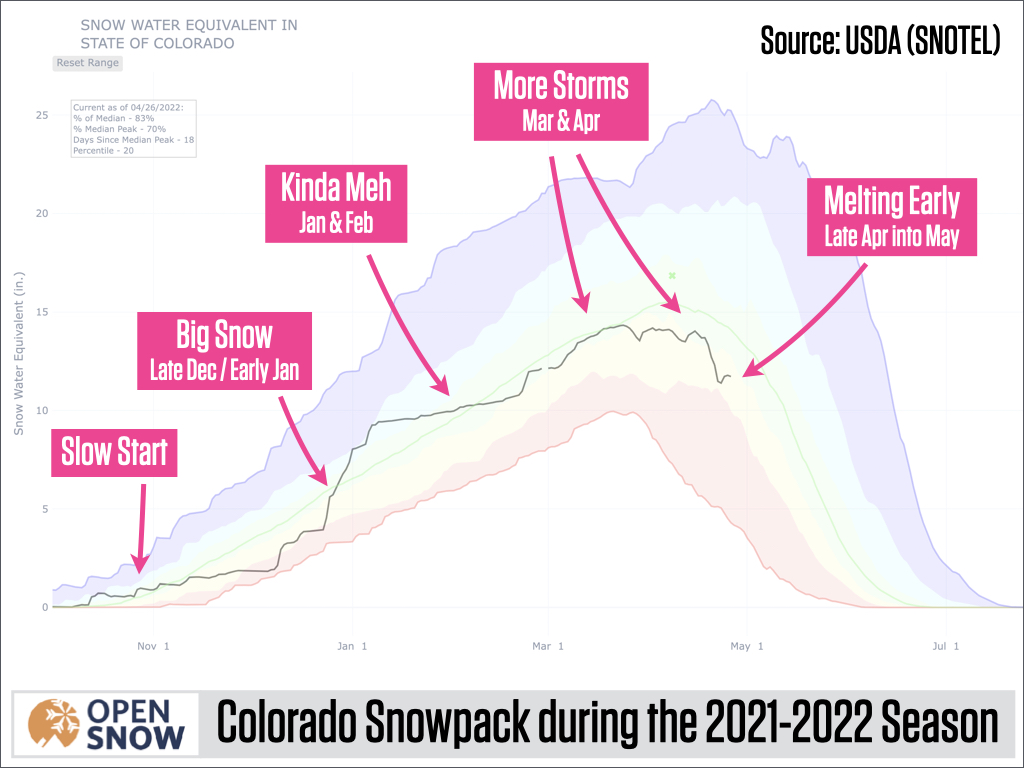 We started the season off slowly. When the black line is flat, that means we saw very little or no snow.

Then the comeback arrived just in time for the end of December busy holiday period with the snowpack zooming from well below the median to well above the median in just about two weeks.

In January and February, the black line was pretty flat, which mean a dearth of big storms across the state. During this time, there were storms, and there were powder days, it was just, on average for all mountains, not a very active time.

It appears now as I write this on April 26 that we are heading for a snowpack melt-out that will be earlier than the median as the black line is already to the left of the green line.

For the season as a whole, I could call it 'ok'. It could have been worse, it could have been better, and there were memorable powder days for the northern, central, and southern mountains.

Below are two photos that came to mind when I thought about the season.

The first photo was from Steamboat on March 9, 2022, after about two feet of blower powder fell overnight and into the morning. When I think of a deep powder day, this is the type of image that I keep in my mind. See the full movie clip from Vicente Katz here. 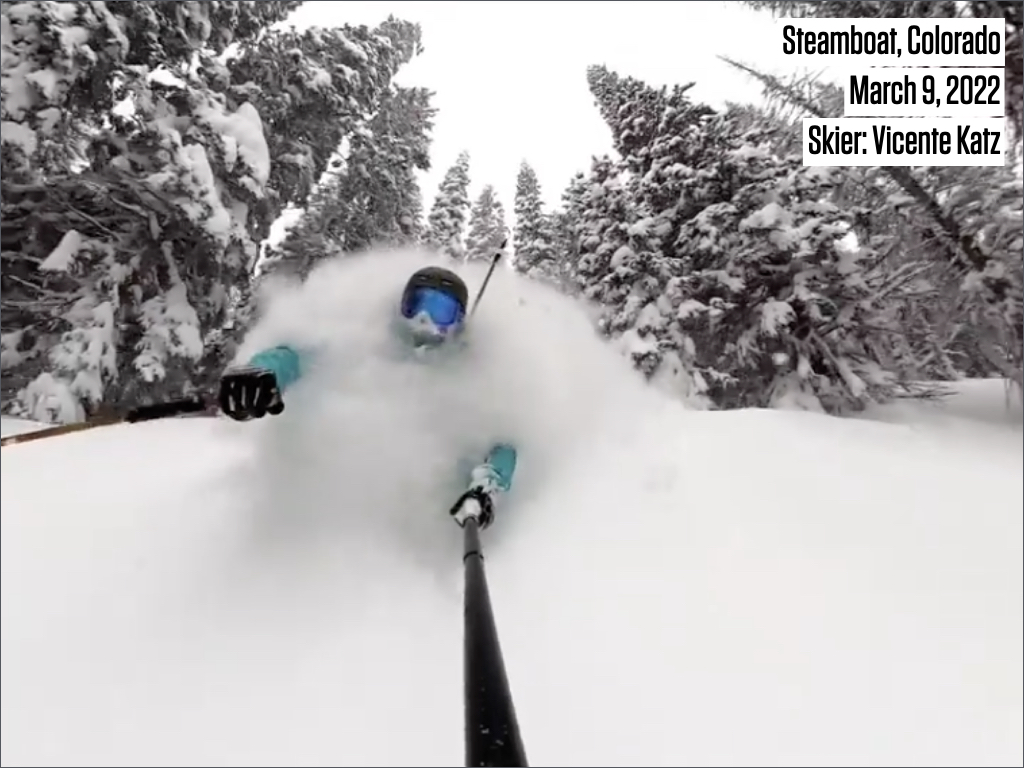 The second photo is a personal one. It shows my son (left, 4 years old) and his friend (right, 6 years old) when they rode the lift by themselves. These kiddos had a blast choosing their own lines and feeling the freedom of sliding on snow, and I think it's these feelings of independence and exploration that connects most of us to the sport. 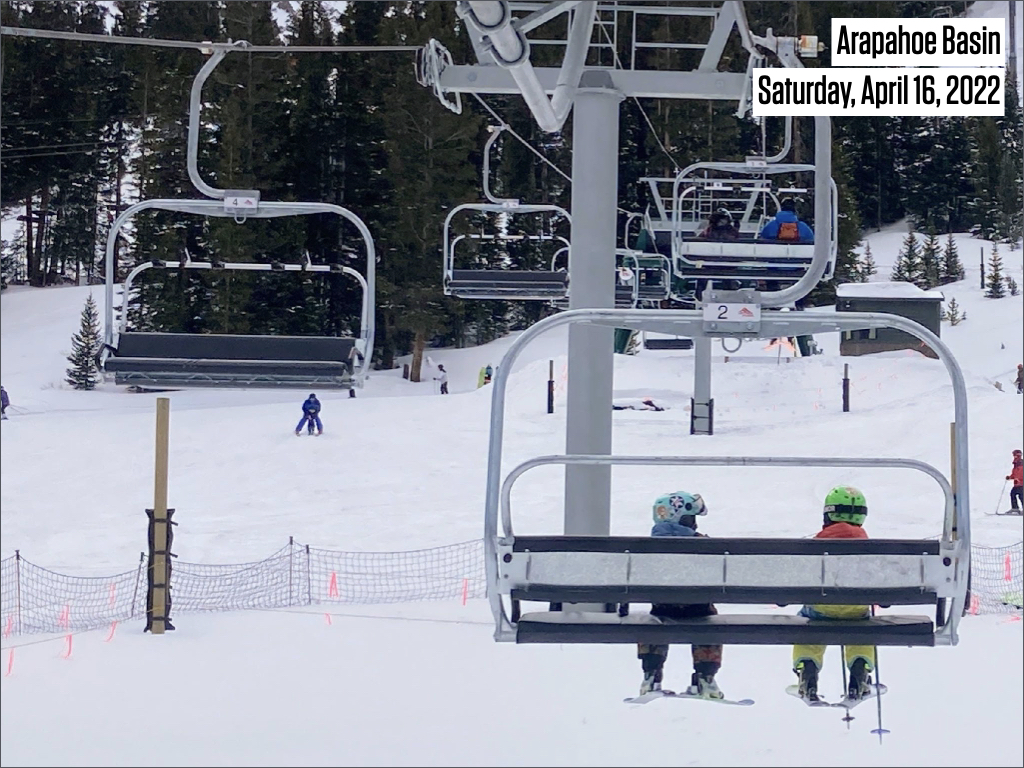 I hope that you have a wonderful spring, summer, and fall, and again, THANK YOU for reading the Colorado Daily Snow this season, during previous seasons, telling your friends about OpenSnow, and more generally, for loving snow and skiing and riding as much as myself and our entire team do!

PS – Even though the Colorado Daily Snow will not be updated until the fall of 2022, all of the forecast data and maps on OpenSnow and OpenSummit will continue to be updated hourly (or every few minutes for radar data). Also, keep your eye on both services and your email as we'll be announcing a significant new feature in spring or early summer!