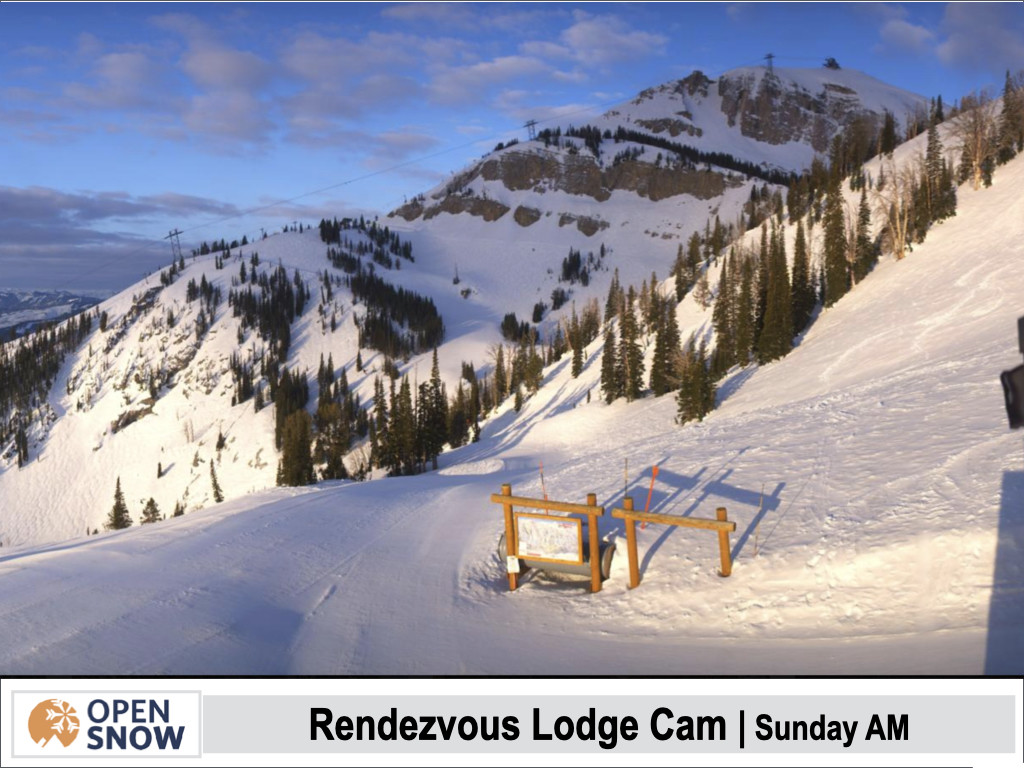 The final day of the season will feature clearing skies and lighter winds, but chilly temperatures by April standards. A cool and unsettled pattern will prevail over the upcoming week but snow amounts will be light. This will be my last daily post of the season. Stay tuned for a season recap later this week.

Temperatures are starting out cold on Sunday morning with lows in the single digits on the upper mountain, teens at mid-mountain, and 20s at the base.

Scattered clouds in the morning will give way to mostly sunny skies during the afternoon with highs in the mid-20s on the upper mountain.

Plan on sticking to the groomers in the morning given the cold/hardpack conditions. While Sunday afternoon's temperatures will be colder than average for this time of year, the sun should soften up south-facing and more exposed aspects in the afternoon to allow for better oft-piste conditions.

Winds are not as strong compared to Saturday but still a bit brisk early on Sunday morning. Short-range models are projecting winds to continue to decrease as the day progresses, so that is good news. 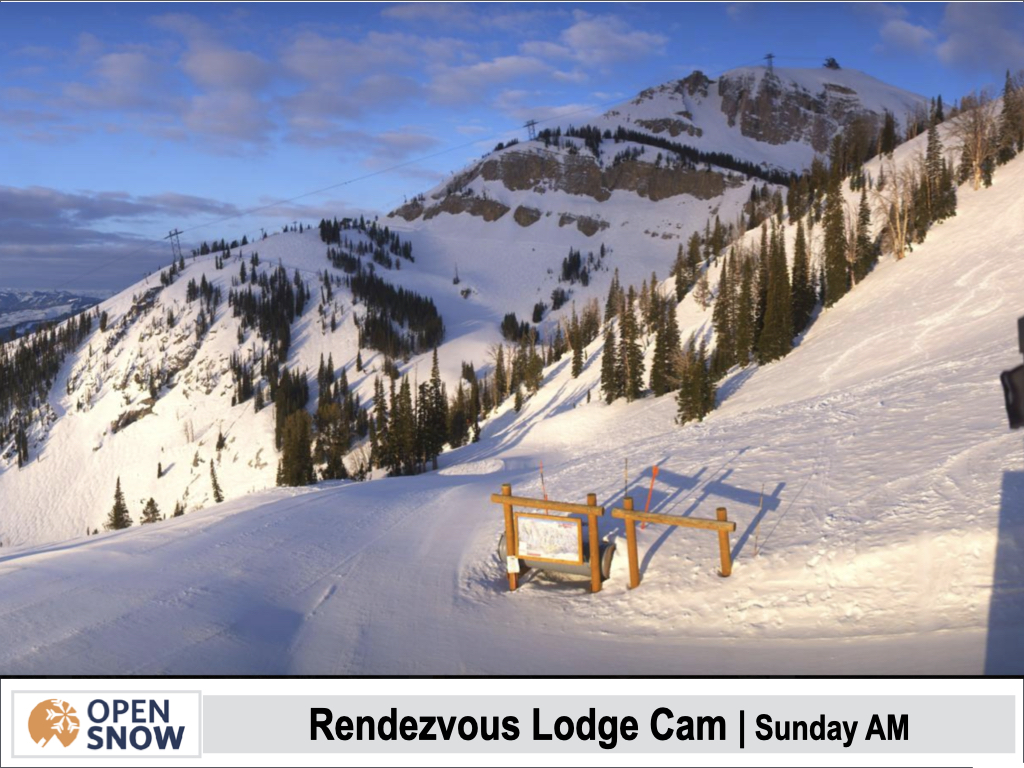 For the upcoming week, a minor disturbance sliding in from the northwest will result in scattered clouds and maybe some occasional flurries on Monday and Tuesday, but the prevailing wind direction will be unfavorable out of the east so I wouldn't expect much snow.

Temperatures will be running colder than average on Monday and Tuesday with highs struggling to reach the freezing mark above 9,000 feet.

A cut-off low pressure system will set up west of the Tetons on Wednesday before eventually swinging east and dipping south into Colorado late in the week. This will continue to result in unsettled weather and colder than average temperatures but is not a pattern that will be a big snow producer for Jackson. 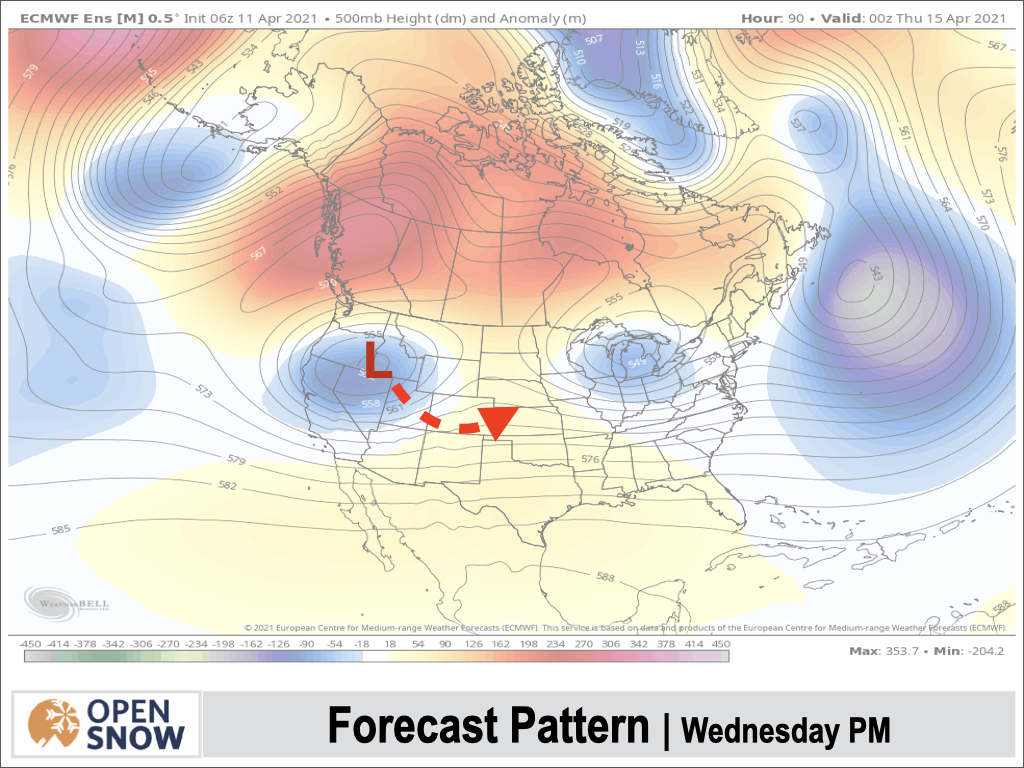 Clouds will increase on Wednesday but winds are projected to be out of the southeast – i.e. unfavorable for Teton snow, so I would only expect light snow showers or flurries as a result.

On Thursday, the main area of low pressure will swing east and we could see a period of more favorable westerly winds. As a result, there is a better chance of seeing more meaningful snow accumulations on Thursday compared to the rest of the week – maybe a few inches or so.

Snow levels will remain near the valley floor for most of the week, except on Wednesday when it could be just warm enough for rain to mix in with snow showers in the valley.

Here is a blend of model-projected precipitation over the next 7 days. Areas south of Jackson Hole along with areas along and east of the Continental Divide in Wyoming will see most of the moisture from the upcoming pattern, with only light amounts for the Tetons. 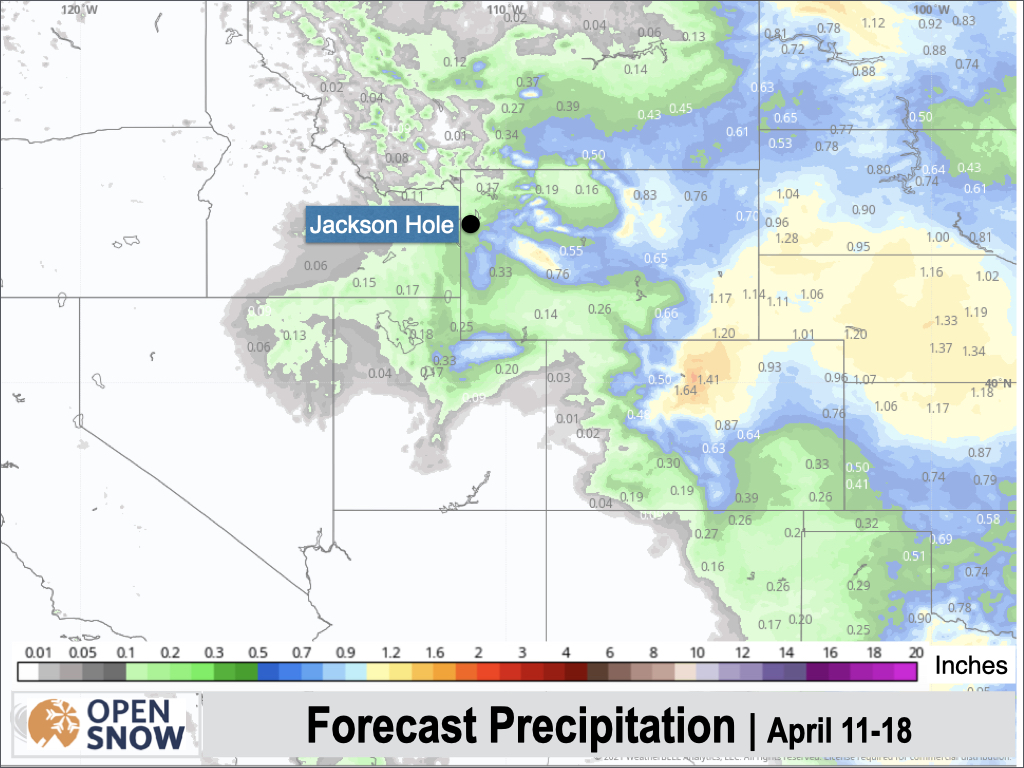 We should start to see a drying trend next weekend with lingering cool/unsettled conditions and a chance of light snow showers on Friday (4/16) giving way to decreasing clouds and warmer temperatures on Saturday and Sunday (4/17 – 4/18). There is still a bit of uncertainty for this timeframe given recent model performance, but as of now, this is where we're trending.

The warming/drying trend should continue through at least April 21st. We may see a system sneak in at some point in the 11-15 day timeframe (April 22nd-26th) but the pattern doesn't look conducive for significant moisture.

This is my last daily forecast of the season. Thank you so much for reading this winter! I'll be posting a season recap along with a brief weather update this Thursday, April 15th.

Snow conditions as of Sunday morning: