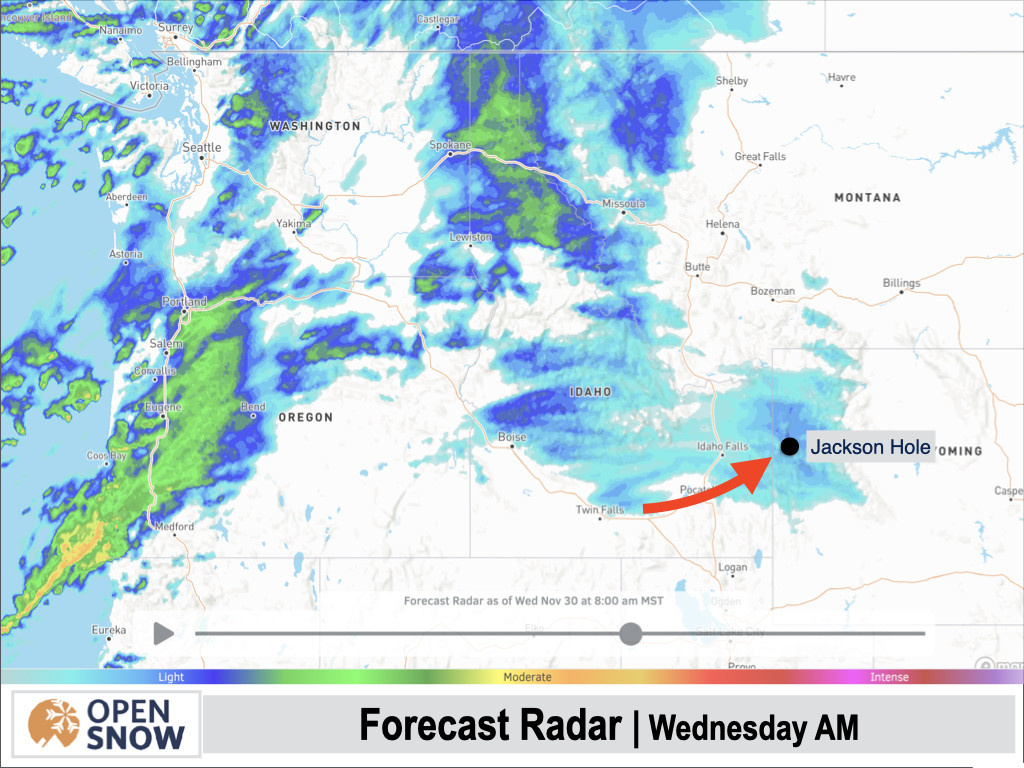 An active pattern will continue for the rest of this week with near daily rounds of snow. Light to moderate snow showers can be expected on Tuesday & Wednesday (adding up nicely over time), then a stronger storm will bring heavy snow on Thursday & early Friday with the deepest conditions expected Friday. Additional snow chances can be expected Sat night to Tues but low confidence in the details.

Snow totals from the Sunday-Monday storm were all over the map, and in some cases a little bit lower than I forecasted, but overall it was a good storm for both the Tetons and the Jackson Hole Valley. More specifically, Targhee snowfall came in on the lower side of the forecast, while Snow King and the Town of Jackson came in on the higher side where a localized band of heavy snow set up.

Arctic air filtered into the region behind Monday's storm, and we are waking up to temperatures slightly below zero both in the mountains and the valley on Tuesday morning. However, a little bit of moisture associated with a weak disturbance is resulting in cloudy skies and light snow showers on Tuesday morning.

More of the same can be expected throughout the day on Tuesday with off and on snow showers and flurries along with cloudy skies, low visibility, and cold temperatures. High temperatures on Tuesday afternoon will barely get above zero at 9,000 feet and will only reach the low teens in the valley. Moderate west winds can also be expected, which will make it feel even colder.

Late Tuesday night, a somewhat stronger disturbance will approach from the southwest, and snow shower activity should pick up a bit after midnight as a result.

Snow Totals: I'm expecting another 1-4 inches in the Tetons by Wednesday AM reports, while the valley will pick up anywhere from a dusting to an inch.

A strong storm will impact the Pacific Northwest on Wednesday, while a leading edge disturbance arriving from the southwest will result in somewhat of an uptick in snow showers across the Tetons on Wednesday compared to Tuesday. 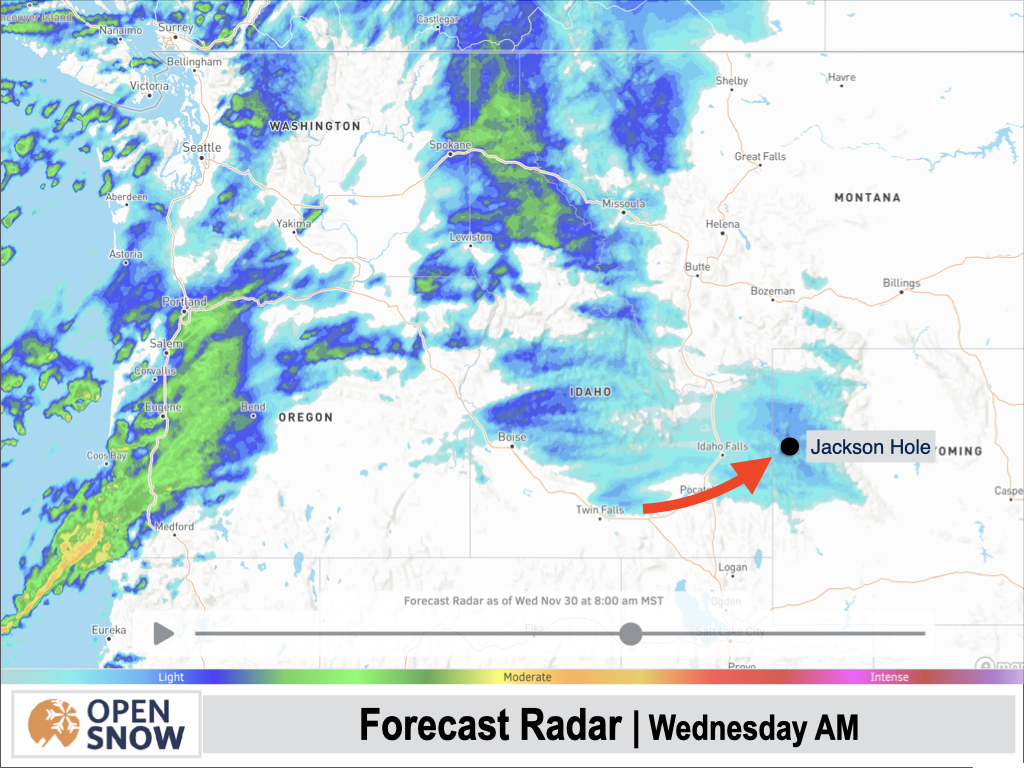 Warmer air will also arrive from the southwest on Wednesday and arctic air will retreat to the north, allowing temperatures to moderate a bit from Tuesday's chilly values. Highs on Wednesday will reach the teens at 9,000 feet and 20s in the valley, which is still cold enough for good-quality powder snow.

I expect the bulk of Wednesday's snow shower activity to occur during the daytime hours, but we will see some snow showers on Wednesday night as well.

Snow Totals: I'm expecting the Tetons (above 8k) to pick up an additional 3-6 inches of snow on Wednesday-Wednesday night, bringing 2-day snow totals to 4-10 inches for Tuesday & Wednesday. Skiing conditions will be good on both Tuesday and Wednesday thanks to consistent daily refreshes.

The Jackson Hole Valley will pick up an additional 0.5-2 inches on Wednesday. 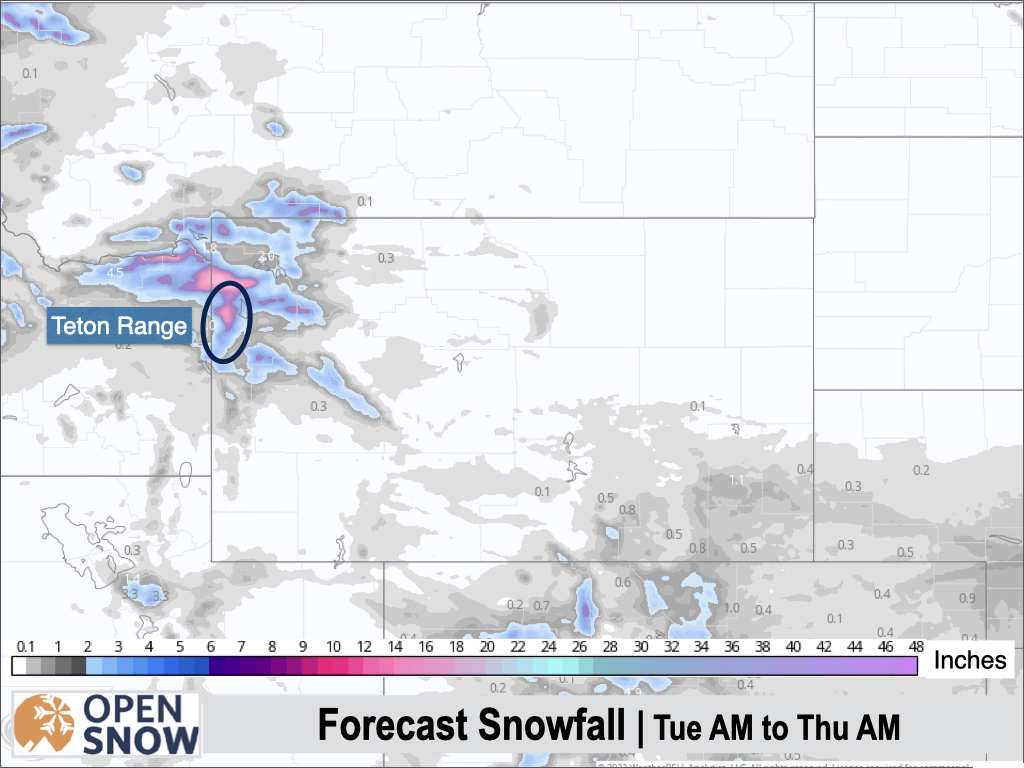 Forecast for Thursday to Friday:

On Thursday, a strong storm over the Pacific Northwest will move inland and deliver the goods to the Tetons. Winds will be out of the southwest with this storm (good for the Tetons as a whole, but a bit more favorable for JHMR than Targhee). 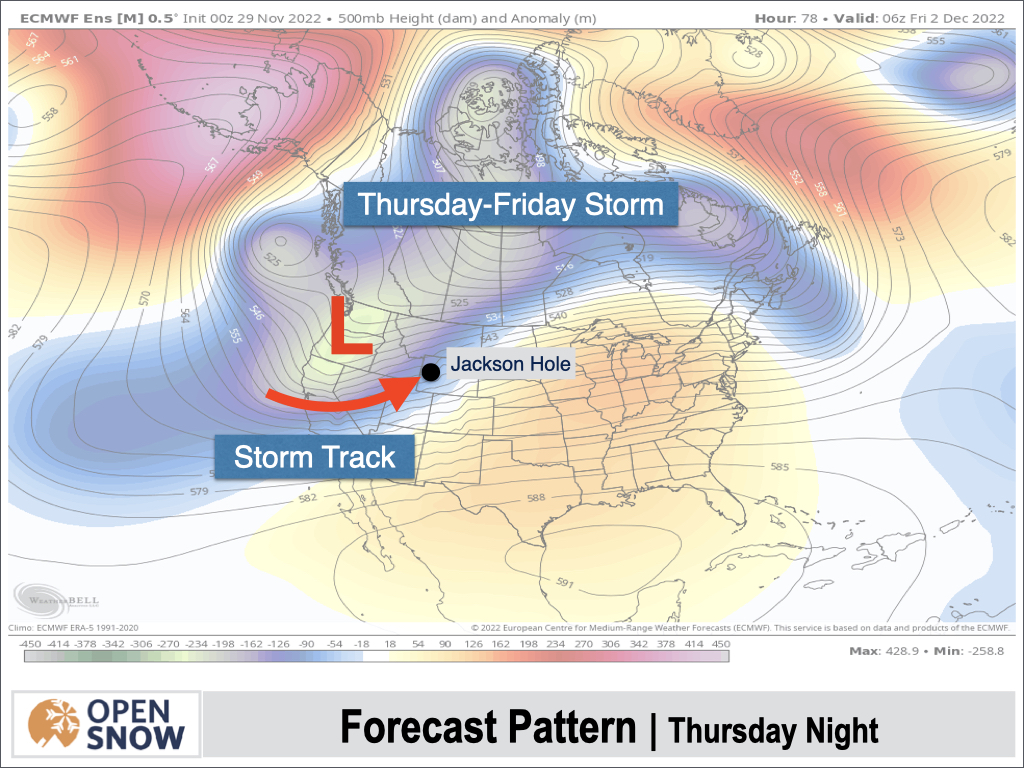 Snow showers will be possible through the morning hours on Thursday, the snowfall rates will start to pick up on Thursday afternoon and even more so on Thursday night as the strongest part of the storm arrives. The heaviest snow accumulations can be expected by daybreak on Friday with lighter snow persisting through about midday Friday.

Snow Totals: Based on favorable trends, I'm upping my forecast a bit to 7-14 inches for the Tetons from Thursday morning through Friday afternoon. The Jackson Hole Valley and Snow King should pick up 3-7 inches. 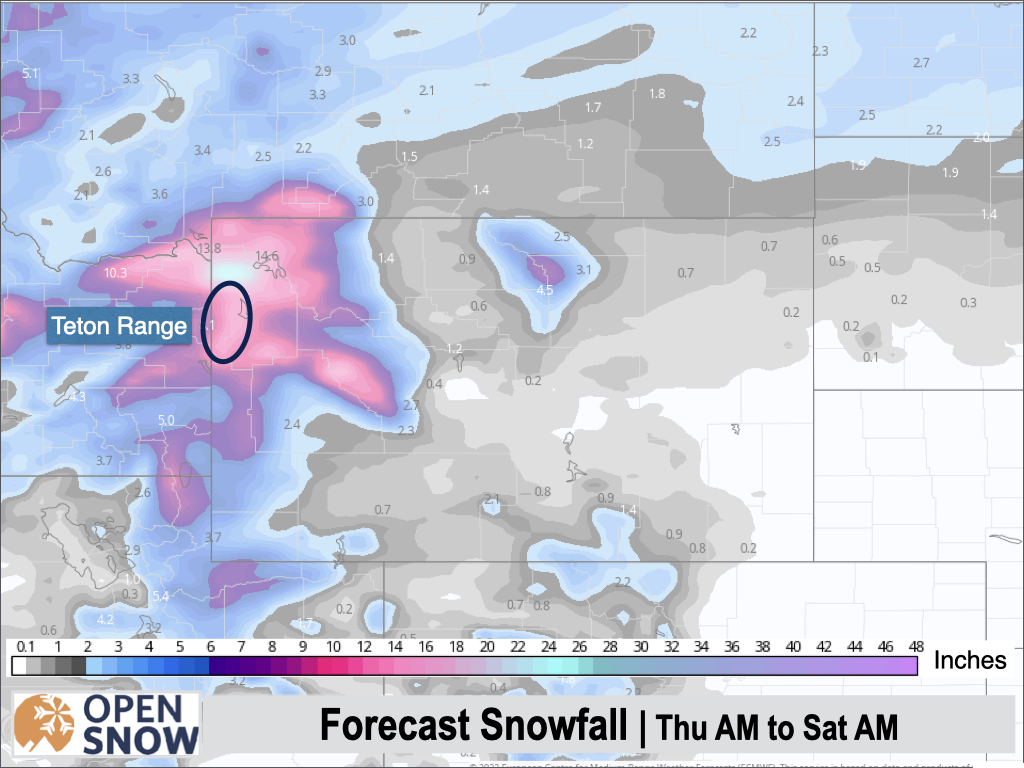 Temperatures will be milder in this storm compared to recent days, and as a result the snow quality will be a bit denser. I suspect snow-liquid ratios will end up around 11:1. However, a strong cold front will be arriving toward the end of this storm on Friday morning, so the last few inches of snow should be lower density.

For skiing conditions, Thursday will be good as we'll already be on day 5 in a row of seeing new snow, but Friday will offer the deepest conditions after Thursday night's heavy snow.

Winter conditions with periods of snow and limited visibility can be expected throughout Tuesday and Wednesday. Snowpacked roads and occasional blowing snow can be expected in open areas as well.

Conditions will worsen from Thursday afternoon through Friday morning with heavy snow, strong winds, and low visibility. Road closures will be possible on Thursday night/early Friday morning, especially if avalanche control is necessary.

Two more storms are possible during this timeframe, but confidence is low in the details. The first storm is expected on Saturday night-Sunday but some models are taking it too far south for us to see anything more than light snow. For now, it looks like we're right on the edge, so stay tuned.

On Monday-Tuesday, a second storm is projected to arrive from the northwest. We may be just on the southern fringe of the storm track for this storm, so confidence is also low. But new snow is a decent possibility at the very least.

Outlook for December 7th and Beyond:

We will likely see a break around the middle of next week (December 7th-8th) as high pressure briefly builds in from the south. The next stormy period could potentially arrive in the December 9th-11th timeframe, but I have little confidence in how this may play out this far in advance.