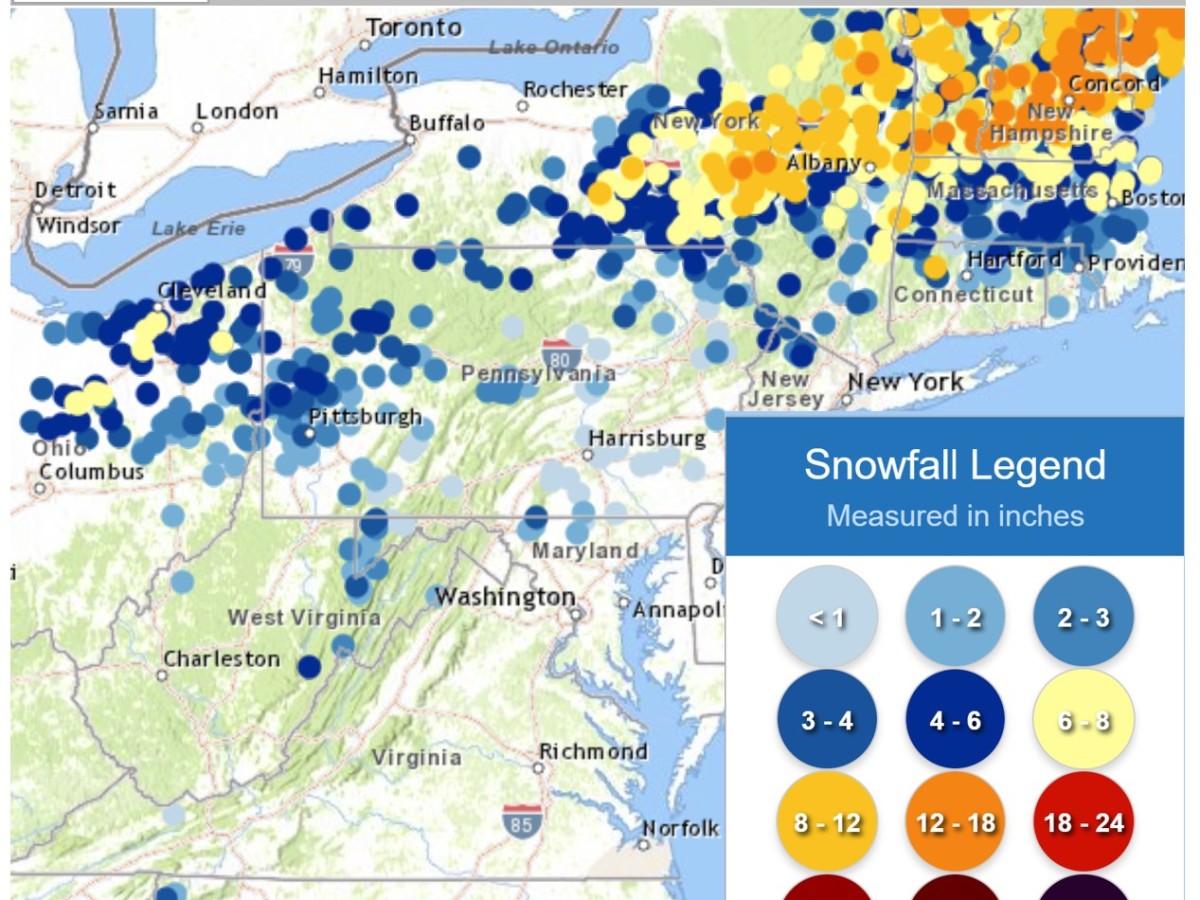 Snow has finally cleared the region and snow totals have settled. The northern Mid-Atlantic saw the most snow, with some sharp gradients based on where a heavier band of snow developed. Here is a look at snow totals throughout the region and look at Windham Monday afternoon. 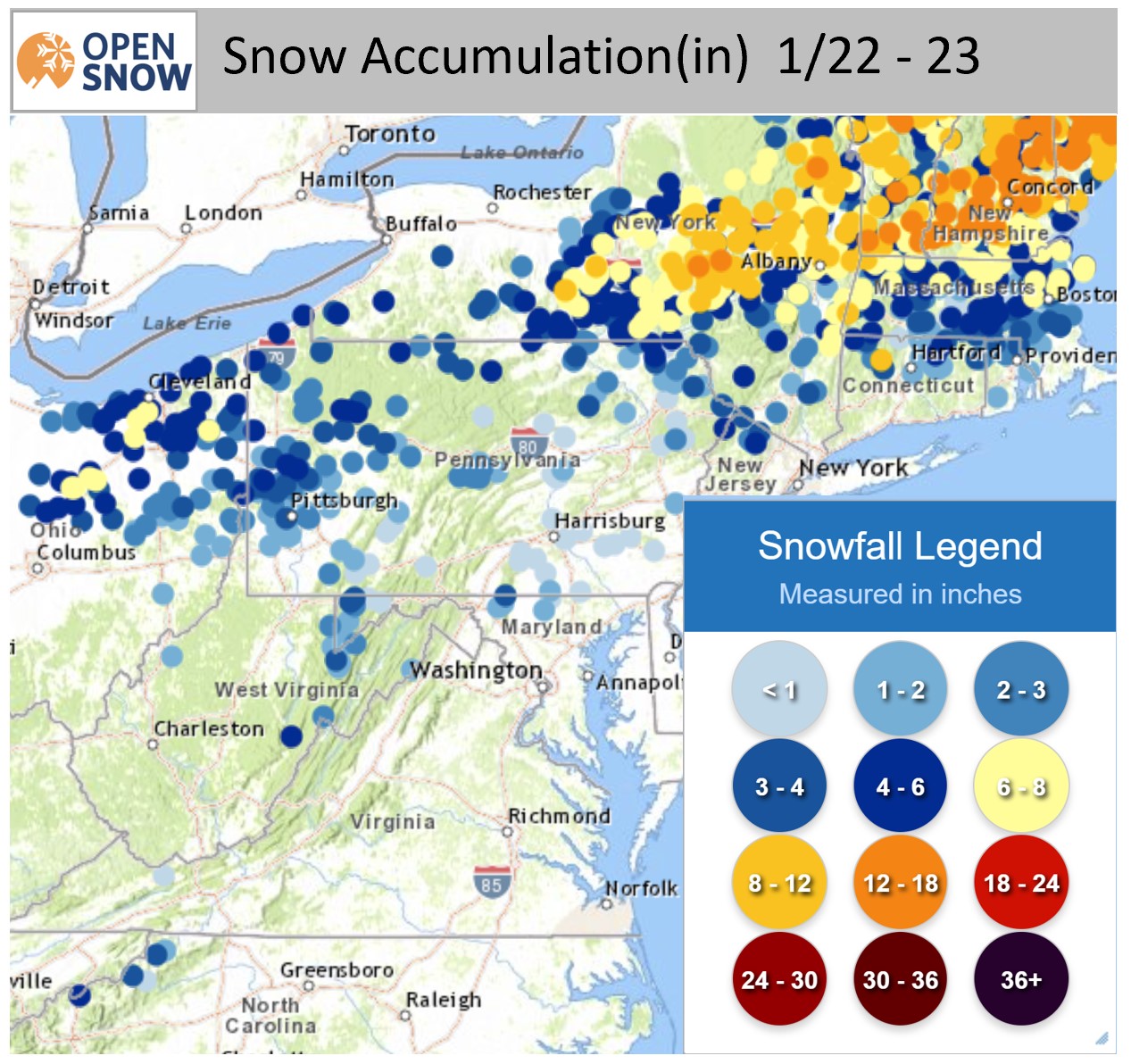 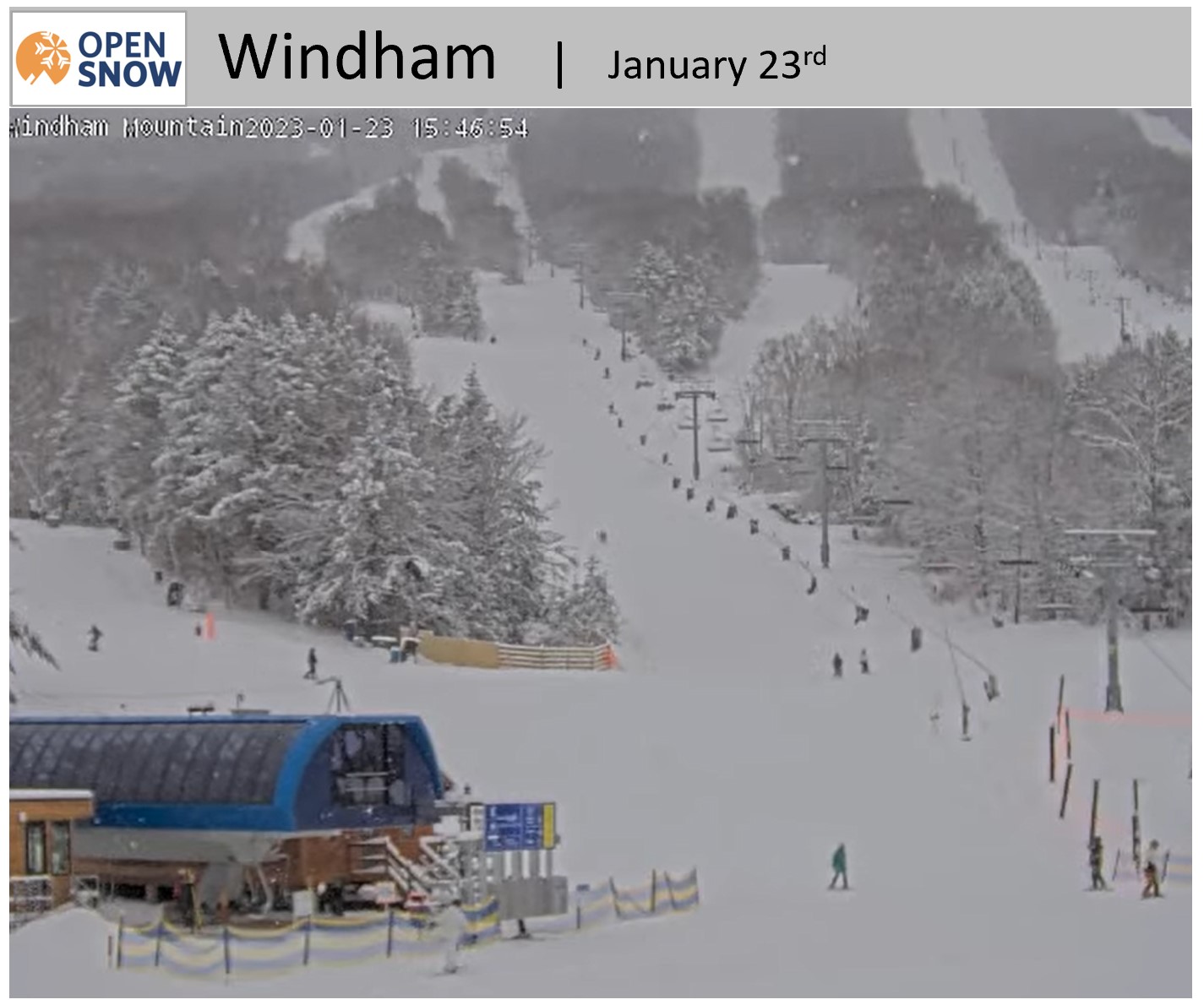 A few lake effect snow showers will develop in the northern Mid-Atlantic on Tuesday, and add a trace - 2 inches of snow. Snow showers will dissipate Tuesday evening as our next storm system quickly moves into the region on Wednesday. This storm system will track through the region, which means an initial area of moderate snow will change to rain, then backside snow. Slope conditions Wednesday morning should be awesome before the snow changes to rain!

Here are the key points for this storm

Here is a look at the NAM 12 km model’s depiction of precipitation type and intensity from 7 am Wednesday, January 25th through 7 am Friday, January 27th. 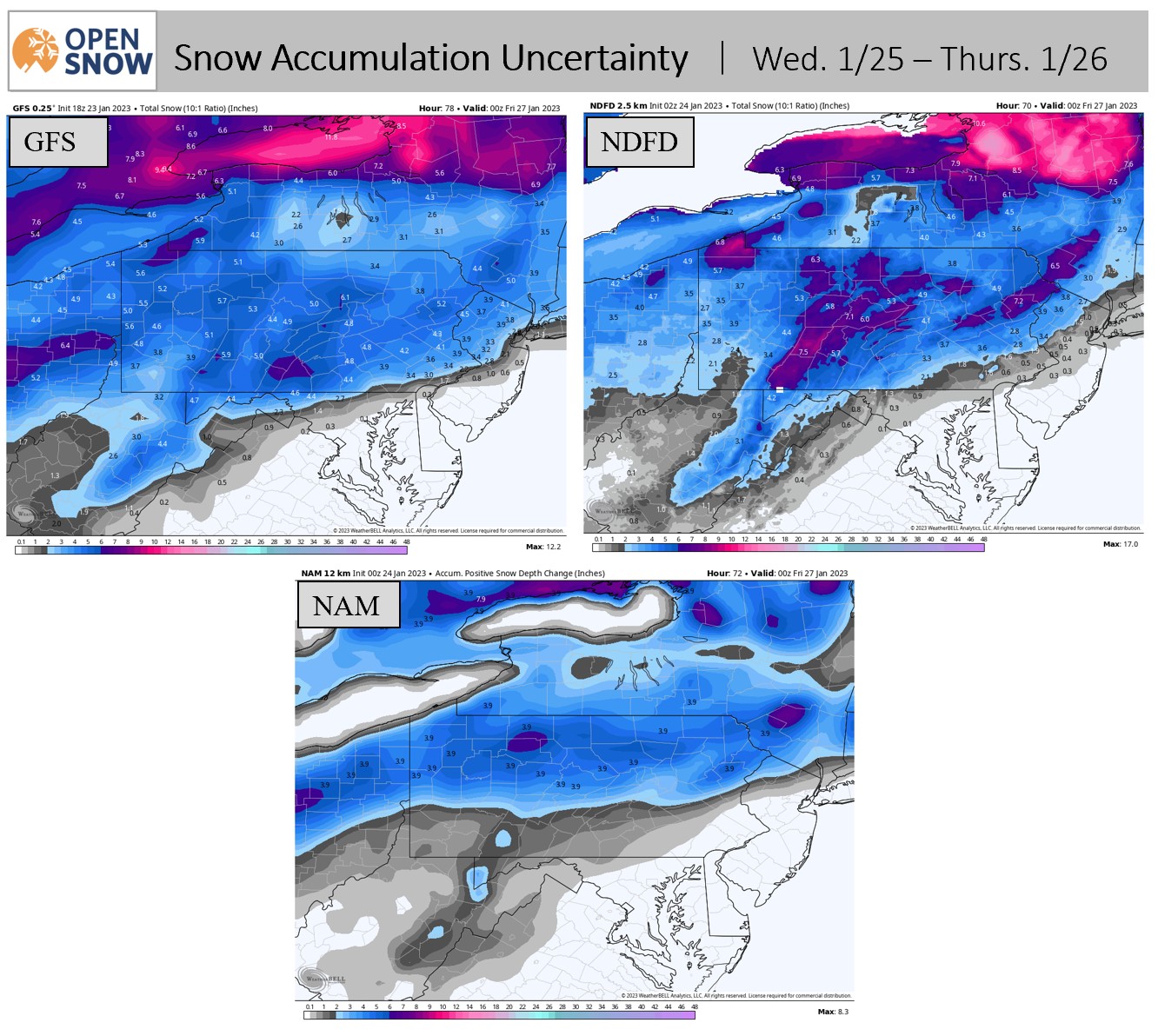 The safest bet for snow looks to be northern PA around the NY border. The good news is that the backside lake effect and upslope snow showers will develop in the northern and western Mid-Atlantic Thursday early morning and continue on Friday and part of Saturday. This looks like at least 3-6 inches from NY to NC. Some areas could see more. The OpenSnow Powder Finder does a good job of showing snow accumulations from both parts of this storm, Wednesday through Saturday. 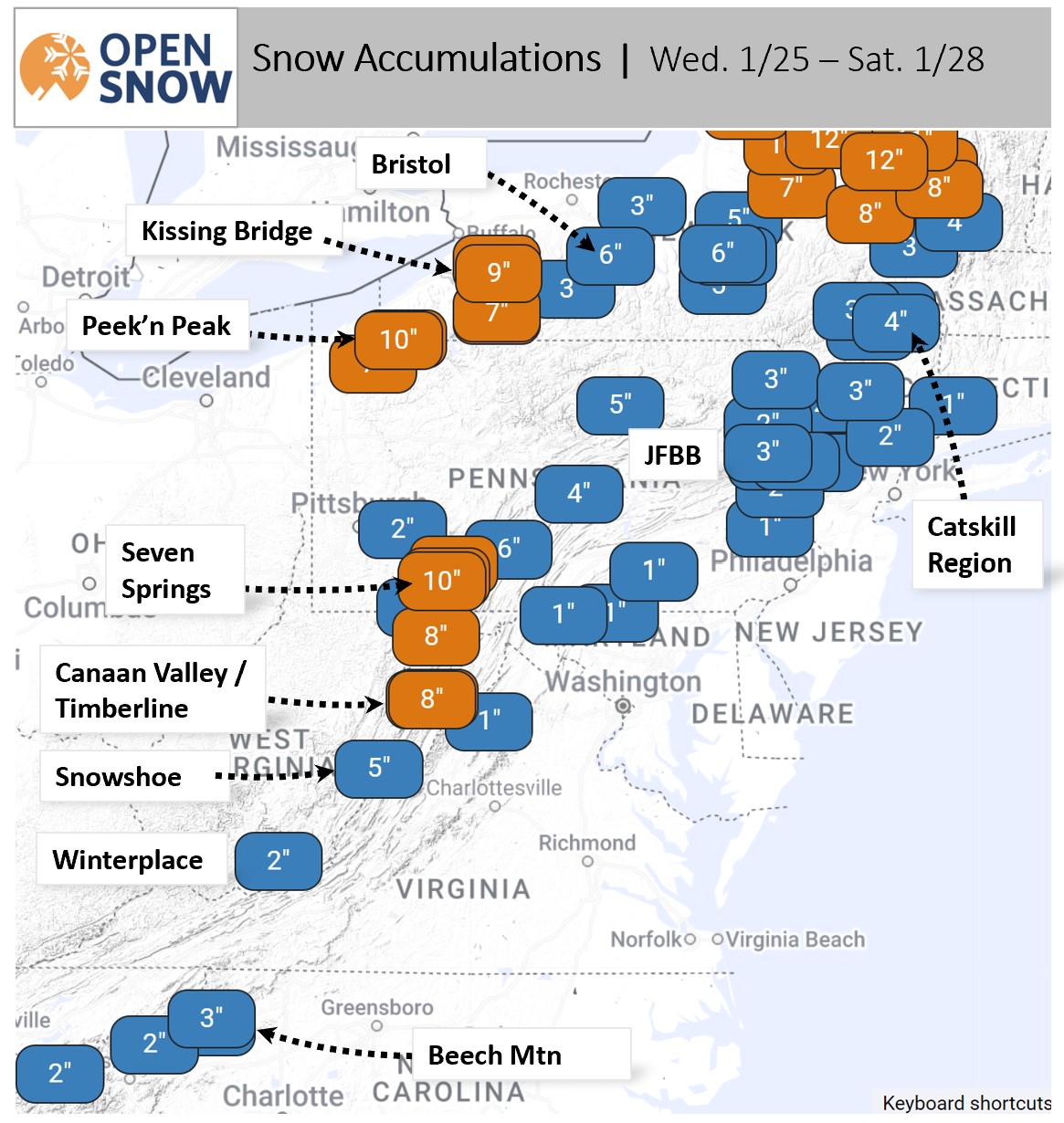 A weak storm tracking in from Canada will add some snow showers throughout Saturday, January 28th to the northern half of the region and for part of Sunday, January 29th. Not a major storm by any means, but it should make slopes fresh this weekend. The next major storm will track into the region later Sunday into Monday, January 30th. There is a lot of model uncertainty for this storm's track, but the odds are growing of another snow, rain, snow mixed storm for the region.

That is all for this forecast and thanks for reading. I will have the next discussion Wednesday morning.

Want to learn more about Nor’easters and coastal storms? Check out this new article here that goes into how they form and what this means for the forecast/slope conditions.