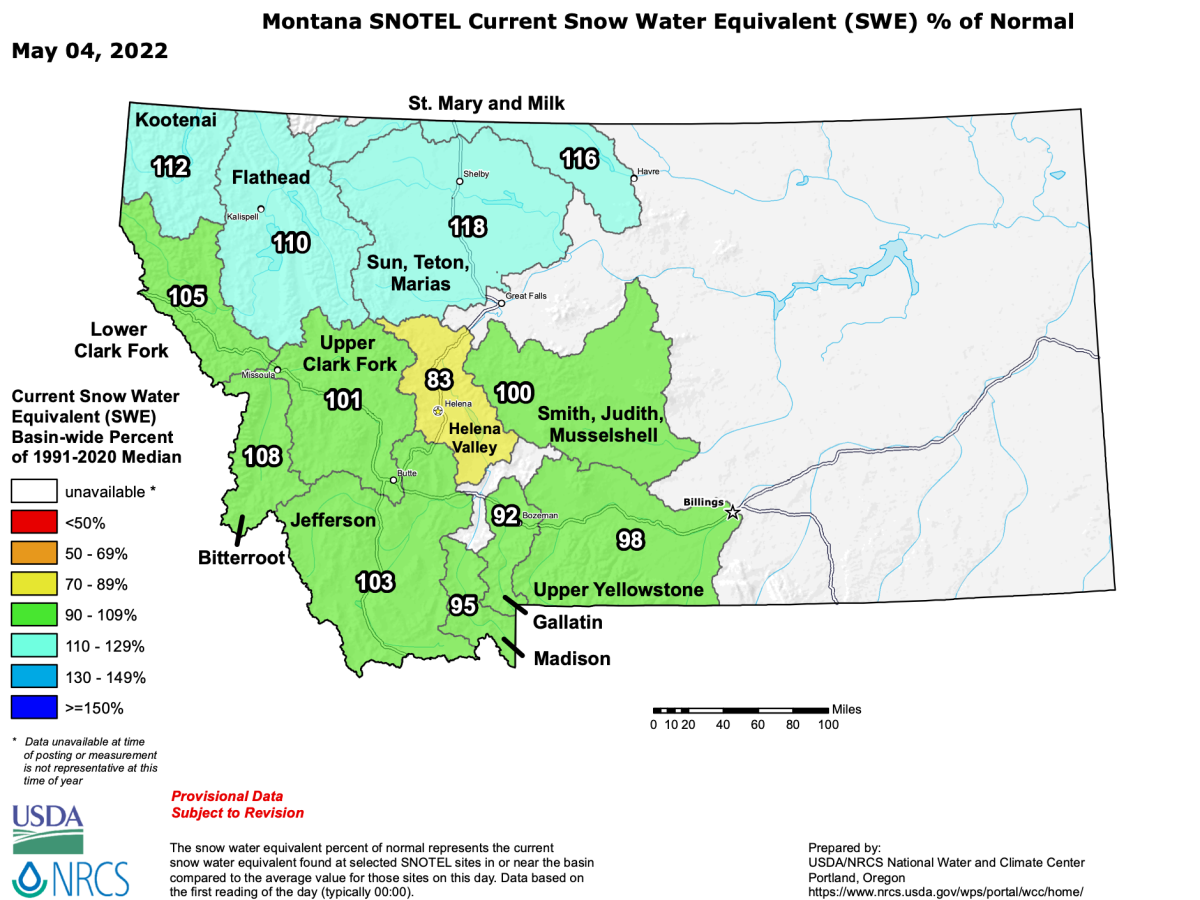 The 21/22 La Nina Winter pretty much delivered as advertised with above average snowfall west of the Continental Divide, and generally below average snowfall for resorts east of the Divide. Highlights included a snowy December for the westside putting many operations in good shape for the Holidays. East of the Divide saw one of the snowiest April’s in memory, but it might have come a tad too late.

By the first week in December, all resorts/areas across the state were already below average in snowpack, with most having delayed openings, most notably at Whitefish and Bridger Bowl. A snowy pattern then kicked in west of the Divide by mid-December with base building high-density snowfall followed by a series of arctic storm systems to close out the month. Whitefish and Snowbowl recovered quickly with better than average snowpack allowing ample coverage with frigid temps over the busy Holiday week. East of the Divide had remnants of these storm systems with occasional light accumulations in the 2 – 4” range, but resorts/areas were still a bit boney (and arctic cold) through the Holiday period.

Below: A deep powder morning at Whitefish on December 17th. Image/Rhyan McLaury 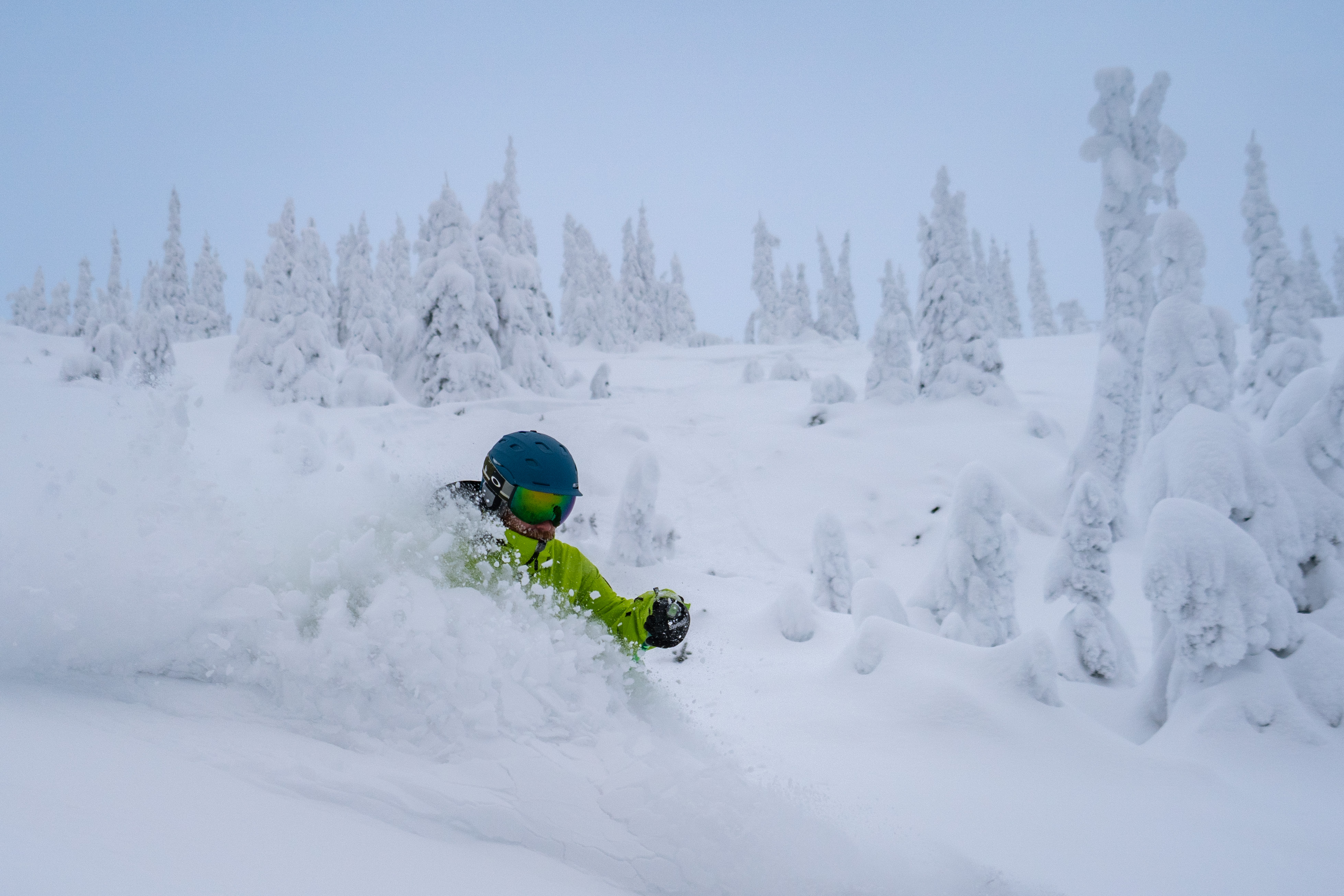 January started strong with a memorable 10” pow day at Big Sky on the 5th.  High-pressure then moved in bringing mostly dry conditions across the entire Treasure State through mid-January. By the last week of the month a series of small systems brought consistent light snowfall amounts to both sides of the Divide. The polar jet stream kept the storm track active into the first week of February. Ski resorts/areas on the westside of the Divide closed out January with above average snowpack. East of the Divide, still playing catch-up, with around 70% of average snowpack. 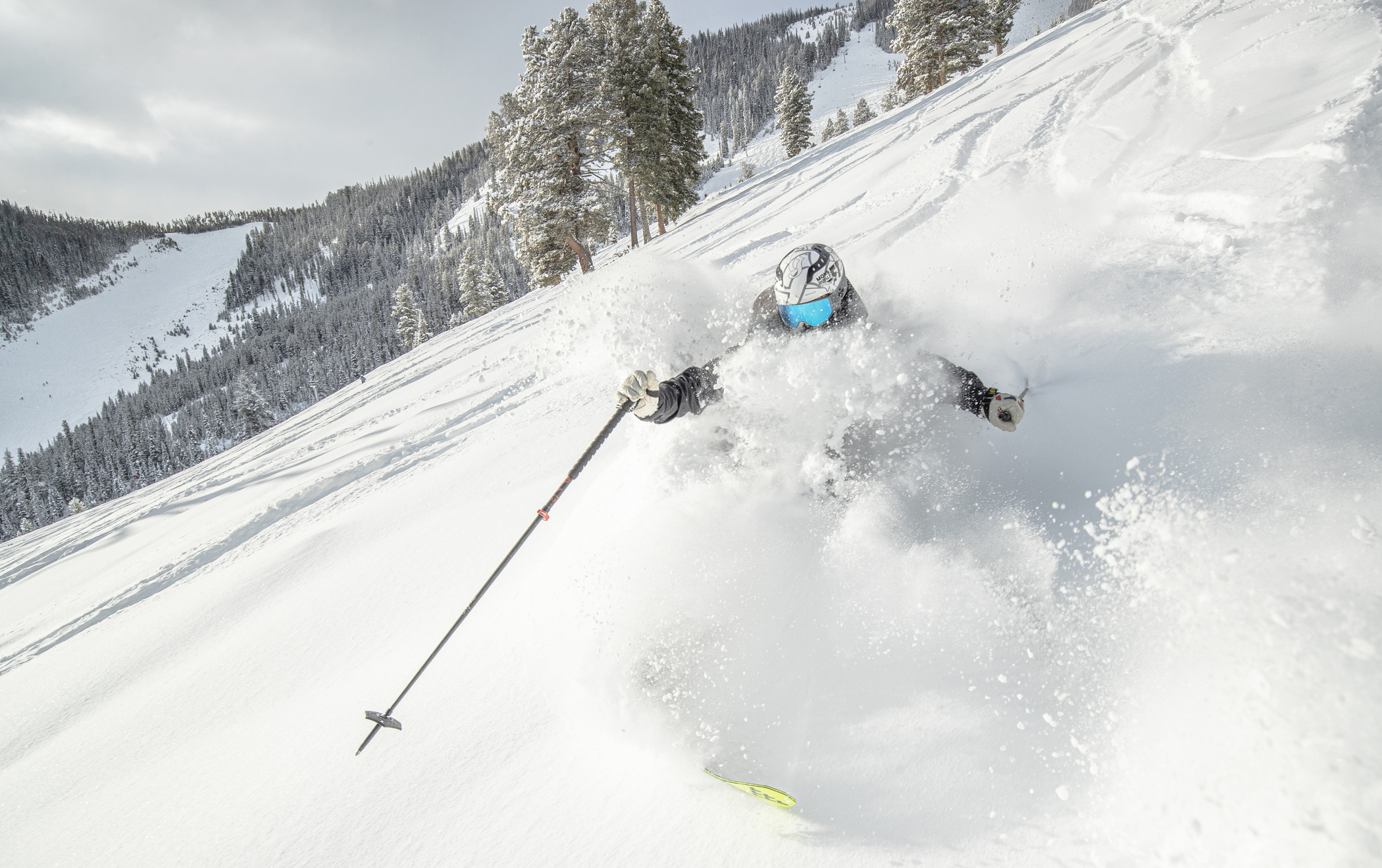 February overall was a disappointingly dry month across the Northern Rockies. Normally the premier month of the season, a blocking high-pressure ridge set up across the west coast diverting storms up into the Canadian Rockies. There were a few high points, with around 10” at Whitefish, Big Sky and Showdown during the first three days of the month, with 20” falling at Red Lodge on the 16th and 17th. Besides a few shortwave storms dropping a few inches here and there, snowpack at all resorts/areas across the state was below average by the end of February.

Below: Although a predominantly dry month overall, Whitefish saw some great powder on the 1st and 2nd of February. Image/Pat McGrath 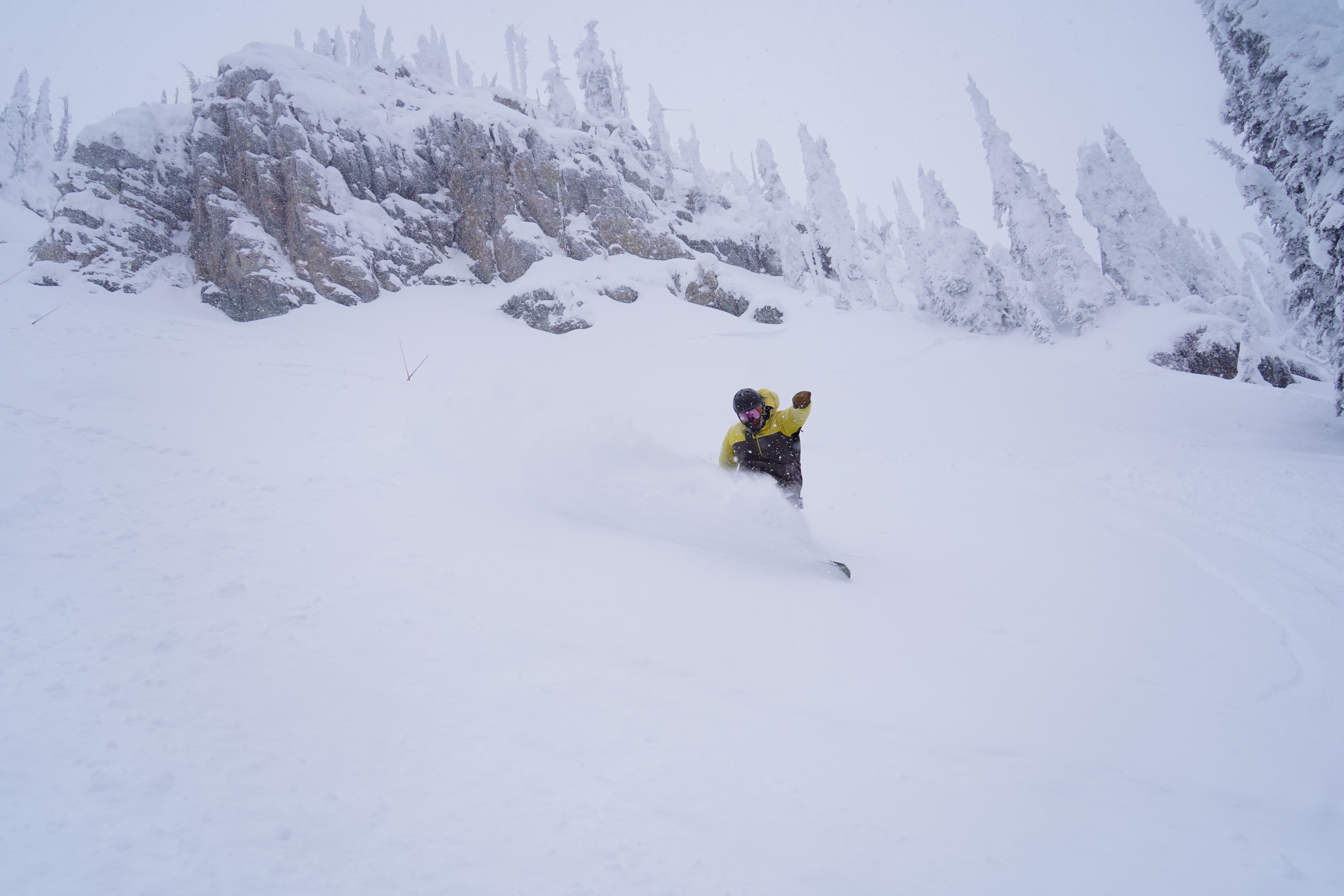 March started off incredibly strong west of the Divide as a SW flow brought an Atmospheric River (AR) of sub-tropical moisture bringing heavy snowfall above 5000’. Whitefish reported 23” between the 1st and the 4th of March with even higher amounts at Turner Mountain and Lookout Pass. East of the Divide, Big Sky and Showdown were best positioned with consistent 2 – 4” snowfall every few days until the 21st of the month when the tap went dry as high-pressure once again dried things out. The Westside had a few more bouts with AR’s during the middle part of March before falling under a dry spell of high-pressure to finish out the month. Snowpack percentages were varied by the end of March with NW and West Central Montana’s resorts/areas hanging slightly above average, with generally 70 – 75% of seasonal average east of the Divide.

Below: A rare bluebird pow day at Whitefish in March. Image/Rhyan McLaury 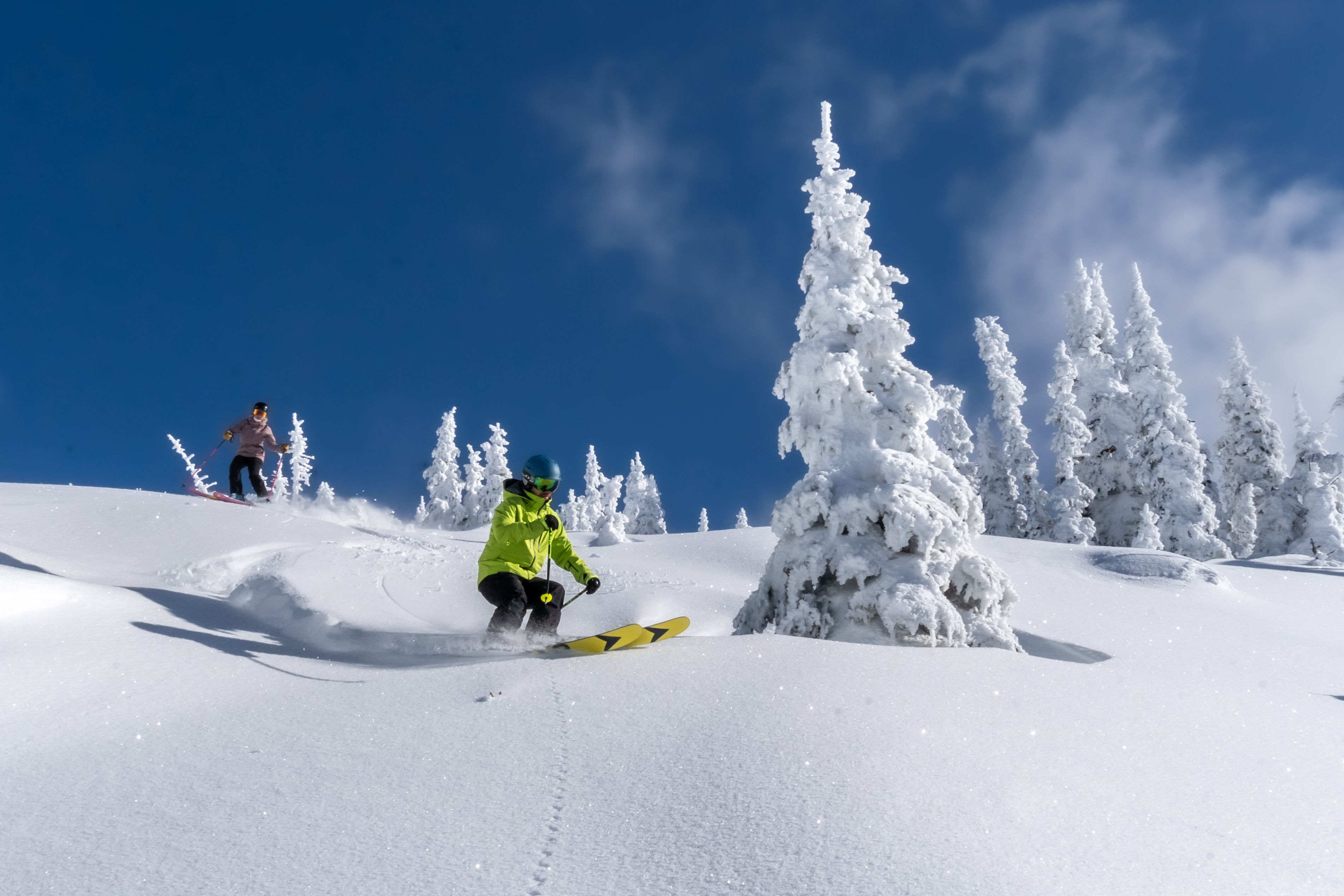 During the first half of April, the polar jet had a favorable dip across the Northern Rockies transporting in a series of cold storms across Montana. This pattern worked especially well to the east of the Continental Divide at Big Sky and Red Lodge. To the west of the Divide, Whitefish had one of the most enjoyable early Aprils in memory, with consistent cold snowfall in the 4 – 6” variety ever few days, culminating with a foot of feathery pow on closing weekend (9th & 10th). But the real action was happening at Big Sky where they recorded 61” between April 1st and 24th. Red Lodge also hopped on the powder bandwagon with a remarkable storm that dropped 31” in 2 days. Big Sky and Red Lodge both were the last resorts to close the Montana lift-served season on the 24th of April.

Probably the most ironic event of the entire 21/22 season was that Montana’s most iconic resort Big Sky, had its deepest pow day on the very last day of the season with around 2 feet of cold smoke pow. For those who were there on that special day, powdery dreams of ‘Apriluary’ will live in their minds throughout the hot summer months ahead.

Below: Epic last day of the season at Big Sky. Around 2 feet fell on Saturday and Sunday April 23rd and 24th. Image/Big Sky Resort 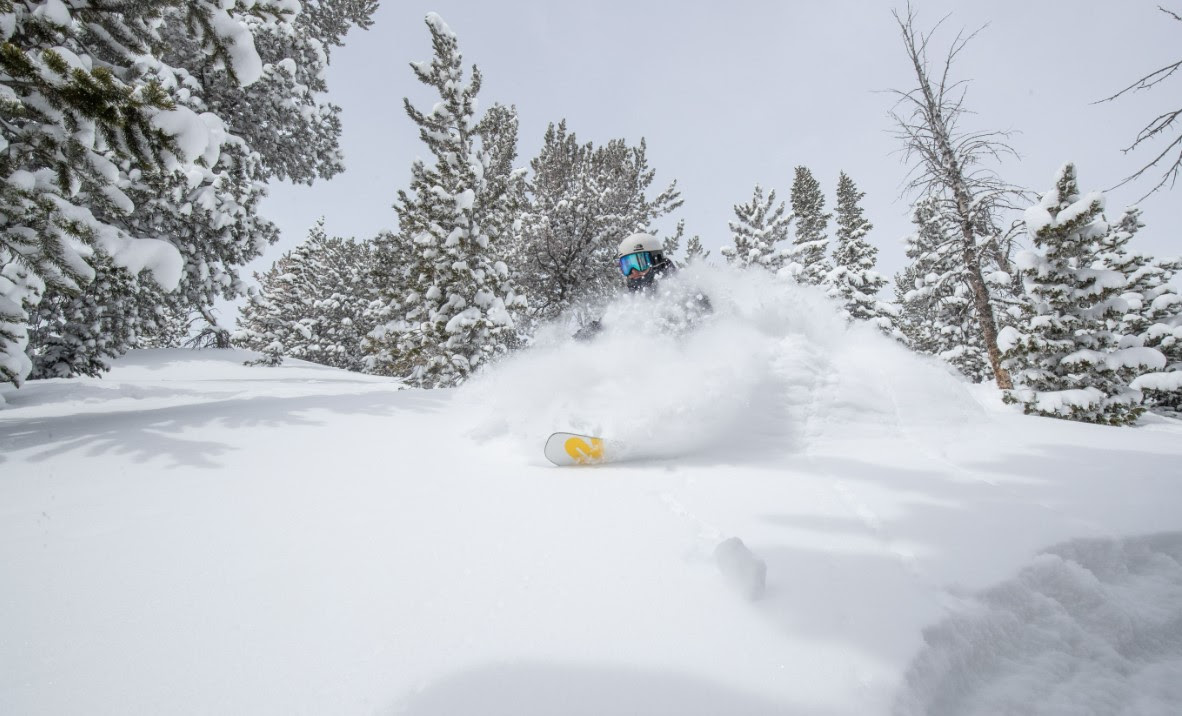 Below: Seasonal Snowpack Graphs for the four most popular ski resorts in Montana; Whitefish, Big Sky, Bridger Bowl and Red Lodge Mountain. Whitefish received the most consistent snowfall throughout the season of the "Big4". Bridger Bowl unfortunately fared the worst, often positioned just north of the storms that were hitting Big Sky, only 45 miles south as the crow flies. Big Sky made a great recovery in late March and April, but coverage was somewhat thin on the steeps of Lone Mountain over the majority of the season. Red Lodge, historically a resort that gets most of its snowpack in March and April, did just that with some epic late season dumps. 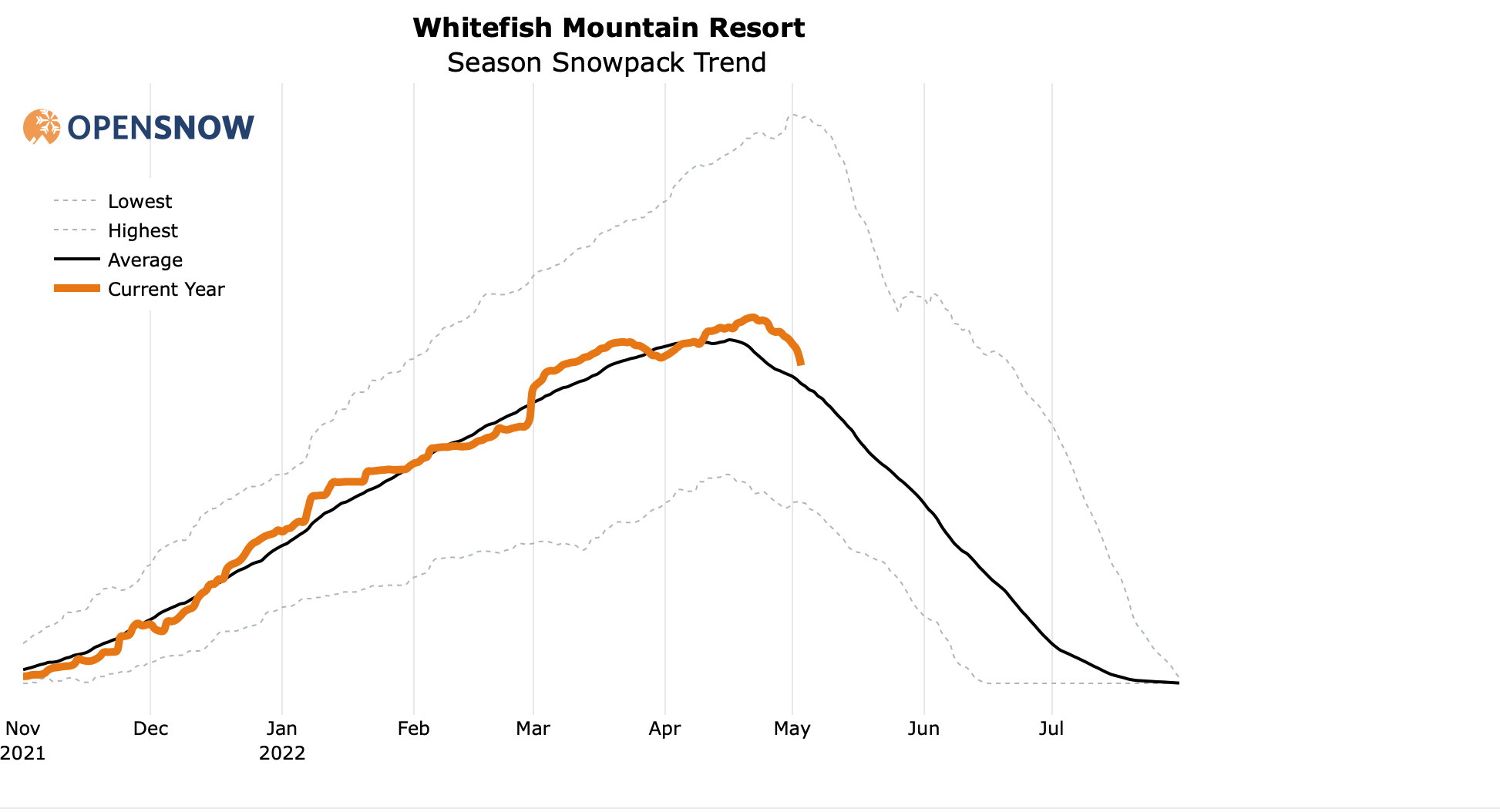 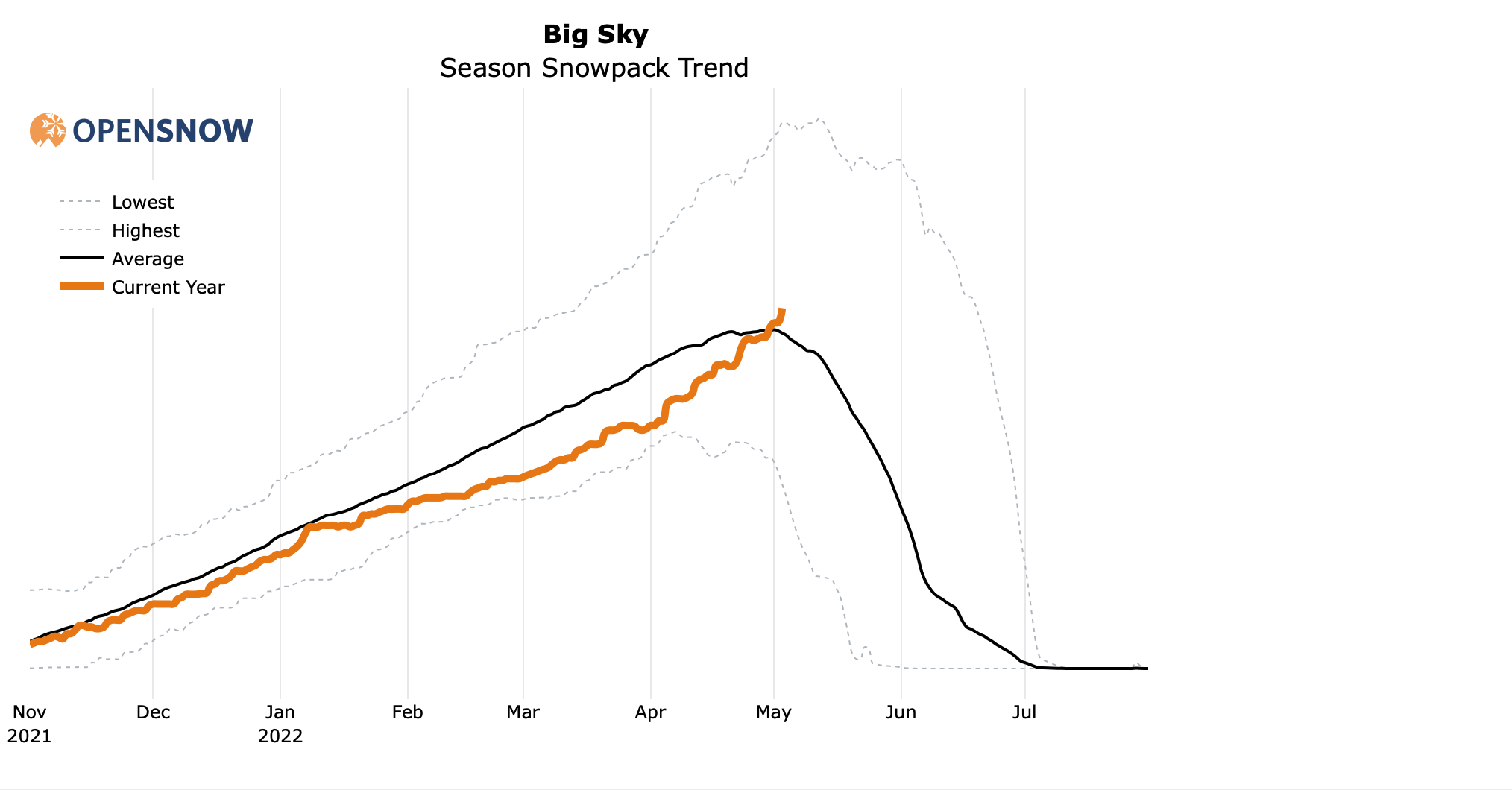 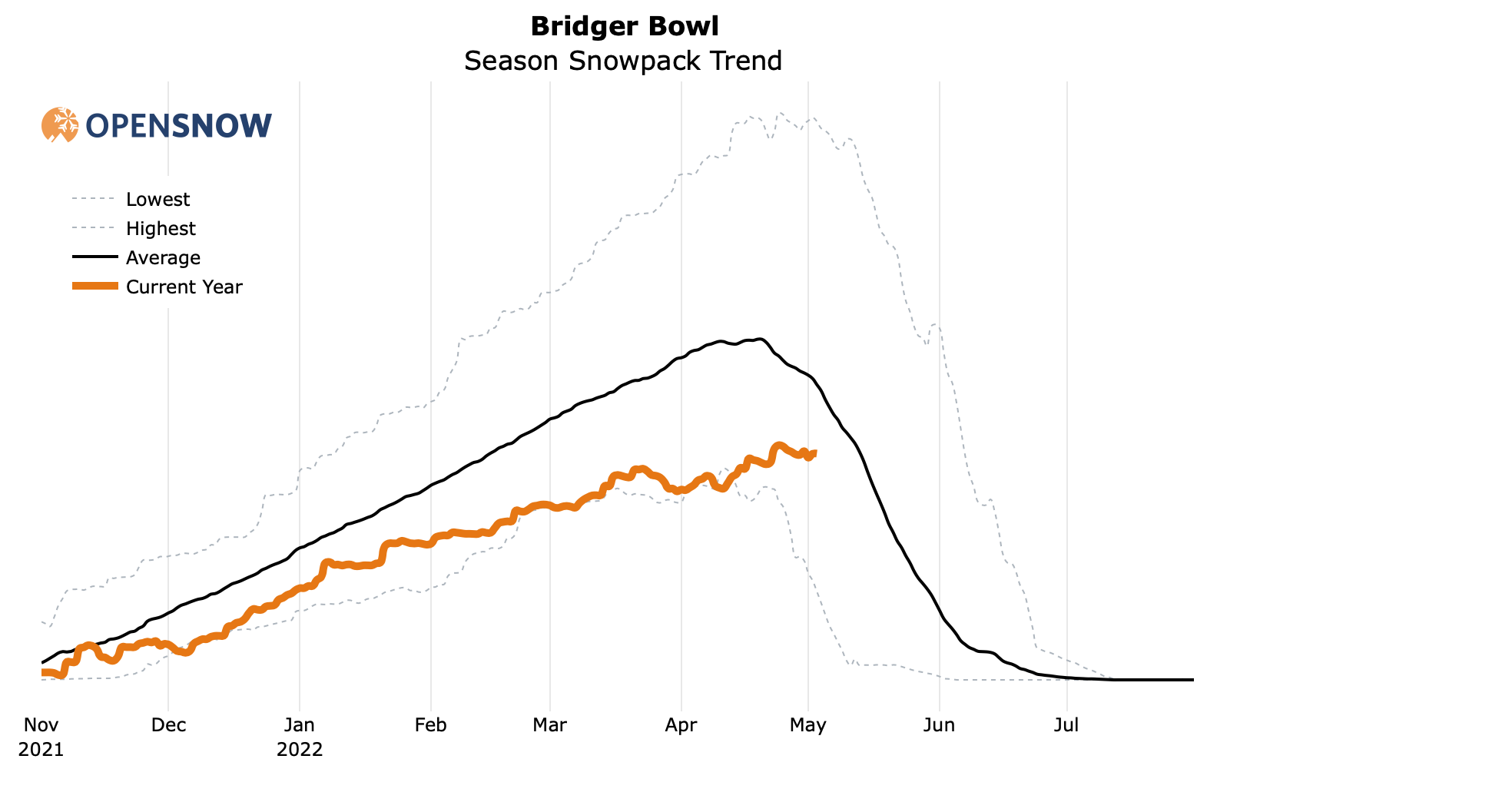 Below: As usual, there were big variations in the mountain snowpack across the Northern Rockies. Highest percentages are across the Northern tier (in light blue), where Whitefish Mountain, Turner Mountain, and Teton Pass Ski Area are located. SW Montana (in green) where Big Sky, Bridger Bowl, Maverick Mountain and Lost Trail Pass are located grew their snowpack almost 20% during the month of April as they were at around 80% on March 31st. This is great news for a drought plagued state. 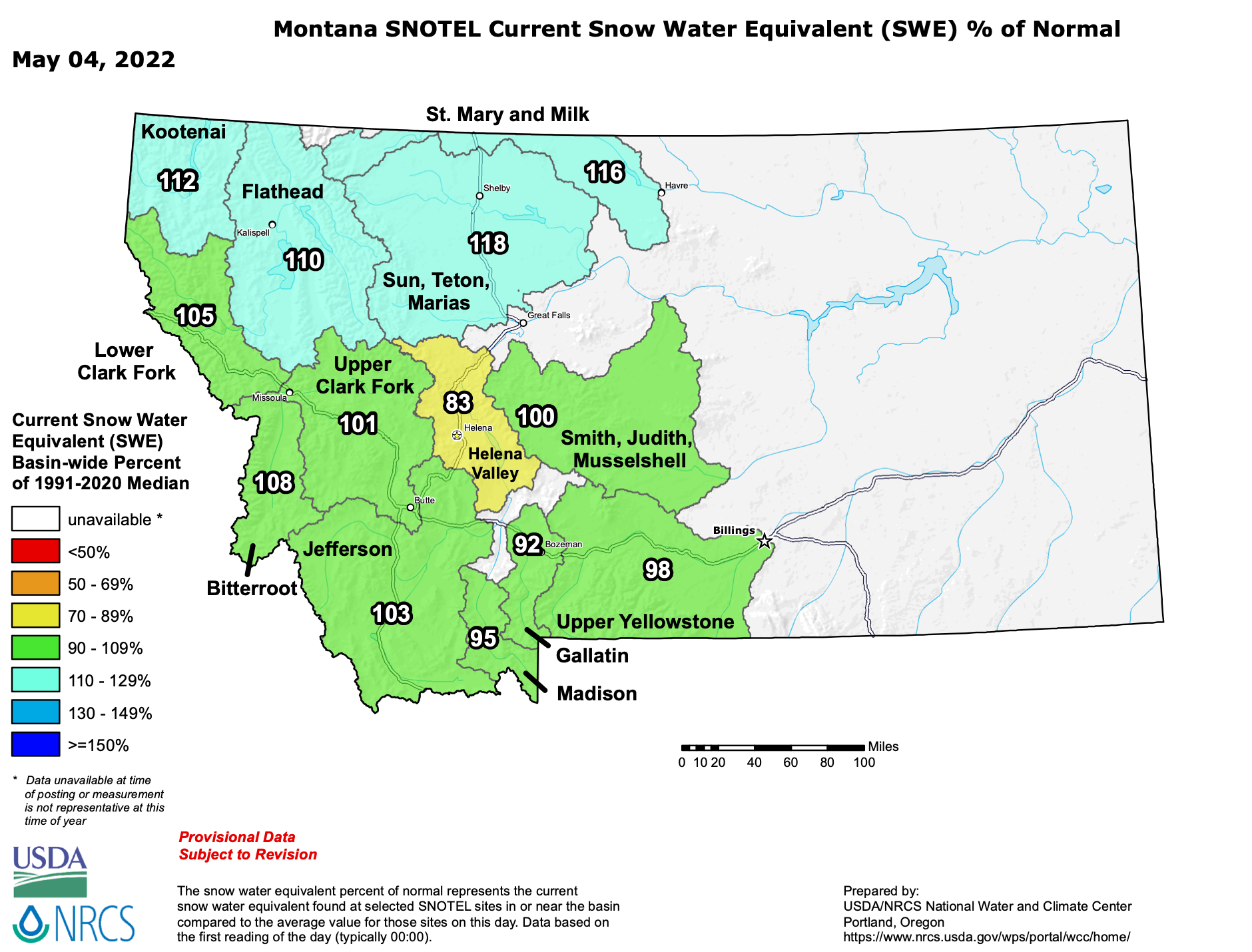 Finally, heartfelt thanks to our Montana powder brethren, the skiers, boarders, parkies, ski-mo’ers, mono-skiers, and snow bladers that keep the stoke of the powder culture alive all season long. Thanks so much for reading, and hopefully I helped in a little way to bring the pow to you this past season. We’ll talk again next November, until then enjoy an amazing summer in the Montana Rockies!

FYI  -  Beartooth Basin (summer ski area) has decided NOT to open this spring/summer. They had previously reported that they planned to open on May 27th but snowpack was too thin across the windblown Beartooth Plateau to safely operate.

Also, be sure to read the Western US Daily Summit from May through September, which is a large-scale weather discussion I write 1-3 times per week, discussing weather patterns throughout the Western U.S.