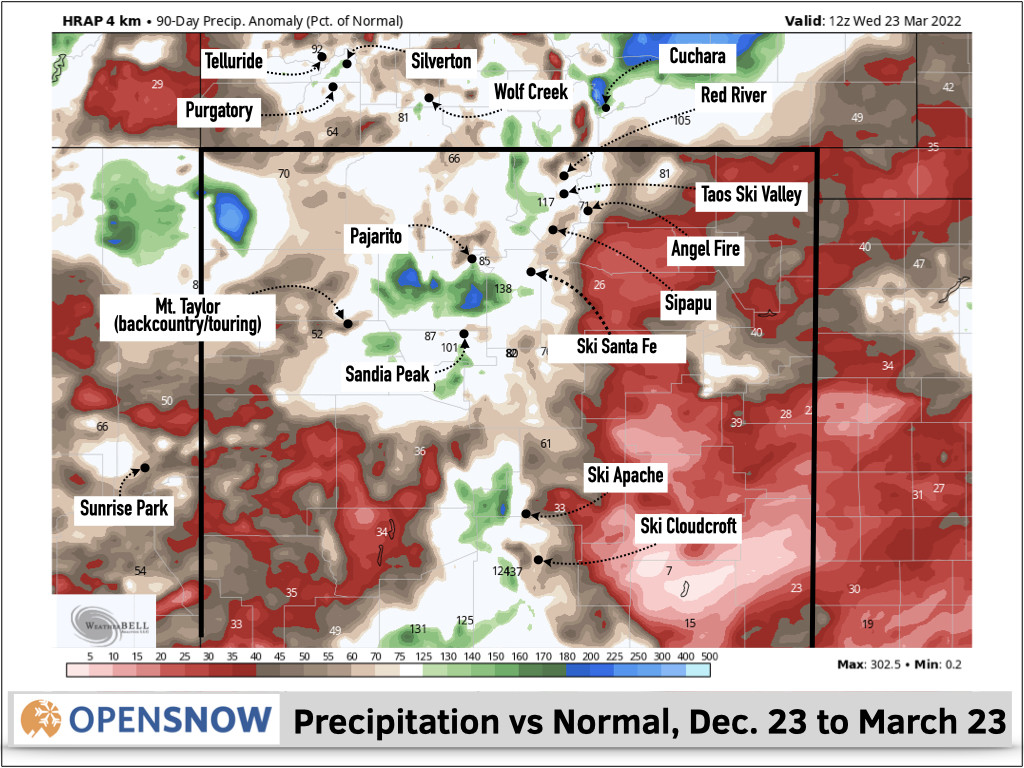 If we cherry-pick late December to late March, the 2021-2022 season was pretty good from a snowpack and skiing/riding standpoint. We break down the season snowfall in this post. We also look at how the La Niña forecast verified this season, and what the La Niña forecast says going forward.

Before I do a final season wrap-up post later this week, I am happy to respond to the reader-submitted questions that came in. Several folks asked about how the season performed compared to past seasons, both La Niña or otherwise.

From a pure numbers standpoint, the 2021-2022 snowpack season which essentially goes from November through April will finish way below normal statewide. This is in large part due to a abnormally dry November and first three weeks of December and now a horribly dry April that is ongoing.

From a skiing and riding standpoint, the 2021-2022 season in the northern mountains will go down as pretty darn ok, or at least not bad. And if we cherry pick the middle three months of the season it was at or above average in many places which is awesome, though not unusual, for a La Niña.

For the southern mountains, the 2021-2022 season will go down as among some of the worst in history. And this is quite normal for La Niña which gets more extreme the further south you go.

What saved this double-dip La Niña season for the northern mountains was 1) significant holiday storms in late December and early January that allowed most mountains to open and also open a decent amount of terrain, 2) major storms in February and March that made for great powder days and built our snowpack to near normal levels, and 3) moderate back to back days of snow in late March and very beginning of April that allowed Sipapu, Santa Fe, and Taos to close with fantastic conditions.

The snowpack trend for Sipapu, which lies in the middle of the Sangres, is a good overall representation for all northern mountains. The graph below illustrates very well the flatline early season and precipitous decline in April, but good enough snowfall around the holidays, February and March to keep us hovering around the historic average. 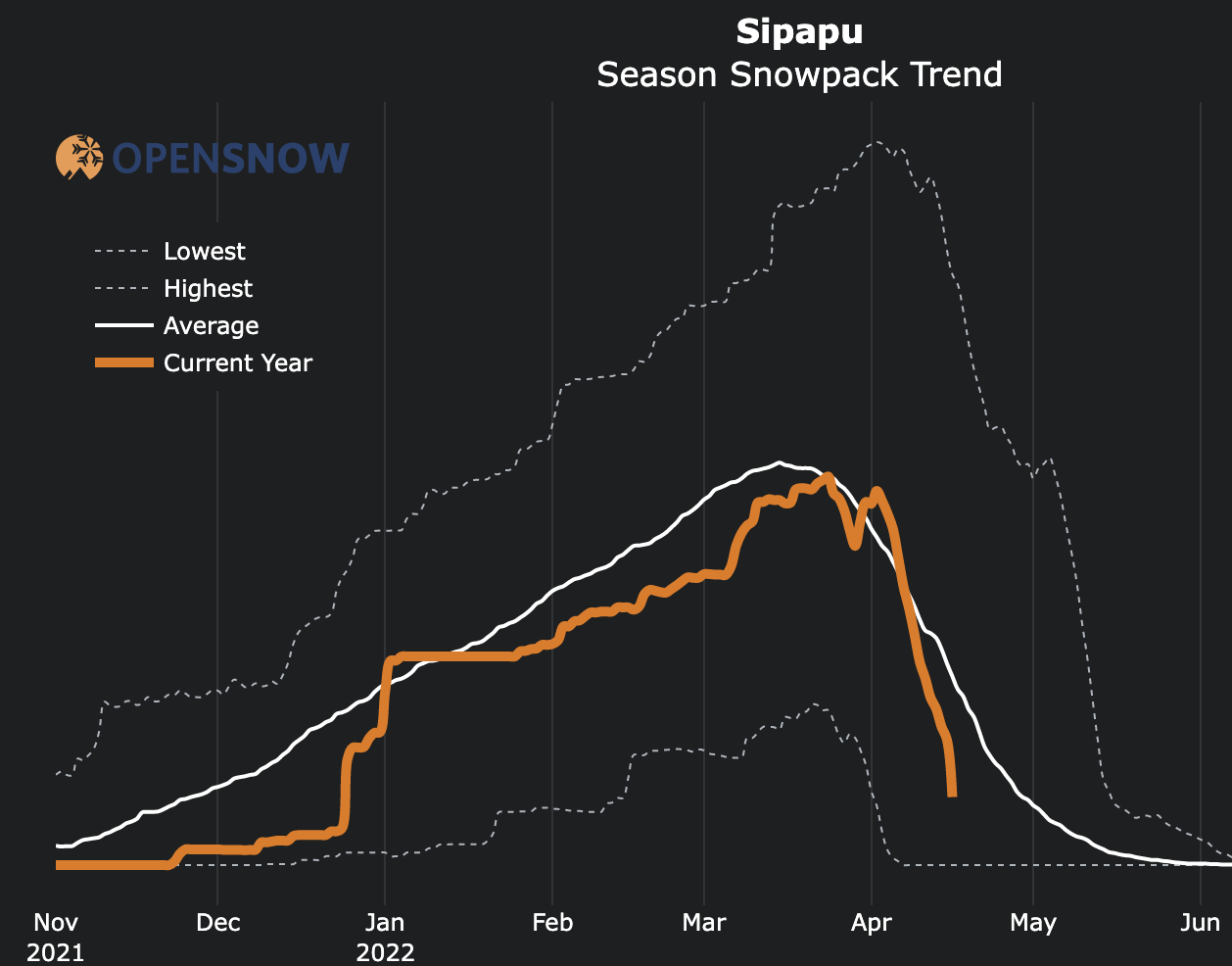 Most of the snow this season fell in the sweet spot of the season which we can be grateful for. If we are going to have extreme dry spells, I suppose it is better to have these at the very beginning and very end of the season as was the case this year.

Another great illustration of the 2021-2022 season is from Taos Ski Valley's awesome weather station data where we can see every storm that delivered snowfall. We will remember this season as lean but mean: not many storms but the ones that came through delivered in a big way. 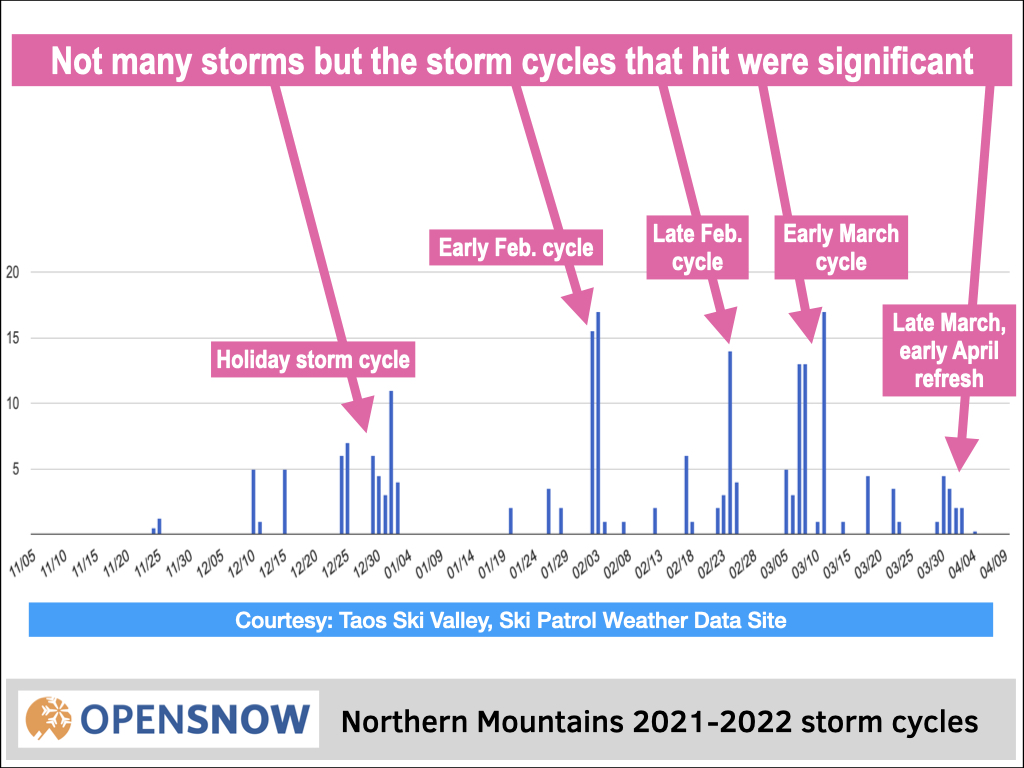 If we cherry pick the three month period from December 23rd to March 23rd we see lots of whites and even greens/blues (at or above-normal) in the northern mountains. 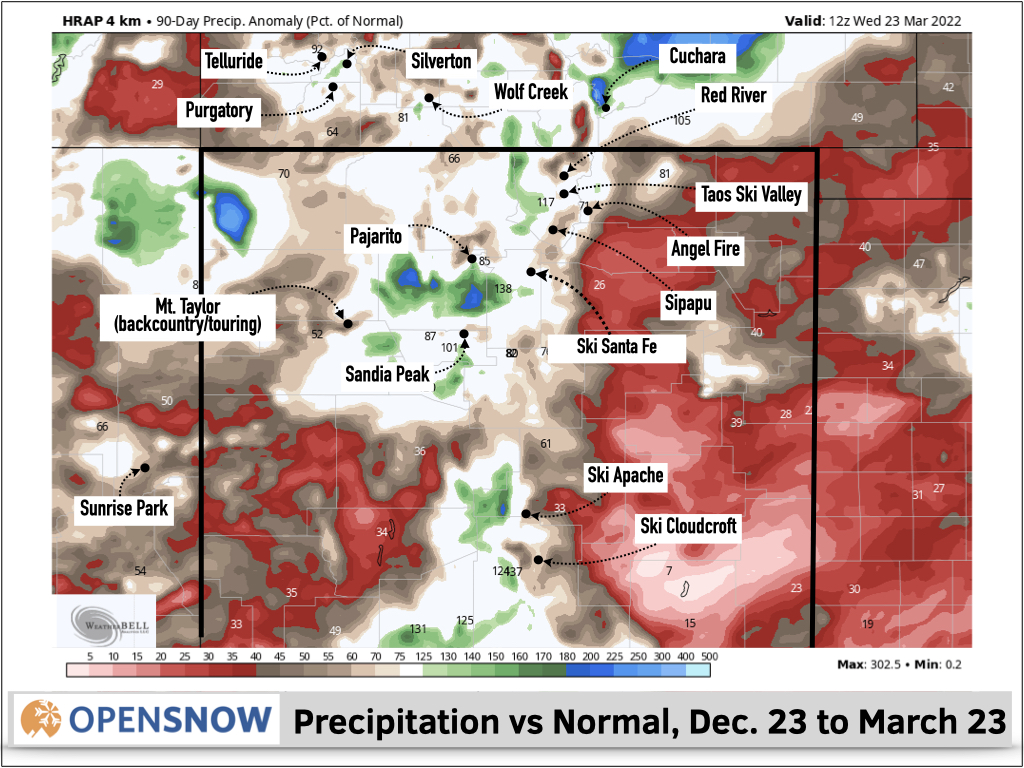 If we don't cherry pick, and look at the full season going from Oct. 17 to April 17 it is a very different picture with mostly browns and reds (below normal) precipitation. The only exceptions being Wolf Creek and some of the western side of the Jemez that did better with southwest flow storms, and Cuchara also came in at or above normal with the strong series of storms this season. 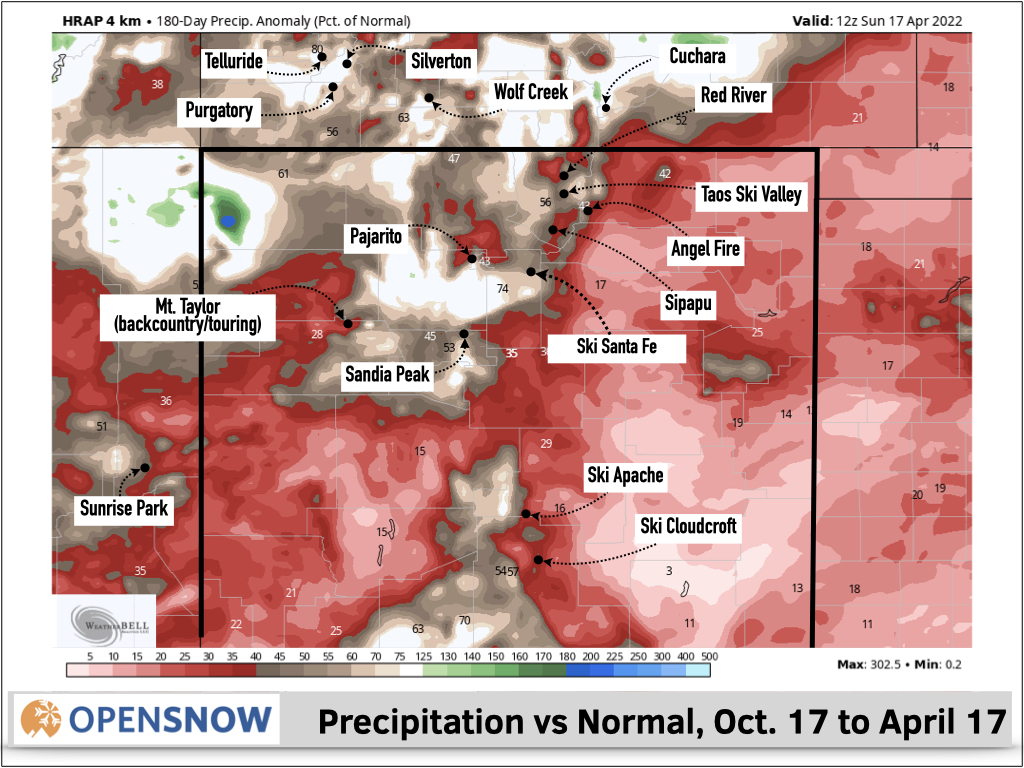 For Ski Apache near Sierra Blanca in the southern mountains, this season was simply dismal. The bolded black line at the very bottom of the graph is this year's snowpack and the few storms that came through were just blips. The bright green line is the historic median. Unfortunately, we expected this because the southern half of the state almost always takes the brunt of the La Niña.

Another illustration from NOAA shows actual precipitation from October through March with pockets of normal (whites) in the northern mountains of New Mexico and even a bullseye of slightly above normal (greens) around Taos Ski Valley. This graph would look different if it included the first two weeks of April which have been bone dry. 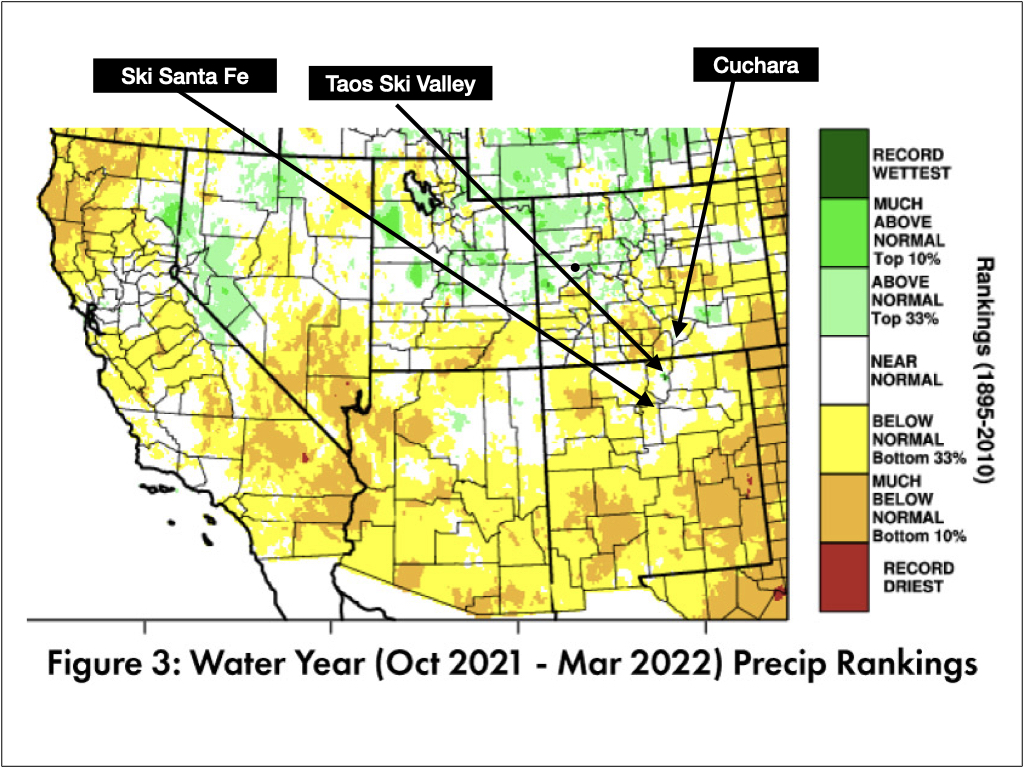 Looking ahead, three consecutive La Niñas are rare but not unprecedented. A triple-dip La Niña has only happened two times since 1950.

The latest from NOAA's climate prediction center regarding La Niña is the likely continuation of La Niña through the summer (59% chance), with a slightly lower chance into the fall (50-55% chance). You can geek out on this and more forecast analysis data here. It is simply too early to hypothesize what the 2022-2023 season will hold. But the odds are at least in our favor in terms of history that there won't be a triple-dip.

Thanks for reading! I will dig into a few more reader-submitted questions in my next post.