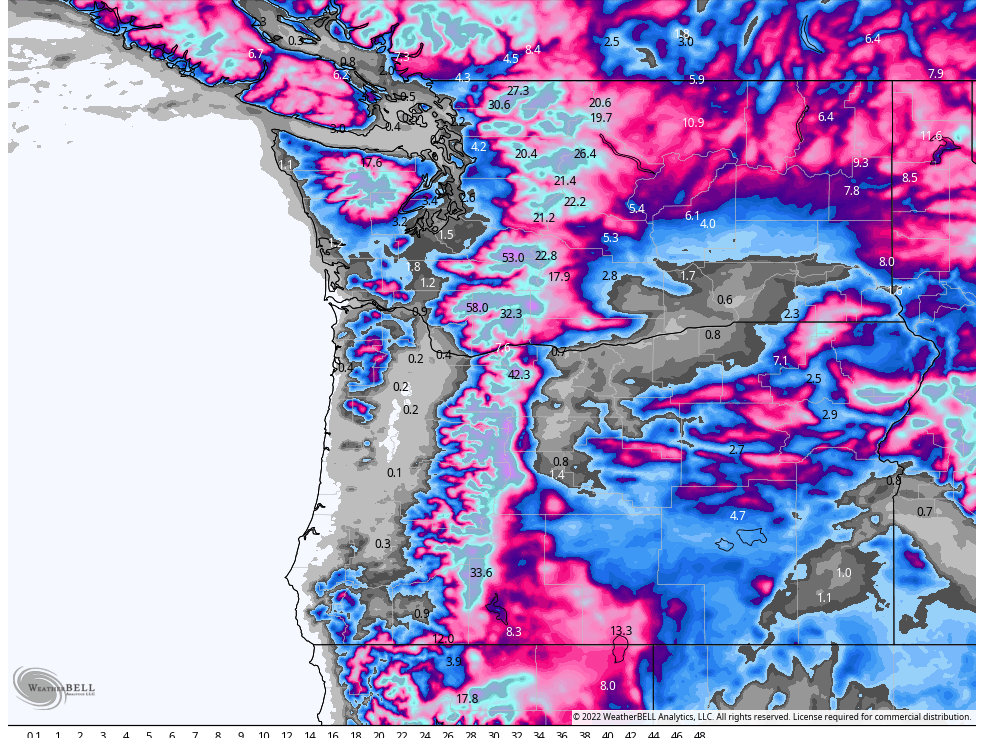 A strong storm remains on track to deliver the goods to the entire Northwest this week. The main adjustments I've made is to lower the snow forecast slightly for Washington & Northern Idaho, and raise it slightly for Oregon based on the latest trends with short-range/high-res models coming into play. Still this is going to be a deep event for all areas with widespread double-digit totals.

Snow is getting underway on Tuesday afternoon and will become heavy from Tuesday evening through Wednesday morning as the main part of the storm moves through. Snow levels are starting out near sea level and will only rise to around 500 feet north of I-90 and 1,000 feet south of I-90 (generally speaking).

Snowfall will become more showery and intermittent on Wednesday afternoon and Wednesday night, favoring areas south of I-90 during this later period. Light snow showers and flurries will then persist into Thursday before tapering off on Thursday night.

For snow totals, I'm going with a general 1-2 feet for ski resorts throughout the Cascades as well as Hurricane Ridge in the Olympic Range. On the eastern side of the Cascades, Mission Ridge will pick up 6-12 inches. I also wouldn't rule out totals in excess of 2 feet at Mt. Baker and at Paradise. 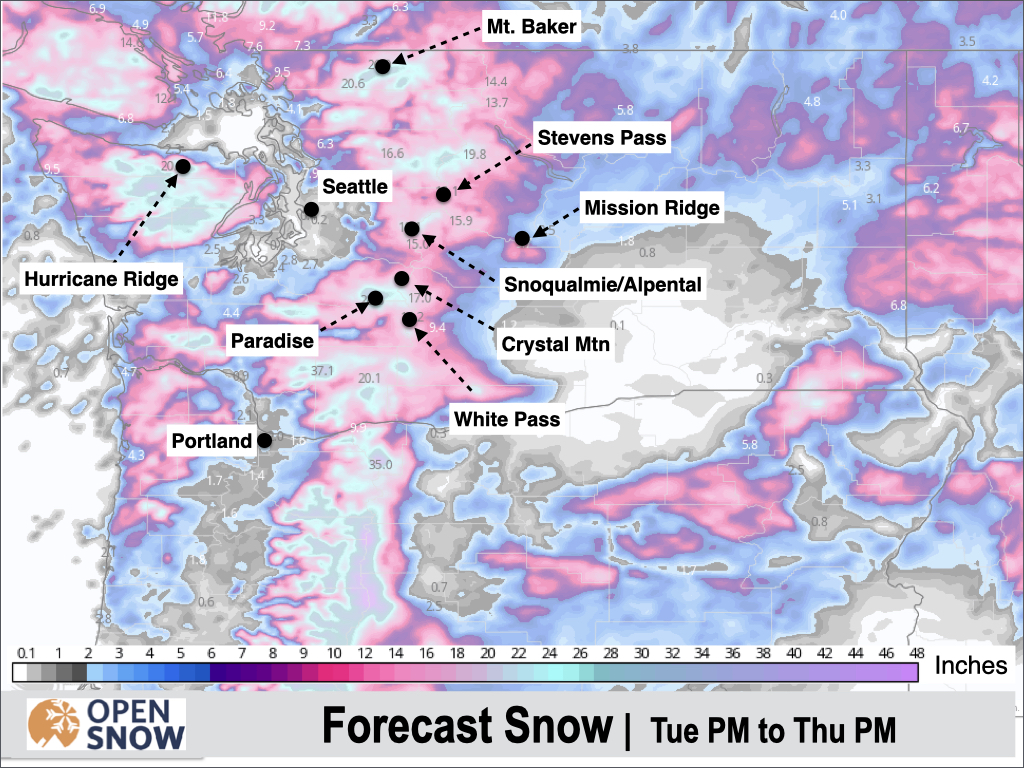 Wednesday will be the deepest day on the slopes, but strong winds, difficult travel conditions, and poor visibility can also be expected, as well as disruptions to lift operations for areas that are open. Thursday will still offer deep and soft conditions along with lighter winds and improved travel conditions compared to Wednesday.

The next storm will arrive on Friday-Saturday and snow levels will remain low, but otherwise, the details are uncertain as models are currently in poor agreement. Stay tuned...

Snow will begin on Tuesday night and will become heavy from early Wednesday morning through Wednesday evening. Snowfall will then become more showery in nature from late Wednesday night through Thursday night, with lower confidence on where the heaviest snow bands set up during the latter part of the storm on Thursday.

For snow totals, I'm going with 10-20 inches for ski areas throughout the Inland NW. Wednesday will be a storm skiing day with heavy snow, strong winds, and poor travel conditions. Thursday will offer the deepest conditions, though gusty winds can still be expected in the morning hours before decreasing in the afternoon. Friday should offer leftovers and continued soft conditions as well.

The Inland Northwest will see a glancing blow from a storm on Friday-Saturday, but it looks like most of the moisture and energy will track too far south for most areas to see anything more than brief light snow. However, models are in poor agreement regarding the storm track, so it's possible this could change (for better or for worse).

Snow is getting underway across Northwest Oregon on Tuesday afternoon and will pick up across all areas on Tuesday night. Mt. Hood will see the highest snow totals overnight on Tuesday night, while snowfall will start out lighter for all other areas initially.

Snowfall rates will then become very heavy across all mountainous regions of Oregon from Wednesday morning through Wednesday night. Moderate to heavy snow showers will continue throughout the Cascades and Blue Mountains on Thursday as well before eventually tapering off on Thursday night.

For snow totals, I'm going with a general 1-3 feet for ski resorts throughout the Cascades, with Timberline and Hood Meadows likely to end up with the deepest totals. Across the Blue Mountains, snow totals will range from 1-2 feet, including Anthony Lakes. 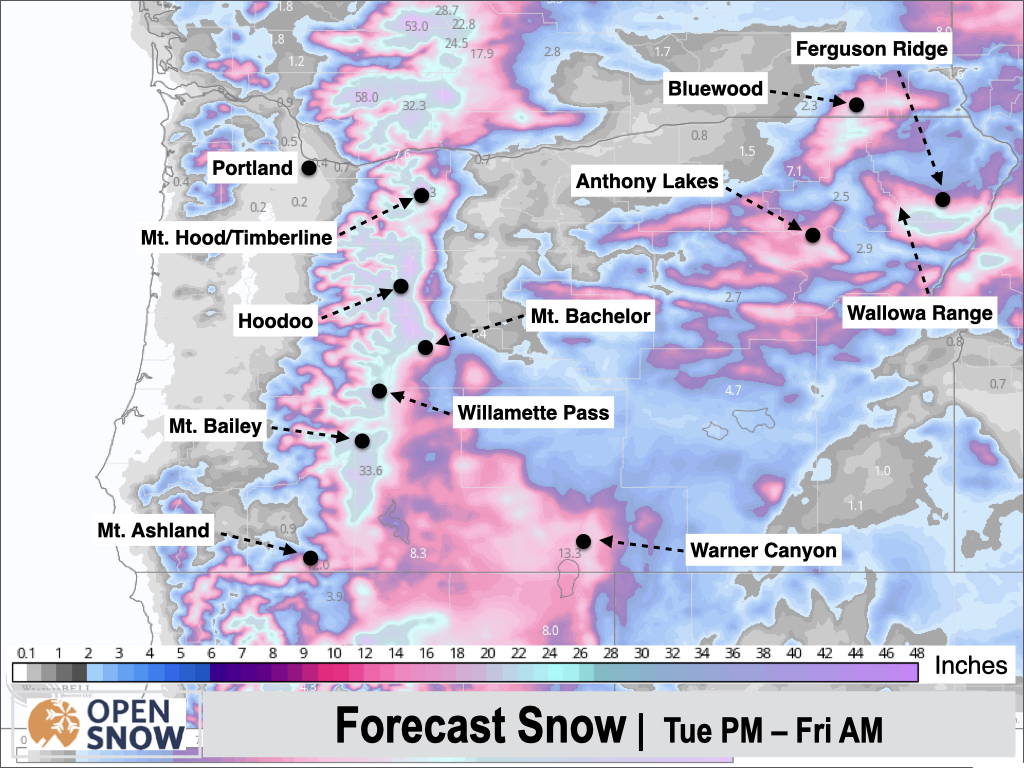 Wednesday will be a storm skiing day, but with tough conditions due to poor visibility, strong winds, and poor travel conditions. Thursday should offer the best skiing conditions with decreasing winds and deep snow totals along with additional refills. Friday will be a great day as well with plenty of leftovers and soft snow conditions.

The next storm will arrive on Friday-Saturday and snow levels will remain low, but otherwise, the details are uncertain as models are currently in poor agreement. Stay tuned...

Another storm is projected to arrive from the west/northwest in the Sunday (Dec 5) to Monday (Dec 6) timeframe. It doesn't look like a particularly strong storm, but will involve low snow levels and looks to favor Washington and Northern Idaho more than Oregon.

A brief break is possible on Tuesday (Dec 6), but then more storms are possible during the second half of next week (Dec 7-11). Temperatures are expected to remain colder than average throughout the week of December 5-11 and this should continue to result in low snow levels and good-quality snow.