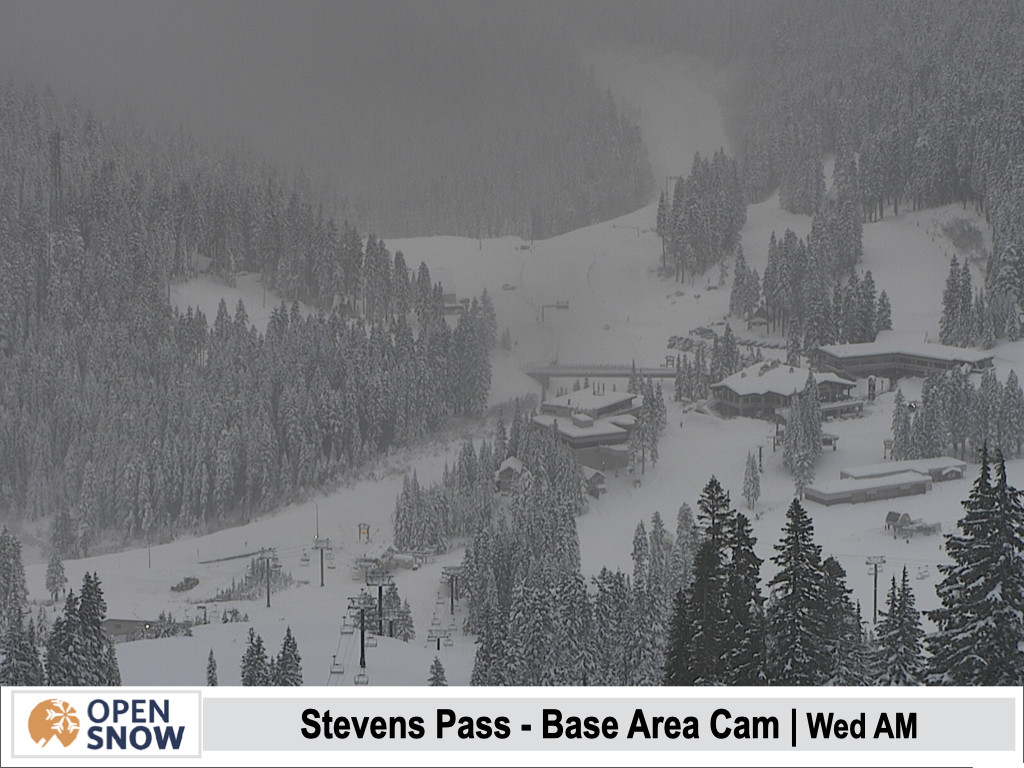 Snow totals of 12-25 inches are coming in across the Cascades from Baker to Hood, while the storm is just getting underway across Central Oregon and the Inland Northwest. Backside snow showers will continue over the WA Cascades on Wed-Thu while the focus of the heaviest snow shifts into Oregon and the Inland NW. After this storm, periods of light snow can be expected Friday thru early next week.

Heavy snow fell throughout the Cascades and Olympics on Tuesday night and snow-liquid ratios have been around 12:1 to 15:1, which translates to good-quality powder snow.

Here are some preliminary snow totals as of early Wednesday morning: 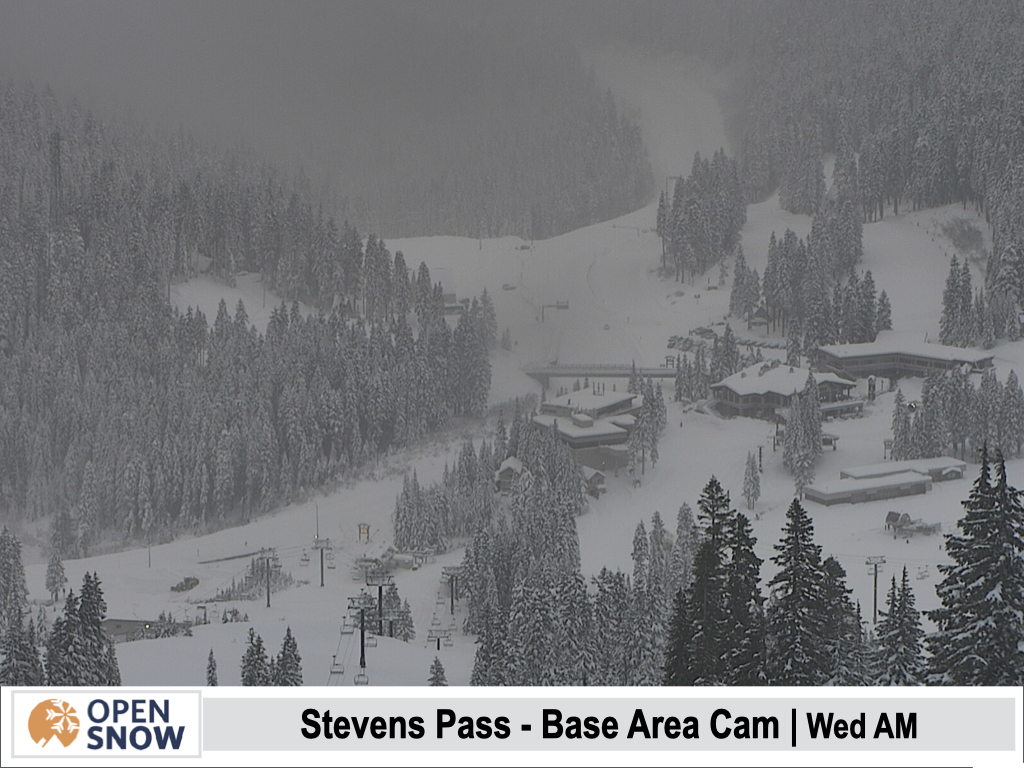 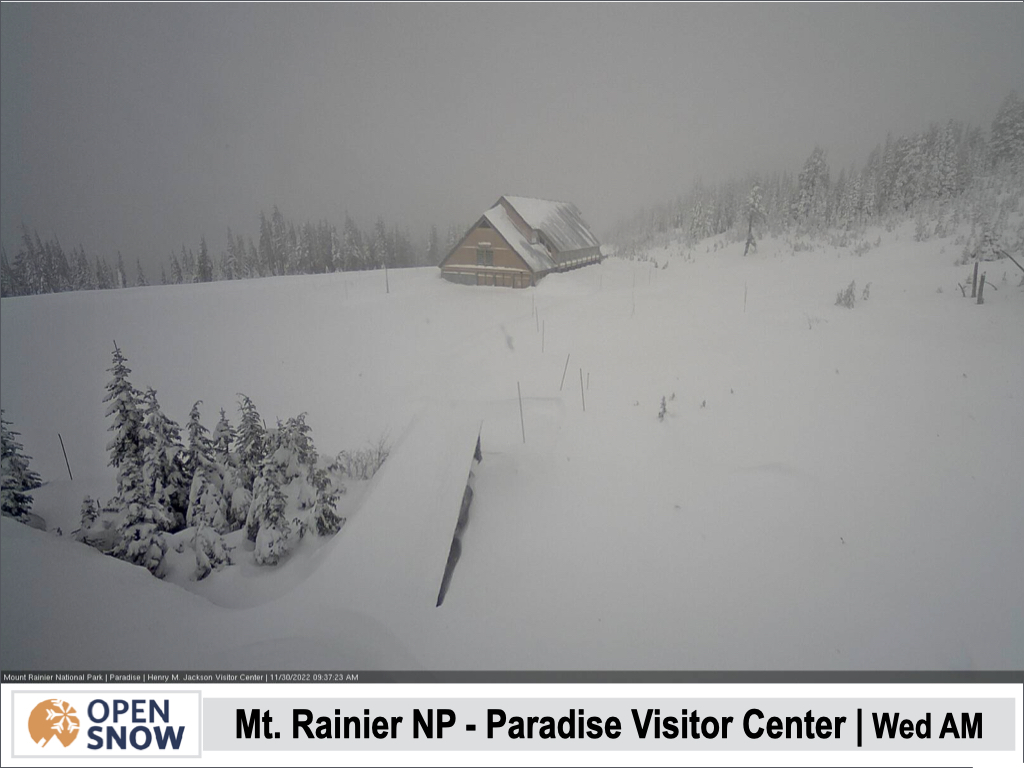 On the back edge of the storm, we're seeing a little bit of clearing (at least for now) over the Olympic Range. Check out this beautiful view of the Olympics as seen from the Hurricane Ridge Visitor Center: 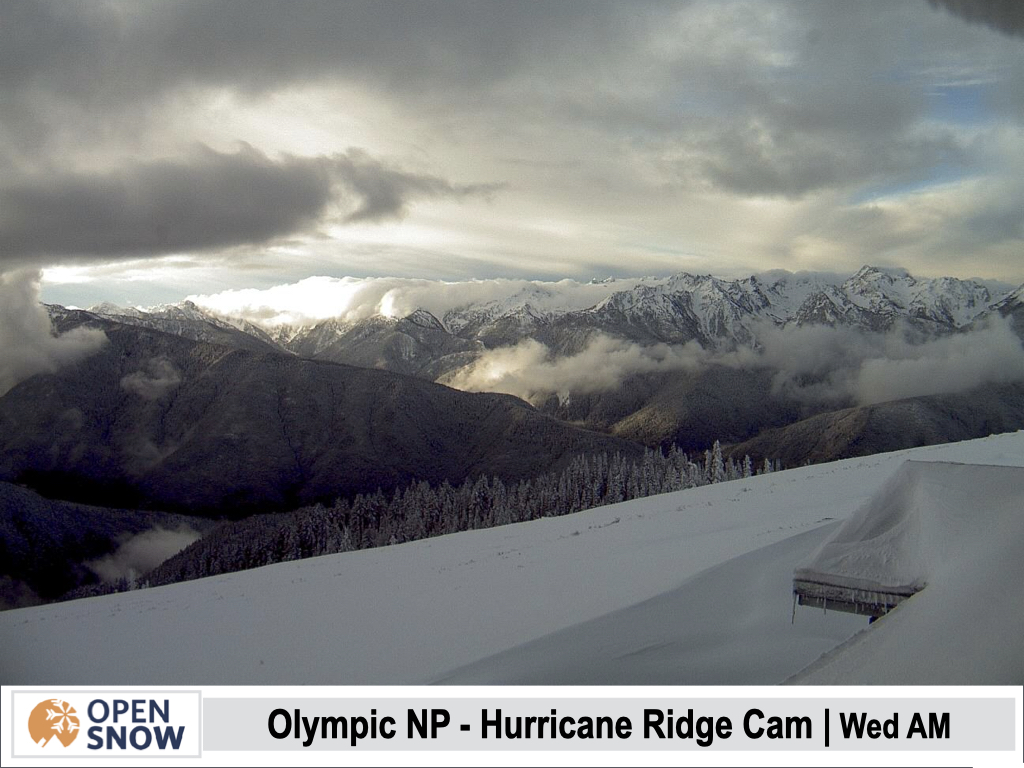 Impacts from this storm extended to the lower elevations of Western Washington as well with accumulating snow down to sea level before changing over to rain overnight. In the foothills of the Cascades, one of our OpenSnow team members reported 9 inches of new snow at 900 feet above sea level (where precipitation has stayed all-snow).

Western Washington is now on the backside of this storm, but lingering moisture and energy along with decreasing stability will result in additional snow showers re-developing at times from Wednesday morning through Thursday afternoon.

Winds will also remain gusty out of the southwest through the day on Wednesday, before decreasing on Thursday.

Additional snow totals from Wednesday morning through Thursday afternoon will range from 6-12 inches across the Central Cascades from Stevens Pass to White Pass, with higher totals south of White Pass. 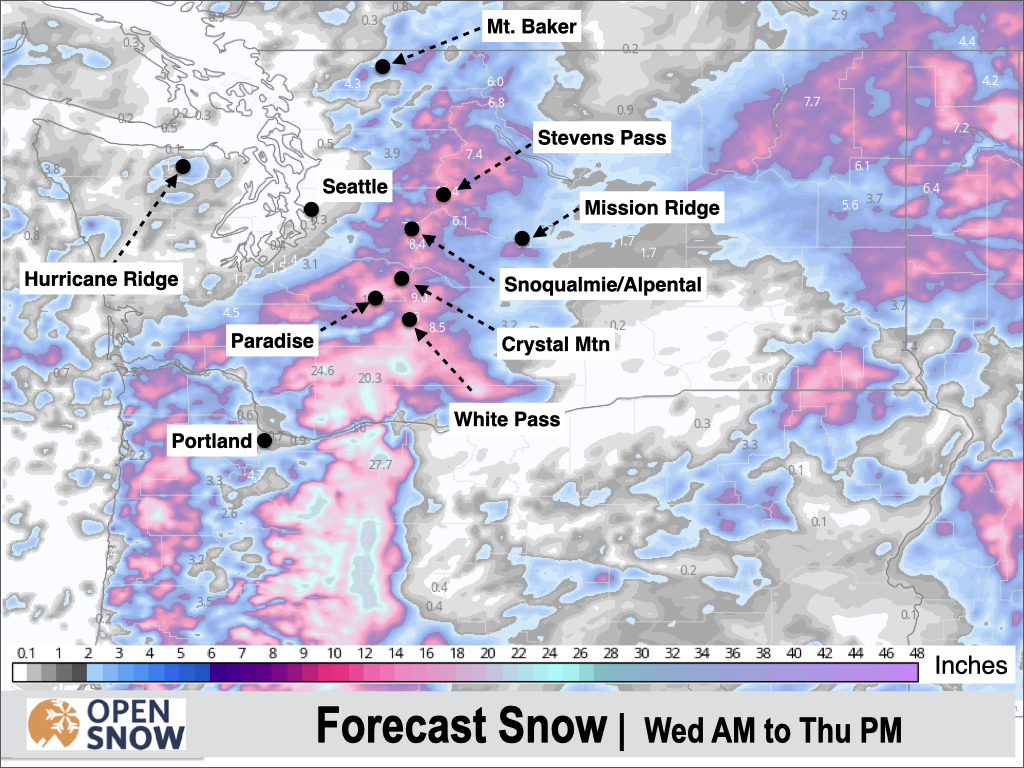 For open areas, Thursday will offer the best snow conditions with deep accumulations along with lighter winds and improved travel. But for areas opening on Friday or over the weekend, excellent snow conditions will persist as a cold airmass remains in place.

Following a break in the snowfall on Thursday night, the next storm will bring a chance of snow from Friday afternoon through Saturday afternoon, but the storm will be weakening as it reaches the coast before progressing further south.

My confidence is fairly low as models have been struggling to get a handle on this system, but I think 2-6 inches is a reasonable outlook for the Cascades from this storm. Snow levels will also remain well below ski resort base areas.

Here are some preliminary snow totals across the area as of early Wednesday morning:

49º North has been the big winner so far and things are looking good out there. 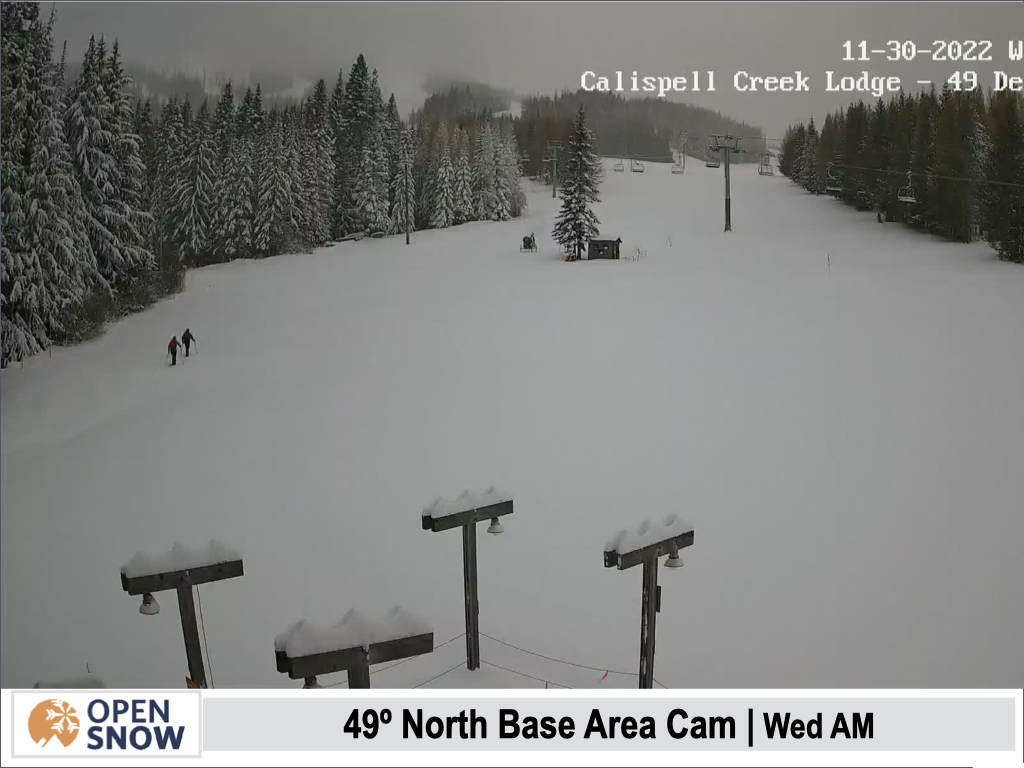 Mt. Spokane is also off to a good start, as evidence by its snow stake cam: 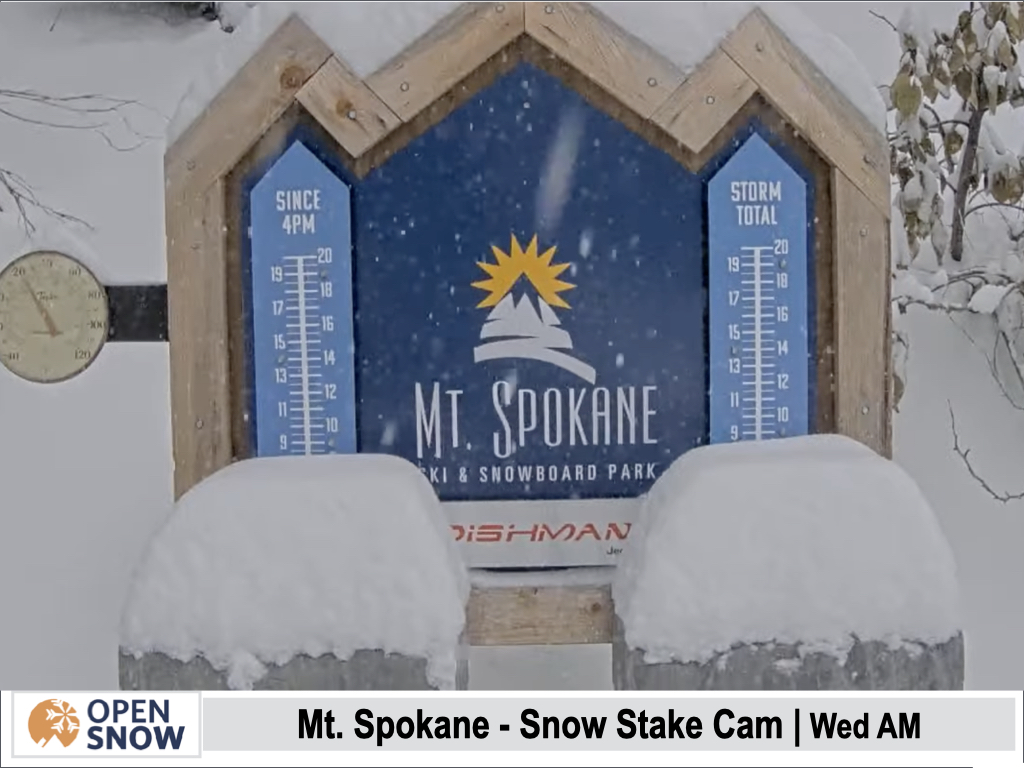 Heavy snow will continue across the Inland Northwest throughout the day on Wednesday and into Wednesday evening with the focus of heavy snowfall shifting eastward into the Panhandle. Snowfall will become more showery and intermittent from late Wednesday night through Thursday evening, before tapering off to flurries late Thursday night.

Additional snow totals from Wednesday morning through Friday morning will range from 7-15 inches at Schweitzer, Mt. Spokane, Silver, Lookout, and Bluewood, while 49º North will pick up another 5-10 inches since widespread heavy snow will be ending sooner there. 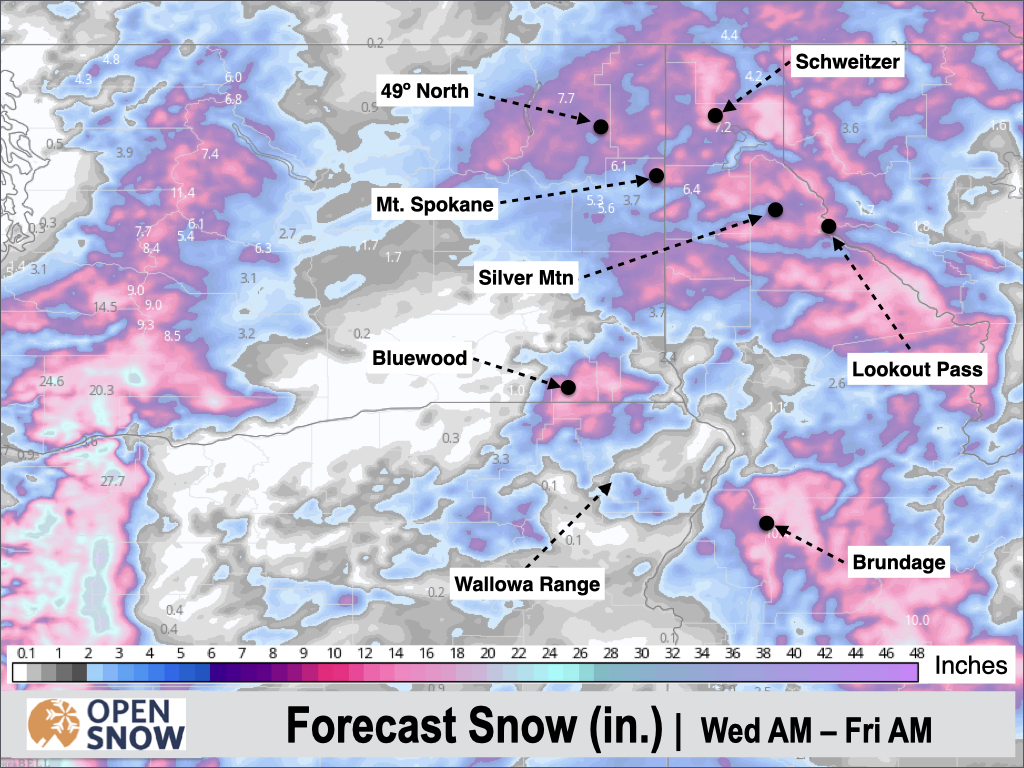 Thursday will be a deep powder day, but strong winds and poor visibility will impact travel and could impact some higher-elevation lift operations (at least early in the day). Friday will offer plenty of leftovers and soft snow conditions as well.

A weak storm will reach the Northwest Coast on Friday afternoon, and we could see a little bit of moisture reach the Inland Northwest from Friday night through Saturday, but confidence is low as models are in poor agreement. For now, I would expect anywhere from zero to 3 inches across INW ski areas from late Friday through Saturday.

Heavy snow fell throughout the Mt. Hood area on Tuesday night and snow-liquid ratios have been around 15:1, which translates to good-quality powder snow. Snow began across the Central Oregon Cascades (Mt. Bachelor) and Northeast Oregon early Wednesday morning so snowfall totals are lower in these areas so far, but will catch up.

Here are some preliminary snow totals as of early Wednesday AM:

As of late Wednesday morning (at the time of this writing), the snow stake at Timberline had topped 20 inches and was nearly buried. 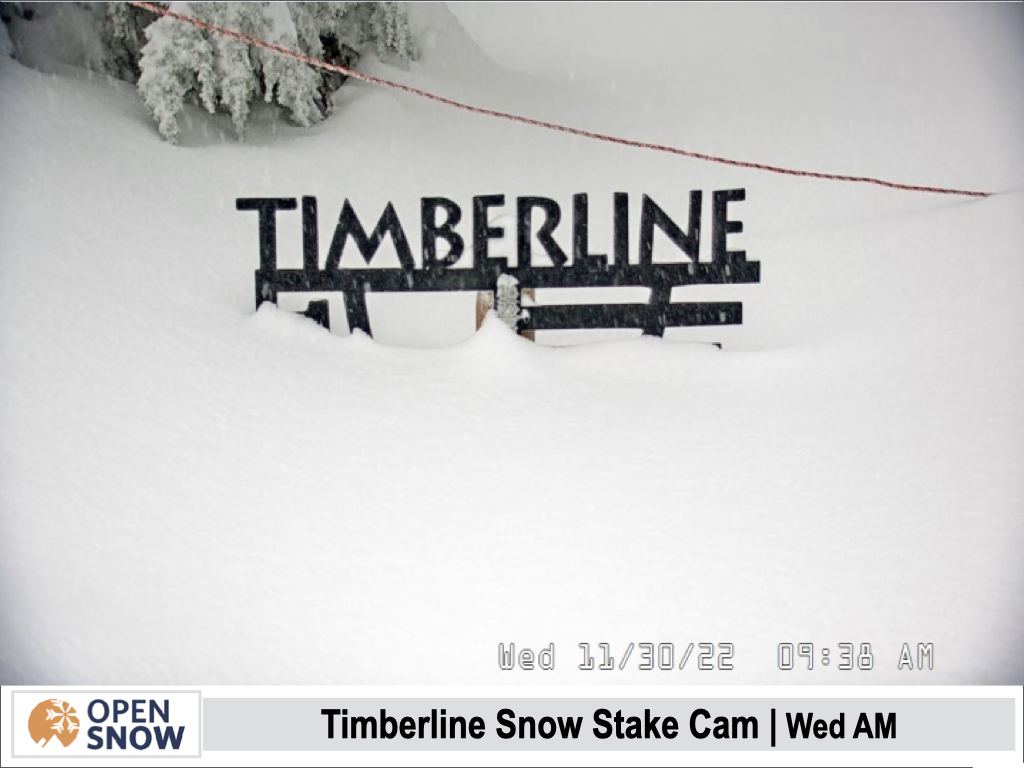 The main change to the forecast is that models are coming in with less moisture/energy across Northeast Oregon, so while the Blues will still see good snow totals, it may be a bit less than previously expected.

Southwest winds will be strong across Oregon on both Wednesday and Thursday (highest gusts on Wed) before decreasing on Friday. Snow levels will also remain low, well below ski resort base areas.

Additional snow totals from Wednesday morning through Friday morning will range from 1-2 feet across the Cascades and 6-12 inches across the Blue and Wallowa Ranges. 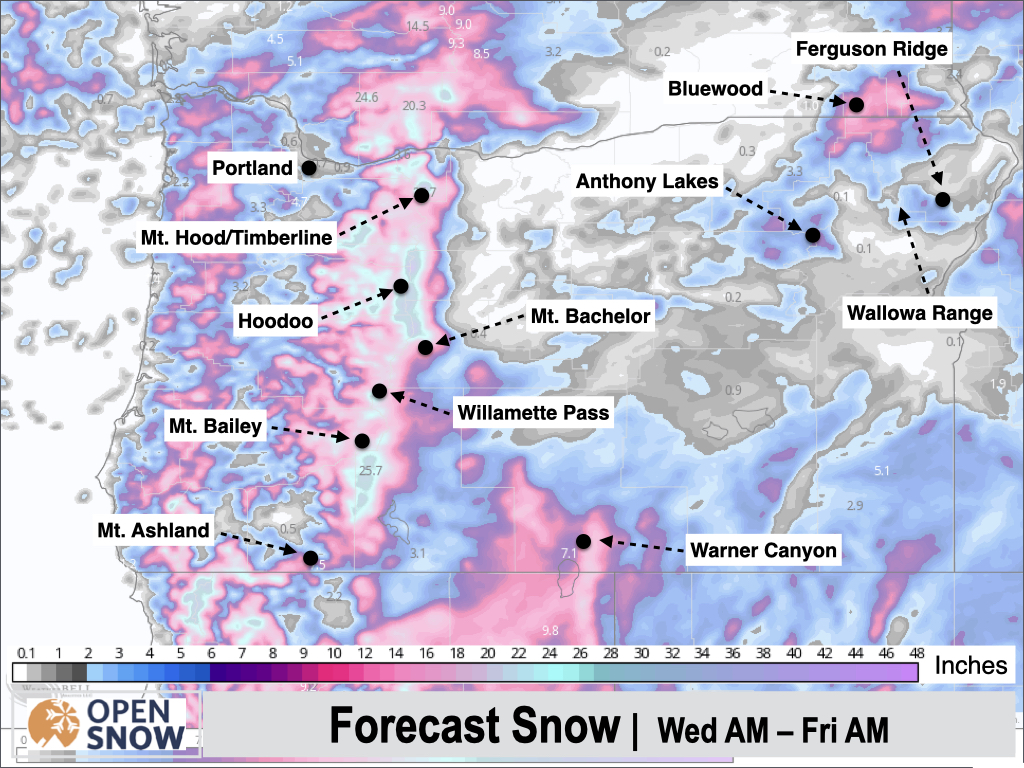 Following a break in the snowfall on Thursday night, the next storm will bring a chance of snow from Friday afternoon through Saturday afternoon, but the storm will be weakening as it reaches the coast before progressing further south.

My confidence is fairly low as models have been struggling to get a handle on this system, but I think 2-6 inches is a reasonable outlook for the Cascades with anywhere from 0 to 3 inches across the Blues. Snow levels will also remain well below ski resort base areas.

The pattern for the week of Sunday, December 4 through Sunday, December 11 will relax a bit compared to the previous week, but the door will remain open for weak storms to arrive on a relatively frequent basis. In terms of timing, models are all over the place so I have no confidence whatsoever on when individual storms will occur.

Temperatures are expected to remain below average based on good consistency from the European and Canadian Models. The American GFS Model has recently trended toward a somewhat warmer pattern, but this model is an outlier so I think it's a less likely solution for now.

Thanks so much for reading! Next update on Thursday (Dec 1).