The Flip to Winter...

- Sun and clouds for Sunday with highs in the 50s and light winds. - Monday we see some colder air move in with breezy conditions. Highs drop into the 30s. Mountain top winds up to 40 mph. - The next storm moves in as early as Tuesday afternoon with heavy snow Tuesday night. Moderate snow showers possible Wednesday with scattered light showers possible through Thursday night. Snow levels very low starting around 4,000 feet and falling below 2,000 feet at times. We could see 1 to 2.5+ feet of snow on the mountains, and 10-20+ inches at lake level. Highs in the 20s Wed-Fri with overnight lows in the teens. Strong winds Tuesday should come down some Wednesday and lighter for Thursday. - We should start to clear out Friday with drier weather into Saturday. The next storm may stall off the West Coast next weekend. We could see some rain/snow push in Saturday night into Sunday. - The storm may stall off the coast with drier weather to start the week of the 2nd, but the storm could push in by the middle of the week with more rain and snow.

From one day to every day, find a pass that fits your season. Ski Vail, Breckenridge, Whistler Blackcomb, Park City, Heavenly, Northstar, and MORE, all on one pass. Don’t wait, last chance to buy is Nov 24 by visiting EpicPass.com

Not too many changes this morning in the forecast. Just a few little tweaks in the details.

We had big inversions form overnight with temperatures in the 20s at the base of the mountains this morning, and 40s on the upper mountains. Expecting a beautiful Sunday with sun and mild temperatures with lighter winds.

Things start to change on Monday with colder air pushing in and gusty winds. Highs drop into the 30s and we could see ridgetop winds to 40+ mph. The good news is that the cold air drops snow levels ahead of the next storm so that it starts as all snow.

Most of the forecast models now show the initial low-pressure center moving in farther north along the CA/OR border like the GFS was showing yesterday. That should shift the heaviest snow farther north into northern CA and Tahoe Tuesday night into Wednesday. 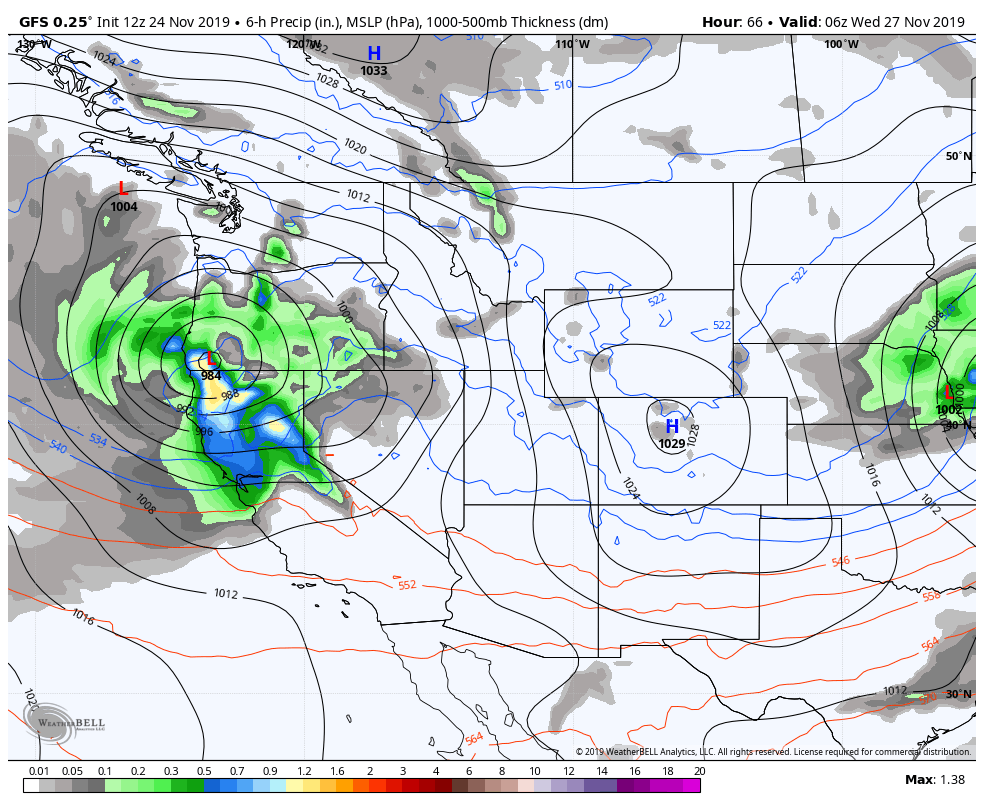 That low moves east into NV while a 2nd low forms along the coast and moves south and then into far southern CA Wed-Thu. That will bring lighter snow showers to the entire Sierra Nevada range. It favors the mountains to our south for snow showers with only light scattered showers expected for us. So the main impacts from the storm are expected to be Tuesday night into Wednesday even though scattered snow showers could last into Friday morning before the storm clears out completely.

We will have to watch for a band of lake effect snow to form somewhere off the north side of the lake with the southwest flow blowing really cold air across the relatively warm lake water. This could form sometime on Wednesday and last into Thursday. Some of the forecast models seem to be trying to pick up on it. 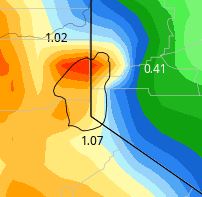 "Trying" is the keyword. That bullseye should be shifted north of the lakeshore and likely northeast more over Mt. Rose. It will be interesting to see if it develops. Outside of that only expecting a dusting up to an inch or two each 12 hour period from Wednesday night through Thursday night depending on where snow showers fall.

Most of the snow is expected to fall Tuesday night into Wednesday. The latest 12z GFS forecast model run is the wettest of the models right now showing over 2 inches of total precipitation possible west of the lake along the crest by Friday. 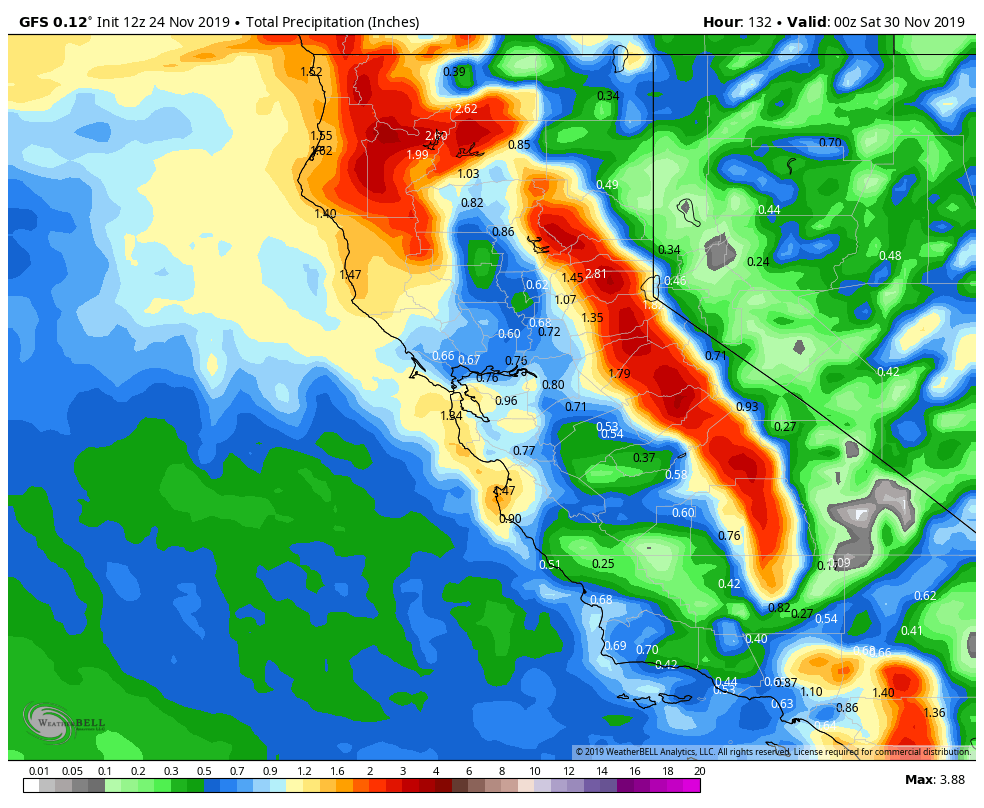 The rest of the forecast models are ranging from fro 1.3 to 1.8 inches of total precipitation. The 100 model average is 1.6 inches this morning, up from 1.3 inches yesterday. Here is a look at the WPCs blended model precip forecast. 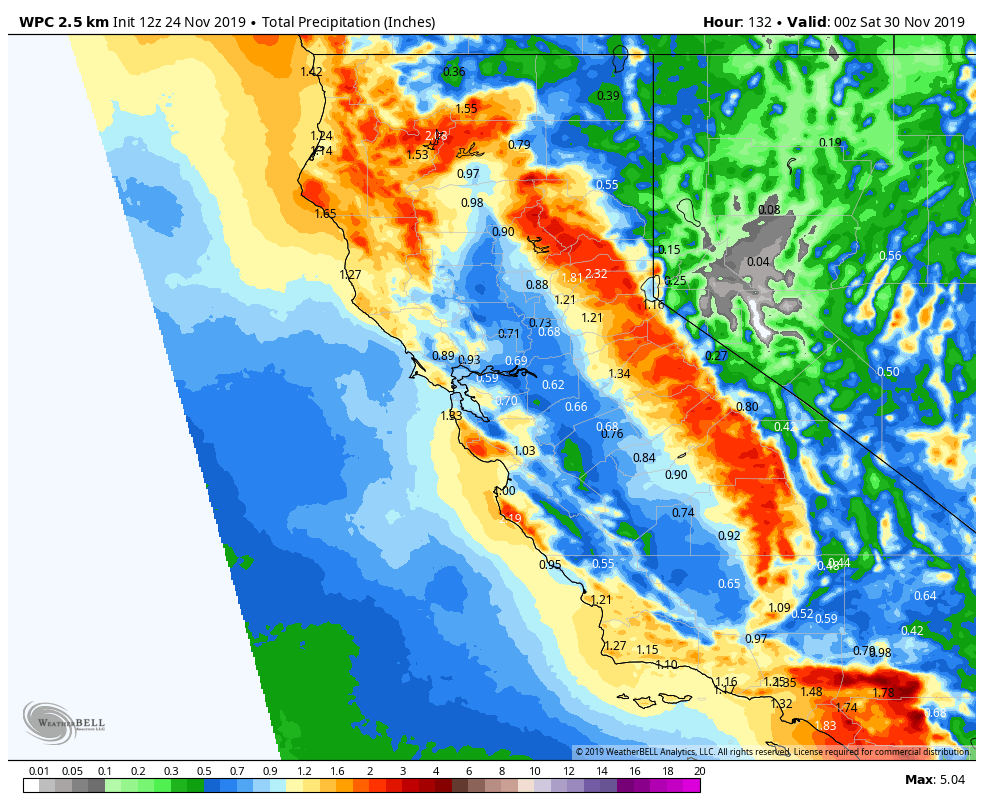 So the trend is wetter with the farther north track. The Euro/GFS model run average is closer to 2 inches thanks to the GFS being so wet. So the GFS is pushing up the overall snowfall forecast a little this morning. We will have to see if the other models continue to come in wetter as we get closer.

The snow could start to push in during the afternoon on Tuesday with ridgetop winds increasing to 60+ mph. The heaviest snow falls overnight and by Wednesday morning we could see 10-15 inches of snow at lake level and 1-2 feet on the mountains. Then moderate snow showers Wednesday could add an additional 3-6 inches with a couple of inches more along the crest. Then like I mentioned above maybe dusting up to 4 inches added by Friday morning from scattered snow showers.

Here is the updated snowfall forecast. The total model average along the crest is up to 33 inches. Below is the GFS/European model average. So I would lean towards the middle/lower end until we see if the other models get as wet as the GFS or it pulls back a little. 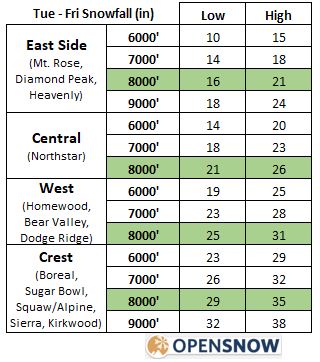 This likely won't be enough snow on its own to get trails open as it will be very powdery snow that will blow around and pack down to very little base. But it will be good for making snow on top of to give the snowmaking on new trails a head start. Highs only in the 20s through Friday mean around the clock snowmaking.

The snowfall forecast in a normal storm, not as cold as this one, would be much less, maybe half of the current forecast. It's the very cold air and high snow ratios up around 20:1 on the upper mountains fluffing up the snowfall for the 12-hour totals. But that quality of snow also settles a lot more as well. So 2 feet will only be 2 feet the day of the storm and then will settle down quickly to less like a deflating balloon.

We should clear out Friday with lighter winds and some sun returning. But clouds could increase again next Saturday. Then the next storm drops south and is off the coast next weekend, but it is cut-off from the jet stream and could sit off the coast until the next upstream system gives it a push.

The question is how close to the coast will it sit. Some of the forecast model runs show it pulling in some decent moisture off the Pacific and point that at northern CA Saturday night into Sunday. 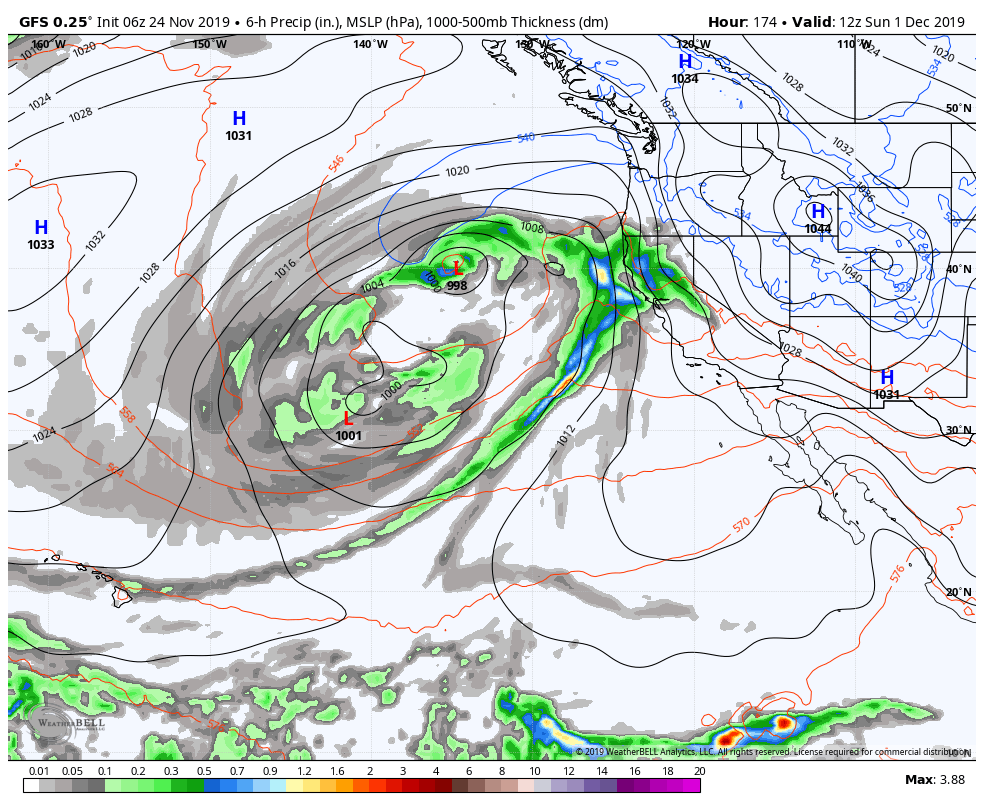 This would also draw in warmer air with snow levels starting low and rising. The warmer air overriding the colder air in place could also help to increase precipitation.

Some of the other model runs keep any precipitation off the CA coast through the weekend and into early the week of the 2nd. Even the model runs that bring some rain/snow Saturday night into next Sunday pull back by Monday with the storm still stalled off the coast.

Then they show the next upstream system dropping out of the northwest by the middle of the week around the 4th-5th pushing in the system off the coast as well as the next storm behind it.

It is too early to really be looking at details like this. But this scenario is being shown by most forecast models. It will be something to watch as it could bring more snow next Sunday for return travel from the holiday weekend. Or we may have a drier pattern for about 5 days before more storms could push into CA during the first week of December.

The long-range forecast models continue to show the ridge wanting to sit in the northeast Pacific with a trough near CA the first 10 days of December. 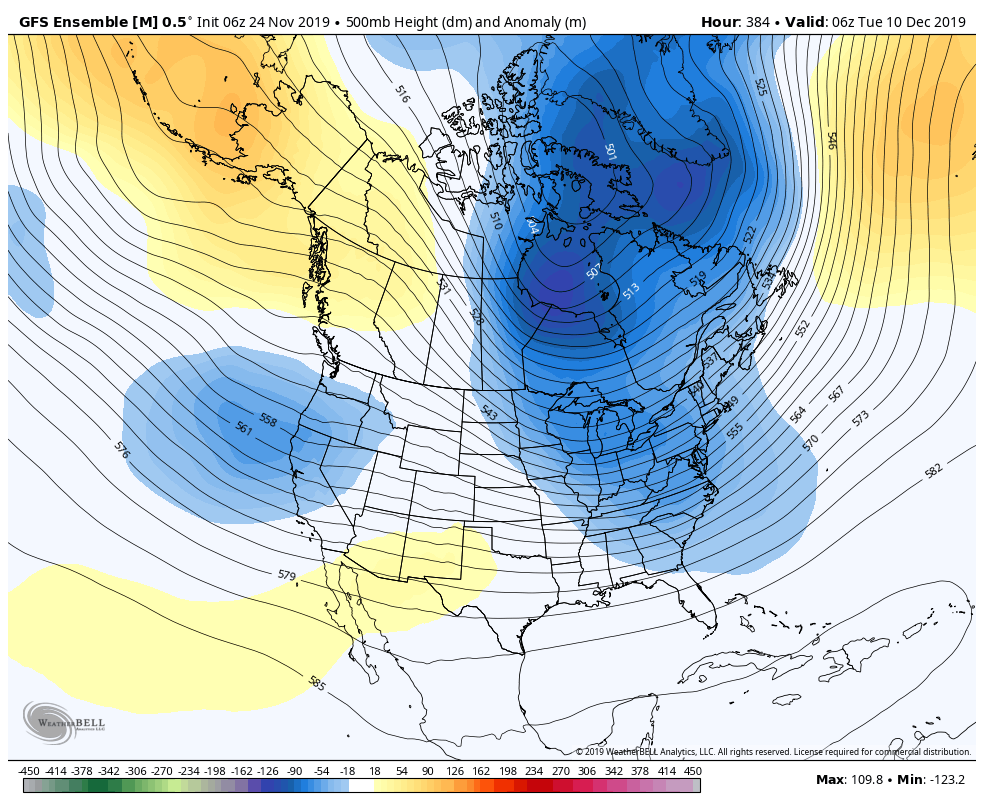 Will we continue to see cut-off low after cut-off low drop down the coast? Hopefully, the pattern stays active so we can continue the fun of tracking storms. 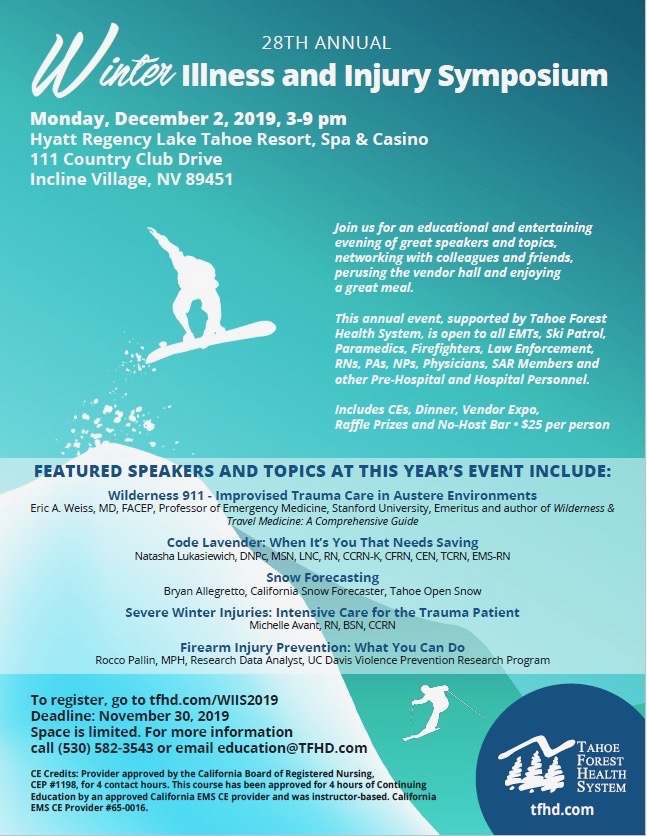