- Expecting mostly sunny skies for Tuesday - Saturday. Highs in the 30s for the upper elevations and 40s for the lower elevations. Close to 50 degrees at lake level Wed - Thu. Northeast winds still gusting to 40+ over the ridges Tuesday. Becoming lighter Wednesday through Saturday before increasing Saturday night. - A weak system could brush us on Sunday bringing gusty winds, slightly colder temperatures, and possibly snow showers. Highs in the 30s. Most model runs show a dusting up to an inch, but some show slightly more so we will keep an eye on it. - We start next week back in a dry and cool pattern with sunny skies and highs in the 30s for the upper elevations and 40s at lake level. The middle of next week some model runs suggest we could see a storm Wed-Thu, so we will keep an eye on that. - The weekend of the 22nd into the week of the 24th we see a dry pattern. Watching to see if we could see any storms the last couple days of the month, or if we will end the month on a dry note.

Not much change to the forecast this morning. Still expecting a fairly dry pattern with seasonal temperatures. Some model runs are trying to throw us some breadcrumbs with a weak system on Sunday and the middle of next week. Watching March closely to see if we could have a comeback after a dry January and February.

We are still seeing some northeast wind gusts on the mountain top sensors to 50+ mph this morning. Winds could gust to 40+ mph through Tuesday. Highs in the 30s above 8,000 ft. and 40s for the lower elevations. The winds will make it feel colder for the upper elevations today as well even with mostly sunny skies.

The winds should become lighter Wednesday through Saturday before increasing Saturday night ahead of the next system. Expecting mostly sunny skies throughout the period. Highs in the 30s for the mountain tops and 40s for most elevations from 8k and below. Maybe close to 50 at lake level Wed - Thu with the ridge closer to the coast and high pressure over CA.

The system that looked like it could brush us on Friday has trended north and east as it moves through. That has been the trend with systems lately, they look slightly wetter a week out and trend drier as they get closer.

The latest forecast model runs show a small AR for the Pacific NW Saturday. A trough and low pressure drop down from the north Saturday night into Sunday. That will bring a slight cool down to the West for Sunday with highs in the 30s, and gusty winds likely as well. 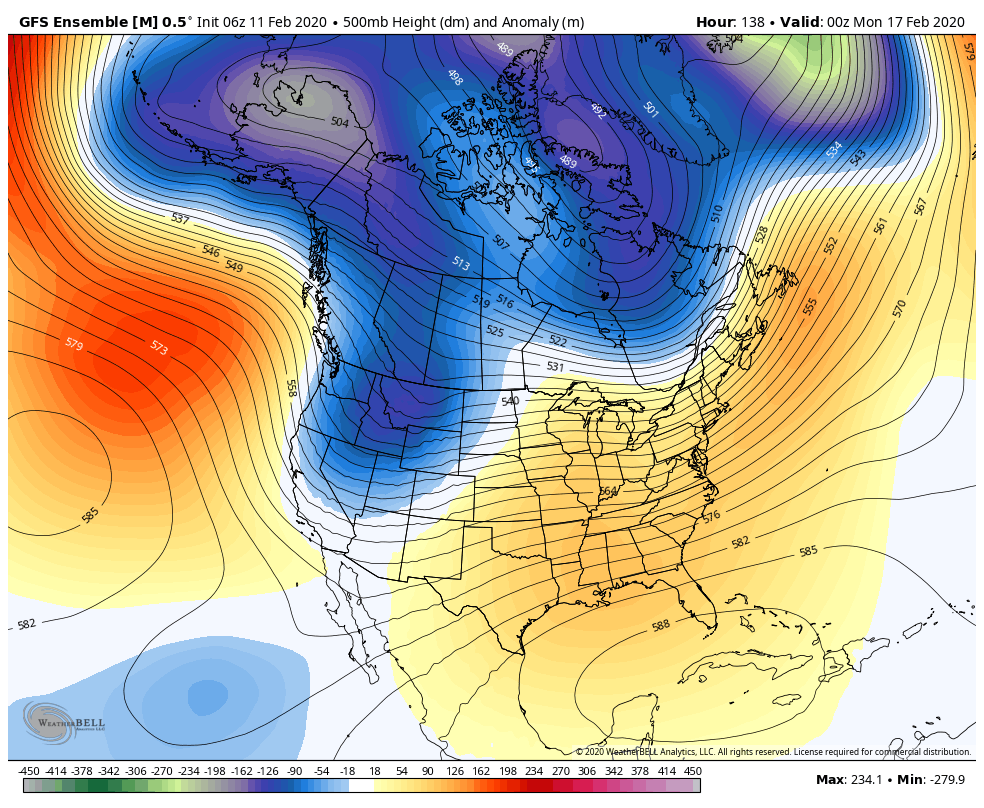 Once again we are on the southwestern edge of the trough hoping for some breadcrumbs as most of the precipitation stays to our north and east. The GFS model is still the only model suggests the system drops down a bit farther south and west with high precip amounts for the northern Sierra. 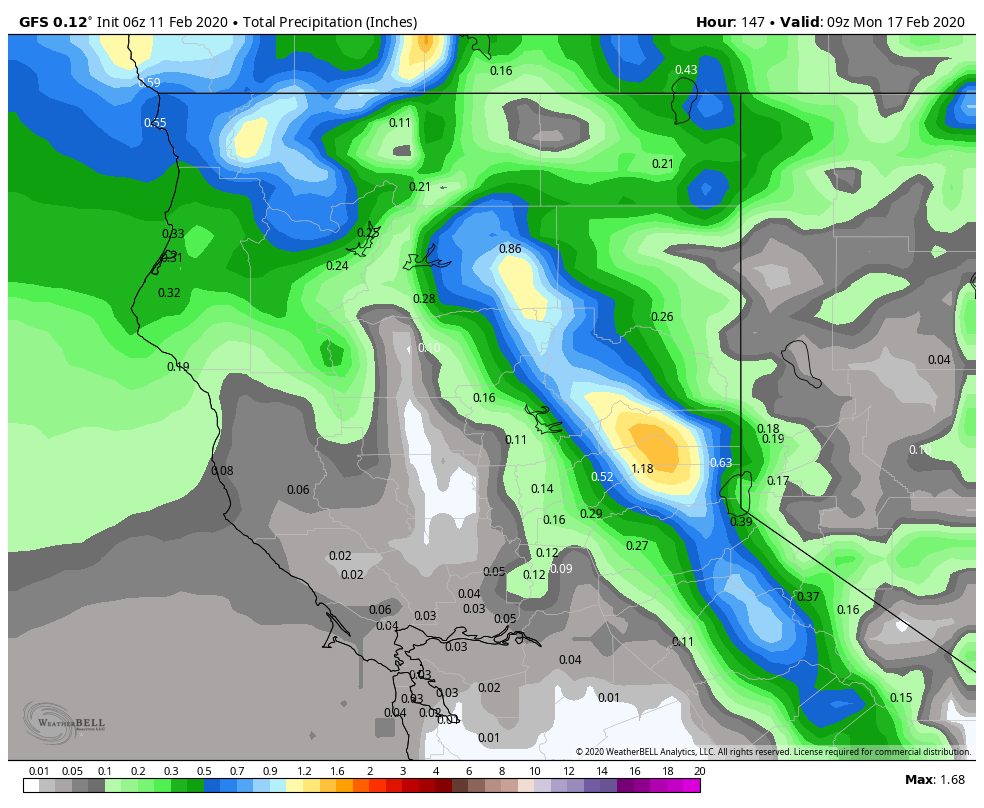 But most model runs including most of the GFS ensemble members show much lighter amounts, with only up to 1-2 tenths of an inch on the high end along the crest. 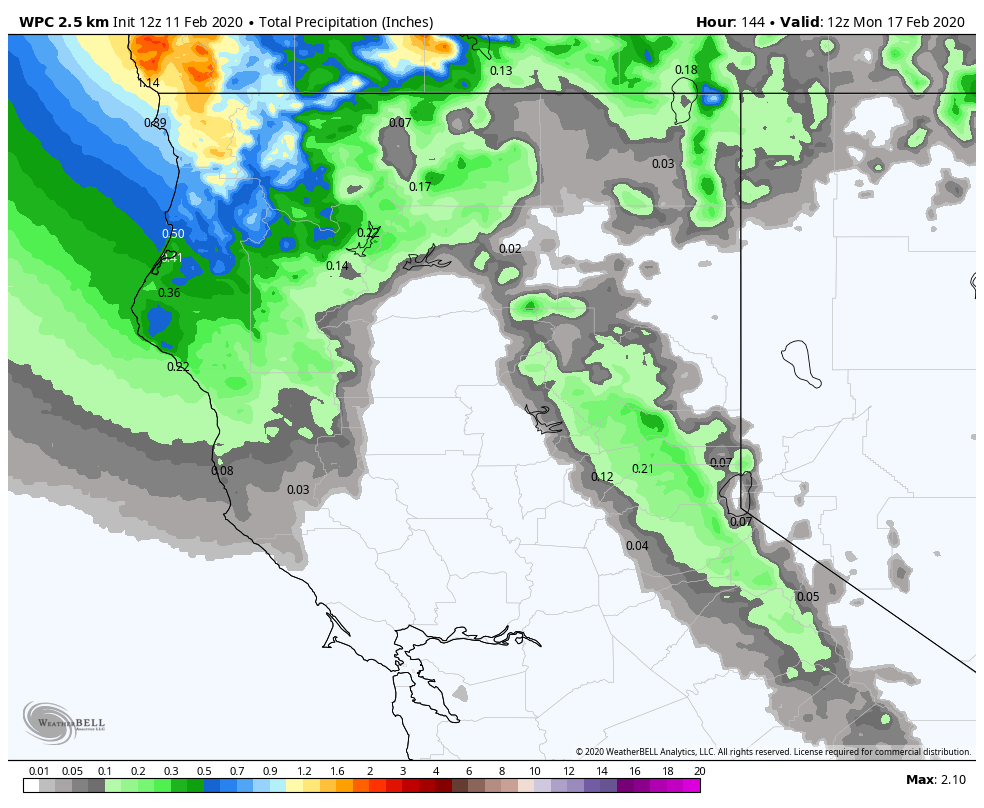 Some model runs show only a dusting, with the average being a dusting to an inch for most mountains and up to 2 inches along the crest by Sunday afternoon. We will continue to watch the trend the next few days to see if the GFS backs off in line with the other models.

The trough begins to move east Monday into next Tuesday. We still have a ridge just off the West Coast and a trough in the West with CA in the middle. We may see sunny skies return with seasonal temperatures. Highs in the 30s for the upper elevations and 40s for lake level. The average high at lake level for this time of year is the mid-40s.

The long-range models were showing a dry pattern for next week. The GFS model keeps the storm track to the north through the week. But the latest runs of the European control model and the Canadian model throw us a few more breadcrumbs. They are showing the ridge off the coast shifting west slightly midweek with a storm digging farther south into CA. 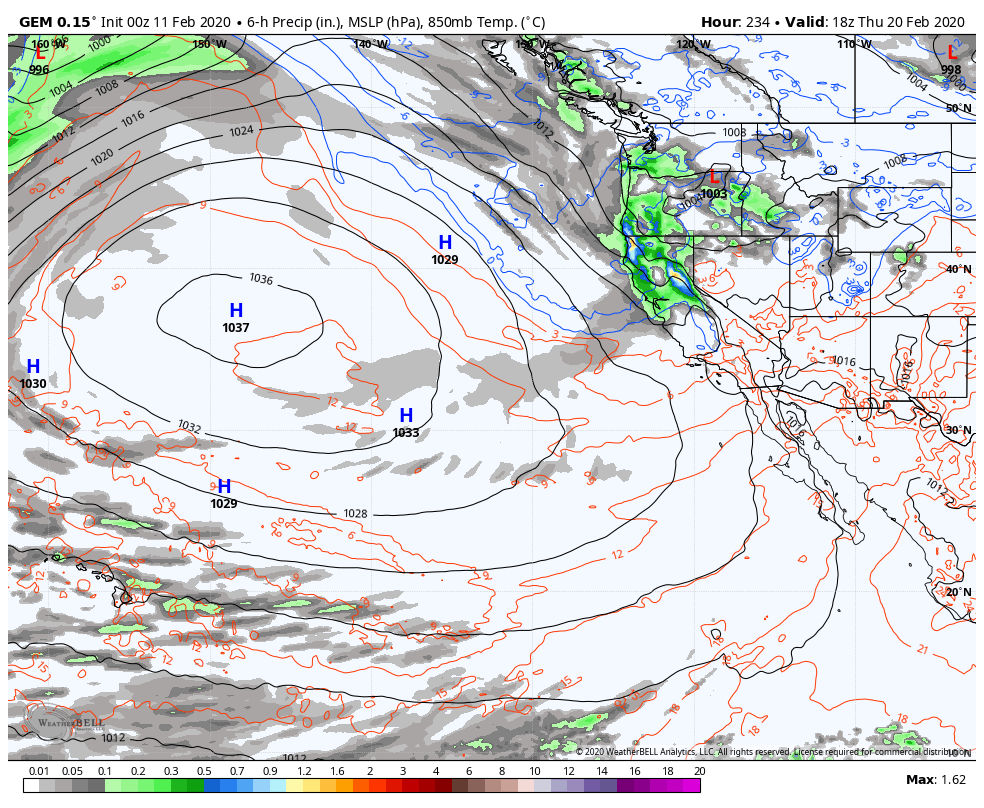 The other models see the storm but have high pressure closer to the coast with the storm track remaining just to the north into the Pacific NW. We will have to watch the trend this week to see if this is just a blip on the Canadian & European models, or if we trend towards the chance for a storm the middle of next week.

There is better agreement on the long-range models that we see high-pressure build in over the West Coast the weekend of the 22nd and into the week of the 24th. 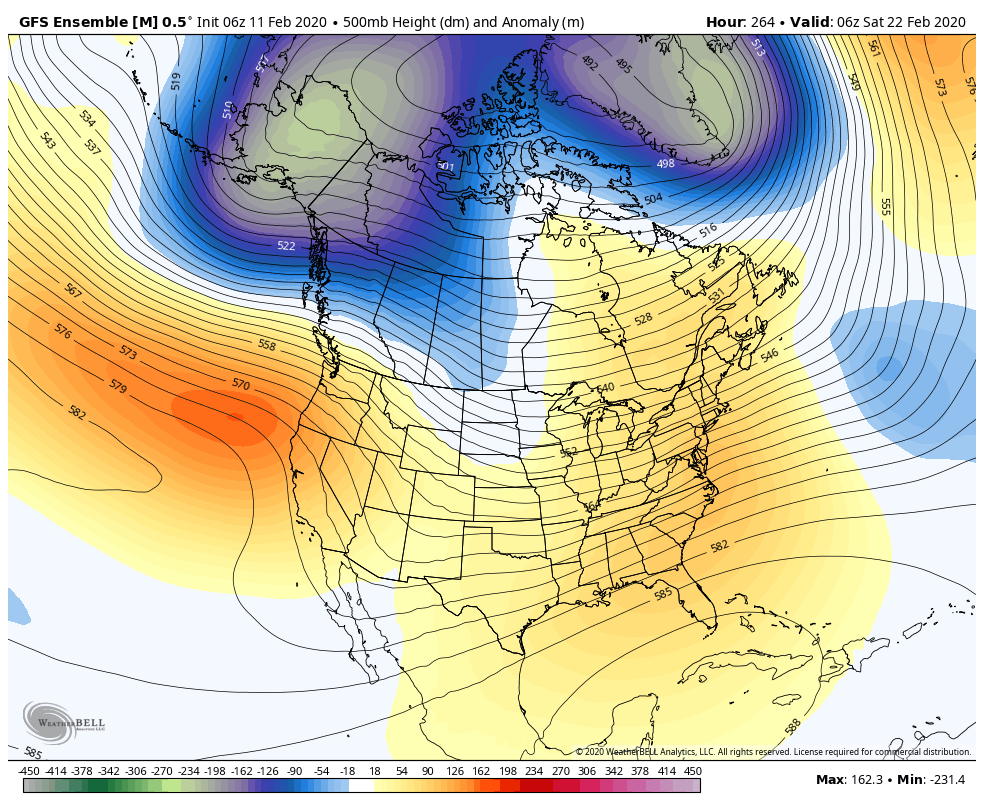 Here is a look at the 2-week total precipitation forecast on the GFS ensemble mean model. The average consensus being very light precip amounts for Sunday, and light amounts if we see a storm the middle of next week. With dry weather outside of that and well below average precipitation for this time of year. The off the coast keeps the storm track just to the north of CA for most of the next 2 weeks. 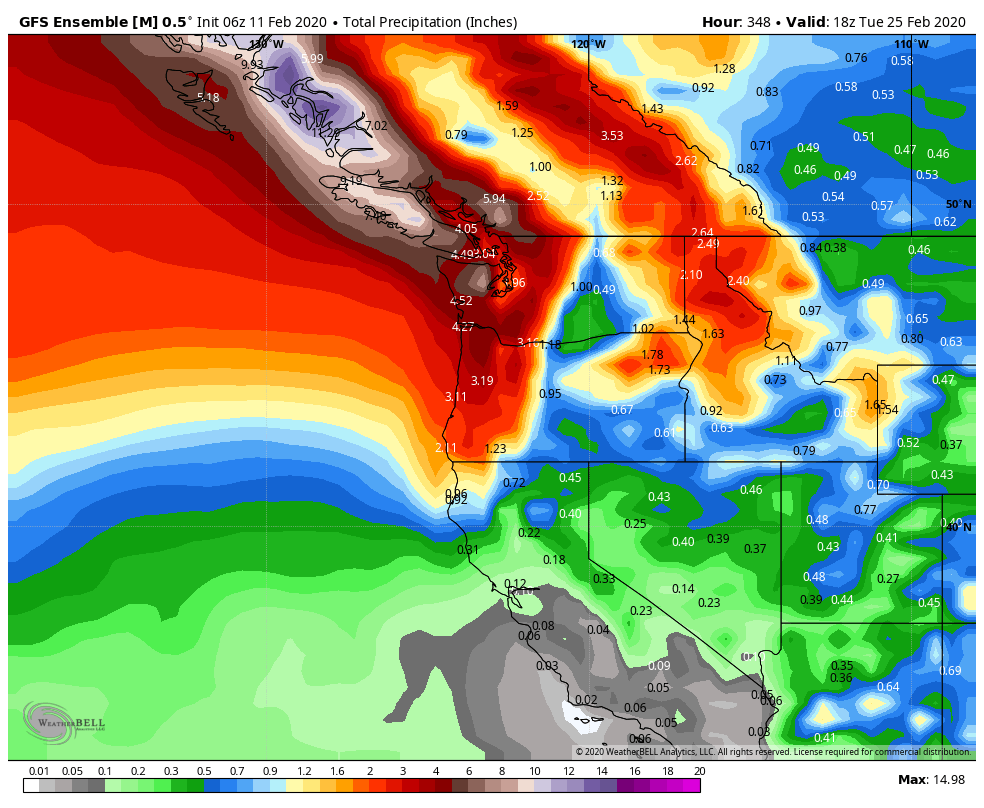 We could stay dry through the end of the month, but we will watch to see if a storm could sneak in the last couple of days.

The European weeklies model that comes out on Monday's was encouraging yesterday. It shows a flip in the pattern going into March with the ridge out near the Aleutians and a trough over the West Coast for most of the month. That would open the door to a stormier pattern if true.

The CFSv2 model has had above-average precipitation starting the first week of March for several days now. 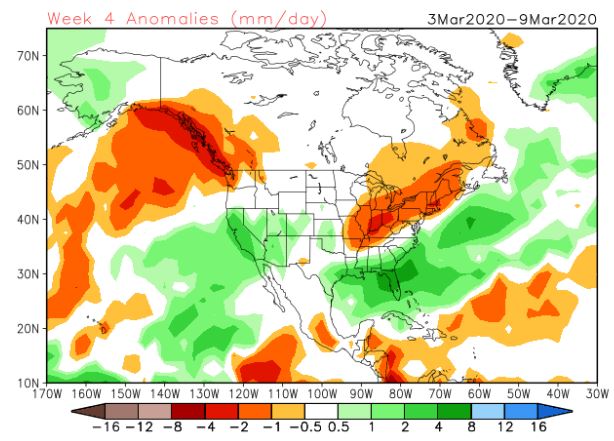 We need to play the game of "let's get week 4's forecast into weeks 3,2, & 1". That may be most of the fun the next few weeks if we don't see any storms of significance pop-up through the end of February. But it's not my favorite game.

The CFSv2 monthly forecast for February had this... 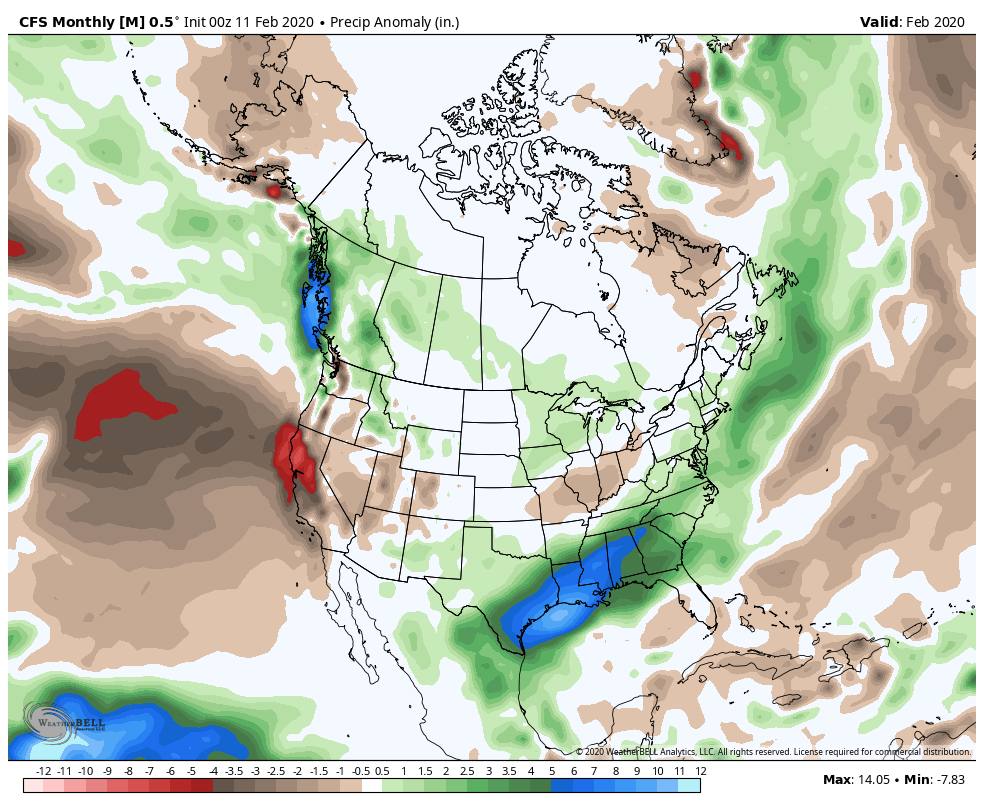 ...and here is the forecast for March. 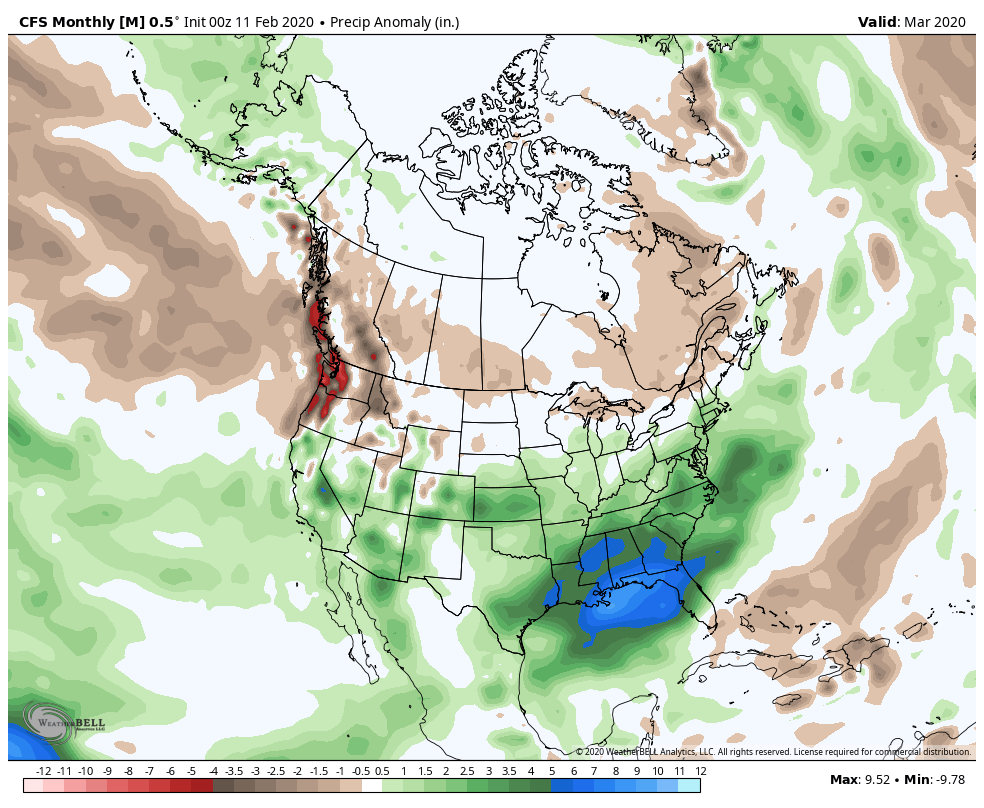 So the CFS and European weeklies may be trying to throw us a whole loaf of bread. This is not a forecast just speculation this far out in the "fantasy" range. The MJO is forecast to become more active across the Pacific from west to east over the next 2 weeks, and possibly into the Indian Ocean in March. We have not seen that since early in the season and those tend to be wetter phases for CA.

The ski areas will be averaging around 45% of average snowfall by the end of the month if we only see a few inches of additional snowfall or less through the end of the month. That sets the stage to qualify for a miracle. Squaw has 207 inches so far and 19% of the seasonal average falls in March on average, which would be around 86 inches. So I would say we would need to see over 100 inches in March to qualify as a Miracle.

I'm not saying we are going to see a Miracle. The long-range models and pattern outlooks look encouraging that it could at least be stormier than February. But that isn't saying much. It would only take one small storm to beat the 2-4 inches we have seen so far this month. It's always fun to dream about a Miracle March this time of year when we are below average for the season. We've seen over 100" 4 of the last 10 March's. So we can dream.

OpenSnow Android App Update
Following the release of the redesigned OpenSnow iOS app, we're excited to bring these fresh updates to the OpenSnow Android app! This update is based on feedback from OpenSnow users during the past year, along with ideas from our employees and forecasters because, like you, we are obsessed with finding great snow. Click HERE to learn more.