- Expecting mostly sunny skies for Wednesday - Saturday. Highs in the 40s on the mountains to near 50 at lake level. Close to 50 degrees at lake level Wed - Thu. Lighter winds expected through Saturday. Saturday could be partly cloudy as the next system approaches. - A weak system could brush us on Sunday bringing gusty winds, slightly colder temperatures, and possibly snow showers. Highs dropping into the 30s on the mountains. Most model runs show a dusting up to an inch at best. Ridgetop winds gusting to 50+ mph from the southwest. - We start next week back in a dry and cool pattern with sunny skies and highs in the 30s for the upper elevations and 40s at lake level. Then warming back into the 40s later in the week. We should see partly to mostly sunny skies through the week with no precipitation. - The long-range models suggest we could see a more active pattern start to set up right near the end of the month into March. But most of February up until the very end looks dry right now.

It's another brilliant blue sky morning with not a cloud in the sky. There are slight inversions this morning as the winds become much weaker last night. Temperatures in the 20s at lake level and 30s on the upper mountains.

Not much to talk about this morning other than the next 2 weeks remaining pretty dry as we have been talking about over the past week. Mother nature was trying to throw us a few bread crumbs with a weak system Sunday and next Wed-Thu, but she took out the dustbuster and vacuumed those up this morning.

The ridge (RRR) is continuing to be anchored near the West Coast through Saturday bringing us sunny skies and keeping the storm track to the north. Highs in the 40s to near 50 at lake level with lighter winds. 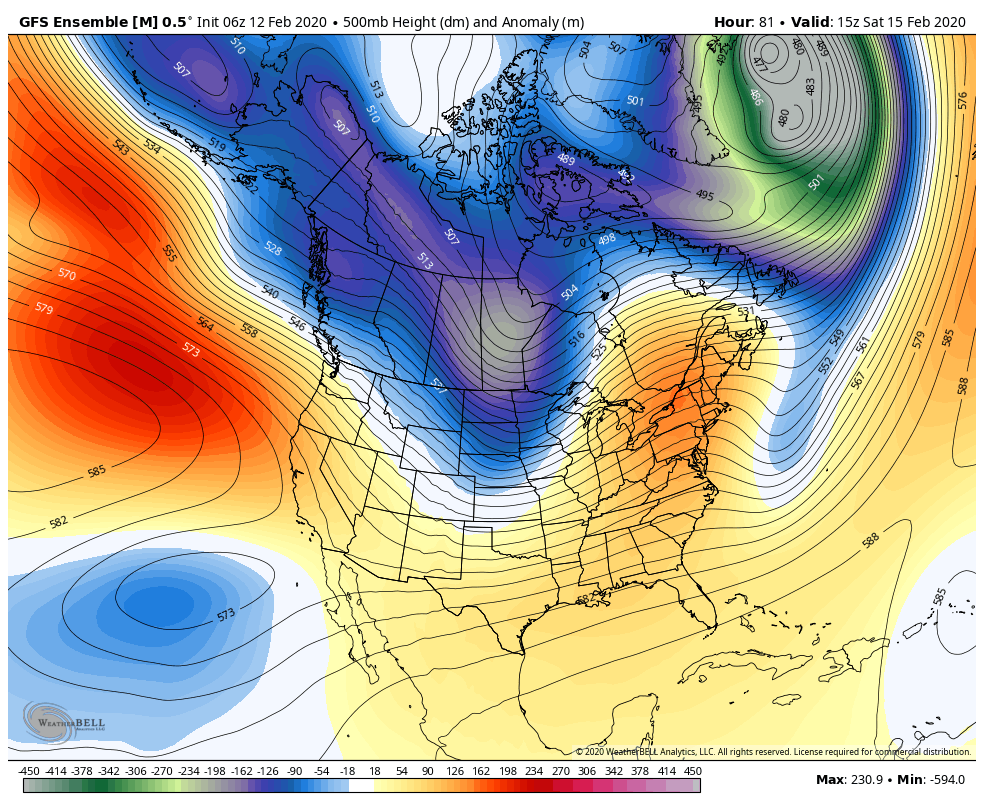 The storm track has been stuck going over the ridge and down into the Rockies. We have had some systems trying to dig a bit farther south and west bringing us dustings of snow, ironically mostly on Sundays. We have another system that will try to do this same thing this weekend.

As with the other systems, the trend with this one as we get closer is for the track to be a bit farther north and east of us. The trough dropping down just to our east Saturday night into Sunday bringing at least colder air and gusty winds. 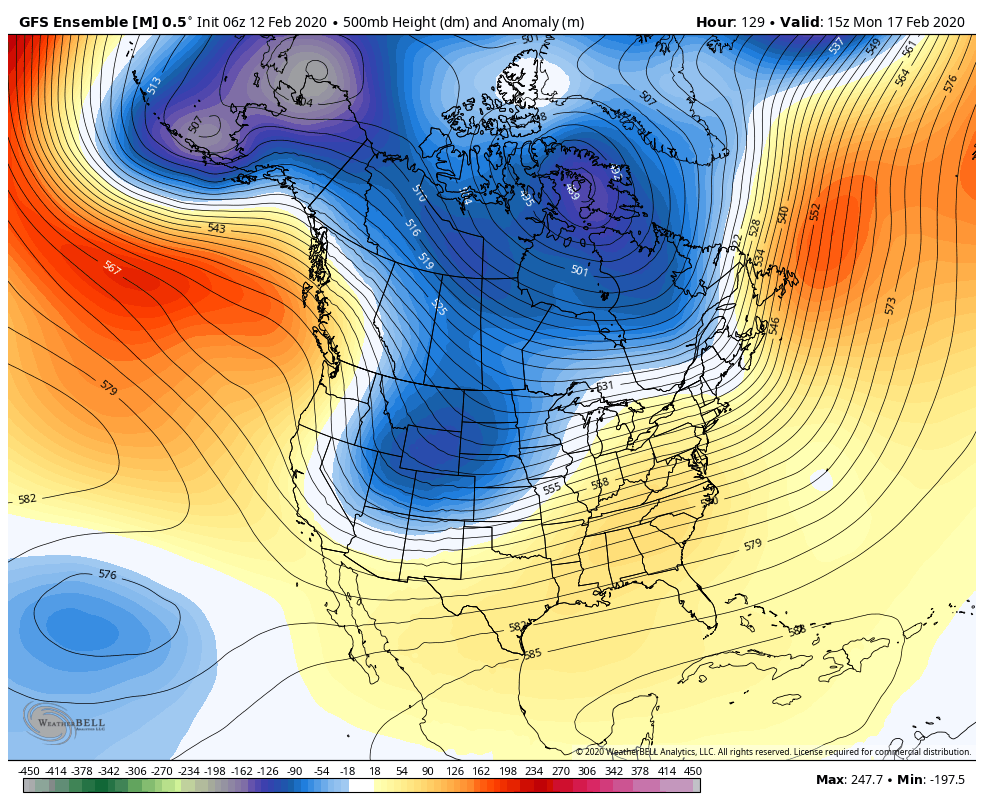 We have only been expecting a dusting to an inch with maybe up to 2 inches on the crest. The GFS model was the wettest all week in showing a track a bit farther south and west. On the 0z run last nigh the GFS model did a complete flip to showing no precipitation for Sunday. 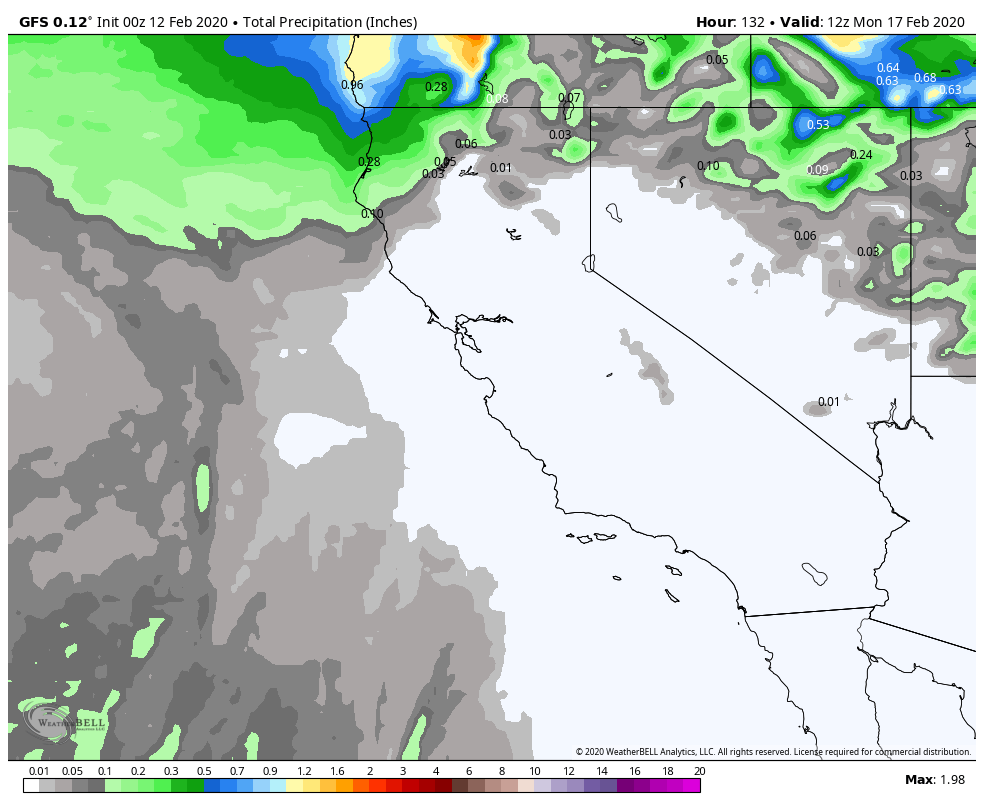 This morning it is back to showing maybe a dusting to an inch of snow. The Canadian model seems to be the most consistent and has been showing this system missing us all week. The European model is now the wettest showing up to 2-3 tenths of an inch of precipitation on the mountains by Sunday afternoon. There are also some ensemble members of the models showing this.

Our auto-generated forecasts for the mountains use the European in their formula which is why you are seeing a few inches forecast for them. Here is a look at the WPC's blended model through Sunday afternoon. 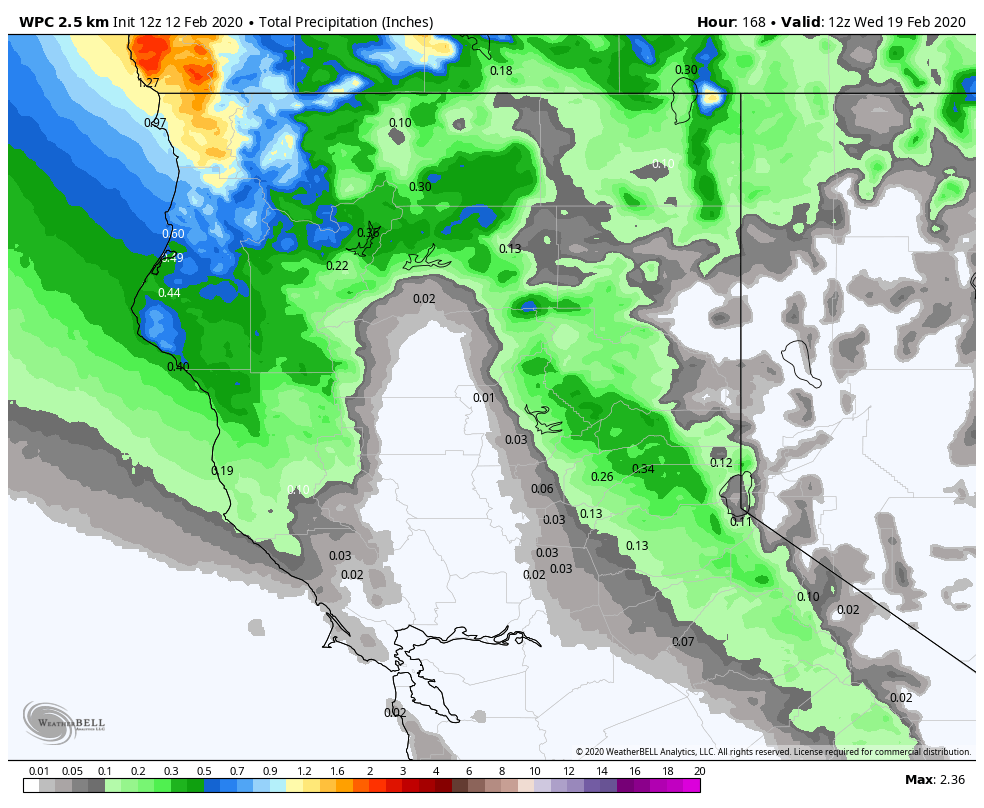 We will have to see if the European model trends towards the GFS and Canadian models. Right now I'd keep the forecast at a dusting to an inch of snow at best on the upper mountains. The snow showers could move through after midnight Saturday night into Sunday morning.

We should see some gusty winds as the front moves through with southwest winds gusting up to 50+ mph over the ridges Sunday morning. Highs dropping into the 30s on the mountains Sunday to near 40 at lake level.

High pressure is still along the West Coast to start next week with a cool east flow. We should see sunny skies and temperatures in the 30s on the mountains and 40s at lake level. High pressure may build in farther inland the 2nd half of the week into the weekend of the 22nd with sunny skies continuing and temperatures warming into the 40s and maybe 50s at lake level eventually.

The system hinted at by the Canadian and European models for mid-week is now forecast to split well off the coast as it encounters the stubborn ridge.

Here is a look at the 2-week total precipitation forecast on the Canadian ensemble mean model. The light amounts for the northern Sierra is from the chance for showers this Sunday and some ensemble runs showing the possibility of a weak system brushing us around the 23rd. 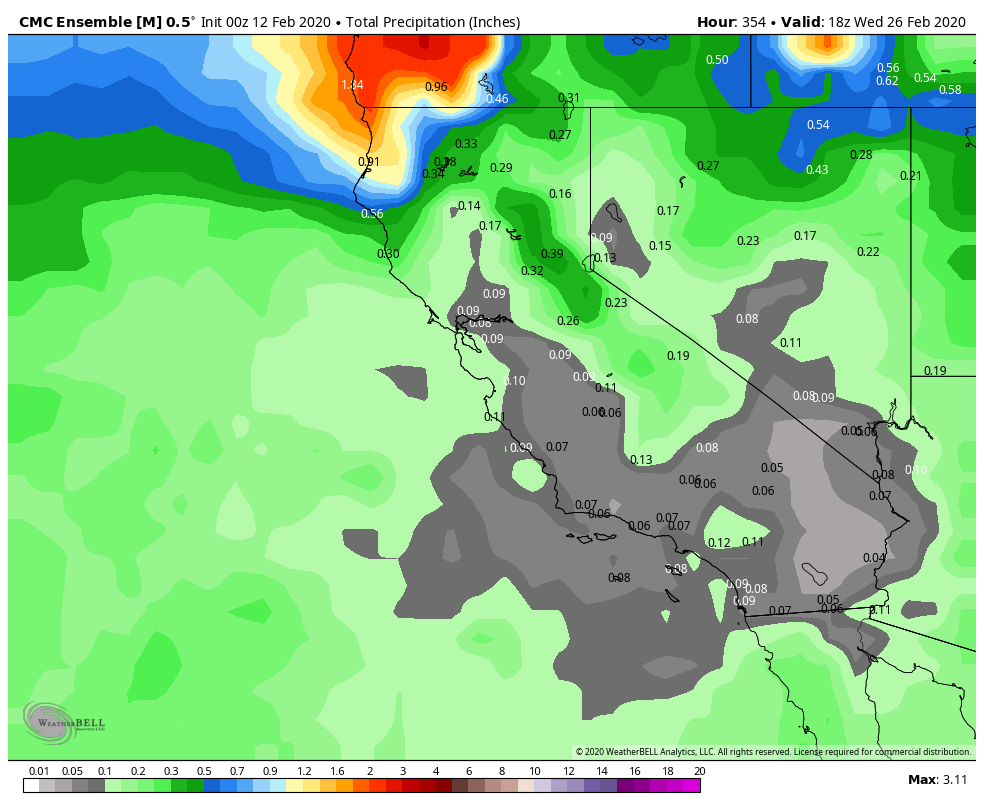 Overall we will see well below average precipitation into the last week of February, and a very dry month overall. So far this month we have only seen 2-4 inches of snow on the mountains with not more than 1-2 inches looking likely at best over the next 2 weeks. 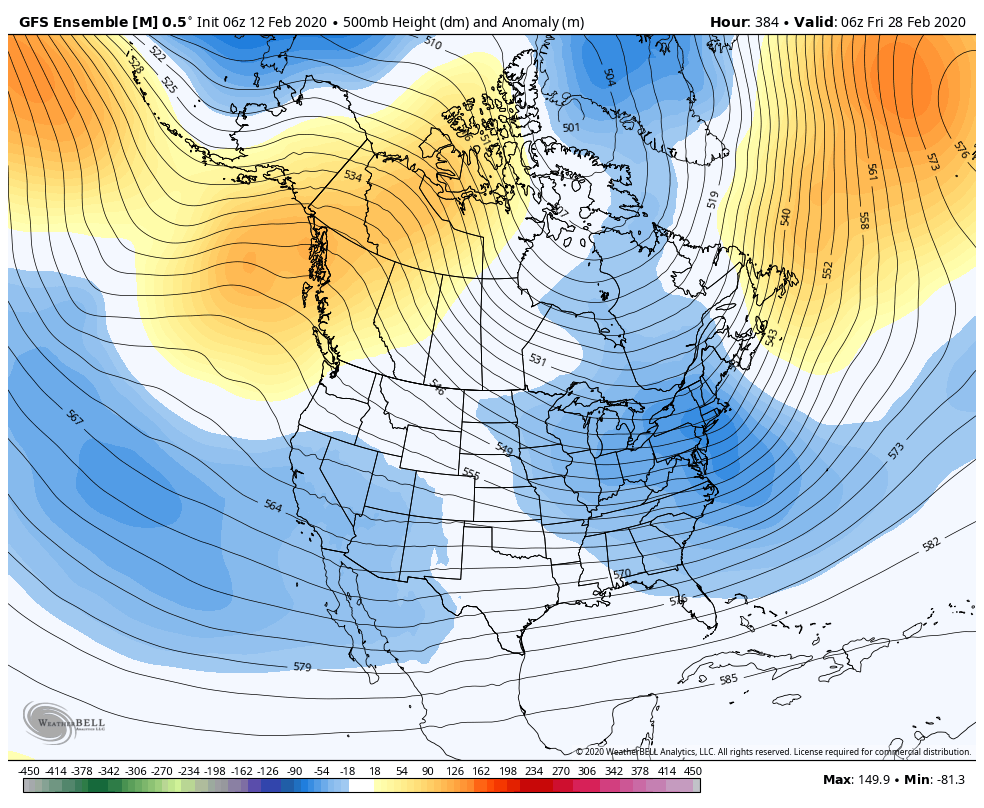 Here is a look at the 6z GFS run showing some precipitation for all of CA right near the end of the month. 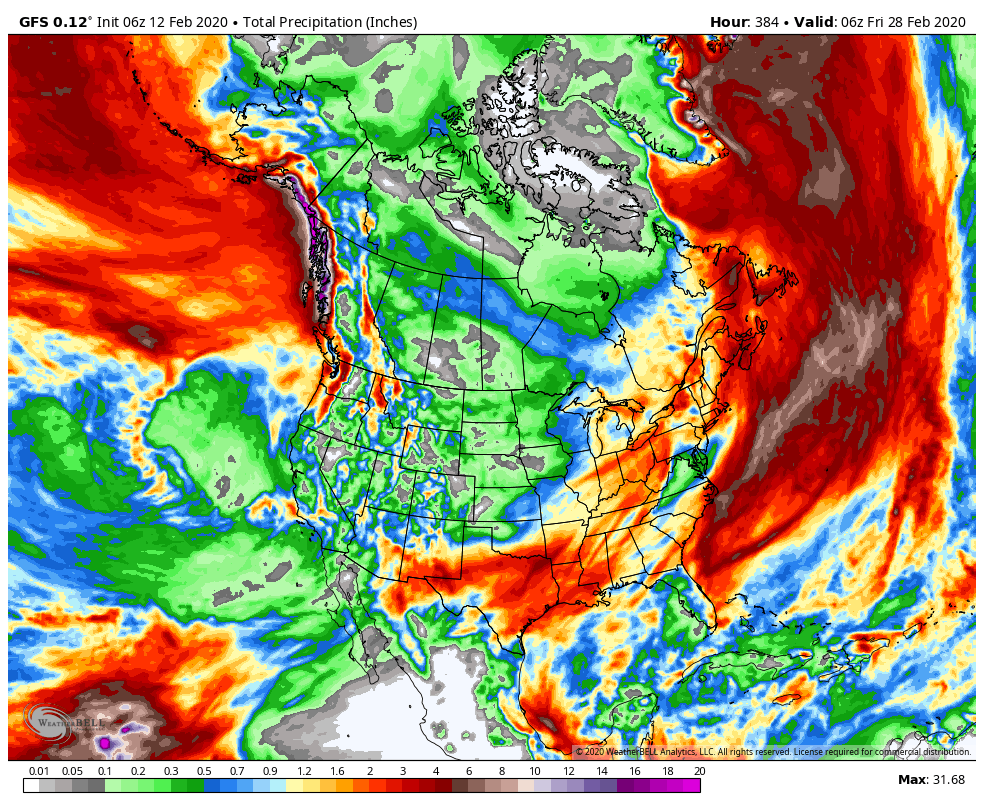 So it remains to be seen if we will get completely out of the month dry, or if we could see a pattern change start to bring storms right at the very end of the month.

Going into March the long-range models suggest we could go back into a negative EPO pattern with the ridge in the northeast Pacific, but this time possibly a bit farther West to the south of Aleutians. That could open the door to more storms dropping into CA from the northwest in March.

Both of these suggested pattern changes on the long-range models make sense if the active phase of the MJO continues through the eastern Pacific and then into the Indian Ocean over the next 3-4 weeks. Being in fantasy range this is all speculation at this point, but it is what we are watching as we don't have much else to watch over the next 2 weeks for storms...