- Expecting mostly sunny skies for Thursday - Friday and increasing clouds for Saturday. Highs in the 40s on the mountains and 50s at lake level. Lighter winds expected through Saturday and then increasing Saturday night. - A weak system on Sunday brings gusty winds, slightly colder temperatures, and possibly a few snow showers. Highs dropping into the 30s on the mountains and 40s at lake level. Maybe a dusting of snow on the mountains at best. Ridgetop winds gusting to 50+ mph from the southwest. - We start next week back in a dry and cool pattern with sunny skies and highs in the 30s for the upper elevations and 40s at lake level. Then warming back into the 40s later in the week. We should see partly to mostly sunny skies through the week with little to no precipitation. - The long-range models suggest we could see a more active pattern start to set up right near the end of the month into the first week of March. But into the last week of February looks fairly dry right now with no significant storms on the horizon.

We are stuck in a dry pattern for now and waiting for a change that may not come for at least 2 more weeks.

Expecting mostly sunny skies through Friday with a few clouds possible as a system moves through to our north. Then a better chance for some clouds on Saturday as the next system starts to approach from the north. Highs into the 40s on the upper mountains and 50s at lake level. Lighter winds expected into the day on Saturday before increasing late Saturday into Saturday night.

A cold trough moves down from the north on Sunday bringing gusty winds and colder temperatures. We are on the western edge with most of the precipitation staying to the north and east of the Sierra. 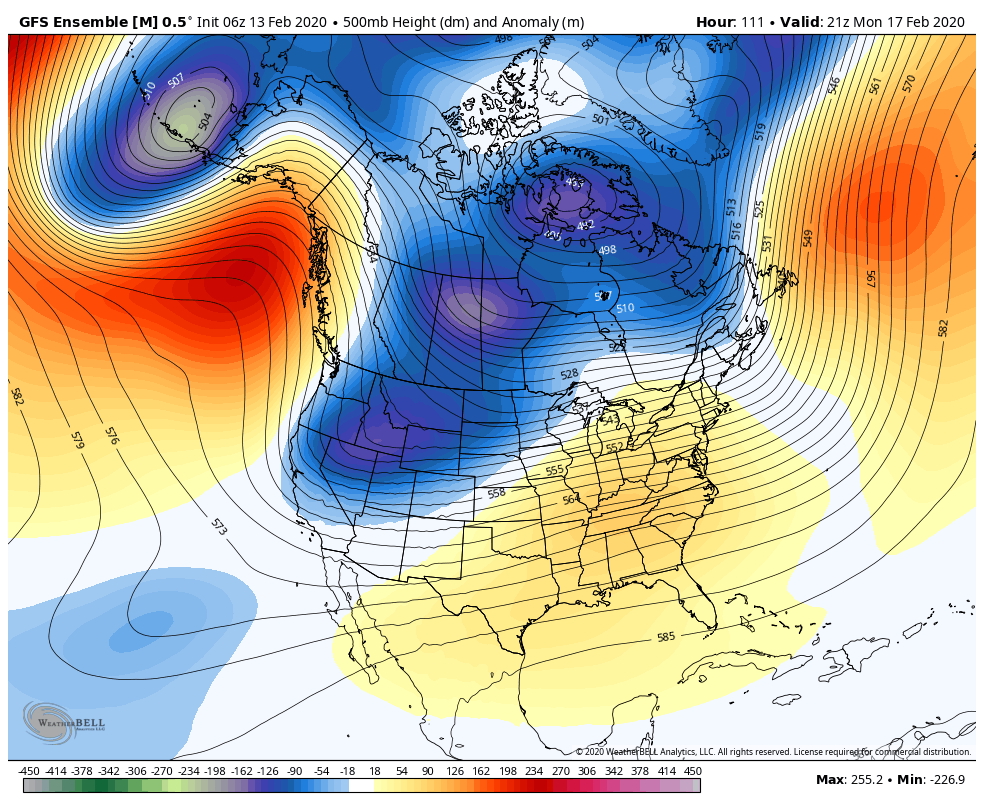 Ridgetop winds could gust up to 60+ mph from the southwest on Sunday which could affect a few upper mountain lifts on the wind-exposed mountains.

We should see clouds and some sun on Sunday with a chance for a few scattered snow showers. The latest model runs continue to trend a bit drier. We never had more than a dusting to an inch forecast all week, but now it looks like a dusting at best if we see any snow showers at all. Here is the latest WPC blended model for total precipitation. 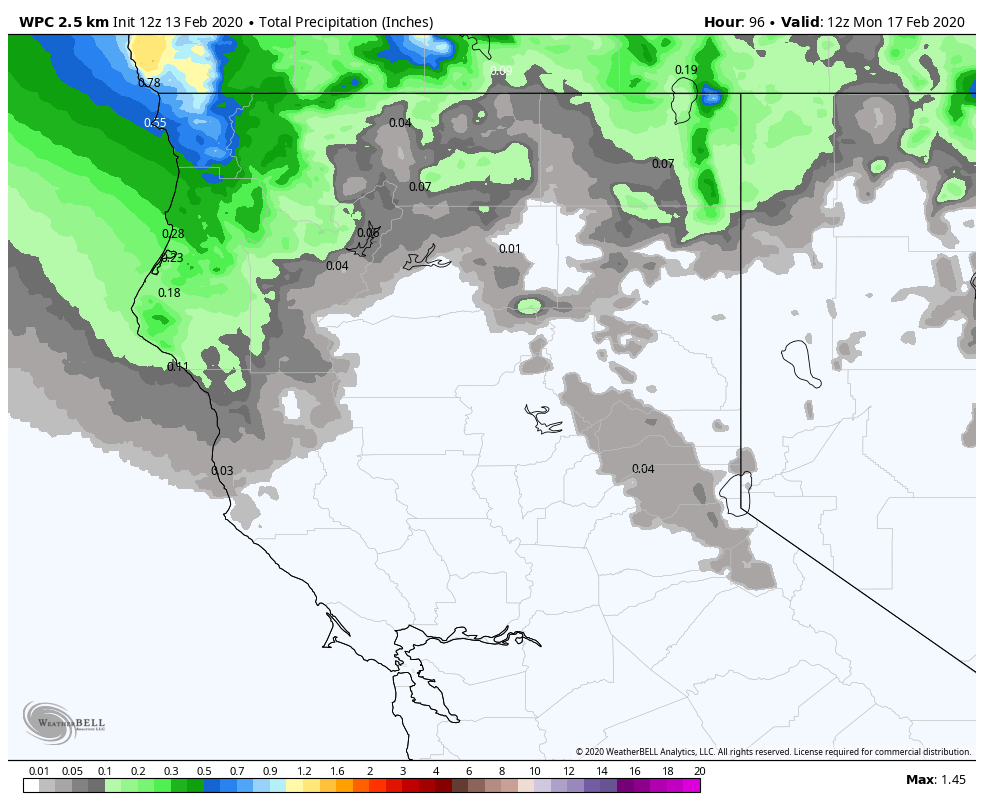 This cold front is not as cold as the ones the last 2 Sundays. Highs only dropping into the 30s on the upper mountains and 40s at lake level.

Behind the front, we should see a cool northeast flow but with lighter winds into Monday. Highs remaining in the 30s on the upper mountains to 40s at lake level possibly through Wednesday.

Most model runs show high-pressure building back in along the coast with dry weather through the week and into the week of the 22nd. It would also mean a slight warming trend later in the week as well with highs into the 40s & 50s. 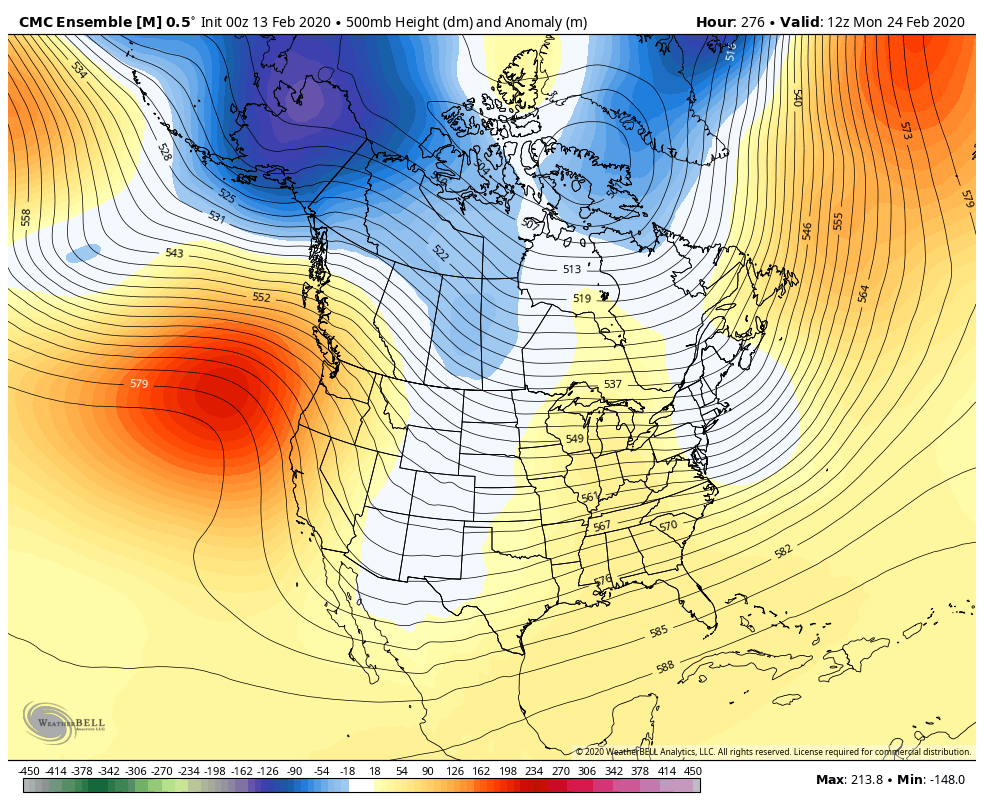 The GFS model is kind of doing its own thing this morning in suggesting the next trough for Tuesday - Wednesday that drops down to the east creates a cut-off low that wanders into southern CA and then east into southern NV. 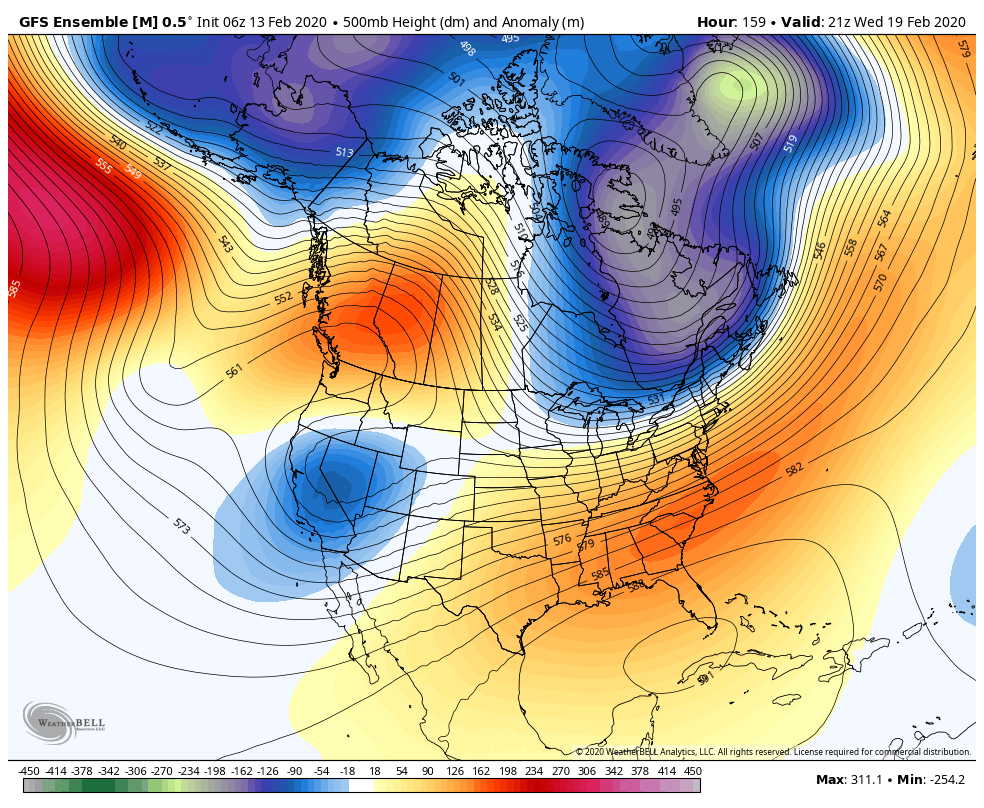 We will have to watch over the next few days to see if that has any merit. That would keep temperatures cooler with an east wind and more clouds. Possibly some showers but the current track would keep most precipitation in southern CA.

The GFS model continues to do its own thing into the weekend of the 22nd with another cut-off low off the coast that wanders into southern CA. 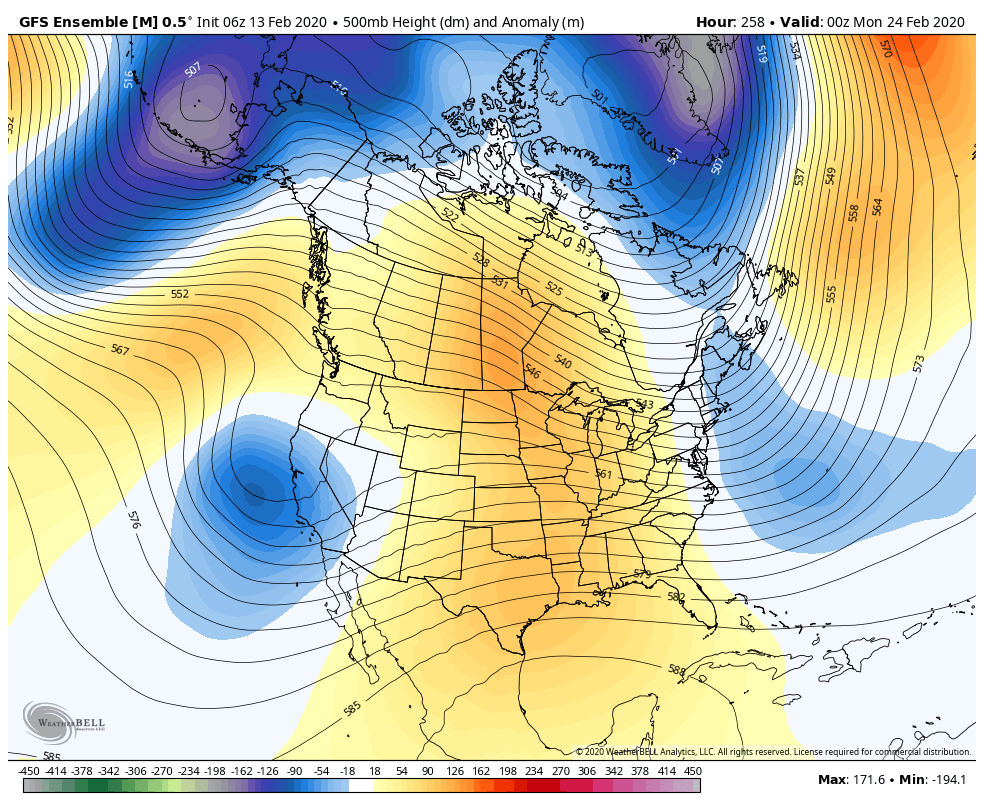 The latest GFS model run continues to show these weak cut-off lows wandering down the coast through the end of the month. Most of the other models keep high-pressure near the coast with a drier and milder pattern. Even with the cut-off lows most of the moisture on the GFS is into southern CA and not the northern Sierra. So both solutions keep us fairly dry and well below average for precipitation into the last week of February.

Here is a look at the Canadian ensemble mean model for total precipitation over the next 2 weeks. Most of the meager amounts of precipitation are from some ensemble runs that suggest we could see a couple of week systems from the weekend of the 22nd into the week of the 24th like the GFS is showing. 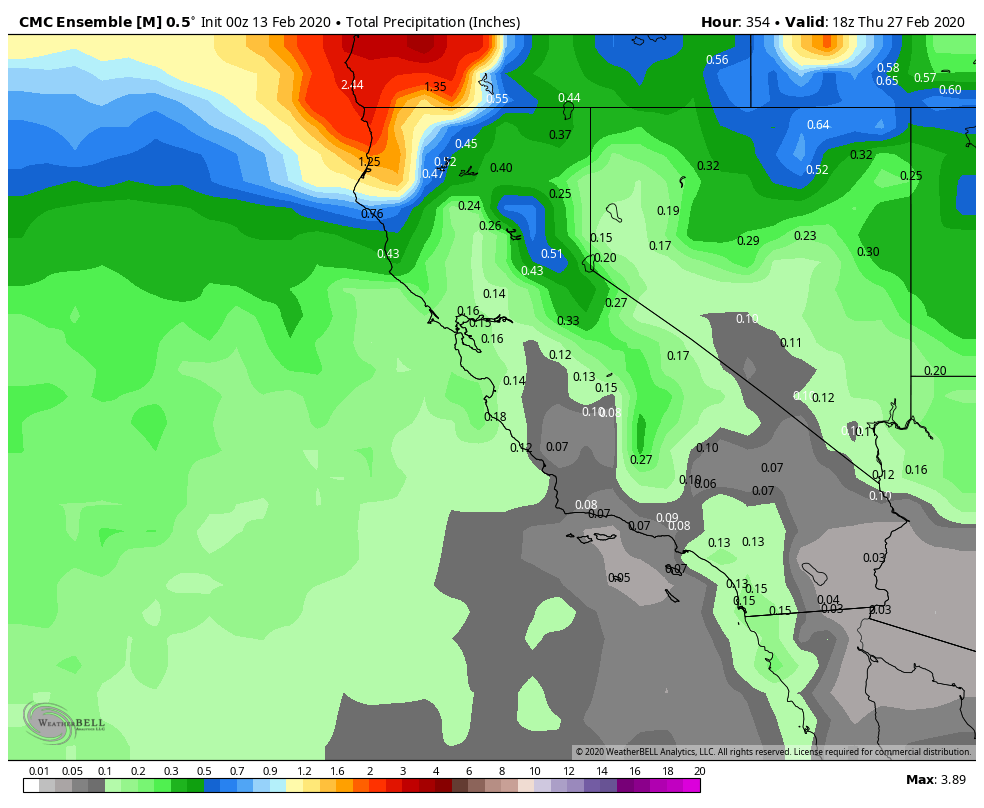 If you are new to the blog we use this section for long-range speculation, especially during dry periods. It's not a forecast as we believe the long-range models lose most of their accuracy beyond 10 days. We just look at potential patterns based on teleconnection forecasts and long-range models. It's more for fun or desperation than a realistic forecast you could put money on, hence the word "fantasy".

The long-range models aren't showing any significant storms into the last week of February. The ensemble runs are continuing to show lower heights into CA under the ridge at the very end of the month into the first week of March. 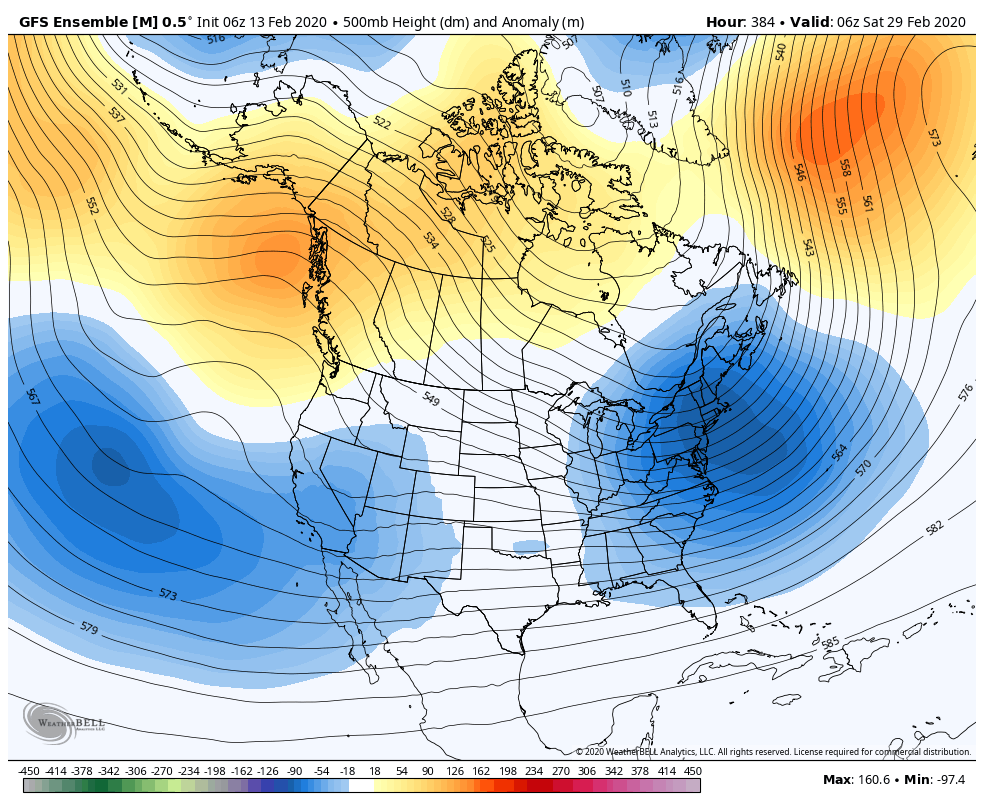 The first week of March is where we have had our hopes set. Someone commented yesterday that the models have teased us with an undercutting pattern since December. This is the first time I remember the models showing this all season. The long-range discussions since December have mainly been about a ridge in the northeast Pacific with only a chance for shots of cold and light snow as weak systems move down from the north, and that is what we have seen up until now. That is also the pattern we expected to see much of this winter as discussed in October in our winter outlook.

The GFS model is the most bullish with the undercutting but is also the most bullish with the MJO moving from the western Pacific through the eastern Pacific over the next 3 weeks. The European model is much weaker and the CFS model is in the middle. Here is a look a the CFSv2 model for precipitation anomalies through the last week of February showing below-average precipitation for CA. 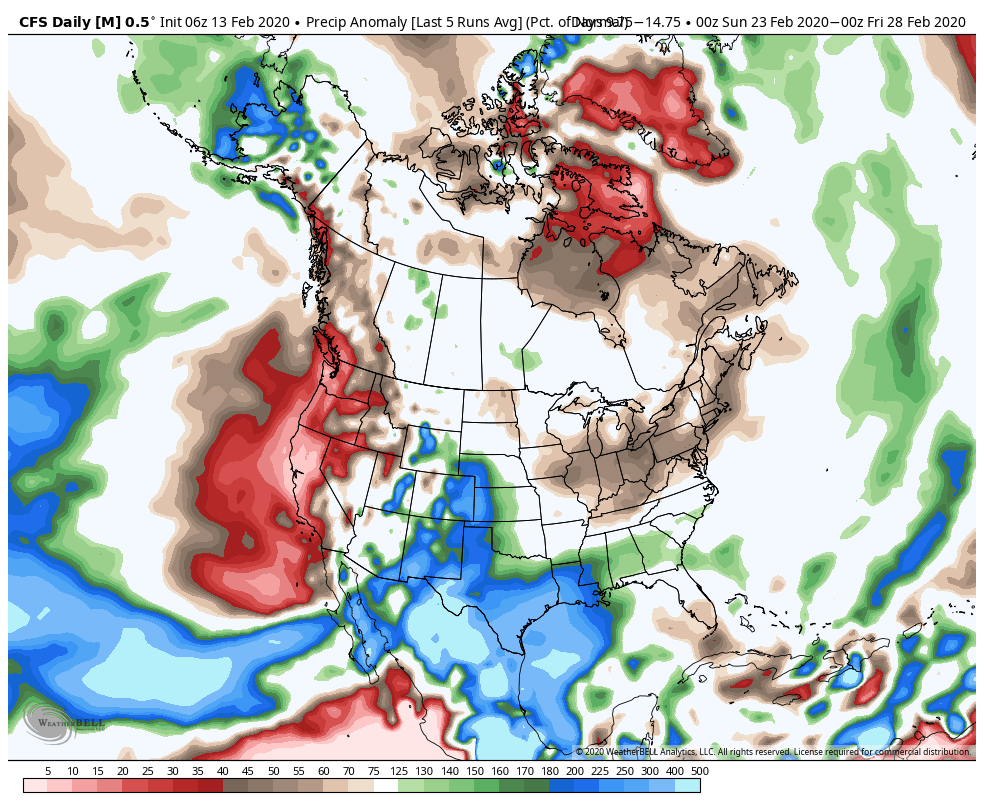 And here is the CFSv2 for the first week of March showing above-average precipitation for CA. 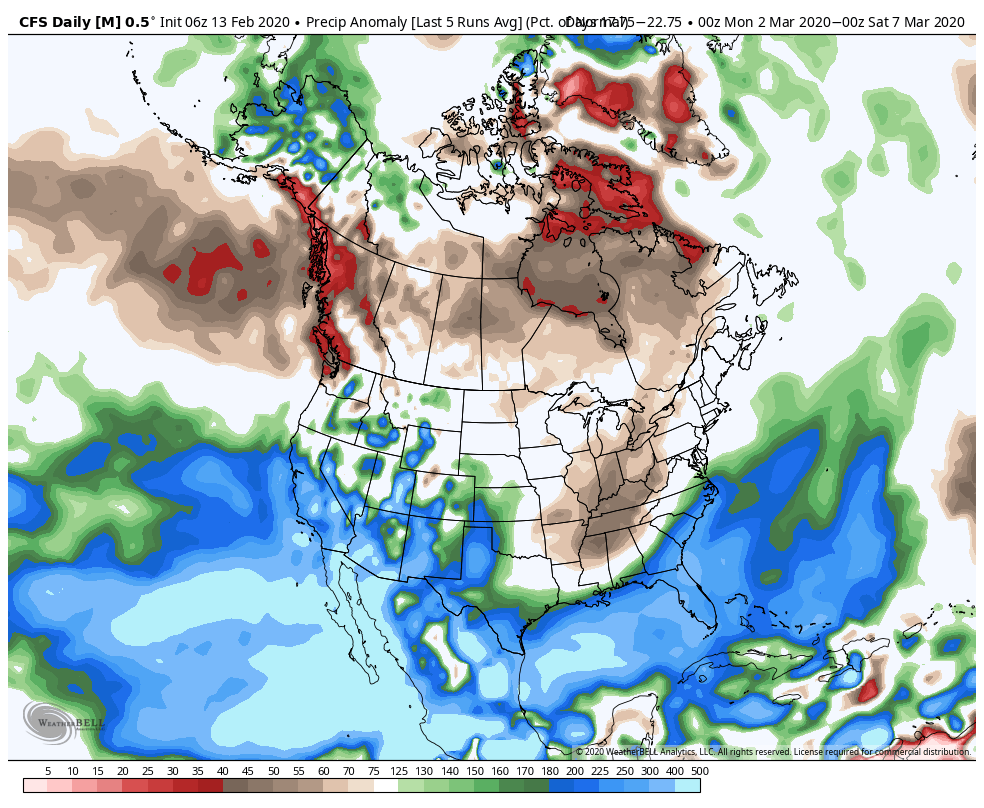 It also keeps us above average through March, and also for April and May. A wet spring ahead? But this is well beyond fantasy range into "you're crazy if you believe it" range. All we can do for now over the next 2 weeks is sit and wait to see if March will bring a change in the pattern and if we could see any systems of interest pop-up through the end of February...

Here is a look at the snowfall reported by the ski areas so far this season. February sticks out like a sore thumb but we are only halfway through the month. But with now snow in the forecast still expecting February to easily be the lowest snowfall month so far this season. 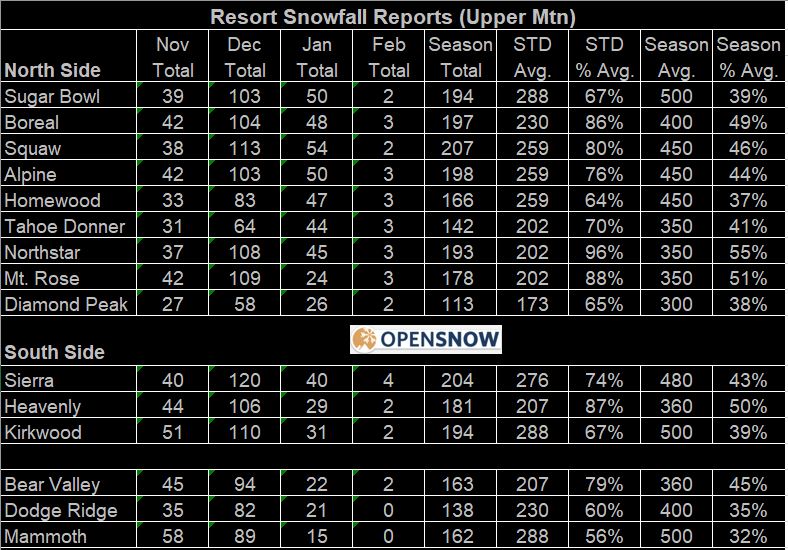 If the ski season is from mid-November until the 3rd week of April that is 23 weeks. We are about 12.5 weeks into the season or 54% of the way through. Based on that assumption, here are the current snowfall and precipitation stats. 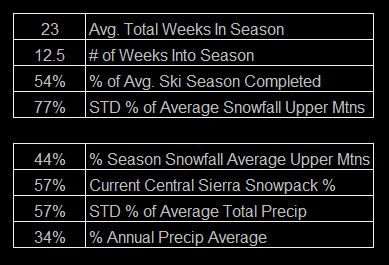 We were holding close to the average for snowfall on the upper mountains through the storm right before MLK weekend and then have been falling like a rock since. The snowpack is even lower. It doesn't measure the snowfall or snow depth, it measures the water content in the snowpack compared to the average for the date. We had mostly colder storms earlier this season with higher snow ratios and less water contents in the snow. 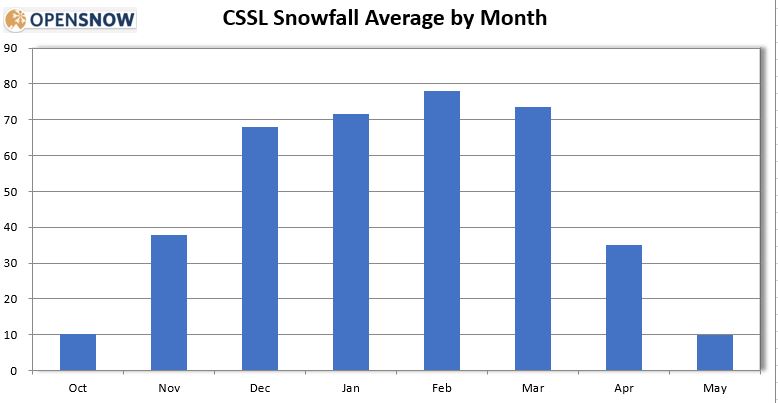 So we still have one of the biggest snowfall months of the season ahead of us. In the Sierra you definitely can't write-off winter until you get through March. 2 years ago we were at the 3rd lowest snowfall season in February and skyrocketed out of the bottom 10 in March with over 200 inches of snow for some ski areas. We can also get some big storms in the beginning of April before the jet stream peters out... Keep the faith, it's on February 13th.