- Expecting clouds & sun into Saturday as a system moves through to the north & the next system approaches. Highs in the 40s on the mountains and 50s at lake level. Lighter winds expected through Saturday and then increasing Saturday night. We could start to see gusts to 30+ mph over the ridges Saturday afternoon. - A weak system on Sunday brings clouds, gusty winds, colder temperatures, and possibly a few snow showers. Highs dropping into the 30s on the mountains and 40s at lake level. Maybe a dusting of snow on the mountains at best. Ridgetop winds gusting to 70+ mph from the southwest possibly affecting some upper mountain lifts. - We start next week back in a dry and cool pattern with sunny skies and highs in the 30s through Wednesday. A cool northeast wind gusting 30-40 mph on the mountain tops through Tuesday. Then warming back into the 40s later in the week. We should see mostly sunny skies throughout the week with no precipitation expected. - Next weekend we could see similar weather as this weekend. Sunny & Mild Saturday with a cold front Sunday that could bring colder air, gusty winds, and a chance for snow showers. - The long-range models suggest we could see a more active pattern start to set up right near the end of the month into the first week of March.

It's a good day to spend outside with your Valentine. We have sunny skies this morning, light winds, and highs warming into the 40s on the upper mountains and 50s at lake level. We could see some clouds move through today from a system moving through to our north. 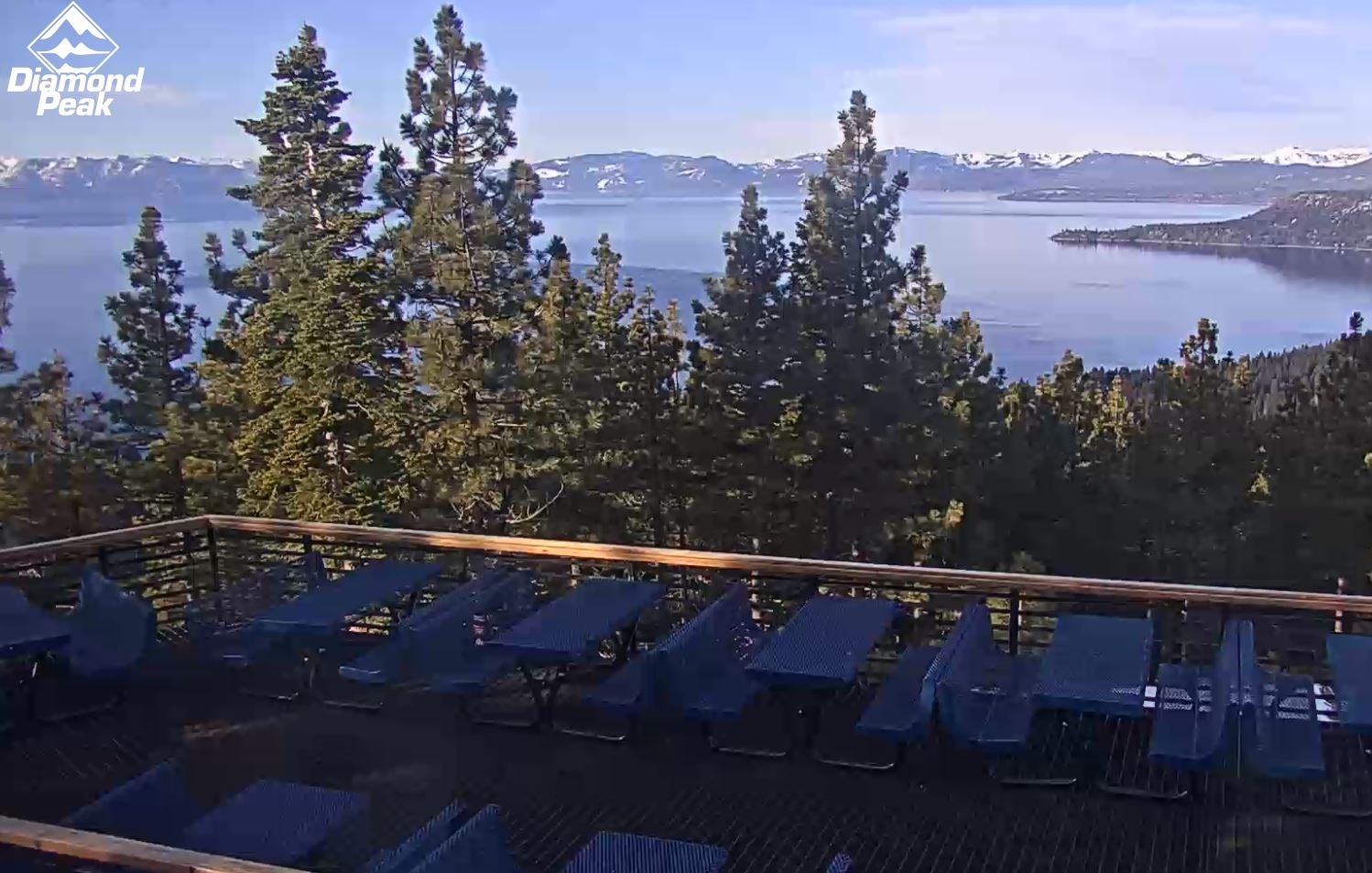 Expecting similar weather for Saturday with ridgetop winds increasing slightly by afternoon, gusting from the southwest at 30-40 mph.

Another Sunday with a pointless cold front that will bring us clouds, gusty winds, colder temperatures, and a chance for snow showers with no accumulations. We should see clouds and some sun through the day with the chance for scattered snow showers. The latest model runs continue to show enough precipitation for a dusting of snow at best on the mountains if any. 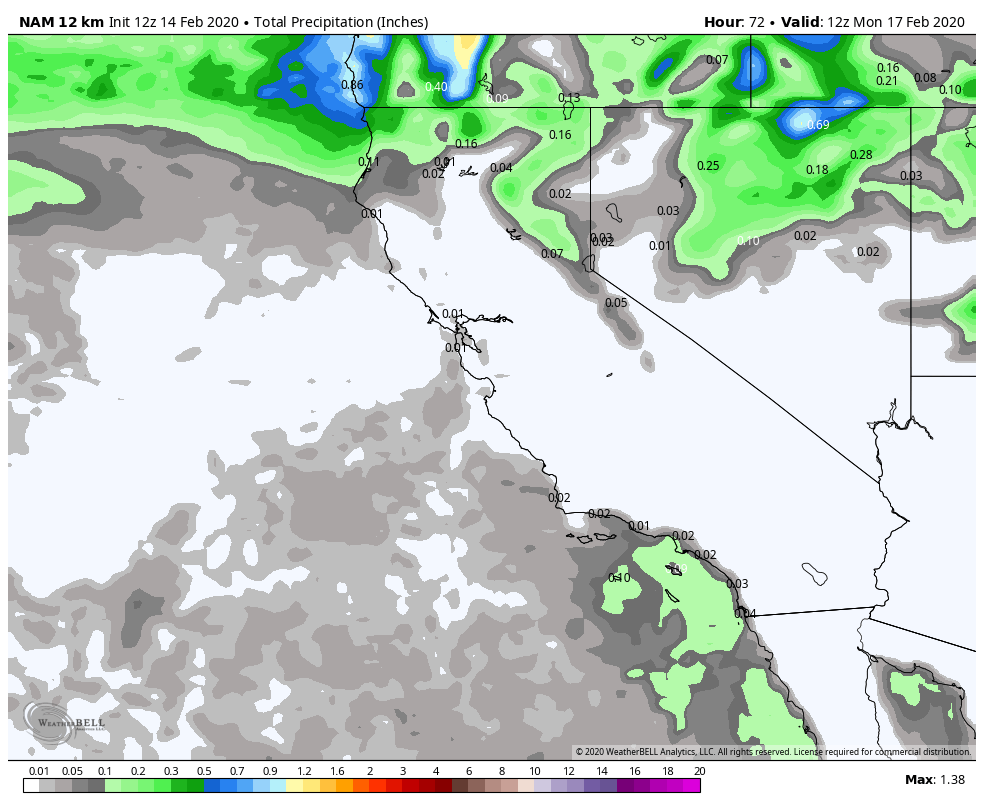 Ridgetop winds gusting to 70+ mph through the day which could close some upper mountain lifts at wind-exposed mountains.

Cool Start to Next Week:

Winds shift northeast for Monday but nowhere near as strong as last Monday. We could see ridgetop winds gusting 30-40 mph through Tuesday making it feel a bit colder on the mountains. Highs in the 30s through Wednesday as the winds die down. Expecting mostly sunny skies throughout the period. 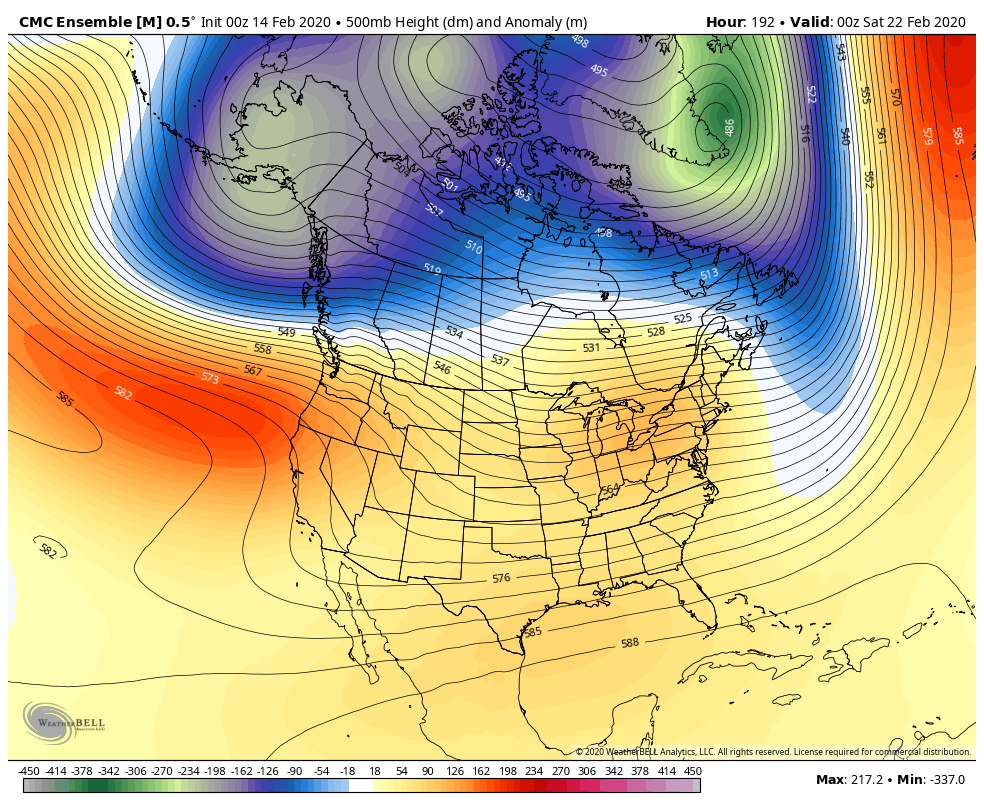 Here is a look at the 1-week forecast for total precipitation on the GFS ensemble mean model showing only the light precip from this Sunday. 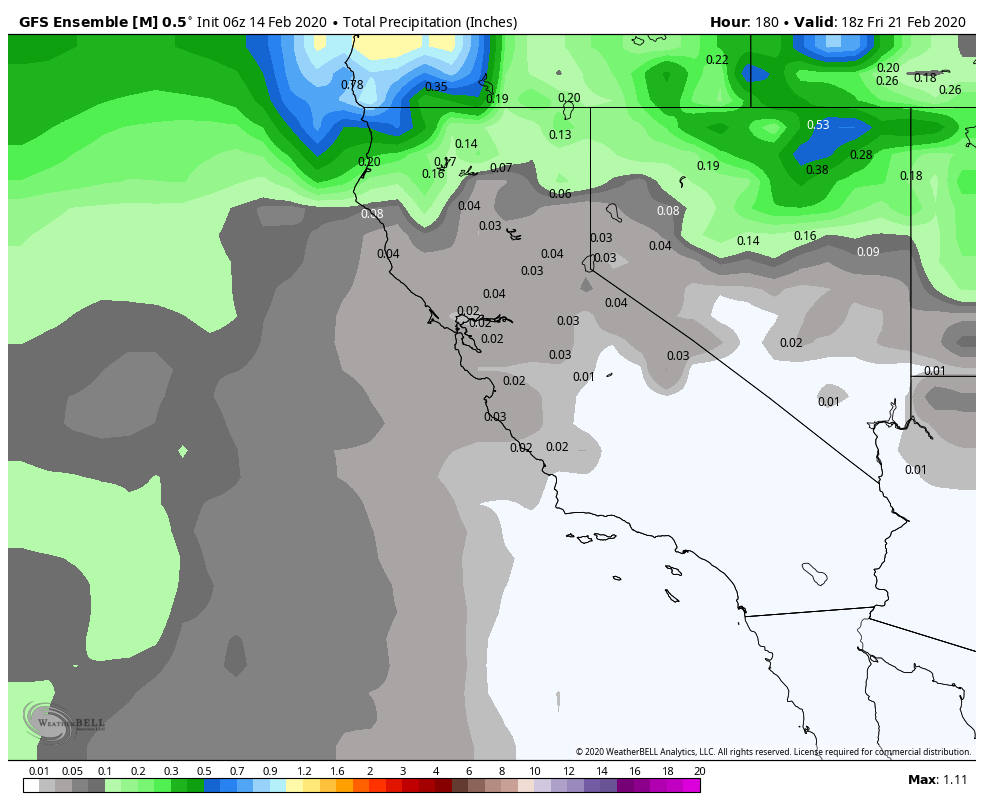 Believe it or not, the latest model runs continue to be in decent agreement on another cold trough dropping down from the north next Sunday. What is it with Sundays recently? 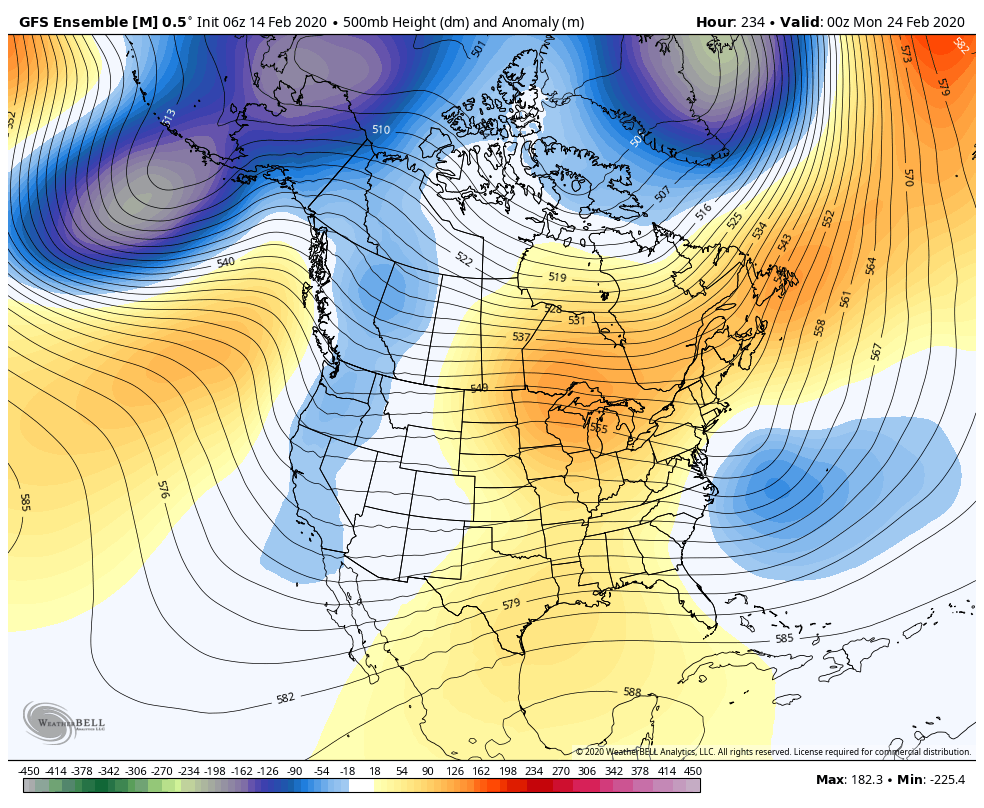 Most model runs show another brush-by system with a dusting of snow. But some model runs show a splitting system diving farther south into Southern CA and some show a wetter system digging into CA. So we will be keeping an eye on this potential system throughout the week.

We are expecting well below-average precipitation to continue through the end of the month. 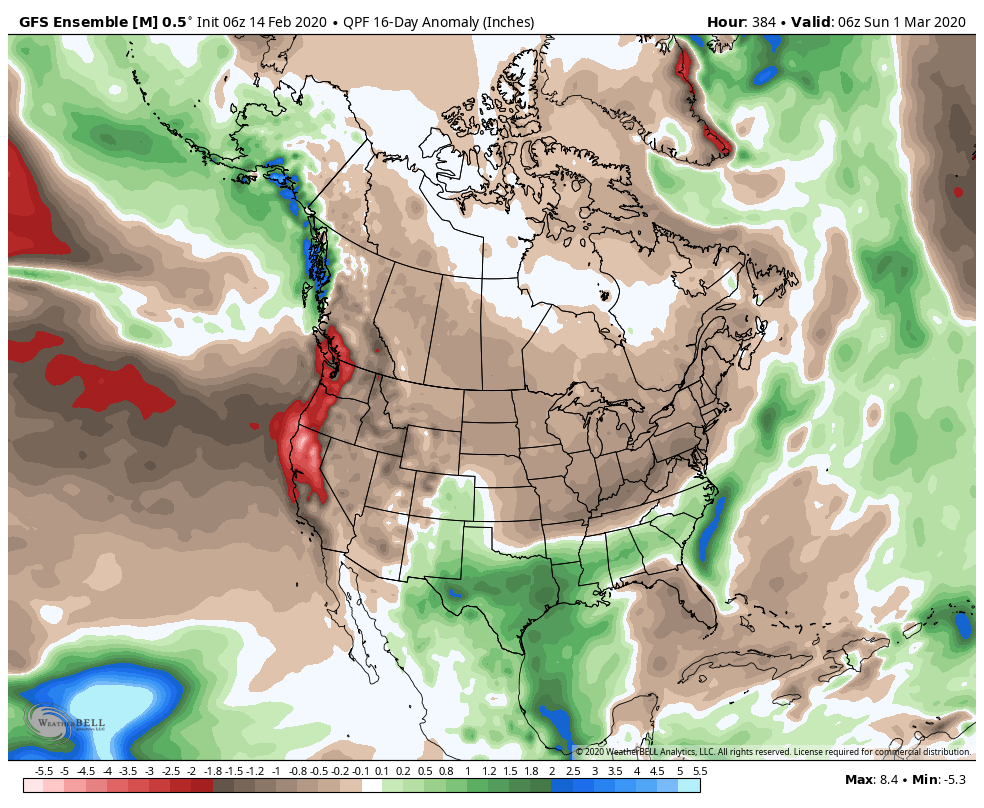 But that doesn't mean we get out of the month completely dry. We have the system next Sunday to watch, and then the GFS model and some of the ensemble runs of all the models suggest that we could start to see weak systems the week of the 24th. Here is a look at the 2-week total precipitation forecast on the GFS ensemble mean model. It's meager amounts of precip, but not totally dry through the end of the month. 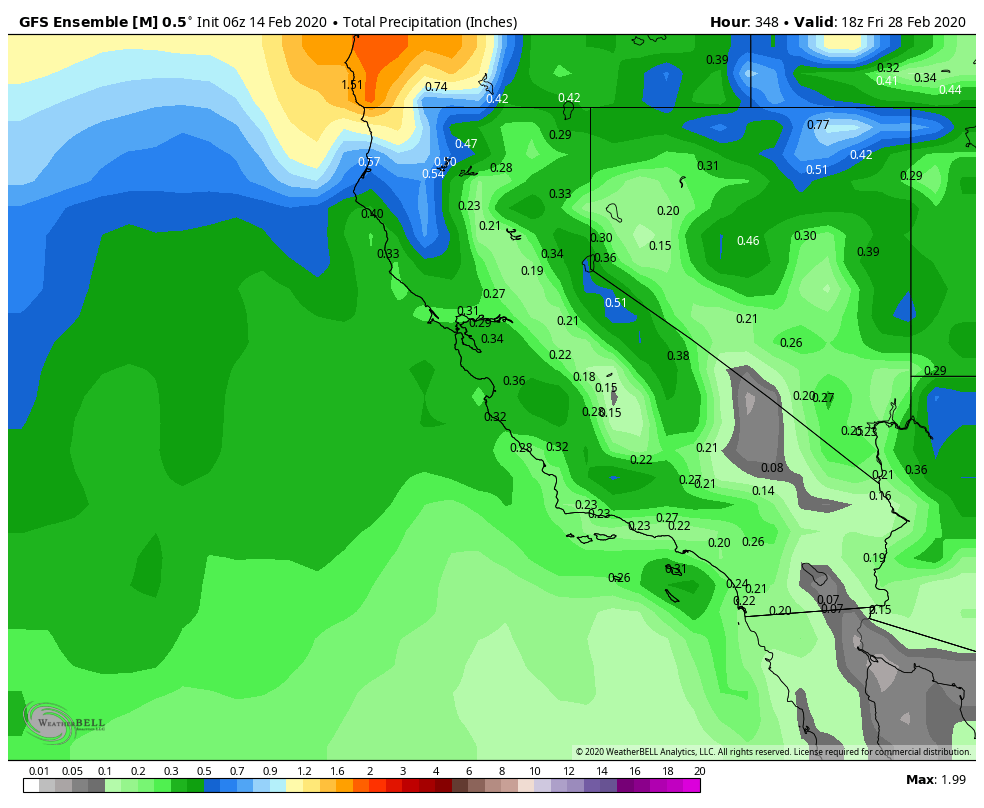 We need real storms though. The pattern may just be starting to shift near the end of the month towards a pattern that could bring a more active storm track into CA going into March. We have been watching the first week of March for hope. The European weeklies yesterday (they run Sunday & Thursday) showed a similar pattern as the last run on Sunday, with the ridge shifting out to the south of the Aleutians the first week of March and trough over the West Coast. Then staying in that pattern through most of the month.

The GFS ensembles show a similar pattern starting to develop by March 1st... 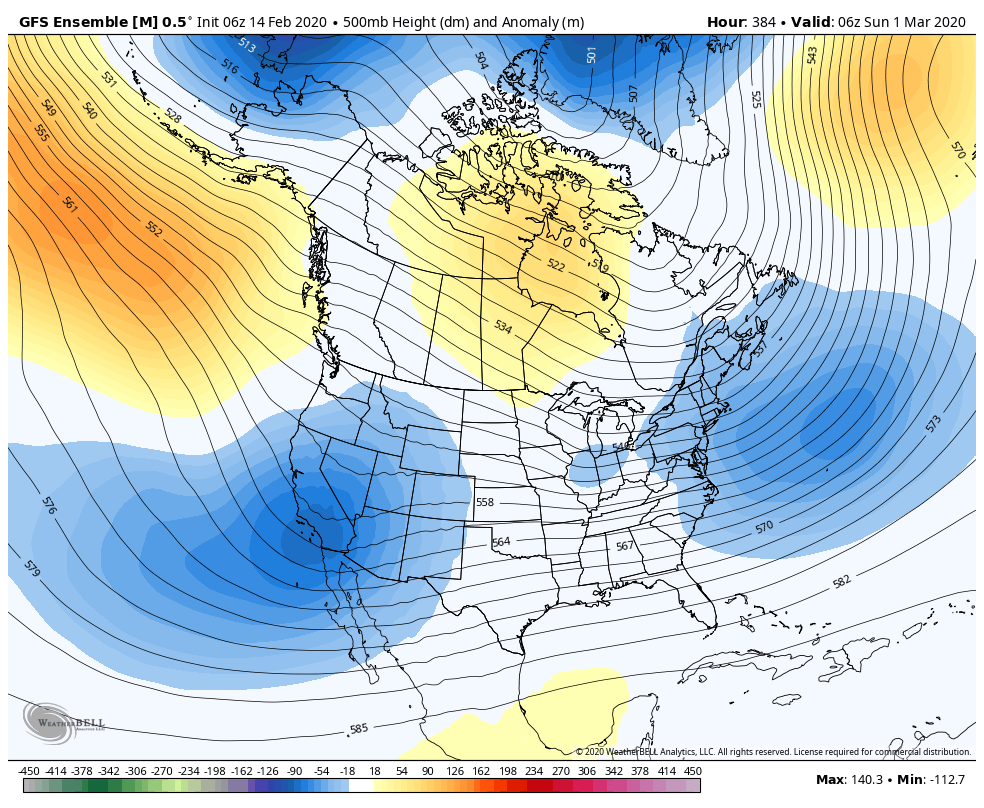 ...and so do the Canadian ensembles. 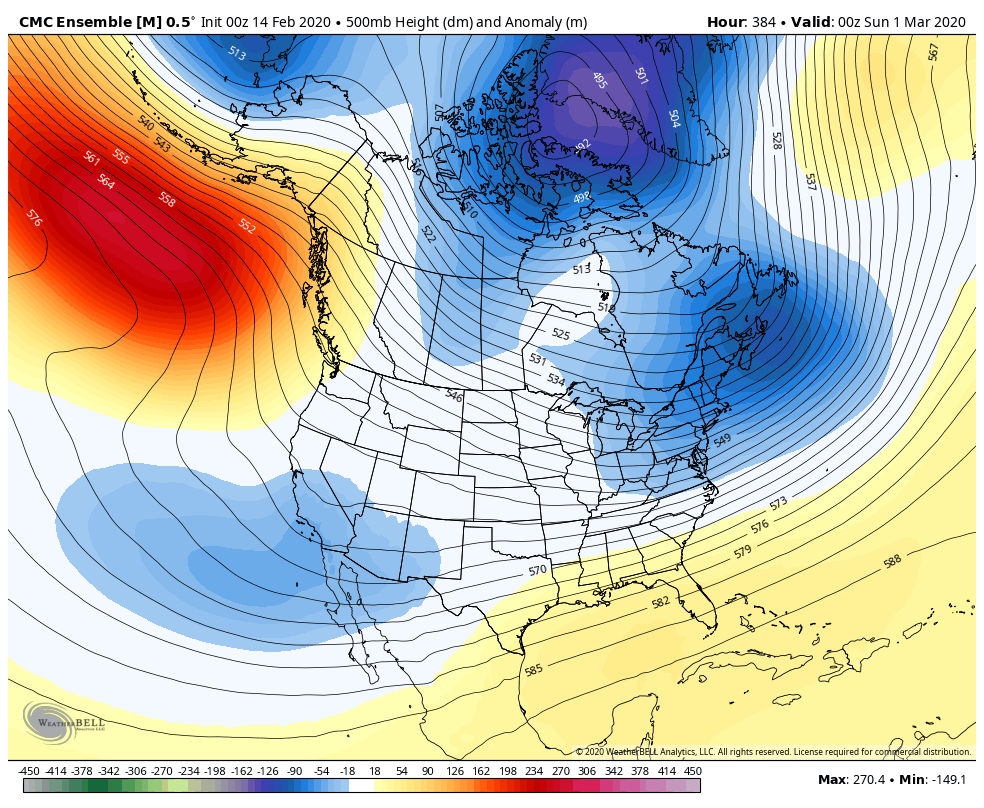 At first, they suggest maybe just an early start to cut-off low season & possibly undercutting of the ridge into CA. Then the ridge shifting farther NW with storms possibly dropping into the West Coast from the northwest. Of course, this is more than 2 weeks away so still no confidence this far out. But a good sign that all the models are pointing in the same direction going into March, so the first week of March continues to be our next hope for a return of real storms.

The other day I suggested we were playing a game of let's get the storms from week 4 to week 3, then to week 2 & week 1. We now have the above-average precipitation forecast on the CFSv2 model into week 3, and continuing into week 4. 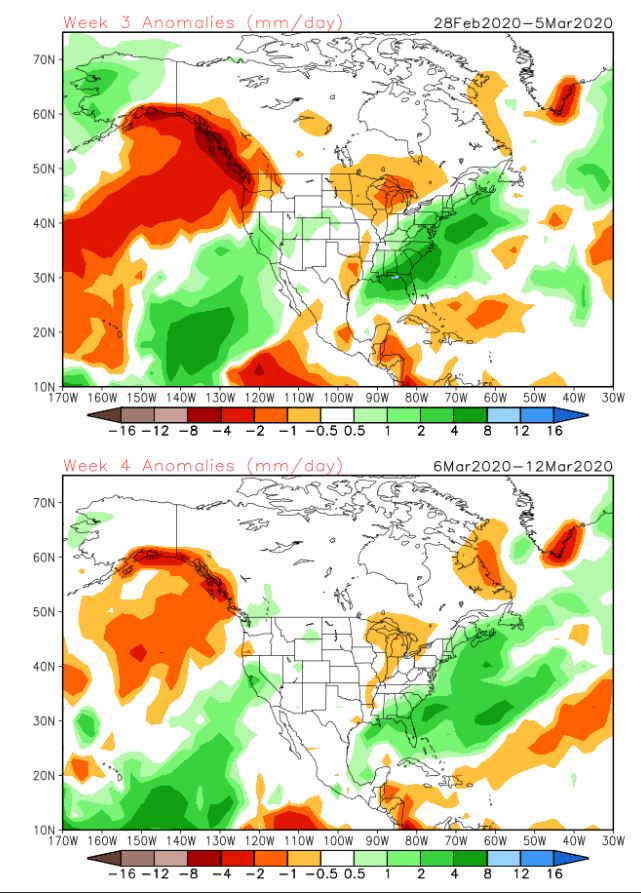 Now we have to try and get it into week 2 by this time next week, and week 1 by the week after. It's always torture seeing a possible pattern change more than 2 weeks out during a dry spell and staring at it for weeks hoping it holds until the near term. But it's all we can do for now...