A Message From Our CEO:

To fight the spread of the COVID-19 virus, California ski areas are closed. Some mountains, including Vail Resorts, announced that this closure will continue through the end of the season. This is really important and should help the situation work out much better than a worst-case scenario. Here is the announcement from Vail Resorts: https://www.snow.com/info/Vail-Resorts-COVID-19-Resort-Closing-Update

For chasing powder, we have received requests from first responders and community leaders to communicate that they do not want people coming from out of town and definitely don’t want to deal with potential snow-related injuries when their focus should be on COVID-19. The Town of Truckee has asked that people Not visit Truckee right now: https://www.facebook.com/VisitTruckee/. Locals, please be extra responsible and cautious when enjoying the outdoors so that you’re safe and do not cause a burden to healthcare workers.

For the individual mountain Daily Snows that we usually write for Squaw & Mammoth, we are going to stop writing those based on requests from some communities that do not want to draw attention and crowds based on writing about incoming storms. We will continue to write both the Tahoe Daily Snow & I-80 Daily Snow. For other forecast locations outside of the ski areas, please check our other service OpenSummit.com and on our iPhone/Android apps.

For our snow-loving community and local mountain communities, we will get through this. In the meantime, please help and support those around you in need. Support employees & local businesses that are going to suffer from this if you aren't being affected yourself and can help.

The Storm So Far:

You have probably noticed that I am not getting up at 4 a.m. anymore with the ski areas closed. My posts are getting out around mid-morning instead of early morning.

It looks like this storm has been performing like we expected so far. We saw the cold front move through overnight. That brought a band of steadier snow across the Tahoe basin with several inches of snow piling up on the mountains & at lake level. Here is a shot a reader sent me from their house near 267 over Brockway (near Northstar). 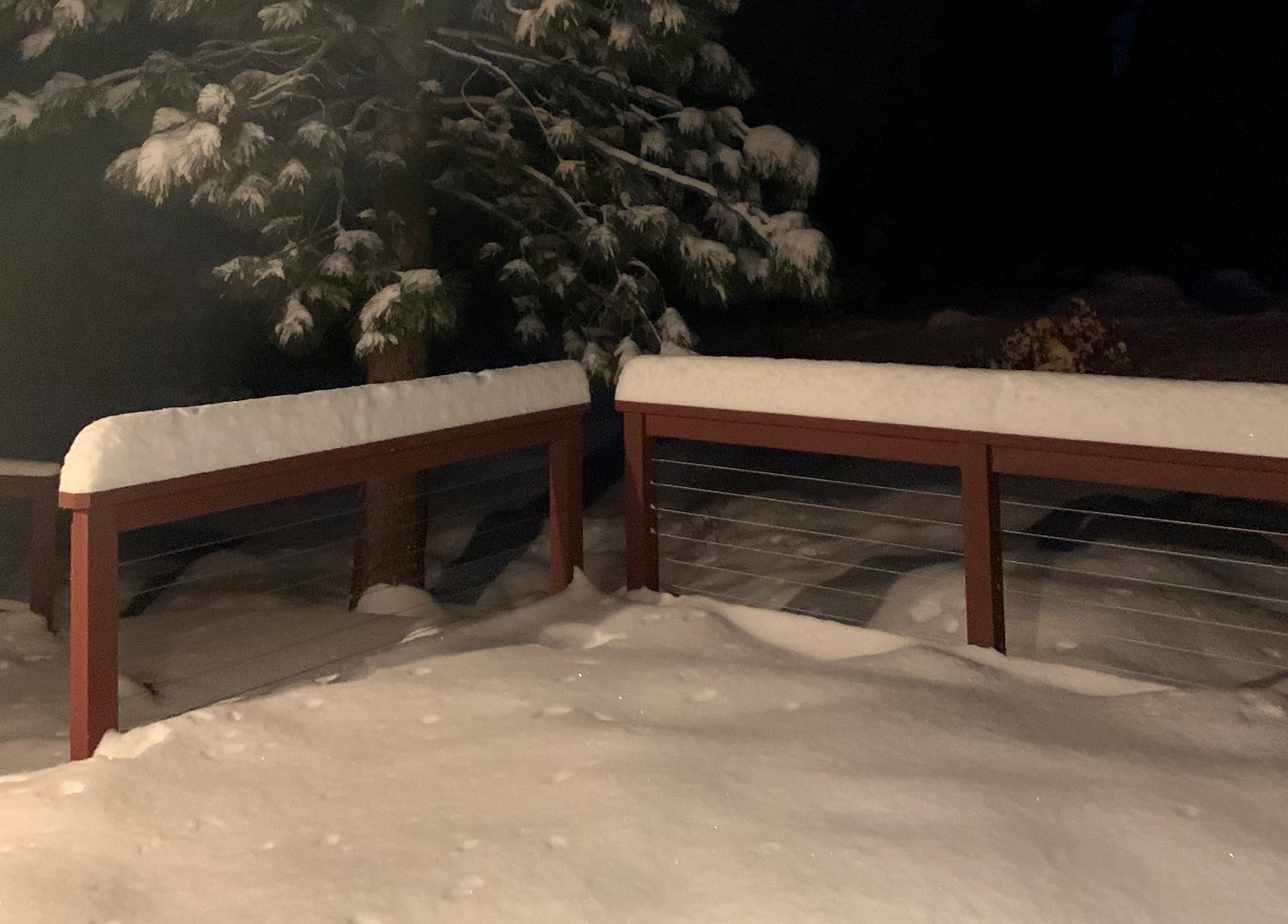 That looks like at least 8 inches on the railing to me. Here is a look at the heavier bands of snow that moved through overnight with the front. 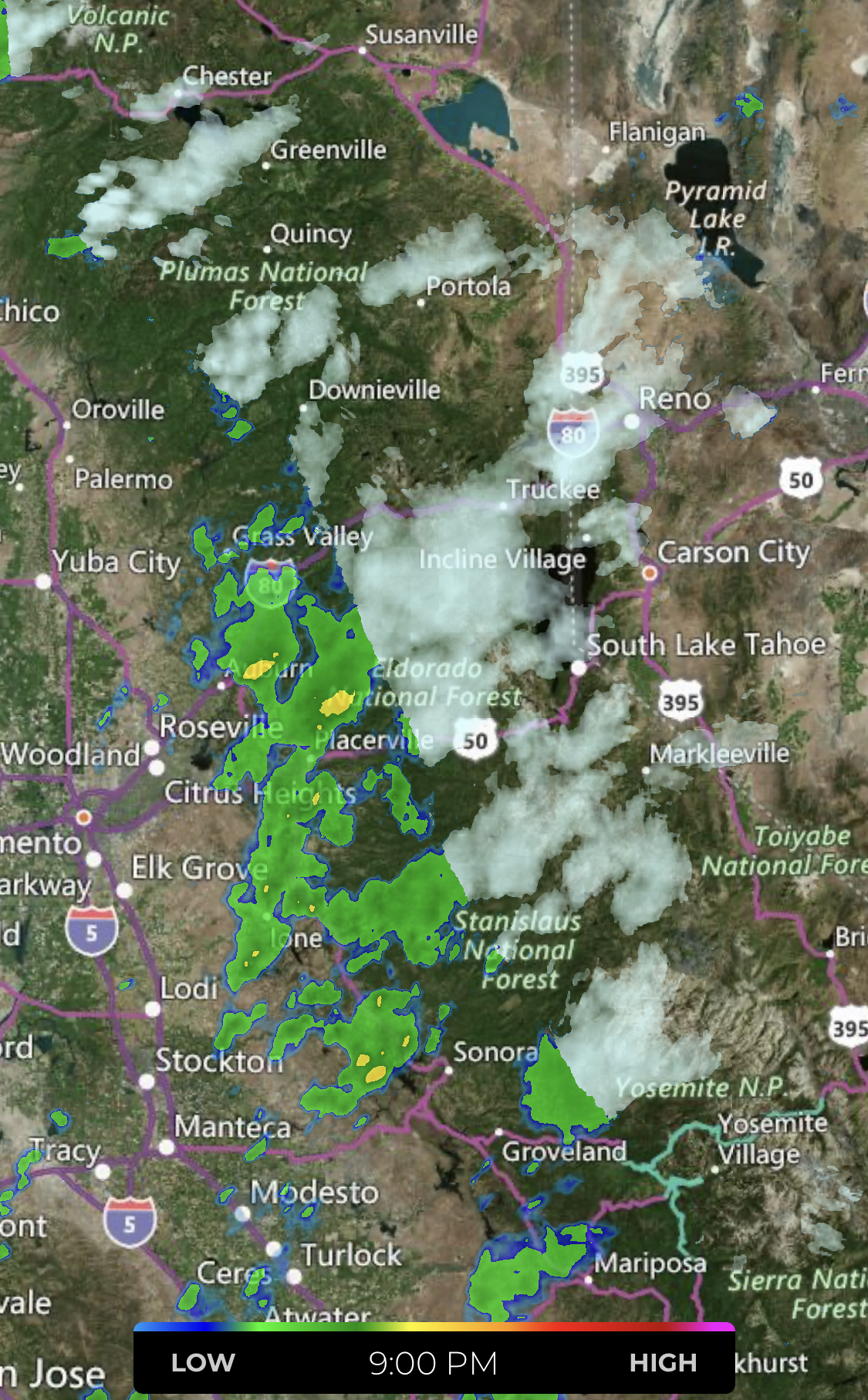 Behind the cold front this morning it is much colder with temperatures dropping into the teens on the mountains & 20s at lake level. 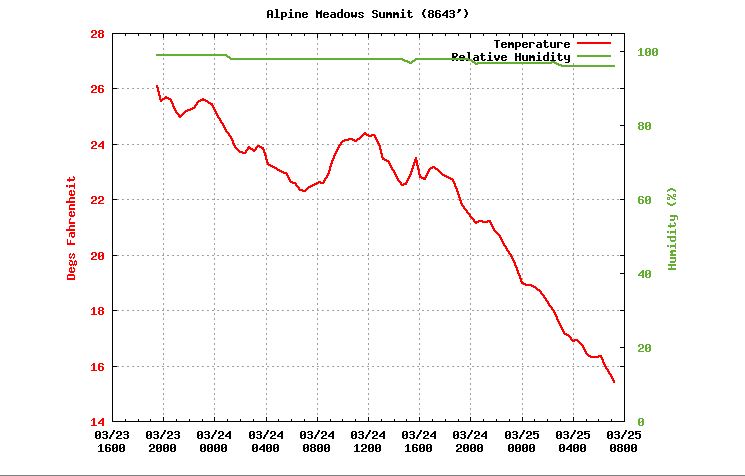 The winds have backed off only gusting up to 30+ mph this morning over the ridges, still from the southwest. We do have chain controls through the mountains. Mostly trucks on the road with most people working at home which is good, but the storms over the past week have been slowing down the truckers trying to get supplies to the stores. I think there is a toilet paper delivery somewhere in this photo this morning. 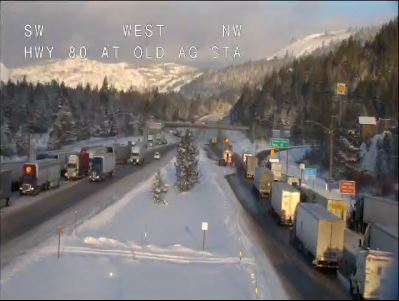 I was asked to not post photos of the untracked powder on the mountains as to not tease people or entice them to drive up to the mountains to ski it. So I've been trying to limit the photos to just lake level and non-ski area photos. I am still trying to track the snowfall for historical purposes though & to verify my forecasts.

I have been using the snotel data nearest each mountain for total precip every 24 hours and multiplying by the assumed snow ratios to try and get an estimate of snowfall for each. I also use reader reports from nearby to make sure my numbers make sense. The numbers in green I have verified with the ski area.

We were expecting 1-6 inches at lake level and 6-12 inches on the mountains for the past 24 hours. From the data I've gathered, it looks like that is exactly what we picked up. We have storm totals of 7-15 inches so far. 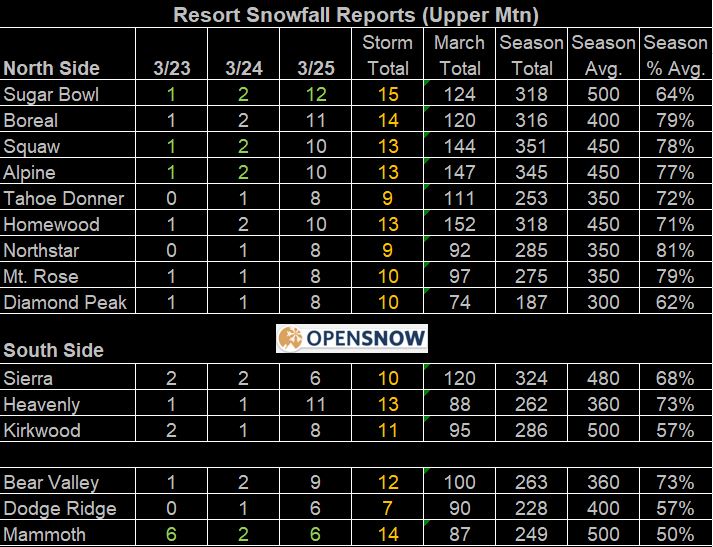 The steady snow moved through to the south early this morning. We have some clearing skies over the lake this morning. 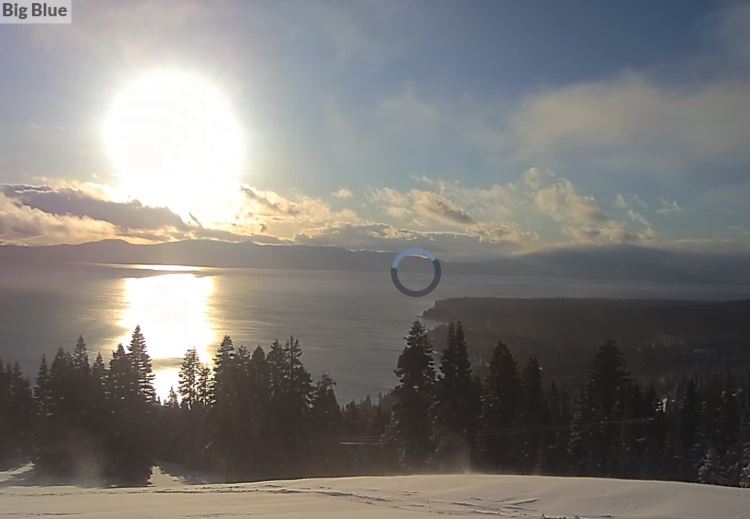 There are still some snow showers firing up on the west slope and along the crest.

The center fo the low-pressure system moved inland and is tracking south over the area today into Thursday. That keeps the atmosphere unstable with snow showers possibly becoming more numerous during the afternoon with heating during the day causing more rising air and convection. The snow showers may die out again Wednesday night into Thursday morning and then become more numerous again Thursday afternoon.

The latest model runs show a range of 1-4 tenths of an inch of total additional precipitation along the crest through Thursday afternoon. That's kind of a big range with some models showing some heavier showers for Thursday afternoon than others. The 100 model average is around 2.5 tenths. Here is a look at the WPC model's forecast for Wed-Thu. 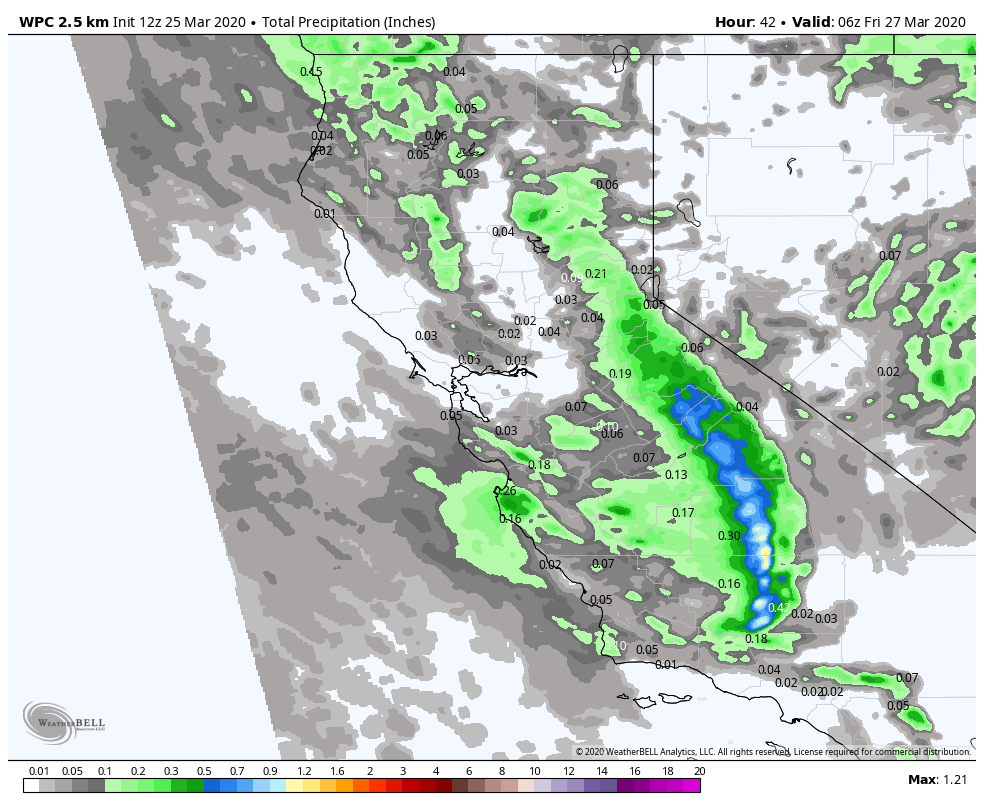 I'd expect clouds & sun both days with afternoon snow showers over the mountains, especially along the crest. It will feel warmer in the sun and much colder under clouds. Highs in the 20s on the mountains & 30s at lake level. Lighter winds expected into Thursday. Snow levels hovering around 4500-5000 ft. both days. Here is a look at the potential additional snowfall before this system completely clears the area Thursday night. 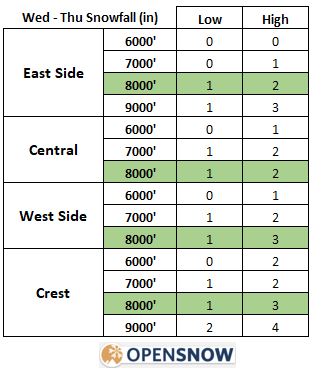 Friday looks like a quick break between storms with mostly sunny skies. Highs into the 30s on the mountains and 40s at lake level.

Most of the forecast models now agree that the weekend will be cooler and unsettled as a weak system moves through. We could see increasing clouds Saturday morning with scattered snow showers breaking out by the afternoon. This system could hang around through Sunday before clearing out Sunday night. 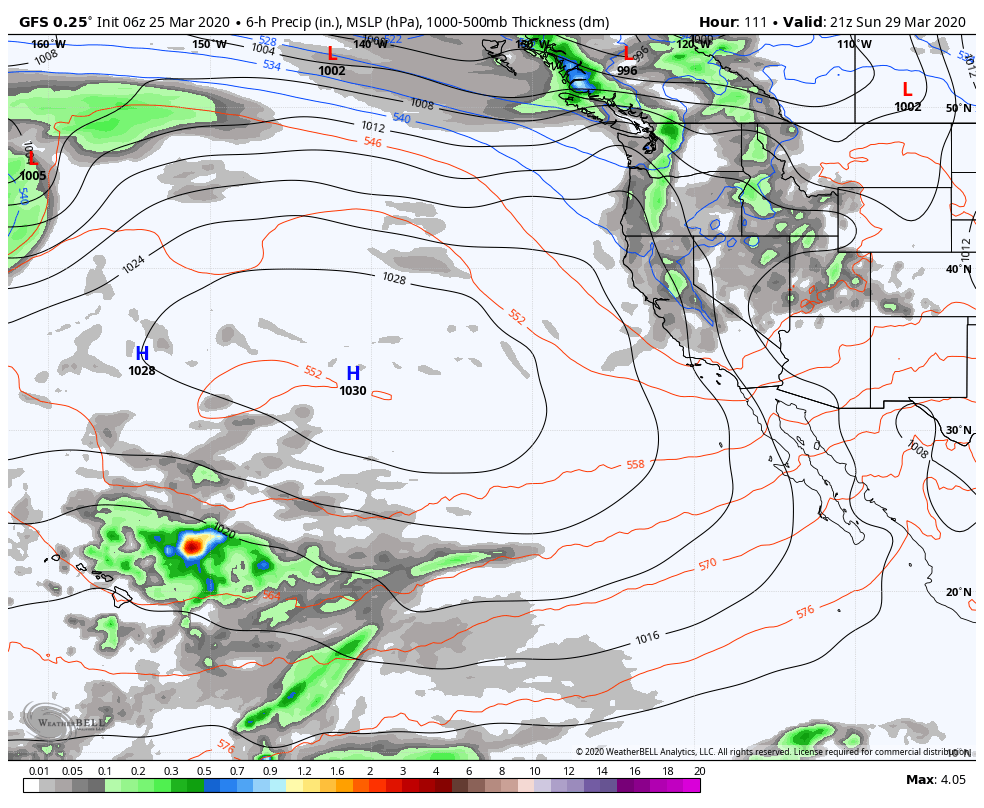 The winds look much weaker with this system. Highs cooling into the 30s for highs. Snow levels hovering around 5500-6000 ft. That means wet snow at lake level with the snow levels hovering just below. The snow will likely not stick to anything other than snow already on the ground. For the mountains, we could see similar amounts to the amounts forecast above, an additional 1-3 inches on the mountains. That is very little for a 24-36 hour system.

High pressure builds back in over CA starting Monday. We could warm up quickly into the 40s on the mountains & 50s at lake level next week, with mostly sunny skies expected. The models have trended back towards a weak ridge over CA through the week with the storm track staying to the north. 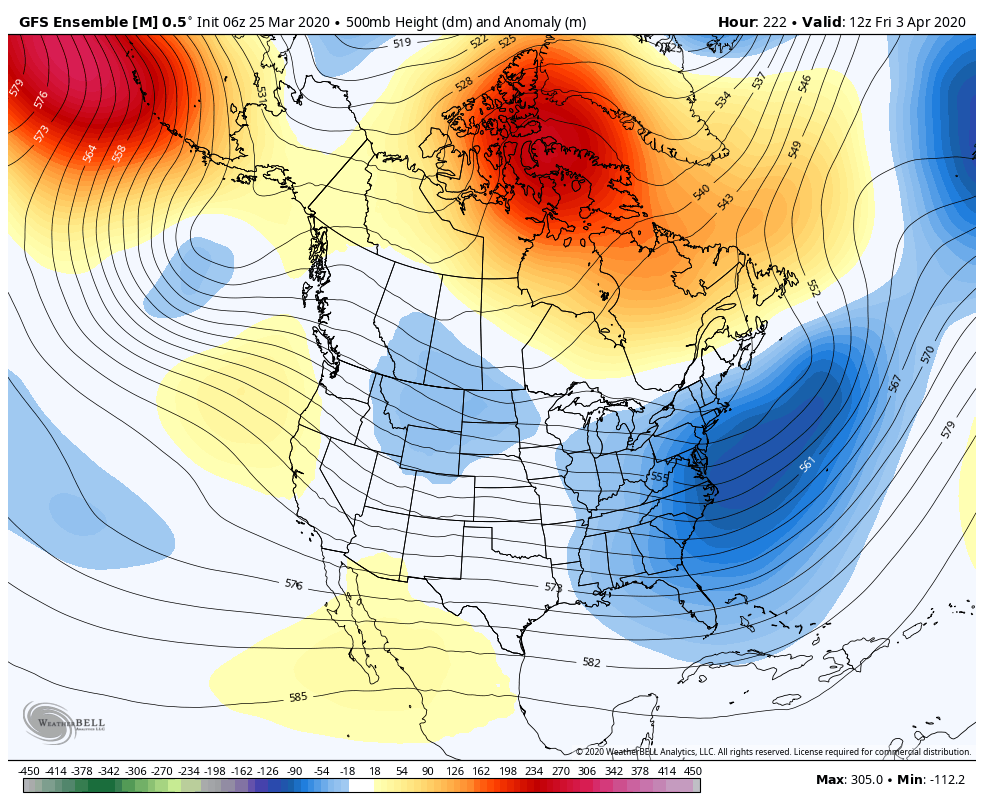 You can see that the PNA (Pacific North American) teleconnection is forecast to shift back towards the positive pattern. This teleconnection is closely tied to our pattern usually. You can see the dip in January when we saw a 2-foot storm, back to positive late January through February during the dry spell, and then dipping negative again in March with the active pattern we have been seeing.

The long-range models continue to suggest that we see a large trough in the eastern Pacific going through the 2nd week of April (the week of the 6th). It is just off the West Coast with a ridge over the West. 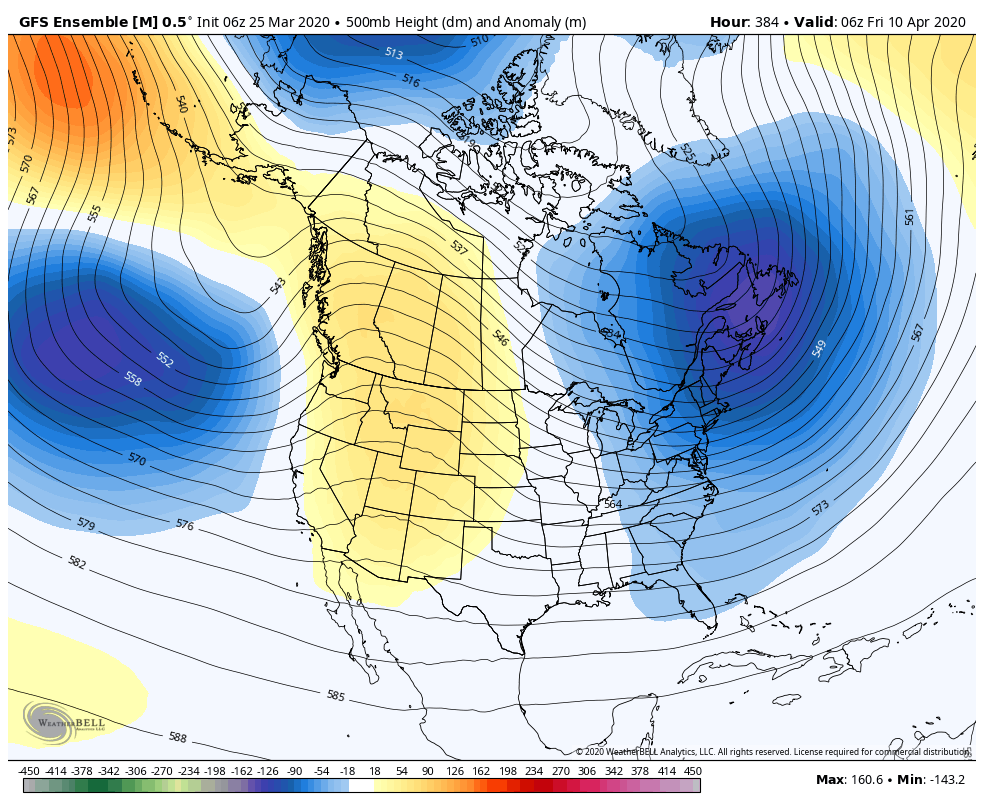 That puts us right in the middle of the two. Usually, a pattern like this sees storms try to push into the West Coast and weaken as they do. The slightest shift to the west or east with the pattern can mean a drier pattern or wetter pattern. Some of the long-range models and ensembles show a couple of wet systems pushing into CA that week, some show weak systems, & some show a drier pattern.

We will continue to watch to the pattern to see if we could see more storms the 2nd week of April and if we could possibly sneak in at least one more good helping of snow for the Sierra.