We are expecting a drier pattern through Tuesday with highs in the 40s. The next chance for light snow looks to be Wednesday, but that system may stay to our north. Cold overnight lows will allow for continued snowmaking. We may stay dry into Thanksgiving weekend. The next chance for a storm may be around the end of the month, but that is more than 10 days out.

The snow showers continued Wednesday but in narrower bands that hit some areas harder than others. We also saw snow levels rise up to around 7000 ft. The 2nd half of the storm Wednesday under-performed a bit which I mentioned was possible yesterday morning looking at the radar trends. The ski areas reporting so far today picked up an additional 4-7 inches on the upper mountains.

By the time the storm ended Wednesday evening around 1-2 feet of new snow had fallen on the upper mountains. I added a column for base amounts where a couple of inches up over a foot of snow fell, the higher amounts at mountains with higher base elevations.

That brings the totals for the month to around 2-3+ feet. Looking at the average November snowfall at the Snow Lab on Donner Summit the average is 38 inches for November. So we are likely close to average for the month now on the mountains after the last 3 storms. 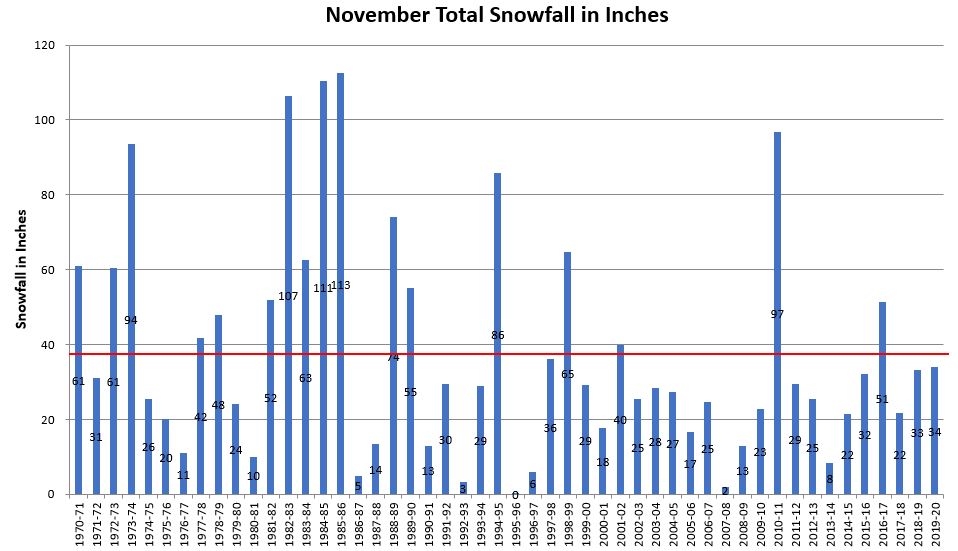 I'll put out my forecast scorecard tomorrow after I get the rest of the reports.

We are headed into more of a zonal pattern with high pressure over CA and the storm track west to east into the Pacific NW. We should see mostly sunny skies through at least Tuesday with lighter winds Friday - Sunday. Then a little gusty up high Monday as a system passes to our north.

High temperatures are expected to be in the 40s at lake level and 30s for the upper mountains. Overnight lows down in the teens and 20s. So snowmaking will continue at night, expanding on the natural base and previous snowmaking.

The next chance for a weak system is next Wednesday, but it looks like an outside chance right now. The GFS & Canadian models keep this system to our north as well, but the European model dips it just far enough south for some light snow showers. So we will keep an eye on that. 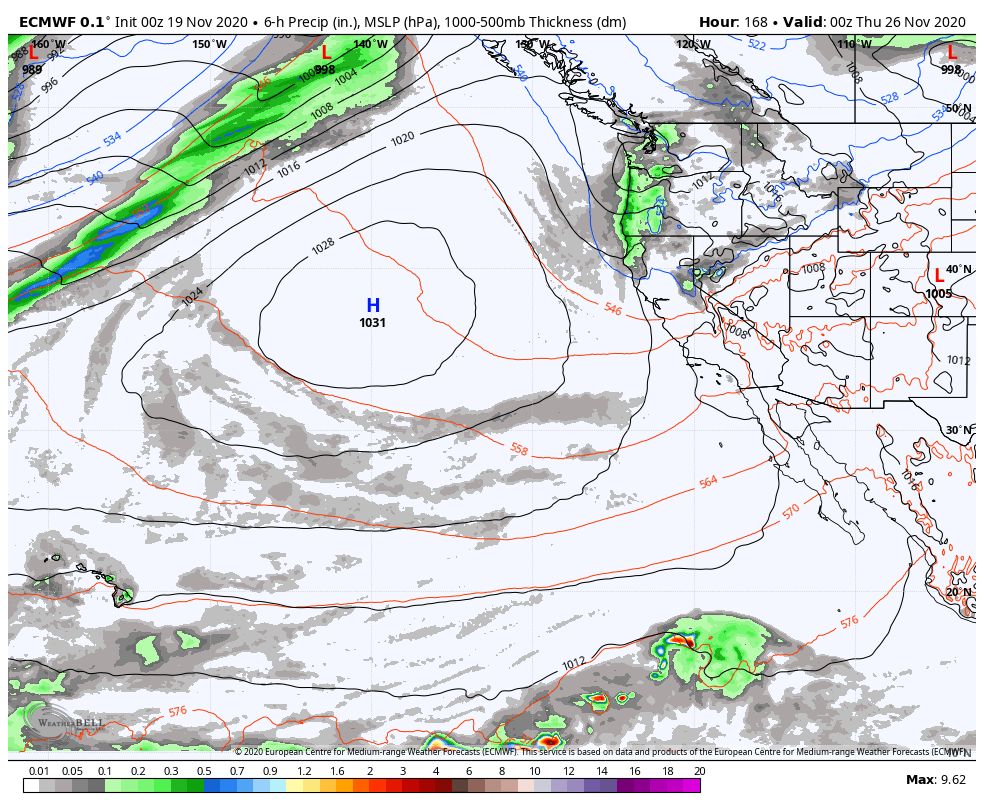 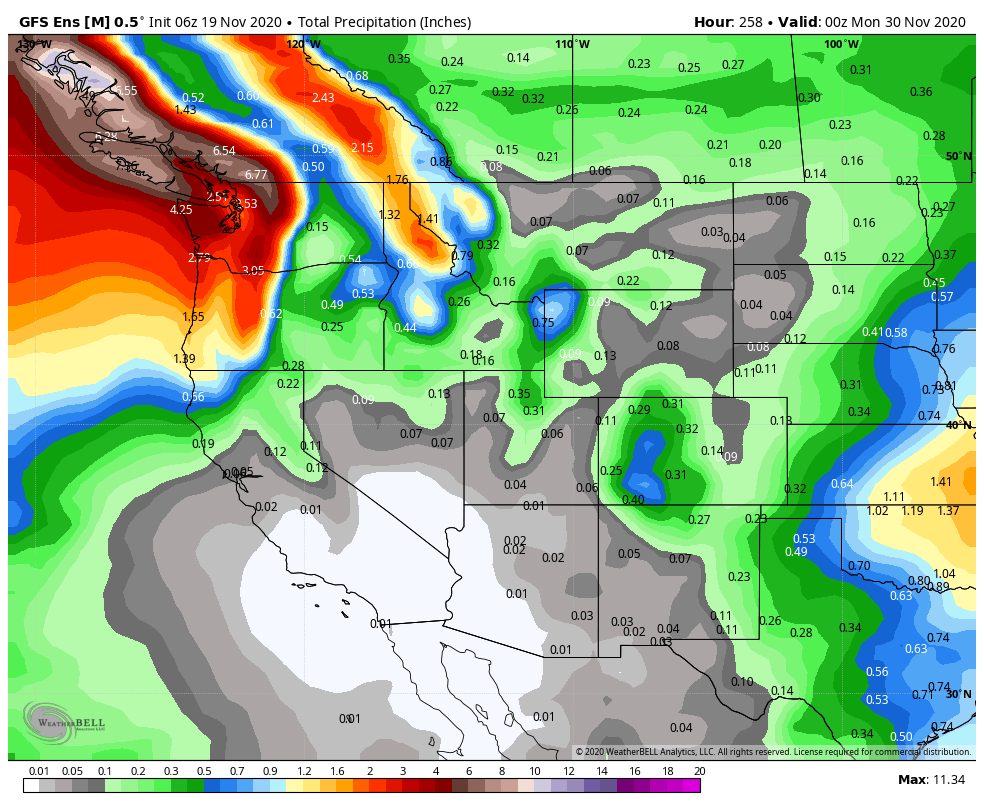 At the beginning of the month, we talked about weaker systems possible the 2nd week of November and wetter systems possible the 3rd week. That happened. Then up until earlier this week, it looked like the active pattern could continue through the last week of the month. The pattern is remaining progressive, but the troughs moving into the West Coast aren't digging far enough south for storms to drop into northern CA.

We were hopeful that the active phase of the MJO would progress through the Indian Ocean which typically helps with deeper troughs downstream over the West Coast. But the forecasts continue to show it weakening rapidly over the next 2 weeks and fizzling out. That may be part of the reason we have seen a change on the long-rang models in how deep the troughs are moving into the West Coast.

The PNA teleconnection pattern is forecast to flip from negative to positive during the last week of November, which is a West Coast ridge not trough pattern.

Looking at the European Weeklies forecast for the PNA, it suggests we flip back around mid-December.

It will be interesting to see where the active phase of the MJO heads in December. I would expect that on its next loop around it will continue through the Indian Ocean.

The long-range models are still suggesting that a storm digs south into northern CA around the end of the month 30th/1st. We will keep an eye on that. But going into December the forecast teleconnection patterns are not that favorable for strong storms in northern CA right now. The CFS model is showing higher heights over CA through the 1st week of December with the storm track into the pacific NW continuing. 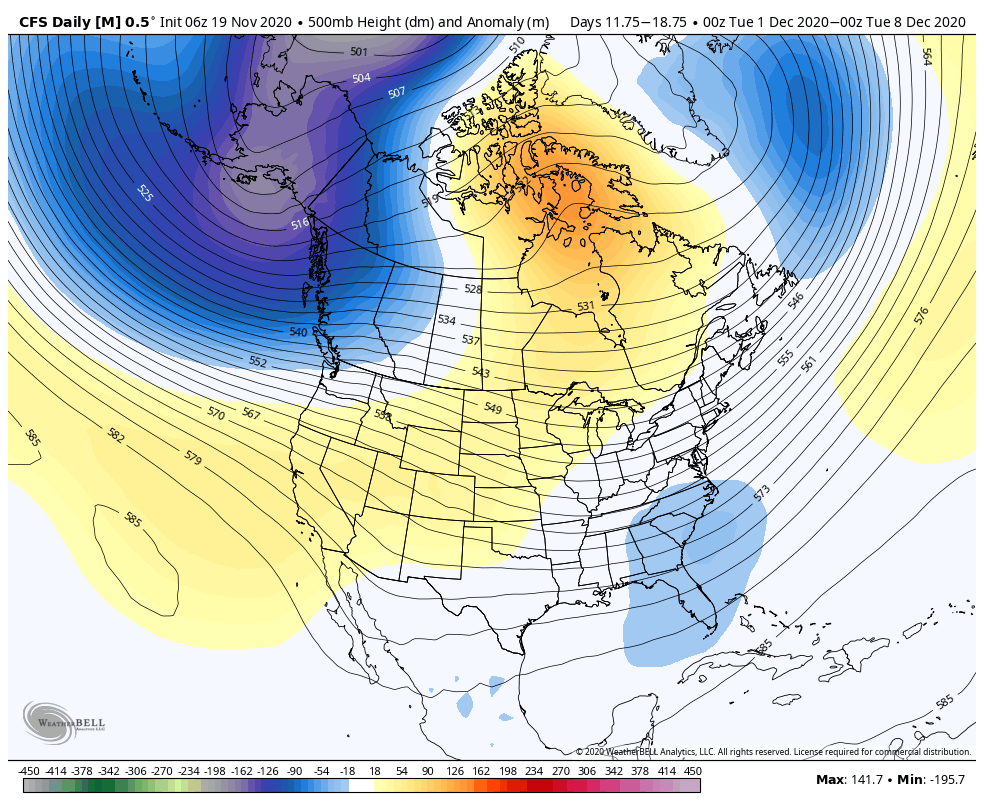 Then it shows lower heights over the West by mid-December, which almost lines up with the PNA forecast on the European weeklies. 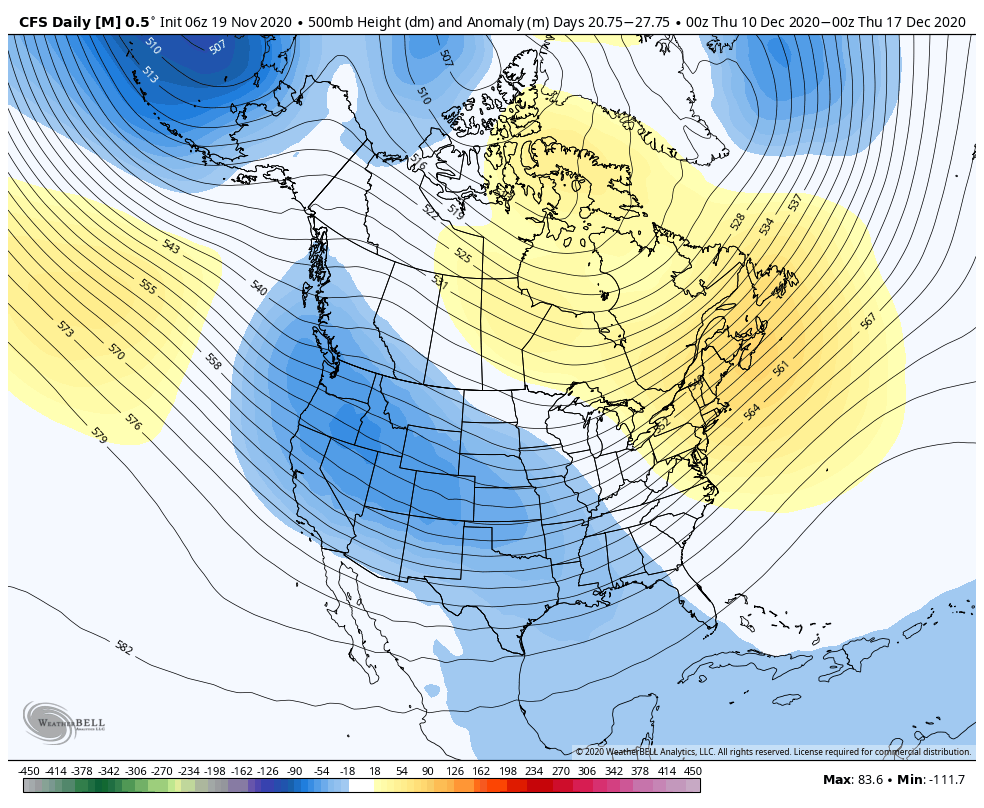 It's still very early in the season. We picked up a decent amount of snow on the mountains in November and it remains cold enough for continued snowmaking. We will continue to keep an eye on the long-range and look for better agreement and consistency in the long-range pattern, and when we could see a storm enter the 1-week window. Hoping for a snowy December pattern to setup eventually!

I'll likely skip a day here and there until we can get a more active storm pattern going again. Hopefully sooner than later!

If you are a loyal follower I have designed a few funny t-shirts based on our ongoing conversations each season. If you are interested they are available here in the Tahoe Weather Nerd Store.