The Good News: 3 storms over the last 2 weeks brought 1-3 feet of base-building snow to the mountains. Temperatures remain near average with cold nights for continued snowmaking. 7 ski areas in CA/NV are now open, with 7 more planning to open by the end of the month. Here's the list. 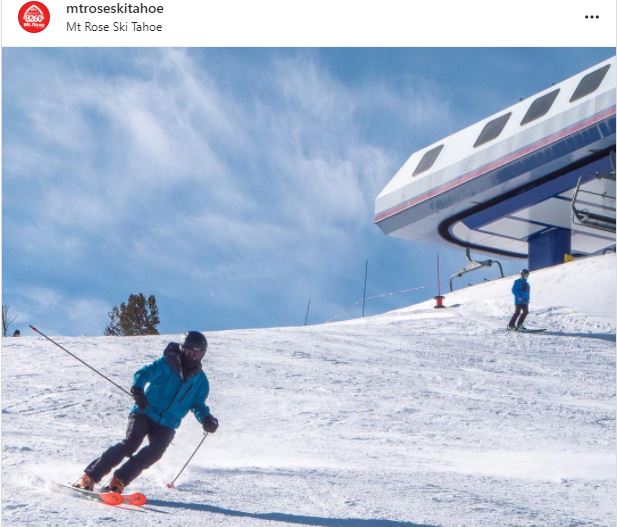 The Bad News: The weather for at least the next 2 weeks looks like a total snoozefest right now...

I was able to get most of the ski area reports from the last storm. Here are the totals along with the totals for the season so far, and a comparison to the average for the date. 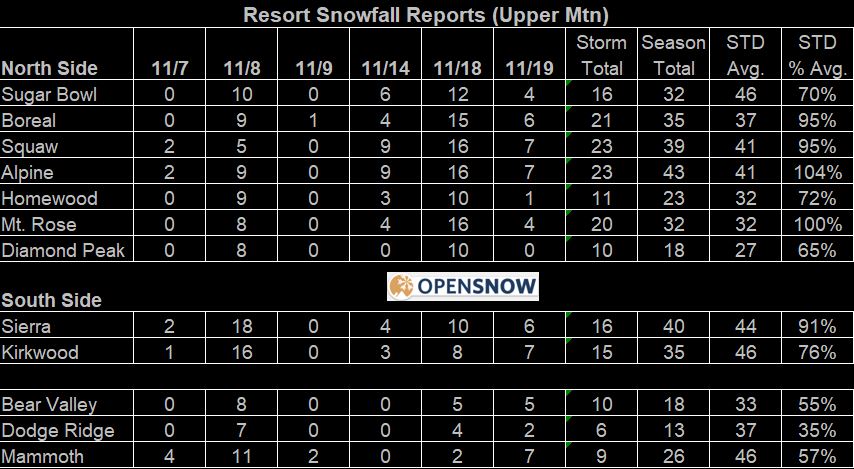 Now that Northstar and Heavenly are open they will be reporting going forward which would be just about all of the mountains reporting now.

Here is a look at the scorecard for the storm. I recorded one for the first two storms as well but didn't publish them due to a delay in reports from the ski areas. I put out a final forecast before a storm arrives, and then I post a scorecard after the storm is over comparing my final forecast to the reported totals. The goal is to provide total transparency and to keep a record of the average variance (5 seasons & counting). 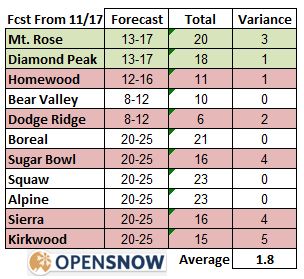 I'm not happy with the score I like to be under 1 inch. The 5-year average is a 1.5-inch variance to forecast. I continue to fine-tune my snowfall forecast calculator I've been developing for 15 seasons.

For Thanksgiving this week we should be thankful for fresh snow and open ski areas. Unfortunately for me, I'll be obsessing over the long-range outlooks looking for signs of a return to stormy weather. The pattern remains progressive for the next 10 days. We have troughs moving through Monday, Wednesday, and again around the 1st. 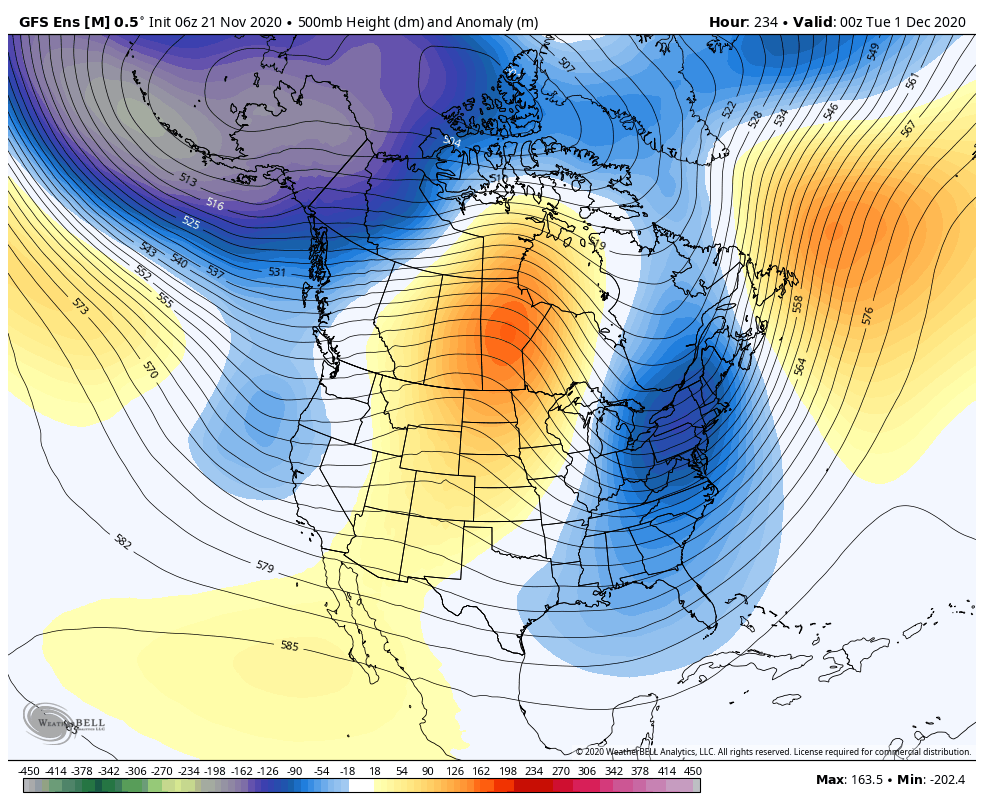 Unfortunately, these shallow and weak troughs will mean storms will have a hard time pushing south into northern CA. 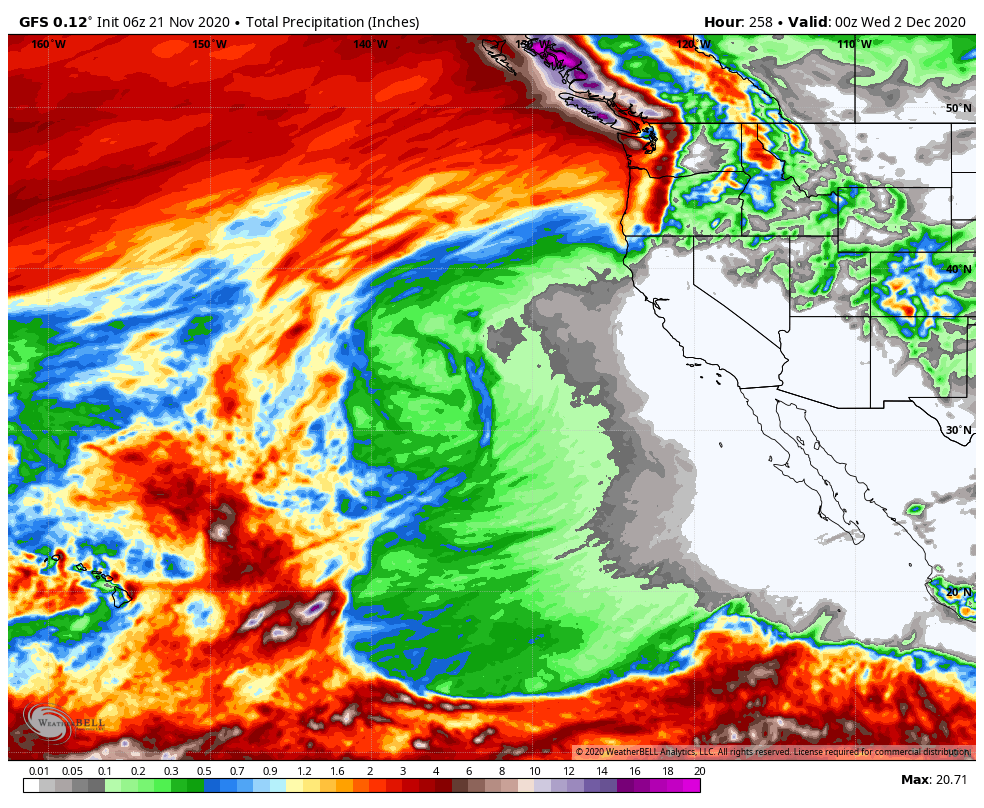 The European model is still showing the Monday and Wednesday systems trying to brush the Tahoe Basin with a few flakes on the southern edge of those two systems. We will keep an eye on that. We may see some gusty winds for the ridgetops with each system and reinforcing shots of cool air to keep temperatures near average.

Even though the deterministic model runs for the Dec. 1st system are keeping most of the precip to our north, there are enough ensemble members that bring light precip farther south that the ensemble mean runs of most models show the chance for light precip into the Tahoe Basin.

We will keep an eye on that as well. Nothing that exciting right now, but that's the only chance to see some flakes over the next 10 days. The pattern is remaining active just to our north. Earlier this month it looked like the active storm track could continue farther south into northern CA, but all models have trended to the north over the past week.

Looking into December, the long-range pattern forecasts point towards high-pressure possible building in over the West Coast during the 1st week of December. 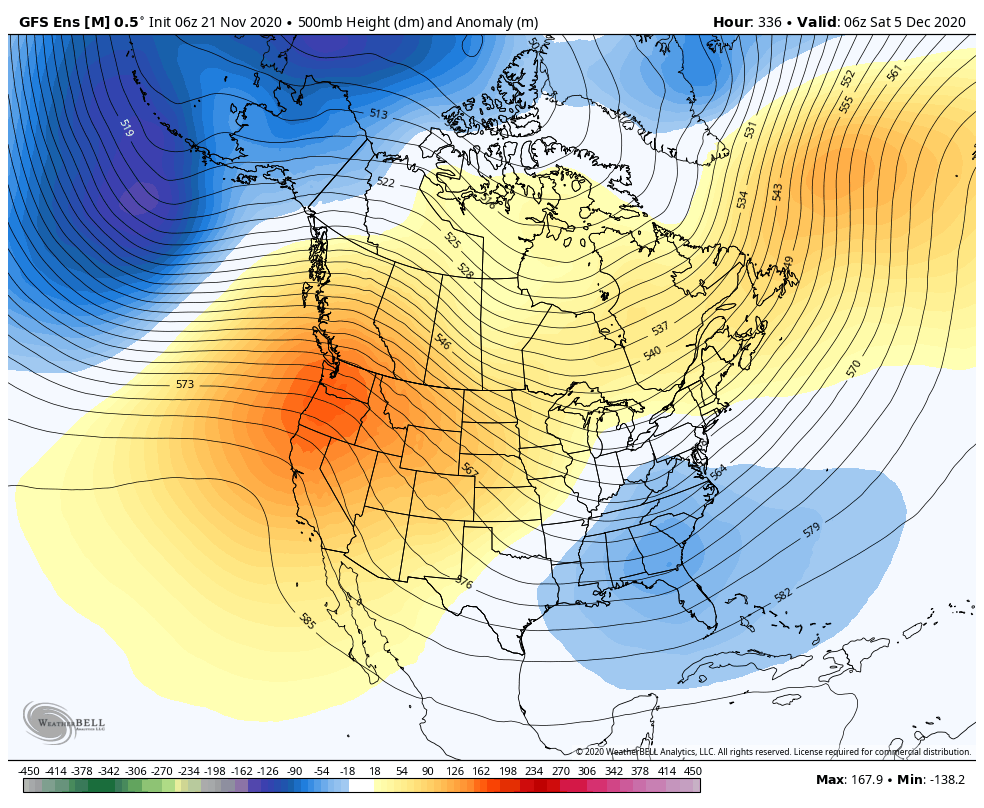 The teleconnection forecasts are trending towards a -NAO/+PNA pattern which usually locks a ridge in over the west for a period of time. That could be the first week of December and possibly into the 2nd week?

The long-range climate models continue to show the pattern possibly shifting later the 2nd week of December or around mid-month. We will be analyzing that a lot as we go into this extended period of quieter weather.

For the entire month, the long-range models are split on whether we will see the storm track dip into CA or stay to the north. It's enough of a split that the average continues to show above-average precipitation for the Pacific NW and equal chances of above/below average for northern CA. 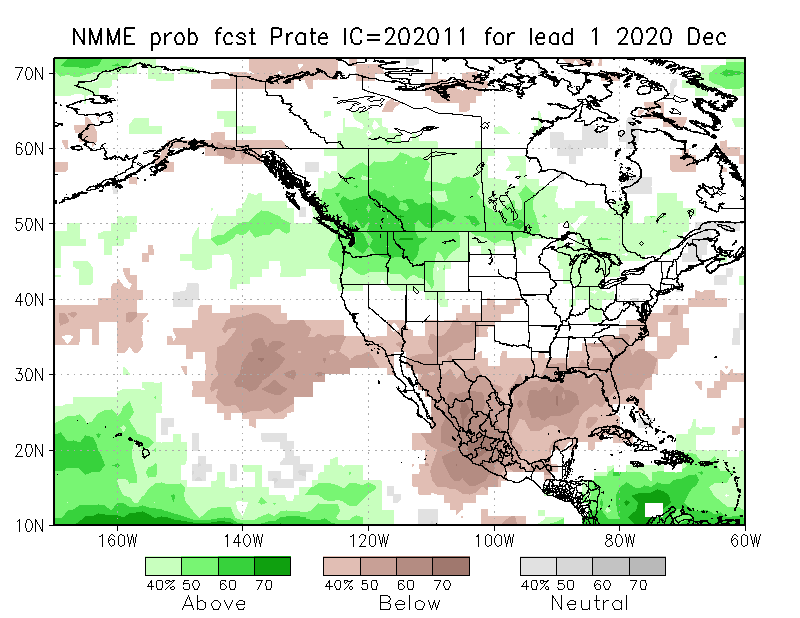 For now, we will watch to see if we could get any light snow over the next 10 days, and then our eyes likely turn towards mid-December to see if we loop back into an active pattern a month from the November active pattern. In the meantime, it's cold enough at night for continued snowmaking and terrain expansion as ski areas continue to open.

P.S. I discontinued the t-shirt store briefly as the shirts were a little more popular than expected and we ran out of a lot of sizes. I'll work on getting a better storefront going for the season along with more designs.