Give That Turkey a T-Shirt... 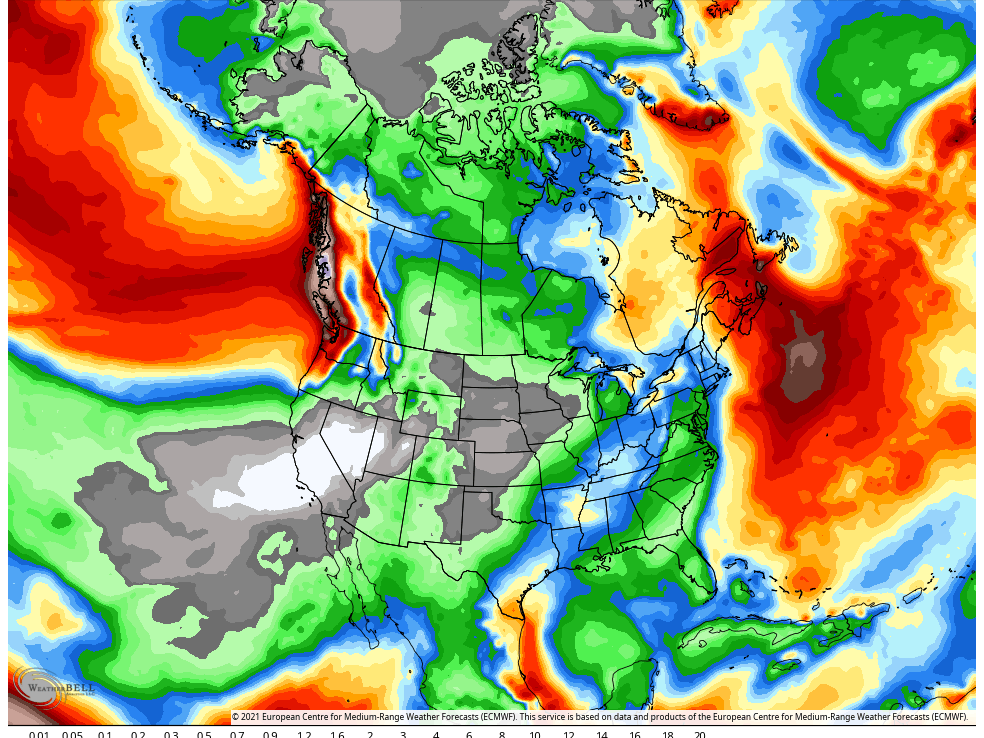 Mostly sunny weather is expected through the 10-day forecast period. We will see a slight cool down Tuesday & Wednesday and then sunny and mild weather expected for Thanksgiving day through the weekend. We may possibly see a change in the pattern during the 1st week of December.

It's a chilly and breezy Sunday morning for the mountains. That is a good things as the air has been mixing around and it looks like it was cold enough to make some snow on the upper mountains overnight. We are going to have to rely on snowmaking until we see some natural snow, which looks to be at least 10 days from now.

The dry pattern continues with clear skies through Monday. Highs in the 40s Sunday and into the 50s Monday as high pressure over the region begins to start shifting east. 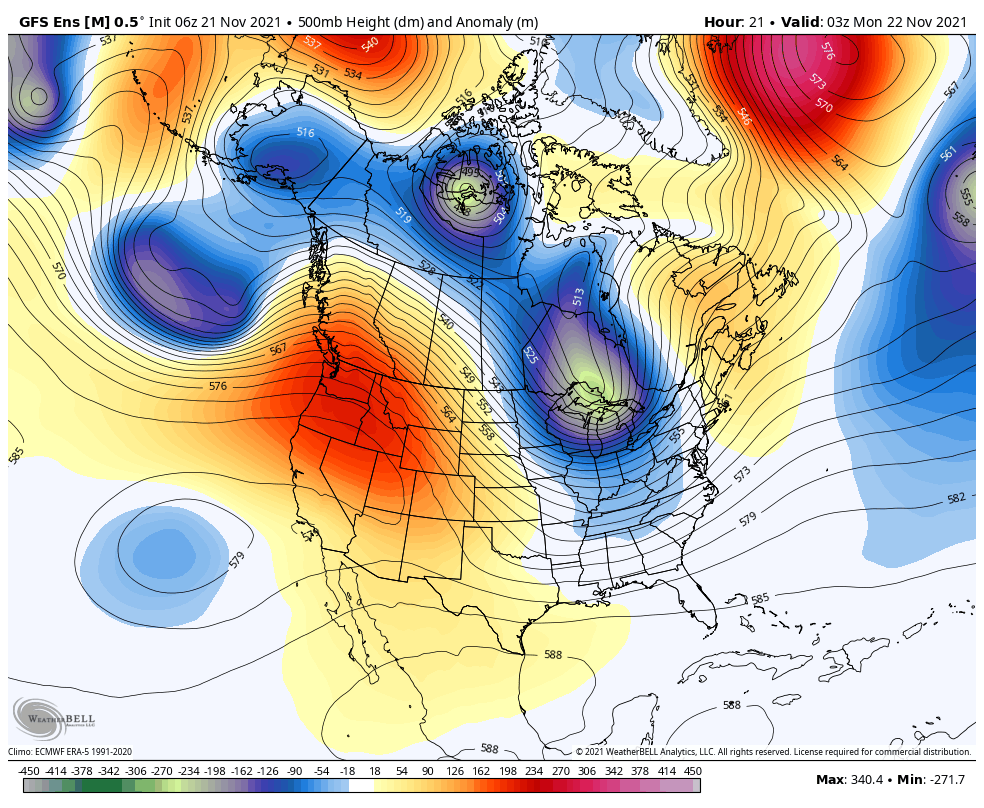 The snowmaking at night looks marginal but with breezy winds maybe we can make a little both nights on the mid-upper mountains.

A split trough swings through Tuesday bringing some colder air but staying dry with low-pressure systems staying to our north and south. 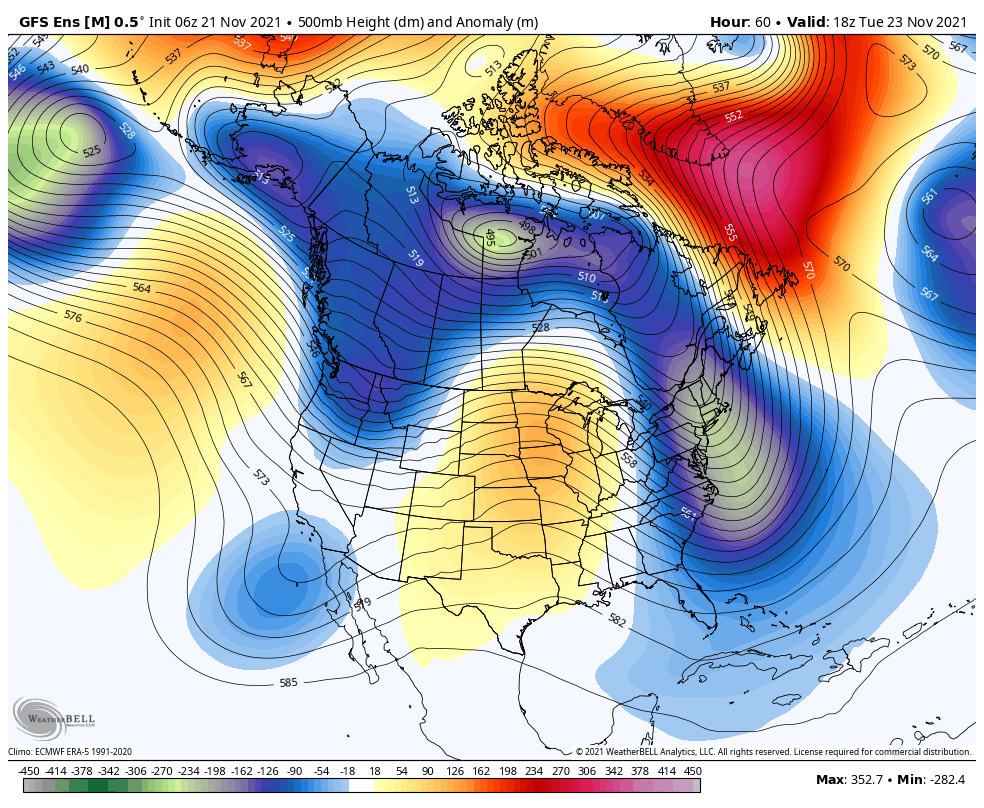 The good news is that the nights will be colder Tuesday and Wednesday night with lows into the 20s for most elevations. That should bring the best night for snowmaking Tuesday night and even with inversions starting Wednesday night we may still get a decent night, especially for the lower mountains.

Thanksgiving Day thru The Weekend:

By Thanksgiving Day through next weekend, we are expecting a strong high-pressure ridge to build over the region bringing dry and mild weather. 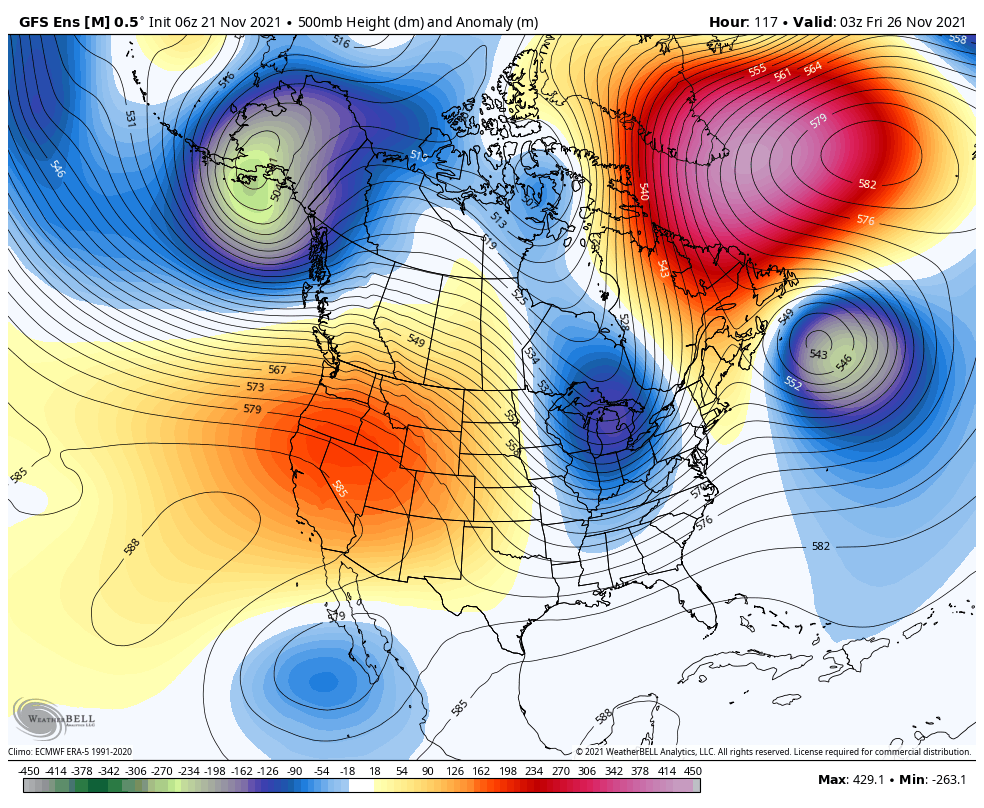 Here is a look at the temperature departures from average by the end of the week with the cold over the East and the warmth over the West. 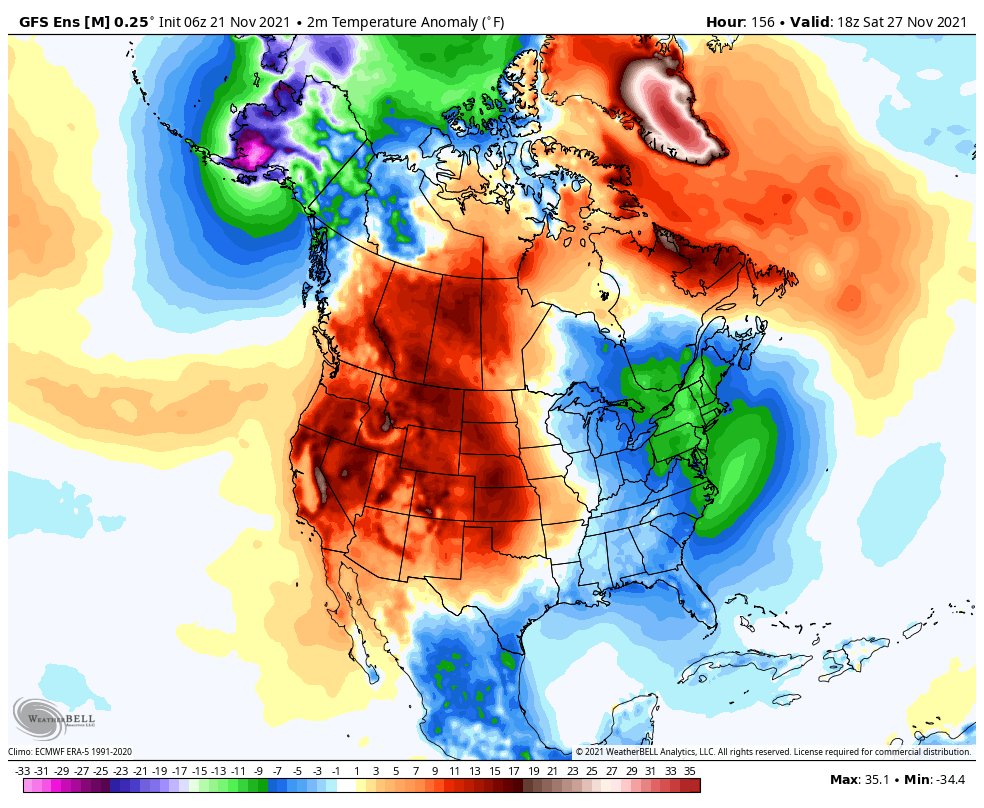 We will see mild weather with highs into the 50s starting Thursday. That's t-shirt weather for people who live in the mountains and are used to a colder climate. Unfortunately, it looks like both milder temperatures and overnight inversions may keep any snowmaking to the lowest elevations or make it impossible completely.

Not helpful for trying to get the ski resorts open, but most have already announced they are not opening until December now. It looks like we will end up with only 6 inches of snow measured at the Snow Lab for November, the 4th lowest since 1970. 2007 was the last time we saw less than 7 inches in November.

The latest forecast model runs show us staying dry through at least the daytime hours of the 30th which is pretty much through the end of the month. The storm deflector shield which is operated out of Fresno will be at full strength through then. 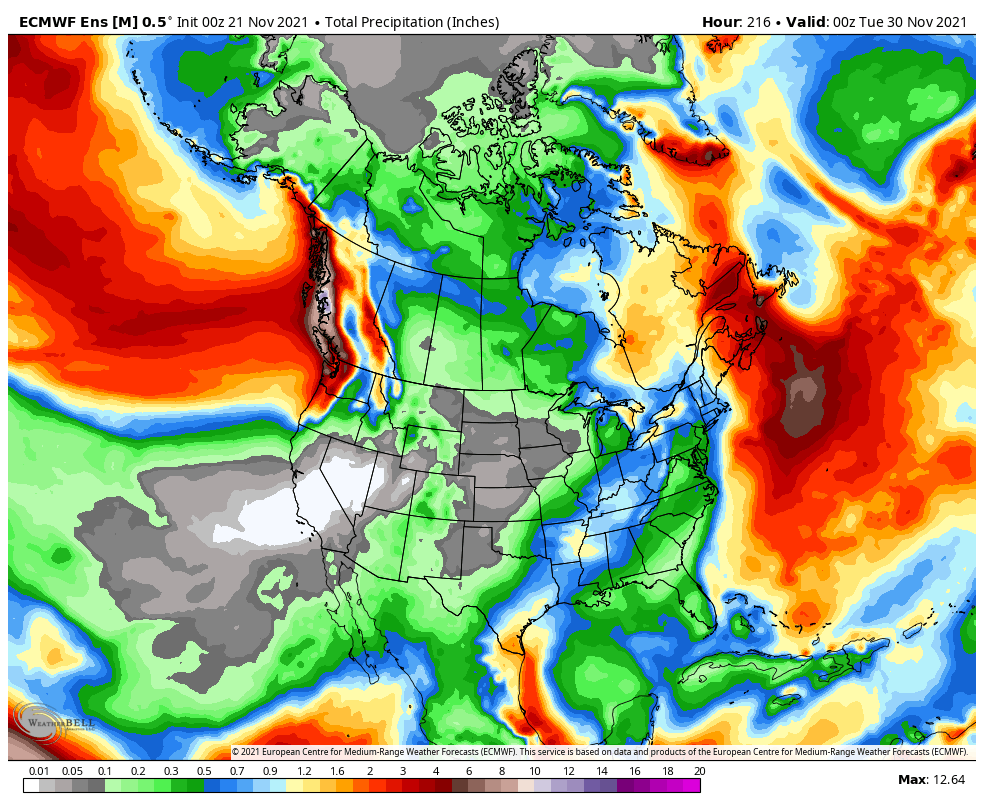 The fantasy range is beyond 10 days with day 10 today being the last day of the month. As we start the fantasy range on December 1st the long-range models are trying to start shifting the pattern right away in the new month. They are in decent agreement in breaking down the large ridge over the West and replacing it with a flatter ridge off the CA coast. 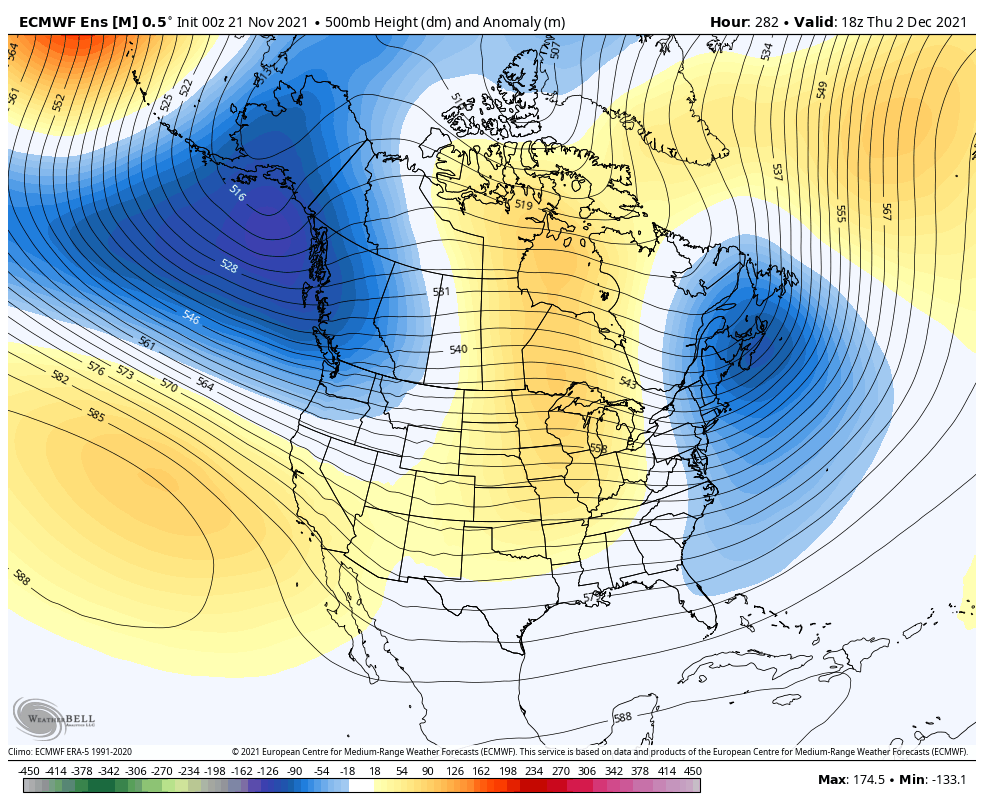 That large trough in the northeast Pacific is forecast to see storms start spinning up in it and moving into the Pacific NW through the 1st week of December. With the flat ridge off the coast, we would be on the southern edge of the storms, but we could see a few weak systems starting as early as the night of the 30th. Through the 1st few days of December, the ensemble mean models show light amounts of precip starting to add up. 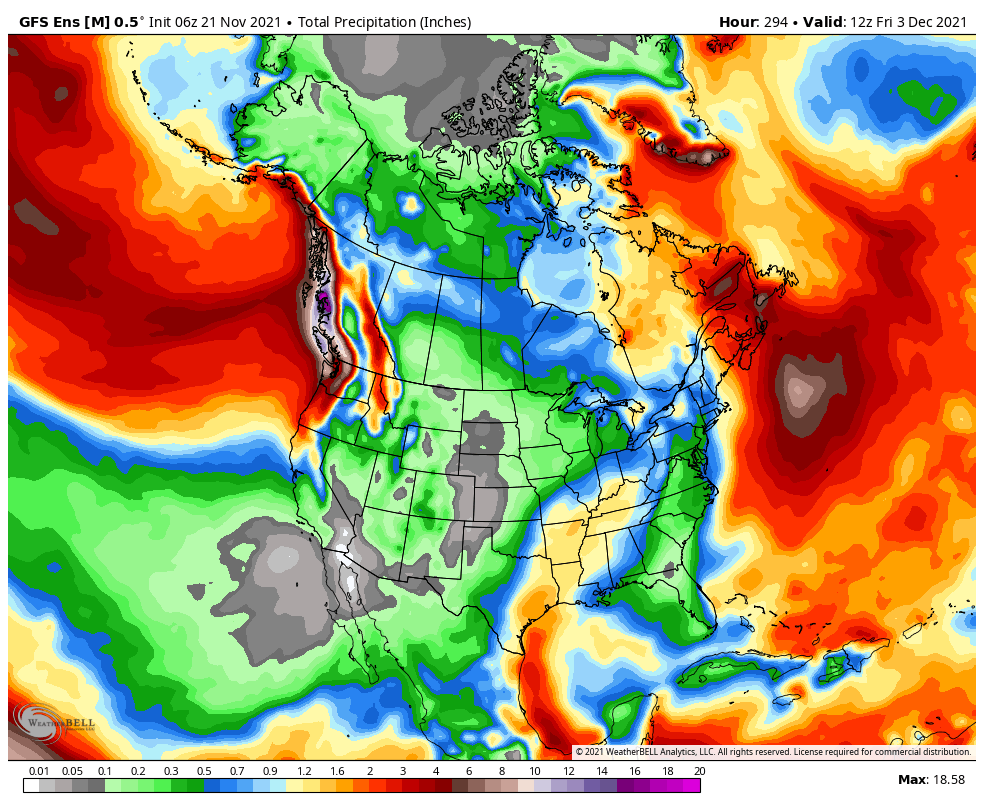 As we go towards the end of the 1st week of December we may see a deeper trough down the West Coast... 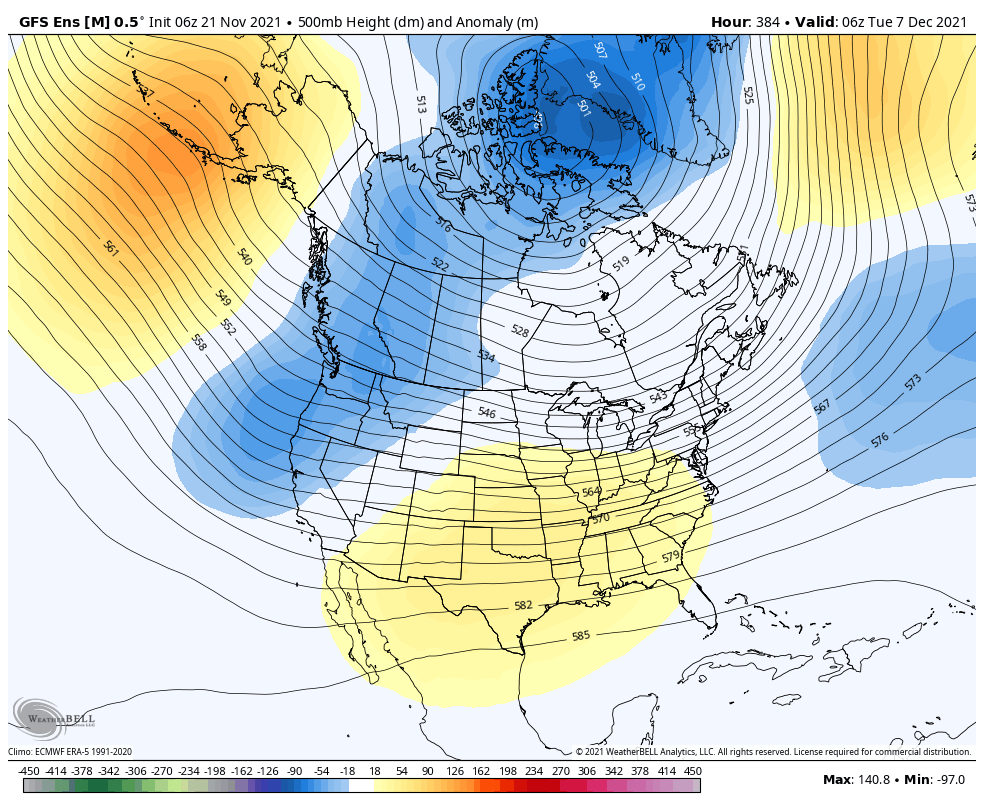 ...which would allow for the storms to dig farther south and bring us wetter storms potentially. 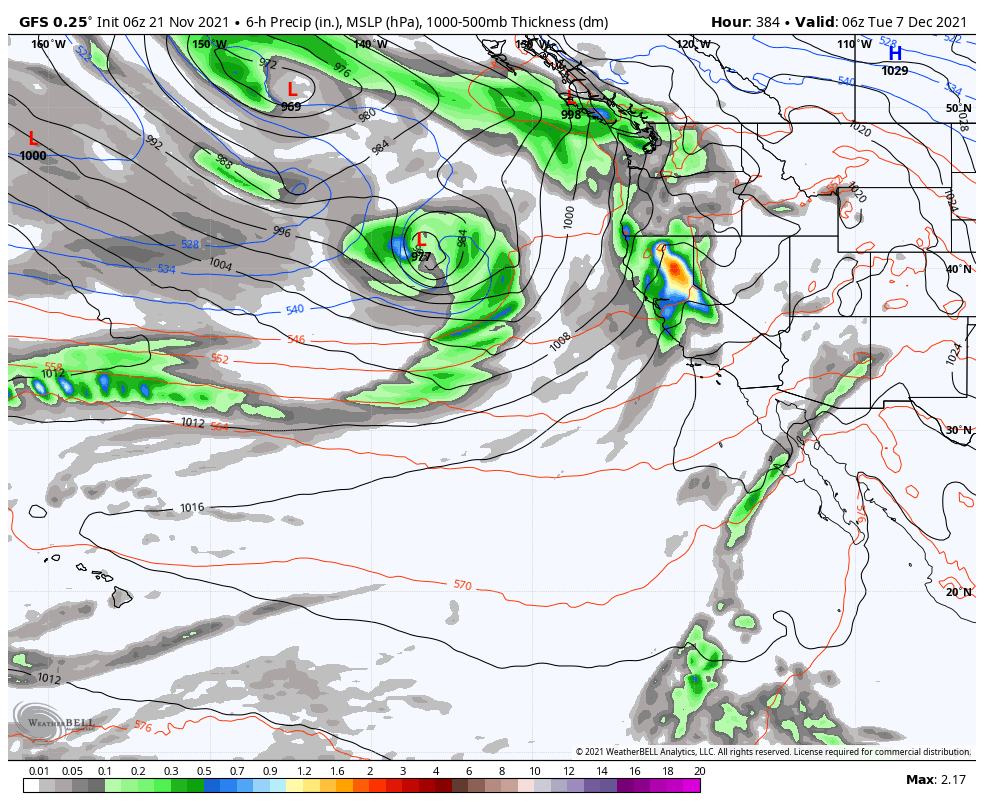 We definitely don't like to live in the fantasy range as it has that name for a reason. The storms being shown may just be a fantasy as the forecast models have low accuracy beyond 10 days. Heck, they are not good less than that either a lot of times. But there is a difference with the forecast this time vs the fantasy the GFS was having this past week showing storms Thanksgiving weekend. 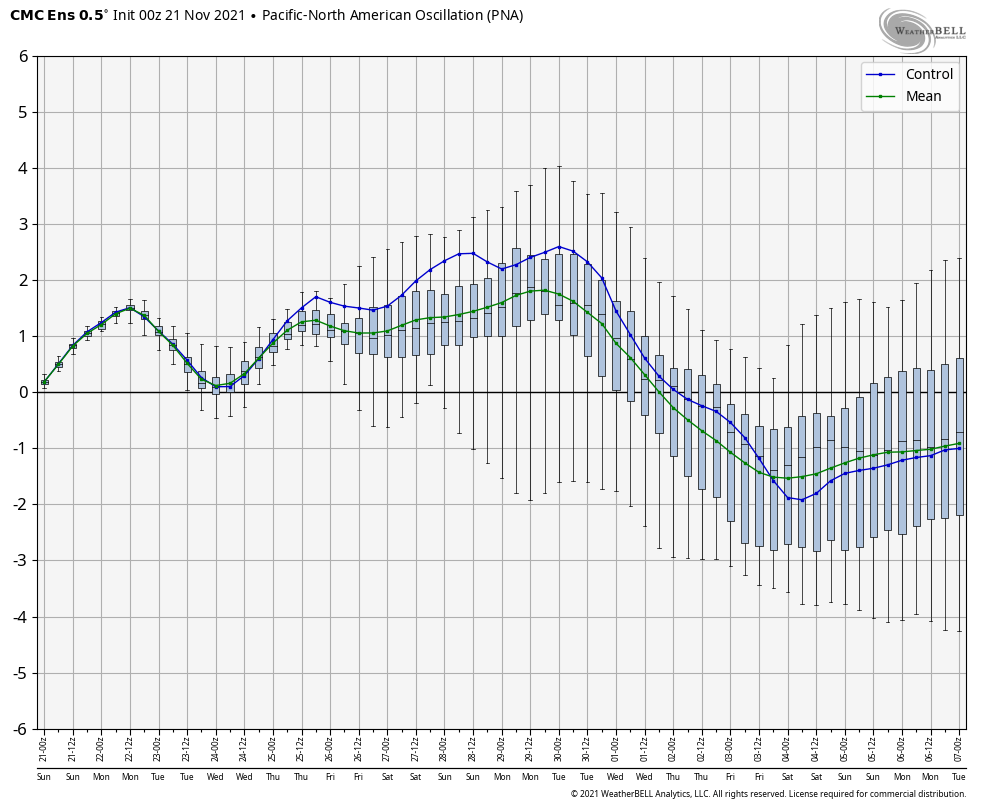 The GFS model forecasting storms earlier this week for next weekend had a foundation built on quicksand. The models showing a potential pattern change during the 1st week of December is built more on a solid dirt foundation. We will need to get the change into the 10-day window to get a wood foundation, and then the 5-day window for a more concrete foundation.

This will be the focus over the next 10 days. Let's hope we can get things going in December...