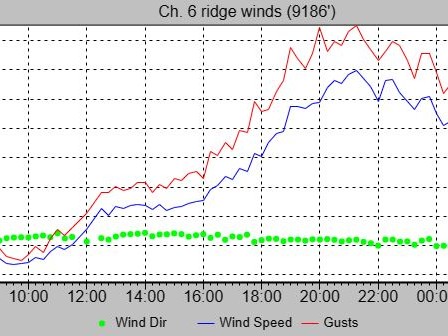 Cold and windy on Monday. The cold/dry pattern lasts through the end of the week. We could see weak systems for the weekend into the end of January. Wetter storms are possible in the first week of February. The below-average temperatures are expected to continue through the long range.

We saw the ridgetop winds reach 70+ mph by the end of the ski day on Sunday which made for very cold wind chills and closed some mountain lifts. The ridgetop winds continued to increase Sunday night, especially southwest of the lake near Kirkwood where they are on the west slope, and get more effects from the downsloping winds.

Of note is that when I forecast the wind speeds I try to forecast them during ski area operation hours, which is why yesterday's forecast was for, "ridgetop gusts up to 60+ mph by the afternoon and even stronger Sunday night". It's tricky to try and give an accurate forecast for every ski area when we have northeast wind events as the mountains on the east side of the lake tend to have lower wind speeds, higher on the west side, and much higher at times southwest of the basin.

The forecast was well advertised all week for strong northeast winds Sunday into Monday. It looks like the winds peaked around 70+ mph for both the top of Palisades and 80+ mph for Kirkwood by 4 PM Sunday, but then increased A LOT at Kirkwood with gusts tapping 190 mph up top overnight!

West of the lake up near the crest near the top of Palisades the winds continued to gust in the same range overnight between 50-70 mph. 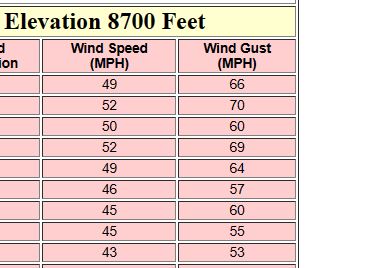 The recorded wind gusts on the sensors on the east side peaks were even lower overnight. As of 6 AM Monday morning, Kirkwood was still gusting up to 150+ mph from the northeast up top, Palisades up to 60+ mph, and Heavenly is only showing gusts up to 20+ mph on their highest sensors. 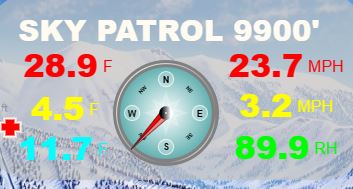 The winds are forecast to stay in the range that they are currently in through Monday morning before coming down some through the afternoon, as the low to our southeast moves farther south and lessens the tight pressure gradient over the Sierra. If you are going skiing you may encounter much different wind speeds depending on the mountain and elevation you are skiing at Monday.

Overall it will be dry and cold through Thursday, with a slight warmup possible for Friday. Mostly sunny skies are expected throughout the week. Highs are in the 20s Monday with the winds making it feel even colder. Highs in the 30s Tuesday through Thursday, and then we could break into the 40s Friday for the lower elevations.

The winds from the northeast will continue through Thursday and turn to the west Friday. The wind speeds will be lower starting Tuesday, but it could still be breezy on the peaks making it feel a bit colder than the actual air temperatures.

By Saturday the high-pressure ridge near the West Coast is forecast to shift northwest away from the coast. 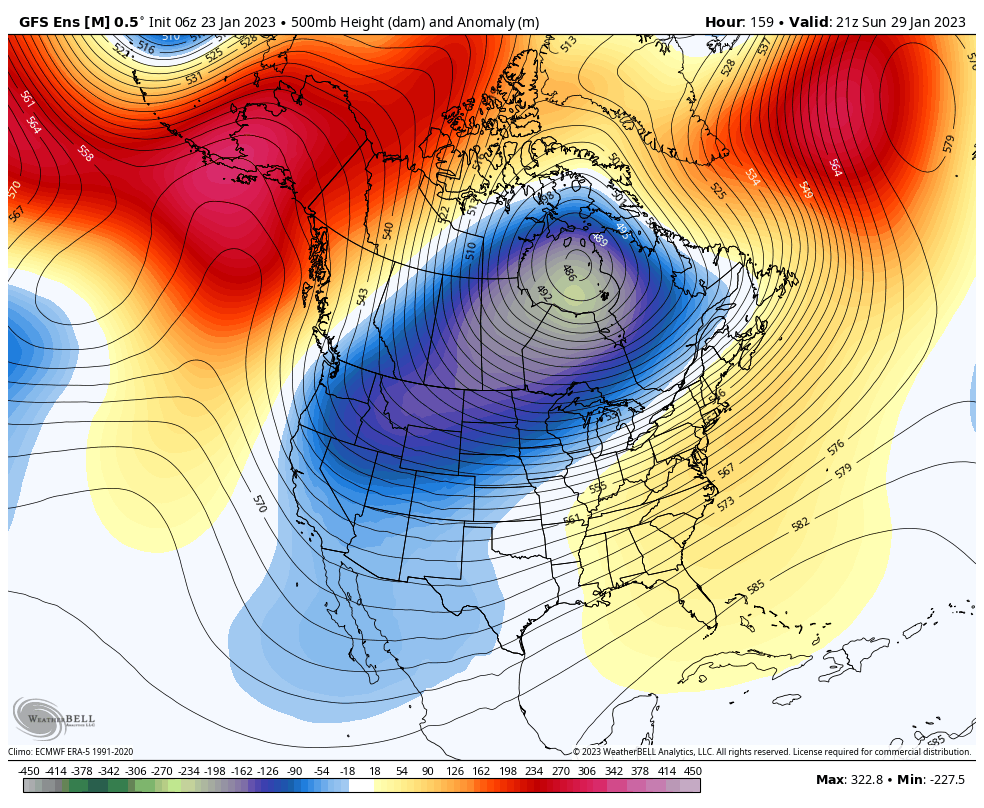 That will start to drive some colder air back into the region over the weekend with highs dropping back into the 30s. It could also open the door to weaker systems dropping down from the north on the west side of the trough, but possibly staying over land and therefore moisture starved.

The latest model runs show a system Saturday sliding down to our easy with only some clouds at best. Then a 2nd system from the north Sunday could track a bit farther West into northern CA and could bring us some snow showers. 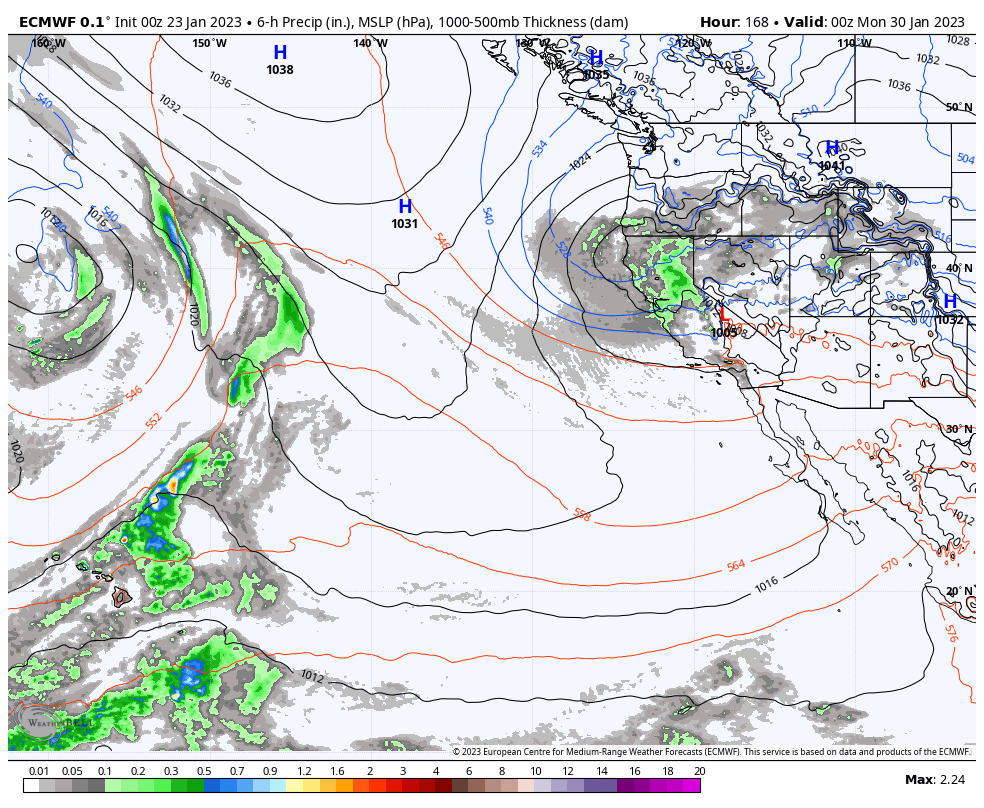 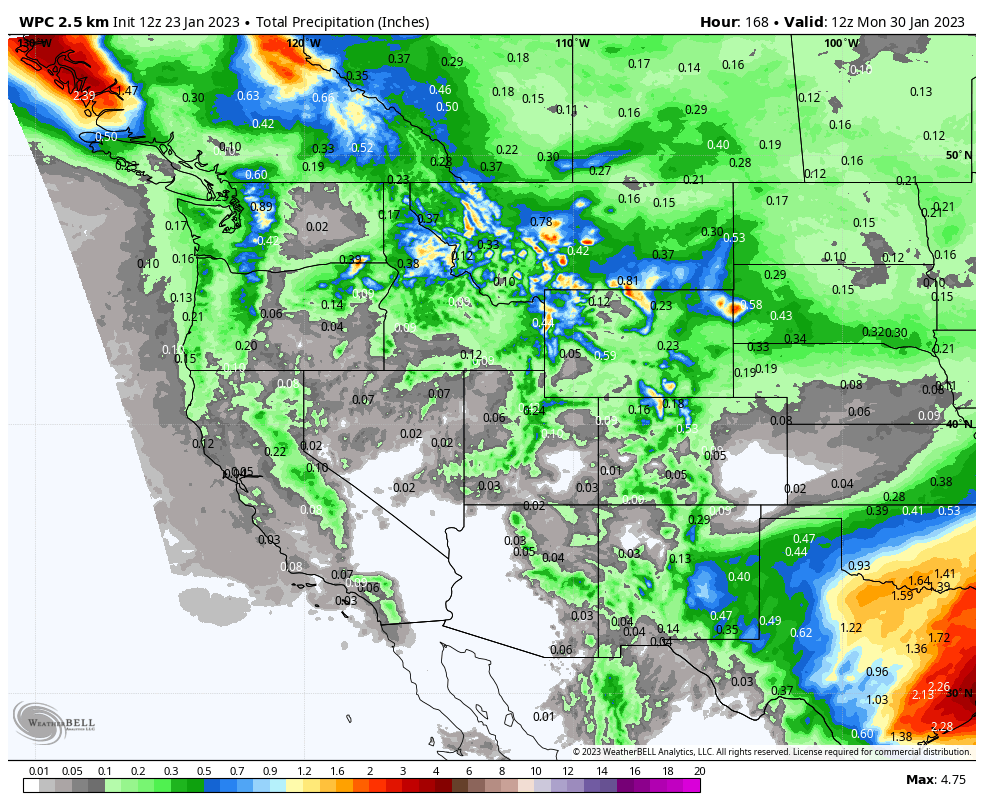 We'll continue to watch the trends on the track of the Sunday system all week. If the trough digs a bit farther west by Sunday the track of the low could be closer to the coast pulling in a bit more moisture. I'll likely start taking a look at potential snowfall by Wednesday morning if the models continue to show this system for Sunday.

A 3rd cold/weak system could drop down from the north around next Tuesday the 31st. As we go through the end of next week into the first few days of February, the long-range models continue to show the mean ridge position in the northeast Pacific shifting up near the Aleutians with a broader trough over the West Coast. 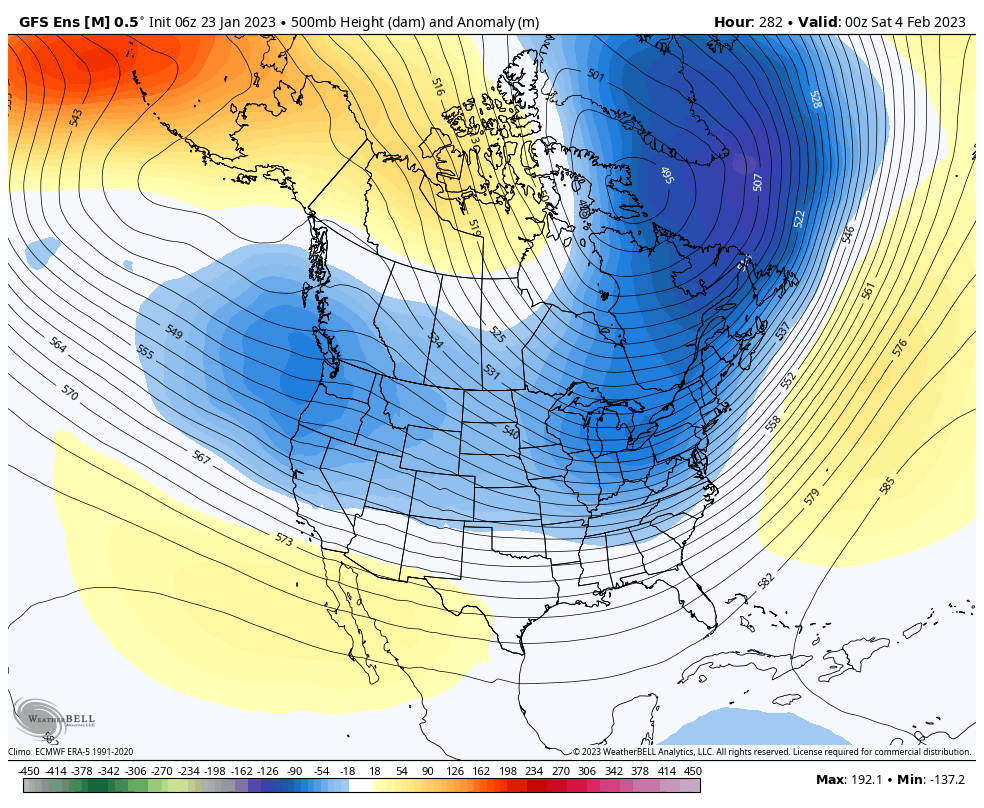 That would open the door to wetter storms spinning up in the eastern Pacific and moving into the West Coast. What's interesting is that most of the ensemble mean models, which average dozens of ensemble member runs for each model with slightly different starting input, are showing wetter storms moving into northern CA by later next week. 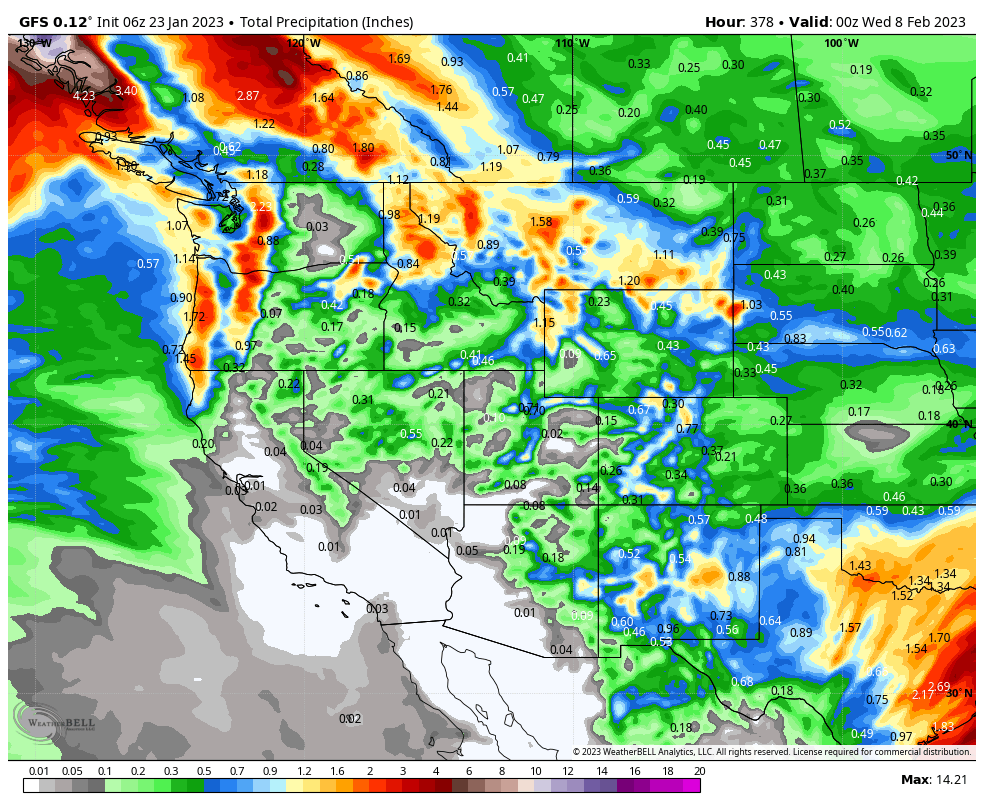 They are struggling with how deep and how far west the trough digs over the West Coast. They are showing a flatter high-pressure center off the West Coast that keeps the storm track to our north into the Pacific NW. Meanwhile, some other models like the Canadian are very wet later next week as we go through the first few days of February. 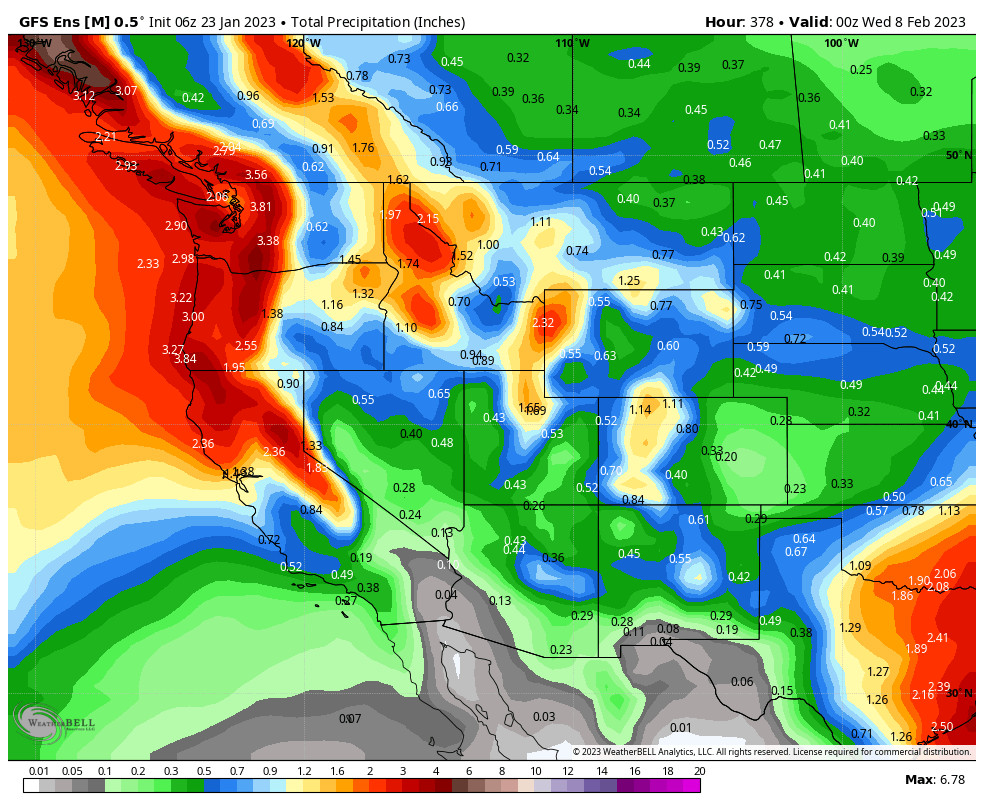 I wouldn't worry yet if you are seeing some dry GFS model runs, I'd start to worry more about not getting wetter storms if the deterministic models don't show wetter storms for the first week of February by next Monday. We'll continue to watch the trends all week.

Beyond the 1st Week of February:

I've mentioned a few times now that I think the ridge wants to set up near the West Coast more than not for 2nd half of January through February. The trough digging farther west for the first week of February may be short-lived.

That doesn't mean no storms. We can see the pattern shift at times to allow in a storm, but overall from what I'm seeing currently it looks like the rest of the month could see below-average precipitation in total. We'll have to see how the first week of the month turns out. Hopefully, I'm wrong.