Moisture will funnel into southern Utah this week with heavy snowfall likely in the high elevations and much needed rain in the valleys. Northern Utah will see a few snow showers. The pattern continues to gradually shift toward a snowier pattern.

Powder is piling up around the collective. Get your Mountain Collective pass today for the 2019/2020 season and shred 18 dream destinations with no blackout dates! Visit MountainCollective.com to buy your pass today.

Our cut-off low is slowly working its way toward the coast of Southern California.  By tomorrow, it will be in position to start feeding moisture northward into Arizona and eventually Southern Utah.  Snow should begin by Tuesday night with snow levels initially around 8000 feet. Snow will then continue off and on thru Thursday with snow levels falling down to 6500 feet.  Rain will fall in the low elevations of Southern Utah.  As for total snowfall amounts, we can expect 12-18" in the high elevations of Southern Utah by Friday.  There is a possibility, if the more bullish models are correct, that we could approach 2 FEET of snow.  Here is the total snowfall expected thru Friday: 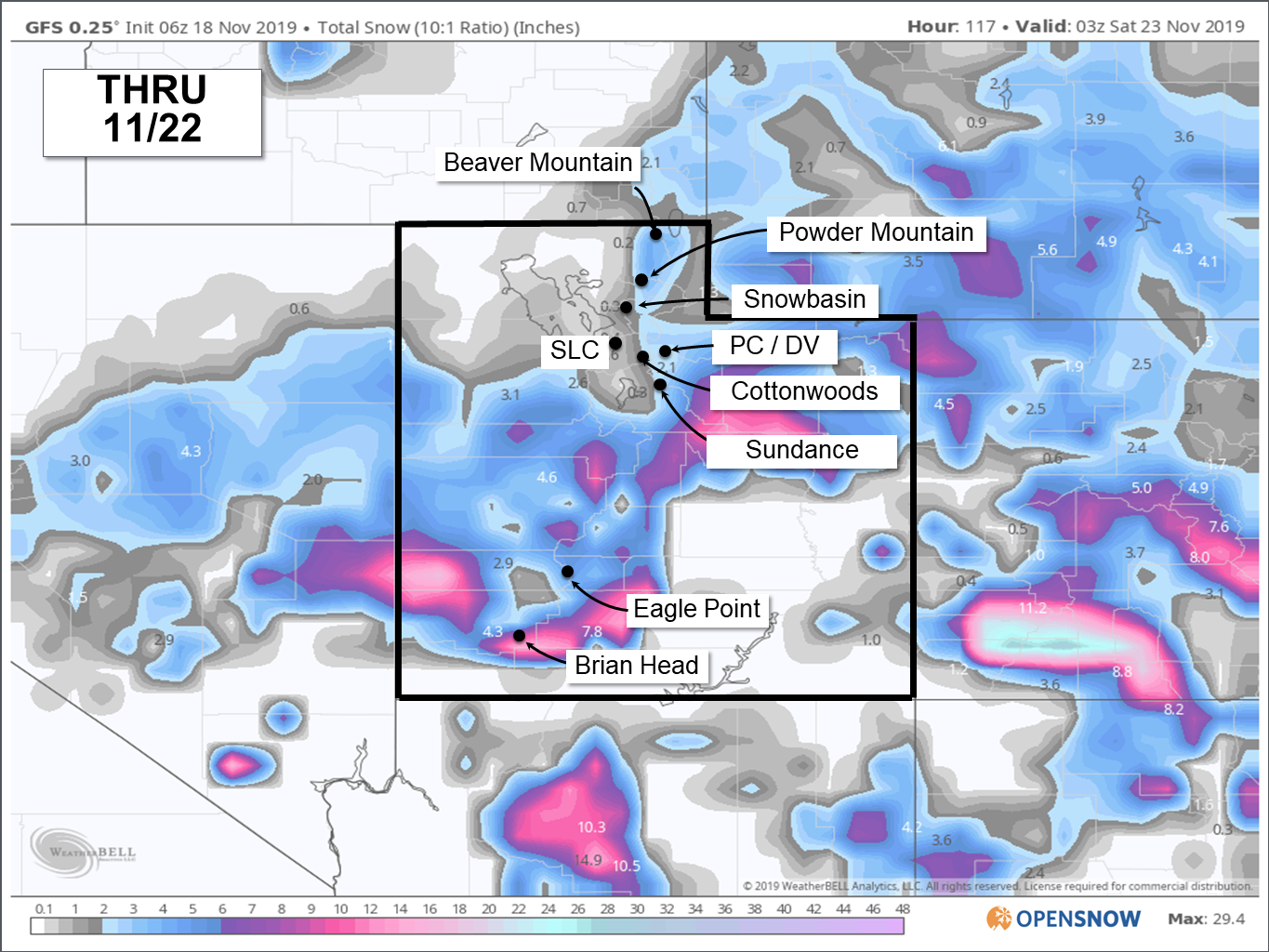 As for Northern Utah, the Wasatch will largely only see scraps.  However, a few inches cannot be ruled out. The southern slope of the Uintas could get more.  Amounts farther north are very dependent on just how far north this moisture can penetrate.

We will clear out heading into the weekend as the low pressure moves east.  A brief period of ridging and some beautiful, sunny weather before the next system moves into the region.  This storm looks weak, but should impact much of the state with at least a bit of high elevation snowfall early next week (November 25-26).  GFS currently portrays the following amounts: Again, probably only a few inches, but perhaps if we are lucky we can get some good orographic enhancement and get some moderate snowfall prior to Thanksgiving.  As I always say, it's better to have some storm energy than no storm energy because then you at least of a chance it could over-produce.

At this point, it looks like we may clear out for Thanksgiving Day itself, but the overall pattern is shifting. I spoke about this in yesterday's post but current indications show the ridge retrograding and strengthening farther out in the Pacific. This should provide a storm track that will allow for stronger, more moisture-laden systems to push into the Western U.S.

Of course, confidence is always low outside of 10 days.  Right now, we are some where between 10 and 14 days from this occurring.  We should have a much better idea if this is for real or not by the end of this week.