Record hot temperatures today and tomorrow (Saturday and Sunday), then a dramatic cooldown by Tuesday as a deep, cold trough drops down the Rockies.

Earlier this week we had a brief cooldown where temperatures dropped into the 60s and 70s during the day with 30s, 40s, and 50s at night. It was glorious! However, we warmed back up quickly. We are now near record levels with temperatures expected to come close to 100F today in SLC. There have only been two 100-degree September days ever in SLC -- if it were to occur today, it would be in rarified company.

Winds pick up by Sunday night into Monday as a deep trough approaches. This trough is going to drop down along the spine of the continental divide and the coldest air will remain east of the divide. Here you can see the coldest air (relative to normal) is in the Denver-area: 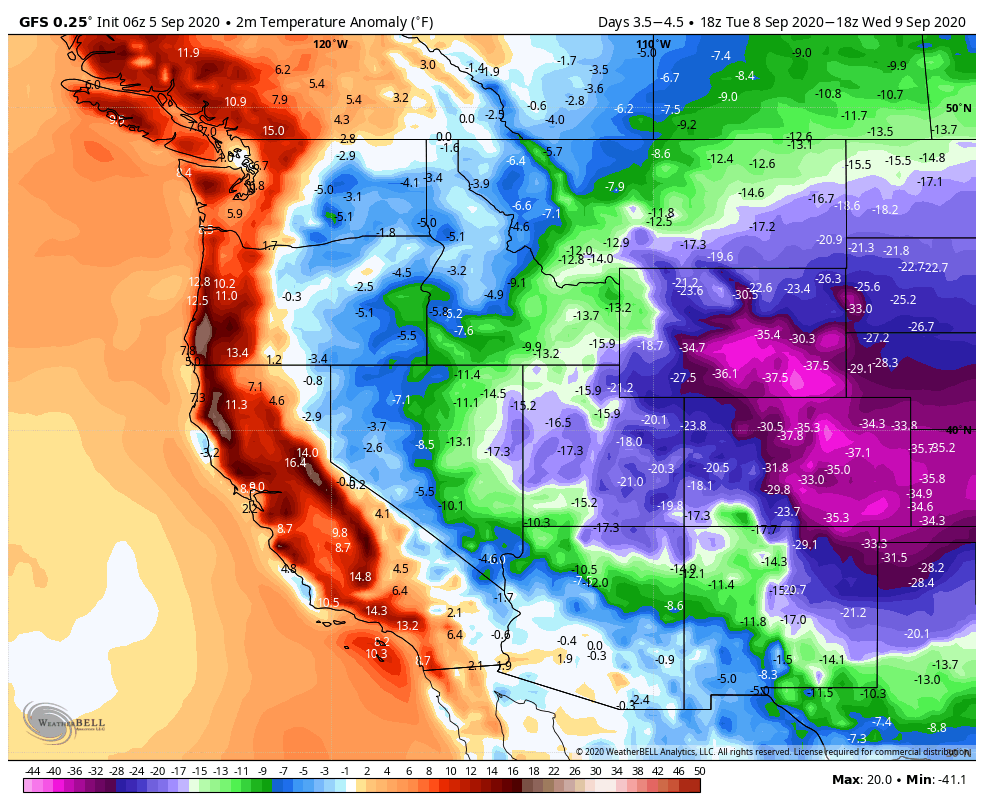 Still, we should drop 30+ degrees from today and tomorrow. Tuesday will be the coolest day with highs only in the 50s and 60s. As mentioned, the Front Range of Colorado will see the brunt of this trough. For example, Ft. Collins, CO -- where I lived for several years and got my undergrad degree -- is going to be 99 today and tomorrow. But as of right now, the forecast high temp on Tuesday is 40F with snow. That is a drop of nearly 60F in only two days!

As for snowfall, the mountains of Colorado, especially along and east of the divide could easily see a foot or more. Accumulating snow is even possible along the urban corridor of Colorado. However, here in Utah, limited moisture will make it this far west. The Uintas could squeak out a couple inches -- with perhaps a dusting on the peaks of the Wasatch. Don't be too shocked to see a bit of white on the peaks on Tuesday.

The cool air will hang around a bit longer this time, but still only a few days max. High pressure will re-establish itself over the region later next week. I expect warm weather to return, but at this point it looks unlikely to be anywhere close to where were are at today.