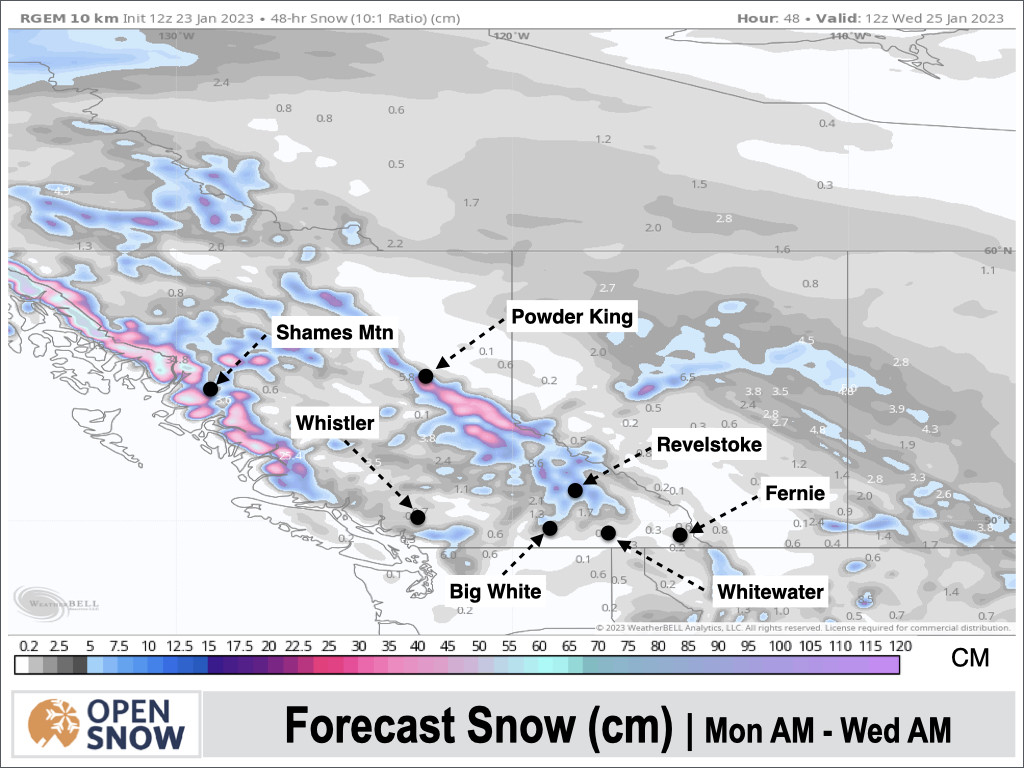 Two storms will move across Northern BC on Mon-Tue favoring Shames Mtn & Powder King while Southern BC will see a glancing blow with Revelstoke looking more favored than areas further south. Milder & drier conditions prevail Wed, then a series of storms will impact BC from Thu to Sat favoring the Interior. Arctic air will also arrive over the weekend.

Saturday's storm produced light to moderate snow totals for most areas. Whistler and the North Shore Mountains picked up 10-17 cm (4-7") of snow on Saturday, while Mt. Washington, Manning Park, and the Interior received 2-10 cm (1-4") for the most part. A few areas such as Kicking Horse and Fernie missed out entirely.

Light snow showers also moved in late Sunday night with snow totals on Monday morning ranging from 0 to 2 cm across Southern BC.

Northern BC did better than expected over the weekend with snow totals on Saturday-Sunday including 45 cm (18") at Powder King, 28 cm (11") at Shames Mountain, and 7 cm (3") at Hudson Bay Mountain.

Forecast for Monday to Tuesday:

A weak disturbance moving through from the northwest will bring light snow showers and flurries to the Interior of BC during the day on Monday.

Another weak disturbance will move into Southern BC from the northwest on Monday night and Tuesday with off-and-on snow showers expected across the Interior and eastern slopes of the Coast Range. Heavier snow can be expected across Northern BC:

This will be a marginal setup with enough moisture arriving via northwest winds to result in snow showers across the Eastern Coast Range around Coquihalla Pass and Manning Park. I'm expecting these areas to pick up 2-8 cm (1-3") of new snow on Tuesday.

Snow levels will range from 400-900 meters (1.5-3k feet). Winds will also be moderate out of the northwest on both Monday and Tuesday. 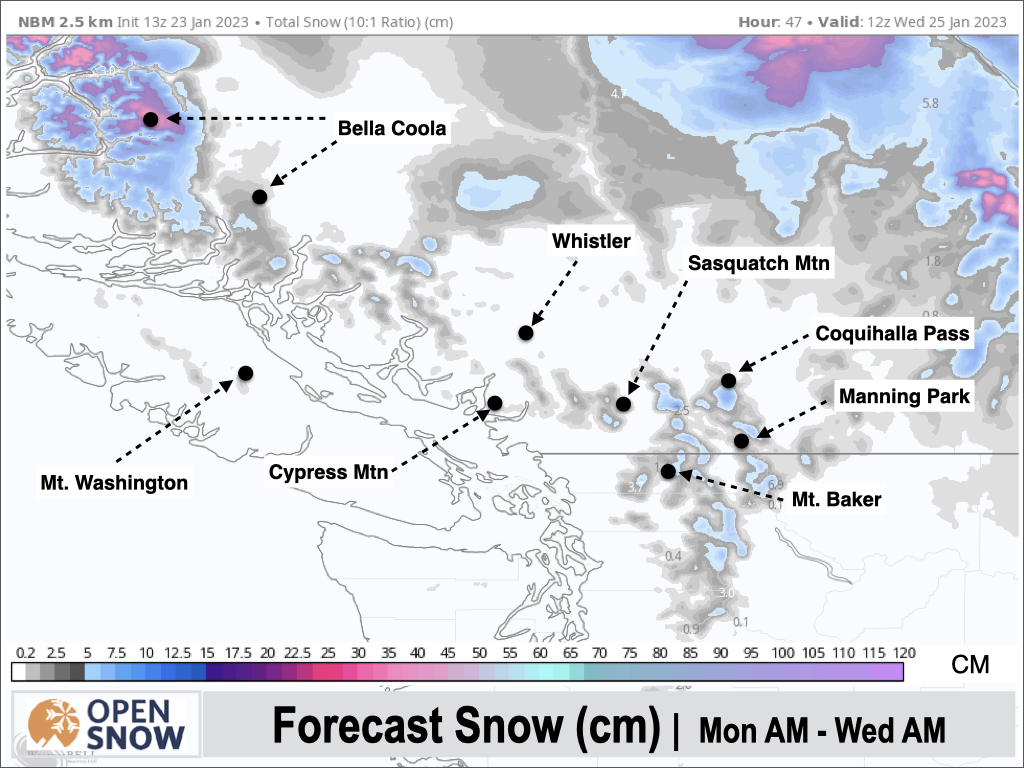 Over the next two days (Monday AM to Wednesday AM), Revelstoke, Kicking Horse, and Rogers Pass will be the most favored Interior areas and should pick up a total of 2-10 cm (1-4") of snow with heavier snow expected just to the north in the Cariboo Range.

If these disturbances track just a bit further south than expected, then I wouldn't rule out higher totals.

Further south, snow totals will generally range from a trace to a few centimeters. Apex can do pretty well in northwest flow pattern, so I'll add them to the 2-10 cm (1-4") forecast, though it will be a close call depending on how far south the moisture reaches. 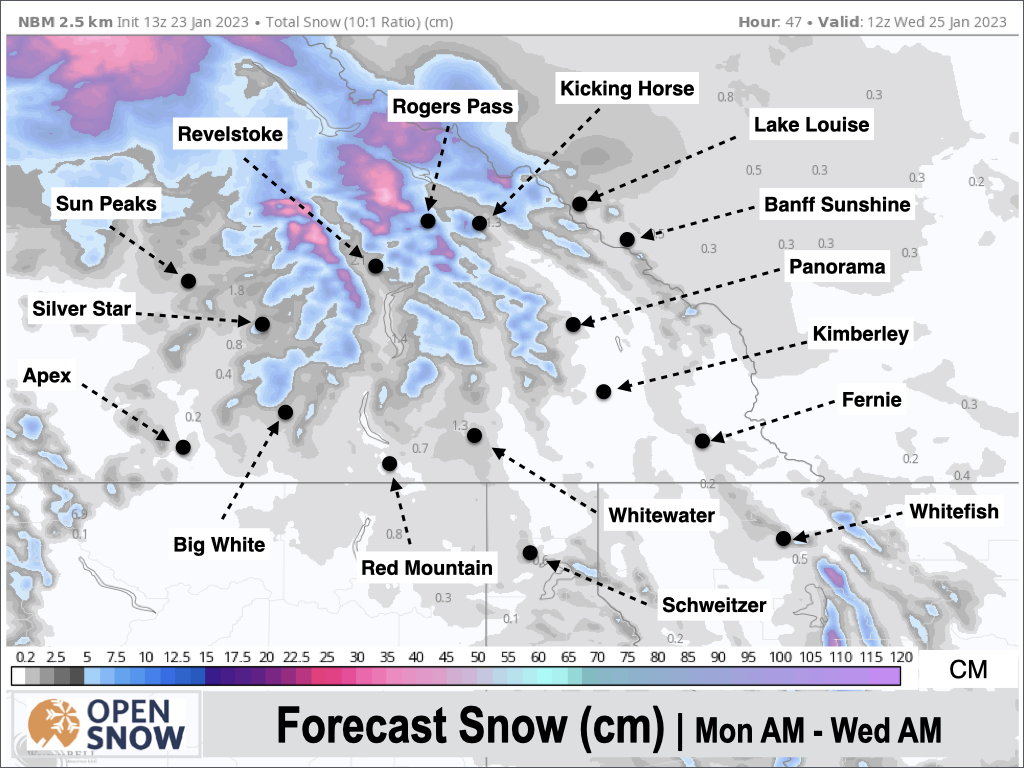 Snow levels will stay below base areas on both Monday and Tuesday and snow quality will be dry and powdery. Winds will also be moderate out of the northwest both days.

However, warm air associated with a strong ridge of high pressure will work its way into Northwest BC on Tuesday. Snow levels will rise to 900-1,200 meters (3-4k feet), resulting in a rain/snow mix at Shames Mountain.

Further east, Powder King will pick up another 10-20 cm (4-8") of snowfall from Monday through Tuesday. 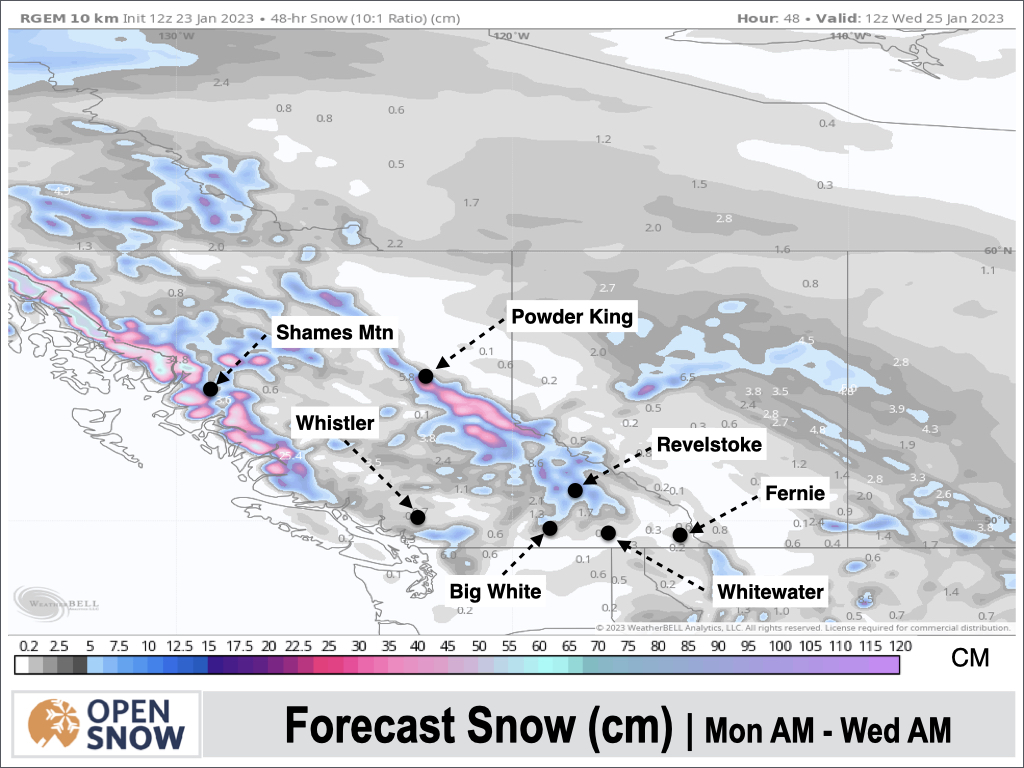 Most areas will see a break in the action on Wednesday aside from some light rain/snow showers at Shames Mountain and light snow showers around Powder King.

A warm-up is also expected to occur on Wednesday under increasing sunshine as highs rise above freezing at mid-mountain resort elevations throughout the Coast Range. The Okanagan region will also see high temps rise to near freezing, while the Powder Highway will see colder air hold in place with highs in the -2º to -5ºC range.

Winds will remain moderately gusty out of the northwest throughout BC on Wednesday, especially over the Interior.

This period is looking more active with three storms expected to impact BC, and with a storm track that will favor Southern BC more so than recent days. The prevailing wind direction will remain out of the west/northwest which will favor the Interior more than the Coast Range as a ridge of high pressure lingers near the coast.

First, a weaker/shorter-lived storm is expected to move through during the day on Thursday, followed by a stronger storm on Thursday night/Friday morning. Temperatures will also be trending colder during these initial waves. 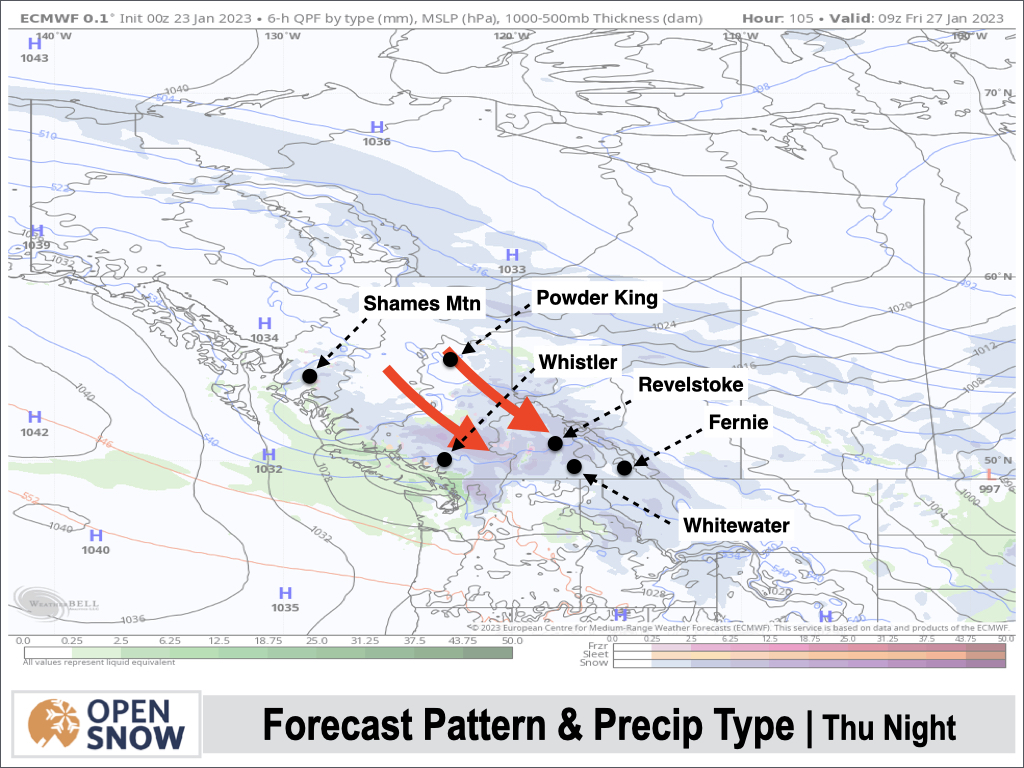 On Friday night/Saturday morning, an arctic cold front is expected to work its way into Southern BC from the north and interact with the jet stream along with Pacific moisture to result in another round of snow.

Exactly where the front stalls and these features interact could act as a focal point for moderate to locally heavy snow. For now, it looks like southern and eastern portions of the Interior (i.e. much of the Powder Highway) will be most favored, but this is far from a certainty. 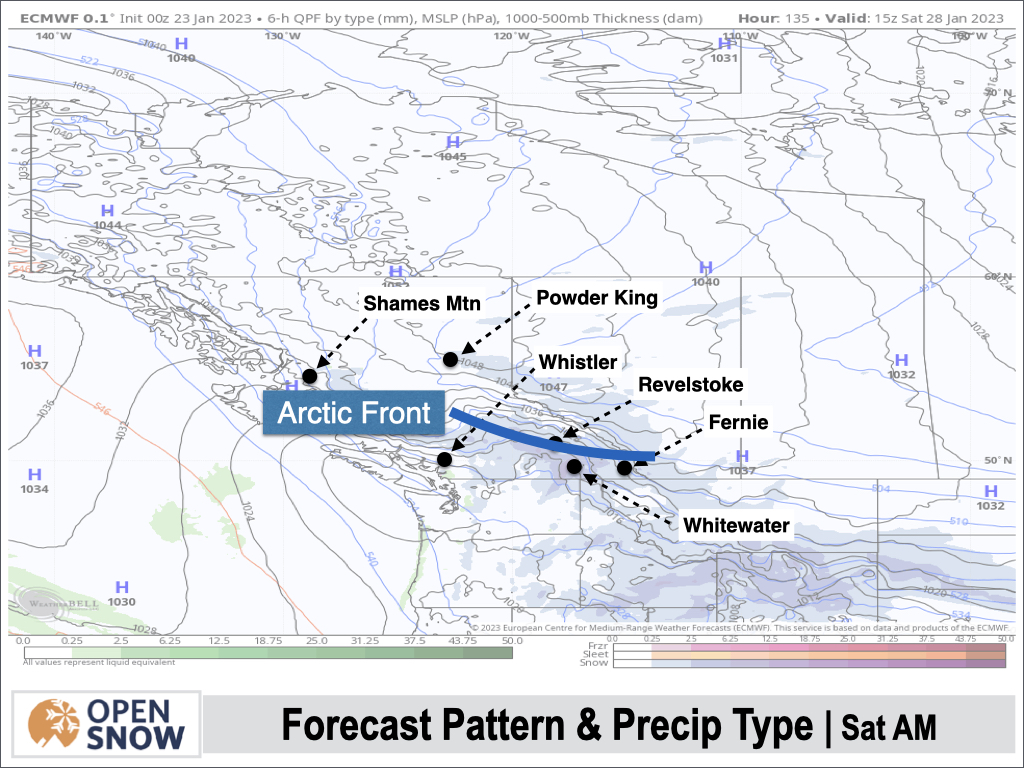 Whistler and the North Shore Mountains are less likely to be favored in this pattern with only light snow expected. However, the eastern slopes of the Coast Range including Manning Park could potentially do well.

We'll get more dialed in on this pattern moving forward, but it's an optimistic setup for much of the Interior to at least see moderate snow totals with Friday and Saturday both offering the potential for fresh powder turns.

We will likely dry out on Sunday (Jan 29th) with cold, arctic air taking hold across most of BC. Snow conditions should remain good across the Interior at least.

It's possible we could see another weak storm arrive from the northwest around Monday (Jan 30th) with arctic air remaining in place.

After that, it looks like we will transition to more of a west/southwest flow during early February as high pressure just off the west coast retreats further west, opening the door back up to more moisture-laden storms.

I suspect the dominant storm track will set up further south across the U.S. but that Southern BC will still see more frequent storms with the potential for decent snowfall over time, especially for areas closest to the U.S. border.

The arctic airmass should also moderate during this pattern heading into early February, but temperatures are also expected to remain below average, which is good news as this should result in snow levels staying low and snow quality remaining good.