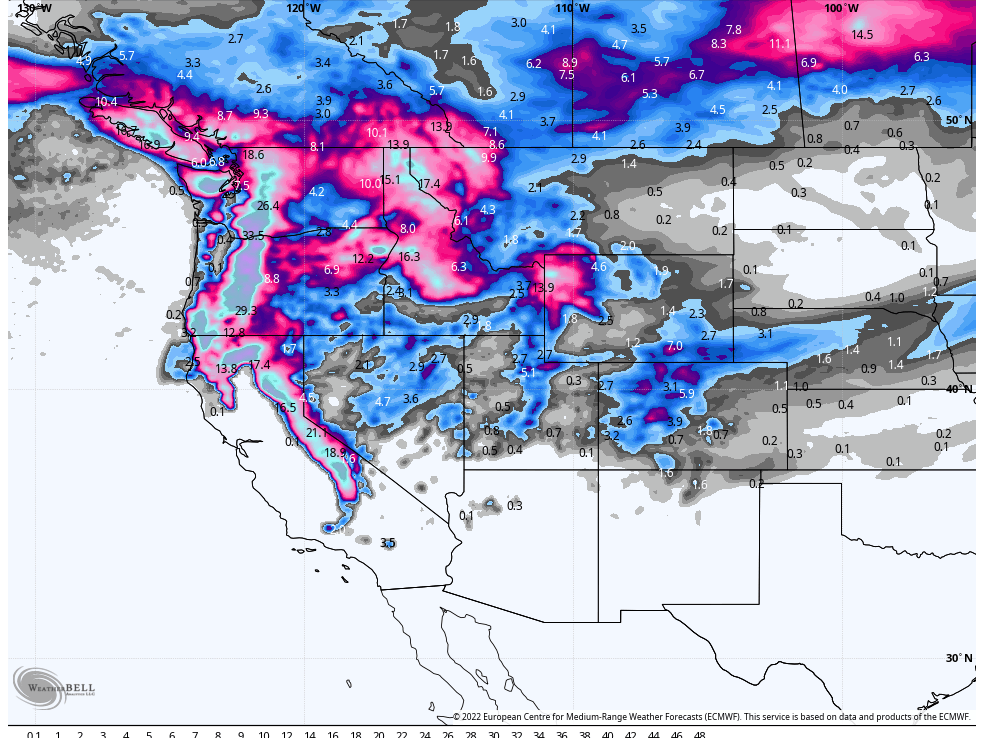 I am on the chase right now and posting a quick update on some very exciting news. Decent storm totals will evolve from the PNW and northern and central Rockies, especially the Tetons, Wasatch Range, and a decent amount of Colorado. Next week gets much deeper for the PNW (Cold Smoke) and perhaps the Sierra. Snorkels might be needed.

Thus far as of Sunday night, the northern Cascades picked up around 15 inches as forecasted (Mt Baker), with areas further south along I-90 and Stevens Pass just now catching up. Puget Sound Convergence zones formed (Explained in my previous post) throughout the day in the central Cascades of Washington. Telemetry is a bit spotty, but my best guess is 10-11 inches at Stevens and upper elevations at Alpental. Short-term resolution models show an additional 3-6 inches Sunday night with less noted at Crystal. The big winner for overnight snow in the PNW will be Oregon. I would aim for Bachelor or perhaps Mt Hood, Timberline for 1st chairs. These areas are likely to see 6-11 inches overnight with some upside totals.  Chase now!

For the rest of the west moisture is moving into the Tetons as of 6 PM Sunday and will continue through Monday morning. My expectation is that Teton Pass, Targhee, and JHMR nab 9-11 inches for turns on Monday. SW flow might favor the pass or areas just east towards JHMR. Winds will be strong Sunday night creating some blowing and drifting but ease for lift openings on Monday, veering a bit more west and NW Monday night. Additional snow showers are noted for Monday night (Cold temps could eke out some decent numbers, but confidence late Monday/Tuesday is low). Total snowfall through Monday might exceed 9-15 inches.  Chase now!

In Utah, the northern mountains grab the highest totals Monday morning near Logan (Beaver) before the action fills in by 2 PM further south. I am not expecting high numbers on Monday, but it's possible that by the last chair some resorts nab 3-6 inches that are favored by SW flow (BCC, Park City, DV wildcard, Snowbasin). On Monday night winds veer NW and snow will continue south of the GSL. Little Cottonwood, the Canyons side of PCMR, and BCC are favored. I would expect an additional 5-10 inches during this period with a possible upside surprise (Storm totals 8-15 inches or more).  Chase for Tuesday morning!

Below: You can see a very cold airmass moving into the Rockies reaching the Tetons late Sunday night and into Colorado by early Tuesday. These temps are at 10K feet and will produce high snow rations (Liquid to snow). Quality will be high.

For Colorado, I see a healthy storm that favors the northern and central mountains. Timing is ripe for late Monday to Tuesday (Please don't groom all the powder overnight) with a wide area of 6-12 inches. Higher amounts are possible near Rabbit Ears Pass, Grand County, northern Boulder County (Eldora wildcard), and Aspen-Gunnison (Elk range). It's impossible to pinpoint who will grab the highest amounts but my best guess will be Aspen, Steamboat, Powderhorn, Copper, Vail, Eldora, and perhaps WP. I have higher confidence in Rocky Mountain National Park. Most of Summit County should perform well but totals along I-70 or north and further west might be a bit deeper. Further south in Colorado a nice band of snow sets up in the northern Gunnison area dropping south to Telluride (4-8 inches). CB is a wildcard with some models showing decent totals. Chase for Tuesday morning.

Below: Decent water totals (Precipitation) through Tuesday mid-morning for the Rockies. With snow rations at 15:1 or higher, it's possible, some areas seeing 3/4 inches of water end up with 10-12 inches and areas with an inch at the 15-18 inch range. The highest totals will be in the Tetons, isolated areas of the Wasatch, and areas north of I-70 (CO), as well as in the western portions of Colorado along or south of I-70. Upsides are possible at early every resort along I-70 including Summit County. 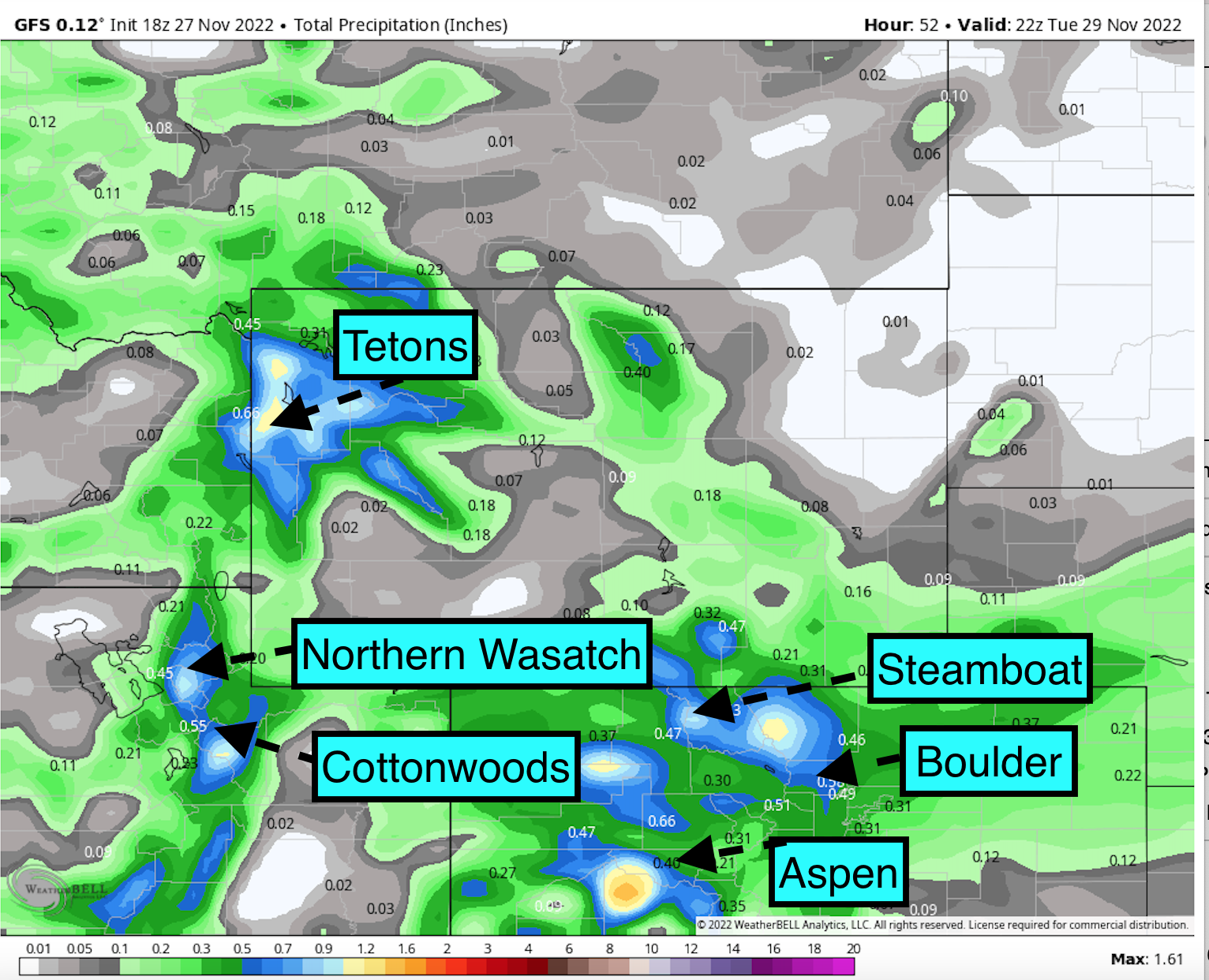 The extended will be deep, with perhaps another 2 feet plus for the Cascade ranges midweek (Whistler will also score decent totals). That system currently has the models dropping decent leftovers into Northern and central Idaho (Sandpoint, Brundage, Tamarack) and some additional snow for the Tetons and Wasatch. The bulk of that storm might take direct aim at the Sierra for Thursday night/Friday (Models are in better agreement currently). There might be some hefty totals from this system mid to late week. I have very high confidence in the Cascade ranges getting crushed. Let's hope the models hold up for the Sierra, unlike the last storm that dried out just a few days before the excitement.

And beyond that mid to late-week storm the ensembles show another potent system dropping into the PNW with 2 different solutions.  Some models show that the system dragging along the coast with less snow inland (PNW, Sierra should still see snow). Another solution is for that system to push a bit further inland (Euro) and produce another 1-2 feet for the PNW, Sierra, and decent totals for the Rockies. The San Juan range is also an area to watch. That system is still 5-6 days out but impacts will be from next weekend to early the following week (December 4-6).

Below: The American model slides a deep low along the coast next weekend and early next week, with perhaps less snow for the inland Rockies but a favored pattern for the Sierra or the 4 corners (I don't have much confidence this far out on what will happen). 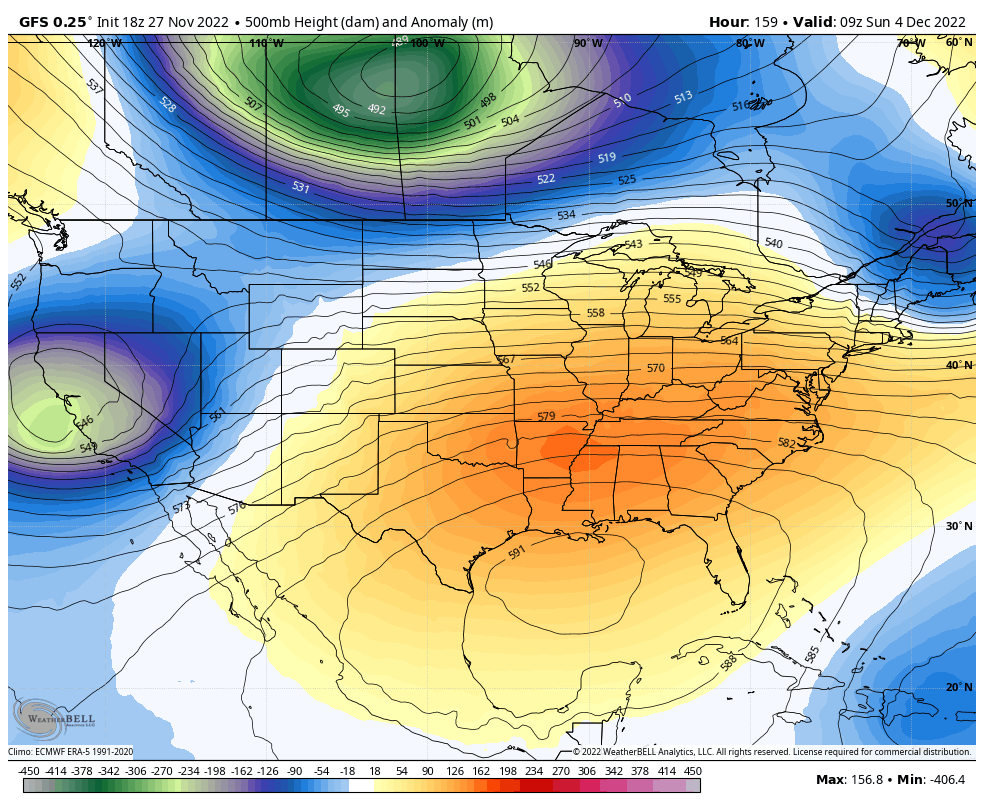 Below: The European model pushes the weekend to early next week's storm (December 3-6) further inland over much of the Rockies, PNW, and Sierra. 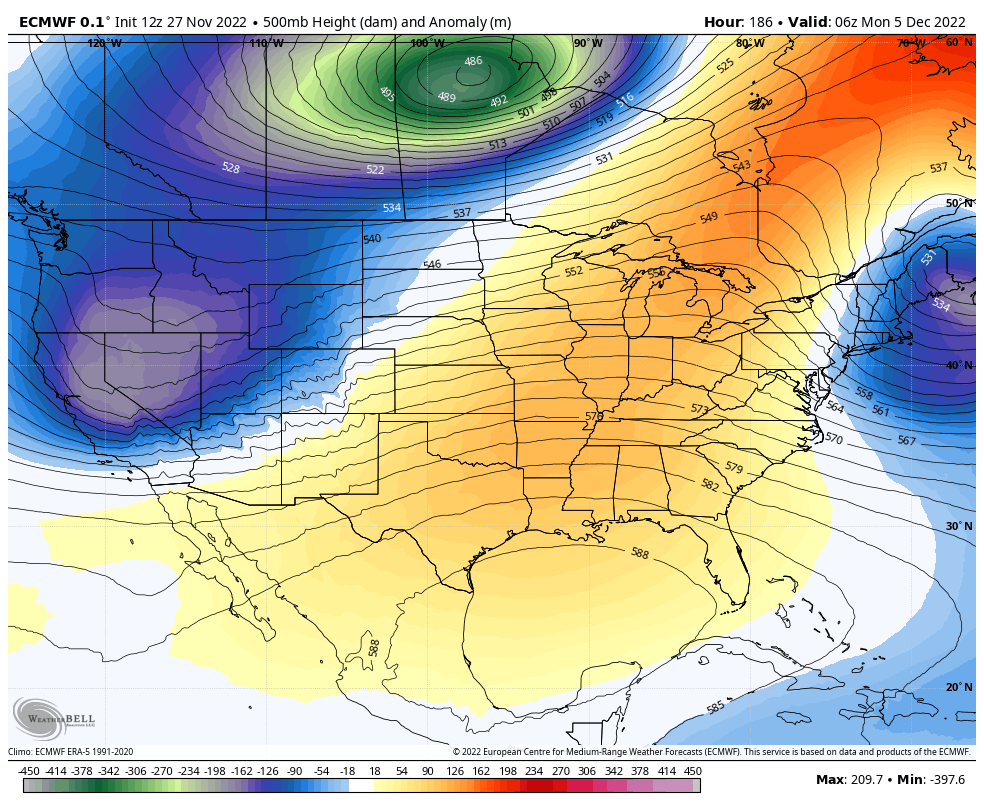 See you on the first chair Monday!