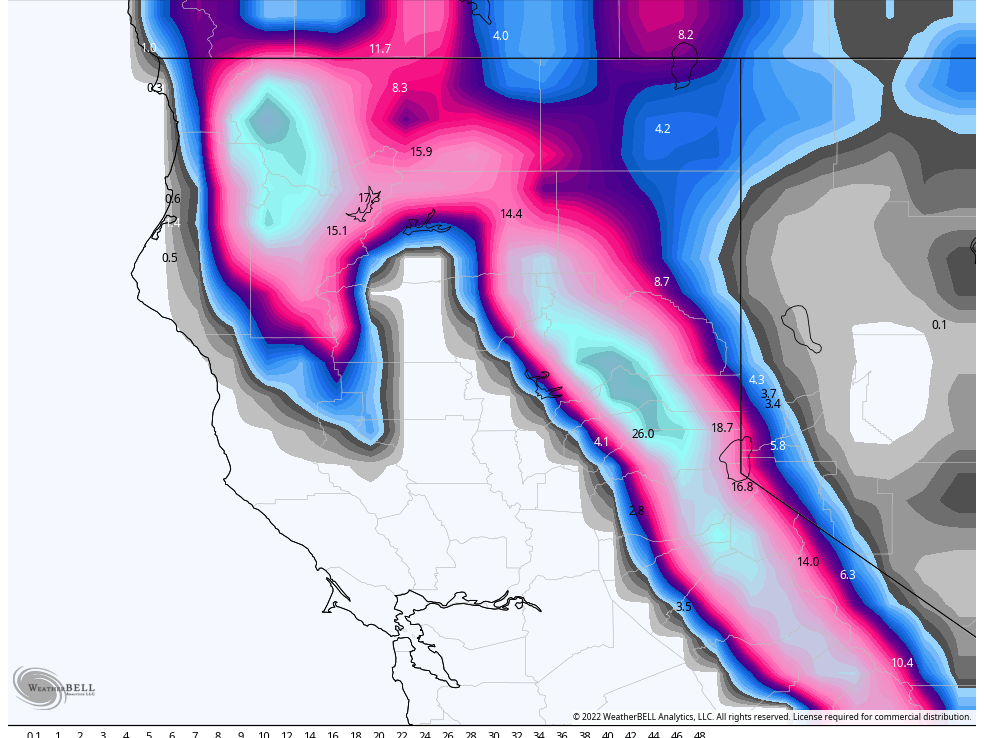 The snow delivered big numbers for the PNW for Wednesday morning. That system is moving into Idaho currently and will deliver decent numbers for the Tetons and Wasatch by late Thursday/Friday. The Sierra is going to get nailed with 2 storms. Keep the chase going!

During the chase Tuesday night (From Utah to Washington), the big decision was to stay south and ride Crystal or head north for Baker (Stevens opens Friday). Do to delayed flights we stayed near Seattle and chased at Crystal. Winds were gusting to 70MPH at the ridges Tuesday night (Telemetry). Crystal reported 15 inches on Wednesday with Baker near 18-19. Stevens and Snoqualmie Pass were even deeper and appear to have 20-25 inches from this storm! Rumors are that there might be some early openings at Snoqualmie. Stevens opens Friday. Crystal rode bottomless on Wednesday with northern aspects well covered, fluffy, hero snow and relatively light crowds. Southern aspects at lower or mid elevations still need 1 more deep storm to fill in. 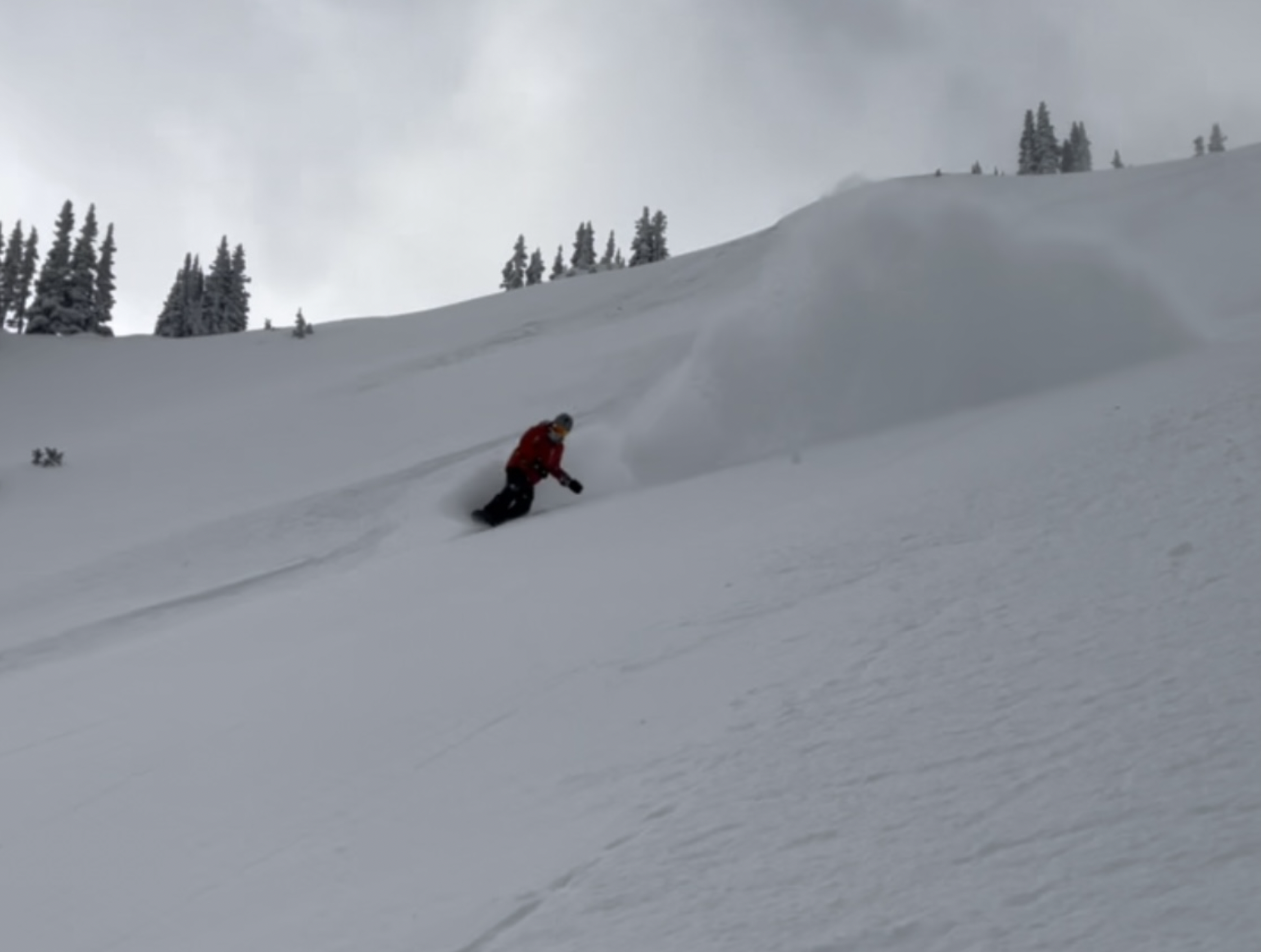 The chase ahead looks deep for central Idaho (Tamarack, Brundage) extending south into Stanley and perhaps the Galena Summit and Sun Valley. Amounts should exceed 9-16 inches by late Thursday. Other deep spots to chase powder will be the Oregon Cascades with my pick over Bachelor who should see the brunt of deep powder for early tracks Thursday (12-14) Further north in Oregon will see a bit less, and for Washington even less with the exception of White Pass (3-7) and perhaps Crystal (2-5). Bottom Line: For Thursday the deepest reports will be in Idaho, followed by the central Oregon Cascade Range near Bachelor. Quality will be high. Chase for Thursday morning.

For California  snow will begin late Wednesday night in the northern areas of California (Oregon border), and continue into Friday morning. Peak snow for the Sierra range will be Thursday morning (Daylight) through late PM or early Friday. Expect high winds on Thursday initially, with snow levels dropping late PM and early Friday. On Thursday morning you might see enough snow in the northern lake areas (Donner summit) to chase with additional freshies building (Storm ski). Friday will be the better day to chase for openings and less wind.

Here are some expected totals from our OpenSnow Forecaster Bryan Allegretto (Tahoe OpenSnow). 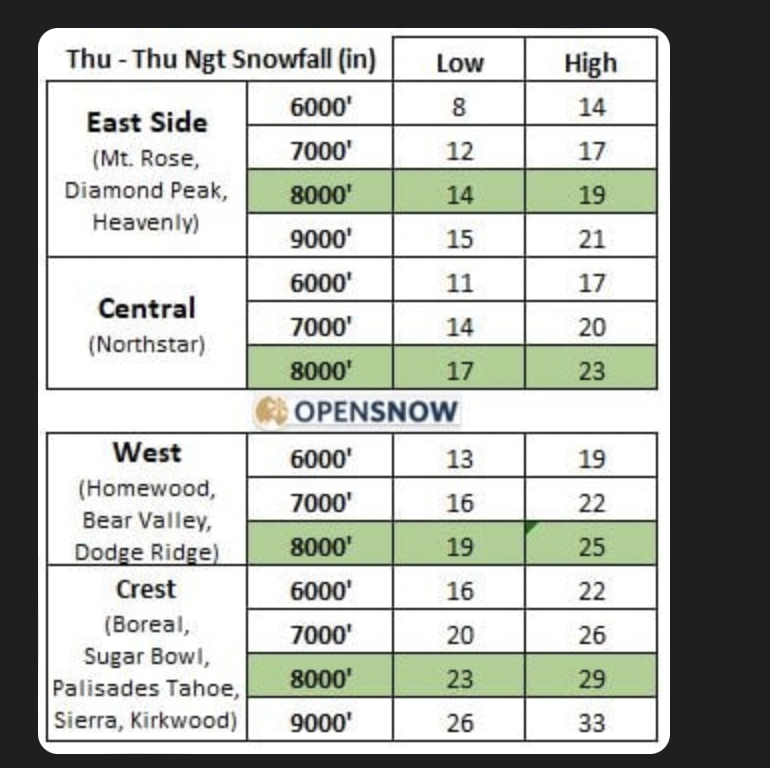 The next chase for the west, takes aim on the Tetons and Wasatch. Snow from central Idaho Thursday slides into the Teton range by late AM. Last chair Thursday might be decent (3-7) for JHMR or Targhee (JHMR favored in this S, SW wind direction). Additional moderate snow will fall Thursday night, so Friday will be an even deeper day. The models are showing storm totals from 8-15 inches (Euro pushes things further towards Yellowstone with the GFS centered over the Tetons). The NAM is also a bit north. Bottom Line Wyoming: This should be a decent storm split between day snow Thursday and overnight snow for Friday. The models are showing a bit of uncertainty with a range from 7-15 inches or more. Ride late Thursday or early Friday. Montana stays north of the deepest action with 2-5 inches likely for Big Sky.

Below: Total snowfall will be higher than these numbers suggest with good snow ratios (Cold temps). You can see that central Idaho, panhandle, northern areas near Sandpoint, and northern Wyoming are favored for some decent totals through Thursday night or Friday morning. The Tetons sit on the southern end of the highest moisture but will still do well. 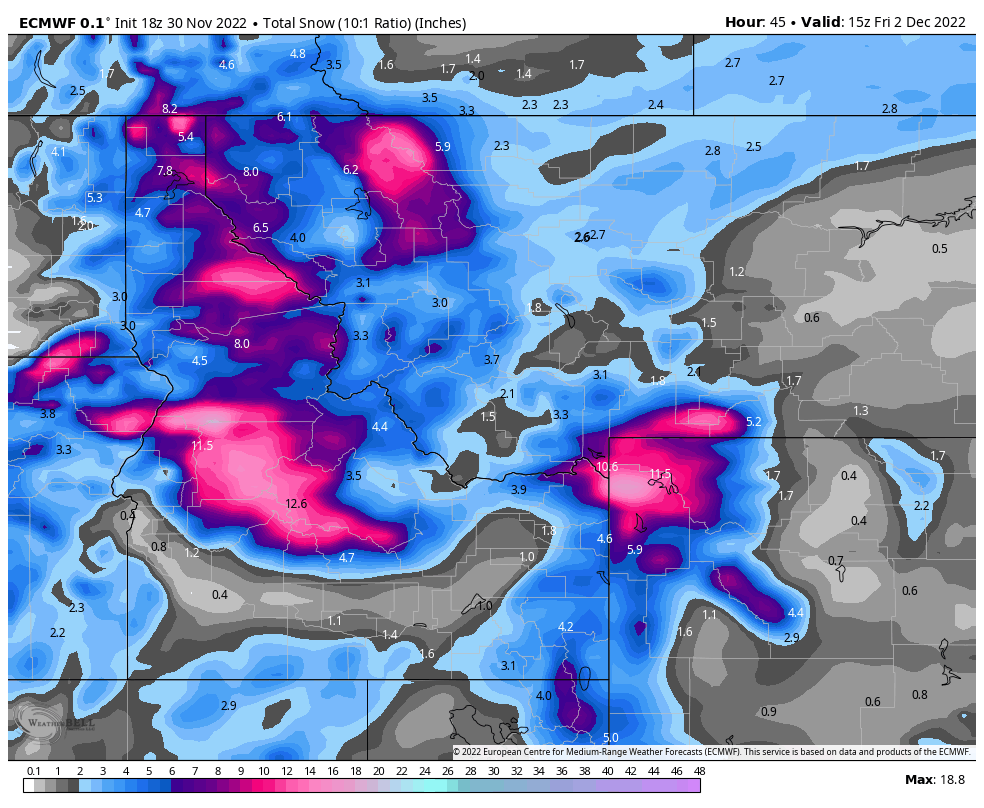 In Utah, primarily overnight snow Thursday to Friday should bring 8-14 inches to many areas. Strong S, SW winds Thursday will ease for Friday and shift to the NW.  Park City or Deer Valley look good on the models (Can do well with S- SW flow) initially. I am running with 6-12 inches for PCMR, DV, Snowbasin, Beaver and 9-14 inches for the Cottonwoods by Friday morning. BCC could over perform initially with the southerly flow. Bottom Line Utah: Good storm timing (Thursday night), wide range of solutions on totals, likely impacting most mountain ranges from Provo (Sundance) to Beaver Mountain (Far north). The Cottonwoods won't be the only places to look for powder on Friday, hence the crowds. Ride Friday and look for new terrain openings Saturday.

Below: Total water in Utah through early Friday (Next storm moves in Thursday PM). 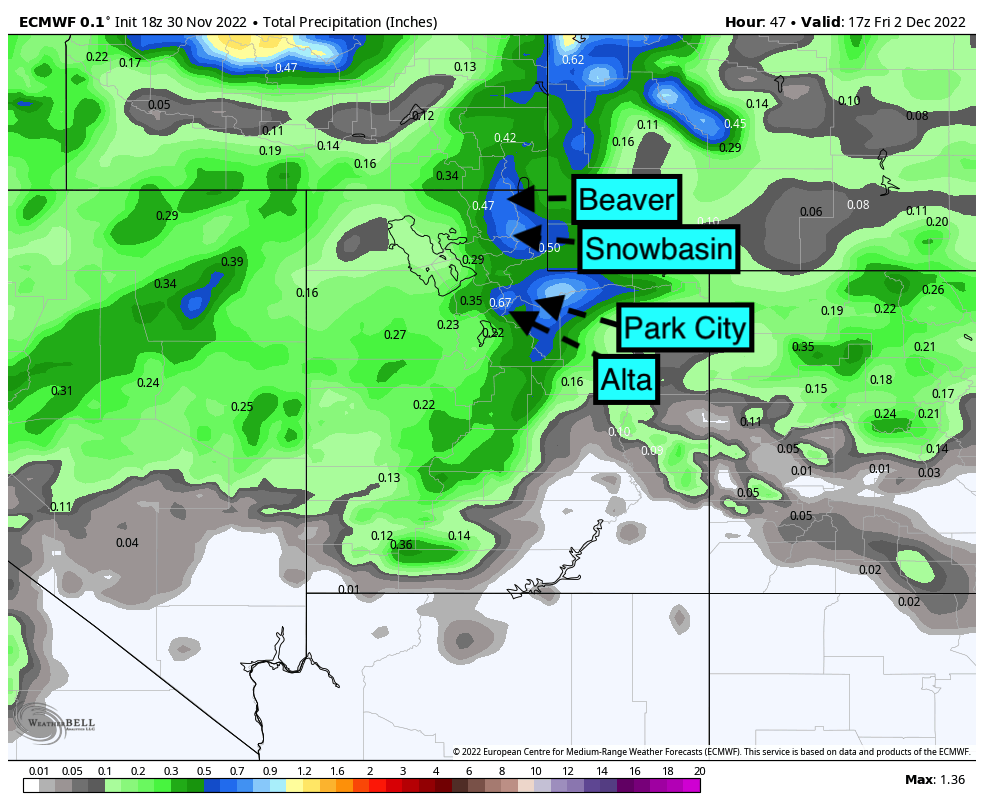 Colorado grabs 4-7 inches Friday morning (Midnight) to Friday evening. Moisture seems to stay a bit lighter along I-70 into Summit County, and a bit higher near Steamboat extending south to Aspen or Crested Butte. S, SW flow initially is not ideal for the I-70 corridor, however, winds shift to the NW on the backside of this system on Friday late AM pushing more moisture east towards Vail Pass, Beaver Creek and perhaps Summit County. The Central mountains of Colorado (CB, Aspen, with Steamboat sneaking up some SW flow will end up with higher amounts. This will be a moderate storm.

Another decent storm is likely for the Sierra Saturday night into Sunday that might overspread the Rockies early next week. There is some inconsistencies in the models once that storm exits the Sierra (Might take a track over the 4 corners). Some of that moisture is likely to overspread the Wasatch range and much of Colorado. I am not digging into details tonight being in chase mode. Highest confidence currently is with the Sierra.

Enjoy the powder everyone! See you on first chair again Thursday.