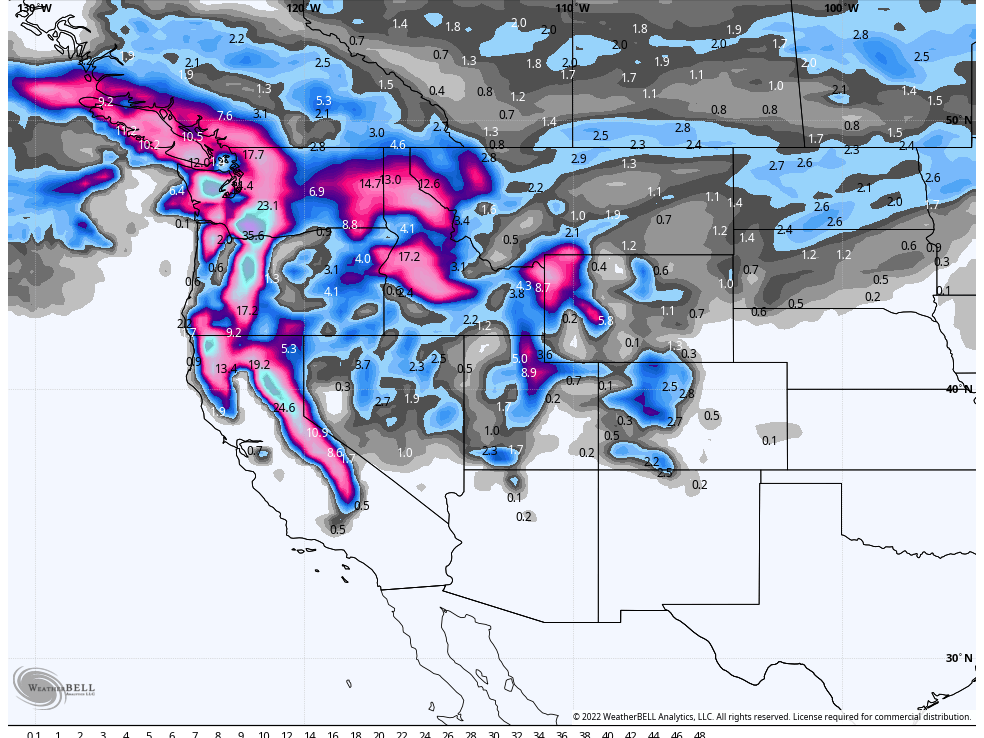 Epic November/early December POW continues! It will only get deeper and deeper. California and the PNW are getting pitted Wednesday (PNW) and late Thursday (Cali). The Rockies score great leftovers late this Thursday to Friday.

Where do I start? November is going out with a bang with my chase from Targhee Monday to Snowbird Tuesday. The Wasatch scored storm totals near 18 inches (In line with my forecast for the Cottonwoods), with higher-than-expected totals at Park City (16 inches). I caught 1st tram with Luke Stone (OpenSnow Europe forecast-new this season).

Below: Snowbird -Opening of the mid-cirque on Tuesday. Photo: @powderchasersteve via Instagram 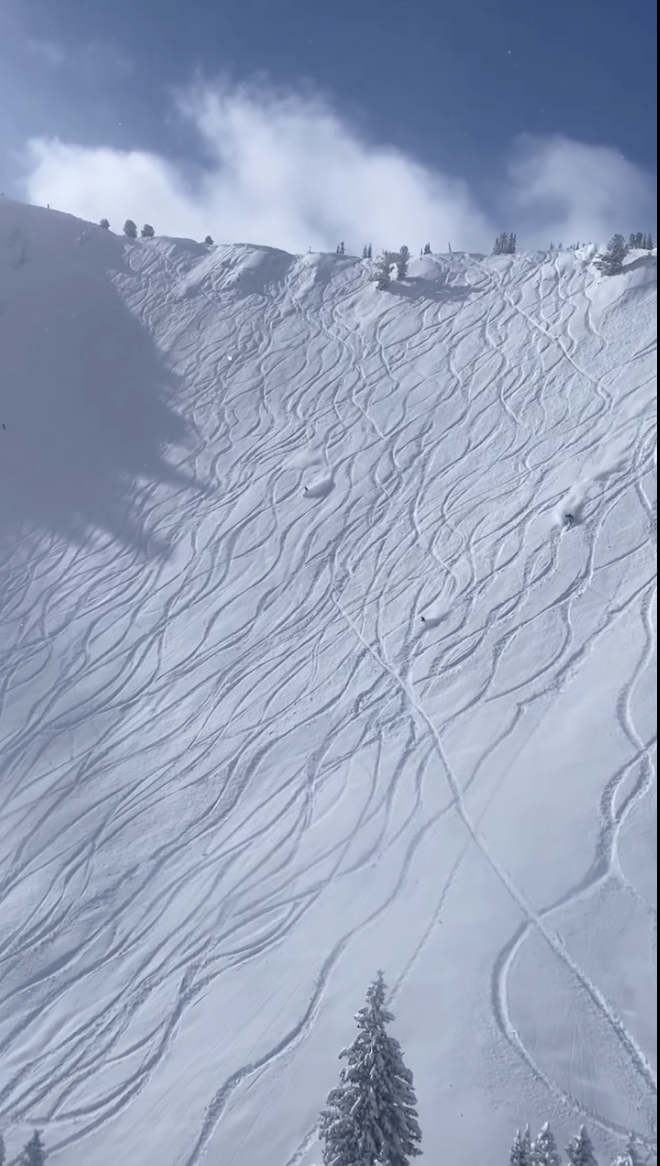 Conditions were epic at Snowbird, especially for November with bottomless pow, a bit deeper at lower elevations with just a bit bit of wind impaction or less deep up top. That's nearly 28 inches for me in 2 days (Targhee to Snowbird).

in my Colorado forecast, I mentioned highlights at Crested Butte, Aspen, Steamboat, and RMNP that all scored decent numbers. I had WP and Eldora on wildcard lists, that underperformed. The models showed heavy snow for areas near Aspen and south toward the Gunnison Valley. My forecast on Tuesday was for up to 15 inches in some spots. (Previous forecast- "Total snowfall for Colorado through Tuesday morning favoring areas along the I-70 corridor, especially north to Steamboat, RMNP, south to Snowmass/Aspen, and CB)

Crested Butte is the likely winner with an epic dump of what appears to be over 20 inches. That exceeded my expectation.

Below: Webcam on Tuesday morning at CB. Another 5 inches fell on Tuesday on top of this! That is exactly the dump they were looking for.

Where to chase in the next 5 days? You could score 4-6 feet this week or more!

PNW: The short answer is "there are many options". The deepest options are likely going to land in the PNW for Wednesday where models show 12-24 inches and very cold temps. There is snow likely for the foothills outside of Seattle (the Snow level will be near 500 feet). S, SW flow might favor Crystal or White Pass on Wednesday, however, all areas from Mt Baker through to most of the Oregon Cascades will score deep snow. Coastal Canada, Whistler, grab 30 CM plus, with a bit less inland. Bottom Line: Deep powder for Wednesday for the PNW with some snow lingering into Thursday, especially in Oregon. High Quality! Blower alert! Ride Wednesday.

Below: High confidence, HRR model showing epic amounts of snow for western BC, PNW (WA and OR), and decent amounts further inland (East Cascades) for Tuesday night to Wednesday PM. Chase now! It might be too late if you are just reading this. 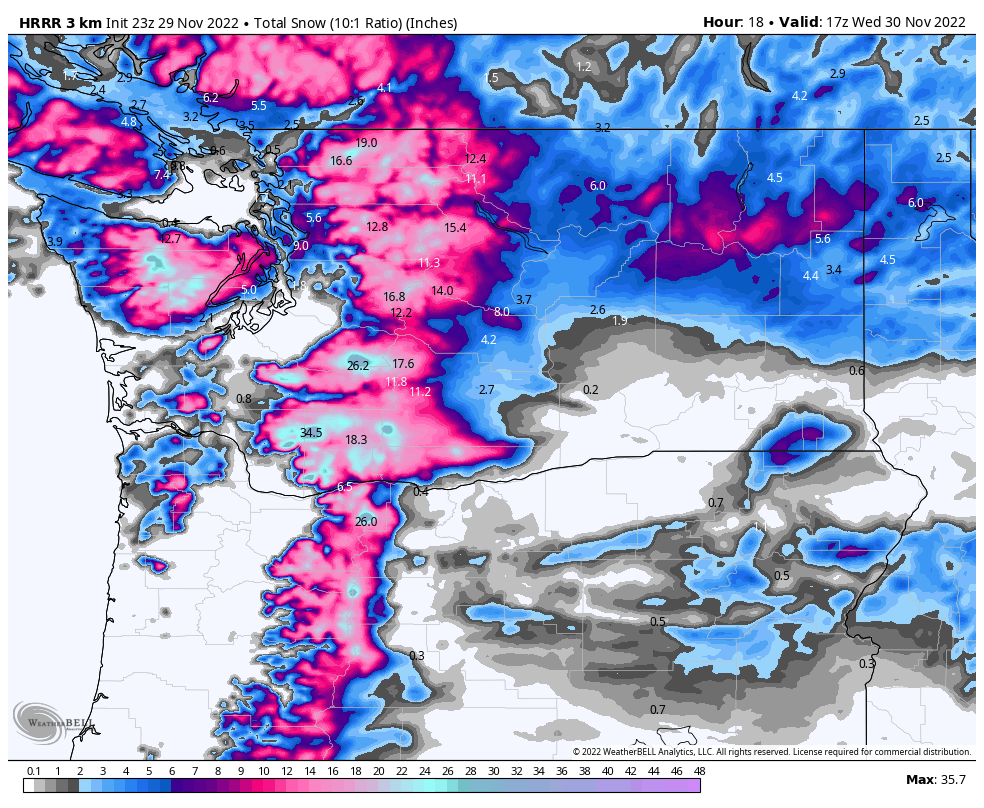 Below: Healthy and decent consensus (Tight lines) for 20 plus inches for Crystal Mountain peaking late Tuesday to Wednesday. 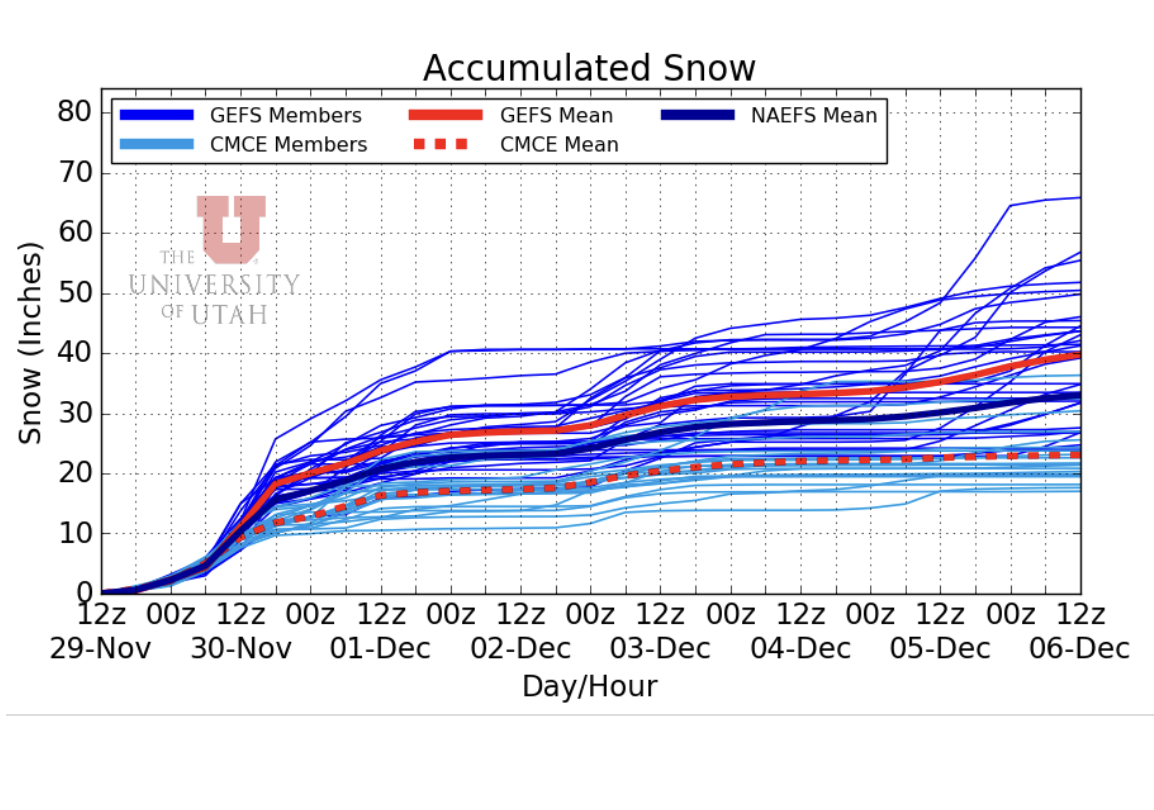 Sierra: Equally as deep or deeper, will be the Sierra range for Thursday to Friday (Chase to Shasta perhaps Thursday morning and head south towards the lake by noon Thursday. Then chase to Mammoth for late Thursday or Friday) The Sierra range will be grabbing up to 2 inches of water Thursday/Friday with 2 foot or more reports by early Friday. Bottom Line: Snow levels drop to 2,000 feet Thursday afternoon. Snow begins late Wednesday night and peaks during the morning hours Thursday. Storm ski Thursday and grab new openings on Friday. Snow showers continue Thursday night favoring the southern lake or Mammoth.

Below: Good model consensus for 2 feet or higher totals for the Sierra this Thursday-Friday. 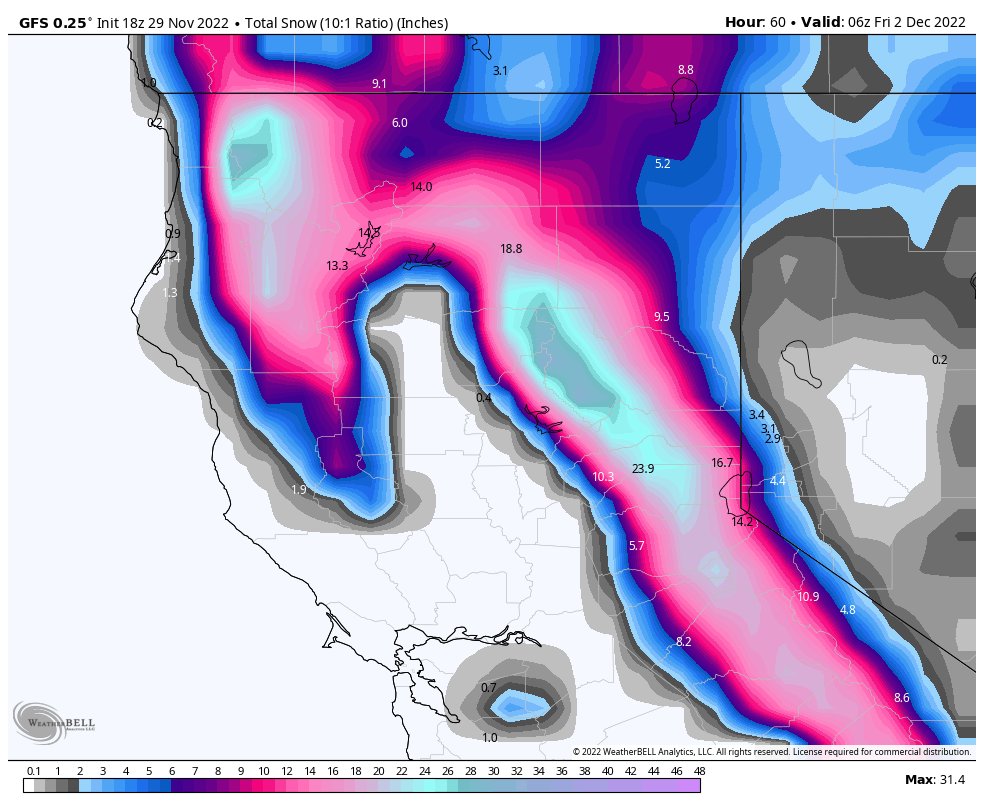 Rockies: Honorary chase options in the Rockies:  Idaho will benefit nicely from this system with 20 inches possible for areas from Sun Valley, and north to the McCall area (Central Idaho) primarily for a Thursday chase. Snow moves east into the Tetons, Wasatch, and Colorado late Thursday to Friday. Currently, the Tetons and northern Utah are likely to grab 9-12 inches with Colorado slightly less. Bottom Line: Snorkel Alert for Idaho resorts, especially southern and central regions (20 inches), with 9-12 inches further east in Wyoming, Utah, and Colorado. The Euro shows heavy snow for the northern tip of Utah near Beaver Mountain which was skunked on the last storm and a bit less snow for the central Wasatch.

Below: 10K temps with a good cold front late this week overspreading the PNW on Wednesday and the Sierra on Thursday.  Great snow quality. That front will eventually reach Utah and Colorado on Friday with cold temps and snow. 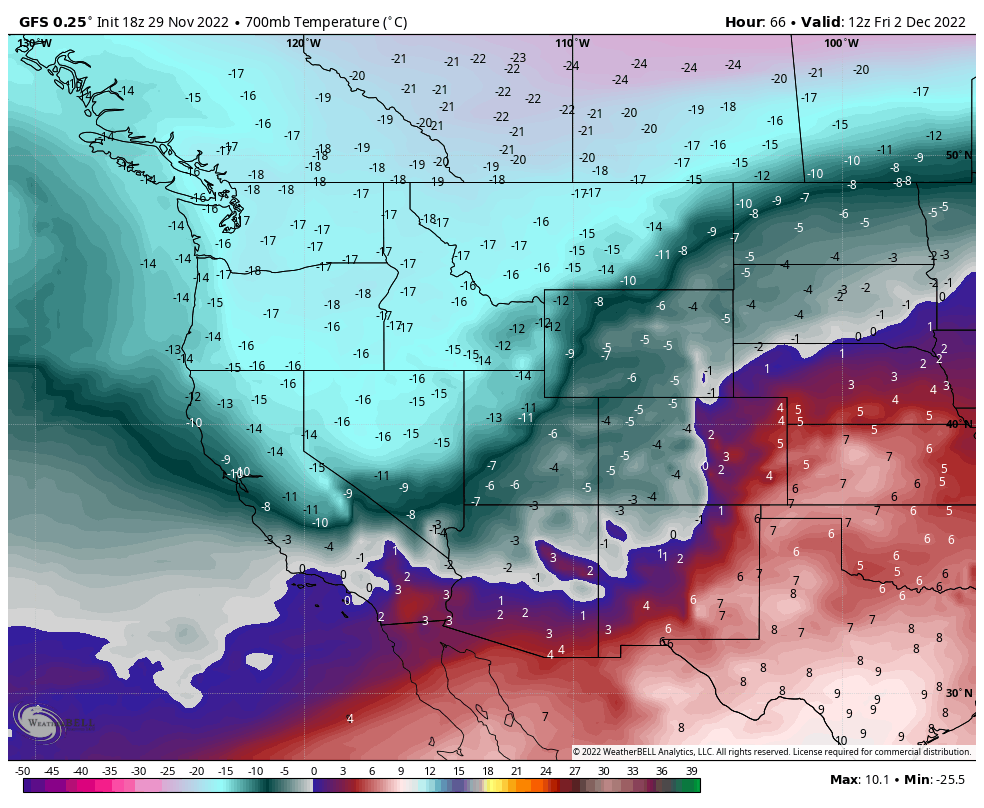 Below: Central Idaho will be deep Thursday, including Sun Valley which often sees big storms or famine. Wyoming wildcard for decent snow for Friday with some models pushing the heaviest totals toward the northern end of Teton National Park or the border with Montana. Friday could be a decent powder day with JHMR or the Pass favored with this wind direction (S, SW). Big Sky is a wildcard. 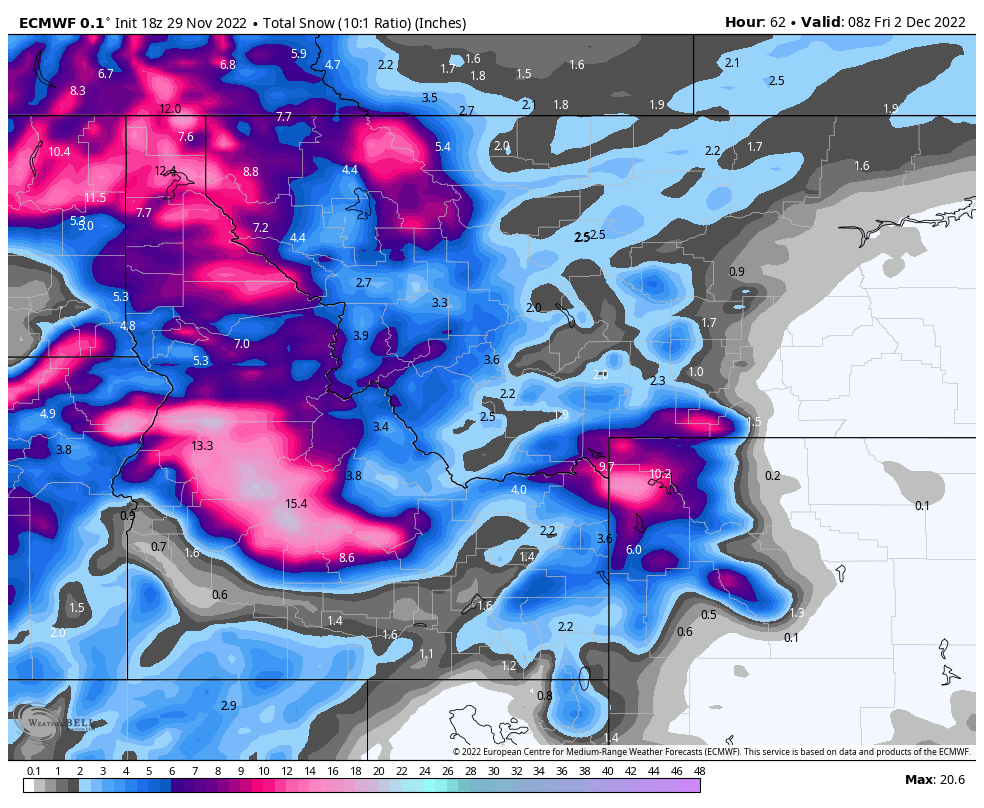 There is a 3rd system taking shape for late this weekend which will likely bring another foot or more to the Sierra and modest amounts in the PNW (Southern regions favored), overspreading the Rockies with a decent event by Monday, December 5th to December 6th.  More on that in a future chase post.

Below: University of Utah ensemble averages show decent totals for the Tetons this week peaking on Friday.  These maps tend to be a bit overdone but it's reasonable to forecast 5-day totals in the 2-foot plus range, especially for the mid and upper elevations of JHMR or Teton Pass that will be favored. These ensemble plots are not that concise leading to a bit of uncertainty, but high confidence in a decent event. 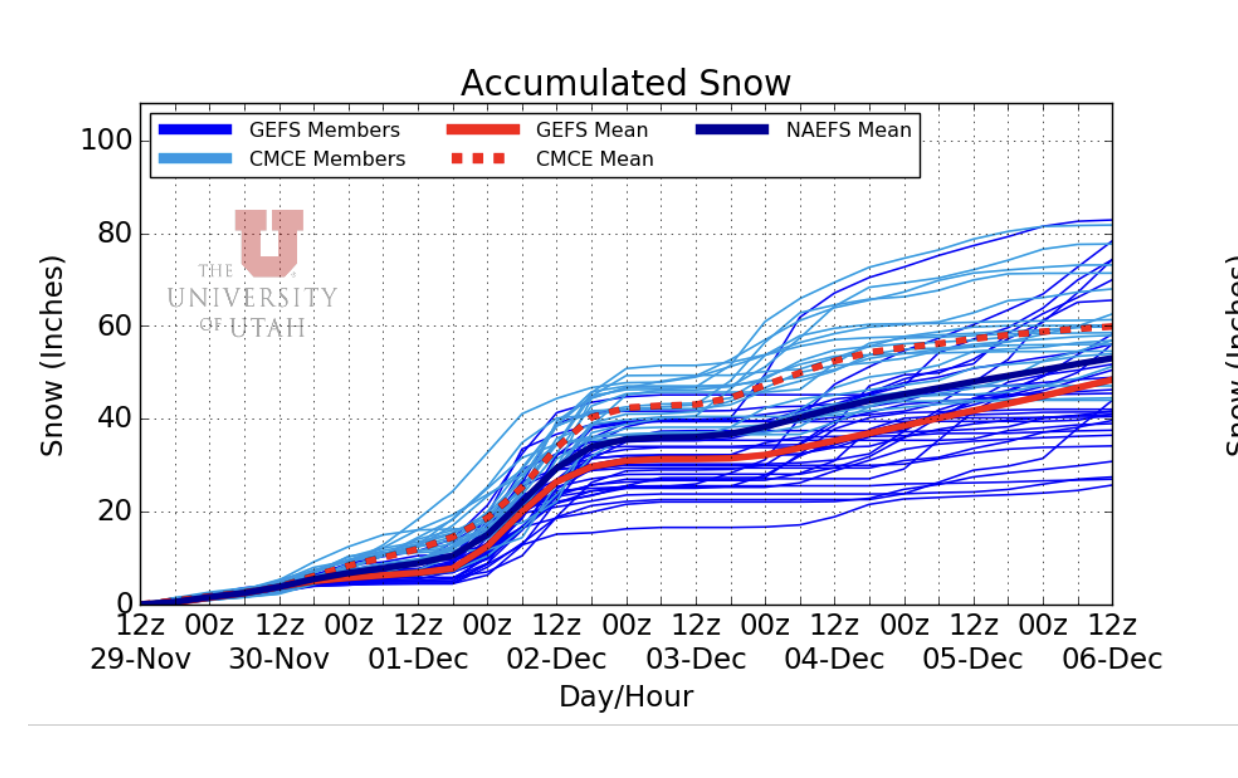 Conclusion: Chase this week! Highlights for the deepest totals- PNW, Coastal BC, Sierra, Central Idaho. Best wildcard picks- Tetons, Wasatch Friday (Still a bit of discrepancy). The next storm moves into the PNW and Sierra for the weekend and will impact areas of the Rockies by December 4th or 5th. This could be a decent event. High pressure is possible by December 7th with storminess possible by late that weekend December 10th or 11.  It's too far out to forecast with confidence.

See you on the first chair Wednesday!