Friday brings an end to the snow, dry and warm weather ahead

Snow totals between Tuesday and Friday morning were as high as 18 inches and most mountains saw at least a few inches during the storm. The last flakes will exit the northern mountains on Friday evening and then we'll go back into a mostly dry and mostly warm weather pattern through mid-to-late September.

It's now Friday morning and after spending most of the week influencing our weather, the storm is finally beginning to move away from Colorado.

The radar animation on Friday morning shows a few showers lingering over the northern mountains and this will be the final act from the storm before it moves off to the east.

Below are a few notes about snow totals from this storm.

Monarch received 18" at the base and maybe a little less at the top of the mountain. An east wind often favors more snow farther to the east so the "a bit less snow at the top" is just an estimate on my end. The 18-inch total was more than expected though we did go into the storm thinking that areas like Monarch, which can be favored with an east wind because they are near and just east of the divide, could do well.

Wolf Creek received 13-15" inches. This was a little less than hoped for as some of the high-resolution models thought that one of the bands of snow would stall over the mountain and provide deeper totals. But this is still a good haul for an early September storm.

The Aspen and Crested Butte area in the central mountains received 8-10". This was more than expected and was due to an intense band of snow moving over the area on Tuesday afternoon.

The area around Cameron Pass in the northern mountains may have received 8-10" (estimated based on SNOTEL) with a lot of that snow falling on Thursday night into Friday morning (now) as the last piece of the storm pushes across the northern mountains. This moisture is excellent news for the Cameron Peak fire, though my non-expert fire opinion is that even with this moisture, the fire is far from "out".

Here's another view of the storm now on Friday morning. It's a visible satellite image and it shows that clouds are still covering most mountain areas while the sun has returned over the eastern plains. 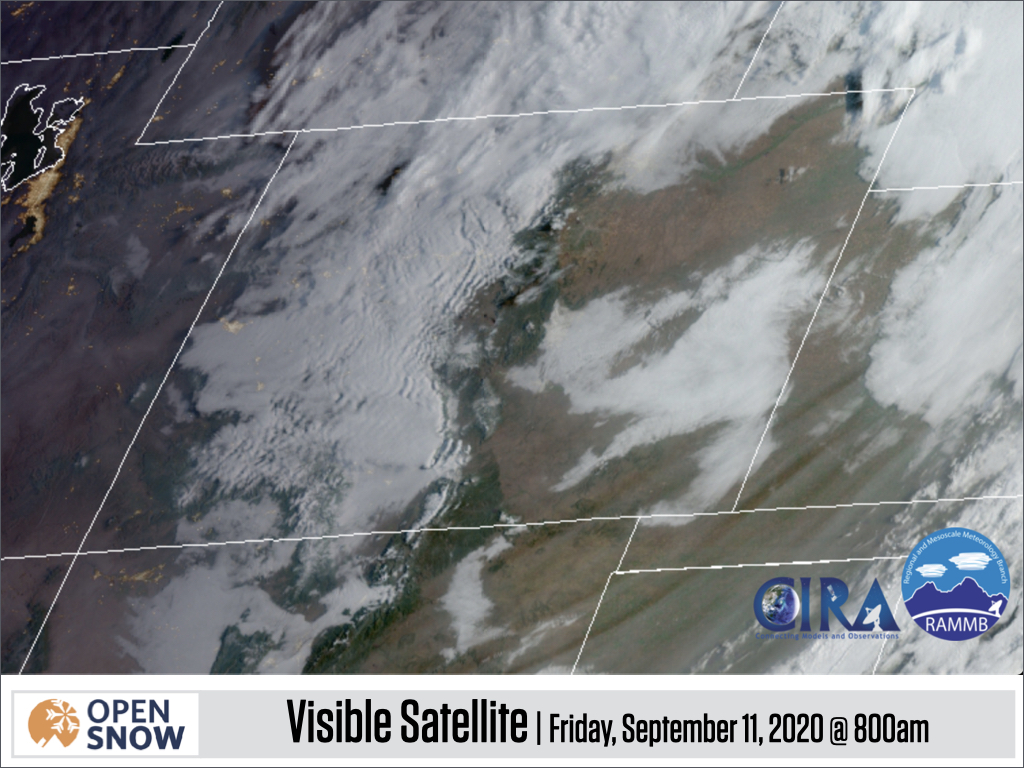 Friday's weather should stay cloudy for most mountains through at least the middle of the day, then there could be some clearing and sunshine by the afternoon and evening. Any remaining snow accumulations should be limited to the far northern mountains.

For precipitation, from Saturday onward we'll see a return to dry weather.

PS – Since we're going back to weather that'll feel like summer, I'll just leave this here to get us all stoked for the season – it's some (legitimate-looking) turns from this past storm. Check out this video on Instagram from Aspen local Colter Hinchliffe.