We might avoid the smoke, next cool down on Sunday Sep 20th

Last week's snow was fun, and now there is no additional cold air and precipitation in our immediate future. The focus of this week's forecast will be on the smoke from west-coast fires and if we can avoid it. And coming up, the only hint of fun future weather will be a chance for a side-swiping weak storm around Sunday, September 20th.

What a treat it was to receive up to 15-18 inches from last week's snowstorm. Most of the snow has already melted, though some is still clinging to shaded north aspects.

Over the weekend, the visible satellite image on Saturday morning captured a beautiful scene with clear skies, no smoke over Colorado, and white snow cover over the higher peaks all the way from the northern Colorado border to the southern Colorado border. 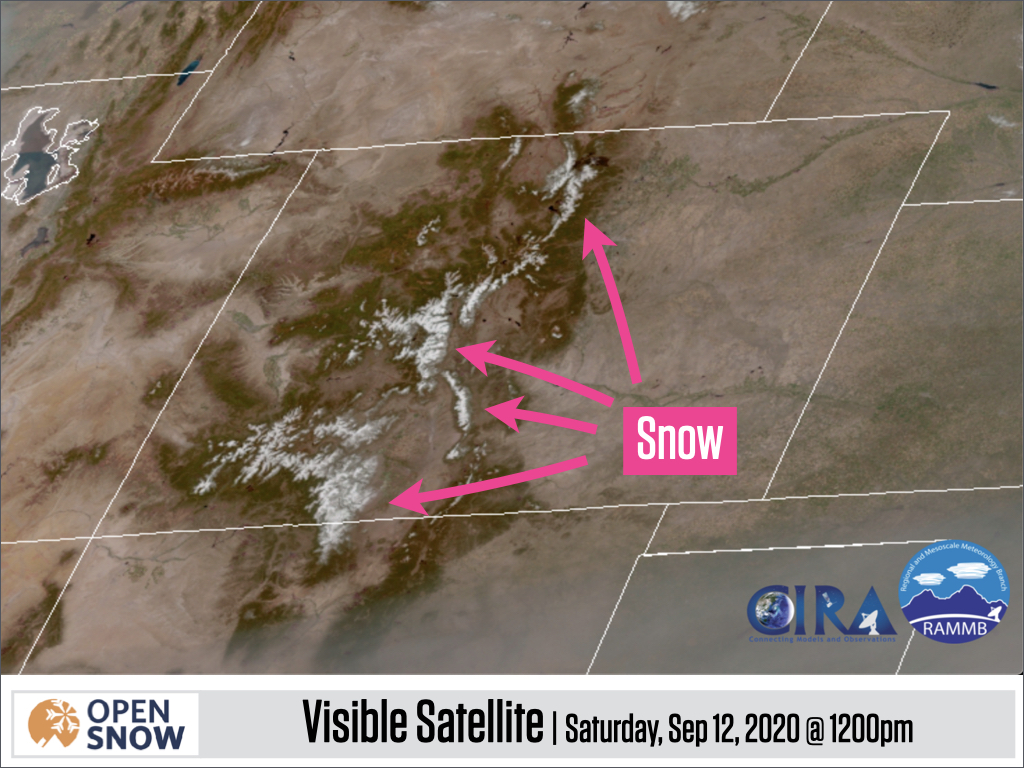 Also over the weekend, we were very lucky here in Colorado to not see smoke from the west-coast fires. 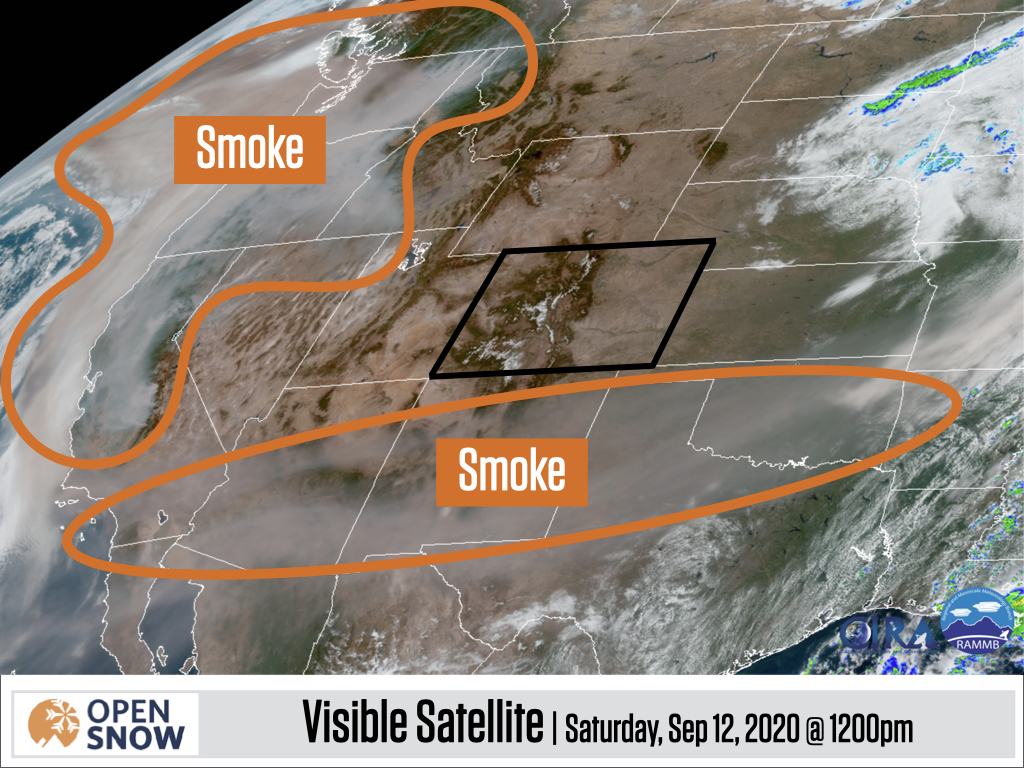 Now on Monday (Sep 14) as I write this, the sun angle is still a little too low for the visible satellite to show the smoke, so I will use the smoke forecast from our OpenSummit.com service (included free with OpenSnow All-Access or only $19/yr for both!). 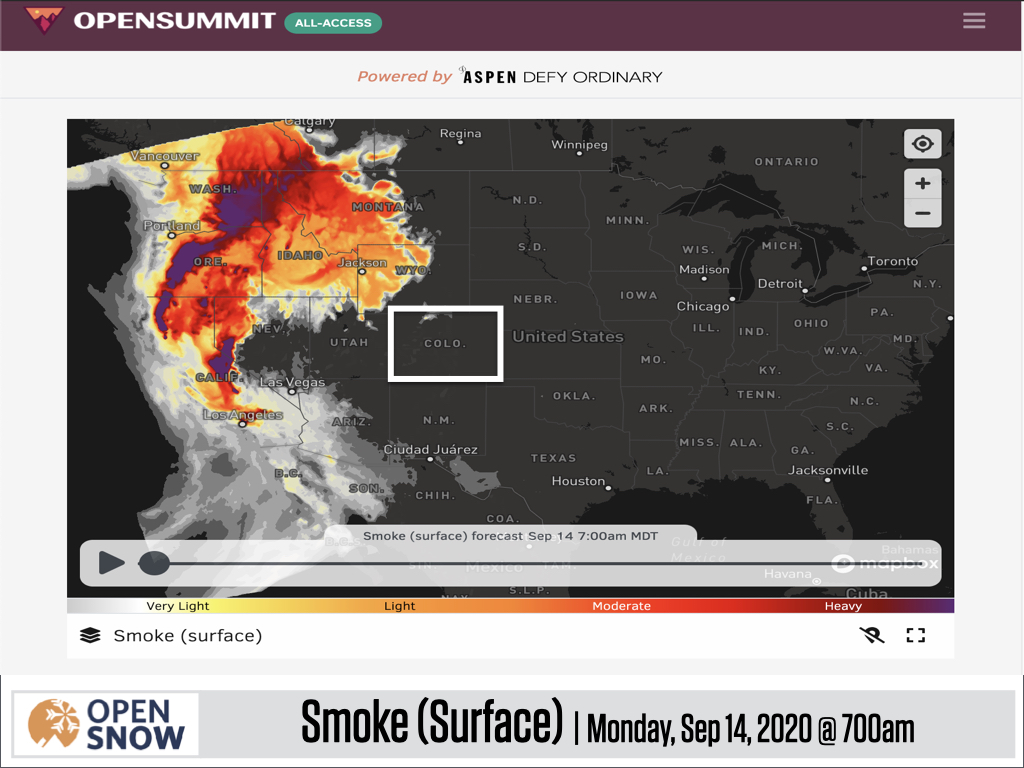 But the smoke in the sky that can lessen visibility is very close and just entering northern Colorado. 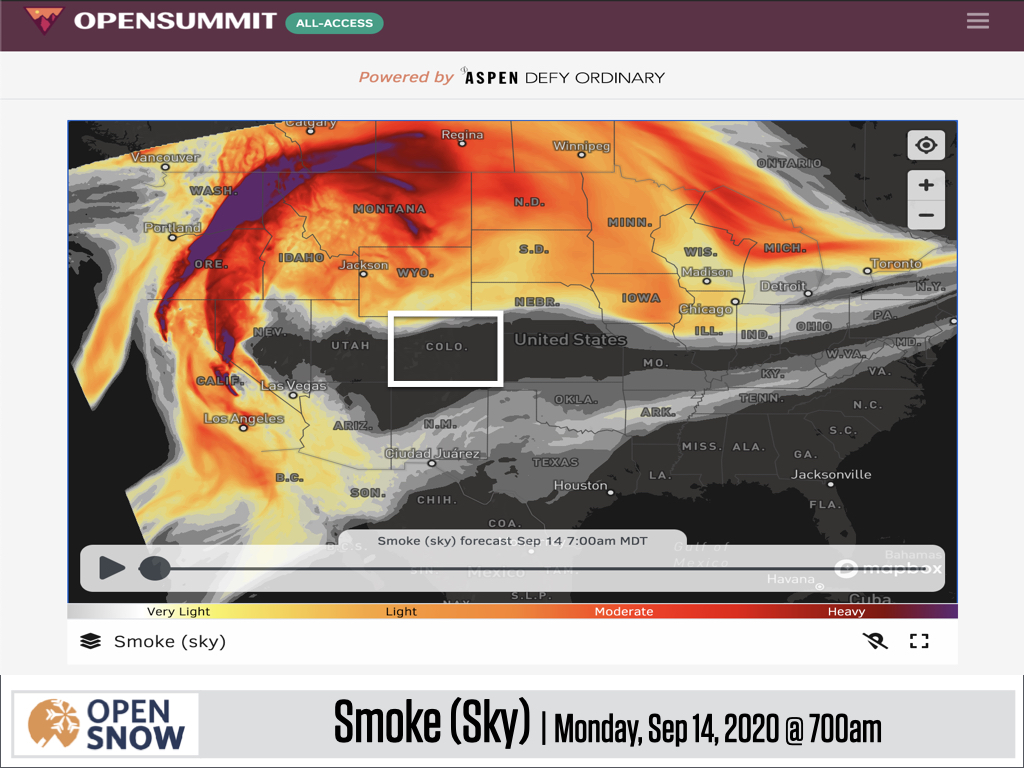 Based on the forecast maps on OpenSummit, it looks like most of Colorado will stay mostly free from the west-coast fire smoke on Monday. But will it last?

The forecast weather pattern this week is for high pressure and dry weather with temperatures 5-10°F warmer than average. 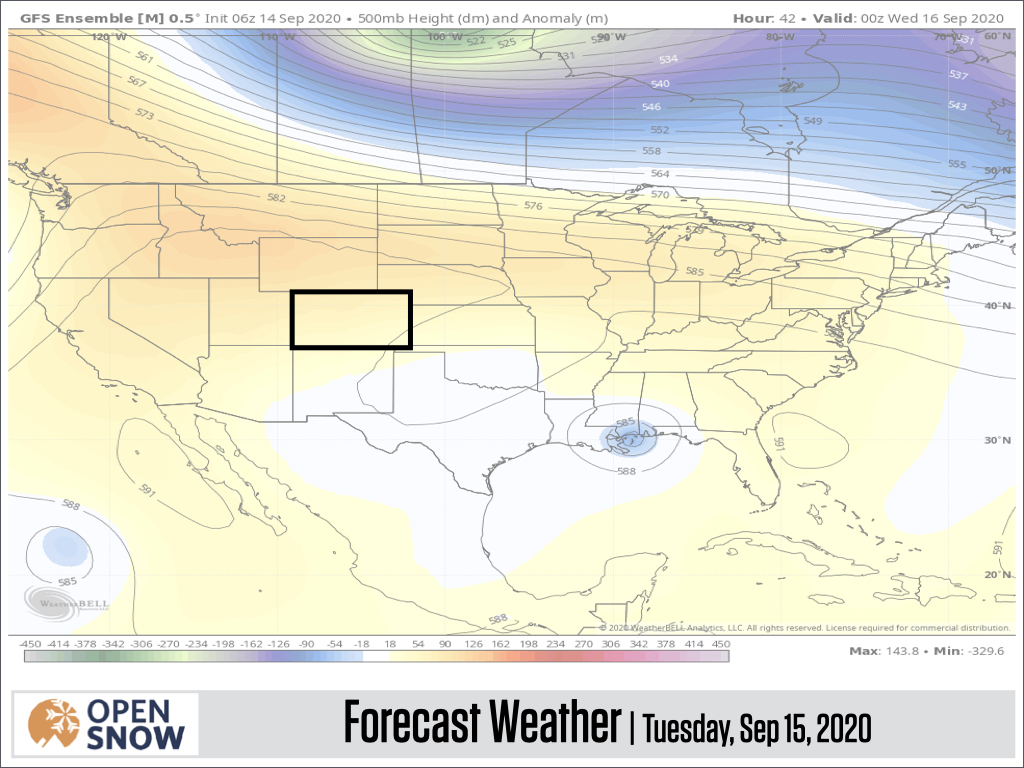 In terms of smoke, the model that we show on OpenSummit only forecasts out to 18 hours into the future.

So to look at the smoke forecast out through the whole week, I'll turn to another model that provides a 5-day outlook. This model includes other elements in addition to smoke, but at least over the western United States right now, it's a pretty good approximation for the smoke forecast. 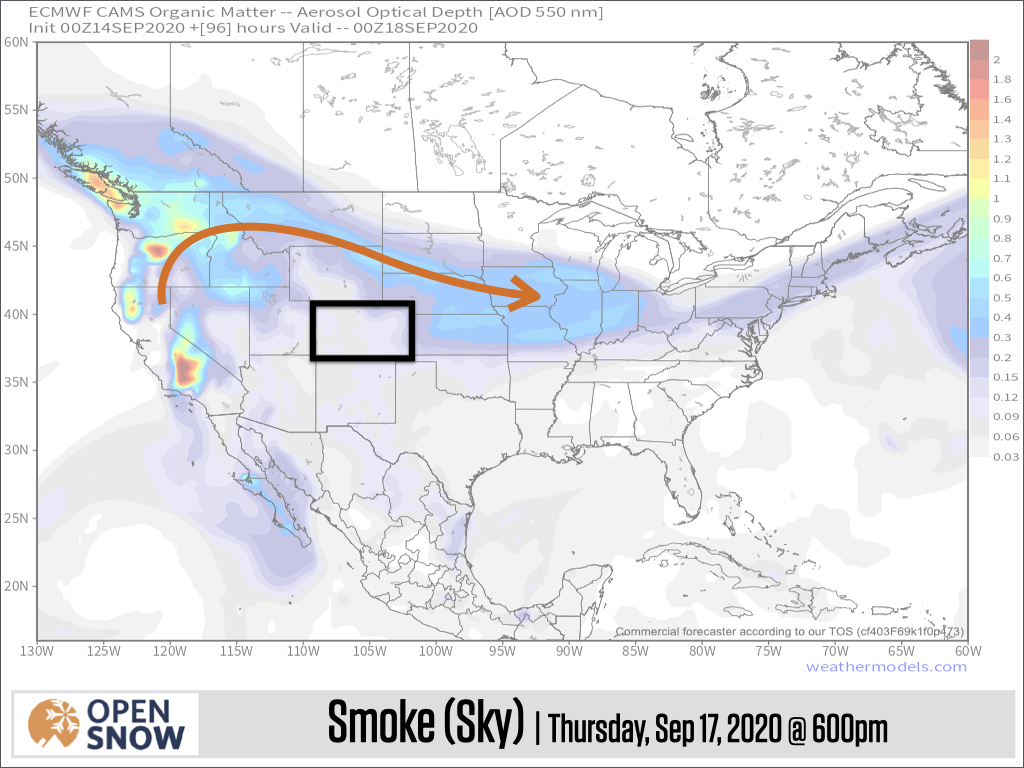 Luckily for us, it appears that most of the west-coast smoke will miss Colorado. However, we could still see some smoke according to this model, and we have to remember that 4-5 day smoke forecasts can change based on fire behavior or a slight shift in wind directions, so it's not an absolute that we'll remain mostly smoke-free this week.

The next chance for cooler temperatures and precipitation in Colorado should be Saturday night into Sunday, September 19-20. 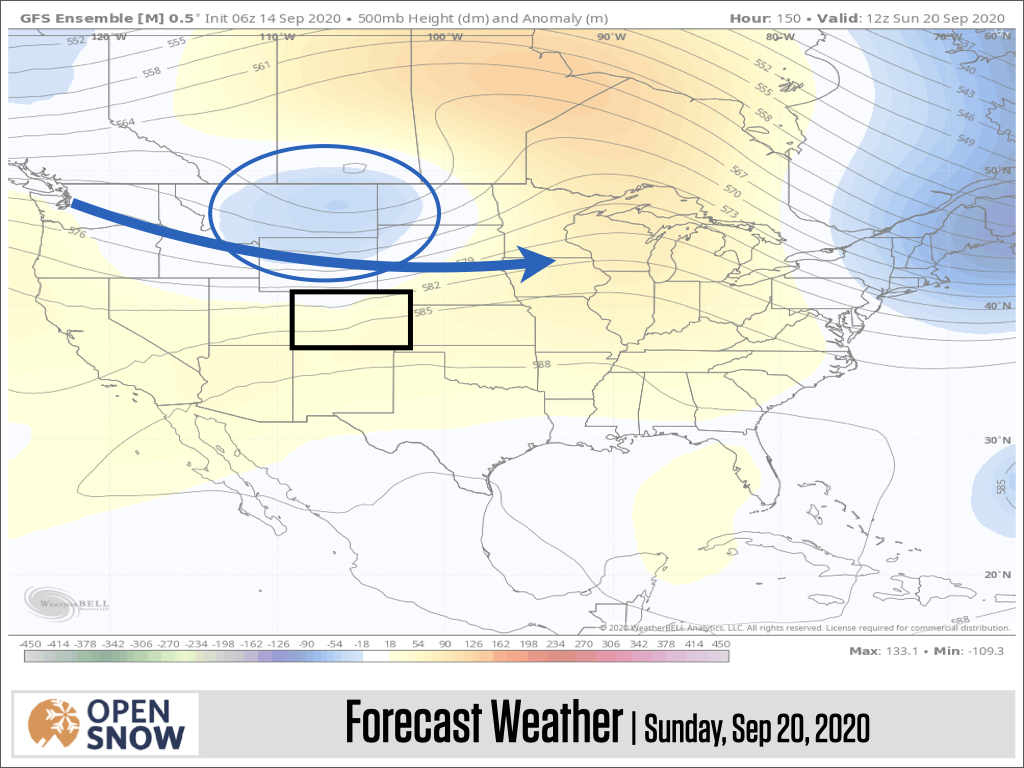 A weak storm should track to the north of Colorado and we might see enough cool air and precipitation for light snow accumulations on the higher peaks on Saturday night into Sunday. At this point it does NOT look like the storm will be intense or produce significant snow or precipitation, but we'll take any rain/snow that we can get.

The downside to the Saturday night / Sunday storm is that wind speeds will likely be faster on Saturday ahead of the storm, and that could increase fire danger here in Colorado.

We still have ongoing fires here in Colorado even though the recent snow helped to settle them down for a few days.

With dry weather coming up and a chance for stronger winds later this week or on Saturday, please do not let your guard down around wildfire risk, and please do not start any fires. It will not be until consistent snowpack forms in October or November that we might be able to let our guard down a little bit.

Thanks for reading and I'll write a new update later this week!