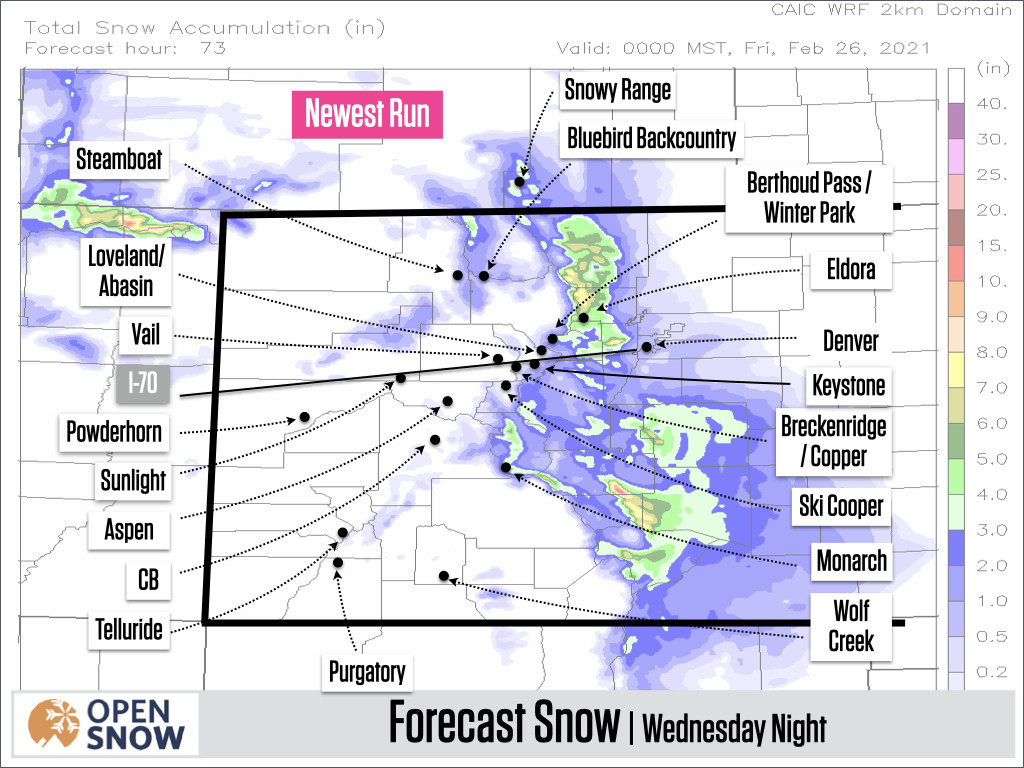 Tuesday and Wednesday will be mostly dry. On Wednesday night, a storm will bring 5-10 inches to areas east of the divide and just a dusting to 3 inches west of the divide, so Thursday morning will offer fresh powder mostly for eastern areas. The next storm will bring some snow on Friday to the northern mountains, with another chance for snow at all mountains around Monday, March 1st.

Monday brought every type of weather to Colorado's mountains. The central and southern mountains saw sunshine all day. The northern mountains started the day with clouds, and then these clouds dissipated by midday to mid-afternoon. And we even saw some snow over the northern mountains with early-morning flakes providing light accumulations to Steamboat and along the divide.

Now on Tuesday, the day will generally be dry and warm with highs in the upper 20s to low 30s. Full sunshine in the morning should give way to scattered clouds during the midday and afternoon, and wind gusts will become stronger during the afternoon over the northern mountains.

On Wednesday, most of the day will be dry and temperatures will be a few degrees cooler compared to Tuesday.

On Wednesday night, the next storm will bring snow with the deepest accumulations of 5-10 inches east of the divide favoring Cameron Pass, Rocky Mountain National Park, Eldora, Echo, all the foothills along the front range, and south to Cuchara. Other mountains could see anything between a dusting to a few inches of snow by Thursday morning but the wind from the east only favors areas east of the divide.

In theory, the Wednesday night storm seems simple to forecast with an east wind bringing the most snow to areas east of the divide and a general 5-10 inches in this area. However, the models have been waffling back and forth with details, at times showing more snow for northern areas and at other times for southern areas. The graphics below show the three snow forecasts from the CAIC WRF 2km high-resolution model. The first forecast is the most recent, and the lower two forecasts were made further in the past. 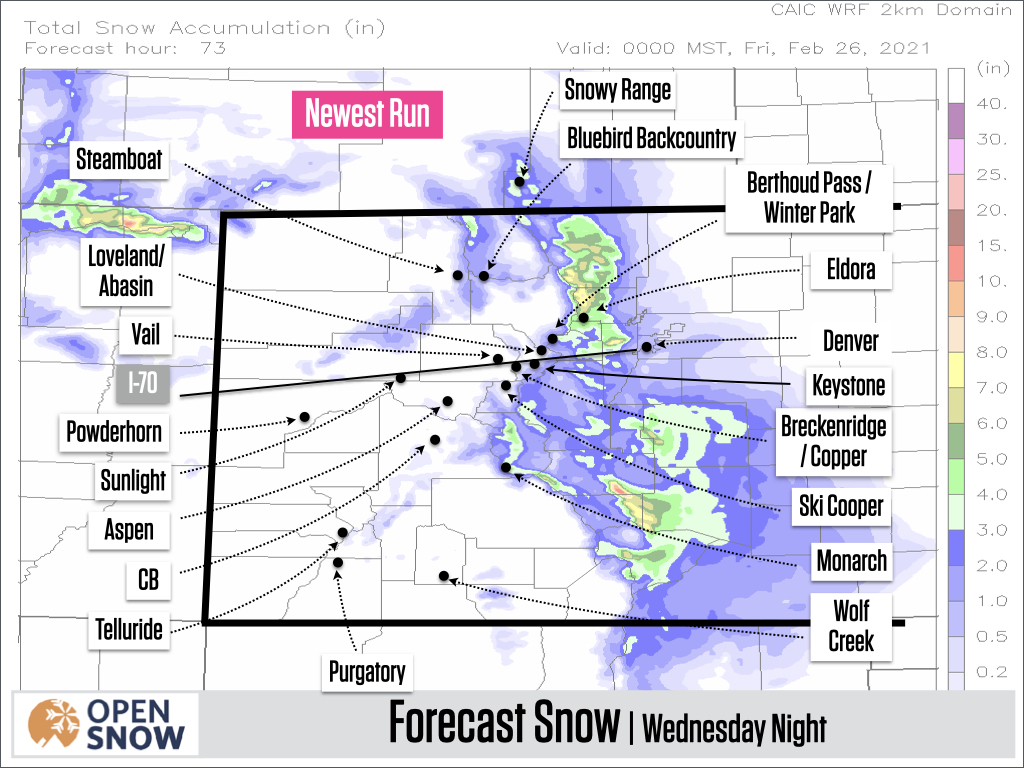 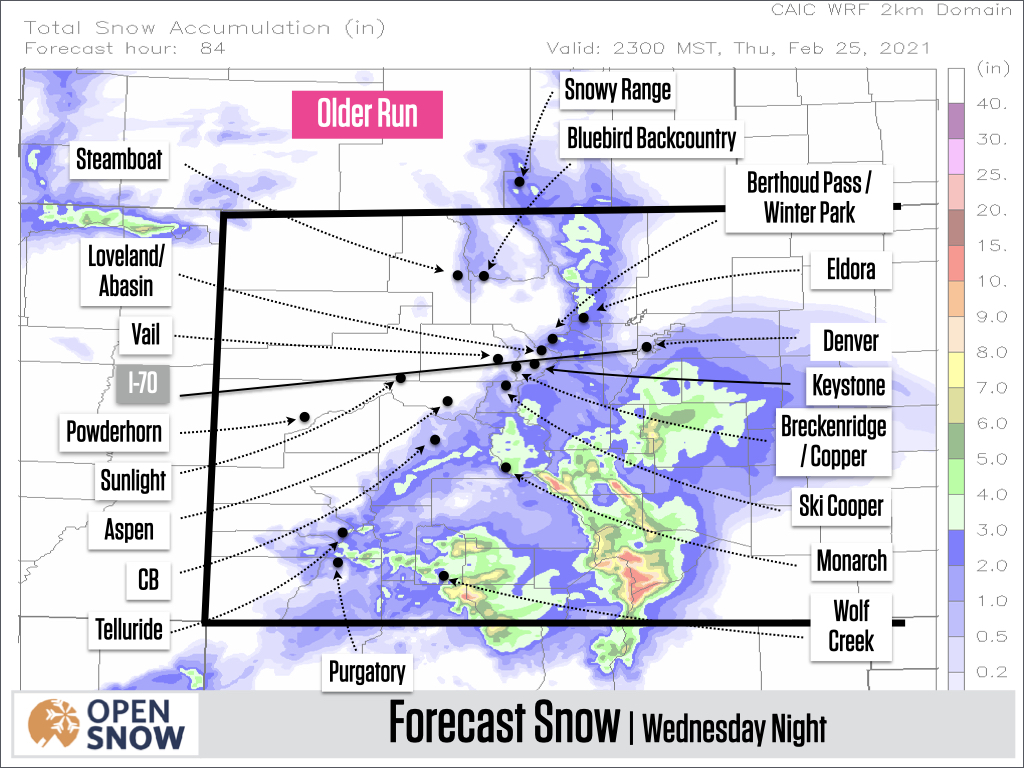 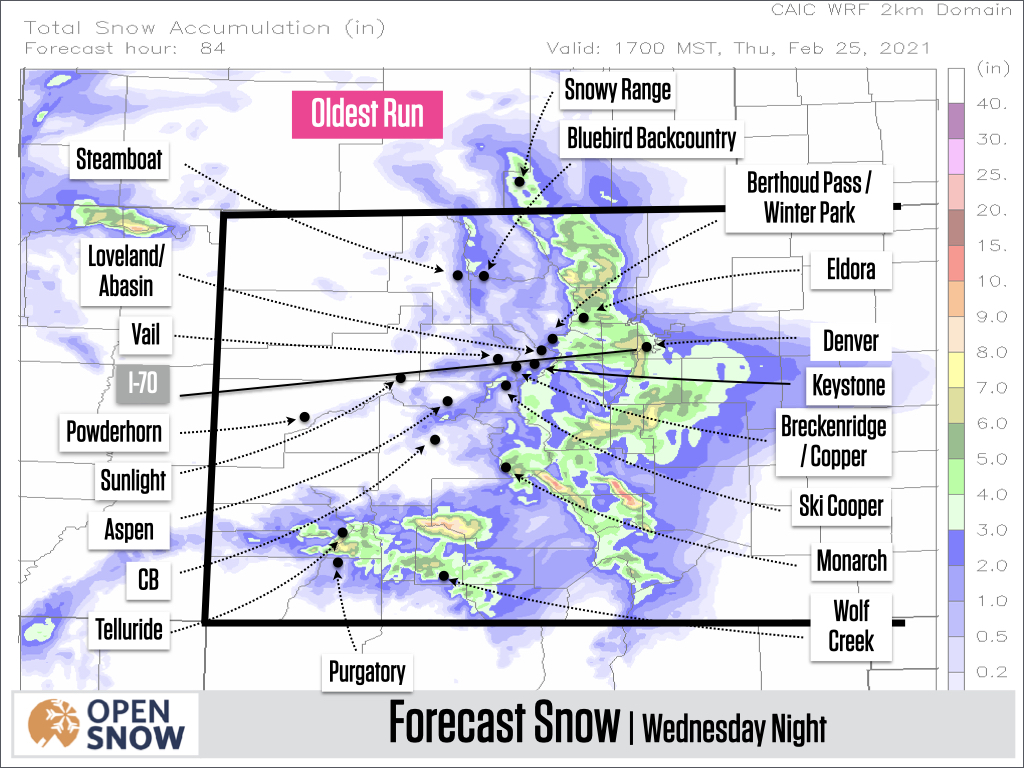 The change in the forecast between each of the above model runs gives some indication that there is more uncertainty in the snow forecast than we might expect for a storm that will begin in only 36 hours. But when we average these model runs together, and look at other models, all generally show 5-10 inches in the eastern foothills with fewer than 3 inches for other areas, so we'll go with the average and hope that this strategy works out well.

The bottom line for the Wednesday night storm is that Thursday morning will offer the freshest and deepest snow east of the divide with much lighter amounts west of the divide.

The next chances for snow will be between Friday, February 26, and Monday, March 1st. This storm will track around Colorado, staying to our northwest, then to our west, then to our southwest, and then eventually it will drift to our southeast, and all of this will take the better part of four days. I expect generally low snow totals since this storm will not make a direct hit on Colorado, and the best chances for snow will be on Friday in the northern mountains and then around Monday for all mountains. If the storm picks up additional moisture as it slides by on Monday into Tuesday, perhaps we could get lucky with deeper snow totals early next week.

There could be additional storms around Thursday, March 4th and then again around Monday, March 8th. These dates are based on signals that are offered by the longer-range models and these systems are too far away for anything more than speculation at this point.