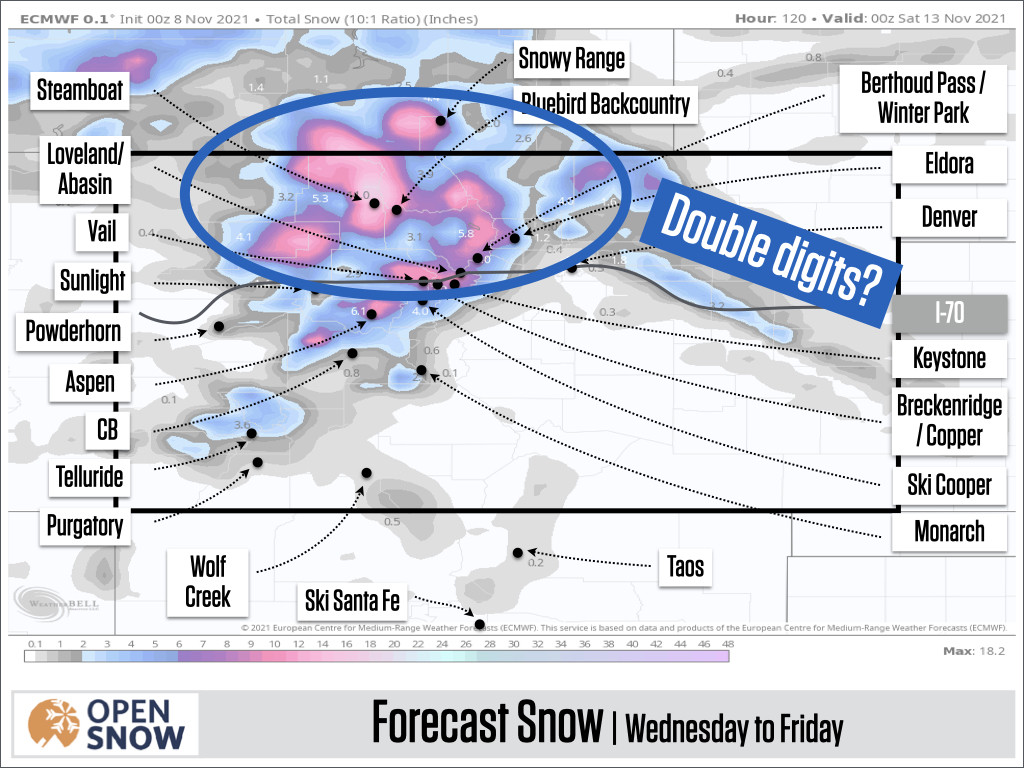 Monday and Tuesday will continue our streak of dry and warm weather. On Tuesday evening, snow will begin to fall across most mountains, and then we'll see snow continue from Wednesday through Friday for the northern and central mountains. Total snowfall this week could be 10+ inches near and north of I-70 with 5-10 inches in the central mountains. More snow is likely during the following week.

Sunday was another in our streak of sunny and warm days. And also like the previous days, nighttime temperatures were borderline for snowmaking, though with dry air lowering the wet-bulb temperature, it looked like many snowmaking crews did fire up their systems for at least some part of Sunday night.

Monday and Tuesday will be a continuation of the weather that we've seen the previous few days. Expect dry conditions, warm temperatures reaching into the 40s for highs, and passing high clouds that will filter the sunshine.

The midweek storm that we've been tracking for a week will arrive on Tuesday evening with snow starting to fall at most mountains sometime between Tuesday at sunset and Tuesday night at midnight.

The good news about the upcoming storm is that all models now agree that this will be a prolonged event with snowflakes falling for multiple days across the northern and maybe central mountains.

Expect times of snow (and times of drier weather) lasting from Tuesday through at least Friday, and we might even see some snow showers during the upcoming weekend as well, at least for the far northern mountains around Steamboat, Cameron Pass, and maybe closer to I-70.

While it's still a little early to figure out if we'll see snow accumulations next weekend, the snow forecast for this week is looking pretty good for a good chunk of the state. Below is the European model's snow forecast from Tuesday night through Friday evening. The pink colors show a decent chance for 8-15 inches across the northern mountains. 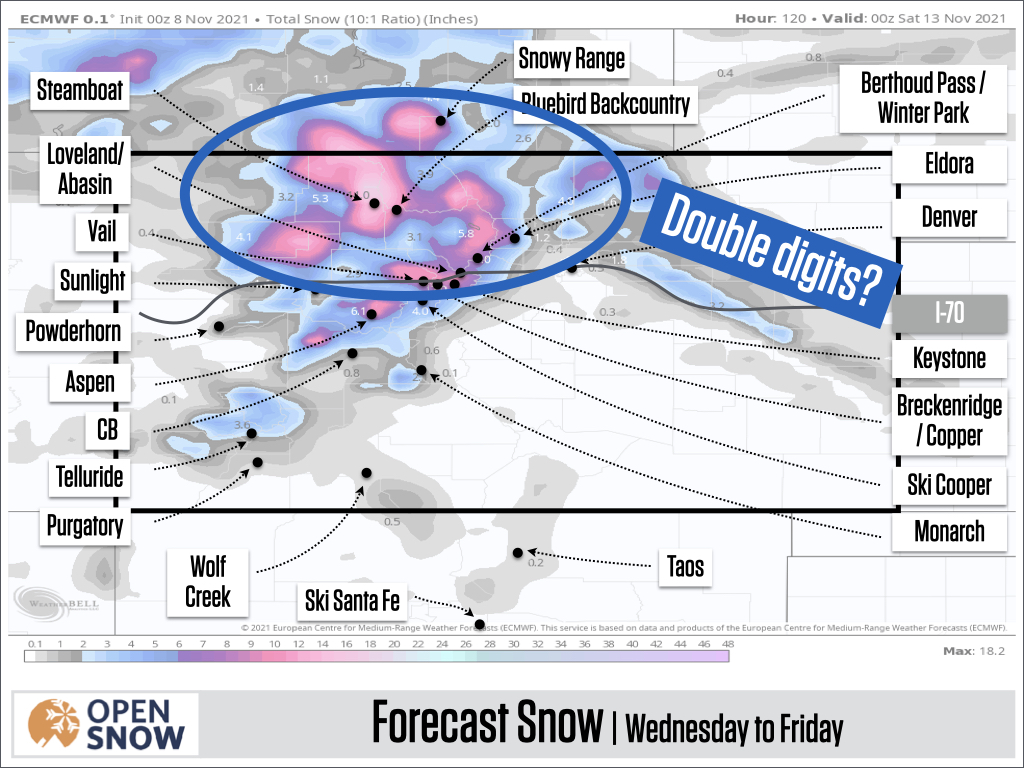 Yesterday, I wrote that only the far northern mountains would have a good chance for 10+ inches, but with the possibility of snow for multiple days, I now think that 10+ inch totals could be possible farther south down to I-70 or so. And the central mountains could also see respectable totals of maybe 5-10 inches if the waves of snowfall move far enough south, and also because the wind direction will be more from the west and west-northwest (instead of pure northwest) and a more westerly direction can be more favorable for the central mountains.

In terms of snow conditions, they could get better and softer from Wednesday into Thursday and into Friday. While it's hard to time each potential wave of snowfall after the first one on Tuesday night into Wednesday morning, some models are showing a stronger wave later Thursday into Thursday night, so that means that Friday morning's conditions could be soft and fun.

Inbounds terrain is limited to a few runs at a few mountains right now, though this should expand somewhat due to the new snow and temperatures in the teens and 20s from Wednesday through Saturday which should help snowmaking. Also, Breckenridge and Vail are scheduled to open on Friday, November 12th, which is (lucky) good timing with this week's storm. And if the backcountry is your thing, please remember to check the avalanche forecast before heading out, it's the right habit to have, even if it feels like early-season conditions are safe and you know your zone.

Next weekend (Nov 13-14) should be dry for most mountains though the far northern mountains could continue to see snow showers and cool air hang around.

The first two days of next week (Nov 15-16) should be dry as the Rockies will be in between storm systems.

Then during the middle of the week, the next storm should move across the Rockies. While the map below shows that we'll be on the edge of the storm track, increasingly, most models (and multiple versions of each model) are showing that we'll get at least some snow here in Colorado, with the best chance centered around Wednesday, November 17. 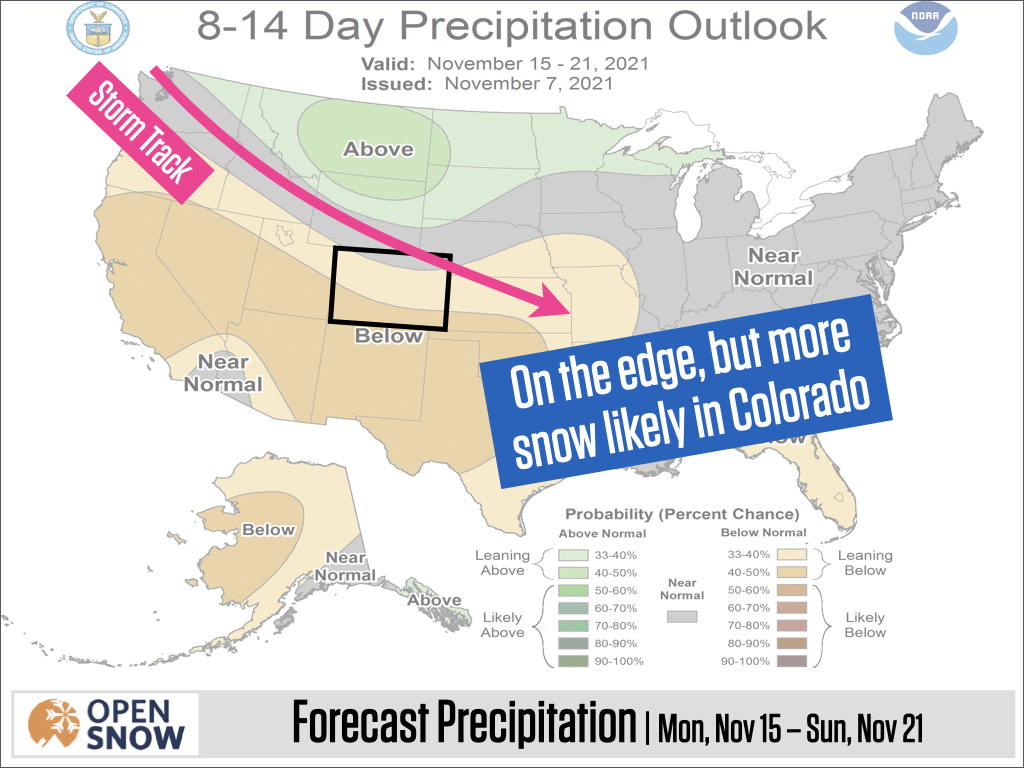 PS - I posted more info below about my talk in Breckenridge this Thursday night!