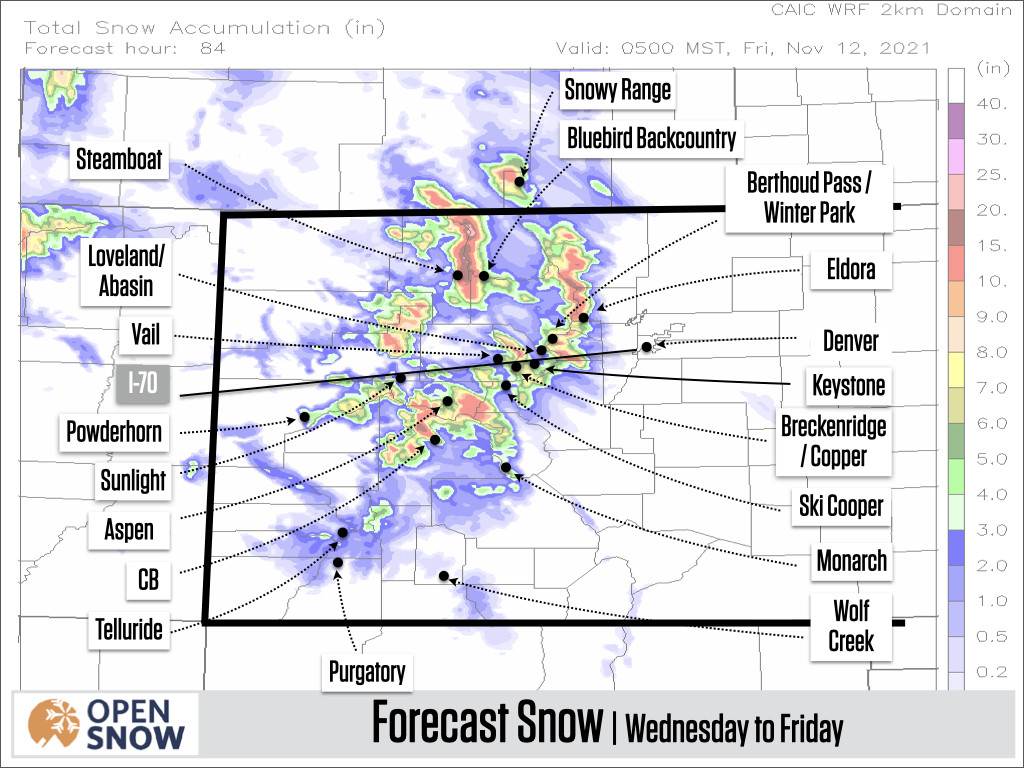 Tuesday will be dry, and then we'll see snow showers begin on Tuesday evening after sunset. The first wave of snow will occur from Tuesday night through Wednesday midday, then another wave of snow should hit on Thursday and Thursday night. The most snow will fall for mountains near and north of I-70 and west of the divide with possible double-digit totals, and amounts will decrease farther south.

Melissa C., a fan of the Colorado Daily Snow, emailed me to let me know that the cam at the top of Ski Cooper captured a herd of Elk ambling around on Monday morning. The animals will continue to rule the slopes until the snowpack deepens and skiers and riders try to take over. 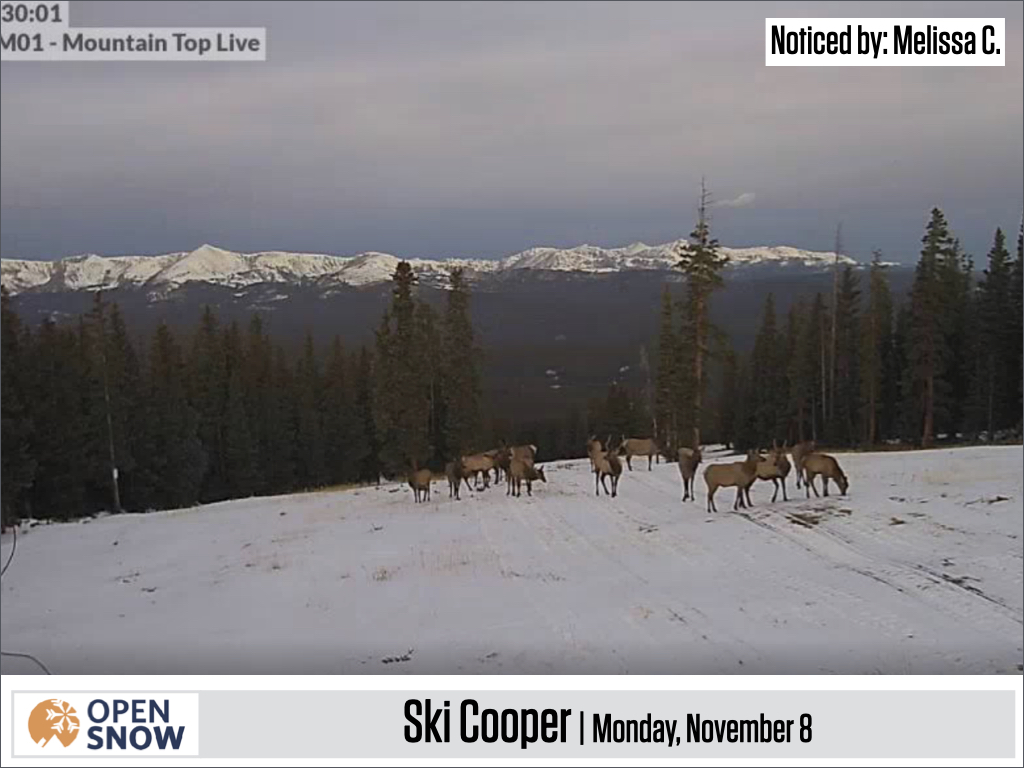 Weatherwise, Monday was a mundane day. We saw warm temperatures in the upper 30s to low 40s and clouds increased through the day. On Monday night, temperatures were once again borderline for snowmaking.

Now on Tuesday morning, the next storm is finally showing itself. The radar animation on Tuesday morning around sunrise is picking up rain and snow moving from the west coast into the western Rockies. This is the precipitation that will arrive in Colorado on Tuesday evening.

Storm total snowfall from a multi-model average continues to indicate that the best chance for 10+ inches of accumulation will be areas farther to the north and to the west. 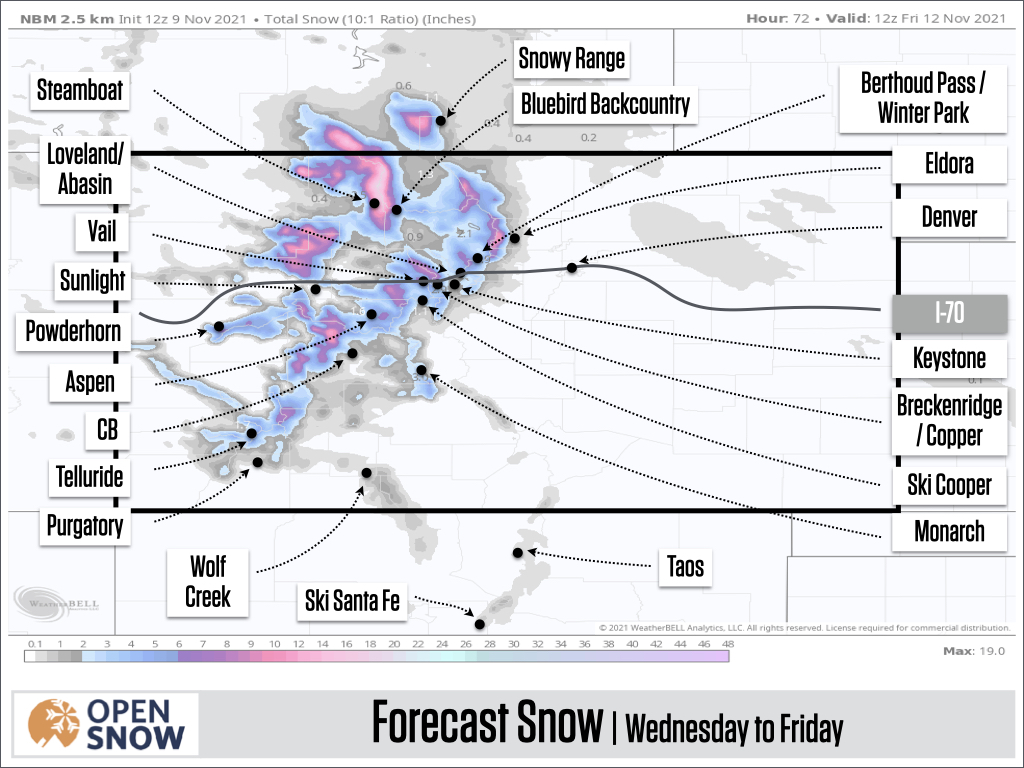 Below is the CAIC high-resolution forecast. While the detail of this model is tempting, my advice is to not just look at the latest forecast (below) but also the previous forecasts made each of the preceding six-hour periods. In the case of the upcoming storm, the model's forecast has waffled around with each new run, yet the average of a few versions does snow a decent chance for double-digit totals over the northern and western mountains. 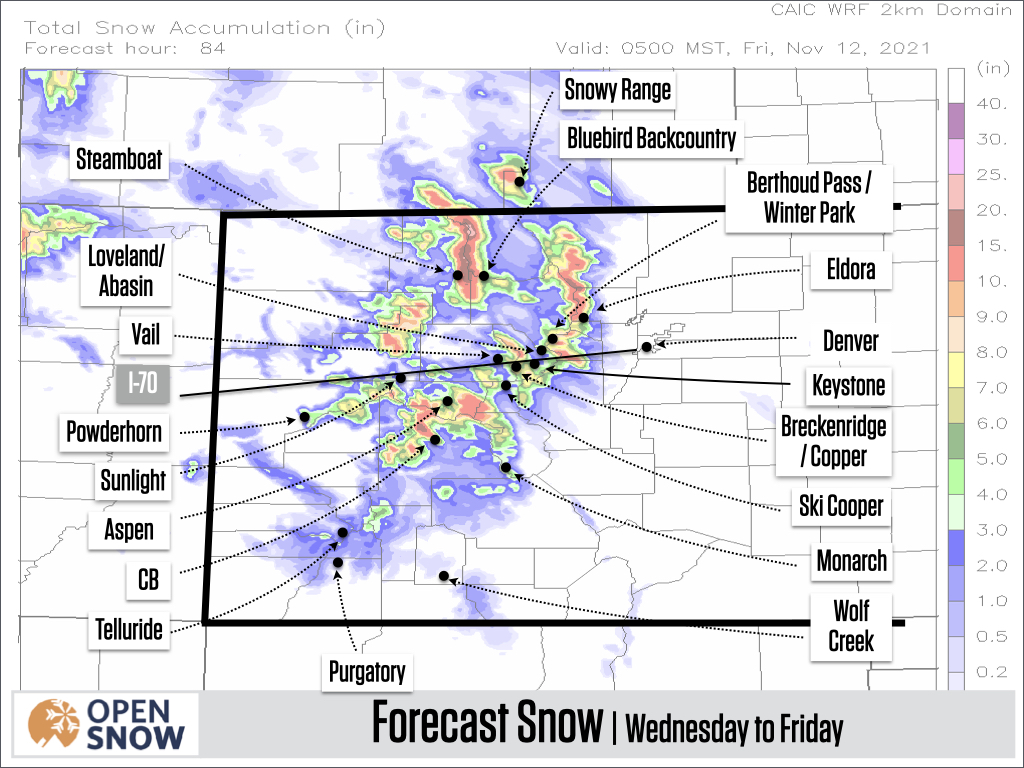 Breaking down the forecast a bit more, the first part of the storm on Tuesday night and Wednesday looks like it will weaken as it moves over us, so 2-6 inches of snow is likely, but I'm not as excited for this part of the system to overproduce.

The second part of the storm from Thursday to Thursday night is more uncertain and has the chance of overproducing as moisture will be decent, we'll be close to the jet stream, and a wind from the west and west-northwest is favorable for the Steamboat area, the Flattops, and for some mountains along I-70. The exact outcome may depend on exactly where a few of the more intense bands of snow set up. Right now it looks these bands could stay along and north of I-70, though there is a chance they could move south toward Ski Cooper and the Aspen area as well.

Temperatures during the storm will be moderate, in the teens and 20s, and this should help crews make snow 24 hours a day for a few days.

The outcome for us looking to slide on snow is that Wednesday will offer some new snow, but I think the best conditions will be on Thursday afternoon and Friday morning during and after the second part of the storm. Inbounds terrain continues to be limited, and if you're heading out to the backcountry, please check the avalanche forecast.

Saturday and Sunday will be dry for most of the state, while mountains north of I-70 could see lingering clouds and snow showers with some accumulation.

Next Monday and Tuesday will be dry and warmer for the entire state.

Our next chance for snow will be around Wednesday, November 17, and Thursday, November 18. It's too early to speculate about snow amounts, but there's a decent probability that most or all mountains will see snow.

PS - I posted more info below about my talk in Breckenridge this Thursday night!