A fun (snowy) weekend coming up 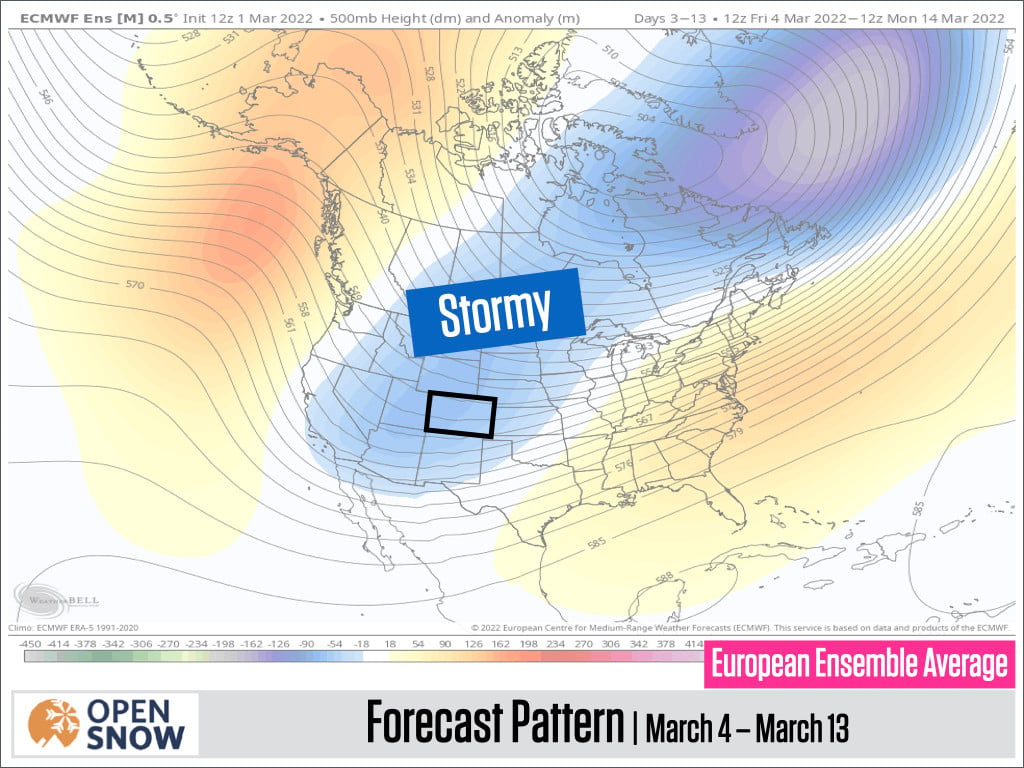 With the current weather feeling like full-on spring, it's hard to fathom that winter will make a comeback in a few days, but yes, that is what will happen. From Friday through Monday, we'll see multiple rounds of snow with totals of 8-16 inches and a few days with soft conditions and some real powder as well. Then there should be two more storms as we head into mid-March.

Tuesday was sunny and very warm with high temperatures ranging from the upper 30s at the higher elevations to the 40s at many mountains and even some 50s in the southern mountains and at lower elevations across the state. It certainly feels like spring.

Wednesday and Thursday will also be warm with high temperatures in the same upper 30s to low 50s range across the state. While Wednesday will be mostly sunny, on Thursday, we will see high-level clouds that will filter/dull the sunshine.

With these warm temperatures, it's likely that lower elevations and south-facing slopes will see very soft and slushy snow during the afternoon, then firmer and crusty snow in the morning due to the overnight freeze.

Weather forecast models are incredible as they allow us to anticipate with a pretty high amount of confidence that our current spring-like weather will come to an end on Friday with colder temperatures and snow throughout the weekend and into early the following week.

Here are my thoughts about the multiple rounds of snow coming from Friday through Monday.

Looking at the latest models, I still think that snowfall from Friday, March 4, to Monday, March 7 will average 8-16 inches for most mountains. But again, this is just an average, and if a mountain is hit by an intense cell on Friday or Saturday, they could see 2-3 inches per hour and go above this range, and vice versa if a mountain misses some of the stronger cells. Based on the wind direction, I would give the higher odds for powder to the southern and central mountains on Friday and Saturday, and then the odds should shift somewhat to the central and northern mountains on Sunday afternoon and Monday morning.

We made an update to our OpenSnow high resolution 3km model and now can show the average snow forecast across the last three runs of the model. This model runs every six hours, and forecasts out to five days (120 hours). Especially with forecasts like this one, with a lot of the snow coming from randomly placed intense cells of snow, it's best to average multiple forecasts. So here is the three-run average snow forecast through Sunday morning. 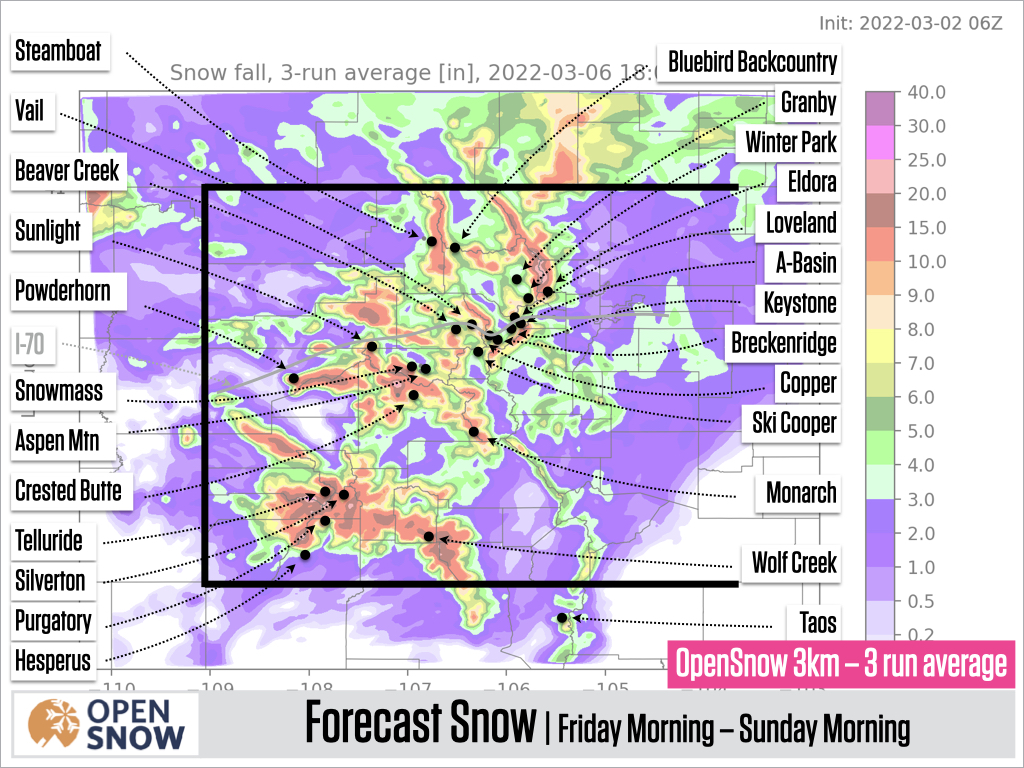 To me, this graphic looks like it's in the ballpark, and remember that there will be more snow on Sunday afternoon, Sunday night, and Monday morning which is not yet included in this forecast (since this model does not extend that far into the future).

The weather pattern forecast indicates that Colorado (and the Rockies in general) will generally be at the center of the storminess during the early and middle part of March. 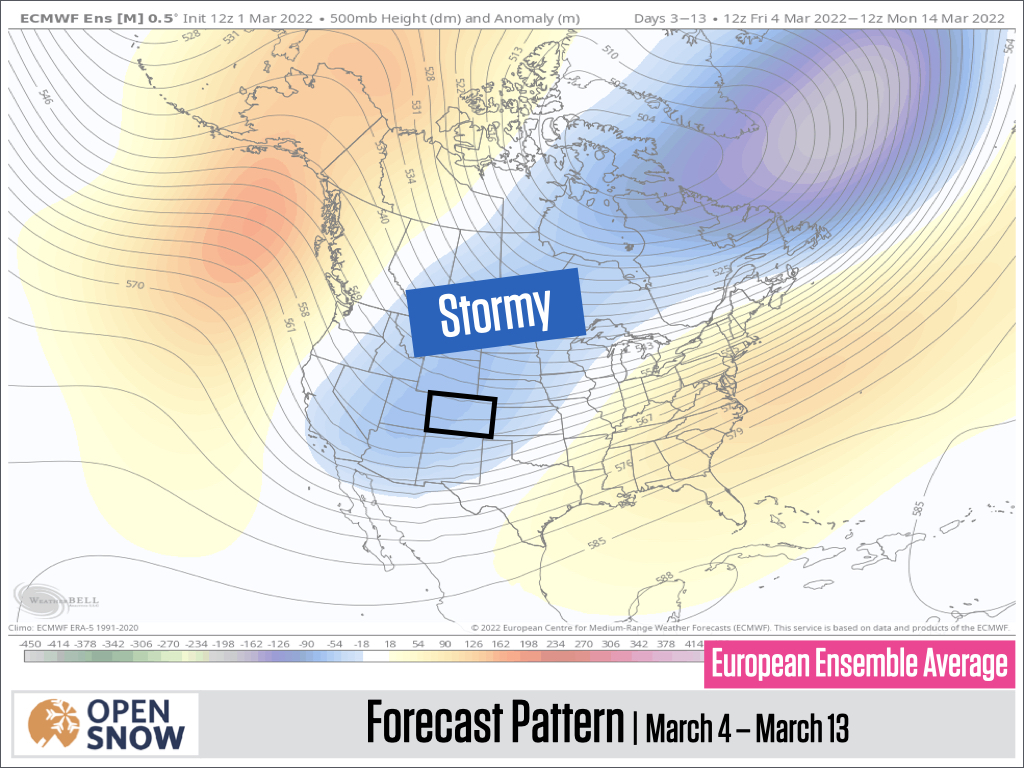 For next week, we should see dry weather on Tuesday, March 8, and Wednesday, March 9, then the next storm will likely arrive around Thursday, March 10. And after that, there is a good chance that another storm will bring snow to Colorado on or around Sunday, March 13.

P.S. – If you have an extra minute, please leave a 5-star review for our OpenSnow app. Your review helps others have confidence that OpenSnow is a reputable and (dare I say) a pretty useful service to help find the best snow.

Click either link above and scroll down to the section titled “Ratings & Reviews”. Thanks for doing this, I really appreciate it!

P.P.S. – Check out the 2022 Invest in Kids Jane-A-Thon, the longest-running ski and snowboard fundraising event this Friday and Saturday at Mary Jane. You can still join to raise money to help improve the health and well-being of Colorado's youngest children and families. This year’s event will include skiing and an in-person apres ski party to celebrate success and acknowledge contest winners. It sounds like they are REALLY close to their fundraising goal so donations are still accepted too. Learn more here.