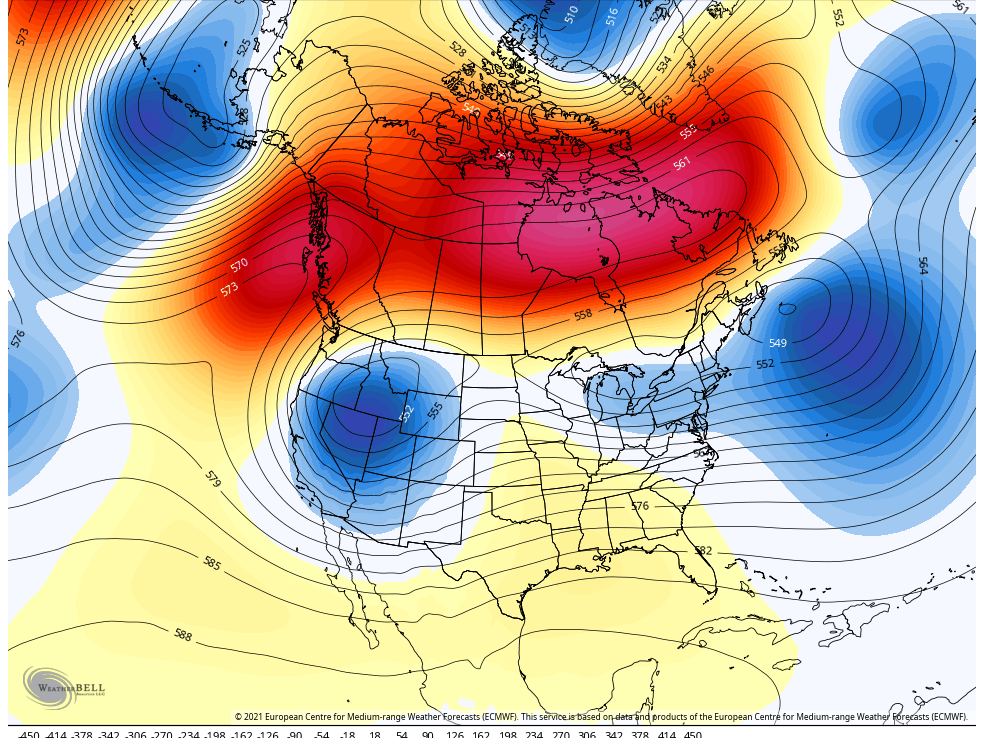 Bone dry conditions prevail through the weekend. From April 13th to the 18th a stormy pattern is forecast to set up and stall to our northwest bringing the chance for multiple days of light precipitation for northern New Mexico. The Jemez and Sangres should see some modest snow accumulation but the more significant totals could just miss us to the north.

Extreme dry conditions with some typical Spring winds and dust will continue Friday through Monday. Temperatures will remain in the 40's/50's by day and 20's by night above 10,000 feet elevation.

The combination of warm, dry, and dust (which rapidly speeds up snowmelt when dust sits on the surface of the snow giving the sun something to radiate off of) over the past two weeks is decimating the snowpack across New Mexico's high country. Here is the river basin snowpack from March 26th on the left compared to April 8th on the right showing rapid decline in the northern mountains. 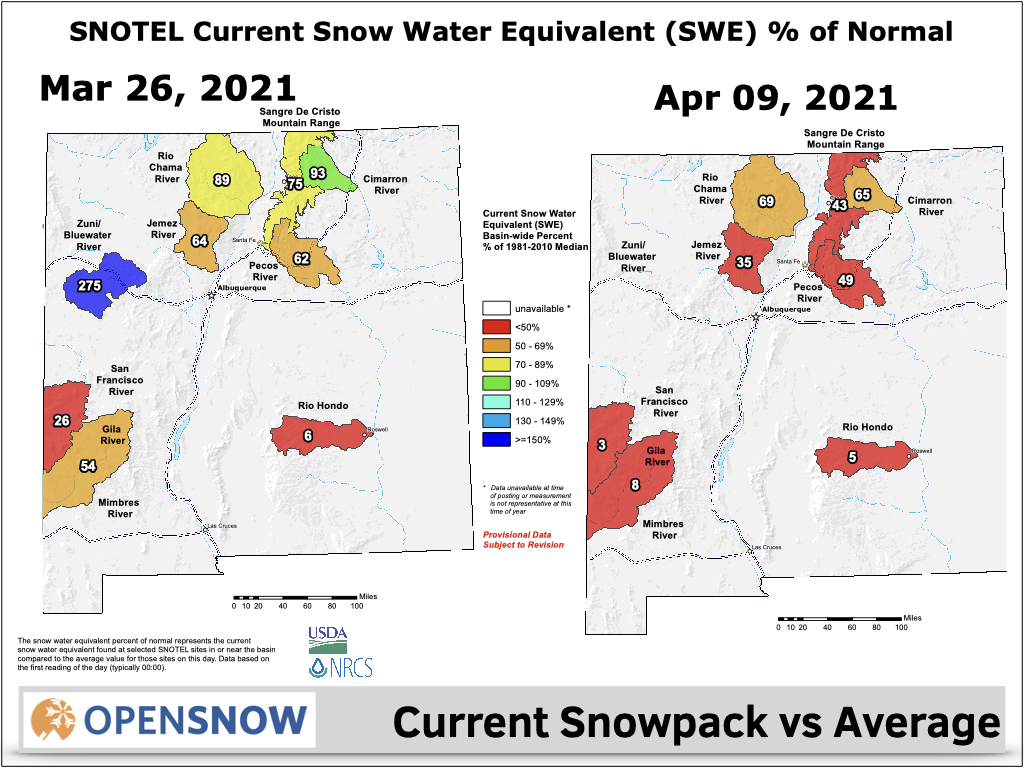 The Taos Avalanche Center posted a final end-of-season discussion looking at what to expect in the days and weeks ahead in terms of snowpack conditions if heading out into the backcountry.

We should see some much-needed precipitation in mid-April which I discuss in the Extended Forecast below.

As part of the series of season wrap-up posts, one reader asked for an update on La Niña and when we might expect the La Niña that has persisted most of this season to come to an end.

In January I posted an in-depth analysis of La Niña (check out that post if you would like a refresher on El Niño and La Niña) and how the 2020-2021 season has been mostly classified as a moderate La Niña year. We zoomed in on a historical climate data map of New Mexico from 15 past moderate La Niña seasons dating back to 1903 courtesy of climatologist, Brian Brettschneider. 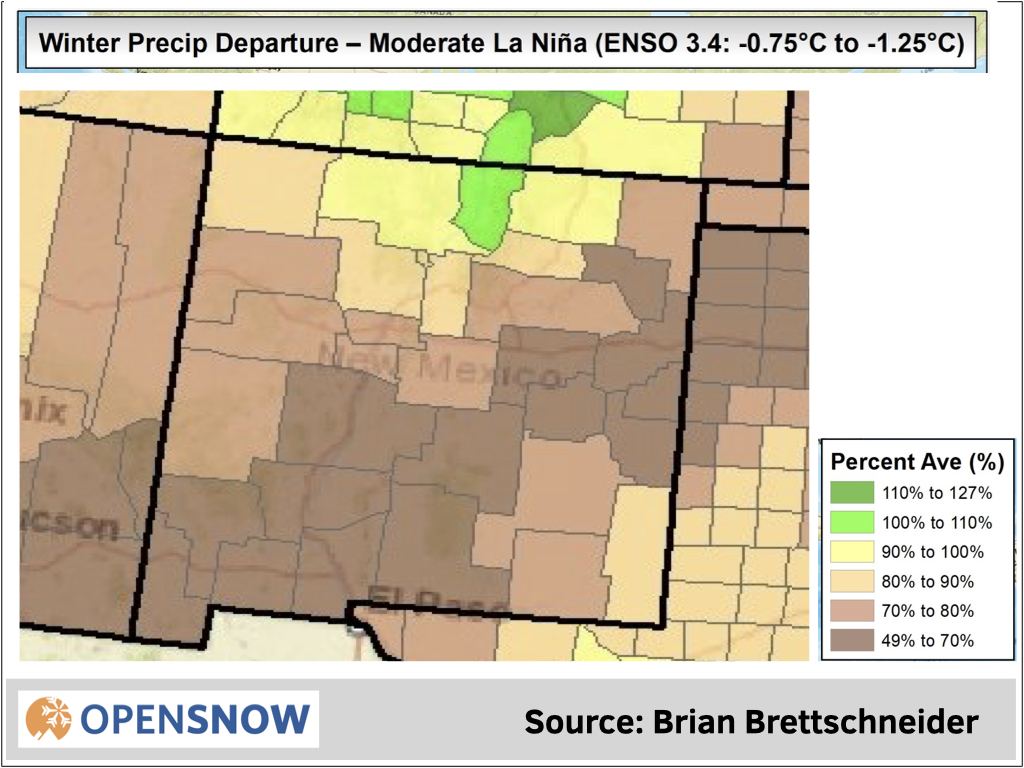 The local nuances in New Mexico since 1903 for moderate La Niñas are fascinating, with the Taos County portion of the northern Sangres highlighted in green above (Taos Ski Valley, Red River) able to achieve 100 to 110% of average precipitation. Whereas things change dramatically as you head south. The middle and southern Sangres (Sipapu, Ski Santa Fe), the Jemez (Pajarito), Sandias, and Sacramentos (Ski Apache) all decline dramatically from normal in the 15 similar years since 1903. Also noted is that the San Juans of southwestern Colorado manage fairly normal seasons in moderate La Niñas.

Now approaching the end of this snowfall season, we can conclude that 2020-2021 will end up being consistent with the general historical climate record for moderate La Niña's with the Taos County portion of the northern Sangres the only areas at or above normal. Here are Taos and Red River's snowpack trends which have maintained at or above normal most of the year. 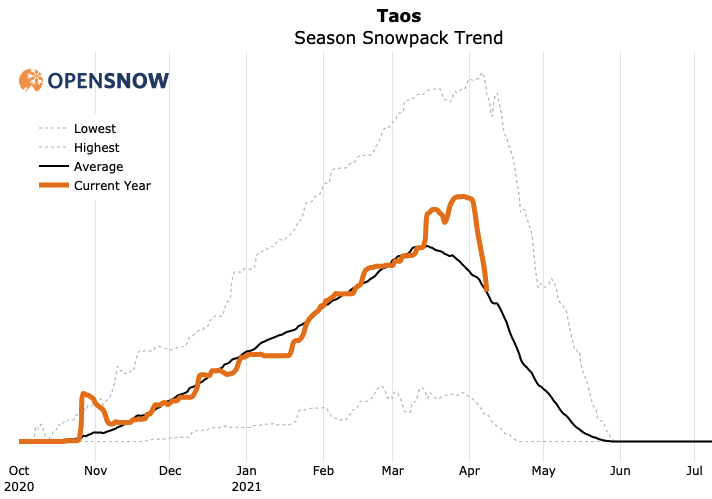 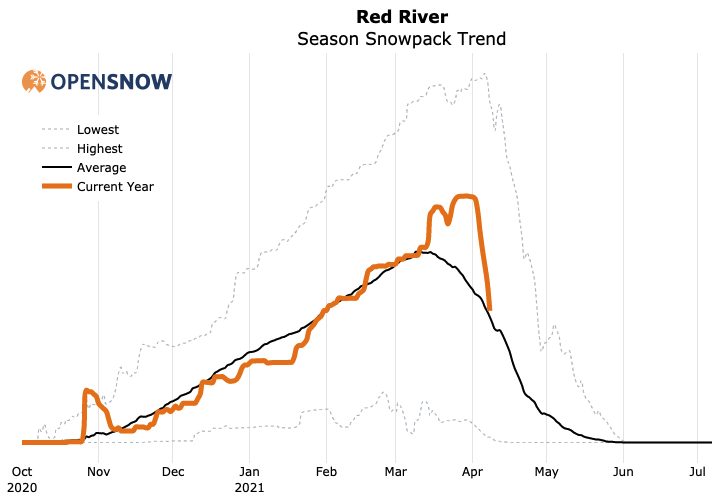 Whereas, the other four resorts in the northern mountains have remained below normal to varying degrees throughout the year, and progressively more below average the further south (Pajarito, Santa Fe). This is consistent with past moderate La Niña years. 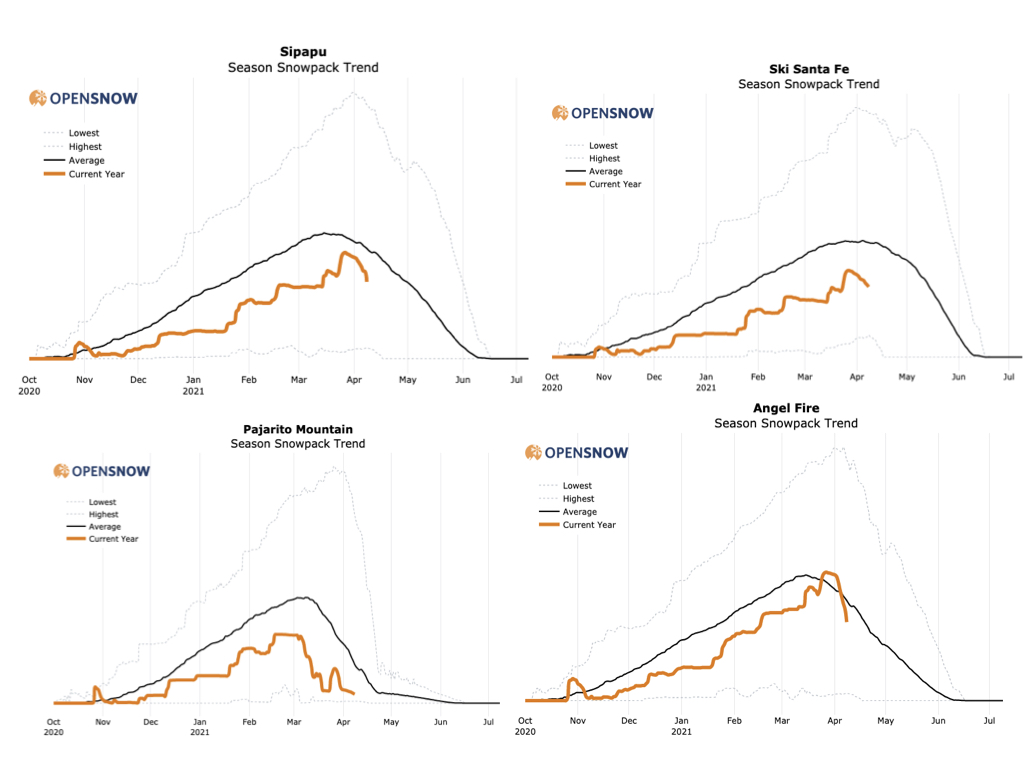 Ski Apache and the southern mountains took the biggest impact from this year's La Niña with one of the lowest precipitation years on record.

When will the current La Niña end?

NOAA Climate Prediction Center forecast as of April 9th is that a transition from La Niña to ENSO-Neutral (end of La Niña) is likely in the next month or so, with an 80% chance of ENSO-neutral during May-July 2021. You can really geek out on the outlook in NOAA's ENSO blog here. I also really like this podcast hosted by University of Arizona CLIMAS.

But we will still have to weather a dry spring as the NOAA seasonal outlook for April, May and June is below-average precipitation for New Mexico. The drought and fire hazard risks through June will be very challenging in the Land of Enchantment.

But then NOAA calls for us to get back on track with a more normal or above-average monsoon season for July, August, September which would be a dose of good news.

Turning back to our more immediate weather forecast, starting around April 13 a stormy pattern will set up and stall to our northwest. 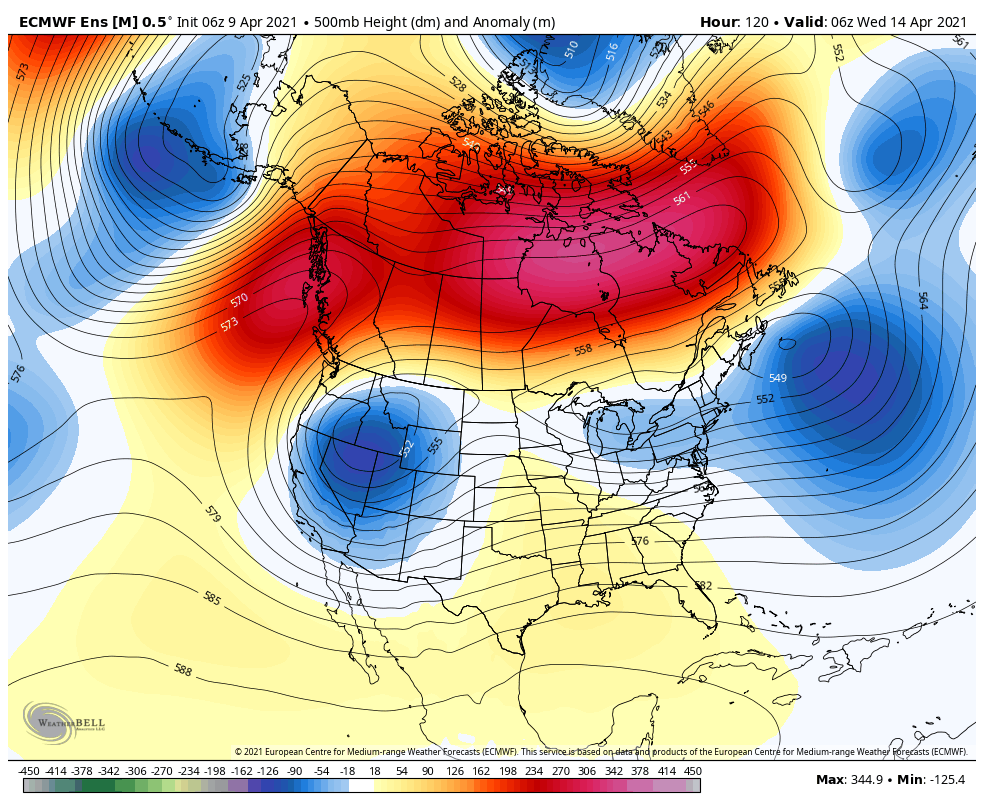 This will swing shots of moisture and cold eastward and northern New Mexico will be on the cusp of some decent precipitation with greater totals across Colorado. Here are the European and GFS Ensembles. 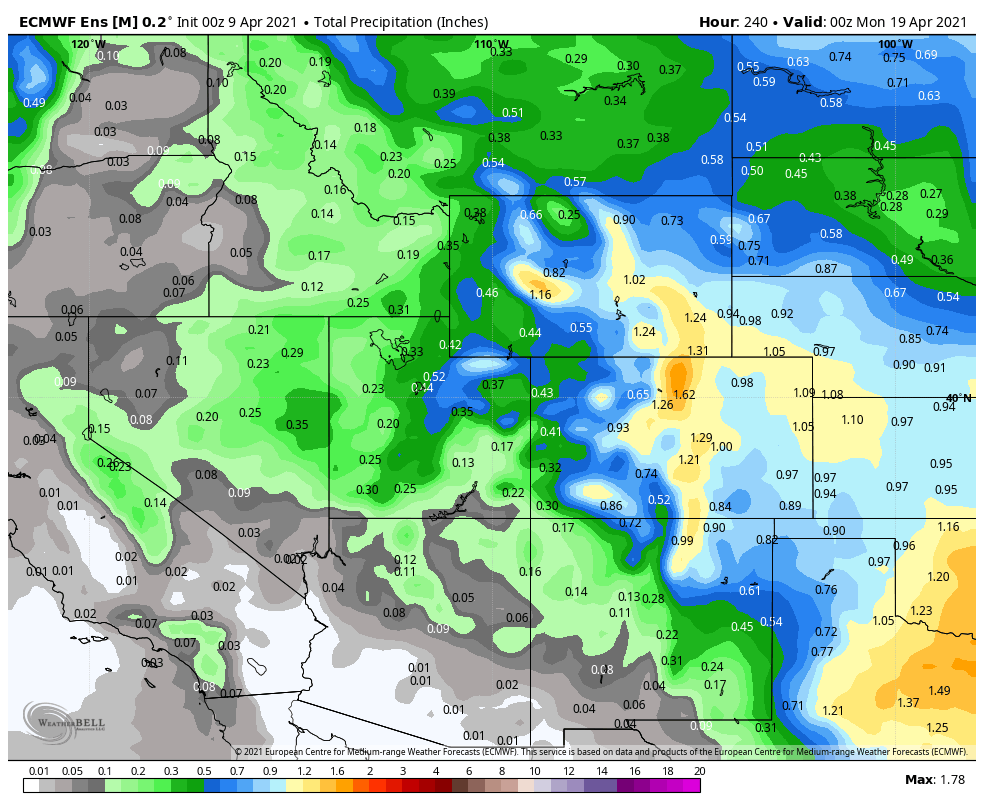 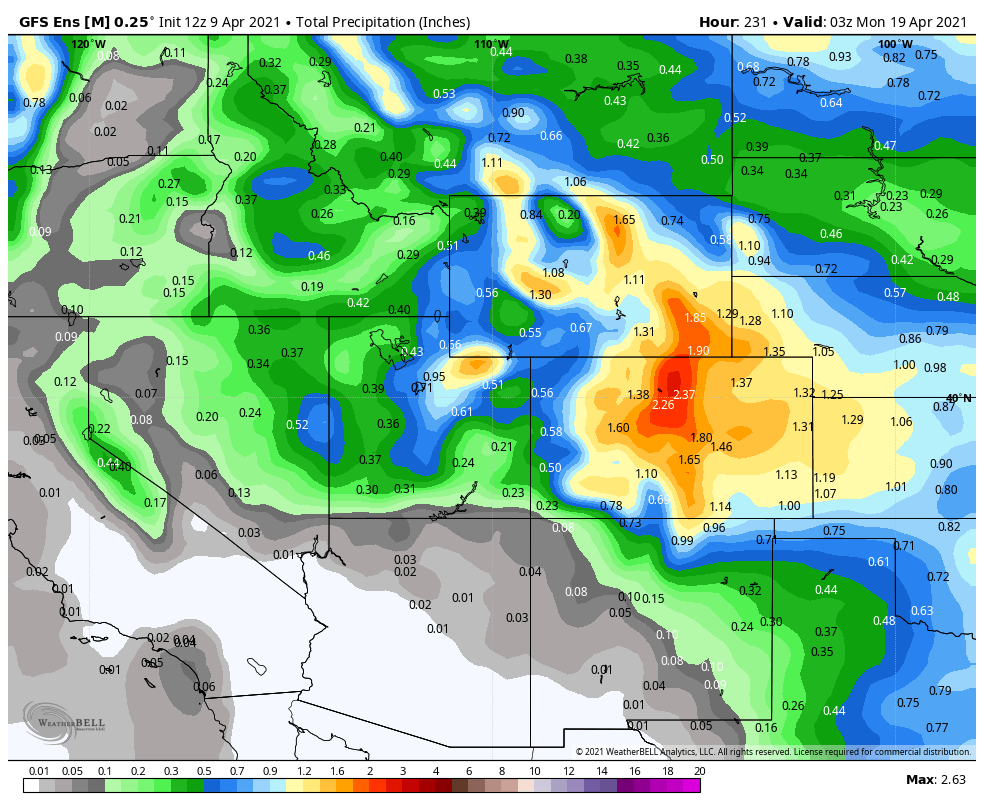 I am really hoping we will see some southern nudges in the precipitation for next week both to help with moisture for our parched state, and also to extend the spring backcountry season as long as possible.

I will continue to cover end-of-season wrap-up topics and if you have specific questions or requests feel free to send them along.