Heads up, there may be fresher snow! Read the latest Ski Utah Daily Snow

A blustery Thursday will give way to a snowy Thursday night for Utah mountains. Friday powder before a break on Saturday. Then, another storm likely for late Sunday into Monday.

Windy today as the SW flow continues to crank ahead of the next system which is sliding into California as we speak. This front is going to cross the Great Basin this evening into tonight. Ahead of it we will see wind, but we should also see some light snow develop in the highest elevations by this evening. Then, the front itself crosses the area between 12am and 4am on Friday. You can see this clearly on our OpenSnow Future Radar:

We are going to have a few hours of very intense snow overnight. With some lighter snow before and after that period. Looking at QPF for this storm, the Wasatch and Western Uintas are showing roughly 0.75-1.25". The snow-to-liquid ratios (SLRs) will be low at first with denser snow but will trend higher with lower density snow behind the front. I think an average SLR of 12:1 is likely. So, that means that roughly 9-15" of snow can be expected.

Areas farther south in Utah can expect lower amounts of 3-6" for central and southern mountains. Full storm expected snowfall is also nicely displayed by the blend of models: 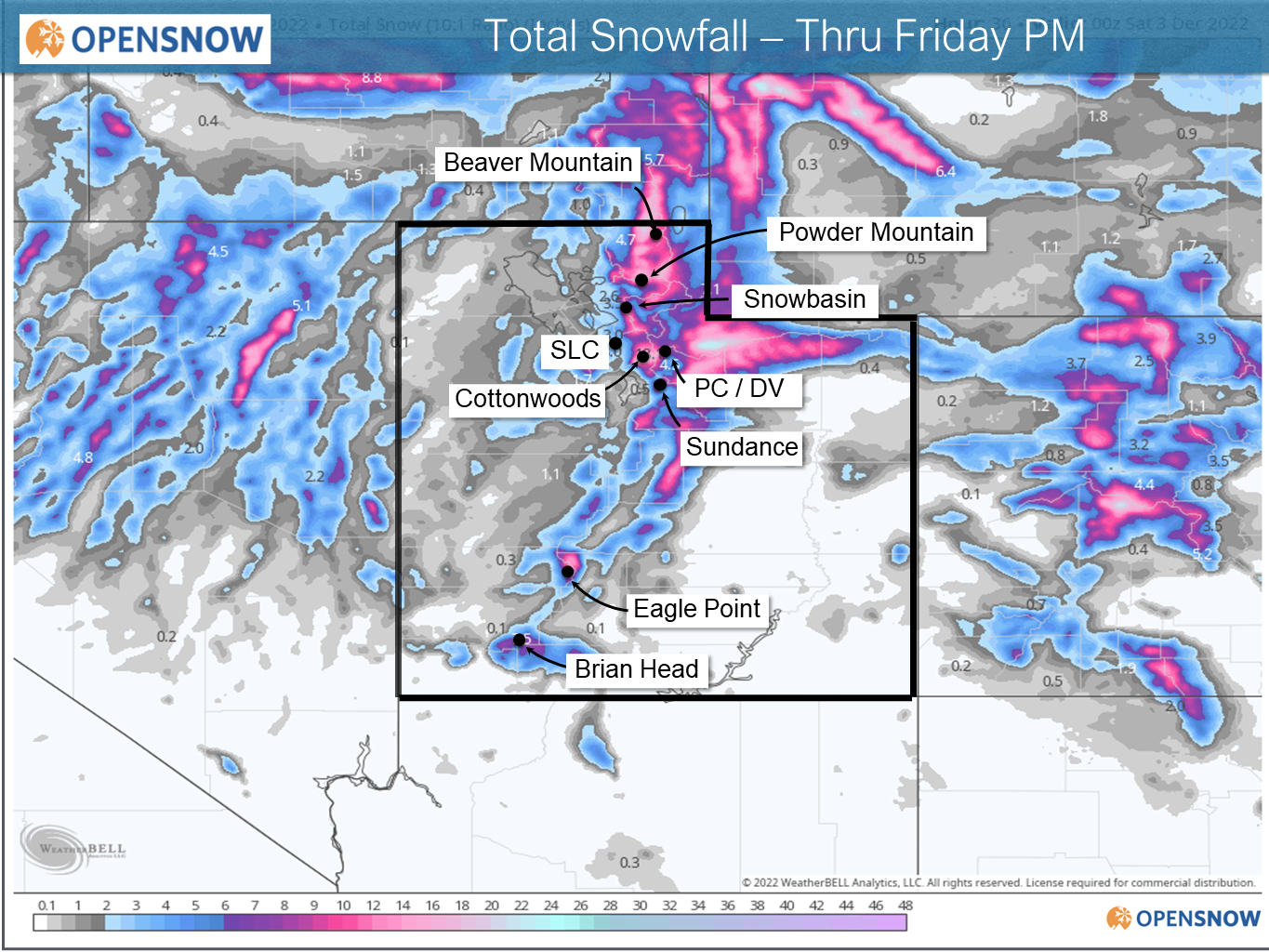 As for the riding, the storm is going to take place almost entirely during hours in which lifts are closed. It will start off denser and windy but should fall as fluffy on top. Friday should be a perfect powder day for first chair. Take a second right now to close your eyes and think about all the mistakes you've made in your life. This could take a while... Once you're done, open your eyes. Don't let missing tomorrow's powder be another one of those mistakes.

We should clear out later on Friday with a break in the action on Saturday.

The next storm will arrive late on Sunday. Winds will crank again leading up to this. This system is a bit warmer and while it has good moisture, we may not have the SLRs to help us with accumulation. Still, high elevations should see snow Sunday night into Monday and accumulations should be decent. Monday should be another fun day, if perhaps a bit on the creamier side. Total liquid amounts between these two storms like good: 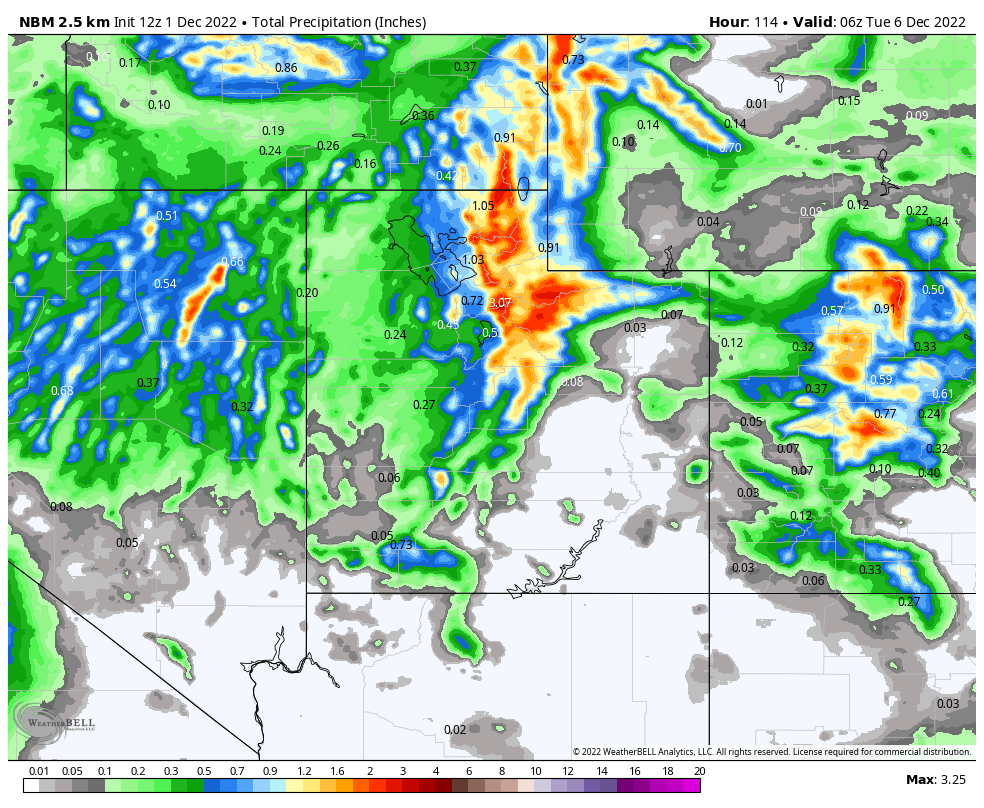 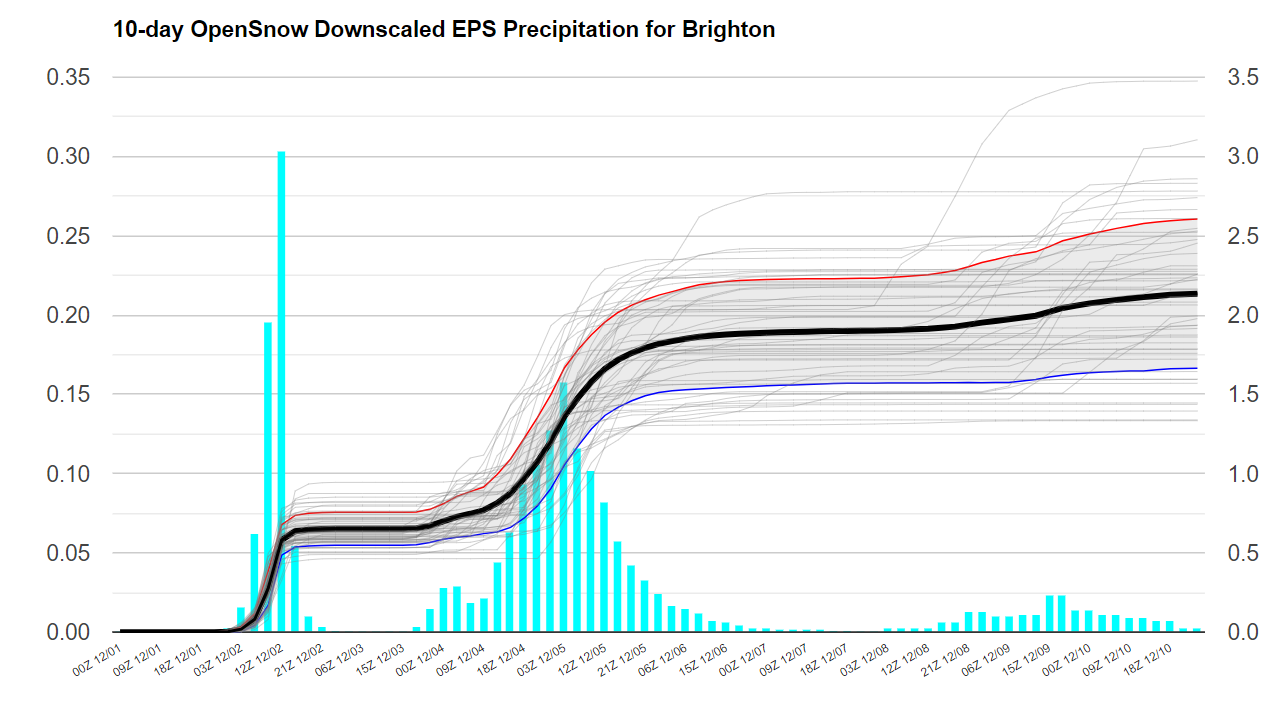 At the very least, this will continue to boost the snowpack!

Speaking of snowpack, it is December 1. That means it's time for our monthly look at the numbers. I'm not going to dive in too deep today because early season numbers are a little less meaningful at individual sites because they can easily be skewed. But, the overall state looks good with most basins above normal: 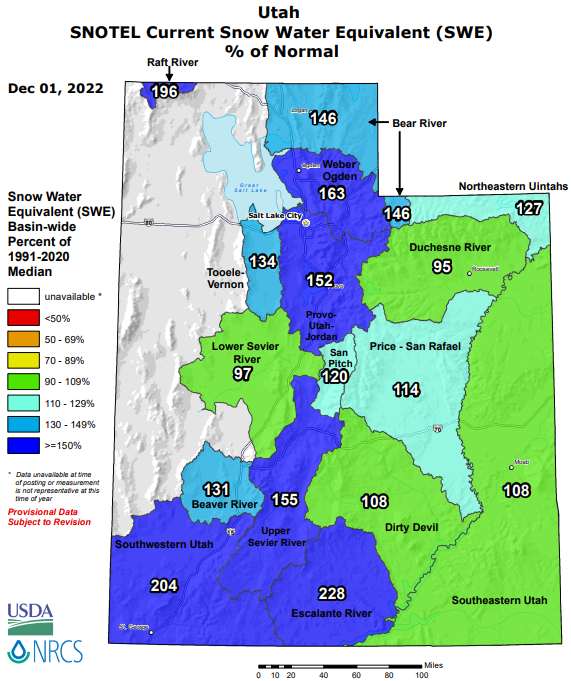 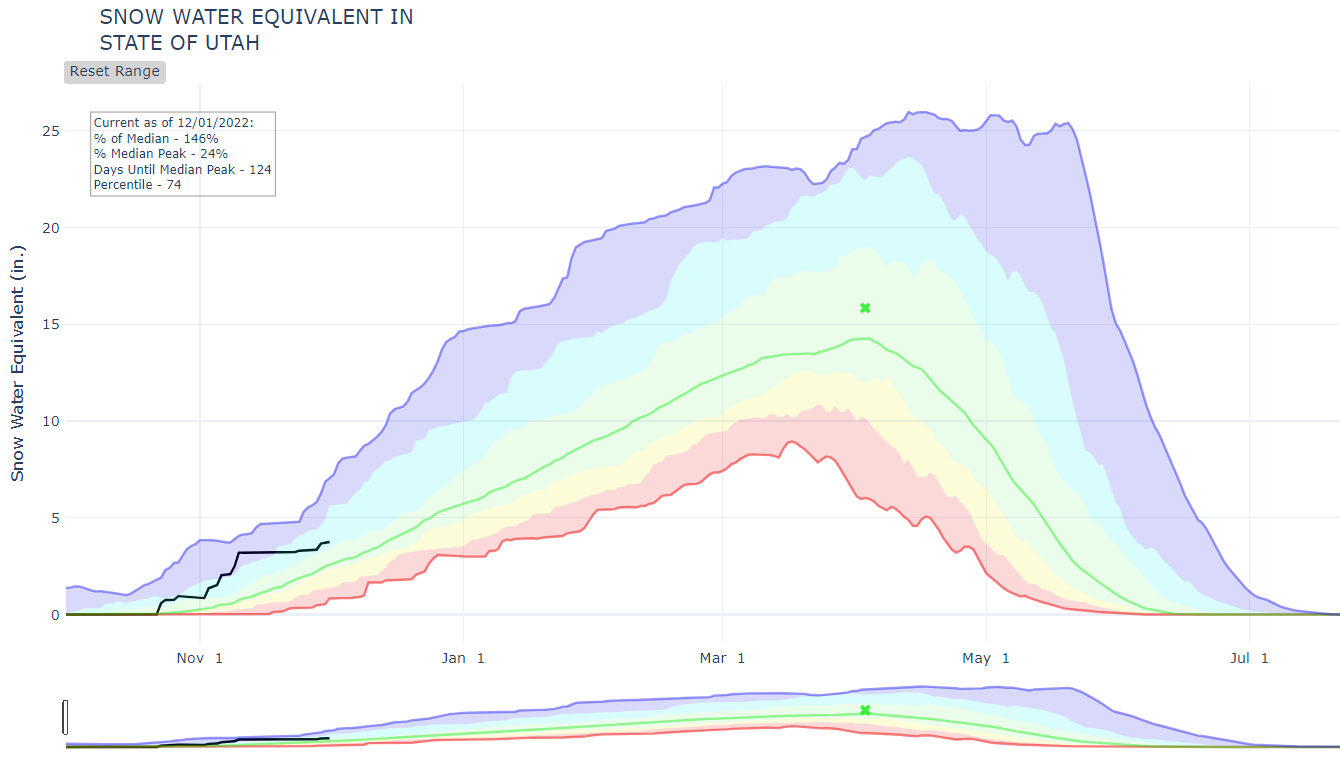 We don't have the insane numbers we did in early November thanks to our two-week dry spell, but we are still well above normal and the snow is deepest in the places that are most important. Two storms in the next 5 days will boost these numbers further. It's all good news.

As for the forecast after early next week, it seems like we are going to dry out a bit. We could get some scraps later next week, but then models have latched onto an idea of a western ridge. This was not shown yesterday but now it's in both the Euro and GFS long-range ensembles. That means we could be dry through the middle of December after next week. We will continue to watch and monitor.