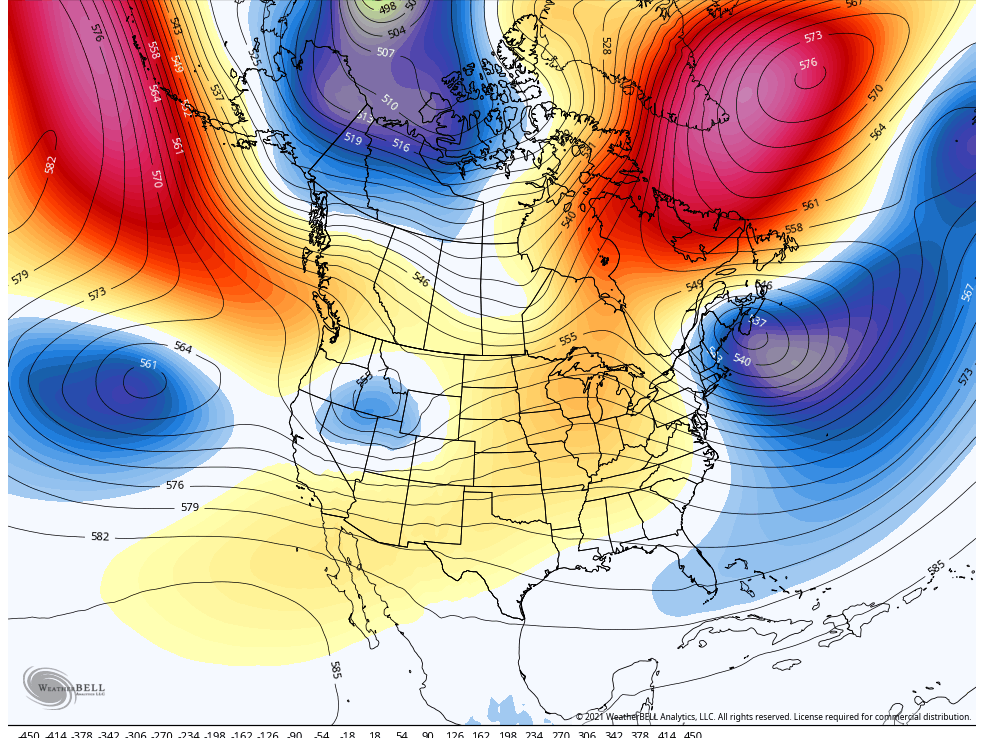 Sunny & mild through Sunday. We cool down Monday with the chance for a scattered shower or two. Sunny again for Tuesday - Wednesday. We could see another system move in with precipitation later next week.

A new season of adventure brings endless stoke – claim your Ikon Pass with up to $100 off in renewal discounts and a savings of up to $200 in child passes. With a payment plan as low as $100 down and 0% APR and pass options starting at just $399 adult – now is the perfect time to score your season of stoke. SHOP 21/22 PASSES.

The sunny skies and mild weather will continue through Sunday. Highs in the 50s to near 60 degrees at lake level. We could see gusty southwest winds Sunday of 40-50+ mph over the ridges.

We finally have an agreement among the forecast models with the Monday system. It is what has happened with most systems this season, the wetter models have joined the drier models...

What looked like a deep trough digging into the West Coast on Monday on earlier model runs this week has now shifted to a splitting trough. 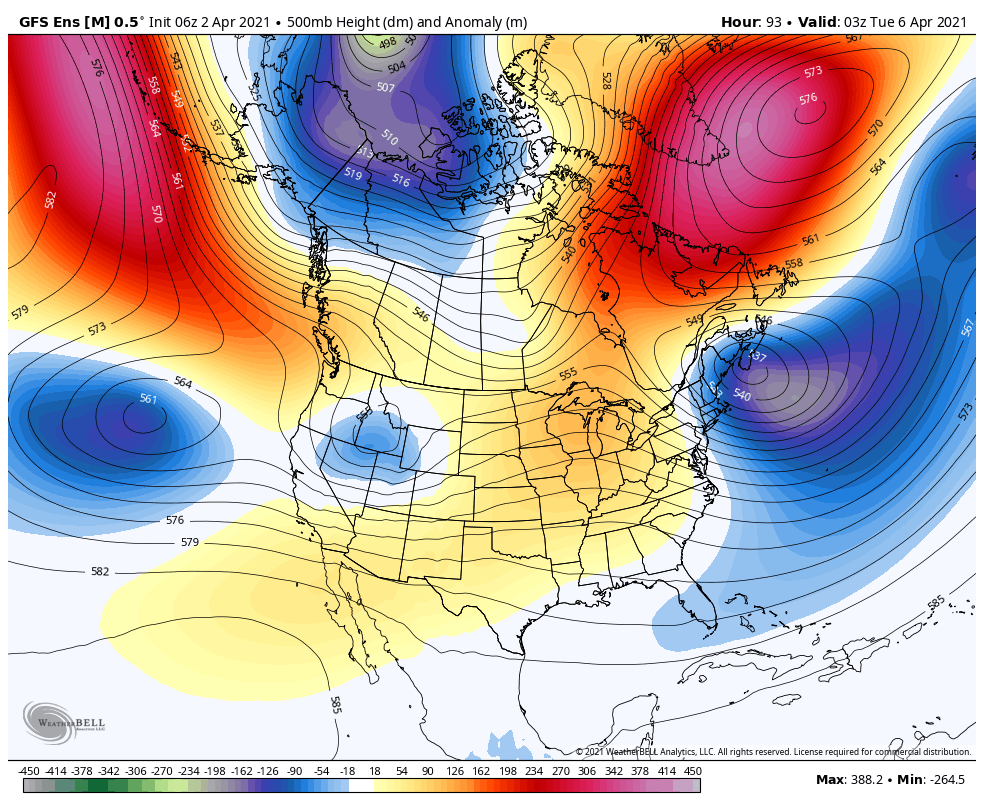 One piece becomes a cut-off low sitting well off the coast and the other is a weak trough that moves through to our north and east. 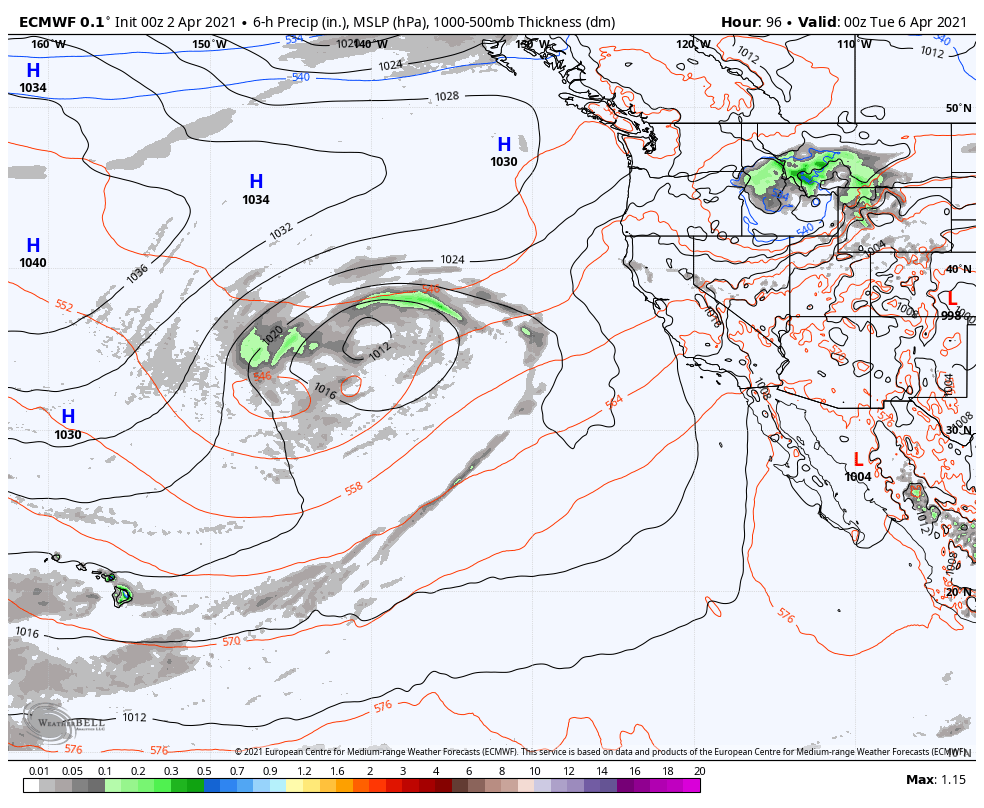 The consensus now is that we will see less cold air and less precipitation. The GFS & ICON models were still wet yesterday with a few inches of snow. This was the WPC's blended model forecast for precipitation. 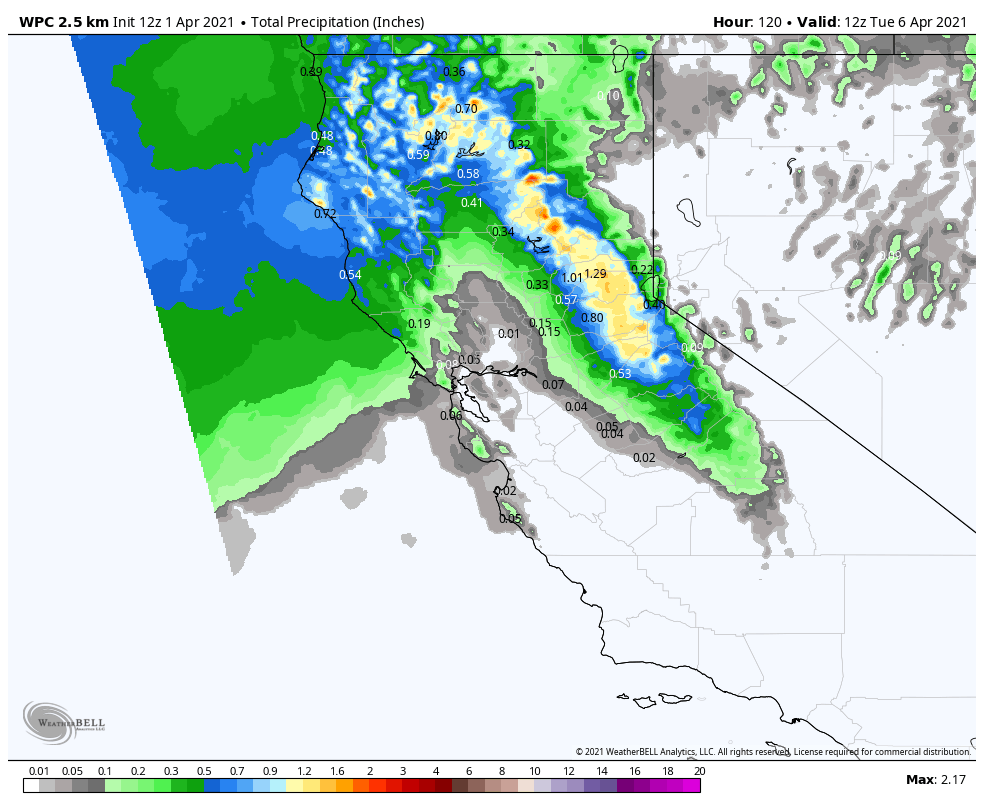 Here is the same model this morning... This is disappointing as we are now using the new upgraded GFS model that blew it on this storm 4+ days out while the European & Canadian models saw the split much earlier. 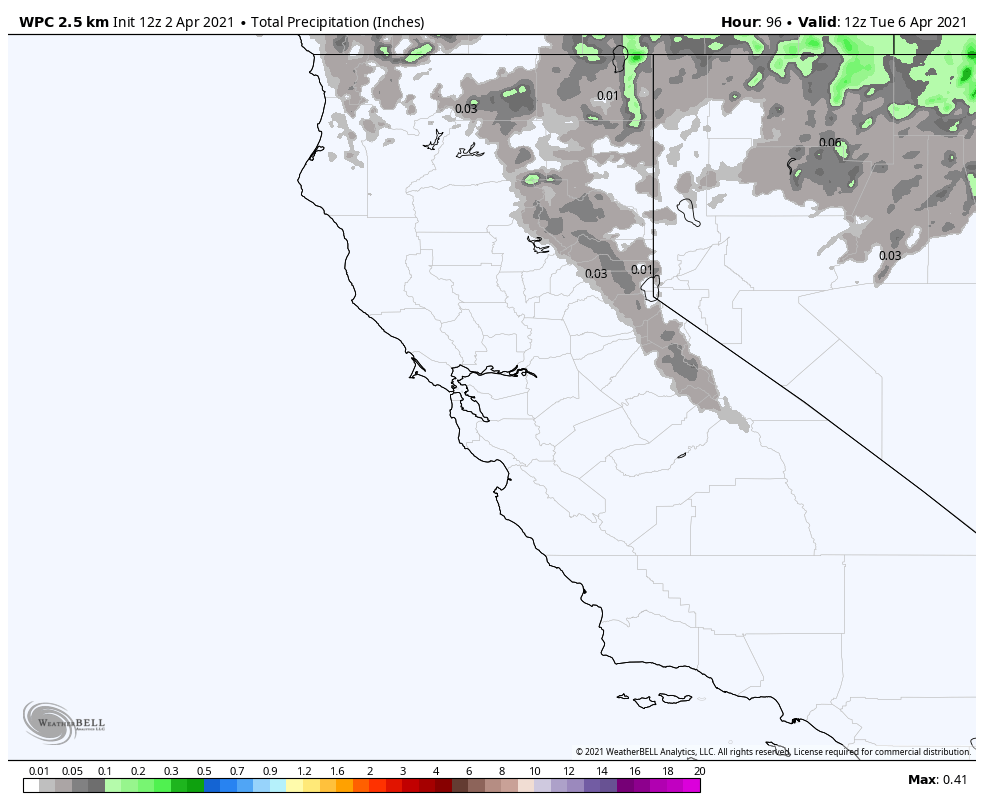 Highs drop into the 40s with 30s above 8500 feet for Monday. We will likely see some clouds and sun along with gusty winds. Ridgetop winds of 50-60+ mph.

We could see a few scattered showers but with the trough splitting and not digging as far south the snow levels could stay above 8000 ft. So now only a dusting at best above 8000 ft. is the forecast for Monday into Monday evening.

The sunny weather is expected to return Tuesday into Wednesday. Highs warming back into the 50s and 40s above 8k. Lighter winds expected.

A deeper non-splitting trough could dig into the West Coast later next week. 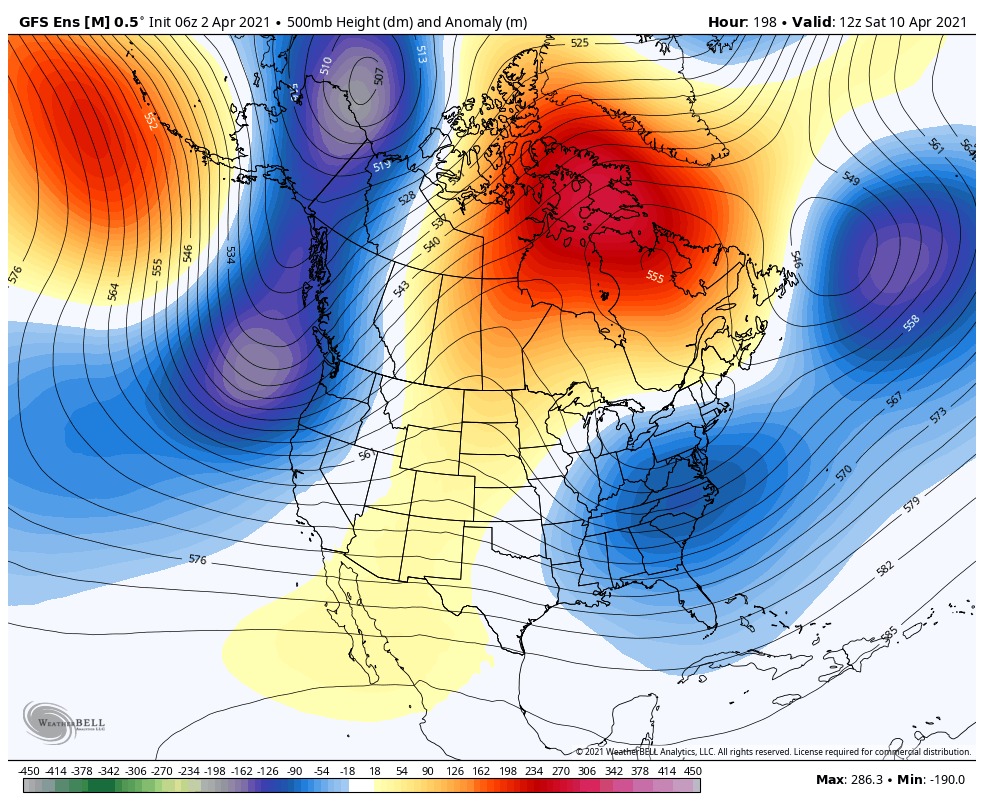 The European model shows a storm moving into northern CA as early as Thursday into next Friday. 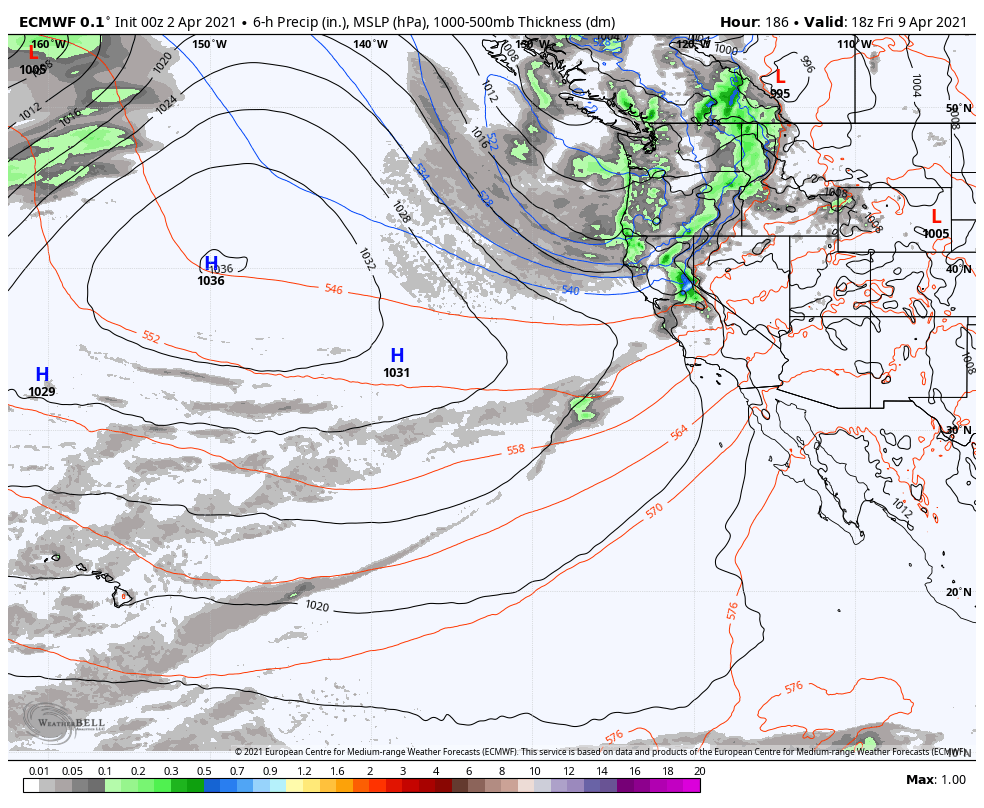 The GFS model is slower with the system moving in later in the week, with some runs showing a closed low developing off the coast and not moving inland until Saturday the 10th or later.

Overall the pattern looks to remain progressive with no heat waves and the chance for precipitation from the 8th-11th. Here is a look at the European ensemble mean model for total precipitation over the next 10 days. 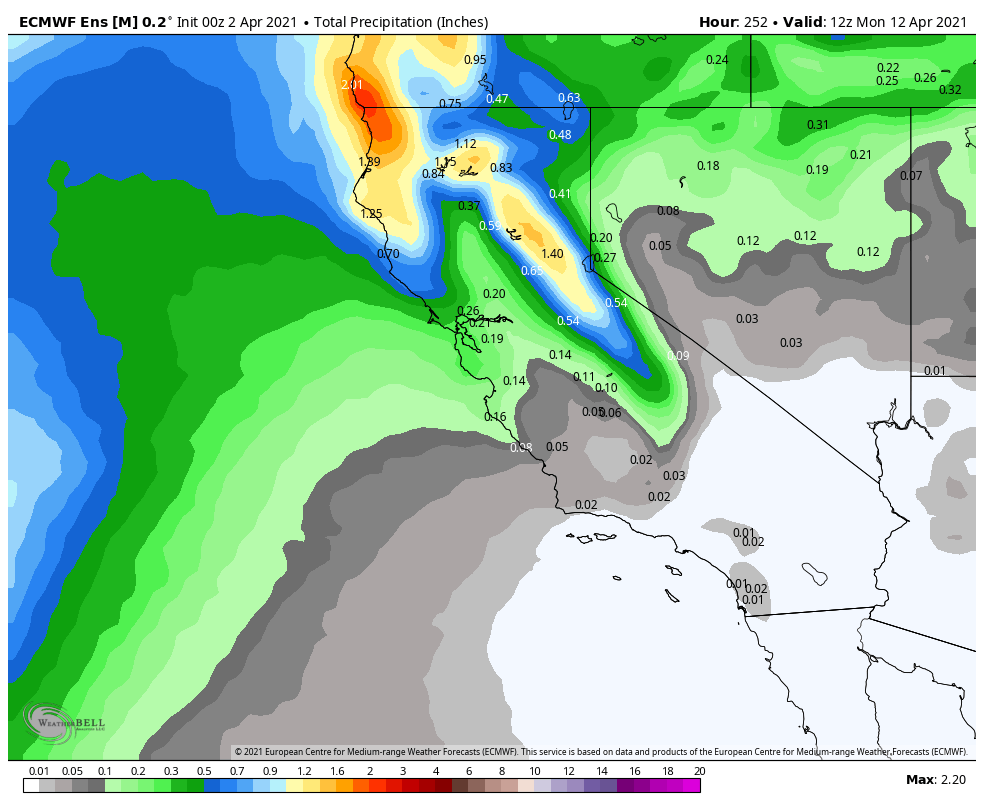 We will continue to track the trends on the late-week system.

The long-range models continue to show troughing around the West Coast through mid-month. 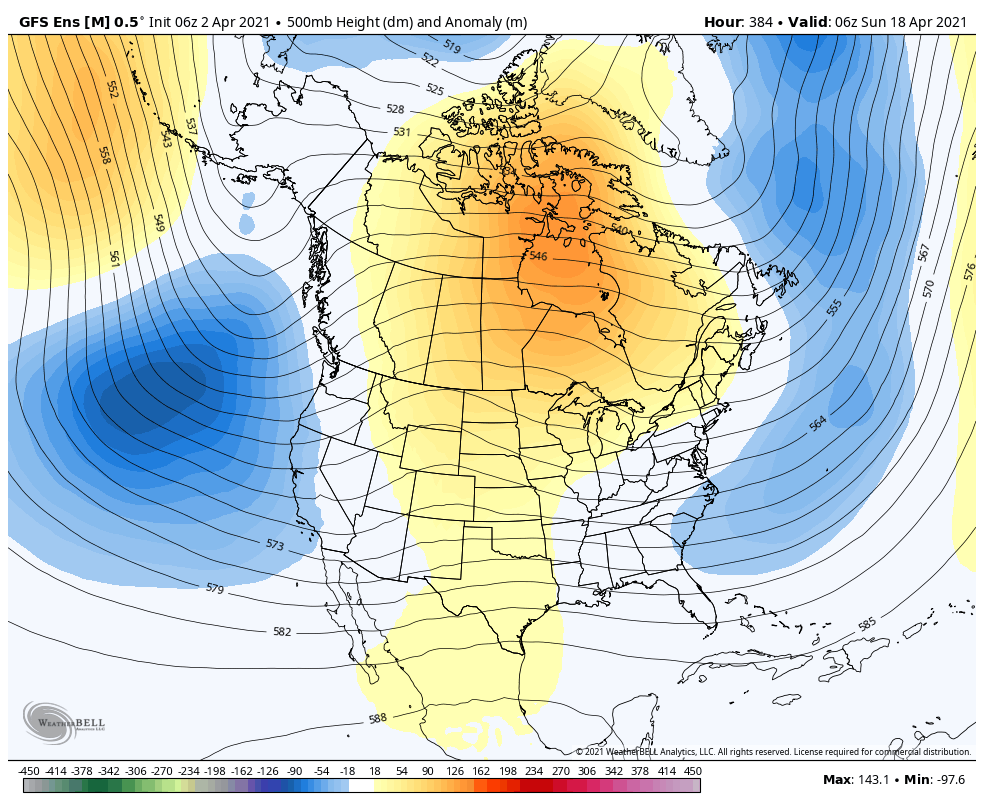 The pattern could remain progressive with the storm door remaining open. The problem is that in April we have weak systems and usually lots of cut-off lows that have a mind of their own and are very hard to forecast.

For now, the chances remain for a little fresh snow on the mountains over the next 2 weeks, but no confidence in any measurable snowfall until we get a storm within the 2-3 day window, down from the typical 5-day window during the winter...

On this week's episode of The Flakes Podcast, we talk to Lisa Nigon from Homewood Ski Resort about backcountry skiing, the season, and the transition to Summer Operations. Plus the usual snowfall & forecast discussions...