A Few Clouds, A Little Wind... 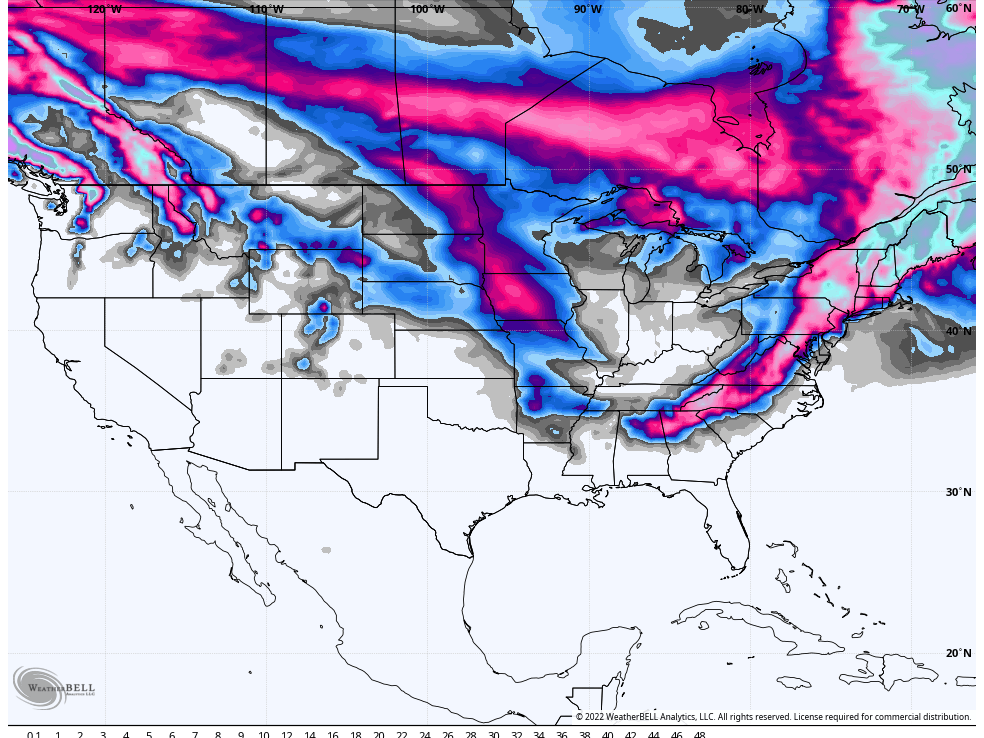 Partly - mostly sunny for the next 10+ days. A few clouds are possible at times as weak systems fall apart as they move through the region. The pattern could begin to shift during the last week of January. Let's take a look at the progression and when storms could return...

High pressure is sitting over the region blocking storms and bringing overnight inversions. We have temperatures in the teens again Tuesday morning at lake level and temps in the 30s above 8000 ft. 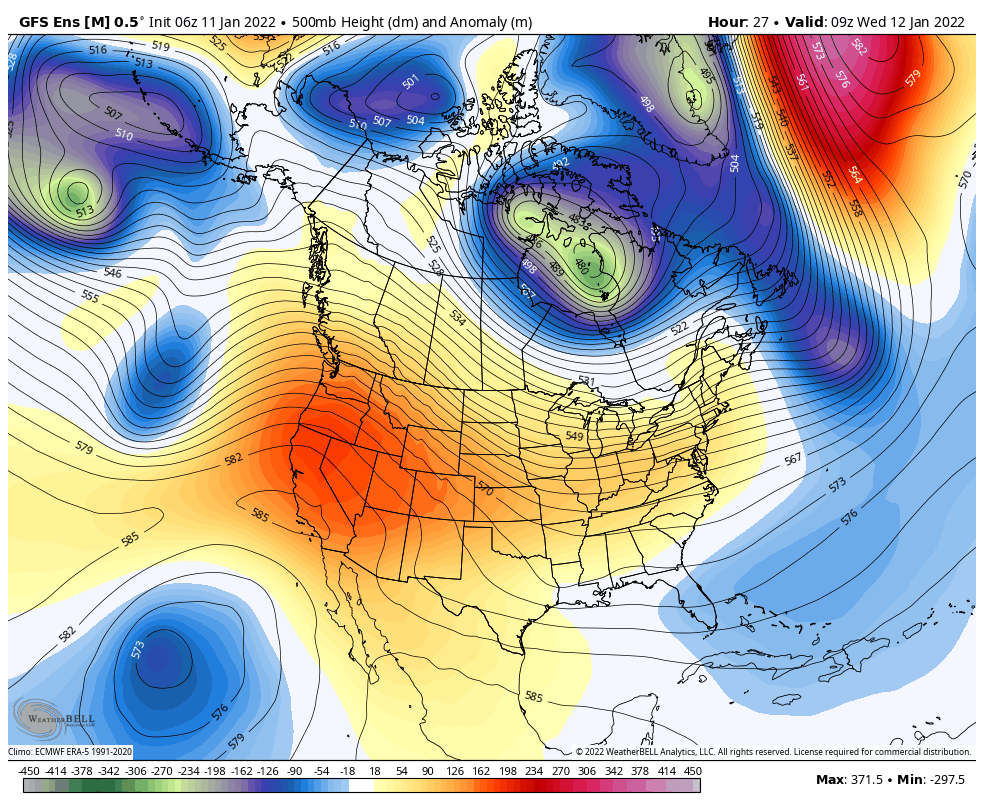 Although the ridge is blocking storms it doesn't mean we won't see some clouds as they weaken and move through to our north. Here is a look at some high clouds streaming into the northern Sierra Tuesday morning.

The weak and dry cold front that moves through Thursday will drop highs back into the 40s at lake level and 30s on the upper mountains through the weekend, and into early next week. We will see some gusty southwest winds turning northwest Thursday with ridgetop gusts up to 40+ mph. Then turning east-northeast Friday with gusts up to 30+ mph.

We continue to live here in the Extended Forecast section looking for signs of when storms will return. By the middle of next week, the ridge is forecast to be centered just off the West coast instead of over the West. 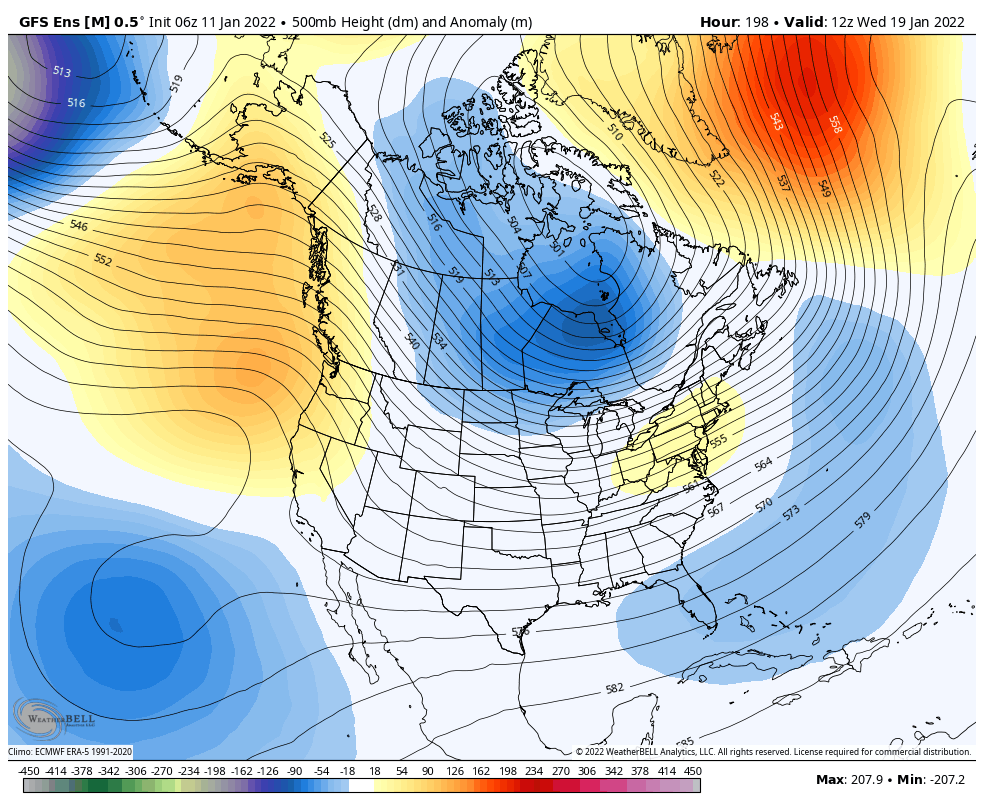 Until then, over the next 7 days, we will see below-average precipitation for the West Coast and most of the Western U.S. 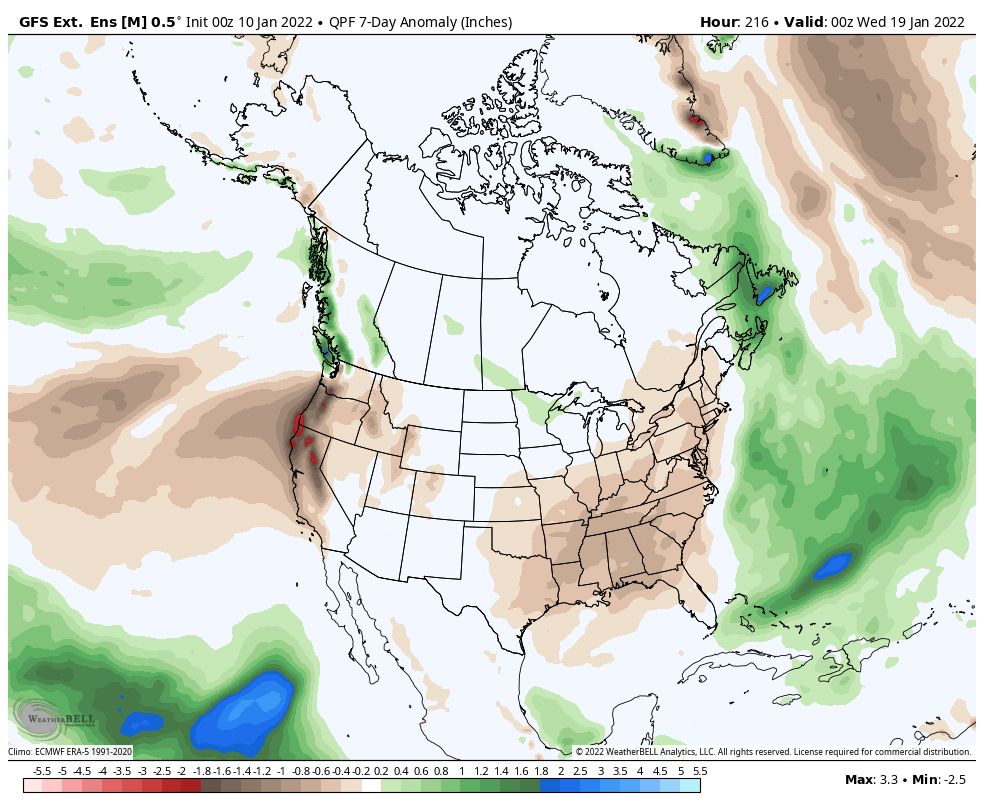 If you are looking for fresh snow to ski you'll need to head to far northern Idaho & Montana, the upper midwest this weekend, and the northeast early next week if the coastal storm develops as forecast and brings heavy snow to the northeast. 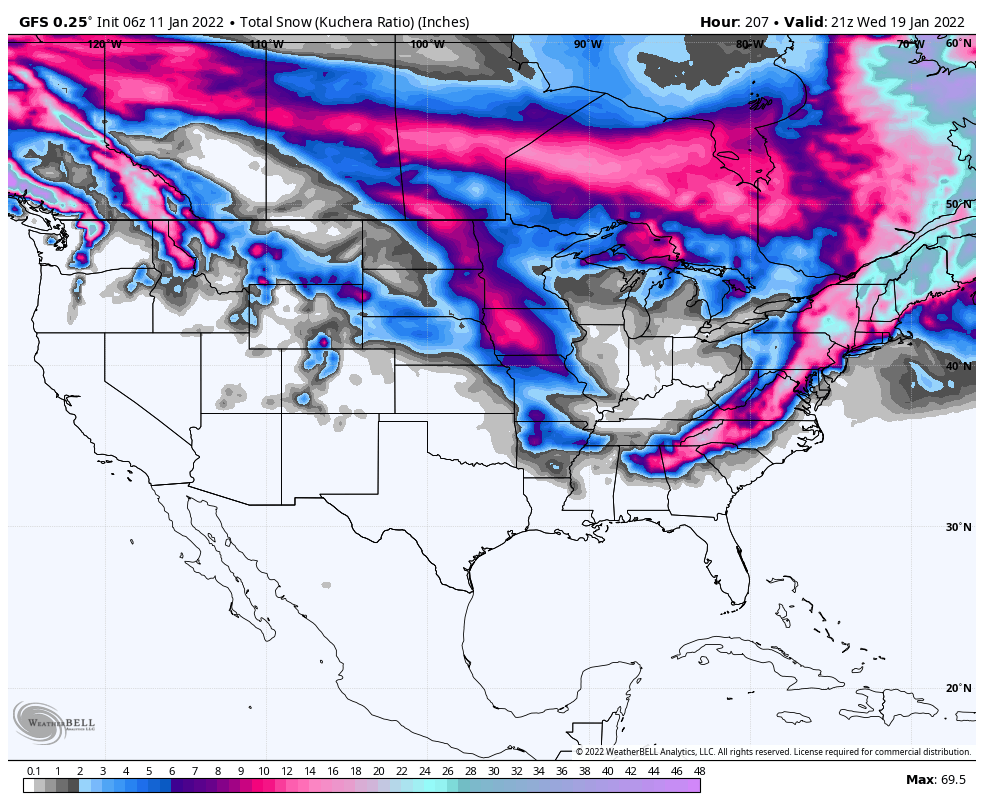 Speaking of the Upper Midwest, we talk with our Midwest forecaster Croix Christenson about the snow falling there and the best ski resorts to ski in the latest episode of The Flakes Podcast, it will be out later this morning. You can find it on most podcast platforms & I'll post the link at the bottom once it's released.

Once the ridge sets up off the West Coast it should open up the storm door for the Rockies for storms moving south out of Canada. For CA we likely stay dry through at least the weekend of the 22nd.

By the end of week 2, around the 26th, the ridge is forecast to shift farther west off the coast with the highest heights shifting up towards the Gulf of Alaska and Alaska. 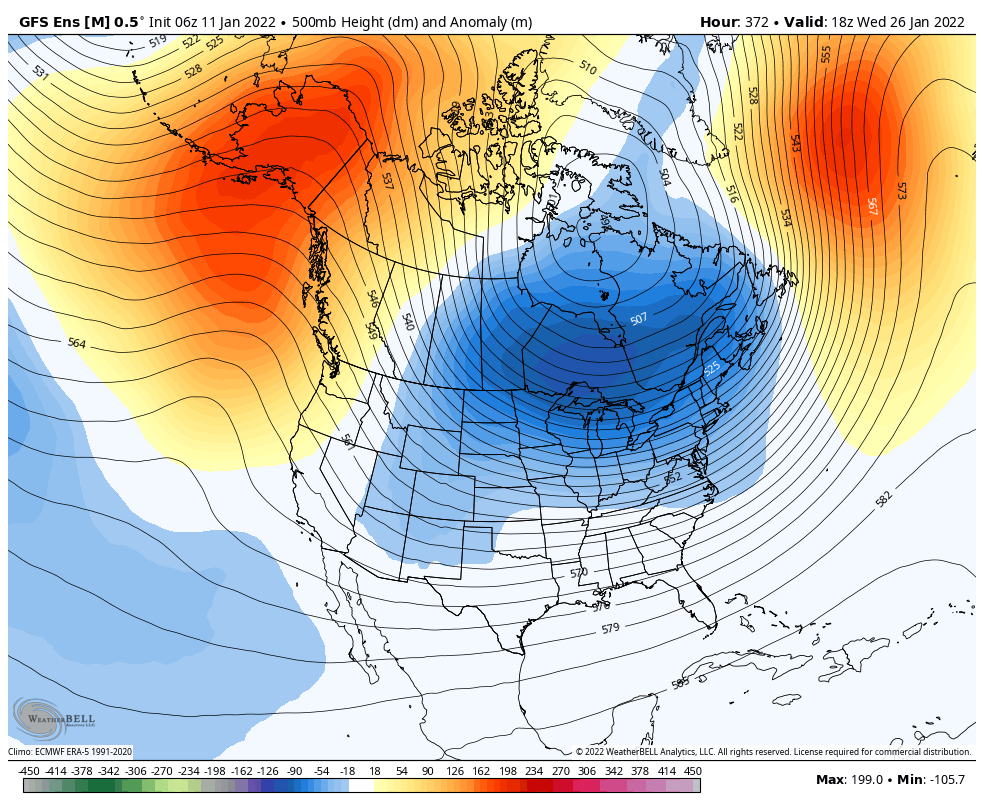 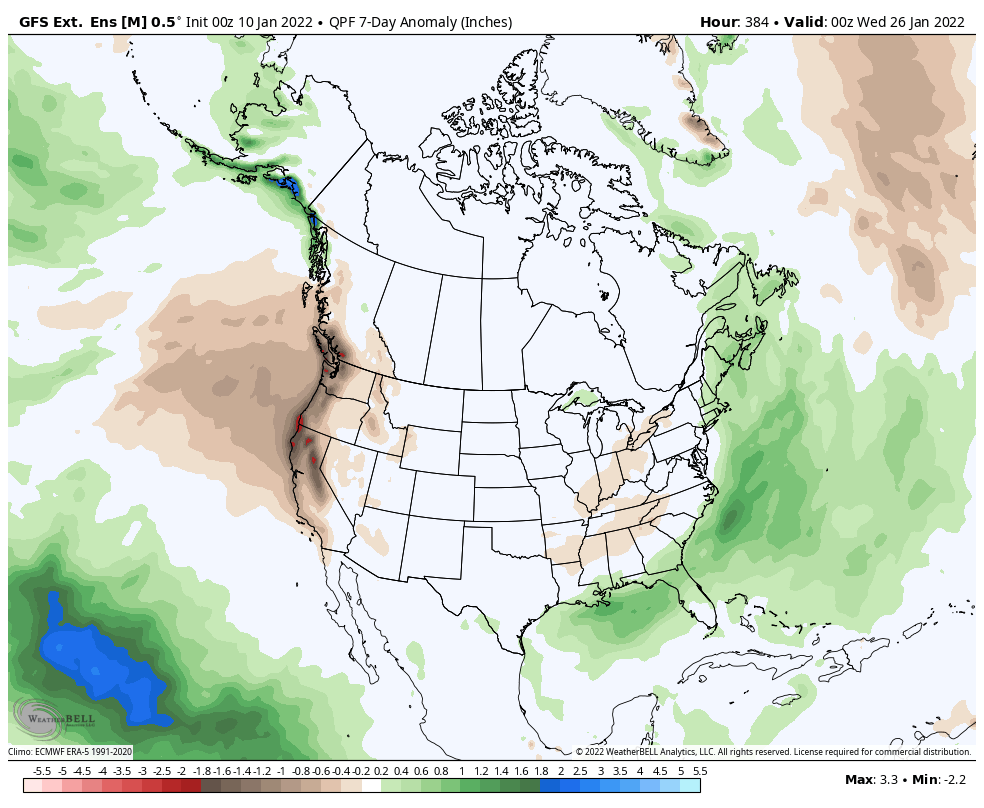 As the ridge shifts farther away from the coast it may shift far enough west by the end of week 2 for cold/weak systems moving down from the north to track far enough West to brush the Sierra with some light snow. The GFS model this morning is showing an inside slider system doing just that around the 24th. 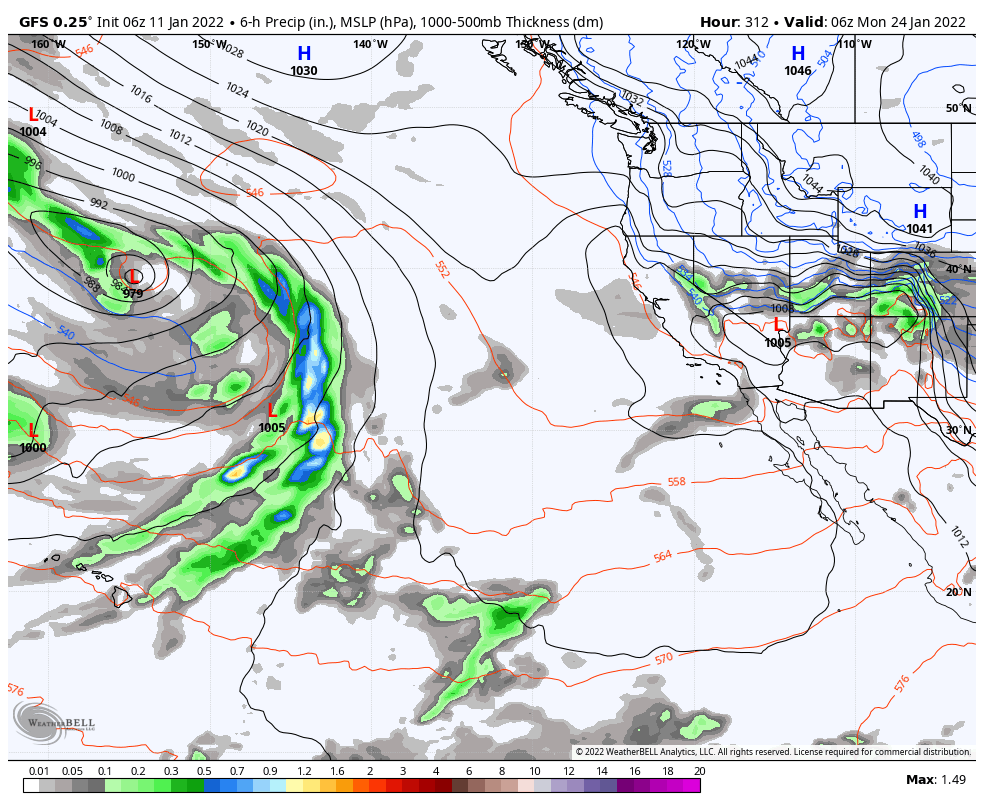 This far out this is not a forecast for a storm, it's just showing what the pattern could produce if the patterns forecast pan out with the timing shown on the latest model runs. Here is a look at the latest GFS model forecast for snowfall through the 25th showing the snow returning to the Rockies week 2 and snow for most of the U.S. over the next 2 weeks. 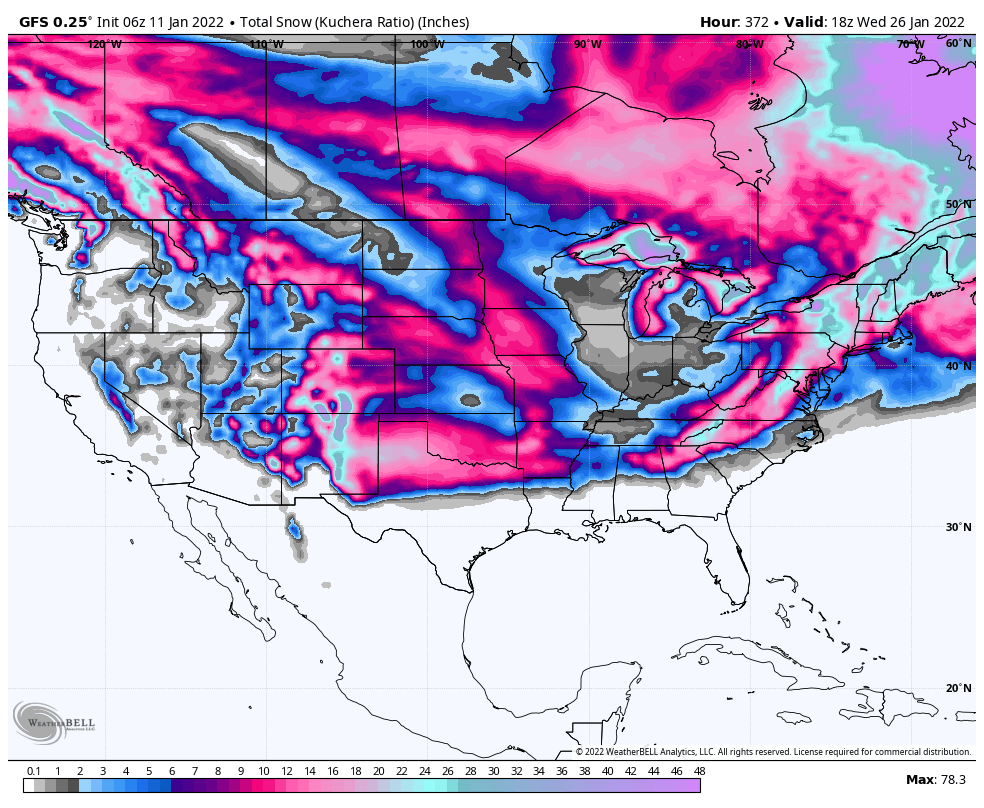 It looks like the only state in the lower 48 not forecast to receive snow is Florida. The light snow in the Sierra would be if we see an inside slider system track far enough west by 25th. But not much confidence CA sees snow over the next 2 weeks right now. We'll keep an eye on it.

We will keep watching the long-range trends to see how far northwest the ridge will shift later in the month. If it shifts far enough north by the last week of January we could see storms move into CA. The latest GFS model run is showing storms undercutting the ridge with a fairly strong jet stream across the Pacific trying to nose into CA by the 26th - 27th.

The GFS model has been flirting with this every few runs or so. The European and Canadian deterministic models only go out 10 days vs the GFS model that goes out 16 days. So this is beyond their range still. That's probably a good thing because model accuracy tends to drop off a cliff by the time you get to 10 days.

We were already technically in the "Fantasy Range" once we were beyond 10 days, but since we are going so far out looking for storms I'm shifting the farther out today. But anything beyond 7-10 days is just an outlook looking at potential weather patterns and not a forecast for storms.

The GFS extended ensemble mean model and the European Weeklies model both continue to show the ridge shifting farther northwest away from the West Coast through the end of the month, with a trough digging south over the West Coast going into the 1st week of February. 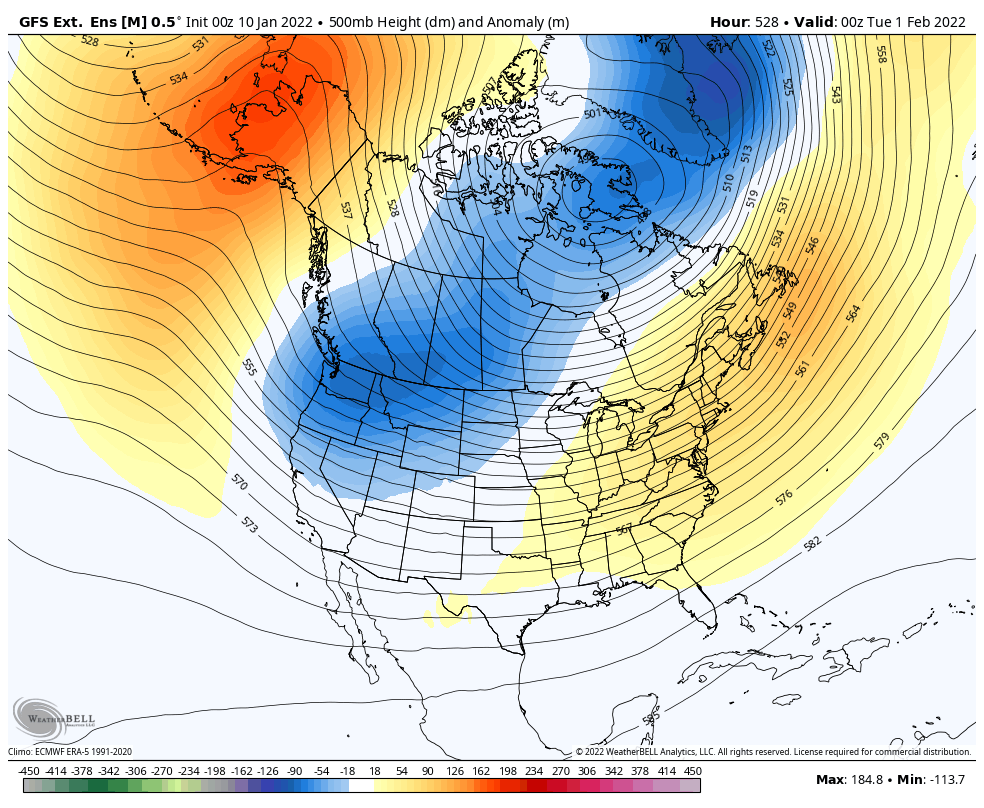 The GFS extended model shows near to above-average precipitation returning the last few days of January into the 1st week of February. 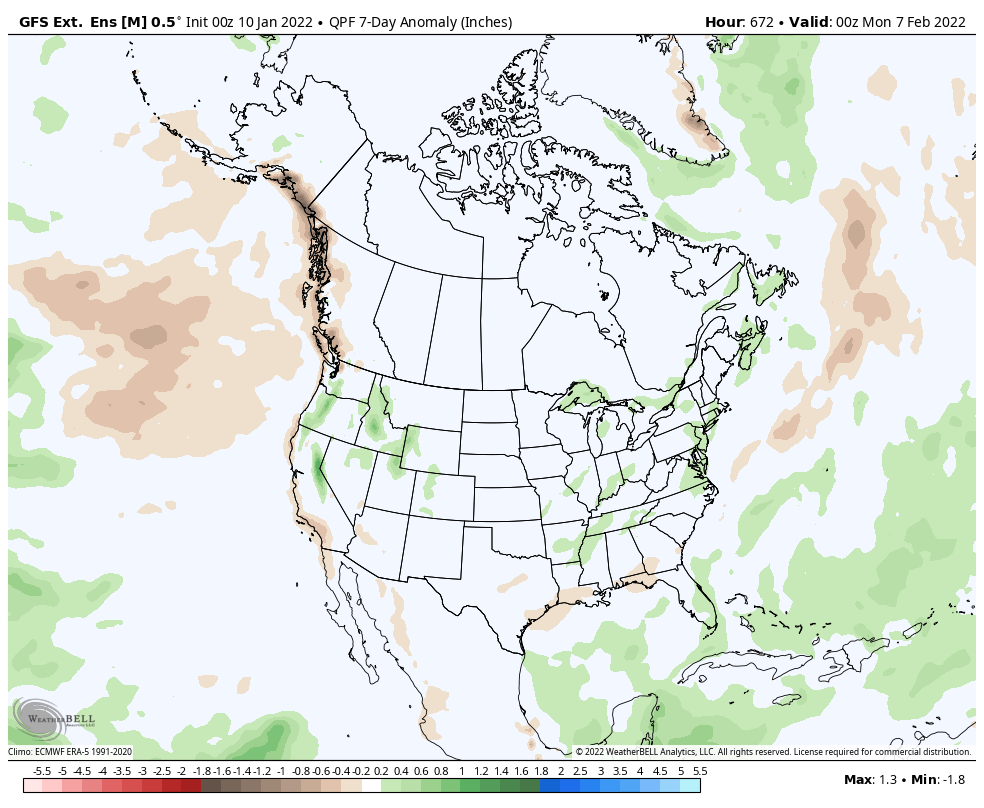 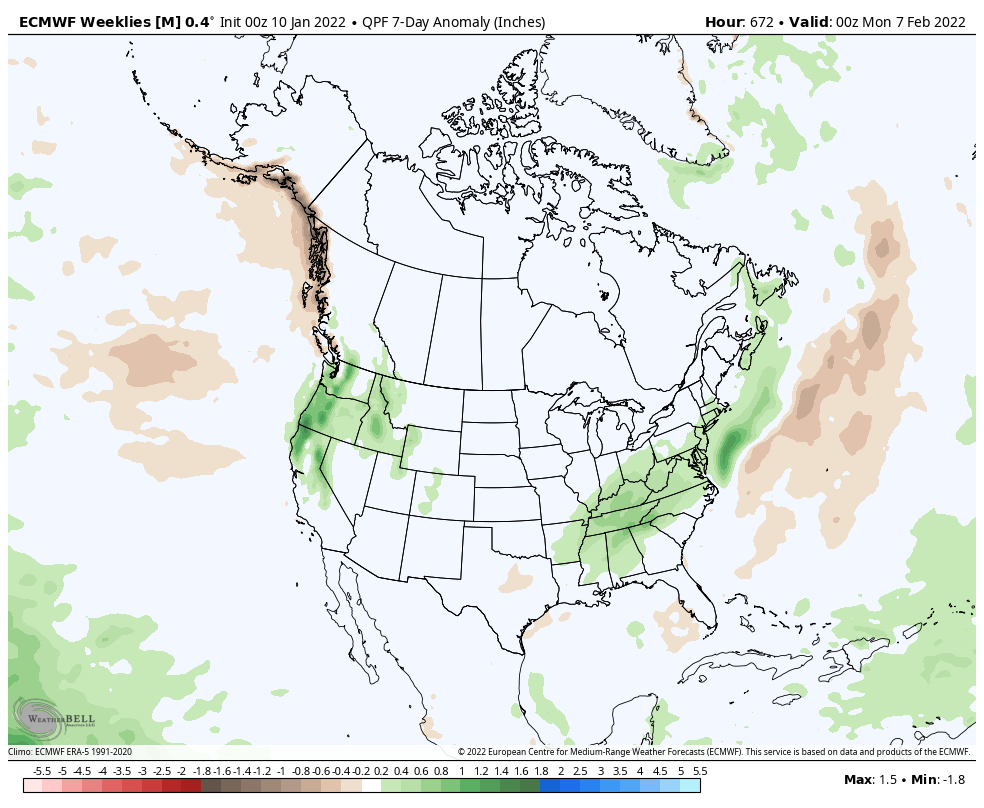 Hopefully, we will be reporting new snowfall numbers before the end of the month and then continuing into February...

A New Episode of The Flakes Podcast is Out!

This week Evan & BA catch up with Powder Chaser Steve on his adventures, talk with Croix about skiing the Midwest Nobs & Porkies, look at the 5-day Snowfall Reports, the 5-day Snowfall Forecasts, & the Extended Weather Outlook for the ski regions!