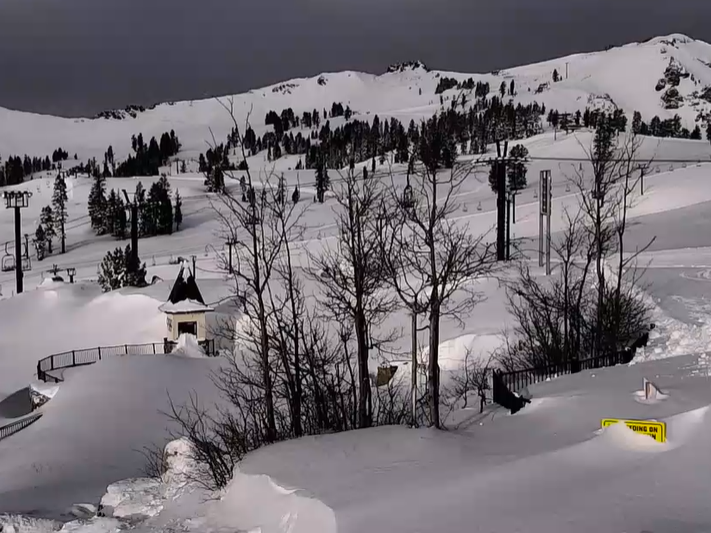 Partly sunny with scattered snow showers possible Friday. Nice weather for the weekend into Monday with sunny skies and warmer temperatures. Winds pick up Tuesday. A trough could bring cooler air by the end of the week and we could get brushed by a system to our north. The pattern may or may not stay a bit unsettled into the first week of May.

The NW side of the lake got hammered again with this storm. The Snow Lab is reporting 3.5" of total liquid! If you remember the total model average forecast was around 2" for this storm with a high-end on the GFS of 2.9". So we got the over and that equated to 31" of new snow!

It's hard to get a lot of snowfall numbers when all but 3 ski areas in the Tahoe region are closed. Palisades is reporting an additional 28 inches of snow in the past 24 hours which brings their 2-day storm total to 36" or 3 feet on the upper mountain! It's looking like mid-winter up there. 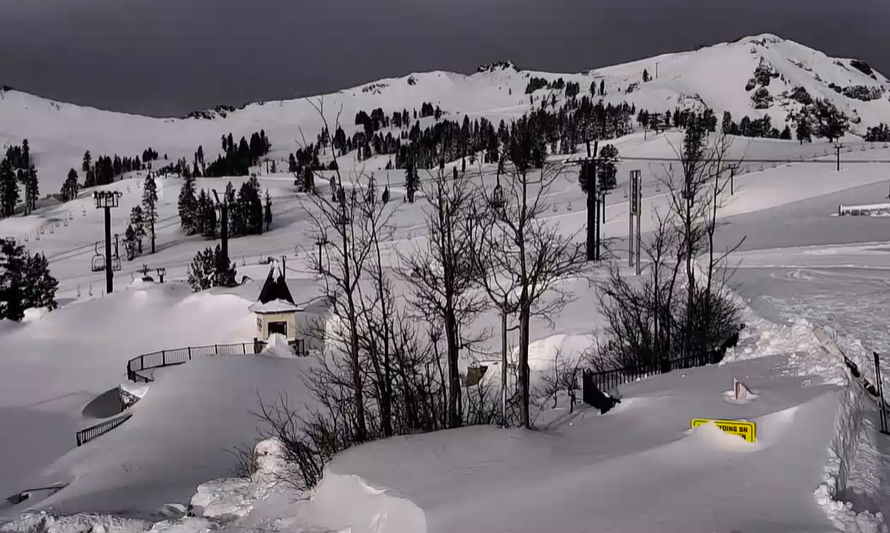 Kirkwood did well too with 24" of new snow in the past 24 hours and a storm total of 27". Heavenly on the east side of the lake picked up 14" with this storm. Here are the reports and you can see that most mountains have picked up more snow in April than Jan-Mar combined. 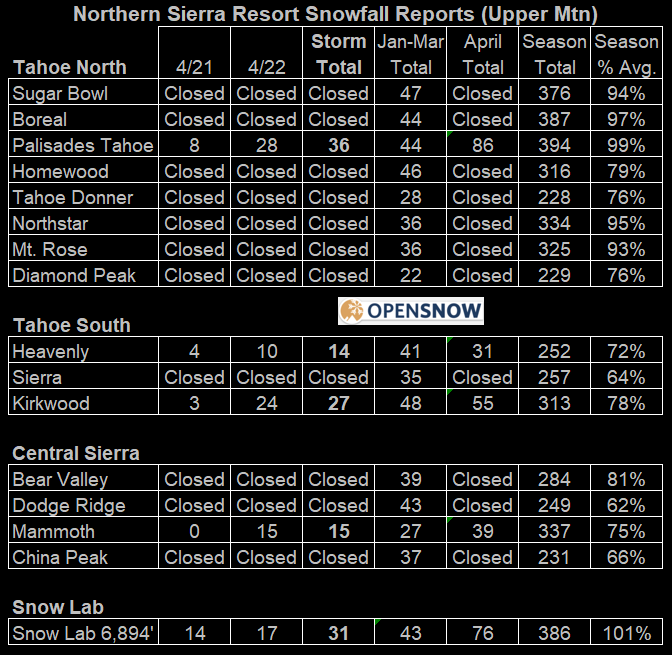 A couple of closed ski areas are reporting like Sugar Bowl & Homewood so I am adding that to their season totals. Palisades is just 6 inches shy of their seasonal snowfall average! At lake level, we have reports coming in of 5-20", with the highest amounts NW of the lake west of Hwy 89.

The 76" so far for April at the Snow Lab makes this the 7th snowiest April since 1970. It is also the 7th wettest. What is really amazing is that at 386" for the season so far, the Snow Lab is now above average for snowfall for the season at 101%, and we could see more by the end of the water year in September!

The snowpack, which measures the water content in the snow on the ground, jumped from 19% of average to 61% of average in just the last 11 days! The low snowpack shows the effect of the dry period we had this season with the snowpack melting away, but it's amazing to me that we are above average for snowfall!

For the forecaster transparency report card, my final forecast for this storm from Wednesday morning was close for most mountains, but I got blown out at Palisades in a good way! 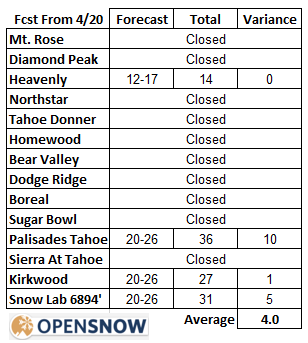 The winds have dropped off this morning and the sun is peeking out. It's cold with temperatures in the 20s. A beautiful morning for fresh tracks at the open ski resorts, but it may be crowded. 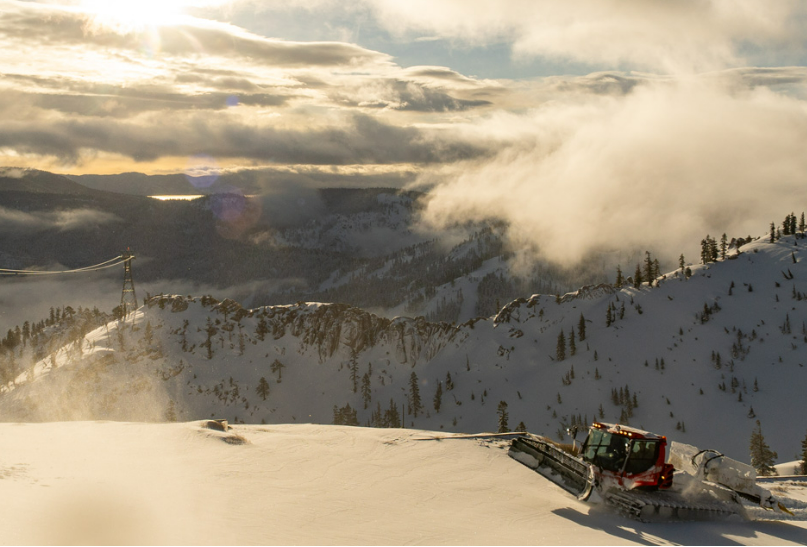 Be careful if you plan to hike into the backcountry for turns. You'll want to be trained, properly equipped, and with a group, or hold off until the snowpack stabilizes. The avalanche danger around the area today is Considerable. 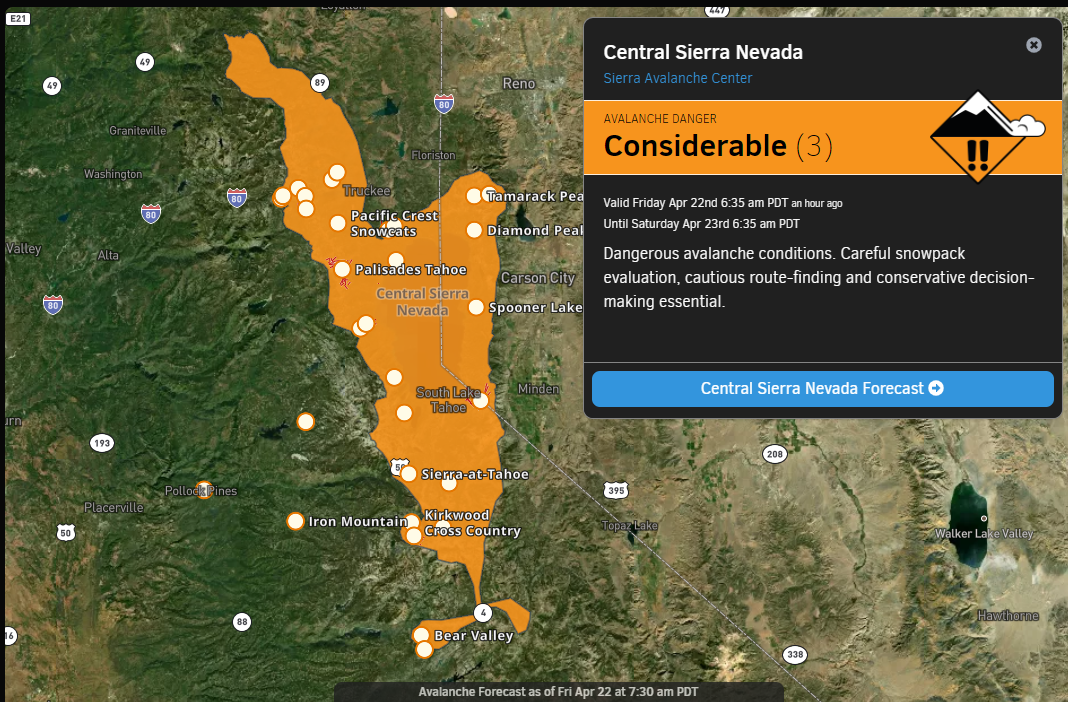 You can always get those forecasts on our Maps page with the Avalanch layer.

This is likely the last big snowfall of the season as spring will be returning, but we get to feel like mid-winter in April after feeling like April in mid-winter. Highs into the 30s today with lighter winds.

There is still a lot of moisture in the atmosphere and as the sun comes up and warms the air today we will likely see convective rain & snow showers popping up around the region through the afternoon. Snow levels between 6000-7000 ft. with a rain shower a possibility at lake level if snow levels rise enough.

The Weekend Into Monday:

High pressure builds in over CA through Monday. 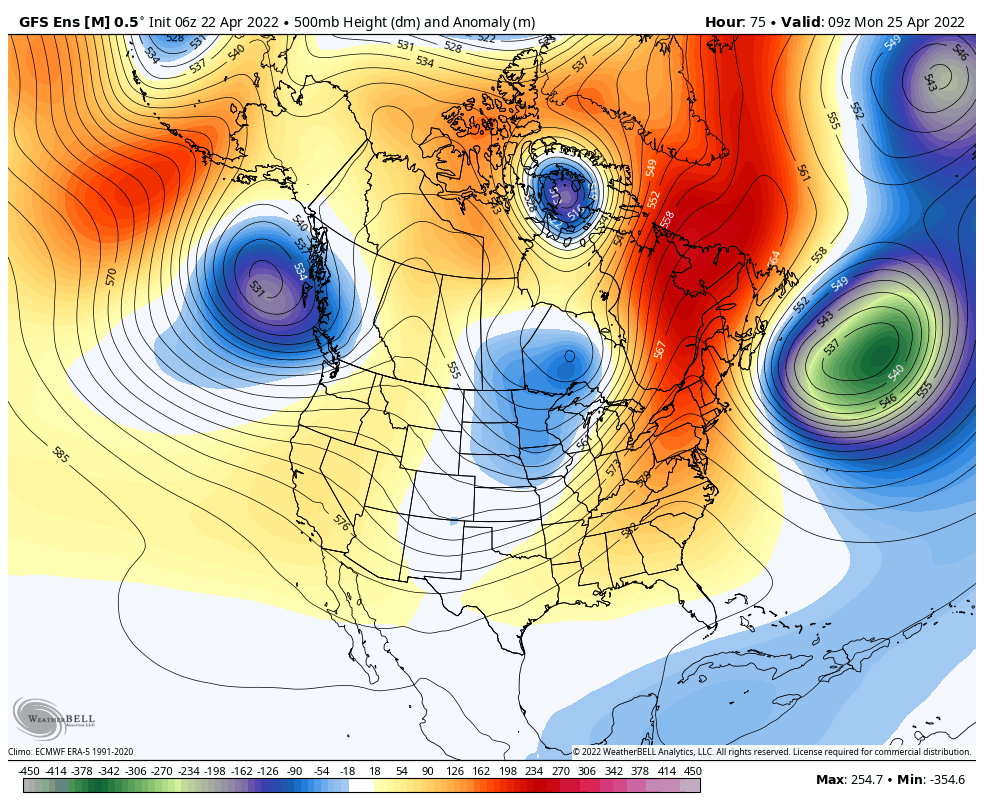 For the middle of next week, a trough is pushing into the Pacific NW and causing a tighter pressure gradient with high pressure to our southeast. 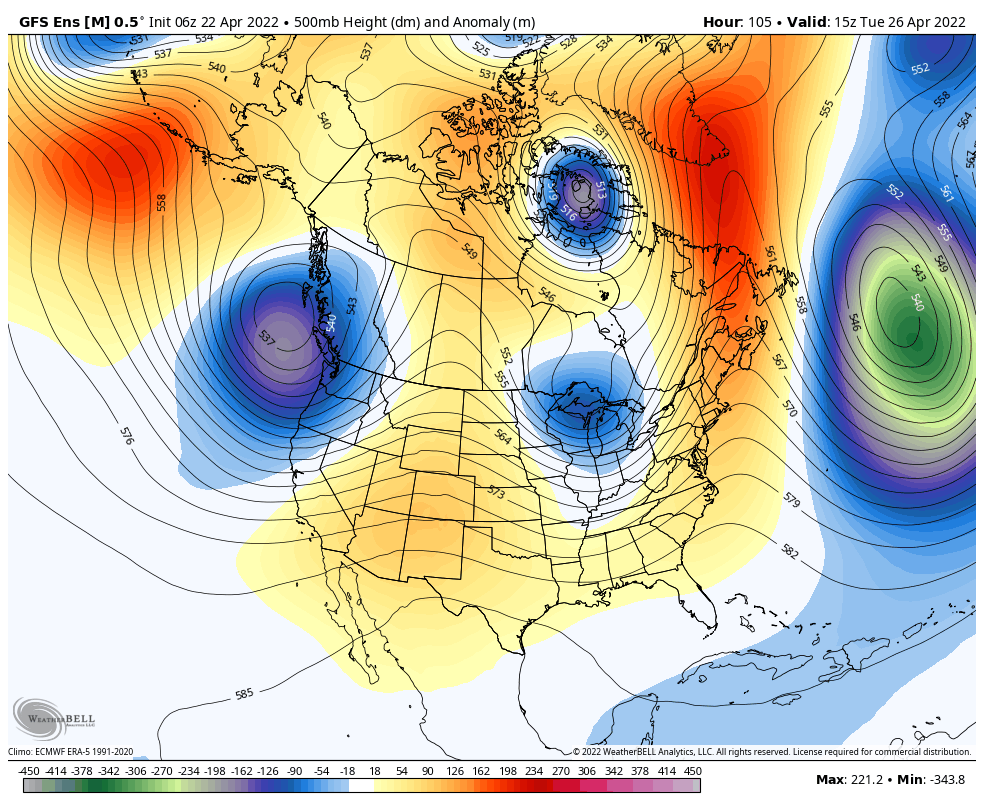 That will bring gustier winds for Tuesday into Wednesday. The sun should still be shining with highs into the 50s, but we could see ridgetop winds from the southwest gusting up to 80+ mph. That could close some upper mountain lifts. The winds may come down into Thursday.

By the end of the next week, the long-range models continue to show a trough digging into the West. 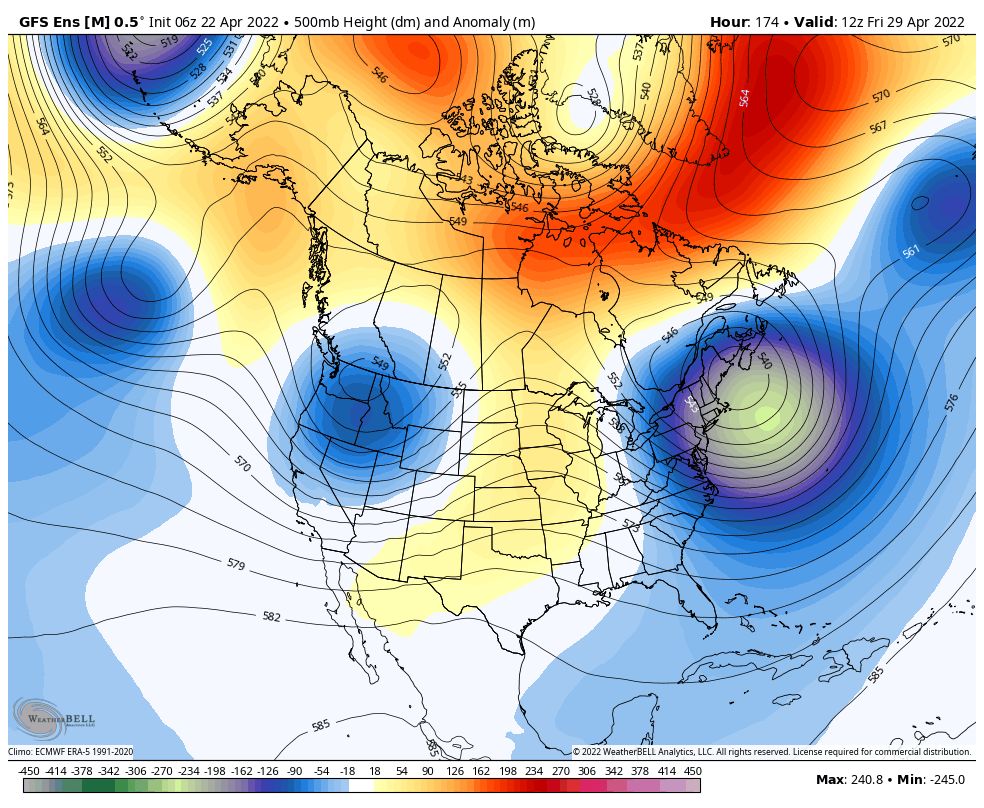 The storm track still looks to stay to our north into the last weekend of the month. But we may cool a few degrees and we could get brushed with showers as the latest European model runs shows. 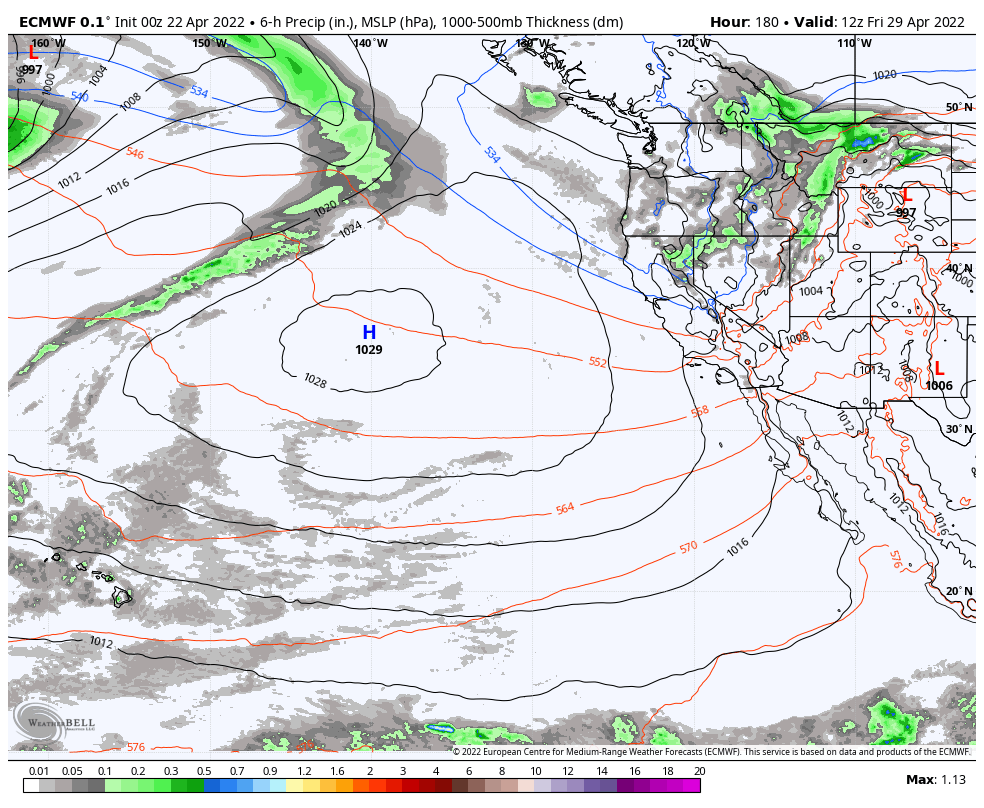 The long-range models are still split on how long the trough could hang around through the first week of May. The GFS model was the one showing a storm or two but now it's drier. The European model was the drier model but now shows a storm possible around the 2nd. 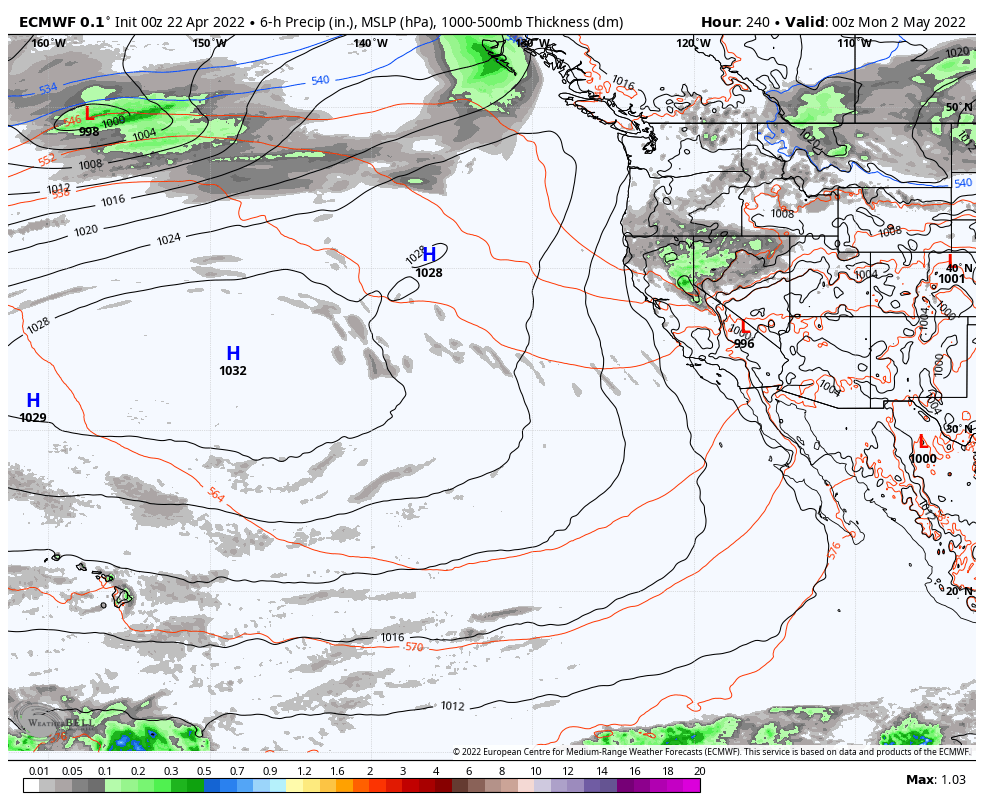 We'll continue to watch the trends to see if the mountains could pick up any late-season snow to add to the season totals. It would be cool to see Palisades also get to average/above-average snowfall for the season along with the Snow Lab... 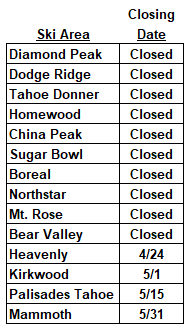 Always check for the latest updates on each ski resort's own website in case of changing dates.