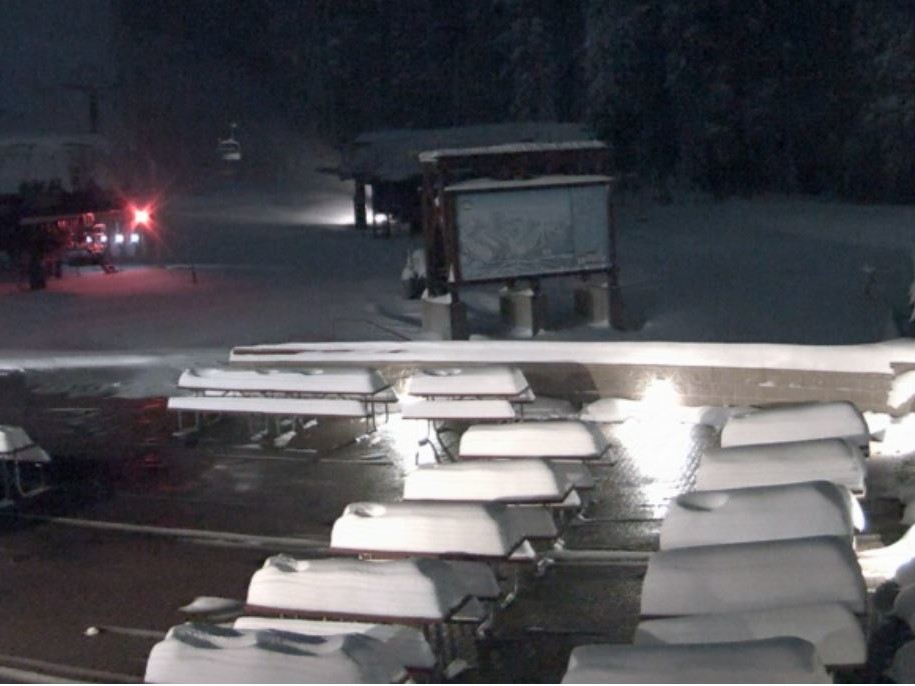 The 3-day storm and 8-day active period is winding down Wednesday with only scattered snow showers. The 3-day and 8-day snowfall totals are impressive for early November!

There have been some complaints that some areas around Tahoe came in on the low end or under the forecast. First off, we don't complain about snow this time of year or any time of year, but the storm performed close to what was expected. Let's look at some of the numbers, which aren't final until Thursday morning as some snow showers are still falling over the mountains.

The heaviest snow did hit south of Tahoe which was expected. A band of heavy snow sat over Homewood on the west shore and just south of the lake over Sierra at Tahoe. They are reporting 36 inches of new snow over the past 24 hours. That's 2 seasons in a row with someone hitting 3 feet in 24 hours early in the season, so the beard gets shaved and doesn't have to grow all season to get to a 3 ft. storm! 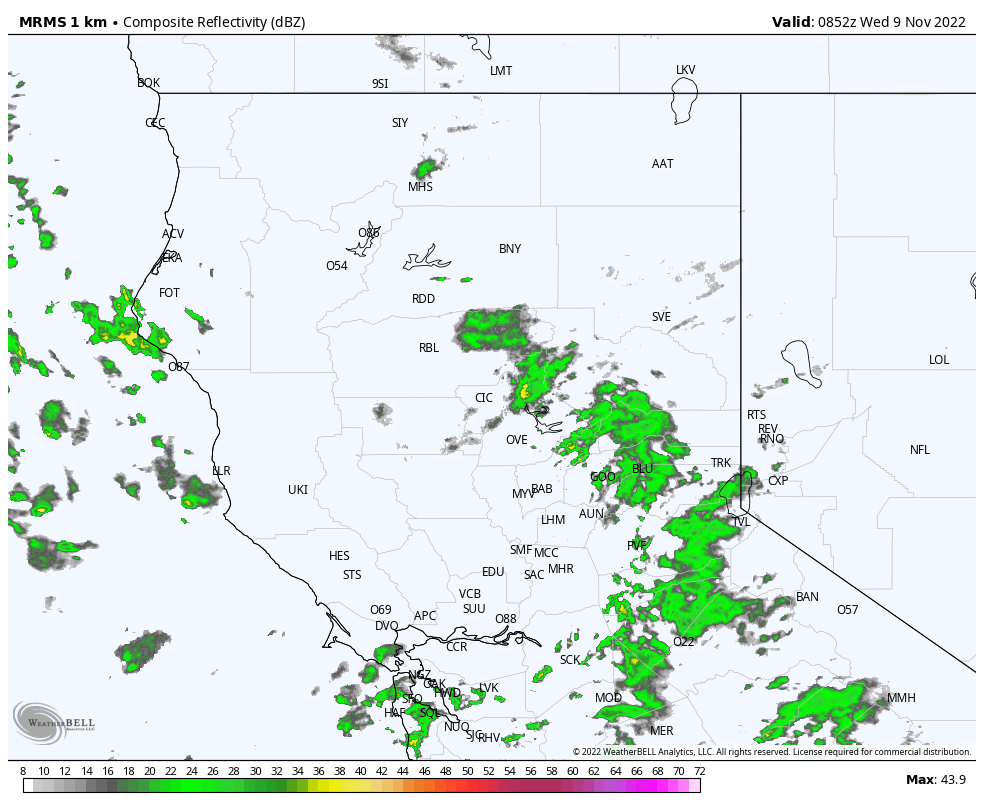 The rest of the ski areas are reporting 9-34 inches with the highest amounts mainly south of Tahoe. Total precipitation amounts over 3 days of up to 3" inches along the crest and you can see the highest amounts to the south. Remember the average used for the forecast Sunday was 3.2", so we came close but a bit less than forecast. 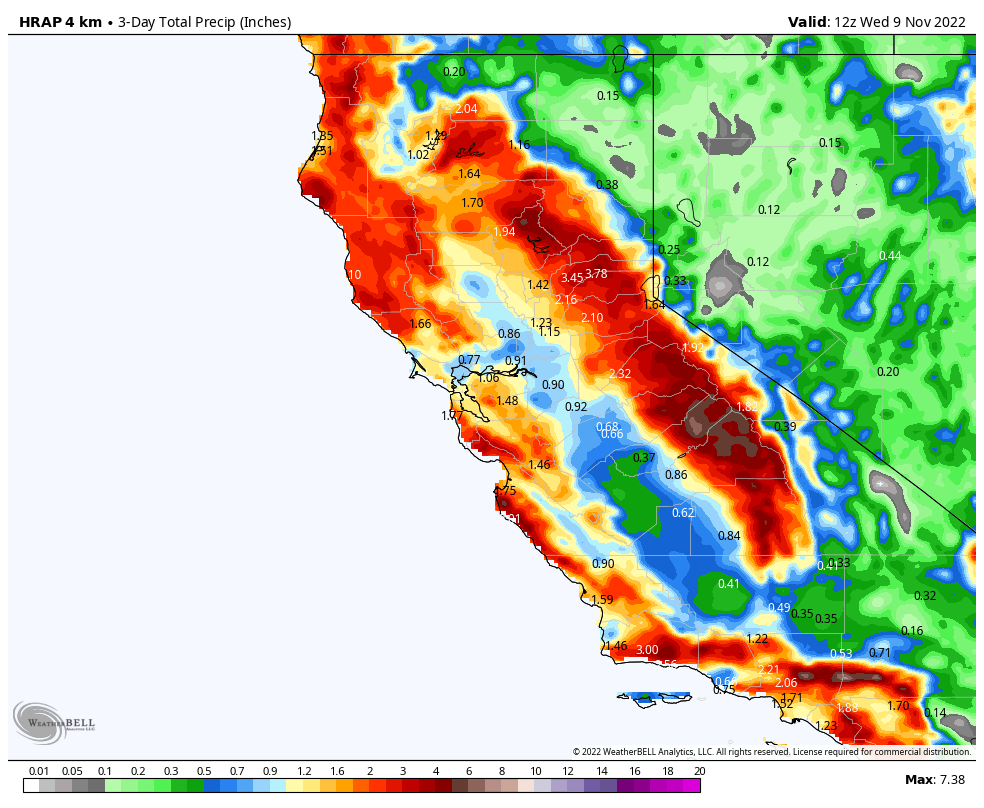 The 3-day storm totals are also highest to the south where 3-4 feet of snow fell from Sierra down to China Peak. Farther north around the Tahoe basin reports of 2-3 feet. (if you see a mtn missing it's because they haven't reported yet) 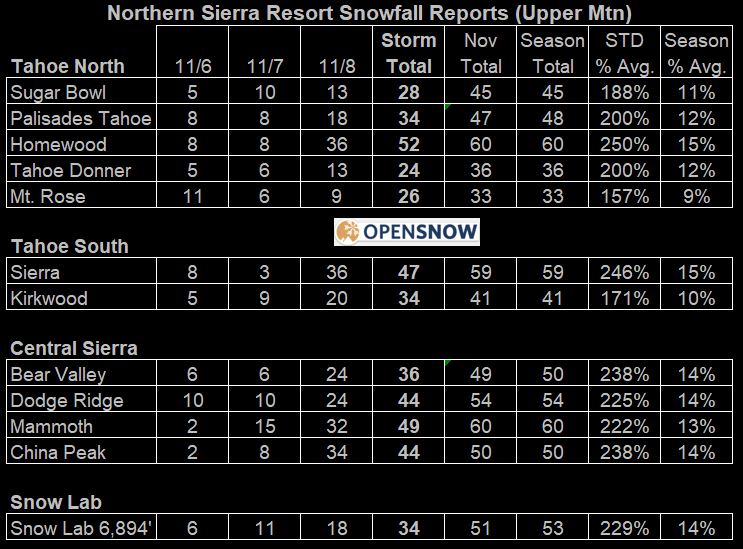 The Central Sierra Snow Lab officially reported 34" of snow. Looking at the lower numbers we did see a southerly flow limit spillover of precip across the Tahoe basin Tuesday, and the snow ratios ended up a bit lower than what I was forecasting. I had 2-4 ft. forecast above 8000 ft. and totals were 2-3 ft. with some mountains coming in close to a foot shy of the forecast.

Some came in right on the forecast and Homewood was over. My final forecast from Sunday vs the reported totals as of Wednesday morning has an average variance of only 4.8 inches, and we could pick up a final inch or two Wednesday from the snow showers for some mountains. 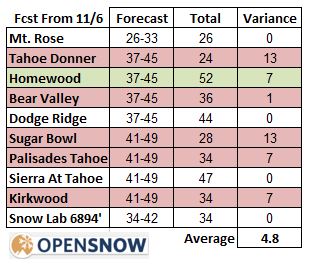 Looking at our forecast for Palisades Tahoe we had a range of 28-48" and an average of 37" from Sunday through Wednesday... 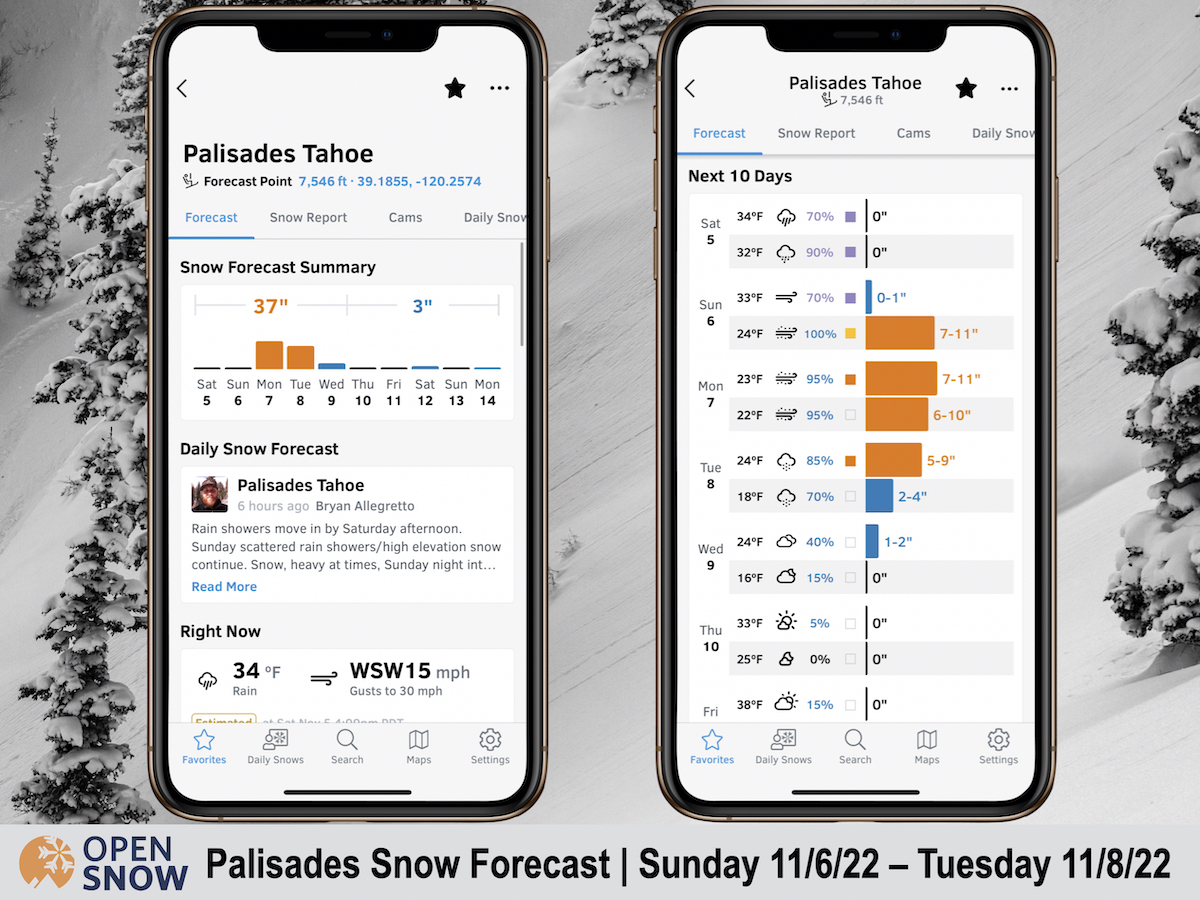 Palisades reported a total of 34" so far which was within the range and 3" shy of the average, but they could pick up 1-2" of additional snowfall from snow showers Wednesday.

For the Snow Lab, we had an average forecast of 36" (27-46") from Sunday through Wednesday and they reported a storm total of 34" so far and could pick up a final 1-2" Wednesday. 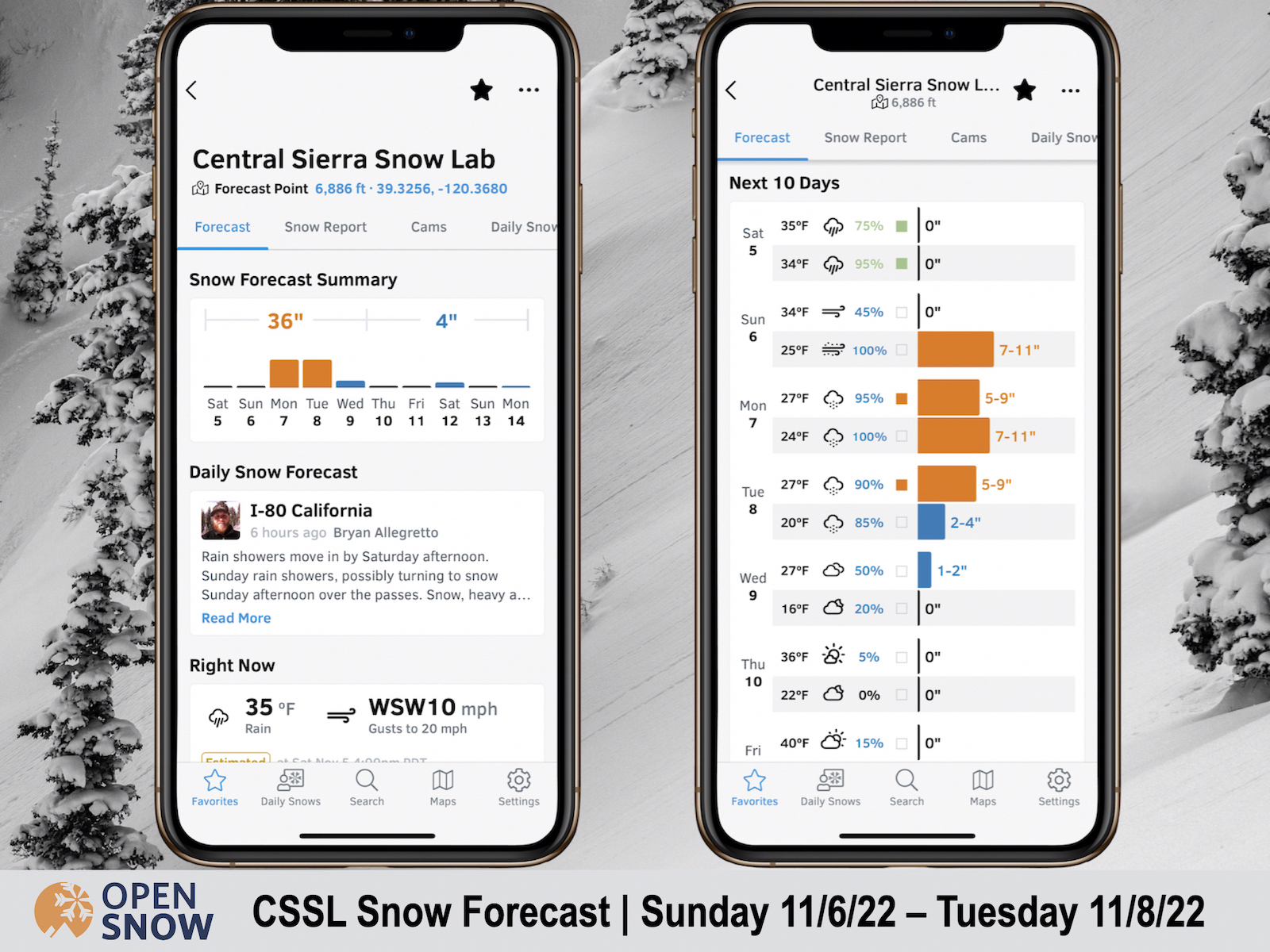 There are the stats for you for transparency and although a few mountains picked up a foot less than my higher-end forecast, are some seriously complaining?! We picked up 2-3 feet in 3 days and up to 4+ feet so far in November! We are over 200% of the average for the date, what a great start!

Partly sunny with scattered snow showers Wednesday. Mostly sunny Thursday and Friday. Highs into the 30s at lake level and 20s for the upper mountains.

A weak system is forecast to move through on Saturday with a few snow showers possible, but currently only expecting a dusting to an inch of snow at best. 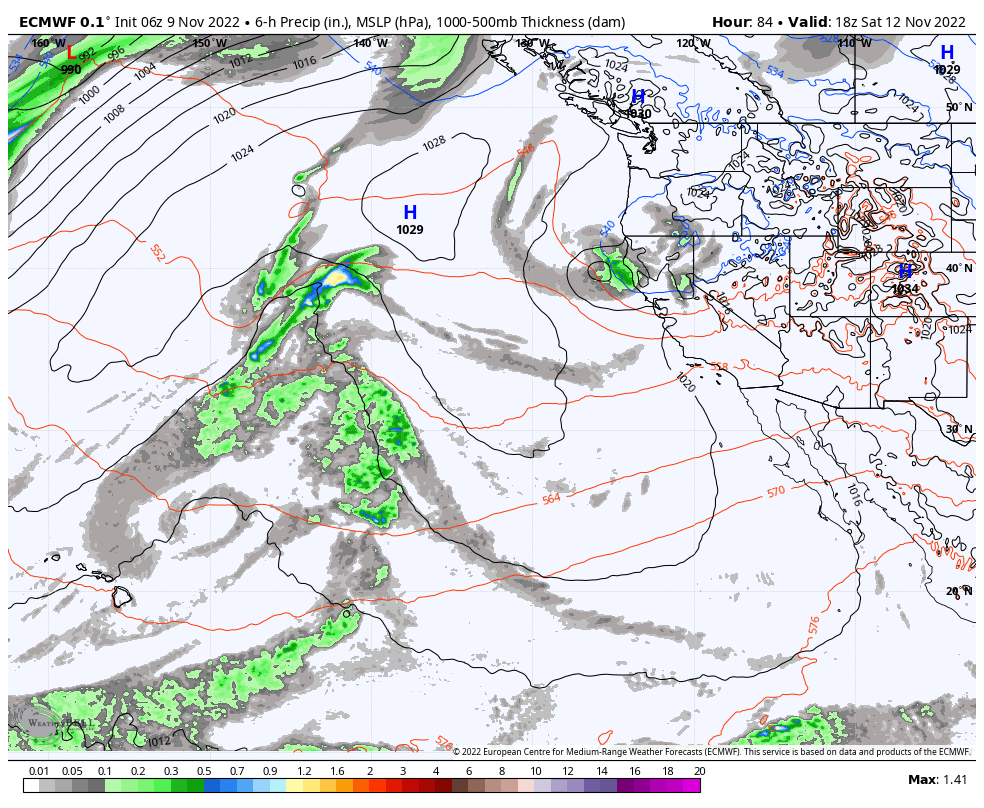 Breezy southwest winds up to 30+ mph over the ridges turning to the northeast on Sunday. Highs in the 30s for lake level and 20s for the upper mountains.

A drier pattern is likely the week of the 14th with a ridge over the West Coast. 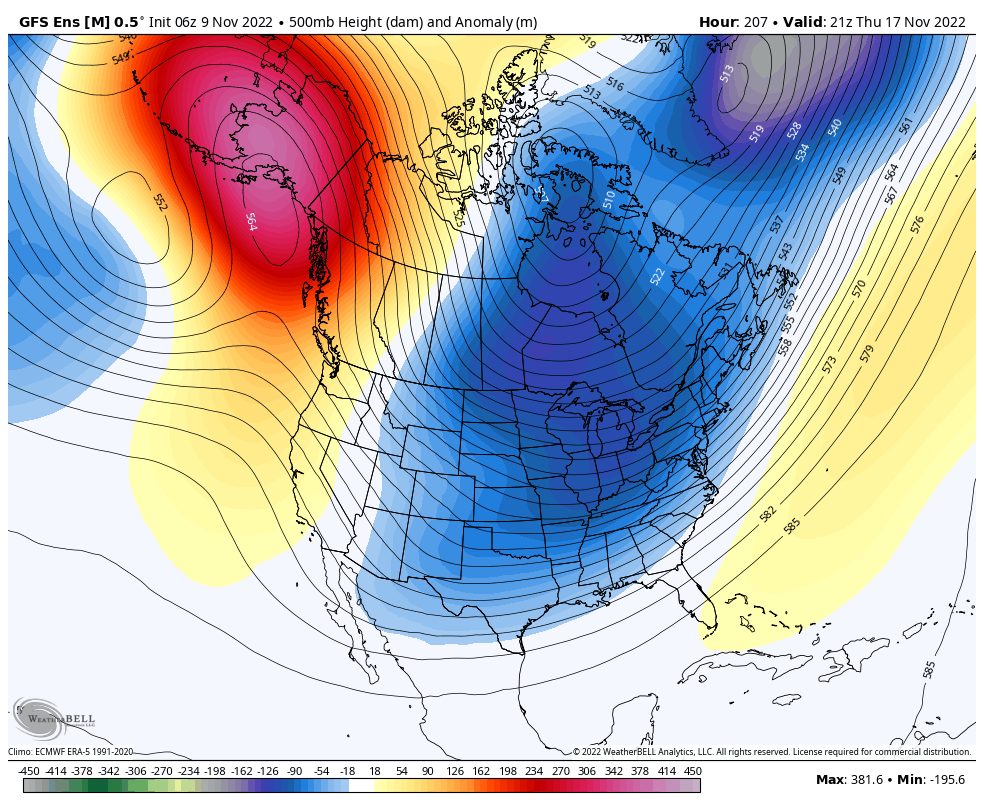 We should start the week cold and could warm up slightly, but look to be on the cooler side of the ridge for most of the week.

As we go into the Thanksgiving week (the week of the 21st) the long-range models suggest that the trough digs back west into the West Coast. 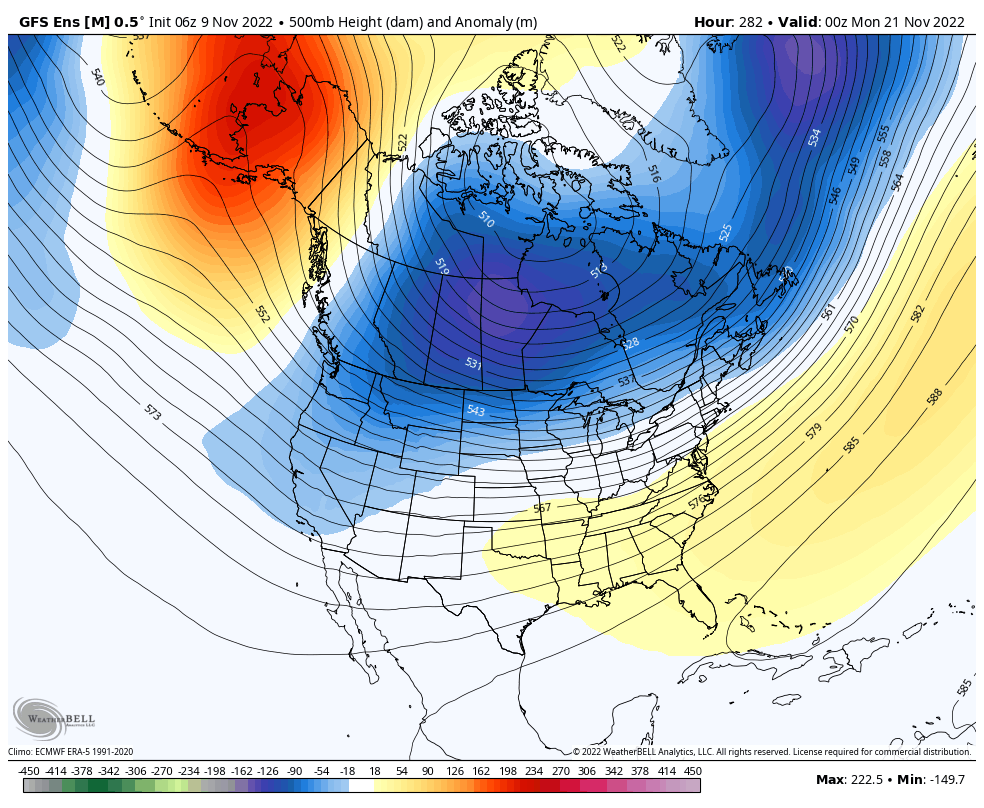 That would possibly open the door to cold systems from the north, but also maybe Pacific moisture coming under the ridge over Alaska. The active phase of the MJO is forecast to be moving through the Pacific, and some of the AR (atmospheric river) models are starting to suggest we could see landfall on the West Coast that week. 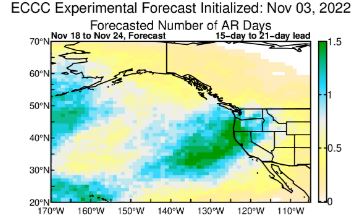 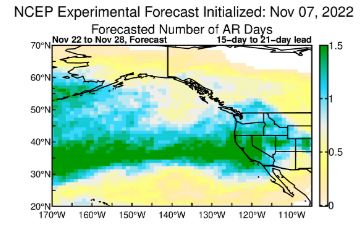 We will definitely be keeping an eye on the trends for Thanksgiving week in case they are onto something.

You can learn more about Forecast Anywhere in this short how-to article:

Getting Started Guide | How to Use OpenSnow