Deep pattern for the West 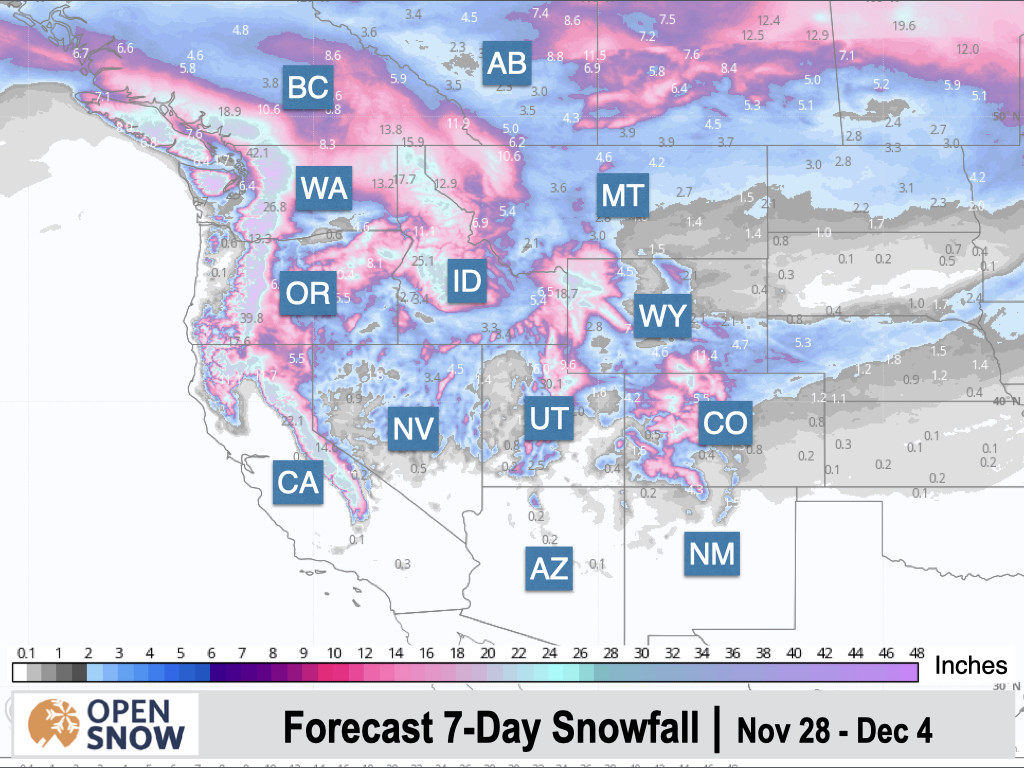 Get ready for a big week across the West as a series of storms will deliver the goods to nearly all major ski regions from the PNW to the Rockies to Tahoe. Colder-than-average temperatures across the West will ensure good snow quality as well. Great start to the season out West! A mild pattern will continue in the East with New England seeing storms that start as rain & end as light snow.

Three storms in the next seven days for the West

Back-to-back-to-back storms will impact the West over the next week with most major ski regions picking up significant snow totals. There are still some question marks on the individual storm tracks as we head later into the week, but the overall pattern looks good. For a general idea, check out the 7-day snowfall outlook from a blend of weather models from Monday (11/28) through Sunday (12/4).

A storm will continue to produce heavy snow from Oregon to Wyoming on Monday with lingering snow on the backside of the storm further north in Washington. On Monday night and Tuesday, the focus of the storm will shift southward into Utah and Colorado where moderate to heavy totals are expected.

Out East, the back edge of a storm will produce some light snow showers across Northern New England with somewhat heavier snow along and north of the St. Lawrence River in Quebec. A storm will also reach the Upper Midwest on Tuesday with snow developing across portions of Minnesota, Wisconsin, and the Western UP of Michigan, while areas further east in Michigan will see rain. 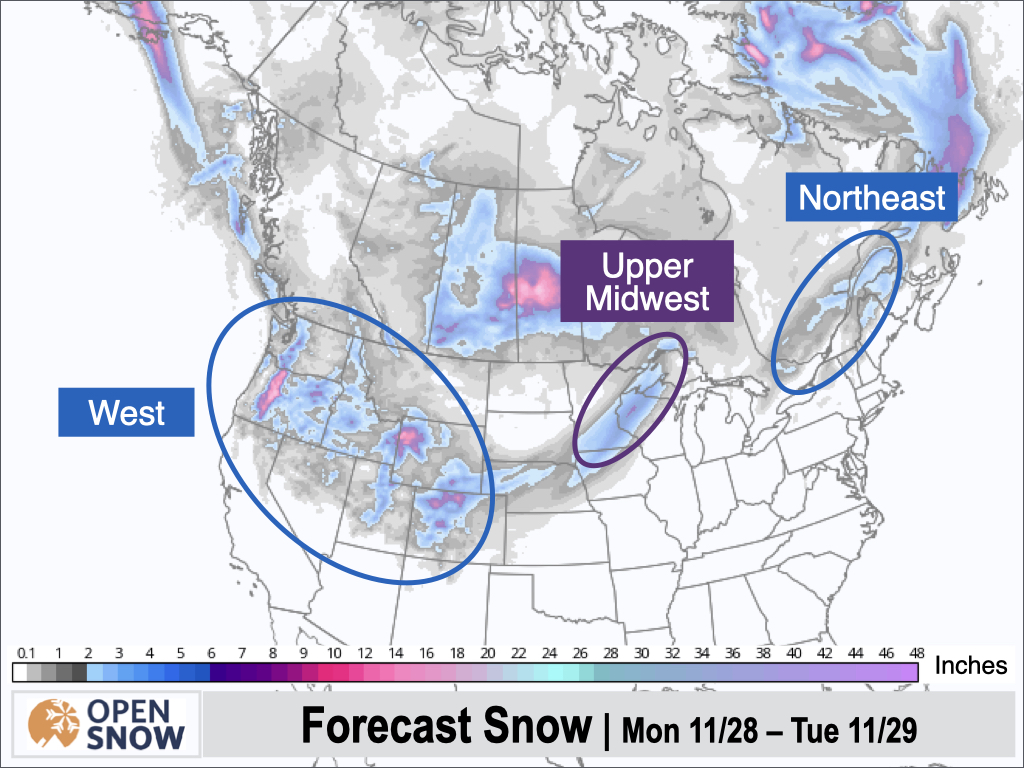 The next storm will impact the Pacific Northwest on Wednesday and Thursday with heavy snow and very low snow levels (close to sea level), resulting in great-quality powder snow. By later on Thursday, snow chances will also increase across Tahoe, Southern Idaho, and Western Wyoming as the storm deepens across the West.

A storm will bring rain to the entire Eastern U.S. (and areas south of the St. Lawrence River in SE Canada), before changing over to light to moderate snow showers across New England and the Great Lakes on Thursday as colder air arrives on the backside. Heavier snow will be confined to areas further north in Quebec. 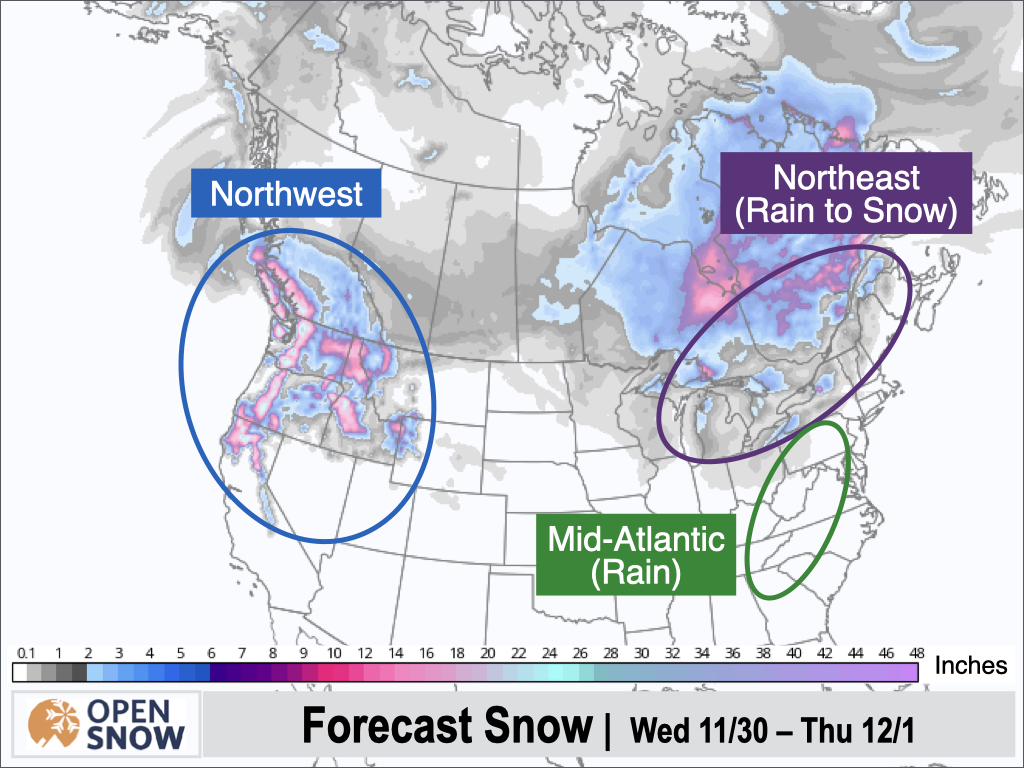 Tahoe will become the main focus for heavy snow on Friday as a storm deepens to the south across the West. Confidence is relatively low regarding the storm track as it moves inland, but the Central and Northern Rockies will both be in play for more snow on Friday and Saturday. Another storm will then reach the West Coast on Saturday with more snow expected for Tahoe and the Pacific Northwest.

A storm will also move into the Northern Great Lakes region on Saturday, with Northern Minnesota, the UP of Michigan, and Ontario looking like the most favored areas. 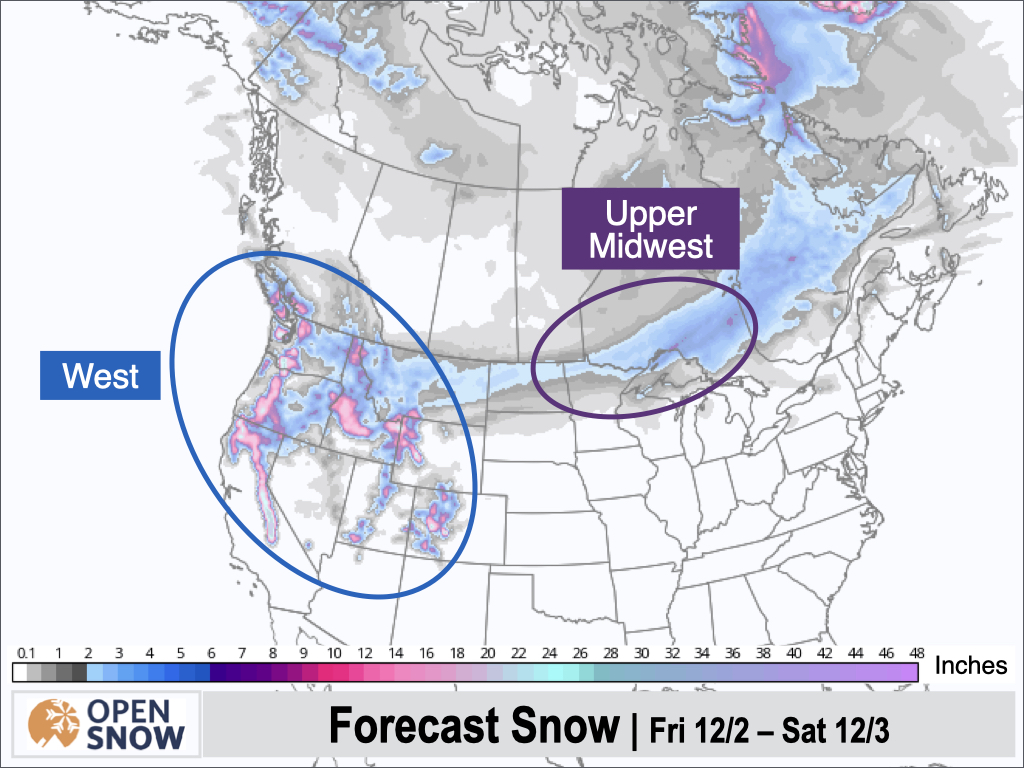 A storm across the West is expected to linger into Sunday with the Central Rockies (UT, CO, WY) expected to be favored. During the middle to latter portion of this period, the storm track looks to be most favorable across the Northwest. Temperatures are expected to remain colder than average throughout the West.

Across the East, a relatively active pattern will continue, but storms will produce rain for the Mid-Atlantic with warm air in place. Further north, the trend of rain changing to light snow on the back edge of storms is likely to persist across New England. 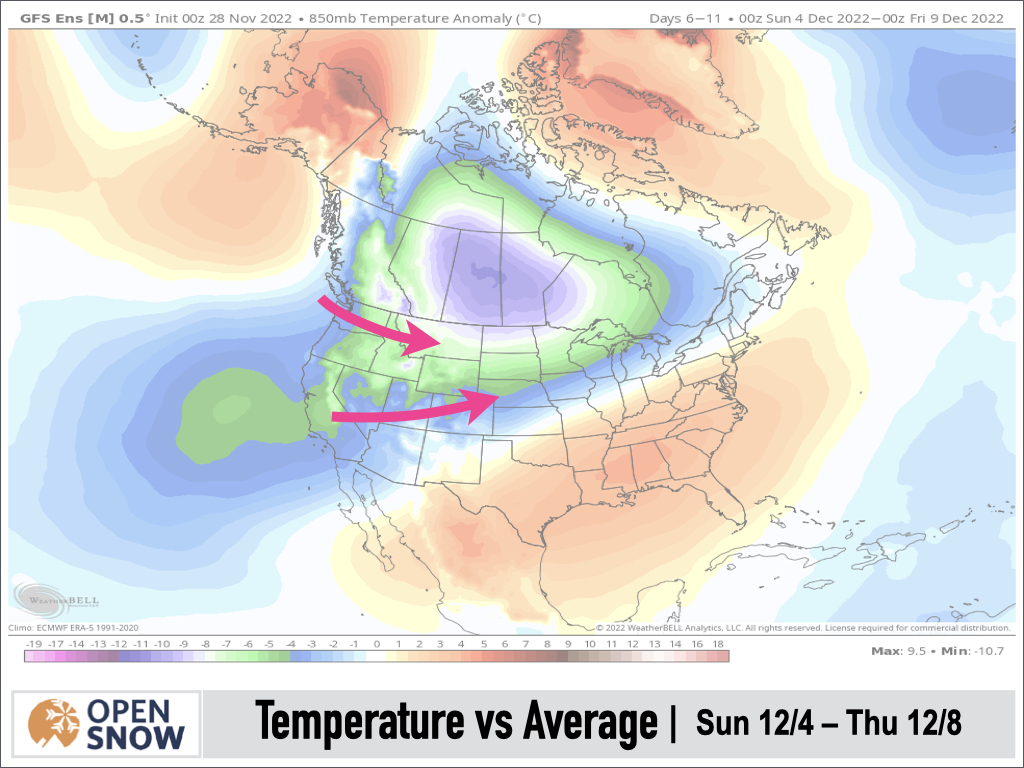