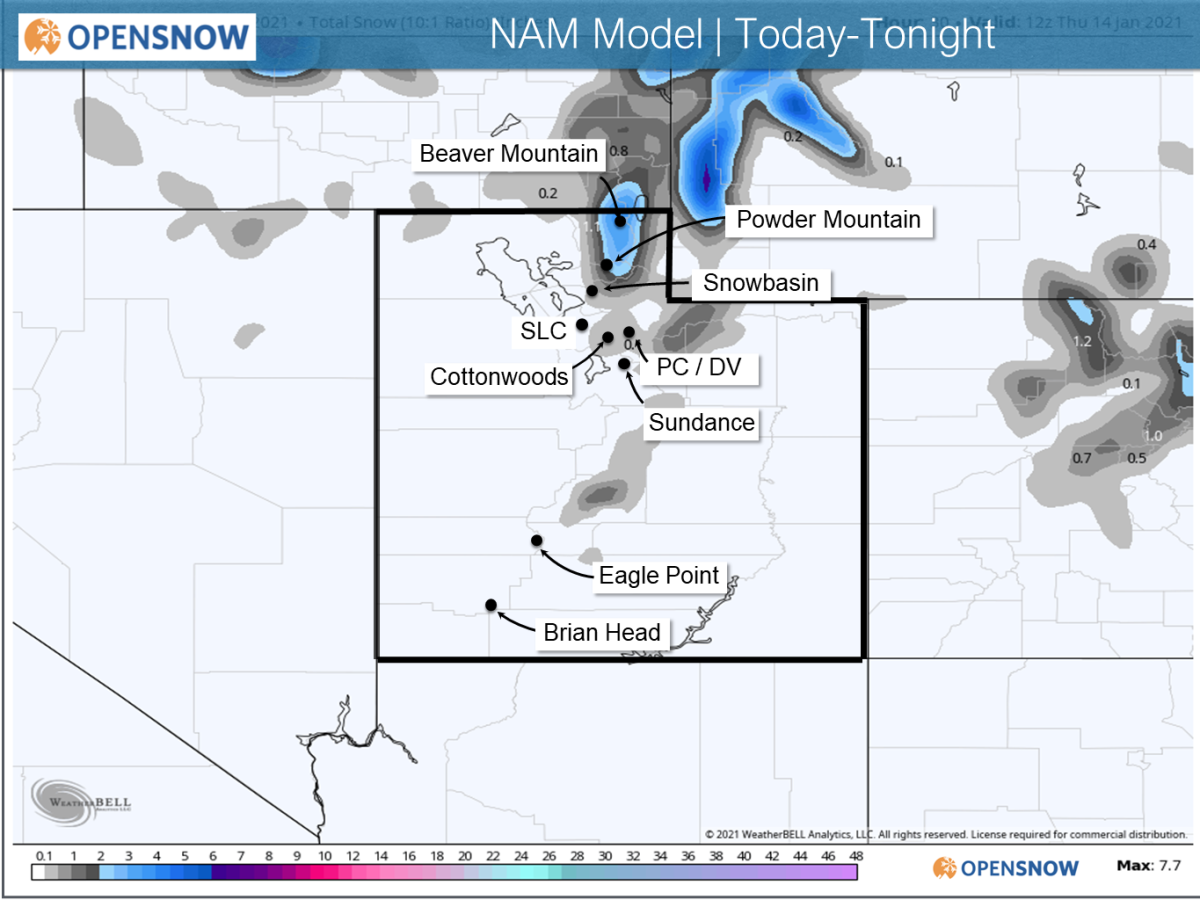 A weak system will enter Northern Utah today and bring the threat for light snow showers today and tonight. Accumulations should be very light. We will have a couple additional weak storms on Saturday and again Monday. Pattern change looking likely later next week.

Everyone has their favorite Utah resort. But did you know that no two storms fall the same? That’s why it’s worth checking the forecast and report to see where the deepest turns are going to be. Explore all of Utah’s resorts at VisitUtah.com

We have another "strength-challenged" system that will brush far northern Utah today. I've already seen some snowflakes on various webcams. I expect those to increase as we head into this afternoon. Accumulation today will be very light as evidenced by the NAM output below: 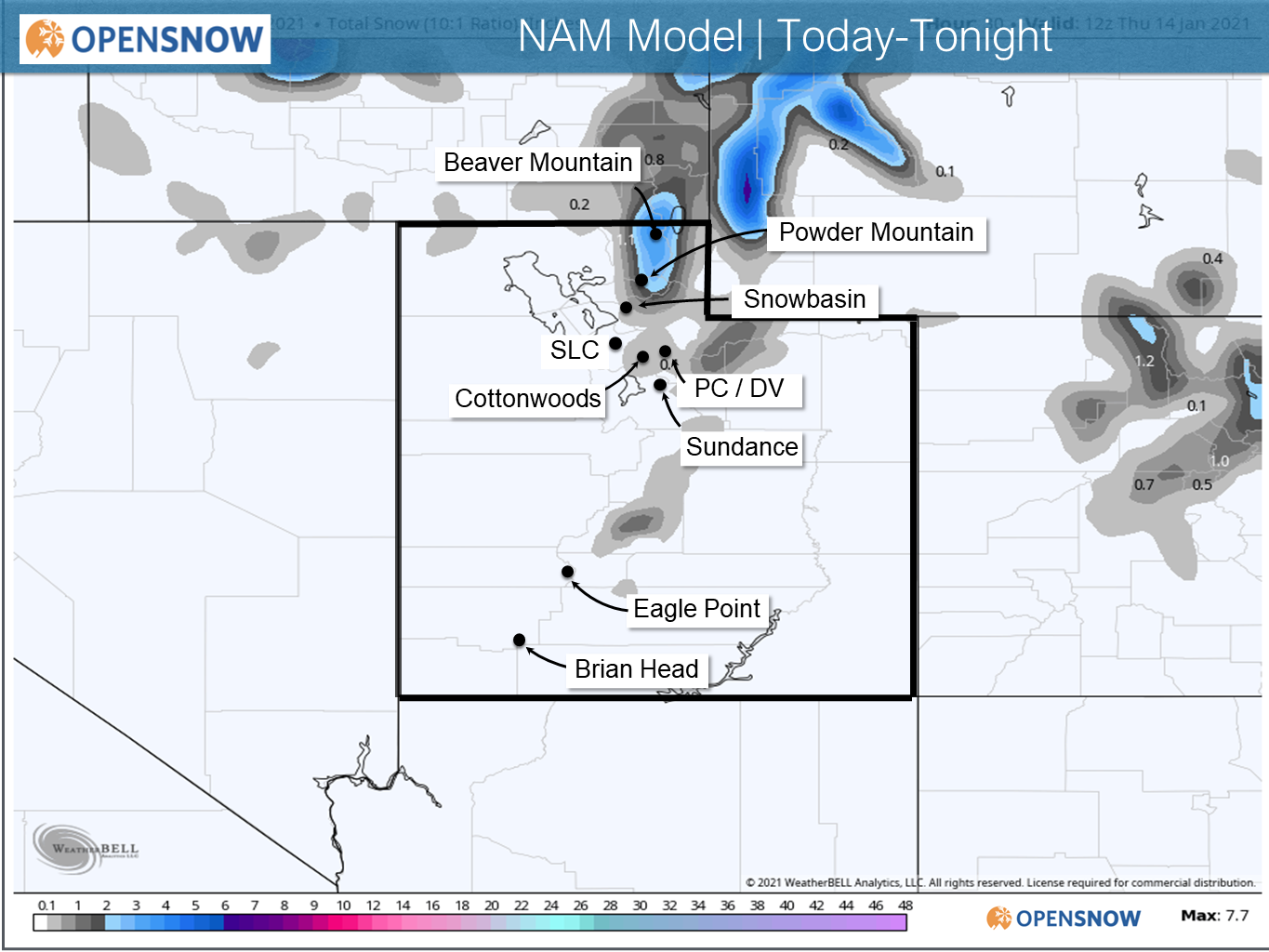 The Bear River Range in the north could see 1-3" today. Otherwise, the rest of use farther south are looking at zilch to maybe an inch.

We will have a break Thursday and Friday. A weak system for Saturday could bring the threat for light showers again to northern Utah. Accumulations unlikely to be more than an inch. Then, a break Sunday with another system timing for around Monday. This system is slightly stronger in the GFS, but weaker in all other models.

These systems are so weak that it hurts my soul to even mention them. They are unlikely to do anything for us besides bring clouds and maybe tease us with a few flakes. The next week in general is pretty dang dry. Here is the next 7 days from each major model. 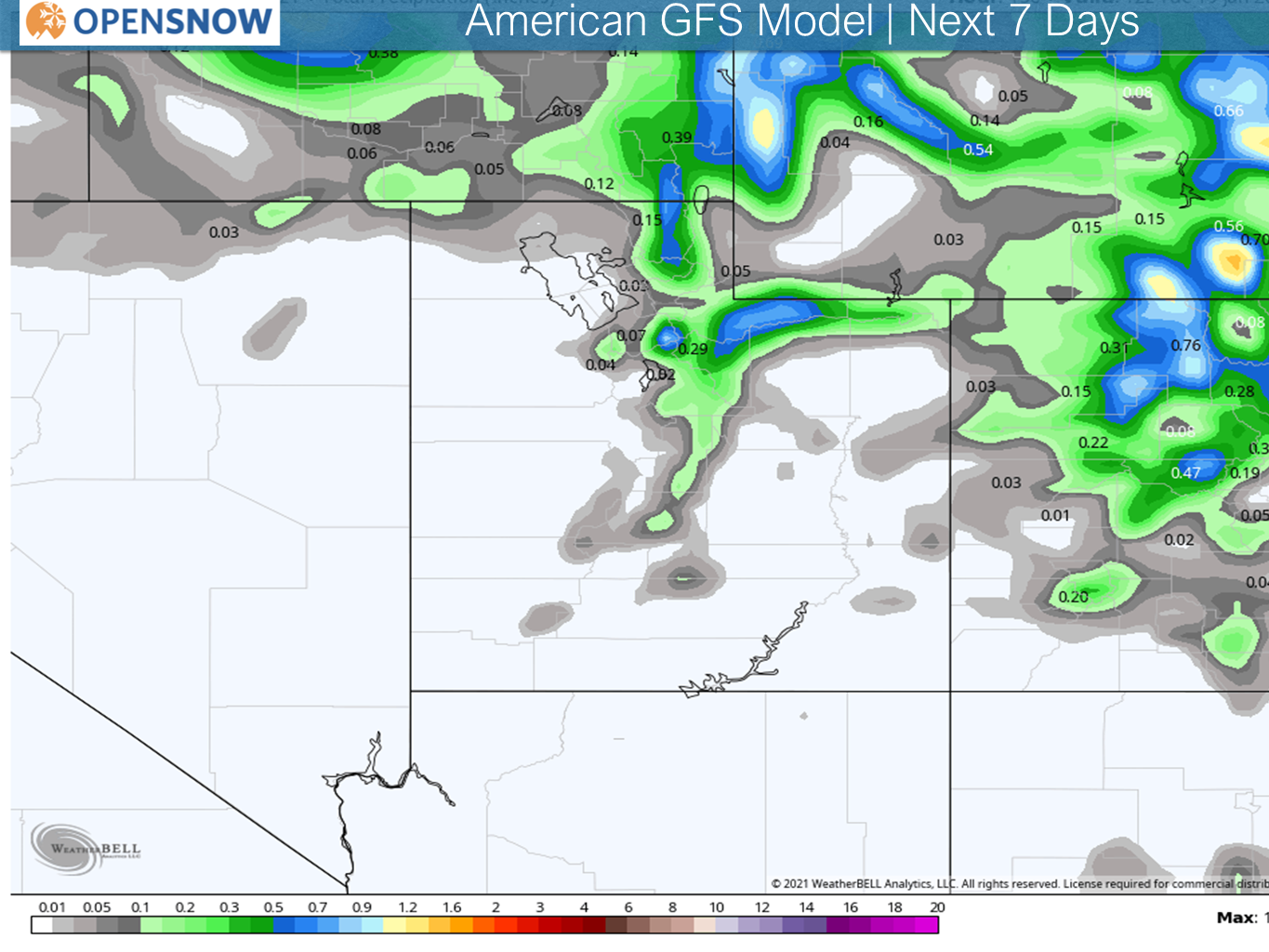 This is the best model because it's a bit stronger with the Monday storm. Unfortunately, it's an outlier right now and I have very little confidence in it. 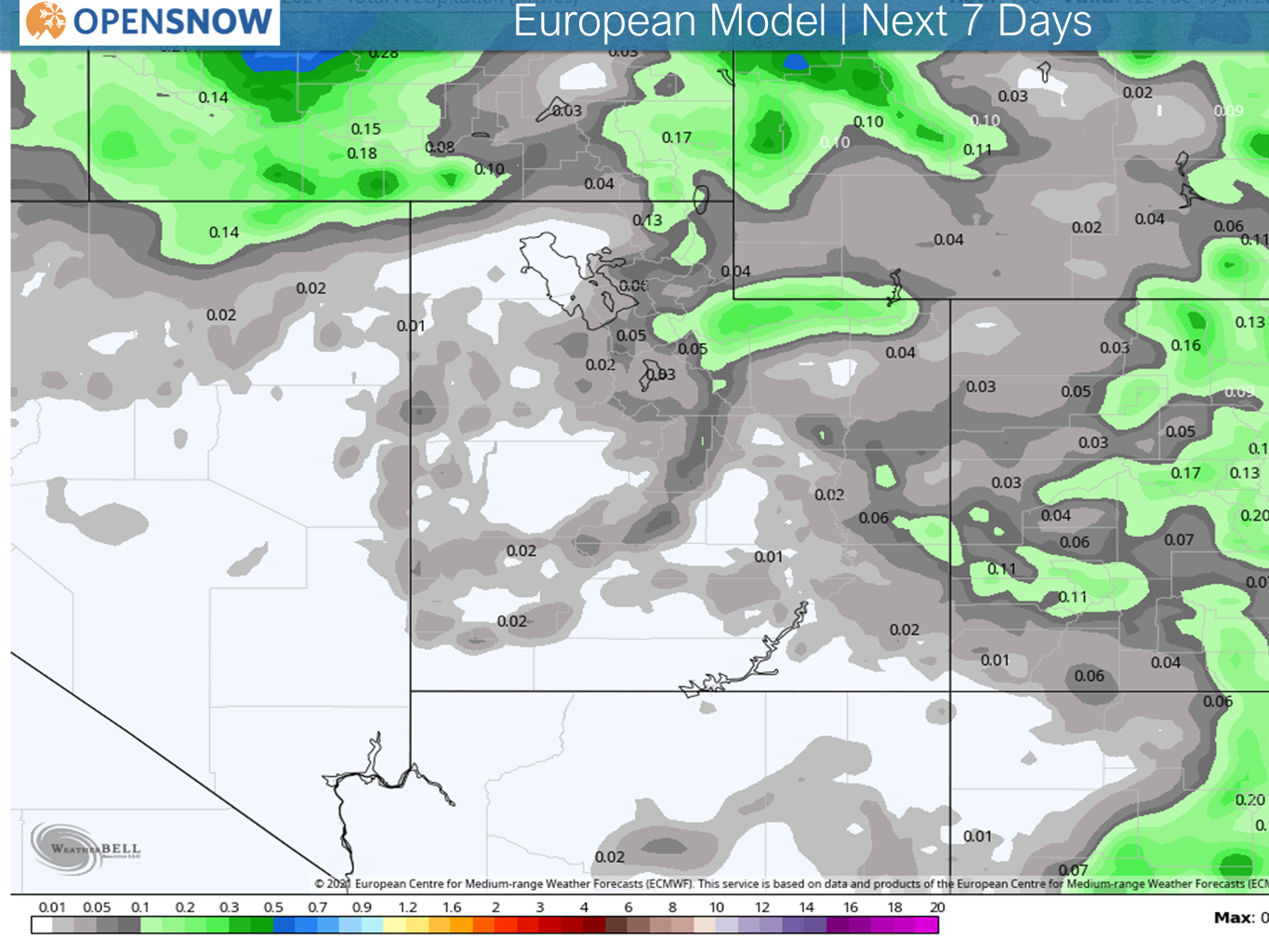 Euro is the weakest model and has only traces of snow with each system. 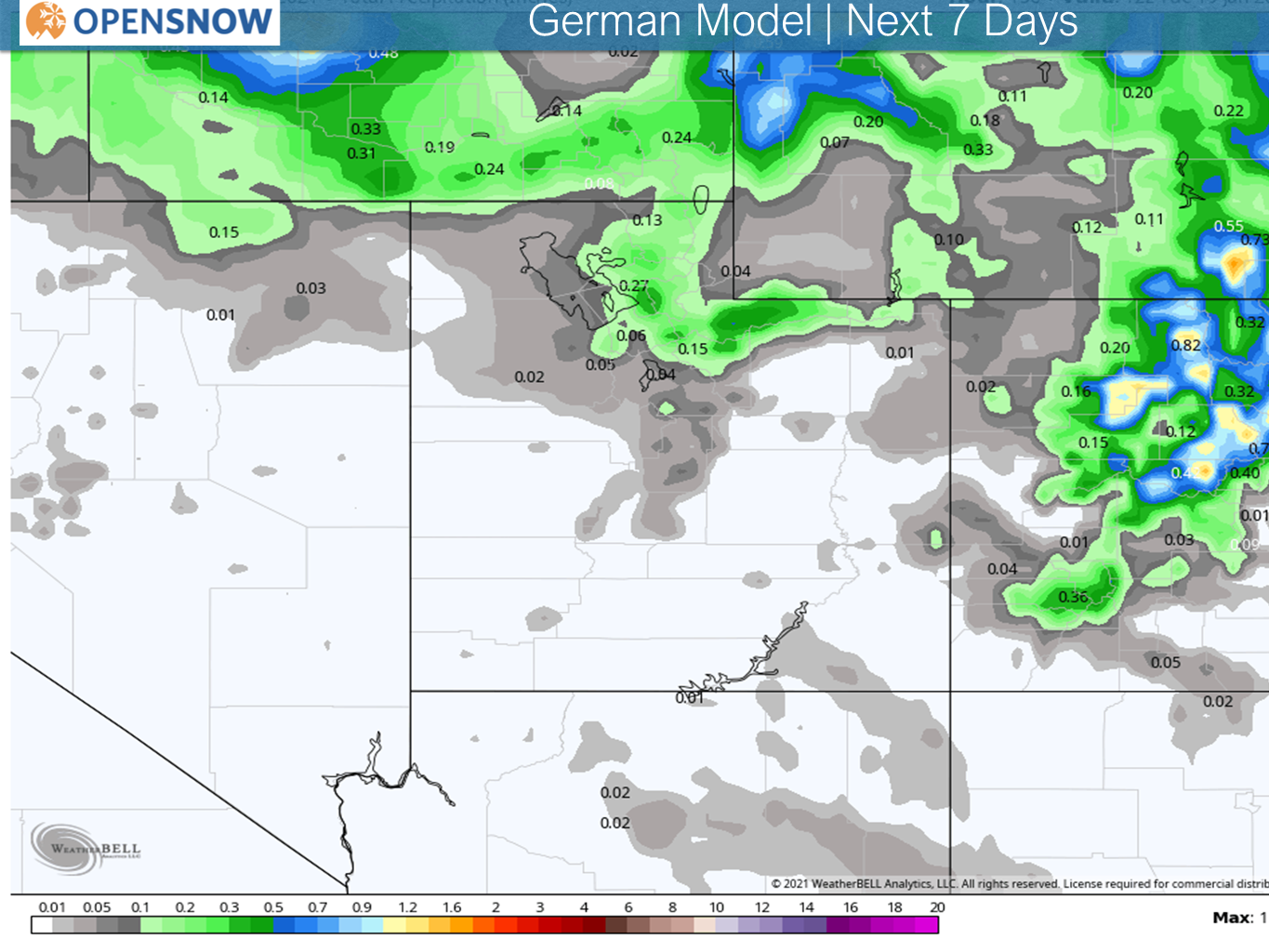 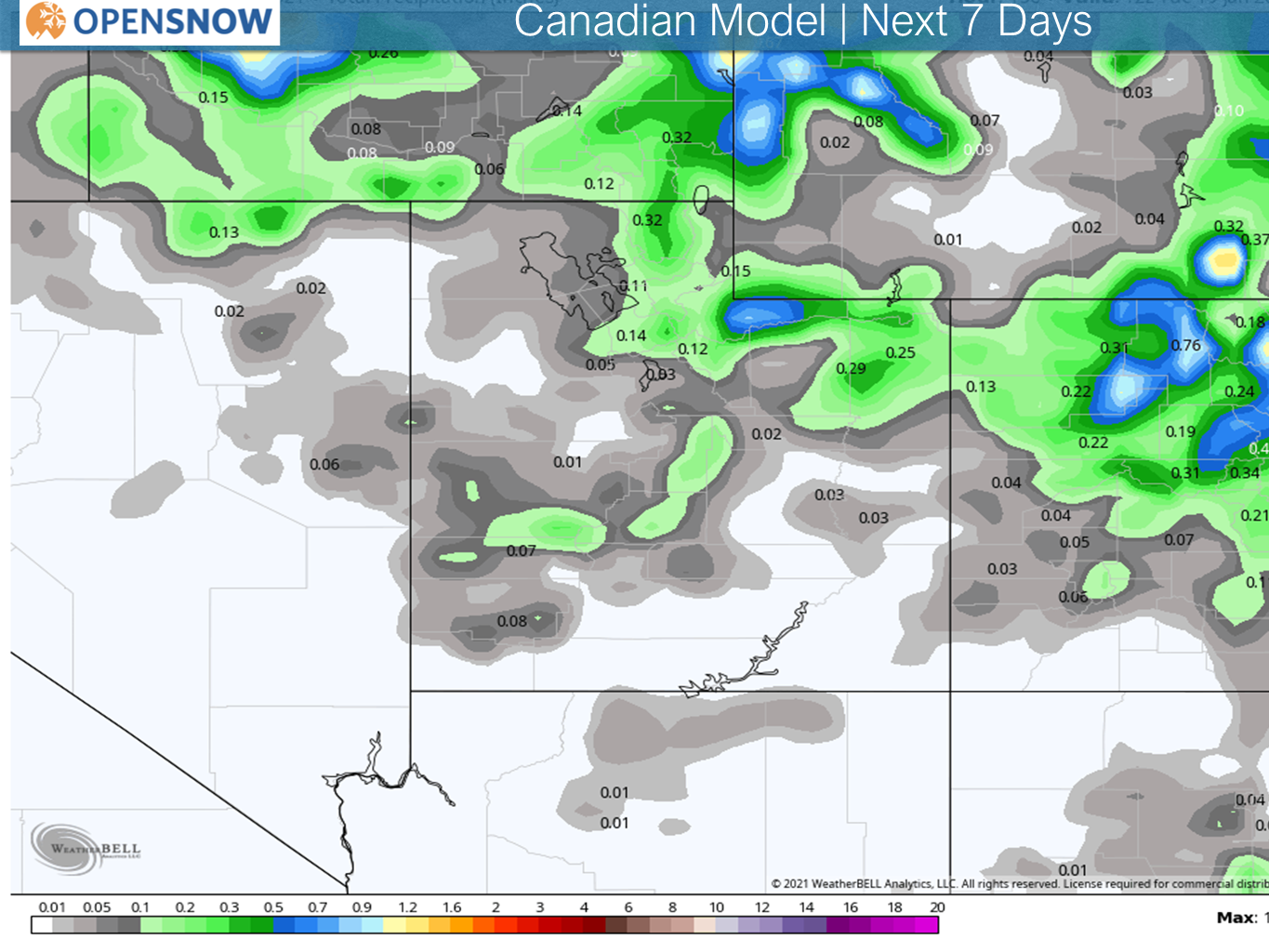 Both the above models are somewhere in between the GFS and Euro. Really, this is just a lot of information to tell you one thing. We might have a few "storms" in the next 7 days, but that doesn't mean we will get any meaningful snow.

We are still tracking a pattern change that should take place later next week. A trough is going to dig into the central US. The ridge over the west will subsequently move west over the pacific and allow the trough and storms systems to gradually dig farther west. So far, we are still waiting on 10-day operational runs to pick up on individual storms, but the ensembles remain in remarkably good agreement. Here is the GEFS mean height anomalies: 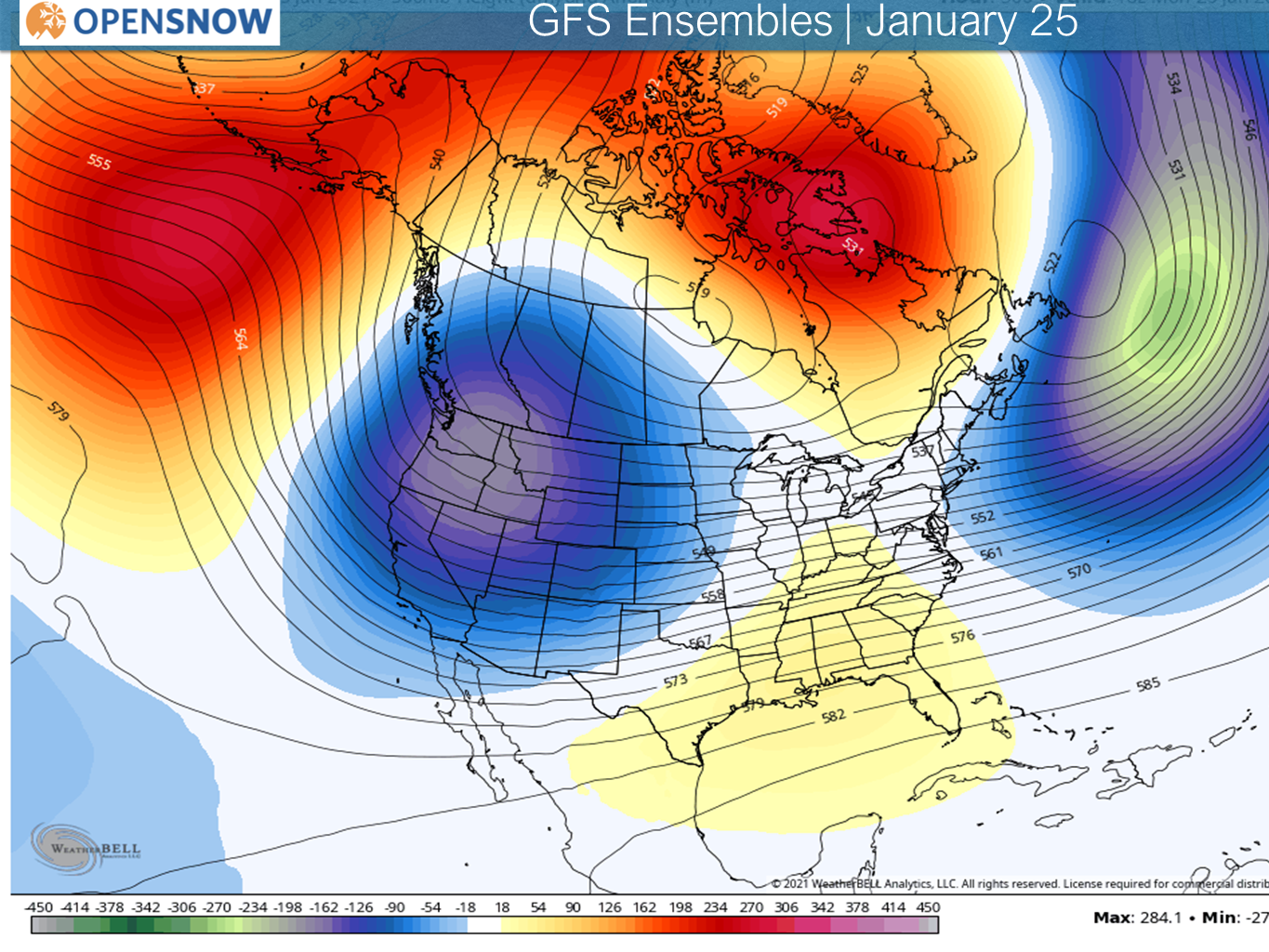 And the Euro ensembles for the same date: 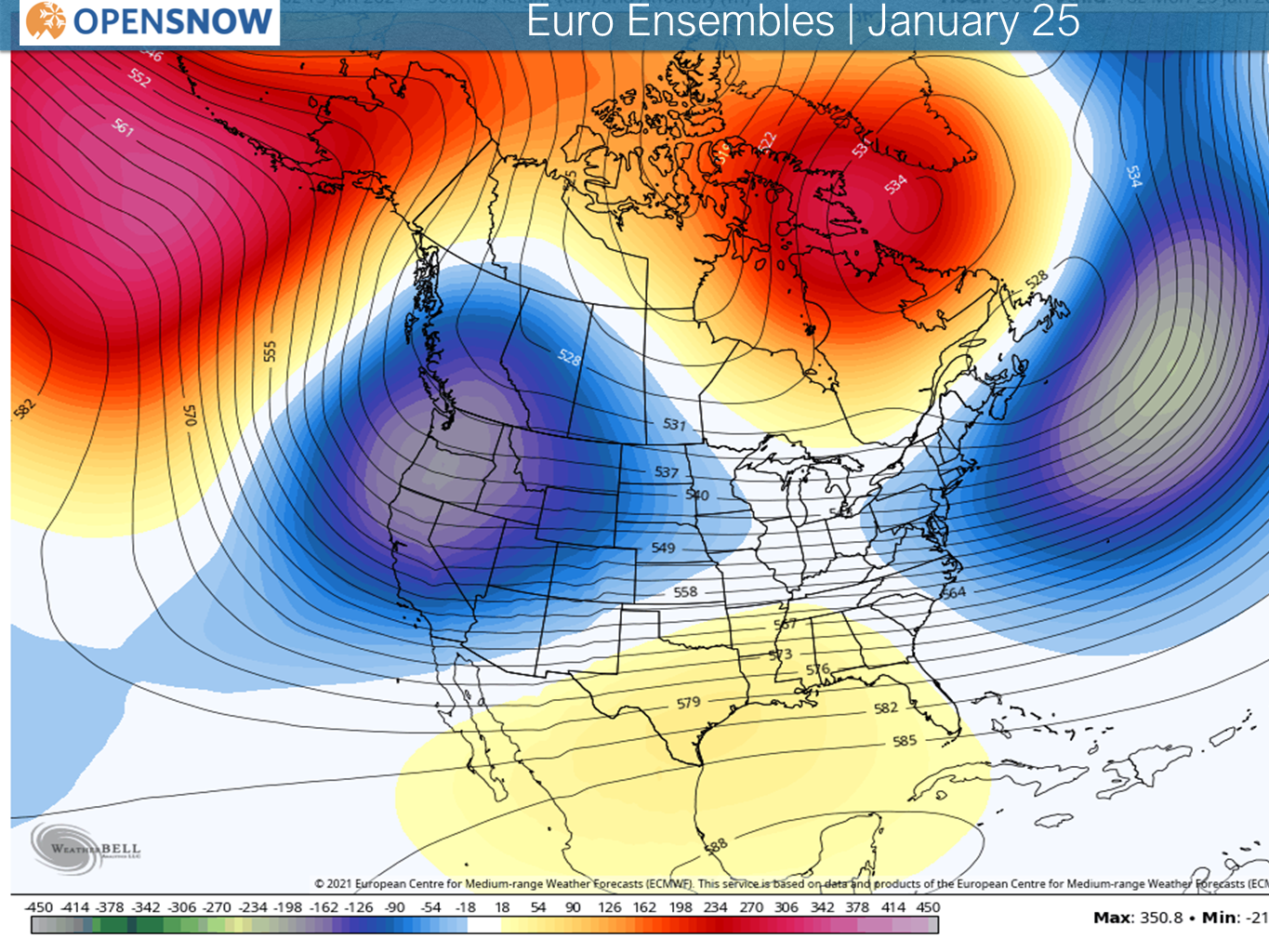 Like I said, very good agreement considering we are still 12 days out. The questions we have now are 1) will this pattern hold as we get closer? We've seen models back off of major pattern shifts already this season, and 2) will this pattern have good storms? In theory, the door is open for storms, we just need them to actually show up.

We will continue to watch and hope!