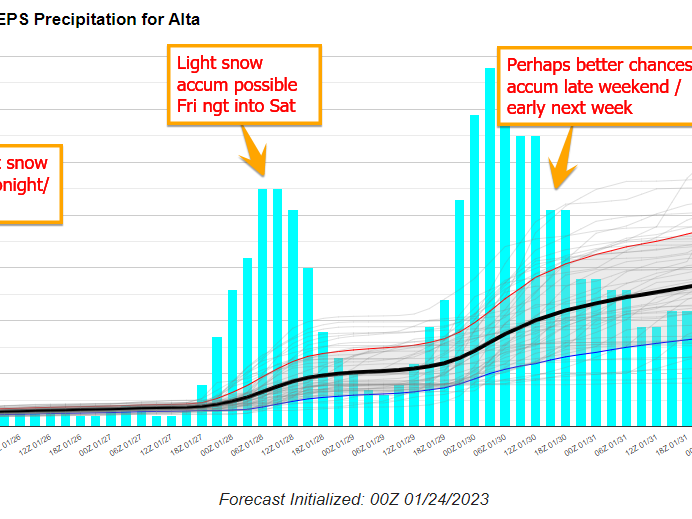 Cold this week with intermittent chances for light snow. Chances for accumulation should increase later this week into early next weekend, although significant snow looks unlikely anytime soon.

We remain chilly. A very weak system will clip us tonight into early Wednesday. Northern Utah mountains, particularly the north slope of the Uintas, should see some light snow showers. Accumulations look to be quite low with just a dusting to maybe an inch or two at best. It will reinforce our cold air for midweek.

A better chance for bluebird on Thursday before another weak system approaches for late Friday into early Saturday. This system again is quite weak, but may have a bit more moisture to produce light accumulation.

Finally, we may see another follow-up wave for late weekend into early next week. This storm may track a bit farther west and pick-up a bit of help from the Pacific which could increase totals a bit. Overall, you can see these three "storms" in the EPS ensemble plume for the next 10 days:

Not impressive, but we do see total QPF over 1" with up to 1.5" for Upper Cottonwood over this time period. That's not a lot, but it's not nothing either. While big accumulations are not likely, we could easily see some modest powder days this weekend or early next week.

Models are having a really tough time with any of the details of the pattern after Feb 1. However, the general idea is that we will have a couple chances for storms, though they may not be significant still. Some model runs have been more favorable than others. I will say that in general, a cool pattern should continue and I don't see any signs of dominant ridging.

"Fresh Tracks!
This week The Flakes talk about the Snow Returning to the Northeast, chat with Julien Ross about the Great Snow in New Mexico, report Snowfall Around the rest of The U.S., look at the Snowfall Forecast for The Upcoming Week, and discuss the Long-Range Snowfall Patterns."