Wildfires are a common occurrence across the mountainous regions of the United States. While fires are most common during the summer months across the Western U.S., they can occur at other times of the year and can also occur in the Appalachians and Upper Midwest when conditions are favorable.

For fire weather concerns to exist, vegetation fuels need to be dry and "primed" to burn in the first place. Extended periods of warm/hot and dry weather can lead to vegetation drying out over time, and eventually becoming susceptible to fire.

Areas that are experiencing a drought are often more susceptible to fires as well, as this is a key indicator of the relative "dryness" of an area compared to average. 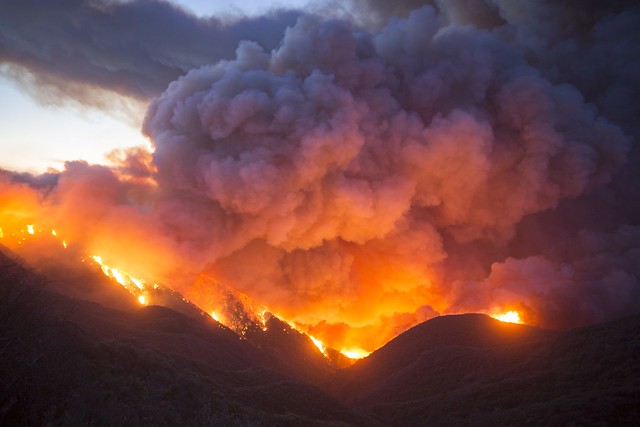 Relative humidity as a percentage is a function of both temperature and moisture, and is a key indicator of whether or not the atmosphere is dry enough to influence fire danger. Low relative humidity levels lead to further drying of vegetation fuels on a short-term basis and can lead to short-term spikes in fire danger on a day-to-day basis.

Relative humidity is usually highest during the afternoon hours when temperatures are highest. As a result, fire danger is often highest between about midday and sunset, all other factors equal.

When fuels are dry and relative humidity is low, wind is one of the most important factors that can influence fire danger and spread potential. Sustained periods of strong and/or gusty winds can lead to rapidly spreading wildfires, and can exacerbate fire behavior from ongoing fires.

Downslope winds (ex. Chinook winds and Santa Ana winds) can be particularly dangerous, because these type of winds lead to further drying of the atmosphere and can also be very strong and lead to extreme fire behavior.

Sustained wind speeds or frequent gusts of 25 mph or higher are considered to be the minimum threshold for significant fire weather concerns when dry conditions (or ongoing fires) are already present. As wind speeds increase above the 25 mph, fire danger becomes even more of a concern.

Wind-driven extreme fire events are the scariest in terms of rapidly spreading fires that catch people off guard. These often occur during the fall (or even winter and spring) when winds tend to be stronger compared to the summer.

Hot temperatures are conducive to fire danger and fire activity, because excessive heat affects both ignition and combustion processes. As a result, heatwaves (stretches of well above average temperatures in the summer months) often correlate to spikes in fire danger in areas where conditions are already dry.

Instability tends to be highest during the afternoon hours when surface temperatures are at their warmest levels. When the atmosphere is hot and unstable, a pyrocumulus cloud (similar to a thunderstorm cumulonimbus cloud, but resulting from a wildfire) will likely develop during the afternoon above a large and active fire.

Thunderstorms produce lightning, which can ignite fires. In fact, lightning-triggered fires are the primary natural cause of wildfires. The amount of moisture associated with a pattern conducive for thunderstorms will largely influence fire potential.

Modest amounts of atmospheric moisture with drier air holding in place in the lower levels of the atmosphere will often result in "dry" thunderstorms, which are defined as storms that produce less than a tenth of an inch of rain under the core of the storm.

Dry thunderstorms are common along the periphery of monsoon moisture circulations in the Western U.S. in the summer, and these storms which produce little rainfall can often ignite new wildfires. They can occur in other parts of the country as well at various times of the year when instability is high but moisture levels are marginal.

Another fire weather hazard that occurs with dry thunderstorms is gusty/erratic outflow winds. When the lower levels of the atmosphere are dry, much of the falling rain underneath a thunderstorm will evaporate, which causes the downdraft of a thunderstorm to further accelerate toward the surface, leading to strong winds gusts that can significantly affect fire behavior of ongoing fires or quickly spread newly triggered fires.

Gusty outflow winds can also lead to an abrupt change in wind direction, which in turn can shift the direction in which a wildfire is burning. This happened in the Waldo Canyon Fire near Colorado Springs in 2012, when strong outflow winds from a thunderstorm suddenly pushed the fire into the outskirts of the city.

The National Weather Service will issue a Fire Weather Watch 24 to 72 hours in advance of a day in which fire weather conditions are expected due to some combination of dry fuels, low relative humidity, strong winds, or dry thunderstorms.

The National Weather Service will issue a Red Flag Warning when critical fire weather conditions are expected within the next 12-24 hours.

Red Flag Warnings should always be taken seriously, but when high wind events (gusts of 40-50 mph or higher forecasts) are also forecast to coincide with high fire danger, you should really be prepared to act quickly should a wildfire break out in your region.