Go With the Flow / Radical Change for Friday 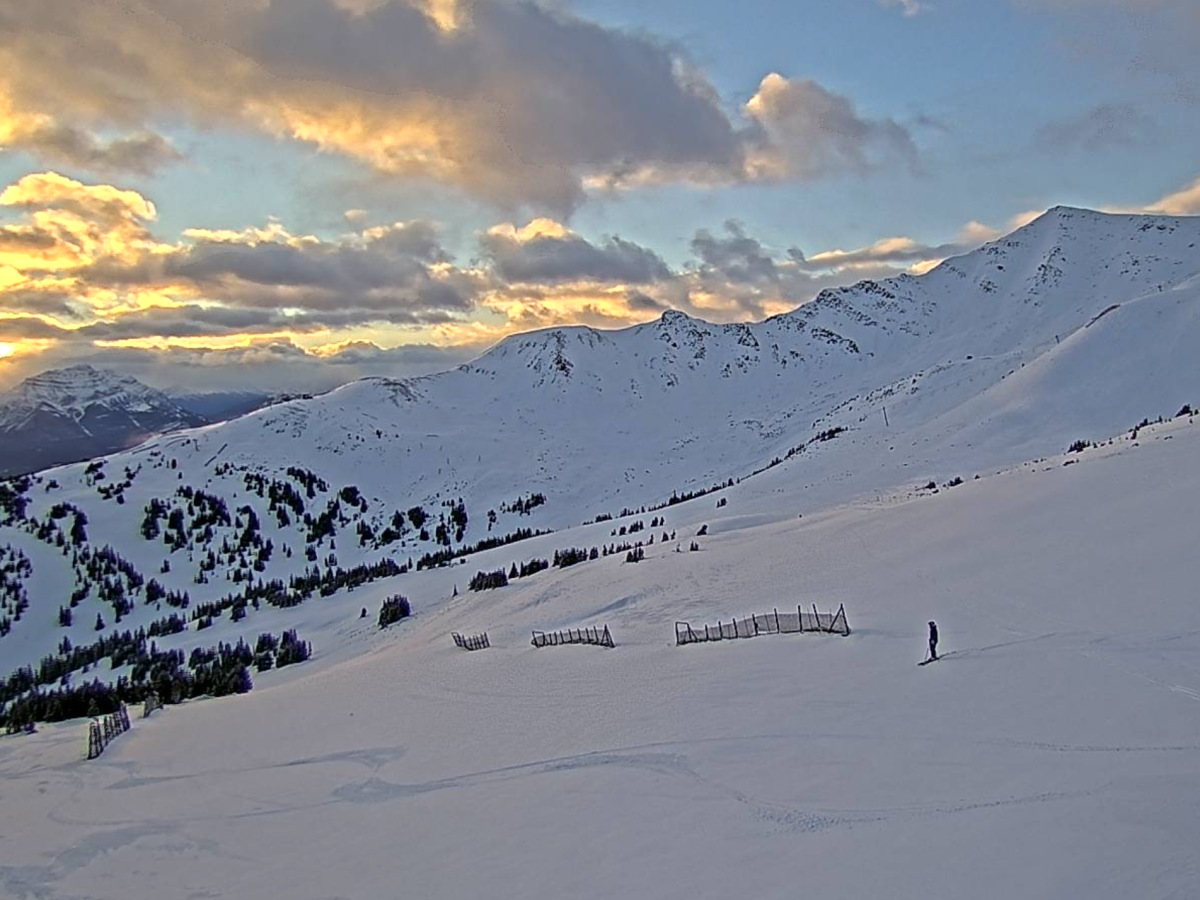 A northwest (NW) flow aloft will be hanging around all week bringing in mostly cloud cover but also a few weak disturbances with trace accumulations to a few centimeters possible, mainly Tues night and again on Thurs. Big changes are in store beginning Friday as arctic air is drawn in from NWT that looks to clash with Pacific moisture over the Rockies that could result in significant snowfall.

Below: The alpine splendor of Marmot Basin on a sleepy Monday
morning. 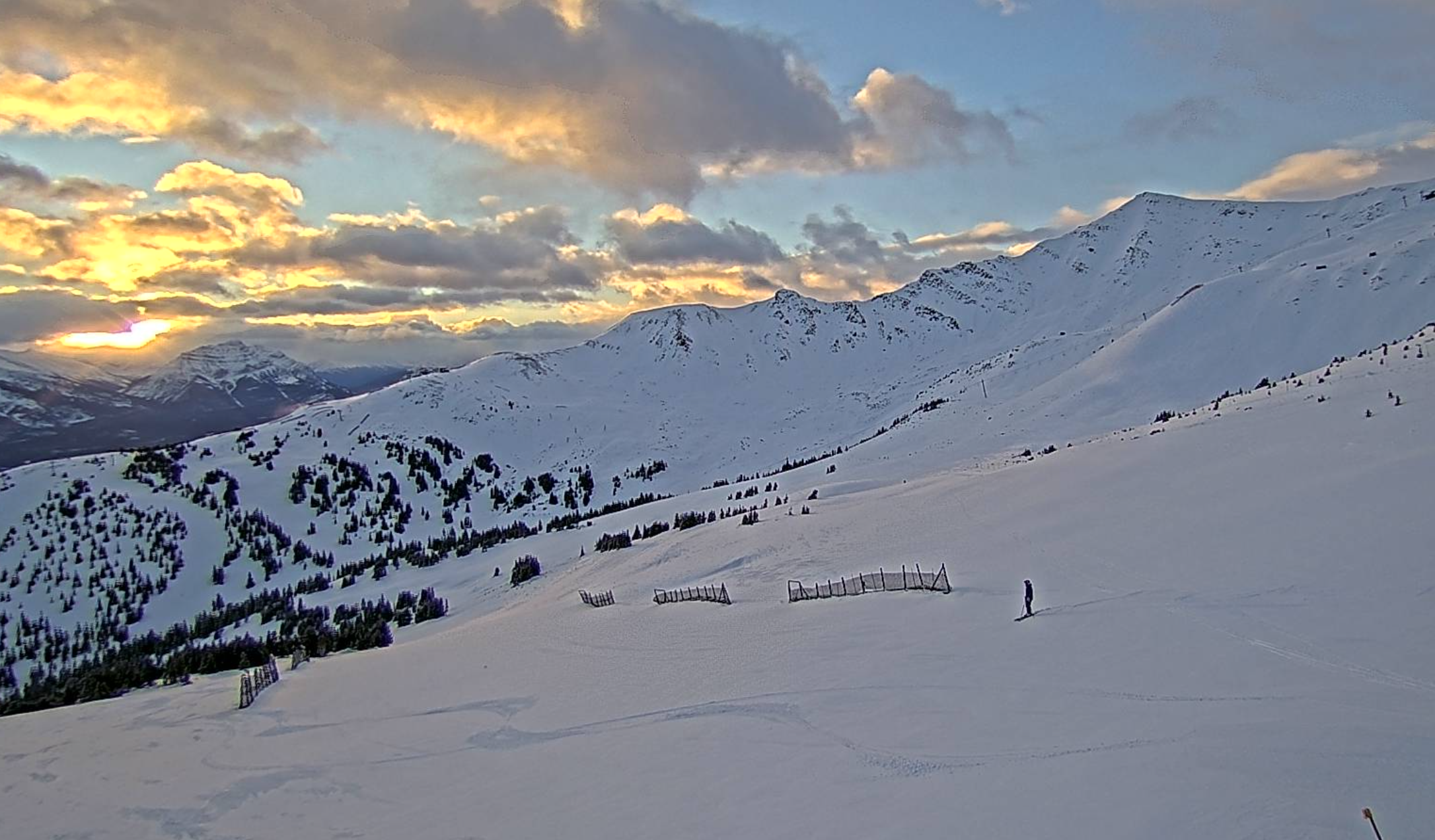 Below: Flurries have already started Monday morning at Sunshine Village. 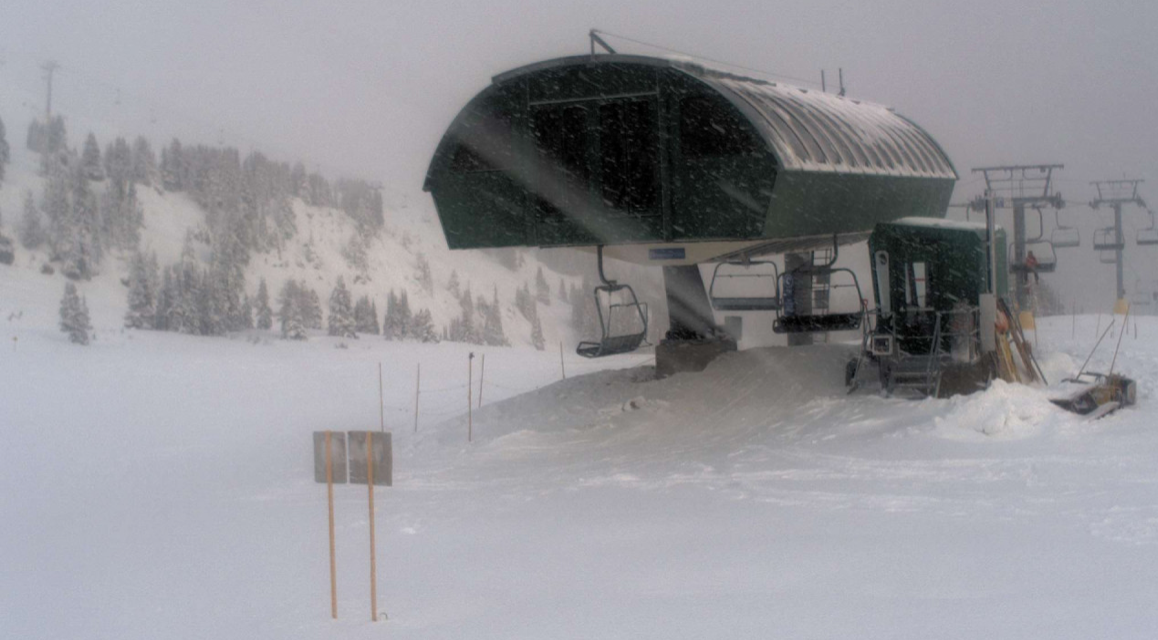 Monday: A ridge of high-pressure over the Rockies gets bumped westward by an advancing cold front Monday morning. Generally, a cloudy day across the range with widespread flurries along the Divide. A good chance for trace to 3cm in accumulation at Sunshine, and possibly Castle Mountain. Moderate to high west winds across the alpine at mainly Castle and Nakiska with 40 – 60 kph gusts. Light to moderate W/SW winds for the SkiBig3 resorts and Marmot Basin. High temps at 2200m of -6C to -11C.

Tuesday: High-pressure rebuilds in from BC on Tuesday but with a NW flow aloft. expect some cloud cover and possibly a stray flurry to mix in with the sunny skies across the range. Slightly warmer but seasonal temps with alpine highs (2200m) of -5C to -10C. Light to moderate W/SW winds changing over to the NW during the afternoon hours.

Wednesday: A weak disturbance riding out of northern BC will brush the Divide from mainly Banff north to Jasper bringing trace accumulations up to a few cm’s at Sunshine, Louise, and Marmot overnight on Tuesday. Ridging will rebound for Wednesday with mainly cloudy skies and a few sunny spells. Slightly warmer temps with highs at 2200m of -3C to -6C. Light to moderate W/NW winds.

Thursday: NW flow aloft will transport a fast moving shortwave over NE Alberta overnight Wednesday and into Thursday morning that may bring some flurries to the eastern slopes of the Rockies from Lake Louise north to Marmot Basin. Trace accumulations to 5cm are possible. For the rest of the range, a mix of sun and cloud for Naksika and Norquay, with mostly cloudy skies with an isolated flurry at Sunshine and Castle Mountain. Warmer, alpine highs at 2200m of -2C to -4C. Light to moderate W/SW winds, gusty on the ridgetops.

Friday: Consensus is growing among the weather models for arctic air to be pulled into the region on Friday. This strong arctic cold front will be moving in from the NE and depending on the timing, is expected to meet up with a Pacific shortwave moving into the Rockies from BC potentially bringing heavy snow through the day on Friday. At this point, widespread significant accumulations of 15 – 25cm look possible but there still are lots of details to be worked out. Temps are expected to plummet behind the cold front for a rather frigid weekend.

Below: Canadian model for snowfall across BC and AB. The time is Zulu (or GMT). Subtract 7 hours for Mountain Time. Thursday night, the arctic air looks to meet up with Pacific moisture and is portrayed to pile up along the Alberta Rockies Friday into Friday night. Stay tuned...

Saturday morning, residual snow showers with possibly another few cm’s likely across the South Rockies and along the Continental Divide. Arctic high-pressure looks to settle over the Alberta Rockies through the upcoming weekend. Plan on a mix of sun and cloud with frigid surface temperatures. For instance, the forecasted high temperature at 2200m  elevation at Lake Louise on Saturday is -21C (-7F).

The arctic ridge is expected to dominate the weather through the middle part of next week. Temps will be slowly moderating, but it will still be quite cold with high alpine temps -15C to -18C daily through next Wednesday.

Below: European model animation for surface temps for the period Saturday 1/28 through Wednesday 2/1. The pink shades signify the frigid arctic airmass.

Thanks for tuning in. Next update, Wednesday 1/25.