Update on the East Troublesome fire and the upcoming snow storm 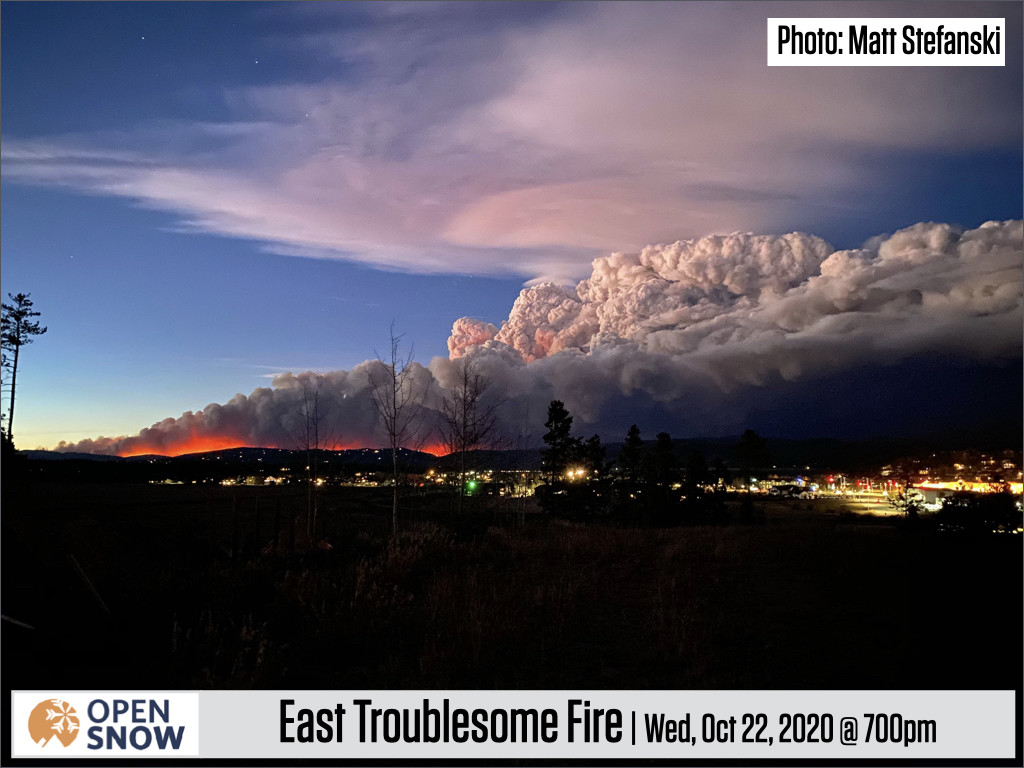 The East Troublesome Fire grew at a shocking speed on Wednesday afternoon and Wednesday night, forcing the evacuation of Grand Lake and likely resulting in many lost homes and structures. I'll provide a weather update concerning the fire and also details about the snowstorm coming on Sunday and Monday.

Many fires are burning across Colorado. On Wednesday and Wednesday night, it seems like most fires grew slowly with no surprises.

However, the East Troublesome fire, which is north of Winter Park Ski Area (NOT a current threat to the ski area) and was roughly between Kremmling and Grand Lake, exhibited shocking growth on Wednesday afternoon and Wednesday night.

The smoke plume rose to over 30,000 feet in elevation and the resulting pyrocumulus clouds (clouds that are created by the fire) produced a few cloud-to-cloud lightning strikes late on Wednesday night.

This picture, which was sent to me by an OpenSnow fan that lives in Winter Park, is a view of the fire on Wednesday night looking north from Winter Park toward Granby and Grand Lake. 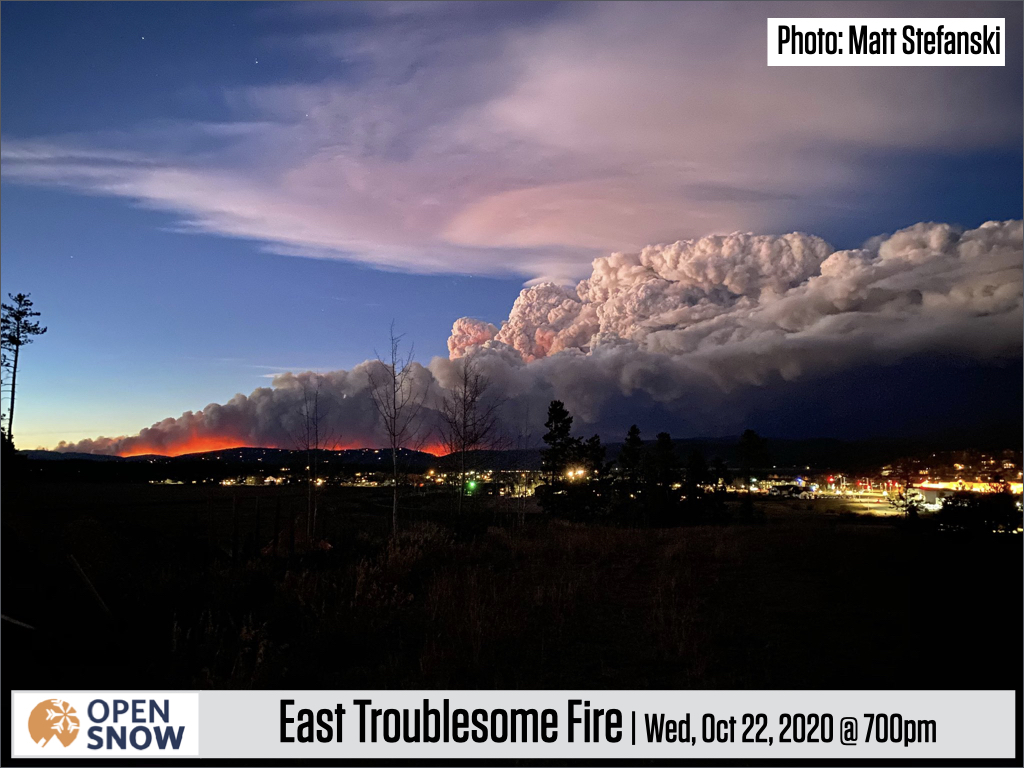 I am writing this post before the sun is up on Thursday morning and there has not yet been an aerial mapping effort to understand the exact numbers around how much the fire has grown because all focus on Wednesday evening was on evacuating residents and firefighting operations. The fire size that is announced on Thursday will likely be very, very high.

What I show below is a satellite view of the fire from Wednesday morning through Thursday morning. The extremely fast growth occurred on Wednesday afternoon and Wednesday night and was driven by strong winds, a dry atmosphere, and beetle-killed deadwood throughout the forest.

The animation above is from the NOAA GEOS-16 satellite and was created by the College of DuPage. You can view the animation here.

The Colorado Daily Snow is supposed to be about snow, but I have to mention the current reality that we are dealing with many wildfires. I hope that first light on Thursday results in a better-than-expected damage assessment around Grand Lake.

The weather for the next few days will be mixed in terms of the risk of additional wildfire spread for the East Troublesome fire. Thursday will be another dry and windy day, then on Thursday night the wind will switch, slow, and cooler temperatures and more moisture will arrive. Friday should be calm and cool. Then Saturday will be very windy, especially during the afternoon and evening. Finally, on Saturday night, a cold front will arrive with precipitation and very cold air. This weather perspective is just for the East Troublesome fire as the timing of colder air and wind shifts will be different for the other fires across the state.

The smoke plume from the East Troublesome Fire is absolutely massive, and it'll likely continue to cover the sky until the snow arrives on Sunday night. Below is the forecasted smoke on Thursday at 600am. 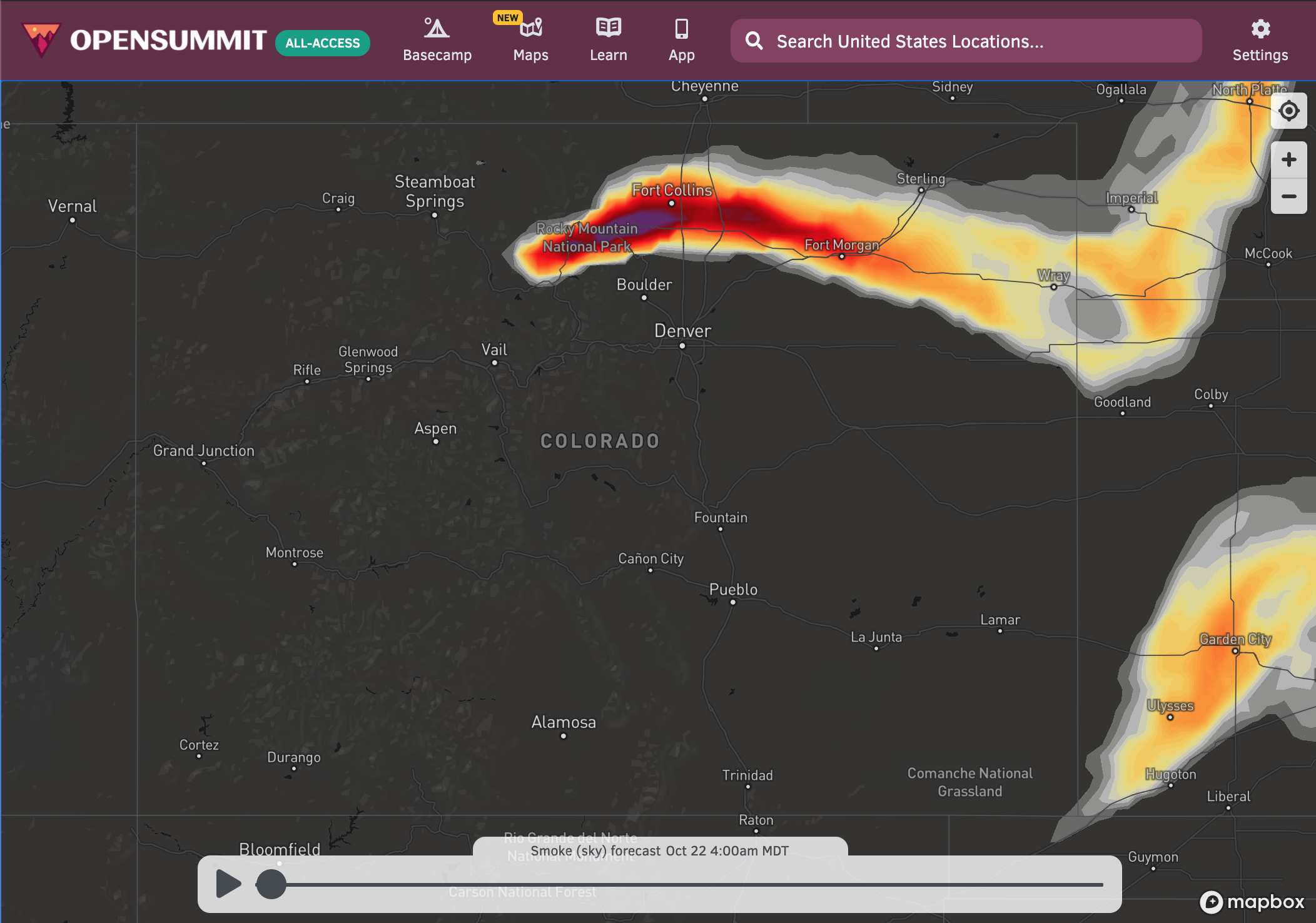 The smoke forecast is updated every hour and extends 18 hours into the future. You can find it on our OpenSummit website and mobile apps.

The smoke forecast is an All-Access feature, but, anyone can view it for free for two days when they go to the OpenSummit website, and by registering with an email address, the smoke forecast is free for another 10 days. So please use this forecast and tell your friends as it's helpful (and really the only high-resolution way) to understand where the smoke will be.

Like the satellite image above, the smoke forecast is also a NOAA product. While the government may not use all of our tax dollars in the way that you'd like, the weather data that we take for granted, and is incredibly helpful for monitoring air quality and wildfires, would not be possible without our funding of NOAA and the hard work of very smart government and university employees. Remember that nearly every weather product you see here on OpenSnow or EVERY weather app or website or TV station has a foundation in data that's funded by our tax dollars. I wanted to write this reminder because, while I am very proud of the effort our team put into turning the raw smoke forecast data into a beautiful and easy-to-use mapping service, we wouldn't even have this data without our collective tax dollars.

Again, here is the link to the smoke map on OpenSummit.

Best wishes to those of you in the Grand Lake and Granby area. Evacuating with short notice and watching such a scary fire must be unimaginably difficult.

Snow storm on Sunday and Monday

Back to talking about snowflakes.

Saturday night into Sunday morning is when the storm will start over the northern mountains.

On Sunday, there should be a band of intense snow over the northern mountains.

Then from late Sunday into Monday, the band of intense snow should shift to the southern mountains.

The areas that see these intense bands will likely measure more than one foot of snow. Other areas should measure at least a few inches.

Here is the total precipitation forecast from the European model (most models agree with this forecast). I outlined the two areas where a band of intense precipitation should create the highest snow totals. Any area in orange could see 12-20 inches. 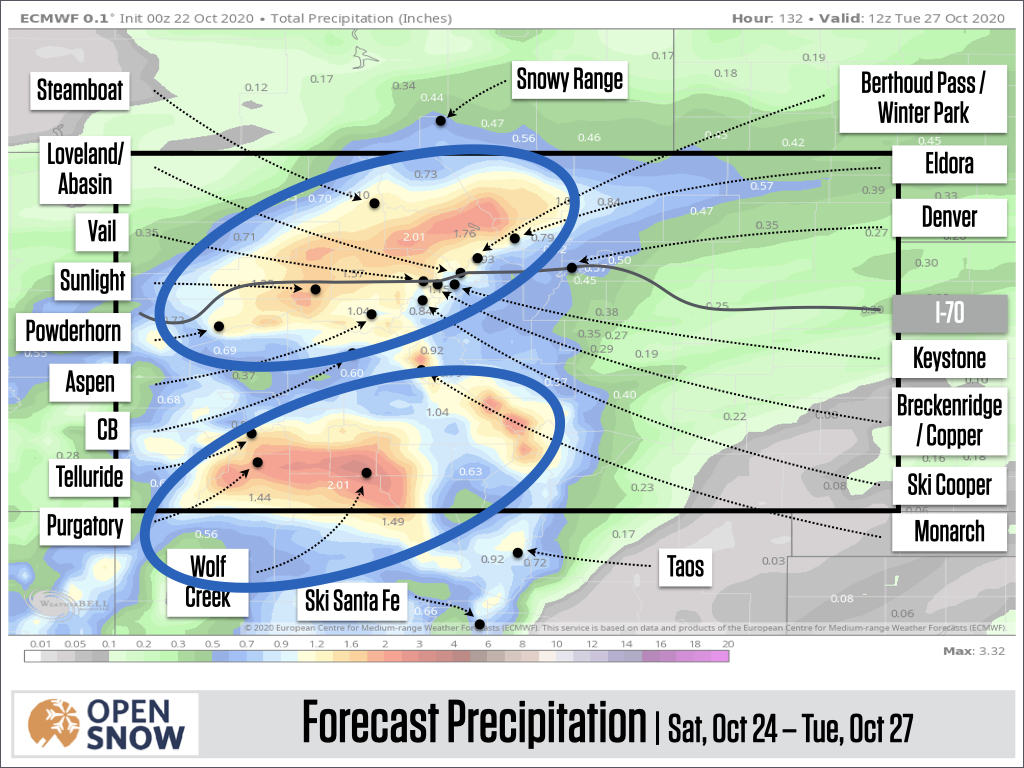 The reason that we'll see two areas of intense precipitation is that there will be two pieces of jet stream energy (known as "jet streaks") that will create the bands of precipitation.

The first piece of jet stream energy will move over the northern mountains on Sunday. 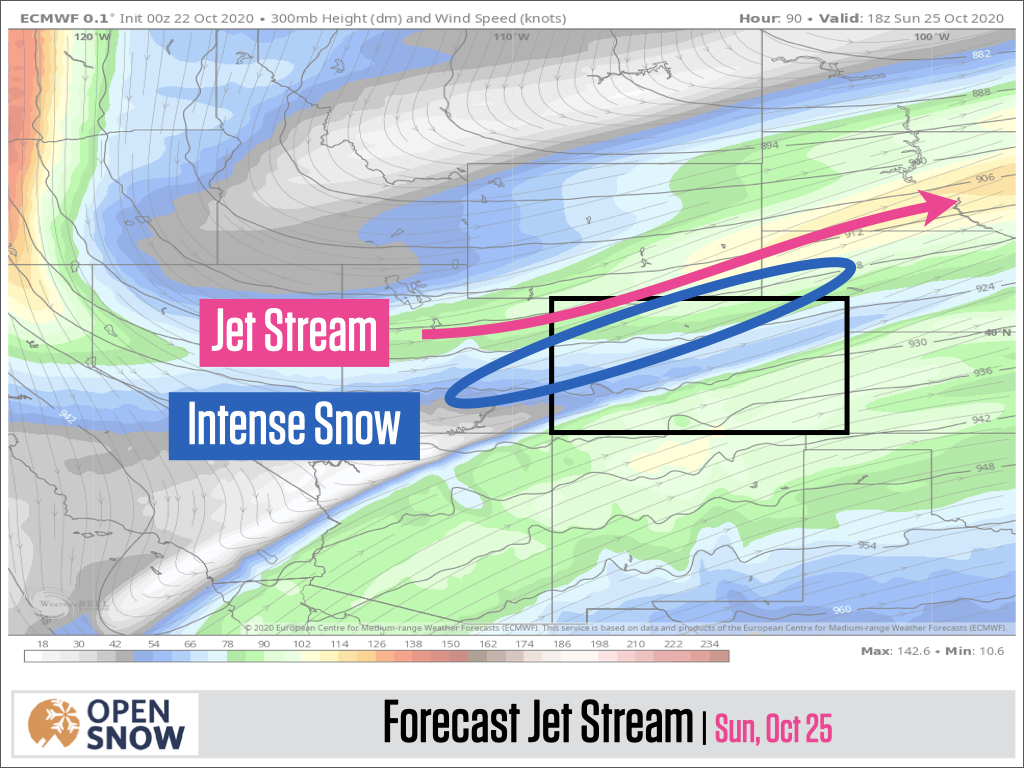 The second piece of jet stream energy will move over the southern mountains on Monday. 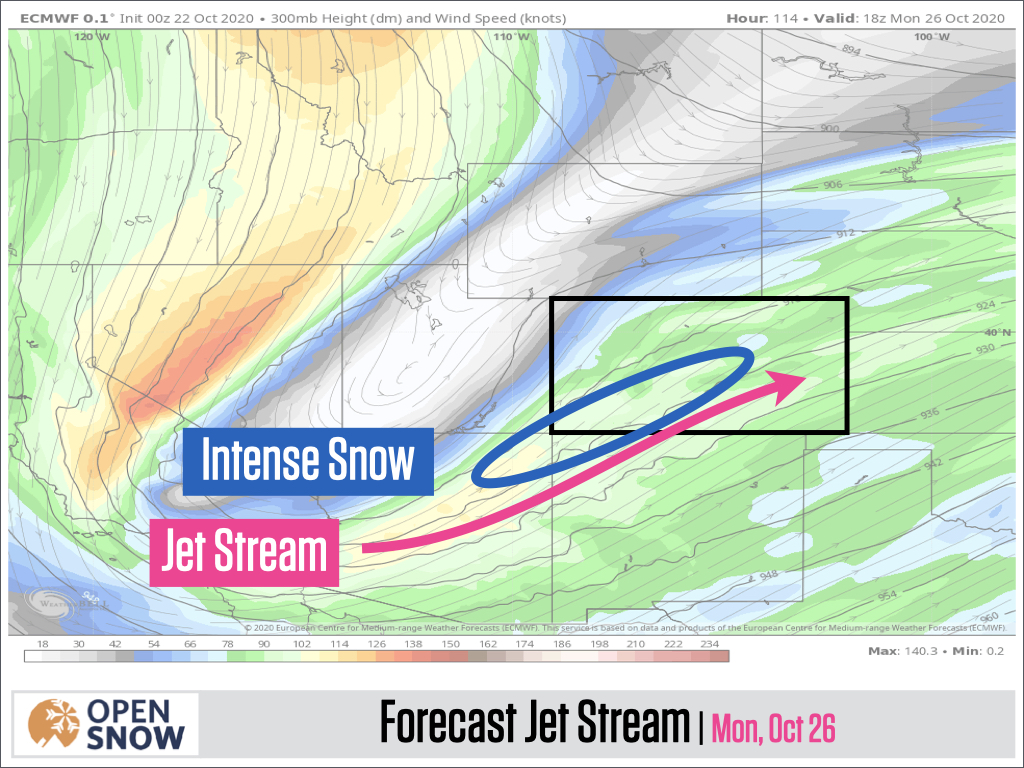 These jet streaks will be the primary driver of the most intense snowfall. Most models are in general agreement about where the intense snowfall will be, but these bands will be somewhat narrow and a few mountains might miss them while other mountains get clobbered. If the forecast models hold steady through Thursday, then I'll come back on Friday morning with a detailed discussion about snow totals by location.

Oh, with the excitement around snow, I almost forgot to mention the cold. Sunday will be getting cold, and Monday will be very cold. Temperatures might dip below 0°F on Monday and highs could be in the single digits to teens.

There is no change to the extended forecast.

Next week should slowly warm up and there could be some light precipitation continuing if the storm takes its time leaving to the east.

Then early November looks dry. That means the upcoming storm will be a one-and-done system. Let's hope it provides a LOT of snow to the dry areas and the wildfires so that we will not need to talk about shockingly fast wildfire growth again in 2020.

PS - We just released a new All-Access subscription. It's a Group Subscription that's only $10/person/year for four people. It works just like a family plan on Netflix or Spotify, for example. You sign up and then invite three friends or family members or complete strangers that you want to be friends with. Each person gets their own list of favorite mountains, customer alerts, etc. If you already have an All-Access subscription, you can upgrade to the Group subscription in just a few clicks. As an incentive to try it out, our friends at Powder7.com ski shop are giving away a helmet + goggle combo and the only thing you need to do to enter to win is to be an All-Access Group subscriber by October 31st. So sign up now:-) Read more info about All-Access Groups and sign up.