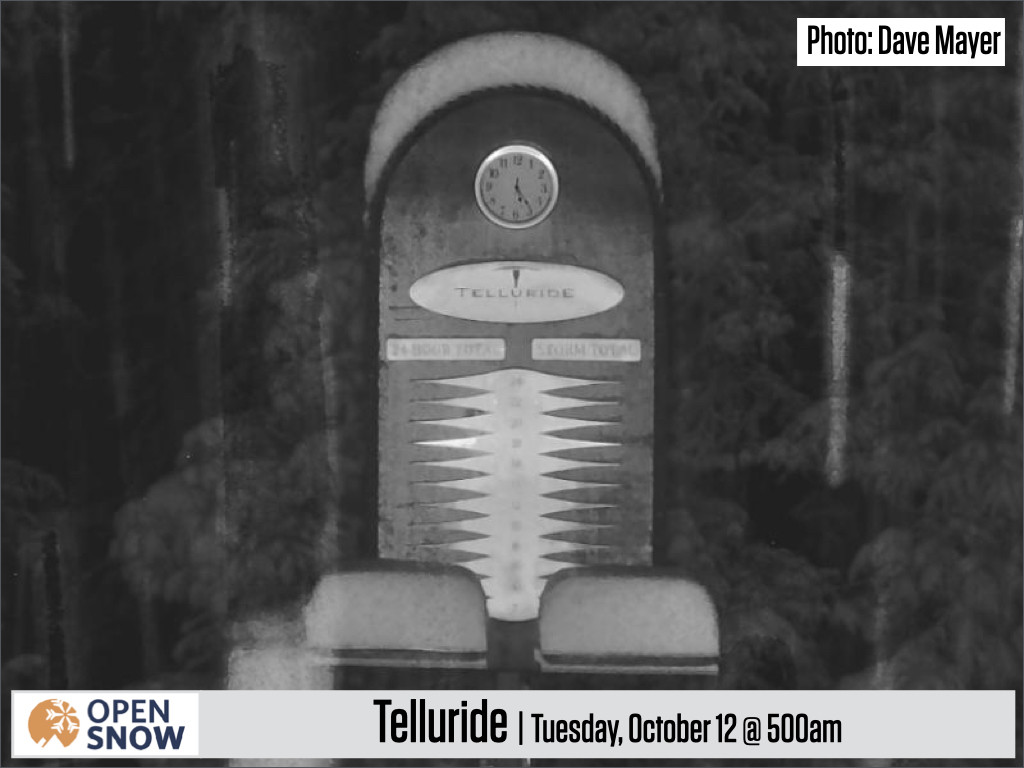 On early Tuesday morning, snow started to fall on some southwestern mountains with 1-4 inches of accumulation by sunrise. We'll see snow showers on Tuesday and Tuesday night with at least a few inches everywhere and the best chance for ~10+ inches in the southwestern and far northern mountains. A second round of up to 6 inches of snow will fall on Thursday and Thursday night.

It's going to be a fun week of weather. 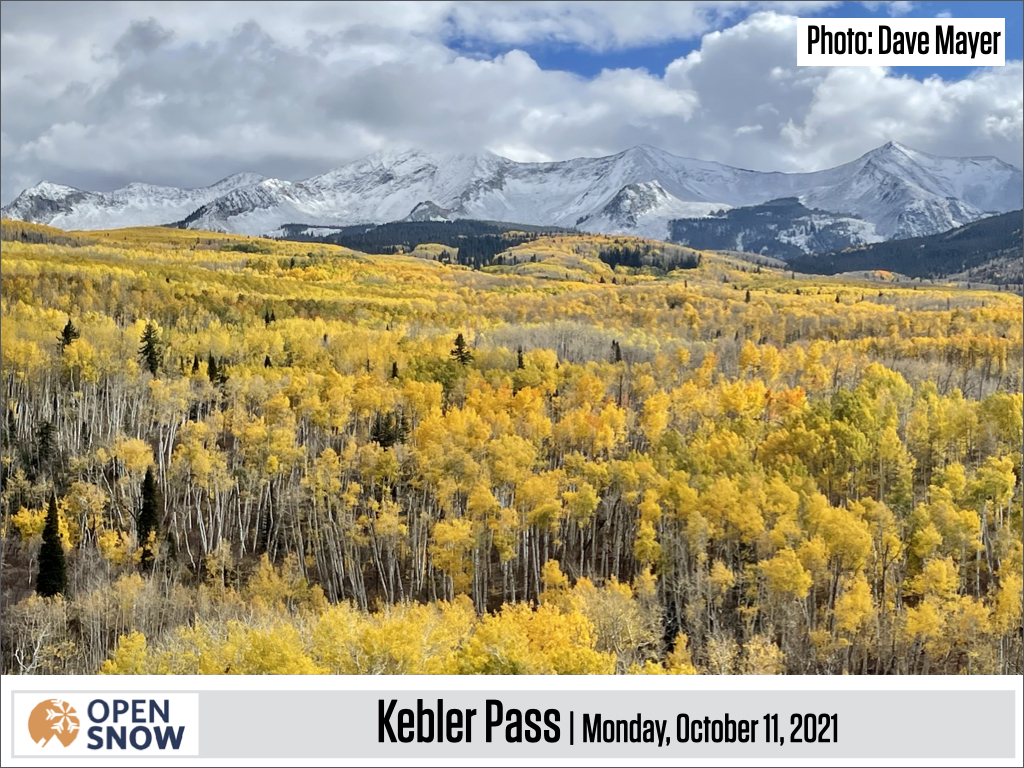 And then on late Monday night, the switch flipped and we transitioned into storm mode with 1-4 inches of snow already accumulating in the western-southwestern mountains around Telluride and Purgatory.

As of Tuesday at 500am, Telluride's snow stake cam shows 4 inches. 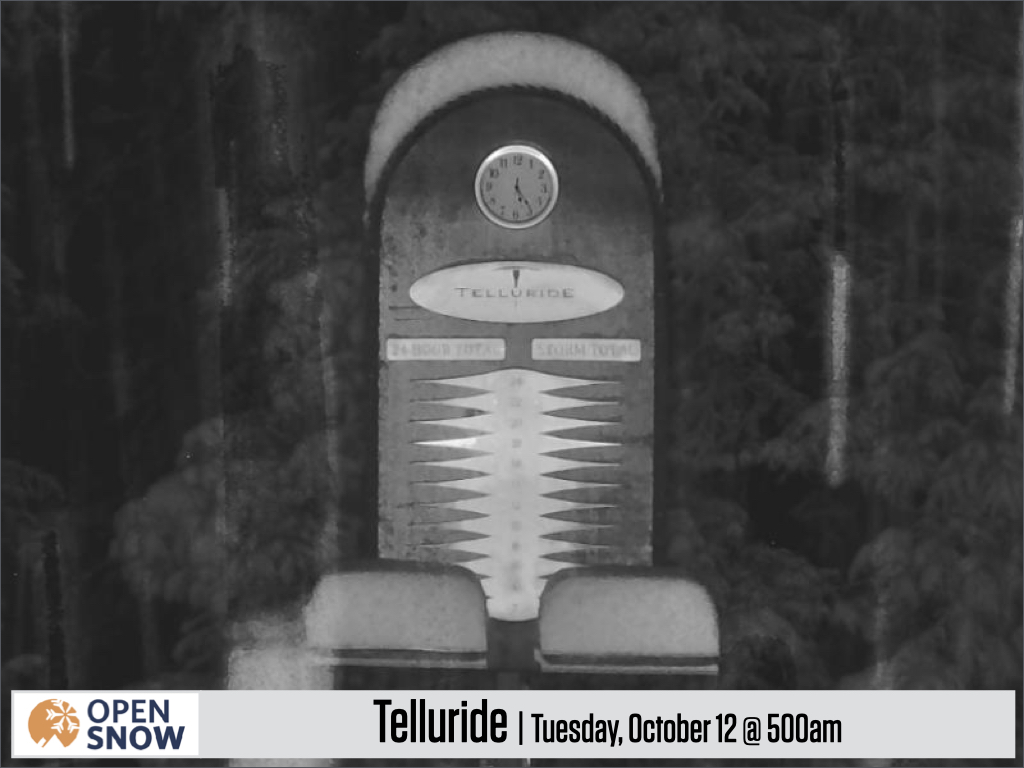 As of Tuesday at 500am, Purgatory's snow stake cam shows 1-2 inches. 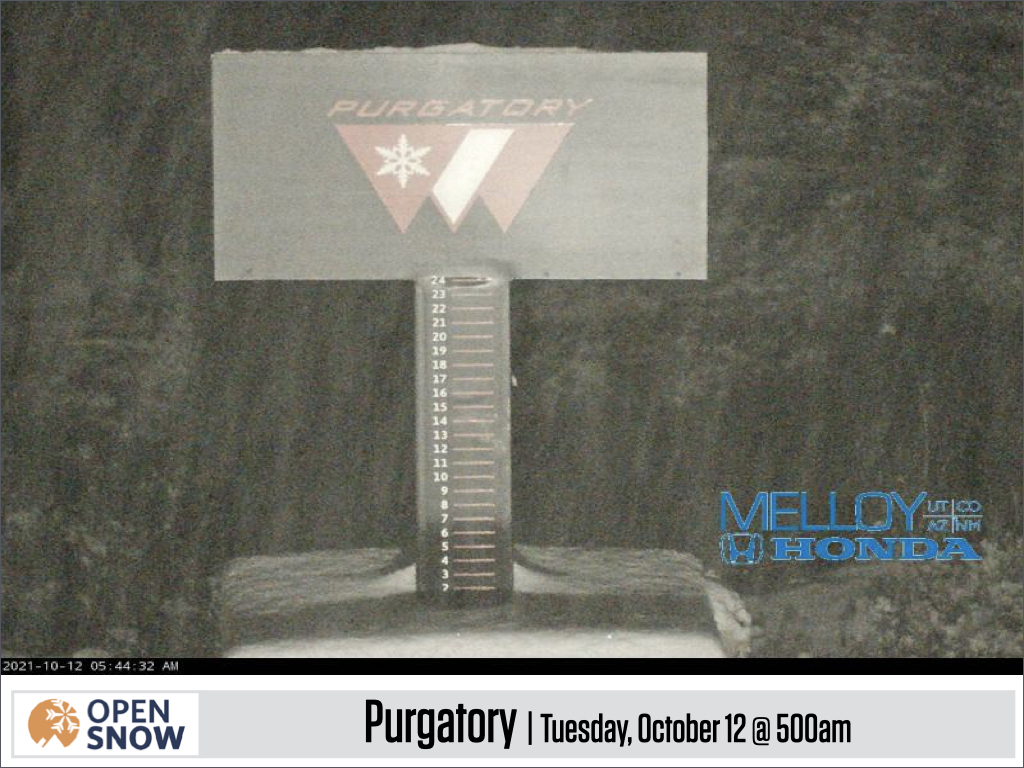 Nearly all of the mountain cam images I show in the Colorado Daily Snow are available to view on the OpenSnow website and mobile app, and every cam image can be viewed as a 24-hour timelapse as well, so you can see for yourself when the snow fell.

All mountains will see periods of intense snow showers and also periods of drier weather in between the showers. While the wind direction from the southwest will favor the deeper accumulations over the southern mountains, any mountain could see an intense shower that drops 1-2 inches in an hour. The snow level should lower throughout the day from 8,000-9,000 feet in the morning down to 5,000-6,000 feet (around valley bottoms) in the late afternoon.

Snow will continue, likely steadier as compared to the more showery snow on Tuesday during the day.

A wind from the west and storm energy focused on the northern mountains should combine to create the most snow on mountains far north of I-70 (around Steamboat and the divide around Cameron Pass). A west wind is also favorable around the central mountains near Aspen and just west of Crested Butte, though most models are not showing much snow for these central mountain resorts, which is curious (the forecast for the higher Elk Mountain Range just west of these resorts does, of course, show more snow).

Double-digit totals of 10+ inches are likely over the southern mountains and the far northern mountains, with a wide range of lower amounts in between these locations. As I mentioned, the snow on Tuesday will be showery, and that makes it hard to forecast accumulations as any random shower can drop a quick 1-2 inches in an hour on one mountain while leaving a nearby mountain drier.

The multi-model snow forecast for Tuesday + Tuesday Night looks like this. 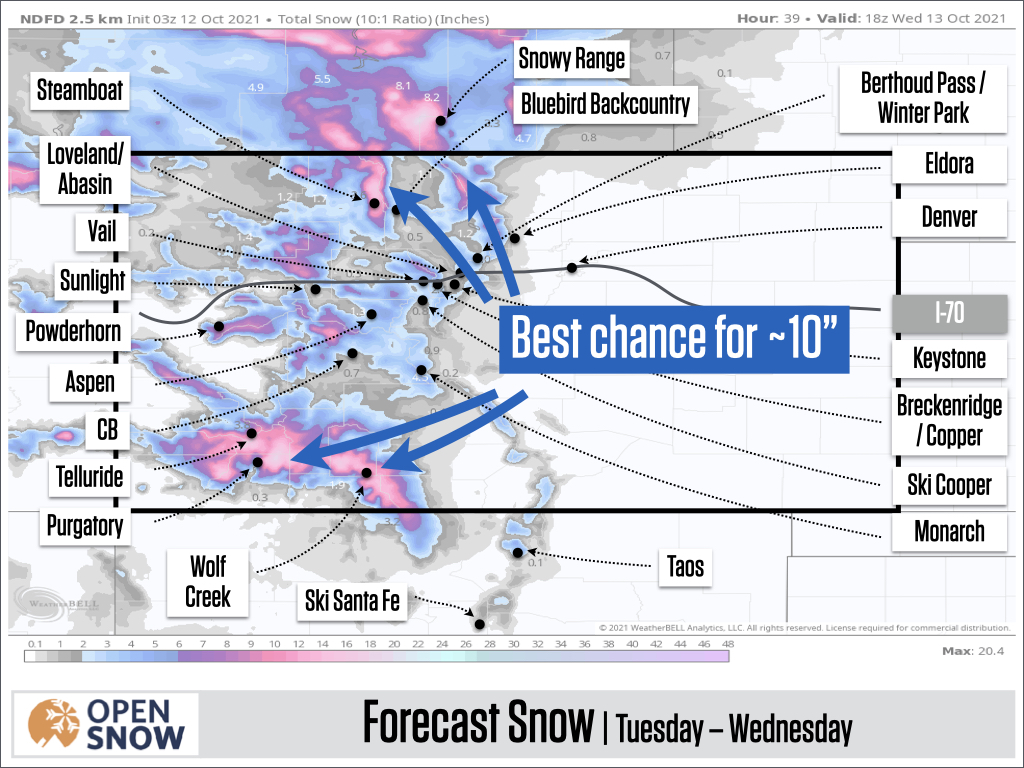 Then from Wednesday midday through Wednesday night, snow accumulations will end.

Temperatures during this period will be cold which will allow for efficient snowmaking at many mountains.

The second round of snow will begin on Thursday morning, continue throughout the day, and end by late Thursday night or early Friday morning.

Total accumulations should be 2-6 inches for most mountains, roughly split between Thursday-day and Thursday-night.

The areas near and east of the divide should see the most snow as a wind from the north and northeast will favor these areas. 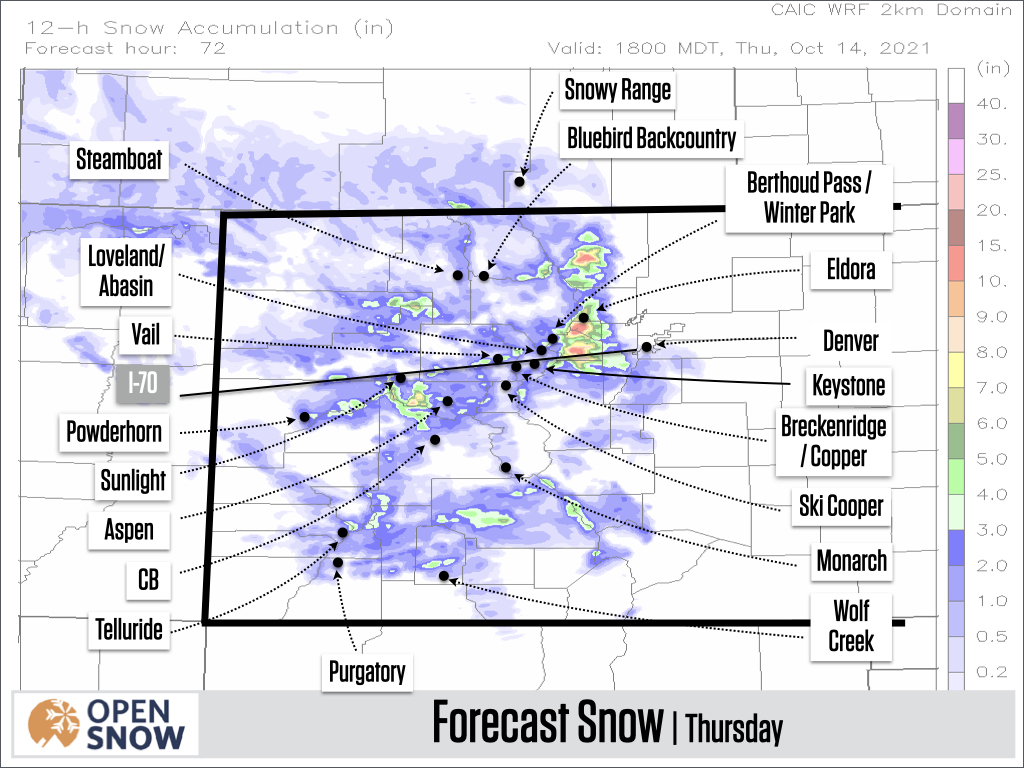 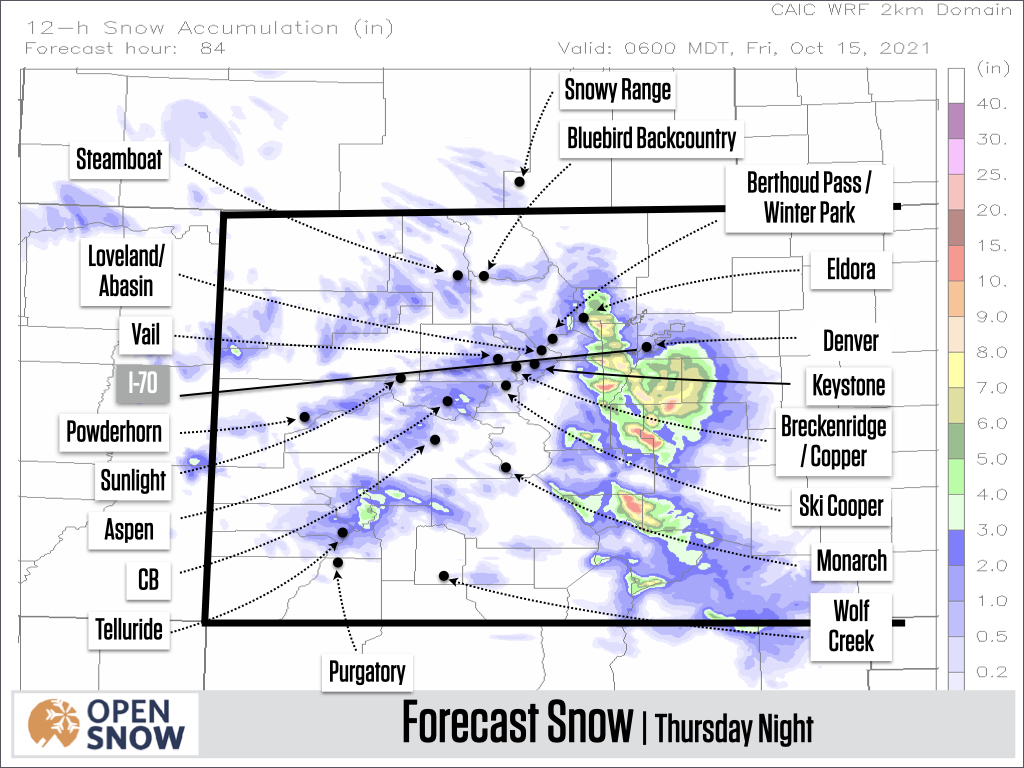 Nearly all models, and not just the CAIC WRF 2km model, show roughly the same forecast for Thursday and Thursday night, so I feel pretty confident in an additional few inches of snow for most areas and higher amounts closer to and east of the divide.

It should be a good week for snowmaking with cold temperatures from Tuesday afternoon through Friday midday and likely 24/7 snowmaking during this time.

I'm looking ahead to the next two weeks this way.

From about Saturday, October 16 through Sunday, October 24, we should see mostly dry and warmer weather. An area of colder temperatures and stormy weather should stay along the west coast and at best, maybe we'll see a scrap of storm energy with a few showers one day.

From about Monday, October 25 through the end of October, that area of storminess over the west coast should push east and likely will bring us a higher chance for cooler air and some snow. It's too soon to know if we'll see significant precipitation during the final week of October, but at least chances for some precipitation should be much higher than the previous week.

You can see the eastward translation of the area of storminess over the west coast in the maps below. 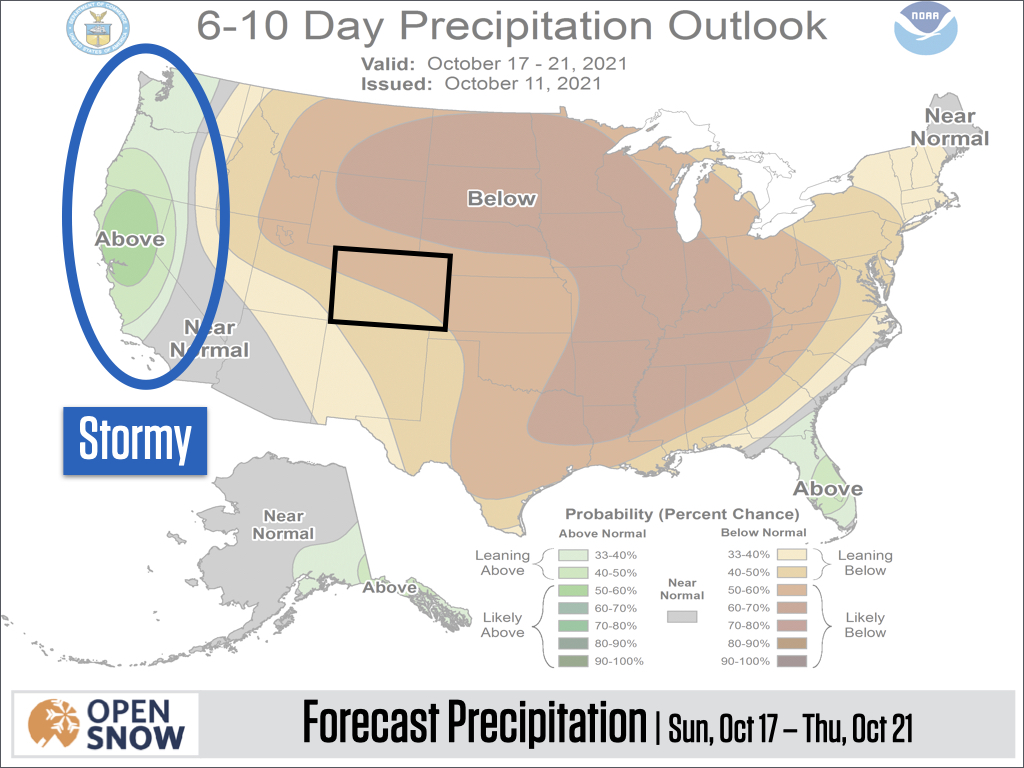 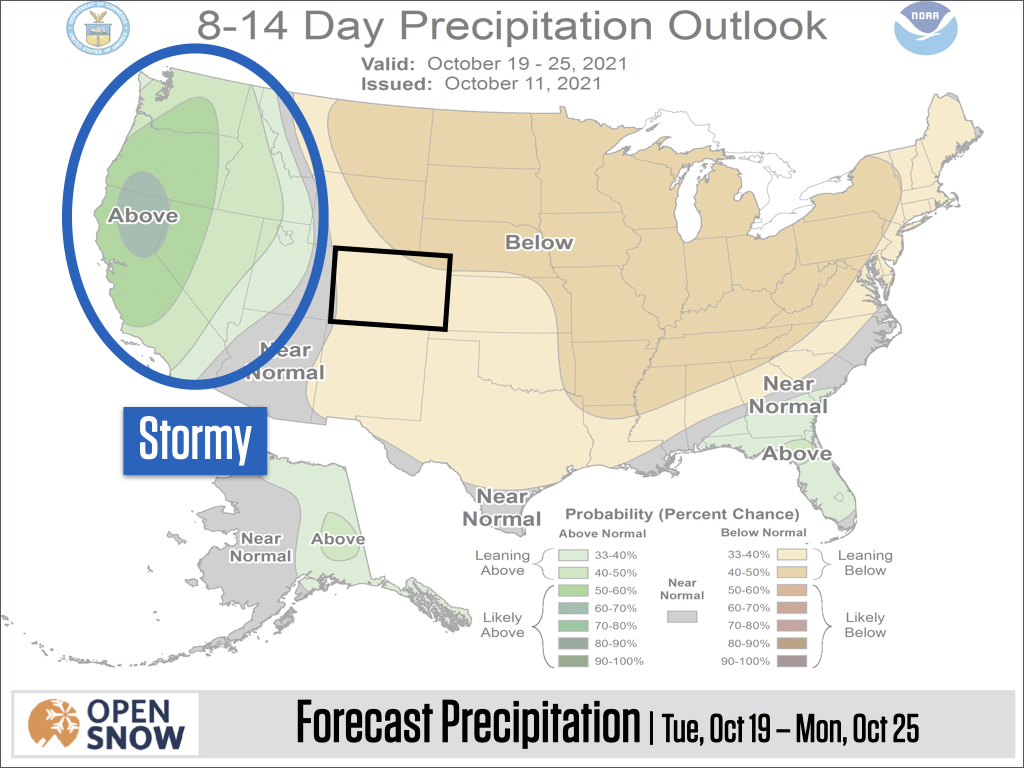 While we won't see much or any natural snow next week, nighttime temperatures should be cold enough for continued snowmaking at some mountains, but conditions will likely not be ideal with warmer weather during the days.

In the meantime, enjoy the storm, and if you head out to find a spot to make turns, have fun and watch for sharks!