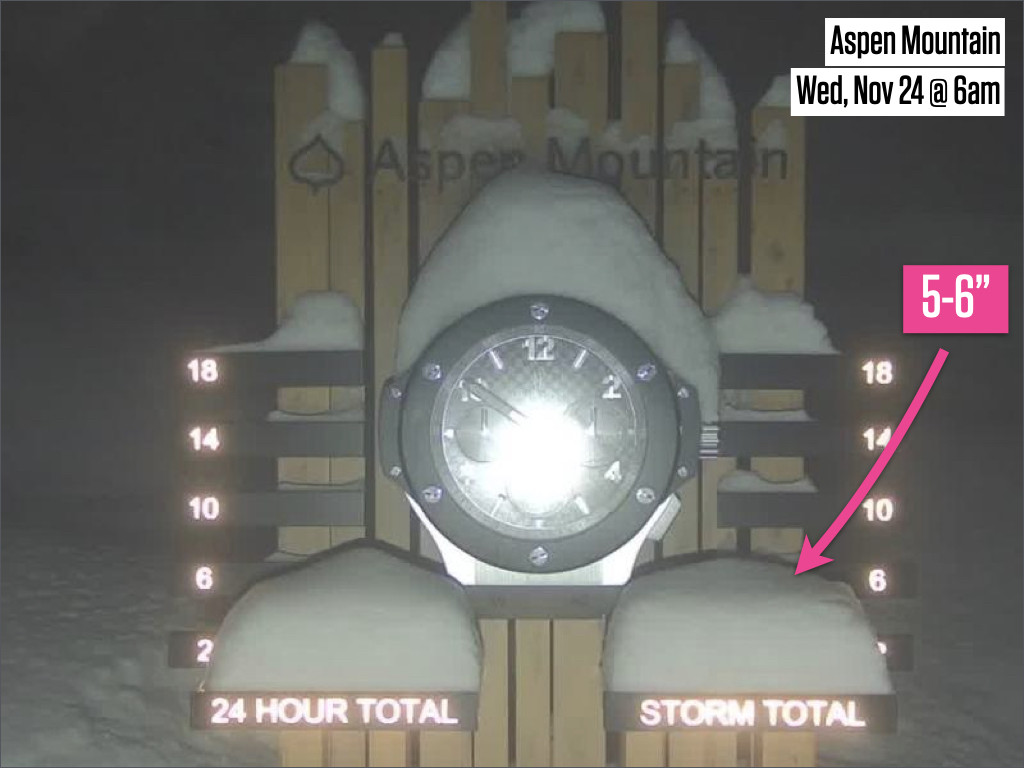 A disjointed storm is moving through Colorado on Wednesday morning. Most mountains have picked up 1-3 inches though the Aspen area is getting 'bonus' snow with 4-7 inches on the snow stakes at sunrise. We'll see more snow through Wednesday late morning, then snowfall should wane. Starting on Thanksgiving, we'll see dry weather for at least one week.

Tuesday was dry, then this week's storm arrived on Tuesday night. Going into the storm, our highest confidence was for 2-4 inches of snow in the southern mountains, and elsewhere, we had lower confidence elsewhere with likely just light accumulations.

As of Wednesday morning at sunrise, the snowfall in the southern mountains came through as expected with about 3 inches at Purgatory, Red Mountain Pass, and Wolf Creek. At most other mountains, snowfall has been a coating to 2 inches. (Update 700am: Now 3 inches at Eldora, 4 inches at Crested Butte).

There have been a few surprises. Steamboat shows 3 inches at the summit, and the biggest surprise is in the Aspen area where totals are 4-7 inches across the three main mountains (Aspen Highlands, Aspen Mountain, and Snowmass). There will be more than this as flakes continue to fall for a few more hours. 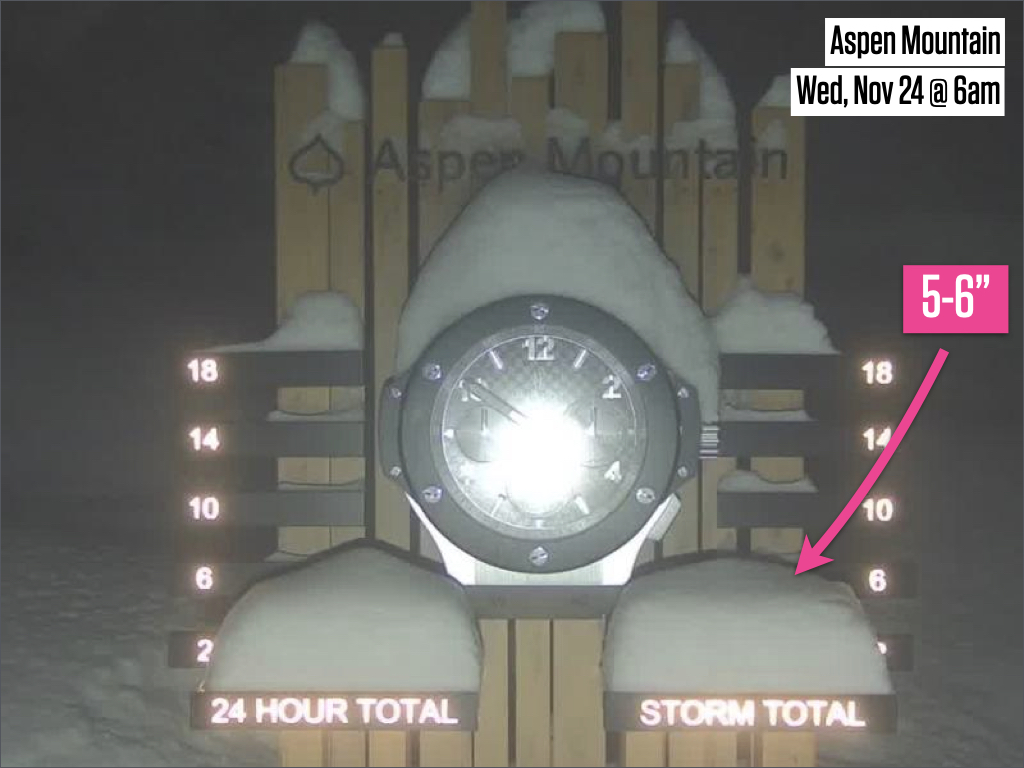 The likely reason for the 'bonus' snow at Aspen (and Steamboat) is a brief yet productive combination of moisture, a cold front (which helped to lift the air), and maybe most importantly, a wind that switched from southwest to west, which is the favored direction for these mountains. Also, luck is playing some role as a few stronger cells are happening to track directly over Aspen.

For the day on Wednesday, the best chance for more accumulating snow will be during the morning as moisture and a favorable wind direction (from the west-southwest in the south to west-northwest in the central, to the northwest in the north) stick around. After about Wednesday midday, it looks like moisture will wane and the wind speed will slow, likely leading to fewer showers and an end to most accumulating snow for most major mountain areas. Temperatures will be steady of fall through the day on Wednesday and be chilly Wednesday night (single digits and teens). This should allow for snowmaking all day Wednesday and through a lot of Thursday. Also on Wednesday night, the east side of the Sangre de Cristo range will be favored for some snow as our storm moves away.

From Thanksgiving through the middle of next week, we'll see no snow and high temperatures in the 30s and 40s. Nighttime lows should be cold enough for snowmaking, so there could be limited terrain openings evening without more natural snow. The storm track will stay far to our north during this period. Even if the forecast is a little off and storms track a little closer to Colorado, any snowfall still seems like a very very low possibility.

Our next chance for a storm will be around Friday, December 3rd. During the last few days, the chances for a storm around this time have decreased across many models. That doesn't mean we're out of luck, but I'm not as confident about a storm around the 3rd as I was a few days ago.

Generally, the longest-range models are still showing that early-to-mid December will be active (stormy) across the western US, but that's all I can say right now. There's no guarantee that this storminess will track into Colorado. Our current high-elevation snowpack ranges from 40-80% of average (and these numbers will decrease with no snow during the next week or so). We are below average, though early-season averages can be misleading as one big storm can bring the numbers way up. Let's hope that early-to-mid December brings one of these big storms.