An amazing yet unsatisfying forecast 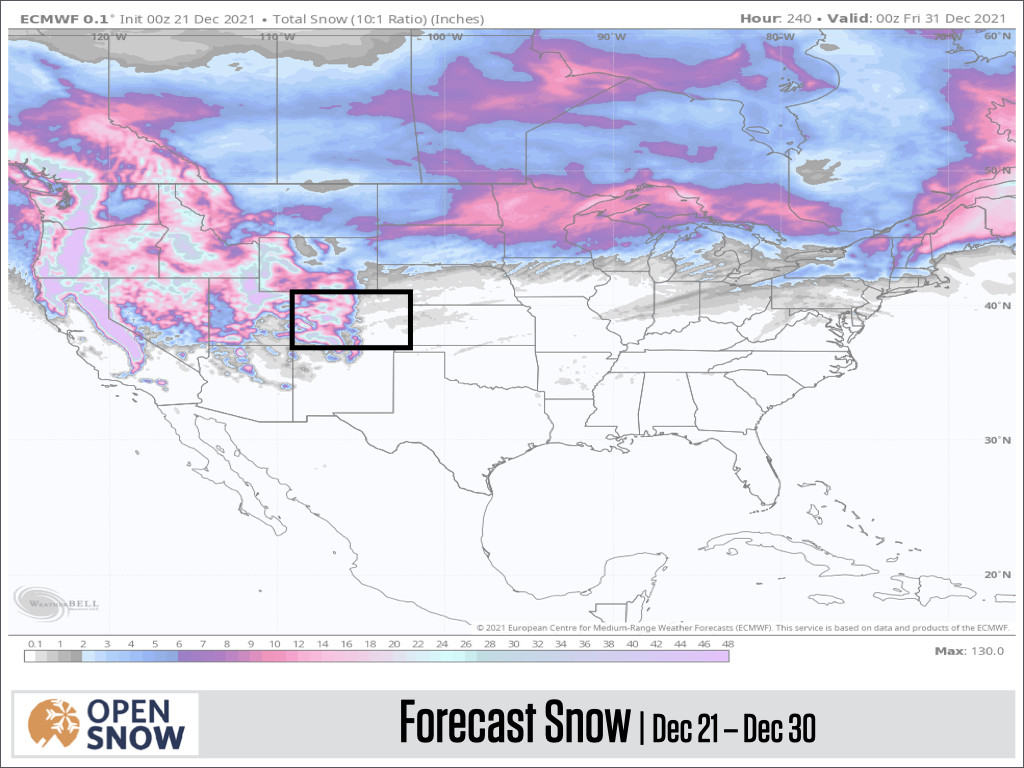 Tuesday and Wednesday will be dry. Then we could see snow every day from Thursday, December 23 through at least early January 2022. But there's a catch. I have confidence that there will be a lot of snow during the next 10+ days yet I have near zero confidence as to when we'll see the most snow. Let's take a look at the potential snowfall ahead of us.

Good Tuesday morning from Jay's Cabin, part of the three Shrine Huts on Vail Pass. The way in is short enough for kiddos (or to pull kiddos), and also, the Verizon/Xfinity cell signal is super strong which is allowing me to research and write this forecast. So let's get to it.

Tuesday and Wednesday will be dry, sunny, and warm with highs in the upper 20s to low 30s. There will be some high clouds filtering the sunshine at times.

After Wednesday, I'm not sure that we'll see a fully dry day until next year. Since all of the upcoming weather action will extend into the longer-range time period, I put all of the storm details below in the Extended Forecast section.

This is an odd forecast. There is so much potential, but yet, I have very little actionable advice.

The snowfall that's heading to Colorado is part of a larger area of storminess that will cover most of the western US and western Canada. Snow totals during the next 10 days will exceed a foot or two for nearly every state to our west and northwest. California could be the bullseye with up to 10 feet of snow. 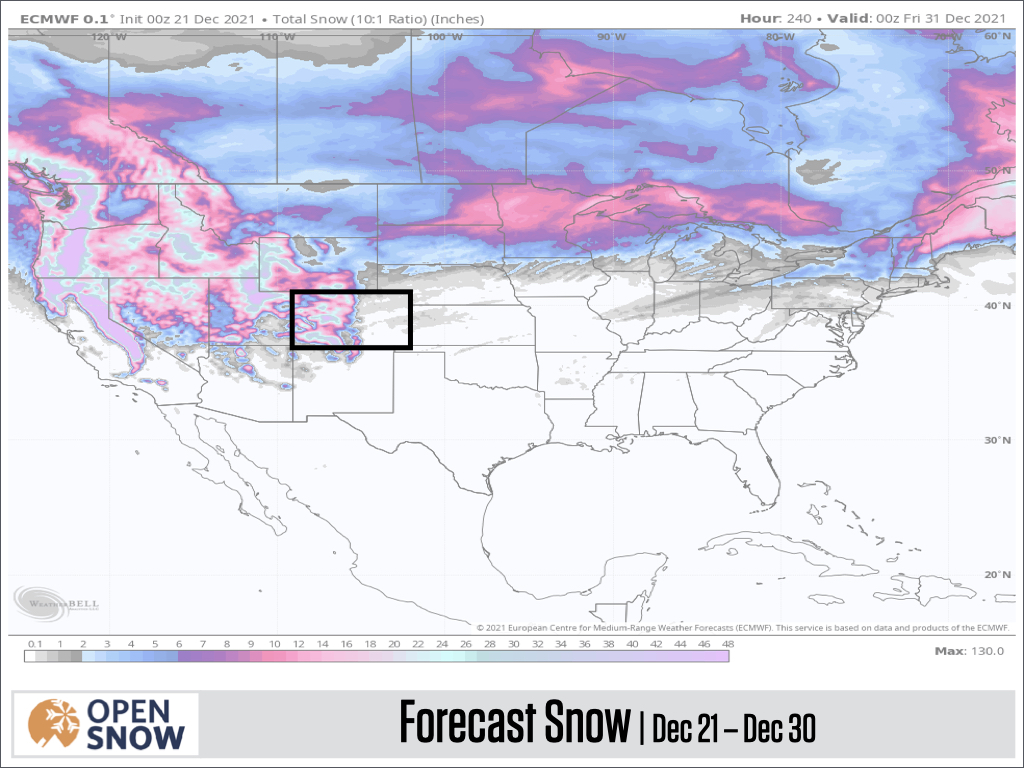 Here in Colorado, Wolf Creek often tops the list of most snowfall when storms bring winds from the southwest and west-southwest, and our homegrown terrain-adjusted forecast from multiple versions of the American GEFS model is going bonkers for the next 10 days at Wolf Creek. Not only is the model going bonkers for precipitation, it also shows how little confidence we have in the total amount of precipitation, which ranges from about 2 inches to about 8 inches over the next 10 days. That's a range of roughly 2-8 feet of snow.

Perhaps the part of the forecast that gets me the most excited is that all models show that this stormy pattern over the western US will continue into the first few days of 2022. 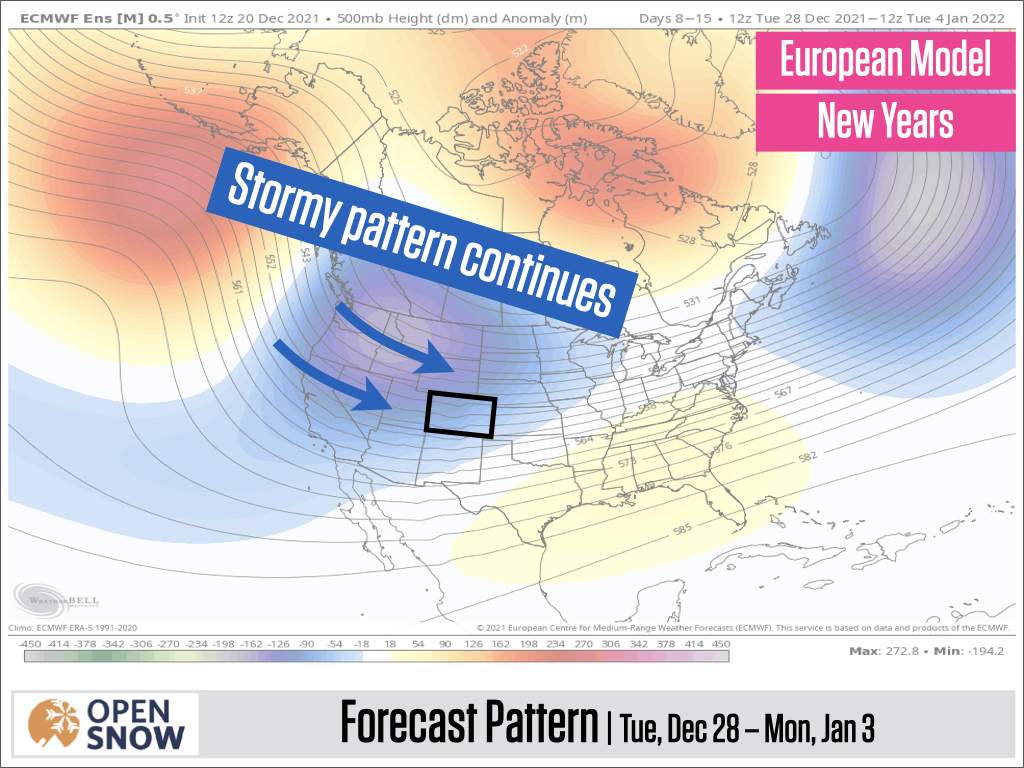 And not only do models shows that storminess will continue into the first few days of 2022, but both the European and American GEFS models (below) show that the stormy pattern will continue for most of January as well. I do not trust any specific weather forecast weeks in advance, but we can place some trust in forecasts for the general weather pattern weeks in advance. 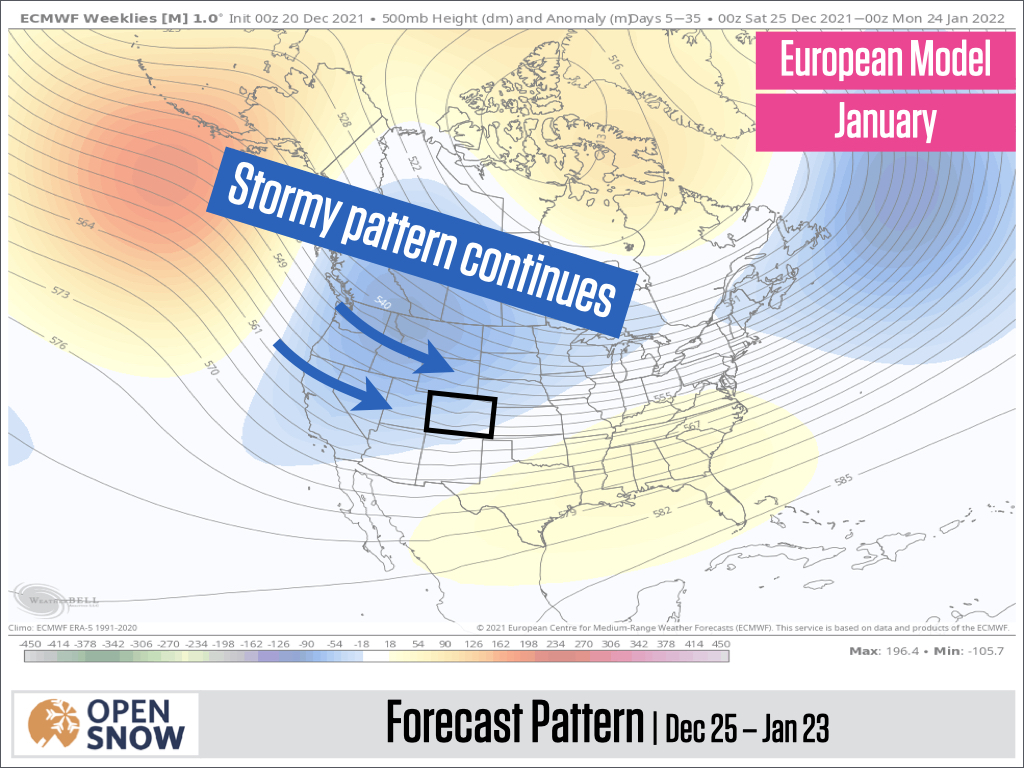 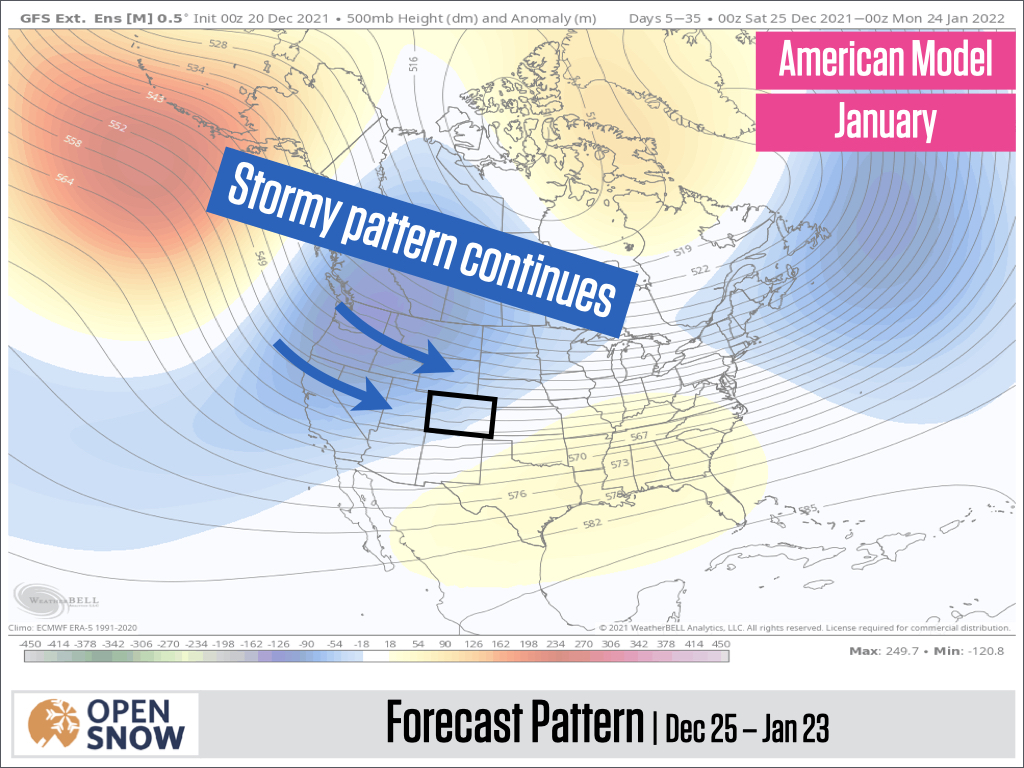 What does this mean for powder days here in Colorado?

I think we are still on track for the first round of powder on Friday, though I am less confident in the details of the forecast than I was yesterday, so I'm not going to talk about the timing of the snow or the amount of snow as I just don't know. Trust me, I wish I could give a detailed forecast as I am also trying to plan my holiday and powder schedule, but I'm just not sure.

To try to make sense of all of this, and to aid in your decision-making, I urge you to check out the detailed forecast for each mountain here on OpenSnow. Just search for the mountain of your choice, or add a bunch of mountains to your list of favorites and compare them.

The snow forecast that you see for each mountain is created by averaging multiple runs of multiple models, so if you see a signal for more snow on a certain day, or more snow at a certain mountain compared to another mountain, I would trust that signal since it's based on a lot of data that are averaged together. Of course, any forecast can go off the rails and turn out to be incorrect, but averaging a lot of data together and account of the effects of terrain usually works out to be the most accurate forecasting method.

Also, keep in mind that while it can be fun to head to the mountain with the most snow, or head out on the day with the most snow, in these types of multi-day stormy periods, it's useful to factor in crowds and operational issues (wind holds, avalanche control holds, terrain openings, etc) into your decision making. Sometimes, finding a moderate amount of snow and fewer people is more fun than finding the most snow and all the people.

Join me on YouTube Live on Wednesday, December 22 @ 700pm

I'll answer your questions (last time there were 40+ questions) and talk in detail about the upcoming storms. I share my screen during the entire live discussion and use graphics to visually explain the forecast. The last session was super fun and I hope that you can join this one. The screen is just me presenting, so there's no need to show your potentially unkept-mid-winter-disheveled face – just pop by to listen and watch:-)