Five storms between now and 2022 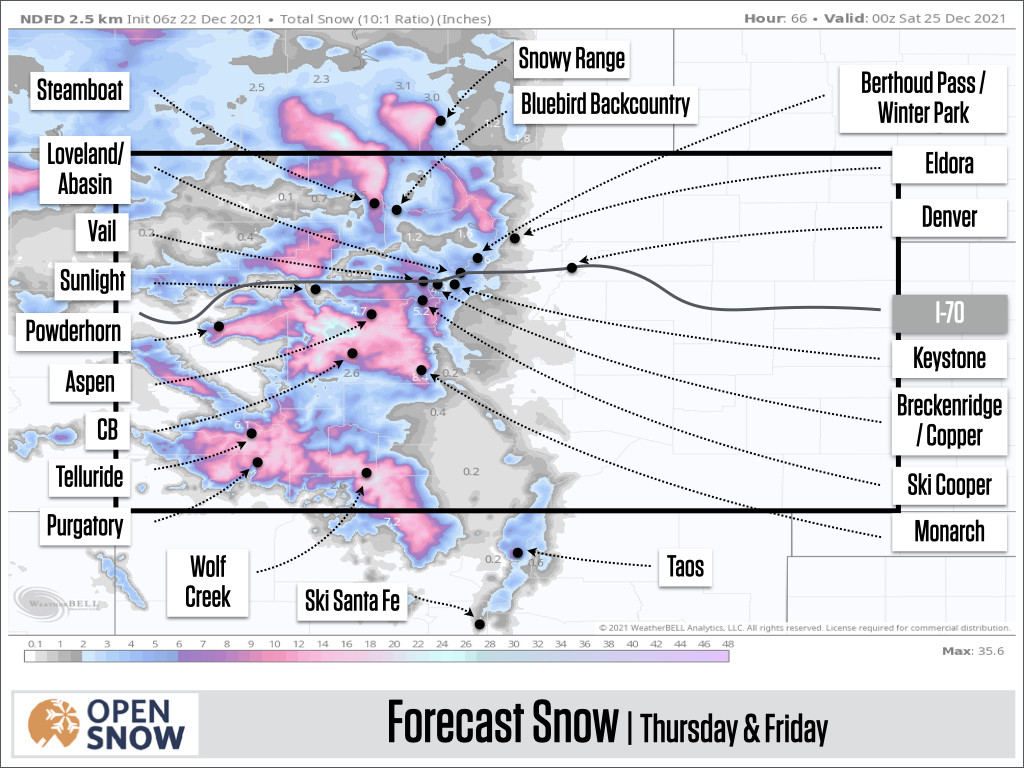 Wednesday will be the calm before the storm with dry weather and warm temperatures. On Thursday, snow will get going, but the most snow will likely wait to fall until Thursday night with intense snow continuing on Friday and Friday night. Total snowfall by Saturday morning should be 8-30+ inches. Then we will have four more storms to talk about…

Before getting to the forecast (which is very, very exciting), I wanted to share some pictures.

On Tuesday night, the moon was about 90% full, and with clear skies, some of the higher-resolution cams captured beautiful nighttime images of our snow-covered landscape.

The view of Breckenridge with the town, trails, and the ridgeline of the Ten Mile Range.

Vail's China Bowl (not yet open) with Mount Holy Cross in the distance on the left side.

The view toward Mount Sopris, just west of Aspen. 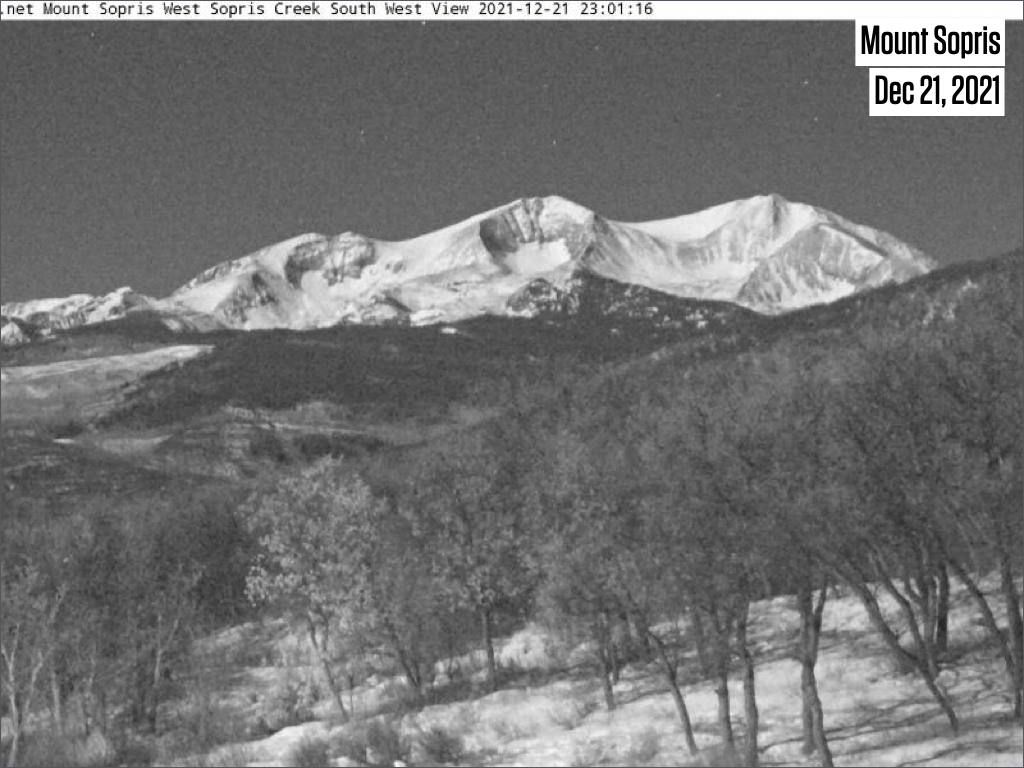 And this one is not a moonlit shot, but I am thrilled to report that we now have Sunlight's snow stake cam (and two other cams) on OpenSnow, just in time for the upcoming storm. 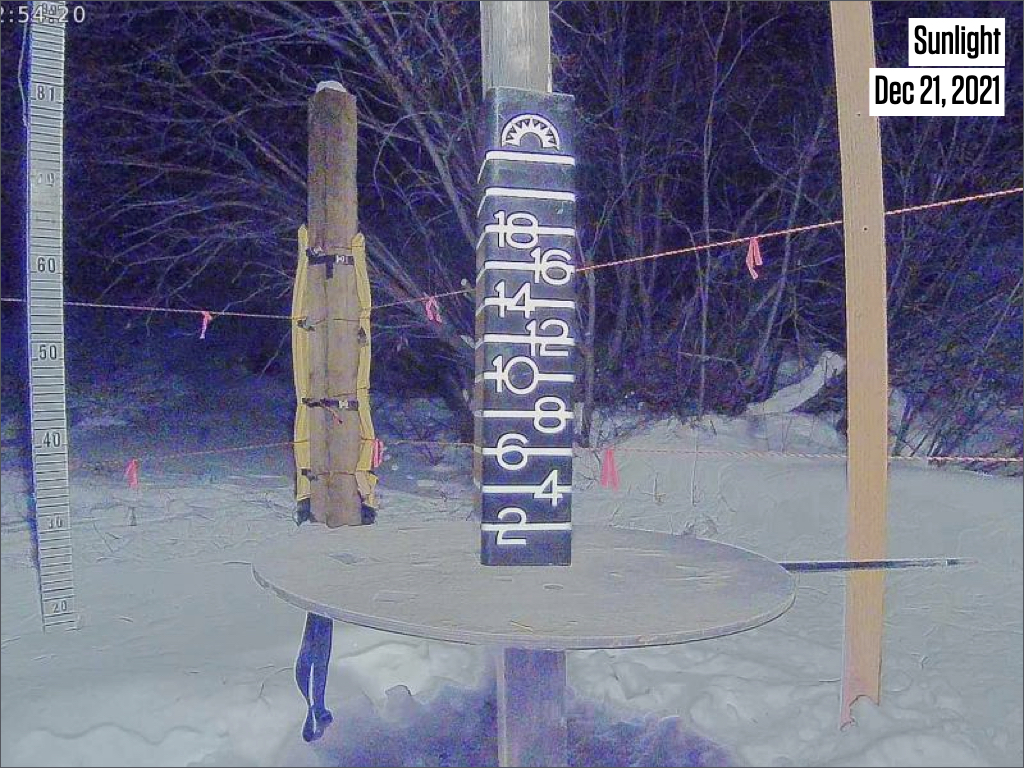 Wednesday will be the last fully dry day in Colorado for a while. Expect sunshine filtered by high clouds and high temperatures rising into the 20s and low 30s. It'll be a similar day to the last few days. Myself and my family (three generations!) are heading out to make turns at Ski Cooper as days on snow with four-year-olds generally work out better when it's sunny and not windy and dumping snow:-)

For all of the weather action coming up, scroll below to the Extended Forecast

Yesterday's forecast was big on excitement and light on details because I had low confidence about the timing of the incoming storms.

In today's forecast, I am going to discuss more specifics around each storm as there is now decent consensus among the models when it comes to the timing and the amount of snow.

Most mountains have only 20-60% of terrain open. But, the new snow coming from the next five storms should help most mountains open most of their terrain by around New Years. I cannot promise exactly what terrain will open at what mountain and when, but with consistent snow coming, I would be shocked if most mountains weren't mostly open in the next week or two.

For all of the storms mentioned below, the mountains farthest to the south and west have the best potential for the most snow due to the wind direction generally from the southwest, west-southwest, and west.

The Crested Butte and Monarch areas can do VERY well with a wind from the west-southwest but models struggle sometimes to forecast this exact wind direction. If we get this wind direction for a longer duration, watch out for higher totals for these areas.

For the mountains close to I-70, these areas will likely get less snow than other areas, but their snow totals will still be significant.

This could be the storm with the most snow, but due to warmer temperatures and wind, the snow quality might not be the best of all storms. No matter, this will be a great system to kick off our stormy period. Thursday probably won't bring much accumulation, but waves of intense snow on Thursday night, Friday, and Friday night will make up for it. Also, temperatures will be cold enough that most ski areas will see all snow, but just barely, with a rain/snow level fluctuating around 8,000 feet. I would not be surprised to see some rain at lower base elevations especially when the precipitation is not falling as heavily. That said, for most terrain that we ski/ride, the precipitation will fall as snow.

Below is the multi-model snow forecast for Thursday night, Friday, and Friday night. 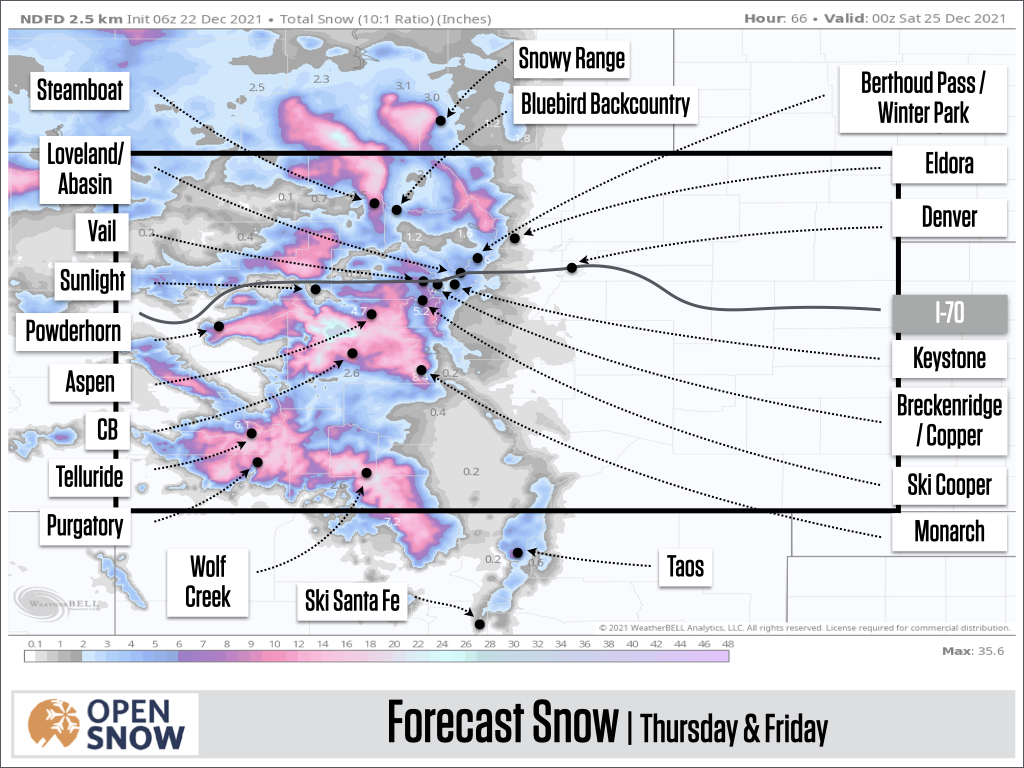 This storm should provide a refresh, and the snow quality will be fluffier thanks to somewhat cooler temperatures. Sunday could be a stormy day with freshies left on Monday morning.

The precipitation forecast for this storm has a similar pattern to the map above, with the most snow favoring areas farther south and west. In the map below, blue colors equate to 8+ inches. 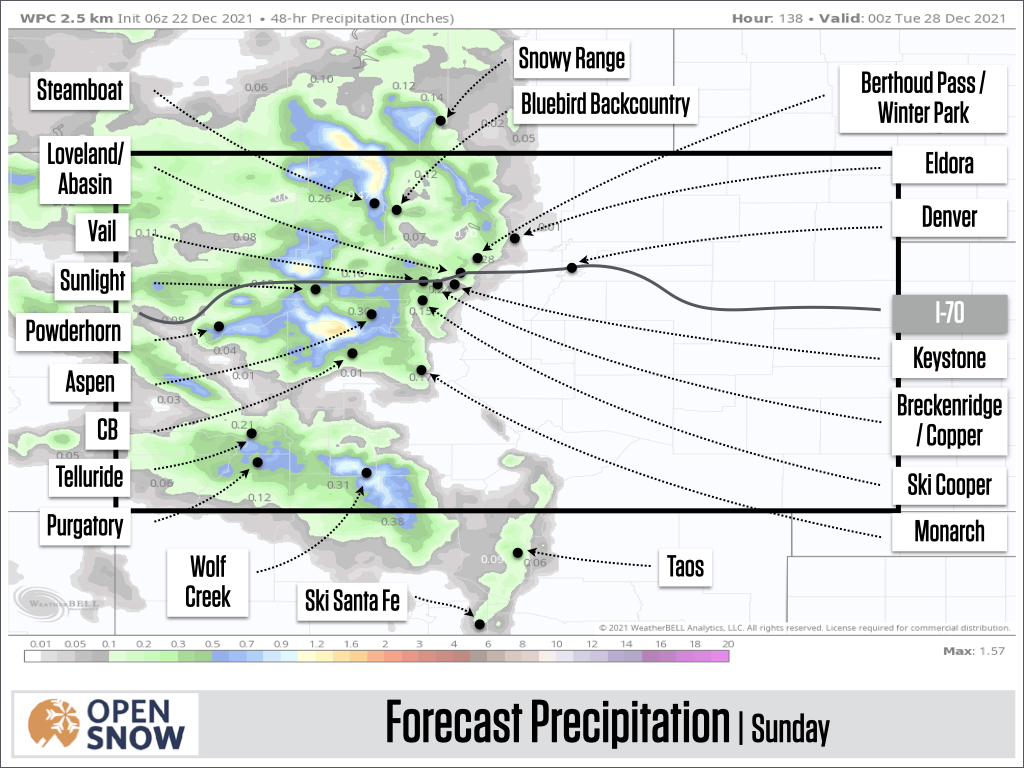 This storm should be more of a quick hitter with snow falling from later Monday through early Tuesday morning. Temperatures will be colder than previous storms, and while this will limit snow accumulations due to more limited moisture in the air, the colder temperatures will also create fluffier snow.

Once again, the precipitation forecast map for this storm looks similar to the previous storms with amounts favoring areas to the west and south. 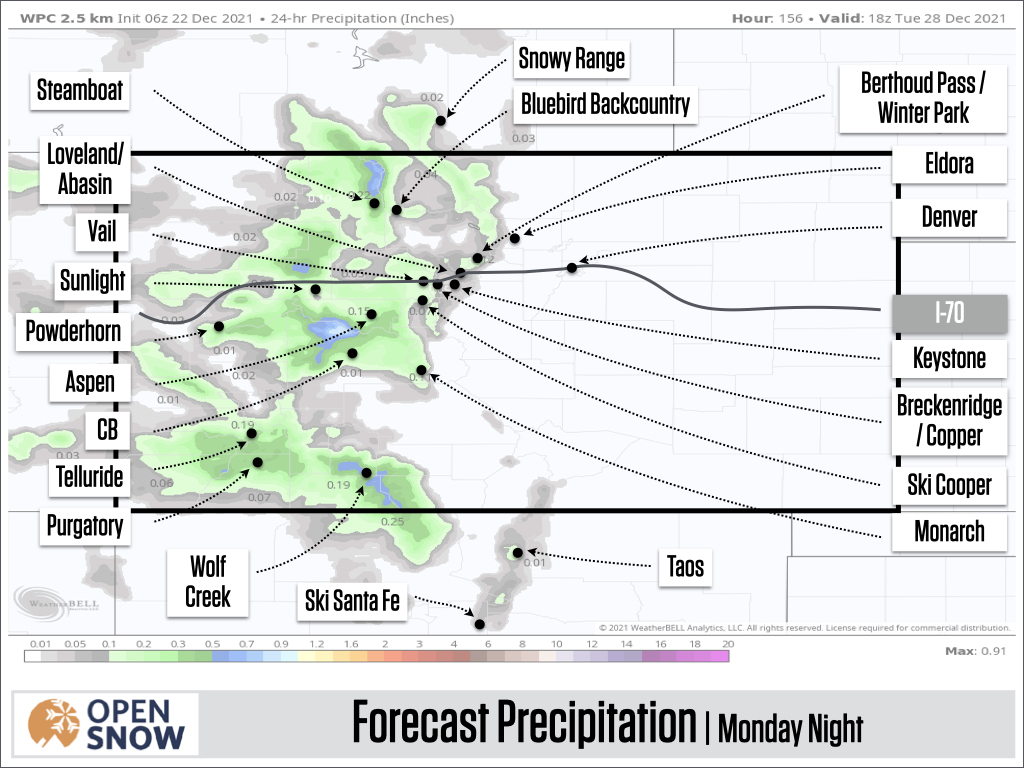 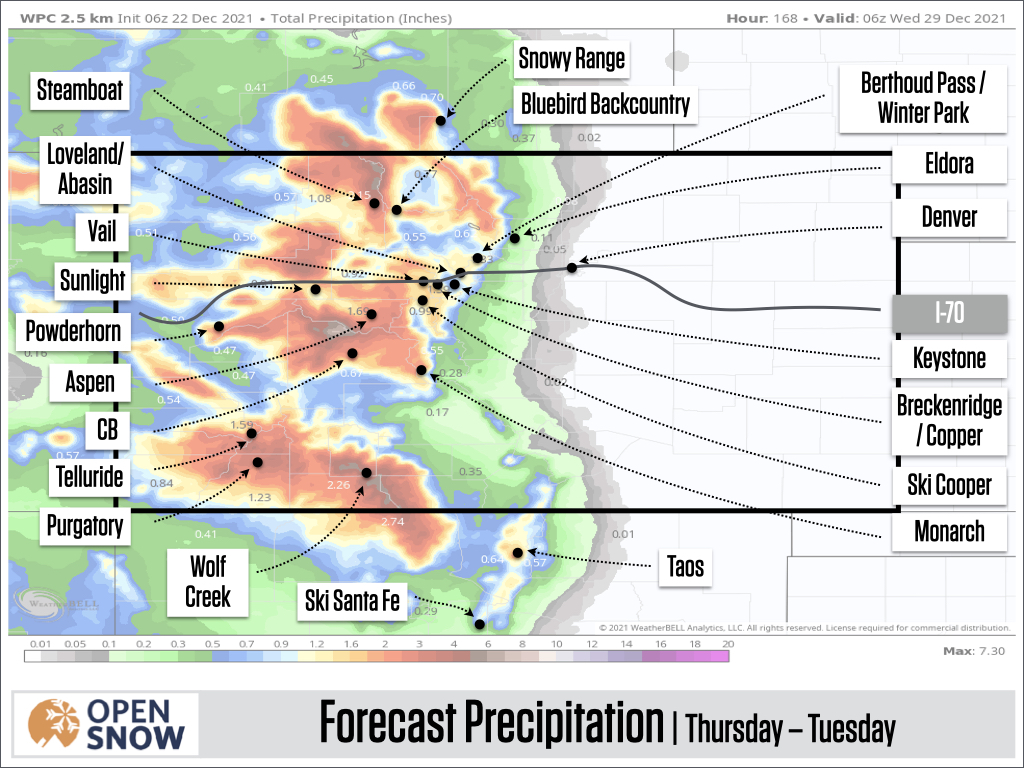 And there will likely be two more storms later next week.

This is an exciting storm cycle. We need the snow to open more terrain and to add to our water supply, and the next 7-10 days are going to deliver.

I am sure that there will be both high-side and low-side surprises in the snow accumulations, but overall, there is a lot of snow heading our way and this is going to be a fun end to 2021.

As always, if you're heading into the backcountry, PLEASE consult the avalanche forecast and think critically about terrain selection. Big snow totals with a lot of water content will mean rapidly changing avalanche risk.

Join me on YouTube Live on Wednesday, December 22 @ 700pm

I'll answer your questions (last time there were 40+ questions) and talk in detail about the upcoming storms. I share my screen during the entire live discussion and use graphics to visually explain the forecast. The last session was super fun and I hope that you can join this one. The screen is just me presenting, so there's no need to show your potentially unkept-mid-winter-disheveled face – just pop by to listen and watch:-)