It's about to begin! 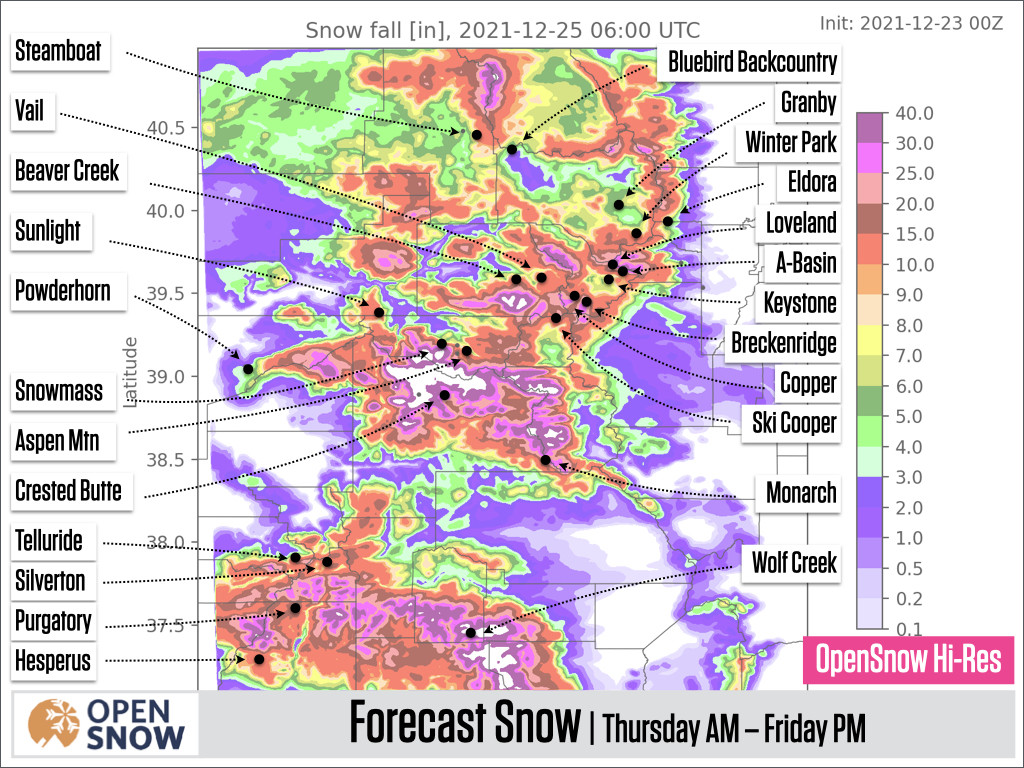 Thursday will bring some snow, and then intense snow will fall from Thursday night through Friday night. All signs are pointing toward a lot of snow for all mountains, with 10-20 inches for non-favored areas and 20-40 inches for favored areas. Friday and Saturday morning should offer the deepest snow (the snow quality will be dense). And after that, we still have 4+ more storms on the way…

The beginning of an amazing storm cycle is almost here.

But before getting to that, here's a quick story about taking advantage of (most likely) the last dry and sunny day of December.

I grew up skiing at Shawnee Mountain, a 700 vertical foot ski area in northeast Pennsylvania. Until I was in college and took trips out west, I had no idea that big ski areas and deep powder days even existed. So I have a deep appreciation for the smaller ski areas that often don't make headlines.

That's part of the reason why, on Wednesday, my family and I chose to go to Ski Cooper. My wife and I were with our 4-year-old son as well as a few family members of his grandparents generation, and we were all able to cruise around for a couple of hours of stress-free skiing. 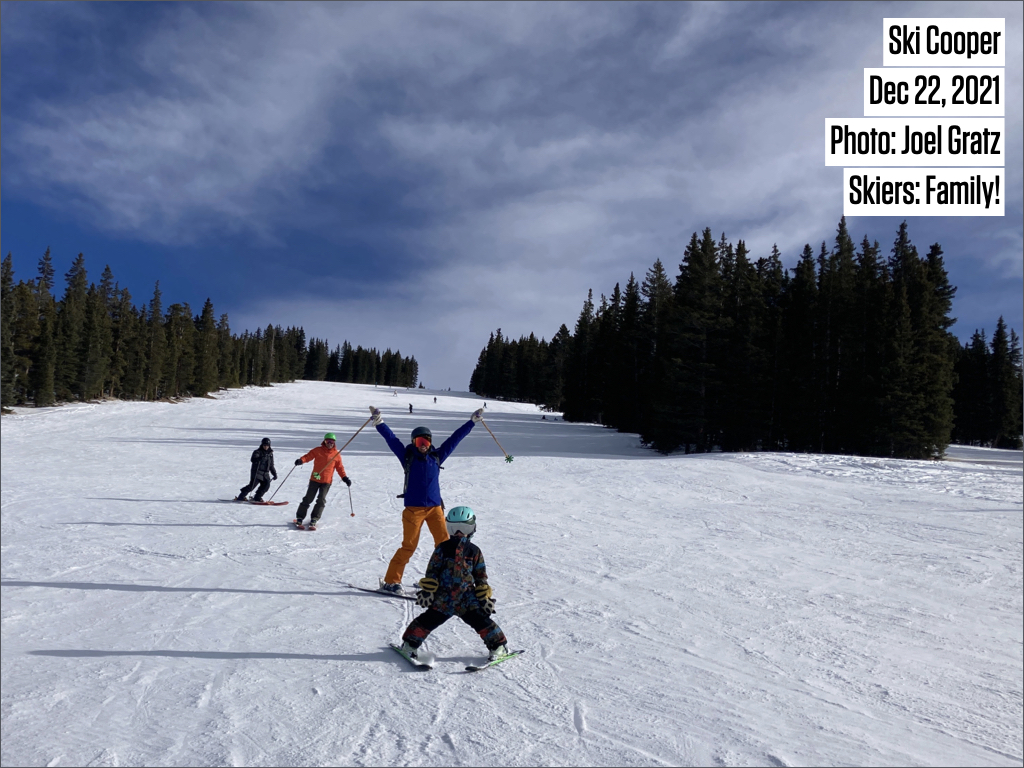 There were a healthy number of people around the base area and the beginner area, yet there were zero lift lines and uncrowded trails. The trails were so uncrowded, in fact, that most of the time, we were the only people in sight. 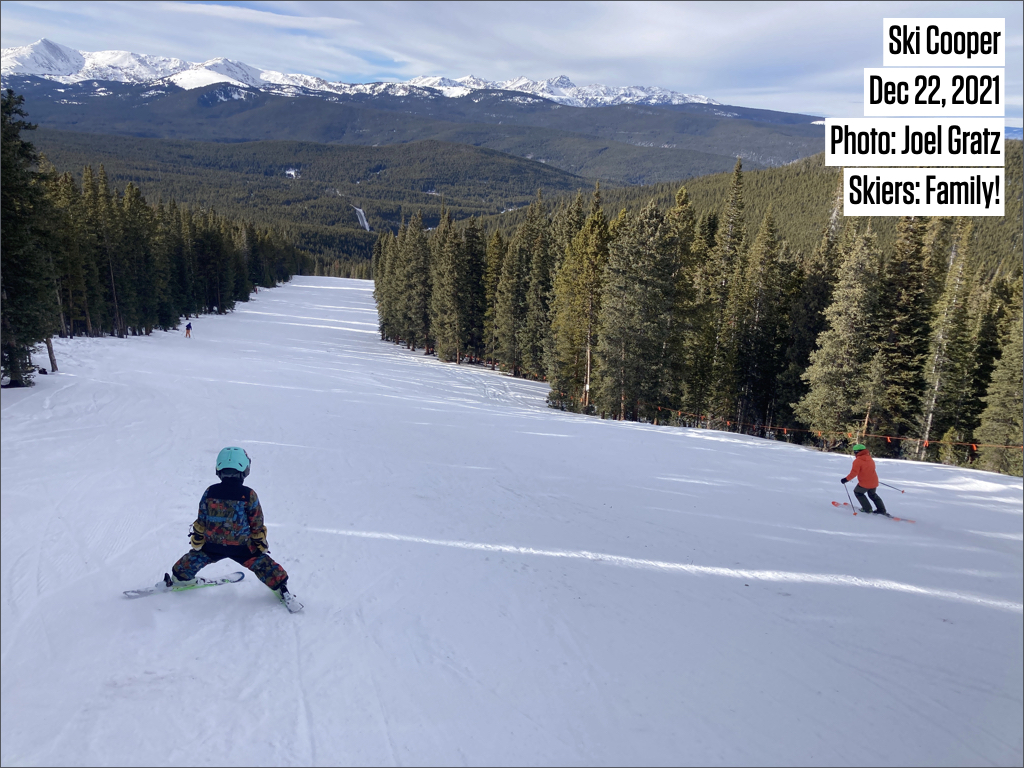 Ski Cooper does not make snow, so the snow surface was all-natural, and that generally meant no ice and grip-able groomers. It was fun stuff for all generations!

There are great reasons to ski/ride all of the mountains here in Colorado, from bigger to smaller. On Wednesday, we enjoyed a wonderful day at one of the smaller mountains, and I wanted to share our experience because it's usually just the bigger, well-known mountains that make the headlines.

Thursday will be the start of a storm cycle that could/should bring snow every day starting on Thursday and lasting a week or longer and into early 2022. Within this storm cycle, there will be at least four or five stormier days/periods and I'll break down each period below. A lot of this post will be similar to yesterday's update because the forecast hasn't changed that much, but there are some notable updates as well that I've highlighted in red.

For all of the storms mentioned below, the mountains farthest to the south and west have the best potential for the most snow due to the wind direction generally from the southwest, west-southwest, and west.

The Crested Butte and Monarch areas can do VERY well with a wind from the west-southwest but models struggle sometimes to forecast this exact wind direction. If we get this wind direction for a longer duration, watch out for higher totals for these areas.

For the mountains close to I-70, these areas will likely get less snow than other areas, but their snow totals will still be significant. And our latest high-resolution modeling shows higher-than-expected totals for the higher elevations around Summit County, so this region could also wind up doing very well.

This will be the storm with the most snow, but due to warmer temperatures and wind, the snow quality might not be the best of all storms. No matter, this will be a great system to kick off our stormy period.

Thursday probably won't bring much accumulation, but waves of intense snow on Thursday night, Friday, and Friday night will make up for it.

Also, temperatures will be cold enough that most ski areas will see all snow, but just barely, with a rain/snow level fluctuating around 8,000 feet. I would not be surprised to see some rain at lower base elevations especially when the precipitation is not falling as heavily. That said, for most terrain that we ski/ride, the precipitation will fall as snow.

The snow forecast below is from Thursday morning through Friday night. Based on this model, and others, I increased my snowfall expectations to 20-40 inches for Favored Areas and 10-20 inches for Not Favored Areas. 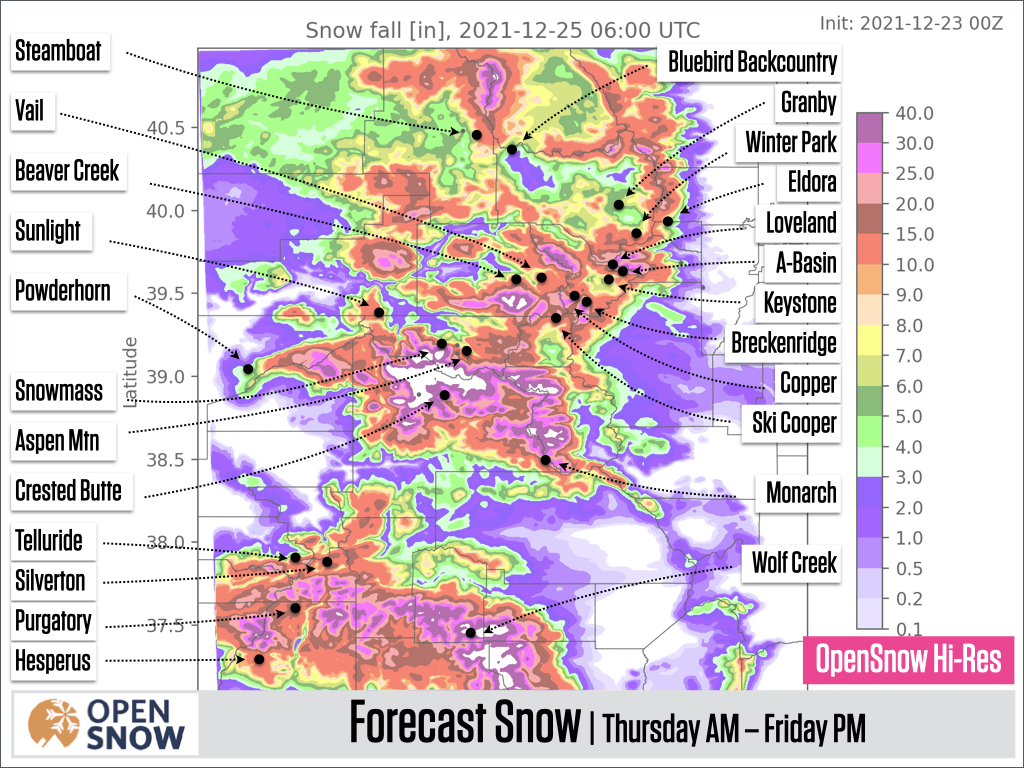 Something that caught my eye in our model above is that the higher elevations of Summit County (Copper, Breckenridge, Keystone, A-Basin, Loveland) could see pretty high totals of 15+ inches. While Summit County is not favored by a wind from the southwest or west-southwest, I have seen past storms like this one, with warm air, a lot of moisture, and a wind from the west-southwest, drop higher-than-expected snowfall on this region. Both our 1km model and the CAIC 2km model indicate that Summit may do better than I originally expected during this storm.

In general, the snow amounts shown above (and below) are silly high, but the forecast is supportable due to a LOT of moisture heading our way and storm energy that will be tracking over Colorado for 24-30 hours. Sometimes models have a high bias when there is this much moisture along with warm air, but all of the data that I've looked at supports snow amounts between 1-3+ feet for most areas, so I am allowing myself to get excited. The caveat is that with the warmer temperatures, these significant accumulations will likely be focused at the middle and higher elevations, which is fine because that's where most of us ski and ride, but I just wanted to point out that lower elevations and valleys could feel like they 'missed' the storm with lower snow totals.

To round out Storm #1, below is the NWS multi-model snow forecast. Yes, that's a lot of snow for a lot of areas. 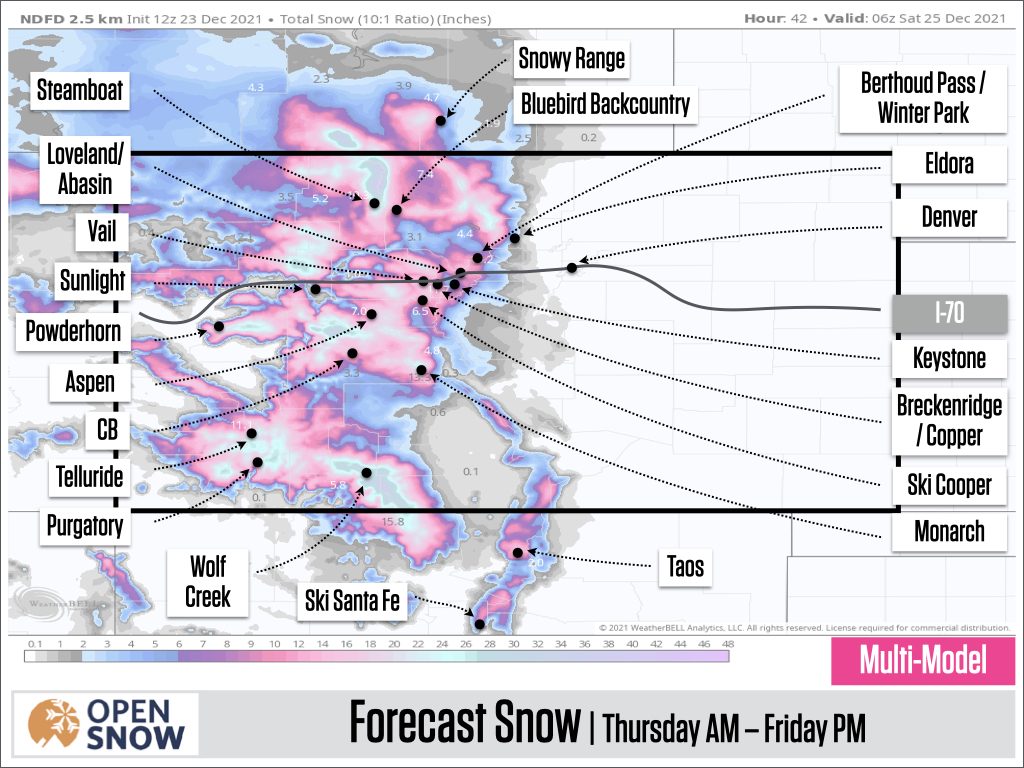 As if the storm from Thursday night to Saturday morning wasn't exciting enough, there are more storms heading toward Colorado.

I'm not going to add any changes to the forecast at this time.

This storm should provide a refresh, and the snow quality will be fluffier thanks to somewhat cooler temperatures. Sunday could be a stormy day with freshies left on Monday morning.

Rather than a quick hitter with snow from Monday afternoon to Tuesday morning, this storm now has the potential to last longer throughout the day on Tuesday. This could mean powder skiing and riding all day on Tuesday.

Temperatures will be colder than previous storms, so the snow quality should be fluffier. With fluffier snow falling on top of multiple feet of snow that fell on previous days, Tuesday could shape up to be a really fun day.

This part of the forecast is still uncertain regarding the timing and the track of the storms. It is VERY likely that we'll see at least a few days with snow between Wednesday, December 29, and Sunday, January 2, but I don't want to discuss details yet as there is no consensus among most models.

This is an exciting storm cycle. We need the snow to open more terrain and to add to our water supply, and the next 7-10 days are going to deliver.

I am sure that there will be both high-side and low-side surprises in the snow accumulations, but overall, there is a lot of snow heading our way and this is going to be a fun end to 2021.

As always, if you're heading into the backcountry, PLEASE consult the avalanche forecast and think critically about terrain selection. Big snow totals with a lot of water content will mean rapidly changing avalanche risk.